Home Watches On Your Bike: Watches & The World Of Professional Cycling

The sport of professional cycling and the business of luxury horology have always had an erratic, capricious, inconsistent relationship. Sometimes enthusiastic and glorious, other times fractious and indifferent, and, just occasionally – but significantly – fraught with controversy and toxic association. Back in the Nineties, when a recognised marque ventured into the sponsorship of a pro racing team, it ended in disaster.

Festina – founded in 1902 in La Chaux-de-Fonds, Switzerland, but relocating to Barcelona, Spain during World War II – had a company motto; ‘Festina Lente’ (hasten slowly). Hardly a phrase that one would immediately affiliate to the cut and thrust of athletic sports sponsorship, but that didn’t stop Festina giving its name to a pro cycling team. First, in 1990 as the Spanish Lotus-Festina/Festina-Lotus. Then, in 1995, as the French team ‘Festina’.

At the beginning of the partnership things went rather well – in 1992 the team signed the great Irish cyclist Sean Kelly, who immediately triumphed at the prestigious Milan-San Remo. By 1998 Festina was a major force in the annual Tour de France. With world champion Laurent Brochard as support, the team’s young gun, French rouleur Richard Virenque, was favourite to win the fabled yellow jersey. Then… scandal. Disgrace. Public shame. A global PR disaster.

During the race, France-Belgium border officials searched the Festina team car and discovered large quantities of doping products (EPO). All members of the tour team were arrested and Festina was banned from the event the French call ‘La Grande Boucle’. In an attempt to save face and take positive action, Festina set up the Fondation d’Entreprise Festina to promote anti-doping in cycling. Festina is no longer directly involved with cycling employing – instead, the action movie star Gerard Butler is its brand ambassador.

Now, almost 20 years on from the Festina scandal, and after two long decades of the watch industry investing its vast pools of sponsorship budget money in the same, tried and tested, culturally safe, controversy-free sporting arenas of F1, tennis, golf and sailing, the industry is beginning to invest in pro cycling once more.

Announcing a global agreement with RCS Media Group at the beginning of the 2017 season, TAG Heuer colours are now flying at races such as the Giro d’Italia, the Strade Bianche, the Tirreno-Adriatico, the Milano-San Remo, the Milano- Torino, the Gran Piemonte and the Tour of Lombardy. In total, 10 major races from the UCI international calendar are now on TAG Heuer time. The presence of the Swiss watch brand is signalled with high visibility at all events (think panel advertising at the start, finish and along the routes, TV adverts and even on team vehicles during time trials). TAG Heuer also announced its sponsorship of the BMC Racing Team, with the Dubai Tour and the Abu Dhabi Tour races already working with the brand. 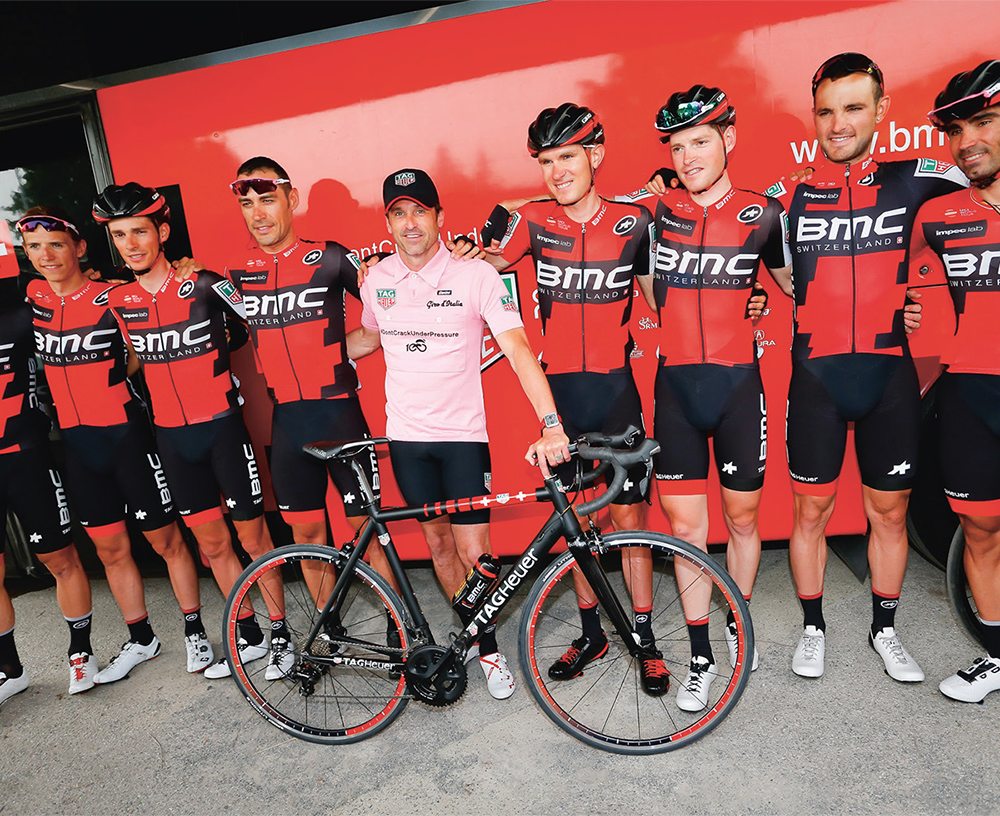 Make no mistake – this is a big moment for cycling… and TAG knows it. “The winds of change are blowing through professional cycling,” the Swiss brand’s press release announced grandly. “The appointment of luxury brand TAG Heuer as Partner of RCS Media Group is highly symbolic: it represents the desire of two men, two company heads, two exceptional leaders, Urbano Cairo, President & CEO of RCS Media Group, and Jean- Claude Biver, CEO of TAG Heuer and President of the LVMH Group Watch division, to breathe new life into the world of cycling.

“Cycling is a universal, international sport, the popularity of which bridges the age gap,” continues Jean-Claude Biver. “I have big plans for our involvement in this ever-growing sport, which offers us a unique marketing platform with fantastic visibility throughout the world.”

TAG Heuer isn’t the first watch brand to associate itself with the pink jersey of Italy’s greatest race – and with the wider world of cycling. As far back as 1956, Breitling issued its Venus 188 Chronograph Giro d’Italia 1956 Charly Gaul Vintage Traumuhr, a lovely example of old school sports (steel and rose gold) that now goes for up to £3,000 at auction. Subtly engraved with the words ‘Giro d’Italia’ on its dial, the watch celebrated Luxembourg-born super climber Charly Gaul’s victory at the Giro. Gaul went on to win four stage victories at the Tour de France in 1958 and won the Giro again in 1959. Pop star looks earned him a nickname ‘the angel of the mountains’ – all good PR for Breitling.

An honourable mention must also go to Giovanni Battaglin, a magnificent climber whose aggressive style made him something of an anti-hero at the Giro and the Vuelta in 1981. Again and again Battaglin attacked the legendary Eddy Merckx on the big hills, complete with a gold Rolex dangling off his wrist.

Swiss-born Fabian Cancellara’s nickname is ‘Spartacus.’ Now retired from pro cycling he’s a multiple stage winner at the Tour and the Spanish Vuelta and had victories at both the Tour of Flanders and the Paris-Roubaix. Perhaps believing controversy to be less likely at the back end of a pro’s career, IWC made Cancellara “a friend of the brand” for his final few seasons in the saddle. During his last couple of Tours he was spotted wearing, variously, a Big Pilot Perpetual Calendar, an Aquatimer Chronograph Galapagos Edition and the titanium Ingenieur Double Chronograph.

Actually, the Schaffhausen’s association with cycling goes back much further. In 1981 Belgian track legend Patrick Sercu, who bagged three world titles in the sprint discipline, an Olympic gold for the 1km time trial in 1964 and won the green jersey at the 1974 Tour de France, was the starring act for IWC–Eddy Merckx, a one-man team (consisting of just Sercu) that boldly wore the IWC logo on its jersey.

IWC now sponsors the ultra cycling race Tortour. Billed as “the biggest multiday non-stop ultracycling event in the world,” the race is 1,000km-long, taking in several Alpine passes. Cyclists and crews ride non-stop, over two days, either solo or in a team. Tortour (yes, it’s meant to sound like torture) starts and finishes in Schaffhausen, Switzerland, AKA IWC HQ. 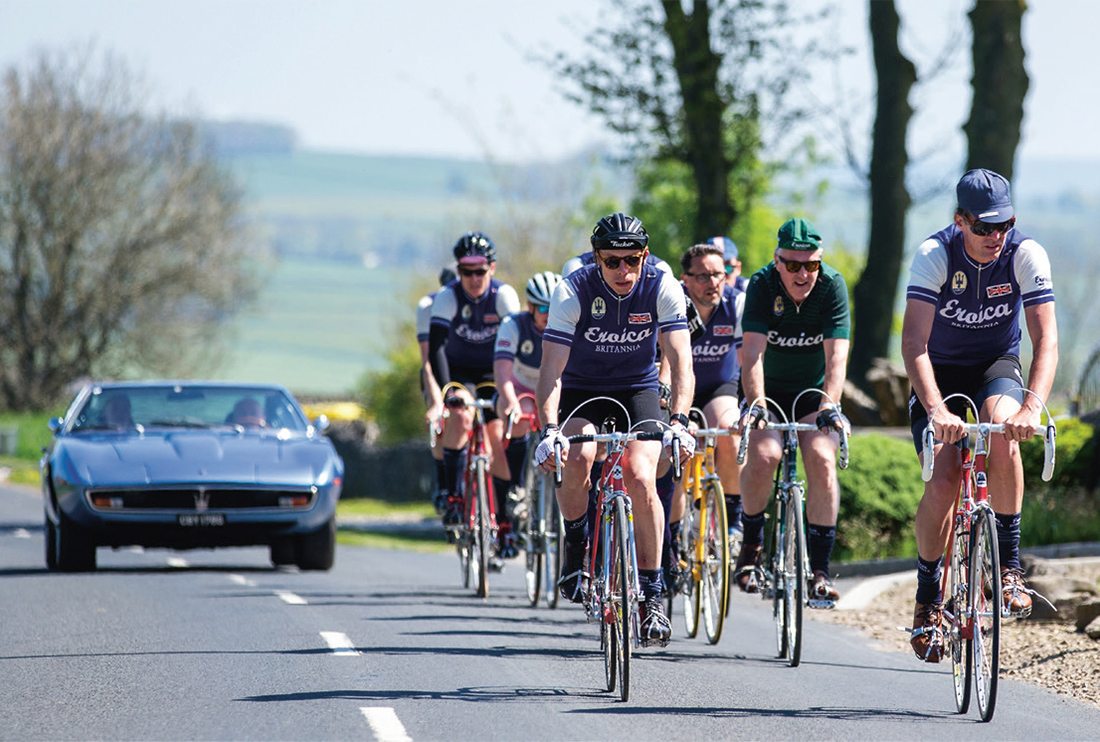 David Millar, the stylishly attired ex-pro and former GB team captain at the Olympic Games – and who now commentates on the Tour de France for ITV – is not surprised that the luxury goods industry is finally waking up to cycling’s myriad sponsorship potential. “There are very few sports left that tread the fine line between old school romanticism and modern appreciation,” he says. “Cycling, somehow, does. It has a massive level of participation and although that indicates an inclusivity, there is, within that number, a discerning type of person who also appreciates its exclusivity.” Now sponsored by both Maserati and the Jumeirah Hotels group, Millar hosts global, cycling-related events and programmes for both brands. “Only a few years ago neither Maserati or Jumeirah would have ever even considered cycling as a marketing tool,” he says. “Now they count it as one of their most influential vehicles for raising brand awareness to a prime demographic.” David Millar, by the way, wears a vintage Rolex when he’s on his bike. Introducing: A New Look for the Breguet Classique 7337