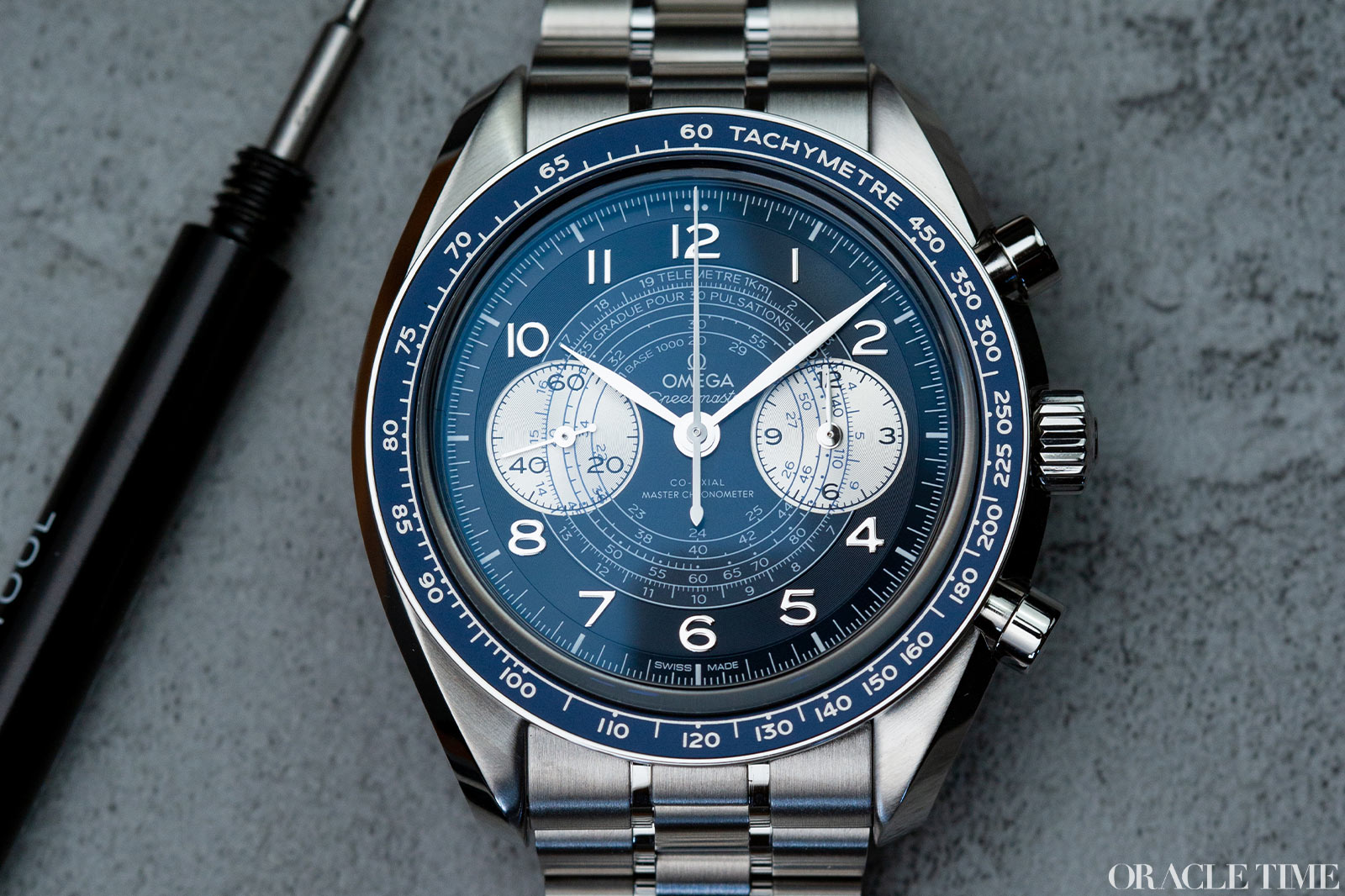 I love a good scale. Other than yellow dials it’s kind of my thing. Tachymeters have that racing heritage, pulsometers some vintage flair, telemeters… are around. They all have their (largely redundant) uses and they all look cool in different ways. That first has been around plenty, but these days both pulsometers and telemeters are making a bit of a comeback among all the retro vintage throwbacks appearing at the moment.

Not to be left out, Omega has decided to outdo the competition with their new release. But which do you go for when designing a watch? Which scale do you choose? To whichever question Omega answers, ‘yes.’ The Omega Speedmaster Chronoscope has it all. 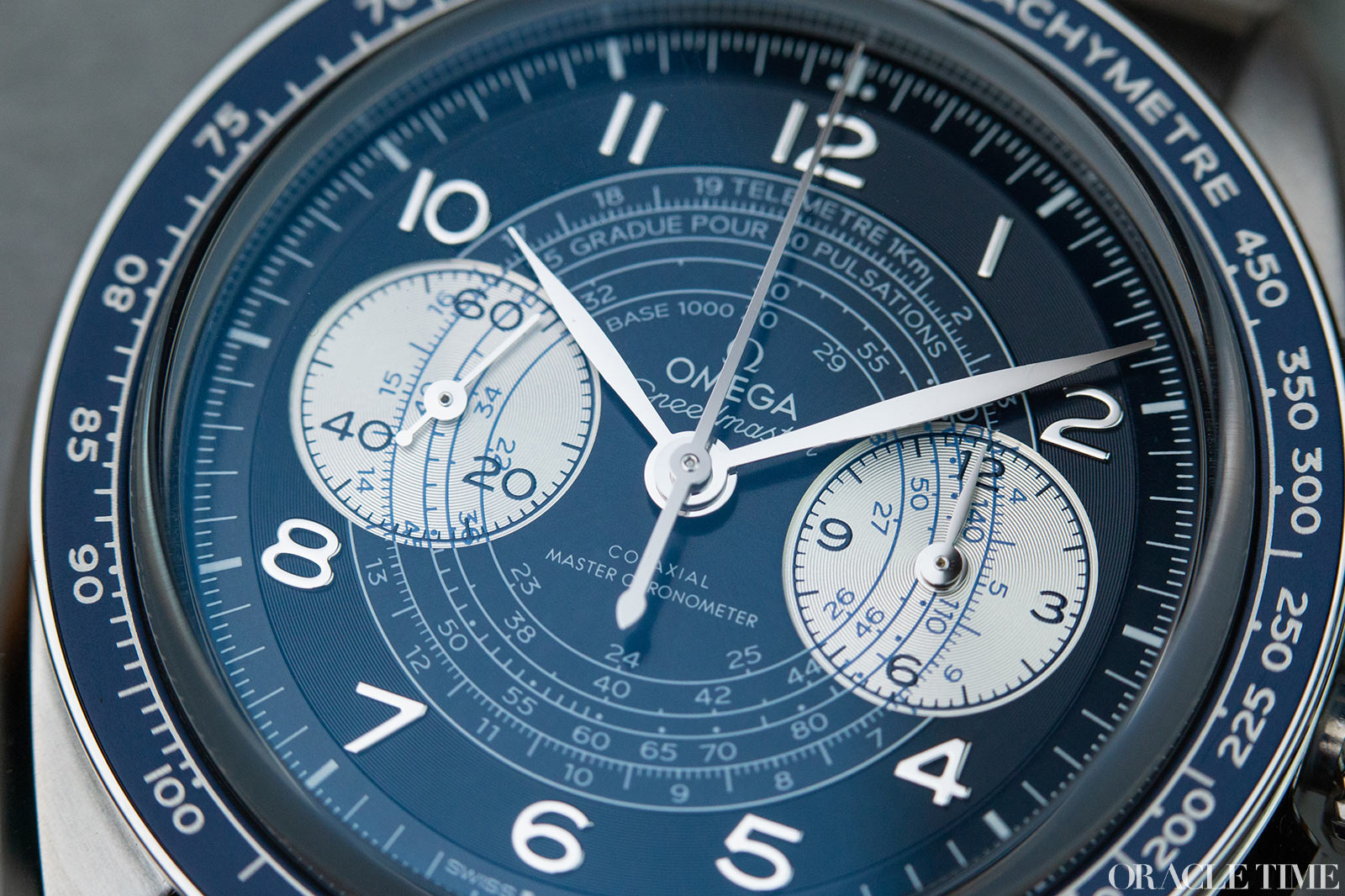 Tachymeters are obviously nothing new to Omega; with the advent of the Speedmaster they were the first brand to mount the speed over distance scale on the bezel and it’s been a defining element of the collection ever since, including here. But the watchmaker’s been making chronographs for far, far longer than that, a history that the Chronoscope is a fitting tribute to.

At the centre of the dial there are three different scales. There’s the repeat of the Tachymeter in the middle, at the below 60 mark missing off the bezel scale; then there’s the telemeter, furthest out which measures distance based on the speed of sound in the middle. Finally, nestled between the two, is the pulsometer which is relatively self-explanatory (it measures a pulse).

There are four different dial variations available (which you can find out more here): a classic Panda, a version that switches the black for blue and this, which I guess you could call a reverse blue panda. It’s the most unusual of the three and in my opinion, the most handsome, other than perhaps the bronze gold version if you don’t mind the substantial price uptick. 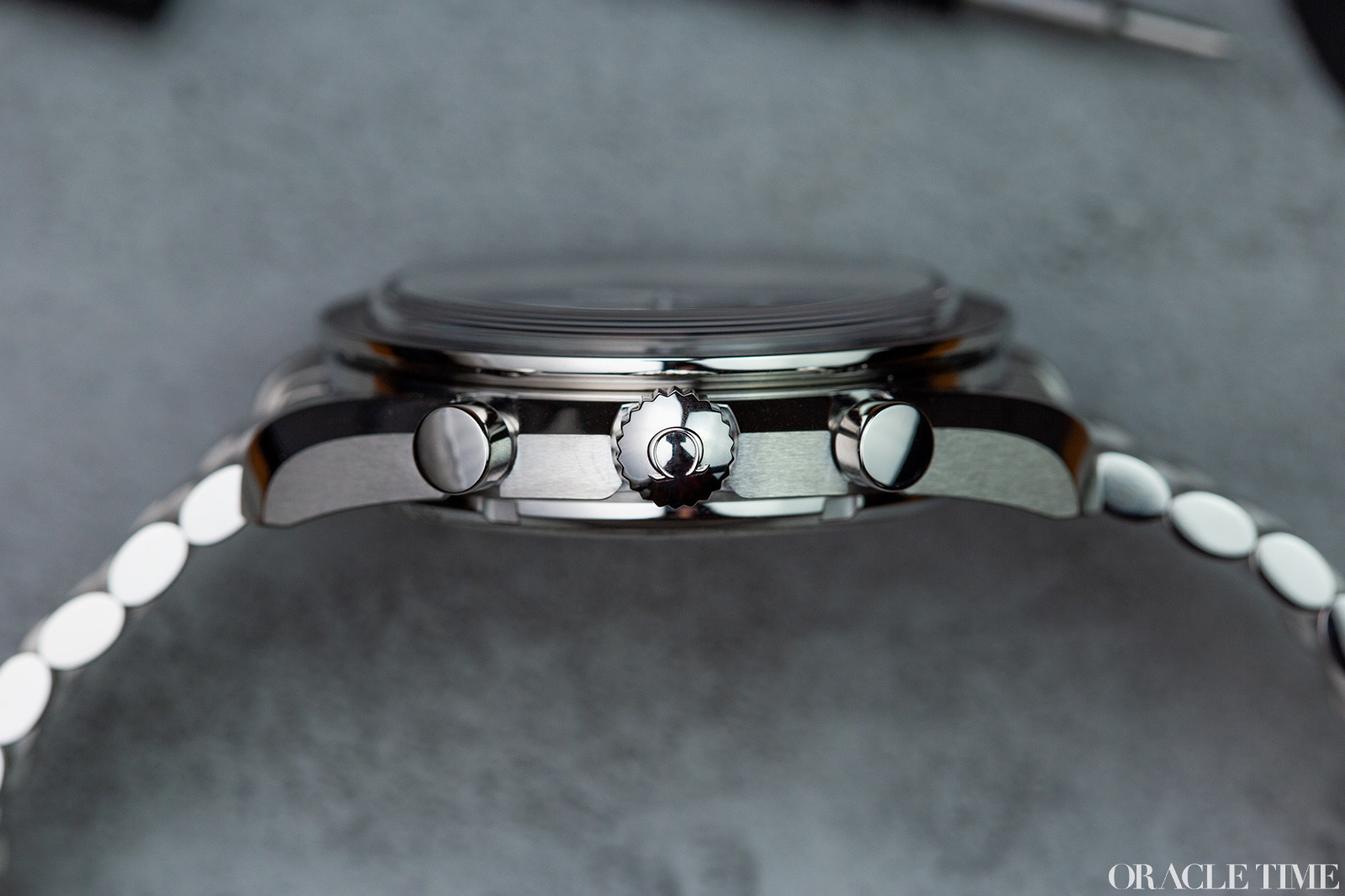 All four pieces have an upsized, 43mm case, which while a small change on paper does feel a fair bit bigger on the wrist. I like it but Speedy devotees might not. It’s paired with a shiny new bracelet that might be Omega’s best to date. With a slight allusion to the 1980s, the micro-adjustable strap is fantastic, comfortable and precisely machined. Here’s hoping it’s the new standard for Speedmasters. 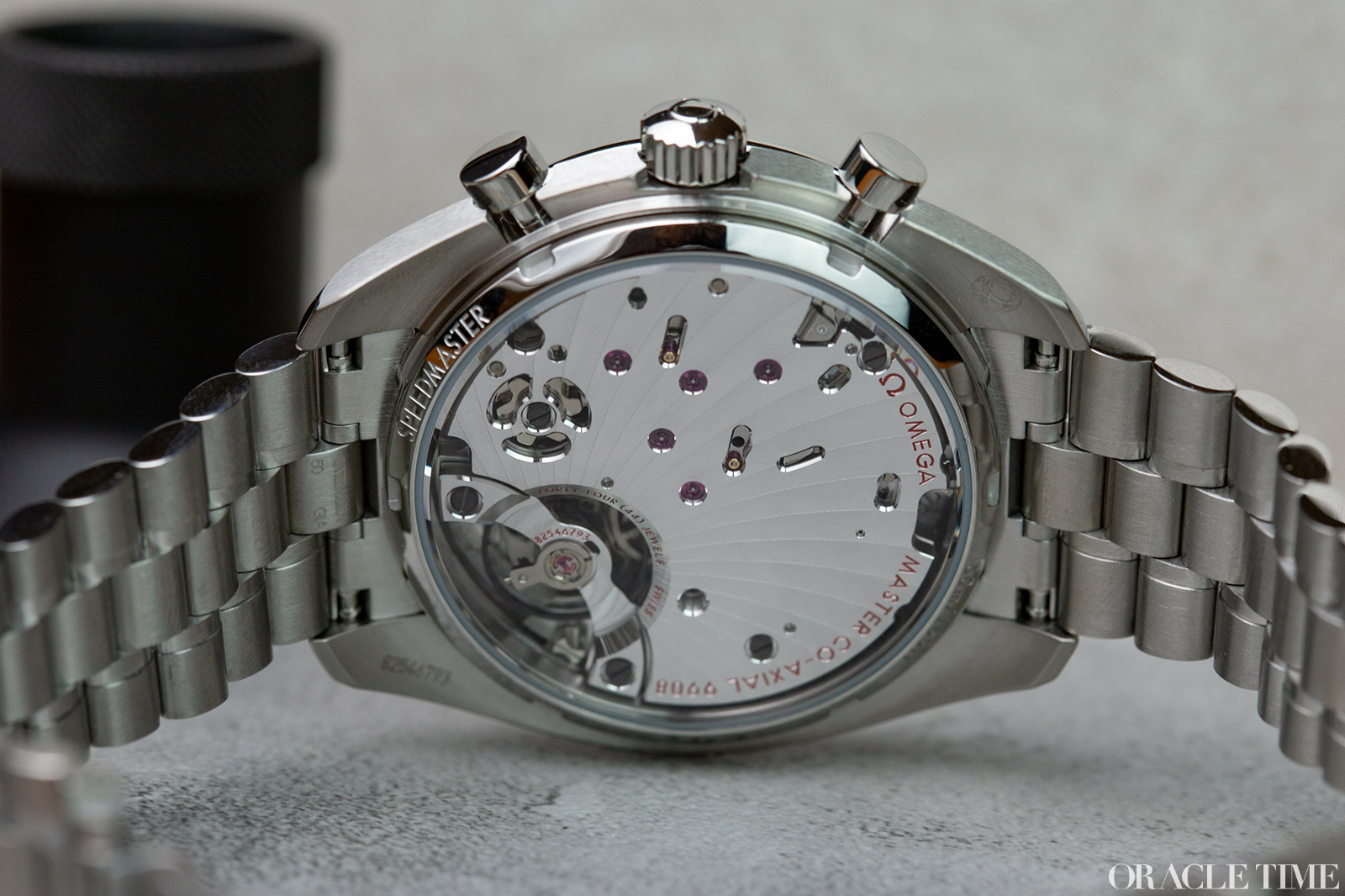 The caseback is downright glorious. The new, manual wind Co-Axial Master Chronometer Calibre 9908 is solid on a specs sheet with the certification that only Omega and Tudor go in for, but it also looks bloody beautiful. Geneva waves across the German-style ¾ plate, red-inlaid lettering and an expansive sapphire crystal to show it all off, it’s a serious piece of work.

So far, so good. But what are the downsides? Well, my main issue with the Chronoscope is the sizing. I don’t mean because it measures in at 43mm; that’s understandable given the amount of information that needs to be displayed. It’s more that Omega don’t seem to have tried to fit too much into it. The scales at the centre of the dial are harder to read than they need to be, and where they cross the chronograph subdials it’s all a bit much. 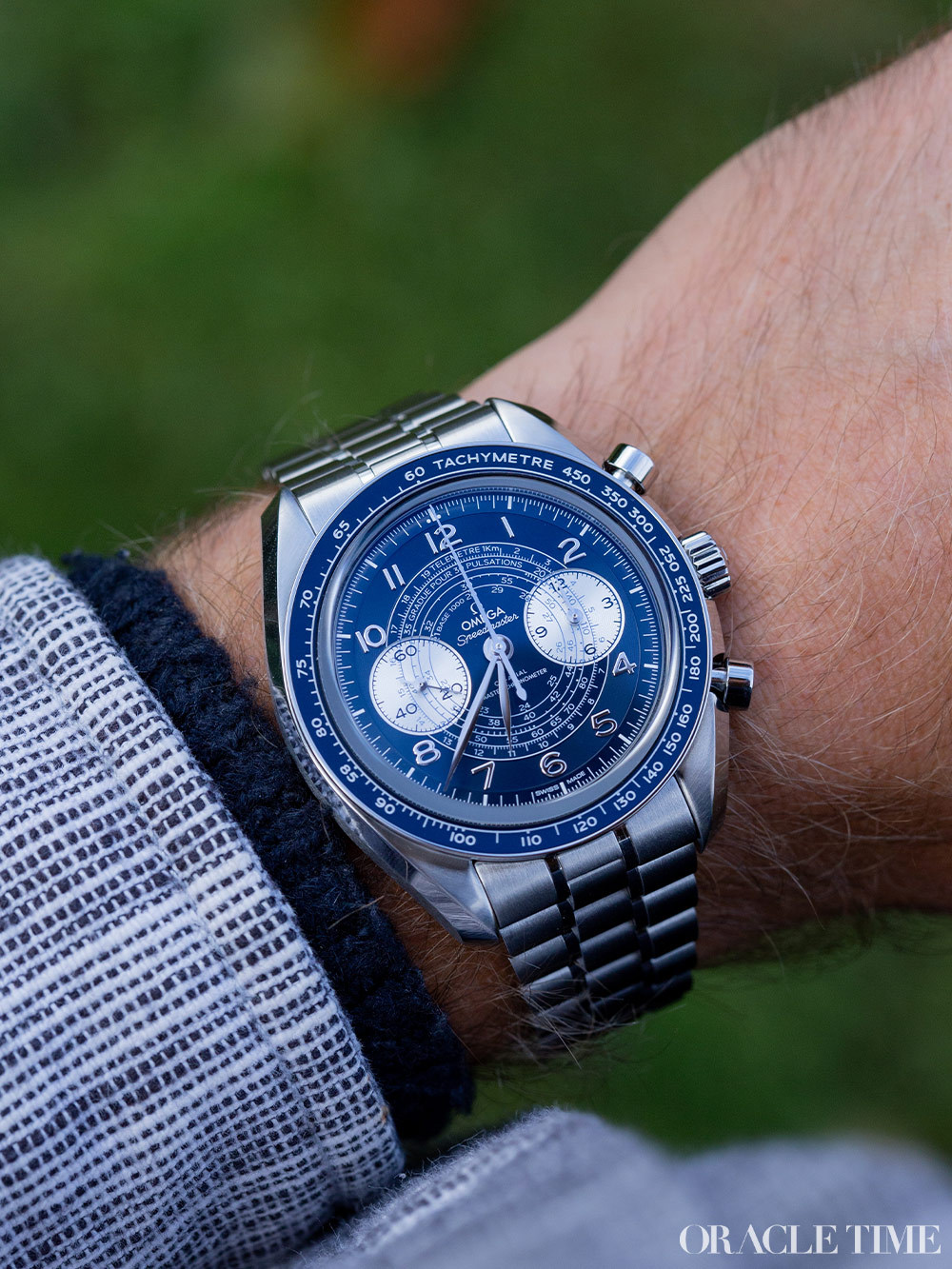 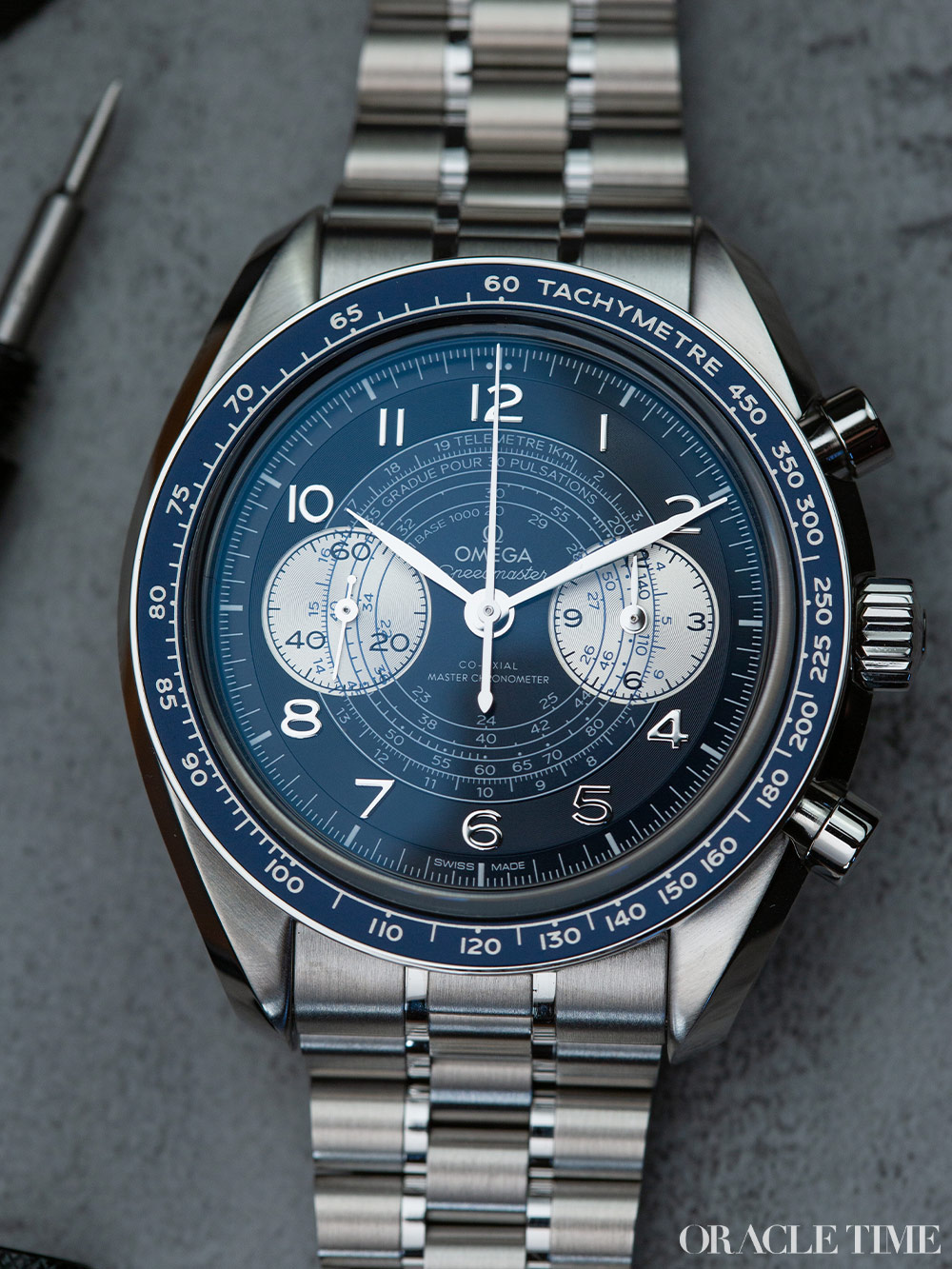 I’m not sure how they could have avoided it. Pushing one to the outer edge would have helped considerably, even if it meant getting rid of the minute track, but that would’ve thrown the aesthetic balance out considerably. I’d have likely ditched the inner tachymeter, but that slightly defeats the Chronoscope’s USP.

Still, that’s not necessarily a downside that most wearers will care about. Sure, you might occasionally use a tachymeter trackside for novelty value, but who actively uses a telemeter or pulsometer? The slightly awkward readability is, when you get down to it, a non-issue.

Overall, I love the look of the Omega Speedmaster Chronoscope. The contrast subdials, the rings of numerals, even the throwback leaf shaped hands are magnificent. It’s like all of the Breitling Premier Heritage chronographs distilled into one.