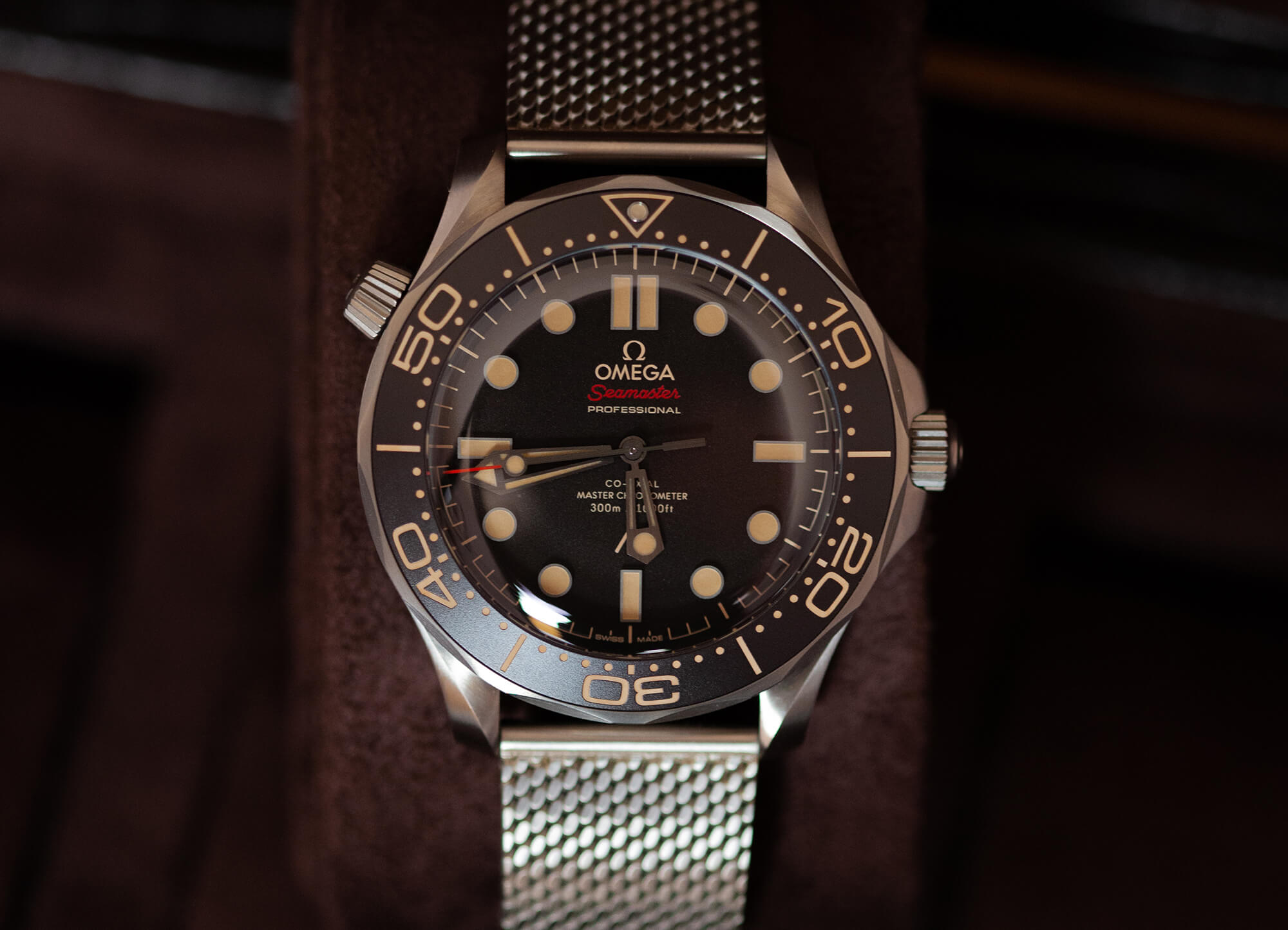 While the 25th instalment of the unstoppable franchise may be delayed until November 2020, the watch that will be decorating Daniel Craig’s (reluctant) wrist has already hit markets.

Despite No Time to Die being the ninth film under Omega’s product placement stewardship, it will be the sixth time the Omega featured will be a Seamaster Professional 300M, with the first appearance being in the iconic Goldeneye on the wrist of Pierce Brosnan. That said, it’s probably most famous for its starring role in Casino Royale: “Rolex?” “Omega.”

For the latest version Omega has brought back the 300m and tailored it to Daniel Craig’s physical, no-nonsense take on the world’s worst secret agent.

The latest Bond watch marks a transition from the 300m water-resistant diver we all know and love into a vintage-style military watch. For that, Omega has dropped the collection’s signature wavy dial in favour of a piece of matte anodized aluminium designed to fade over time, complete with tan indices that glow blue in low light. Between that and the lack of a date window, this new take falls firmly in the field-watch aesthetic.

It’s not just a dial swap either; the seamless sapphire crystal has been swapped out for a vintage-inspired dome, and the strap options reflect the heavy-duty military design roots. That means a NATO strap, but also a titanium Milanese number. 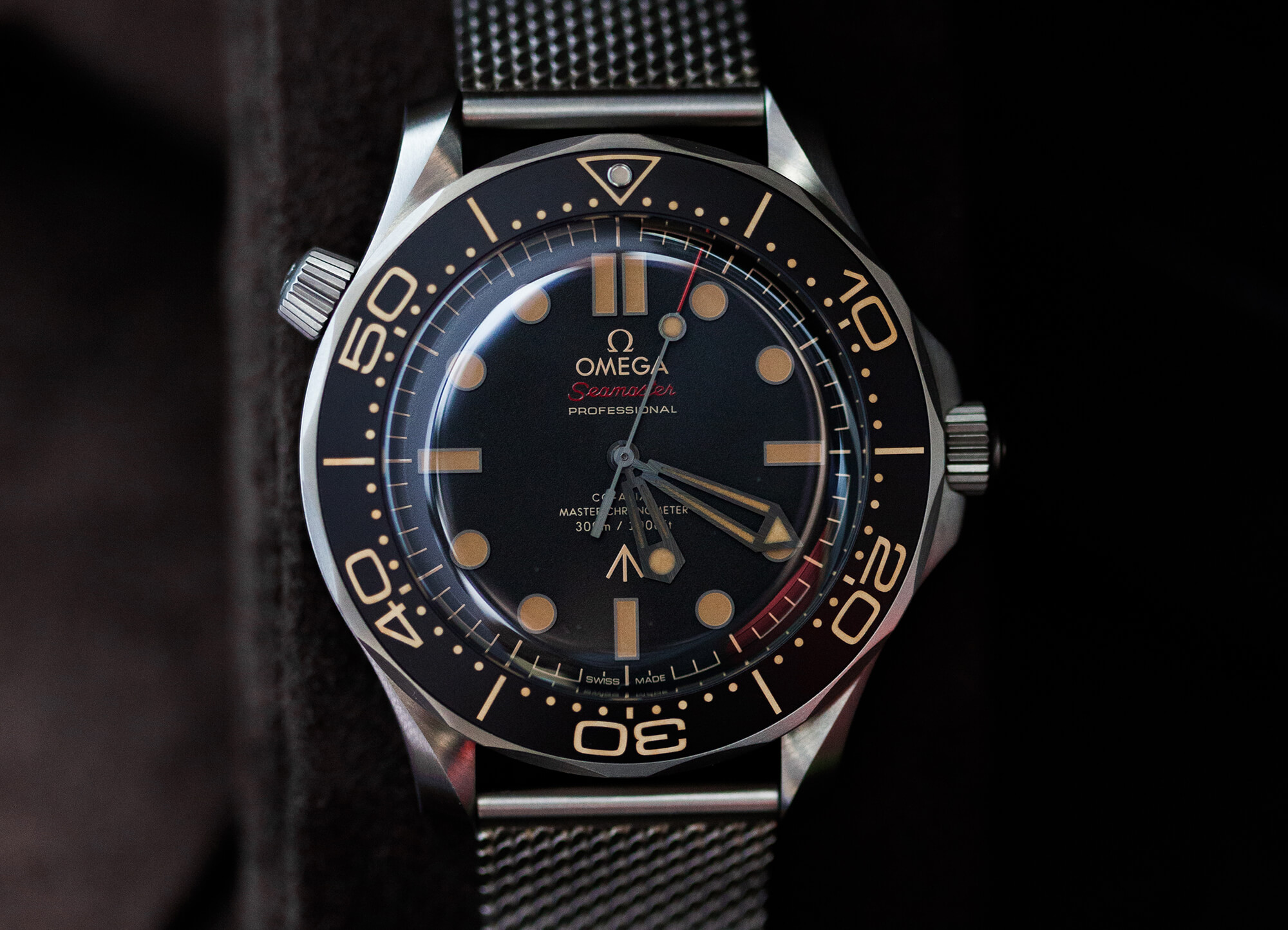 The function over form continues to the case, too, which boasts sand-blasted matte rather than polished surfaces. It’s something you often see in spec ops-designed timepieces where you don’t want a glint of light at the wrong time giving you away. The same goes for the bezel, which switches from ceramic to the same aluminium as the dial, designed to fade at roughly the same rate.

It’ll scratch more than ceramic, but that’s just the kind of wear and tear you want from a functional field watch – you want proof that it’s seen some action. The changes for the latest 007 Edition are far from skin-deep however.

Daniel Craig’s input has never been at the forefront of his character’s timepieces, but he had one stipulation this time: to keep it light. All those hours on set must be taking their toll. Omega kept to that extensive brief by milling the 42mm case out of grade-2 titanium. It’s also slightly squatter than the standard 300m, all the better to slip under a cuff. 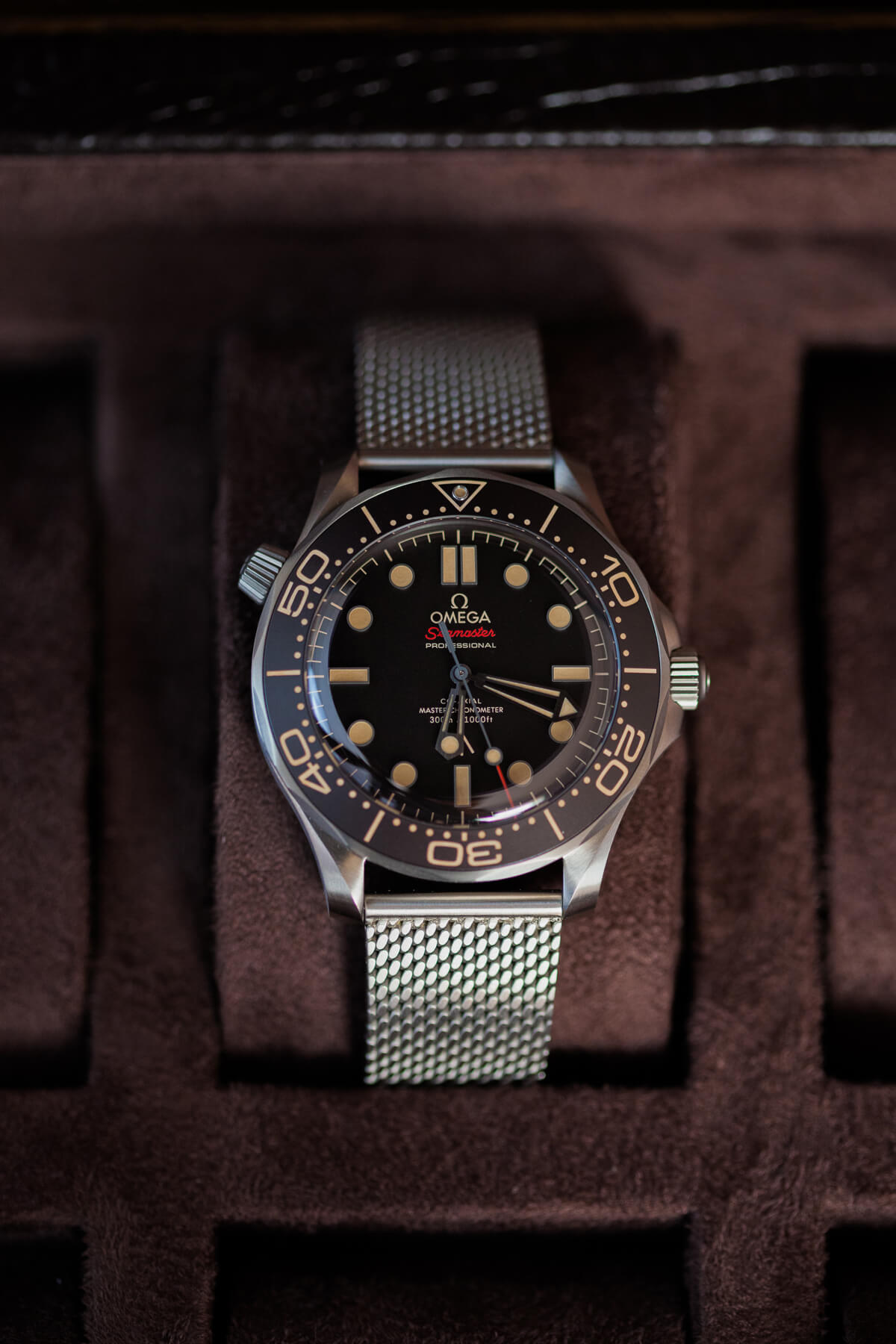 Inside features Omega’s 8806 Co-Axial escapement Master Chronometer featuring a silicone hairspring. That means it’s anti-magnetic up to 15,000 gauss and impressively shock resistant. Add in the patented George Daniels Co-Axial escapement and a 55-hour power reserve and you have a watch even Bond couldn’t accidentally wreck. 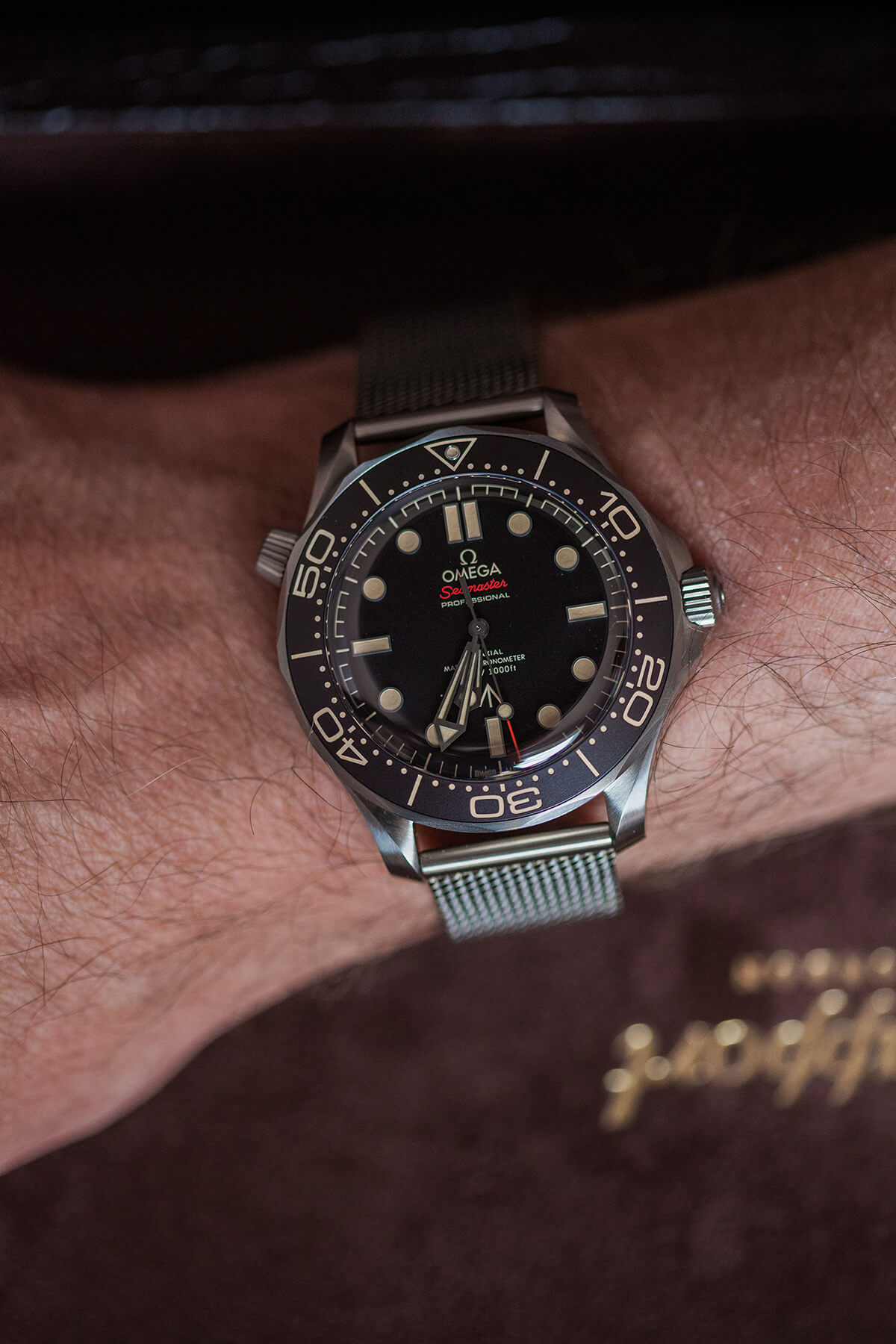 That said, you’ll have to take my word for it as the caseback is solid rather than exhibition. Still, Omega has made it a feature, with an engraved code. That number states that it’s from the Royal Navy, that it’s a diving watch and then two numbers that any Bond fan knows: his agent number and the year Dr. No was released. To hammer home the British connection, the caseback is finished with the Broad Arrow of the Ministry of Defence.

Visually, this is one of the coolest Seamasters ever built. I don’t mind a good diving watch, but I love my military pieces and this threads the needle between the two flawlessly. I’ve never been on board with the wavy dial of the 300m, despite it being the collection’s signature flourish, so having this relatively sparse aluminium version suits me nicely. 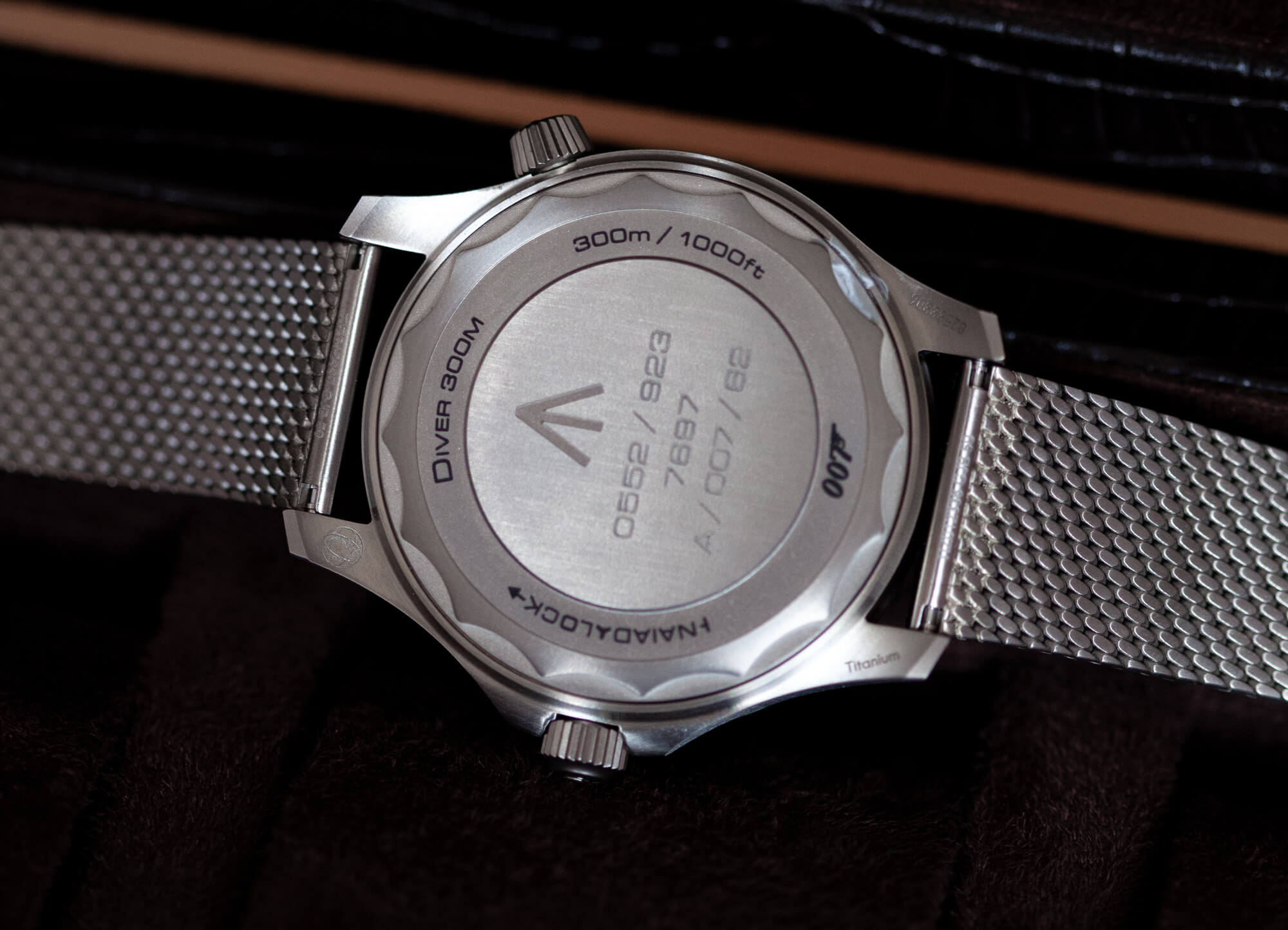 I know the helium escape valve is hit-and-miss with some people, but for me it differentiates the Seamaster from the flood of other divers out there, and I’m glad this more militaristic version keeps that – despite it being unnecessary for all but saturation divers.

In fact, the only downside for me is the price. At £7,000, you’re paying £3,000 over the basic steel version for the new look, case and Bond connection – almost double.
Not that it matters though; as you’d expect, the 007 edition is sold out – though only for now. Unlike previous film tie-ins, this will remain part of the collection until the next film hits. Given that they’ll need to find a new 007 between now and then, prospects are looking good. Let’s just hope the film lives up to the watch.