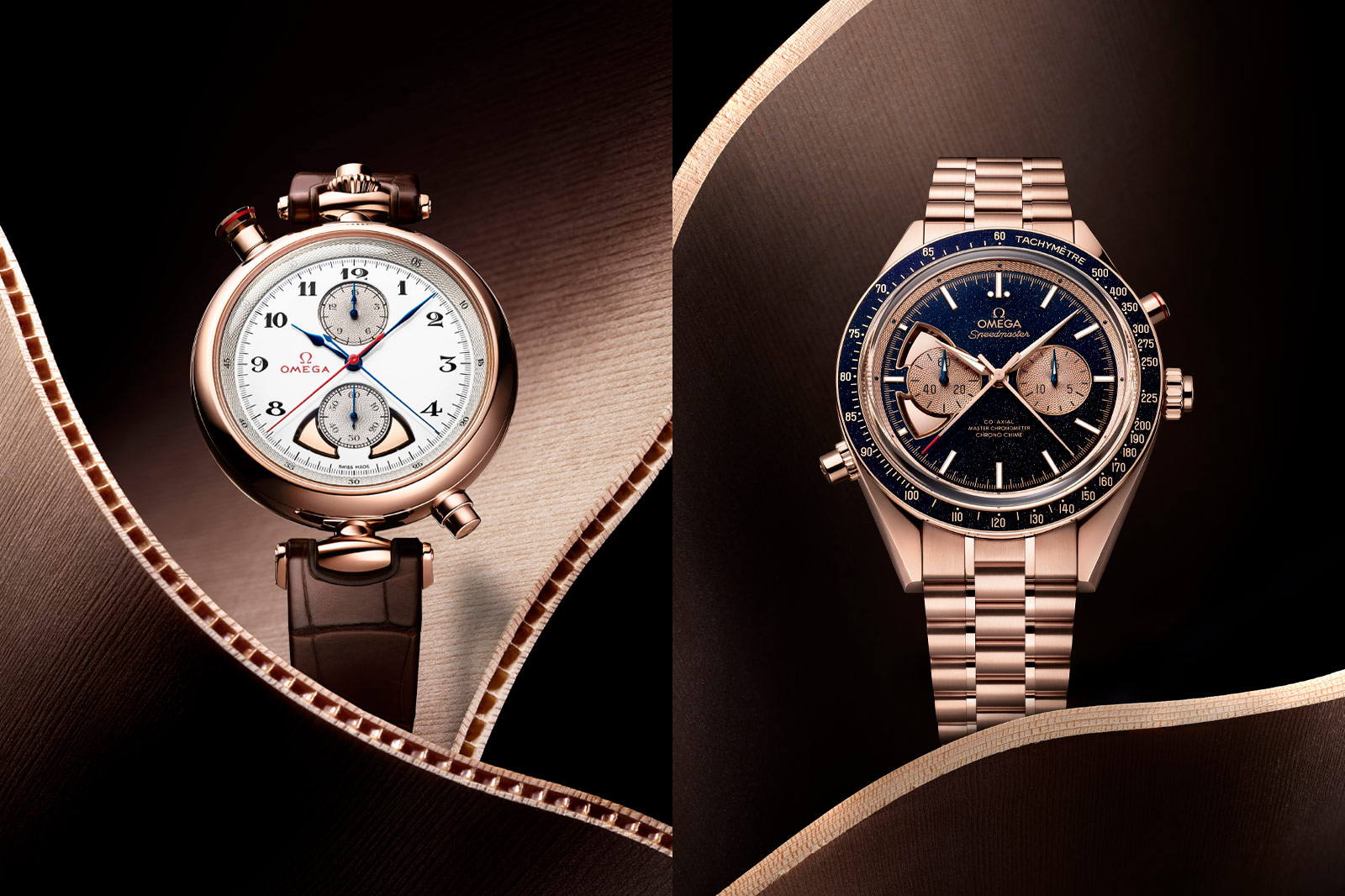 Omega have turned to their heritage to find inspiration for their latest haute horological project. Back in 1892 Omega produced the first ever minute repeater and now they’ve fused that iconic complication with the function they’re perhaps most famous for, the chronograph. The result is the Chrono Chime, which they’ve produced in two editions. There’s the 1932 Olympic Chrono Chime and the Speedmaster Chrono Chime.

Let’s start by talking about the new movement, which is exactly the same in both models. It’s called the OMEGA Co-Axial Master Chronometer Calibre 1932 and it’s a fully integrated chronograph and minute repeater calibre. The development took six years and involved some of the world’s most reputed watchmakers – namely, the watchmakers at Omega’s sister brand Blancpain and Georges Daniels. 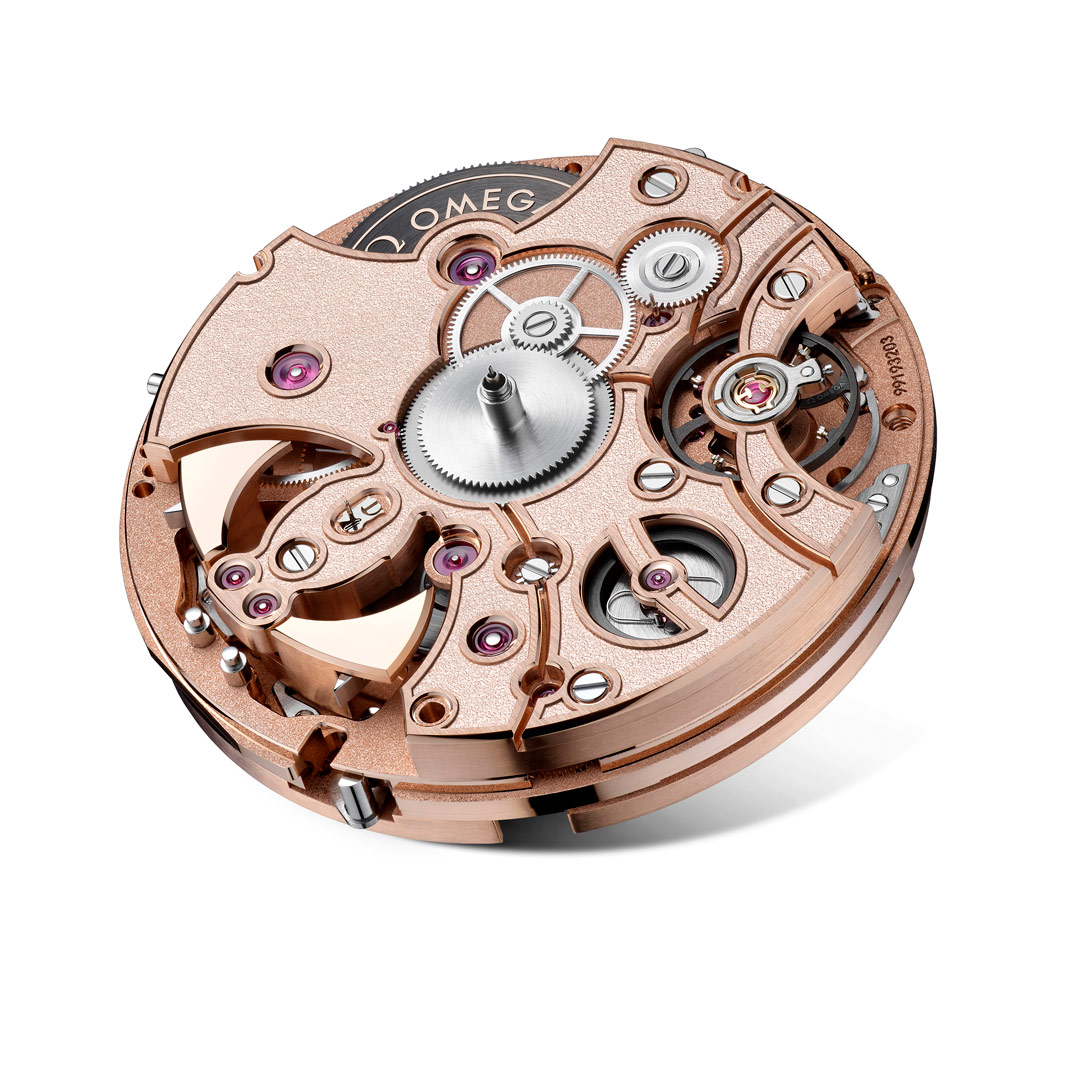 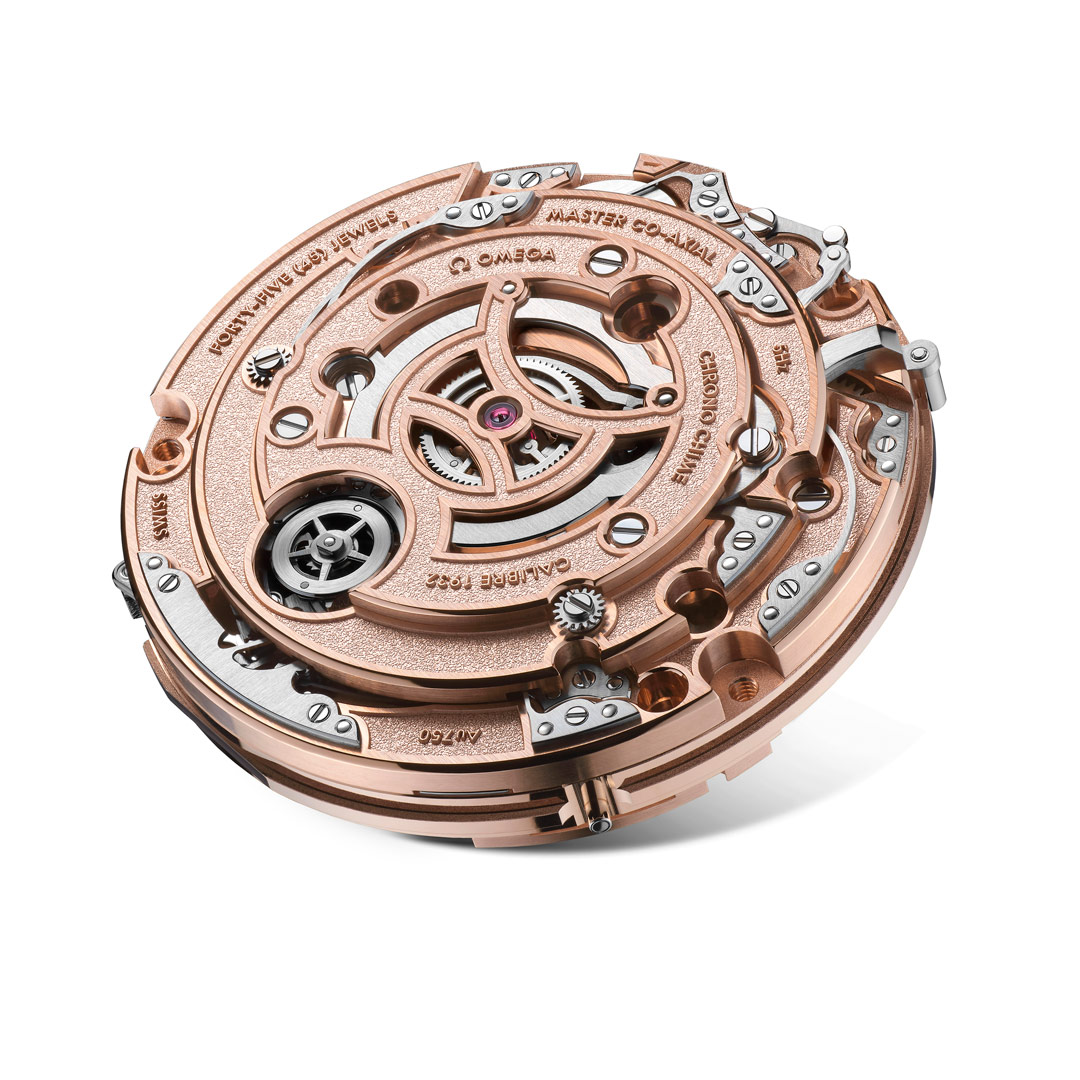 The resulting movement has a frequency of 5Hz to enable the 1/10th second split-seconds chronograph while also being resistant to magnet fields up to 15,000 gauss. Plus, of course, there are the three chime cams with security features to prevent misuse of the notoriously delicate minute repeater complication. 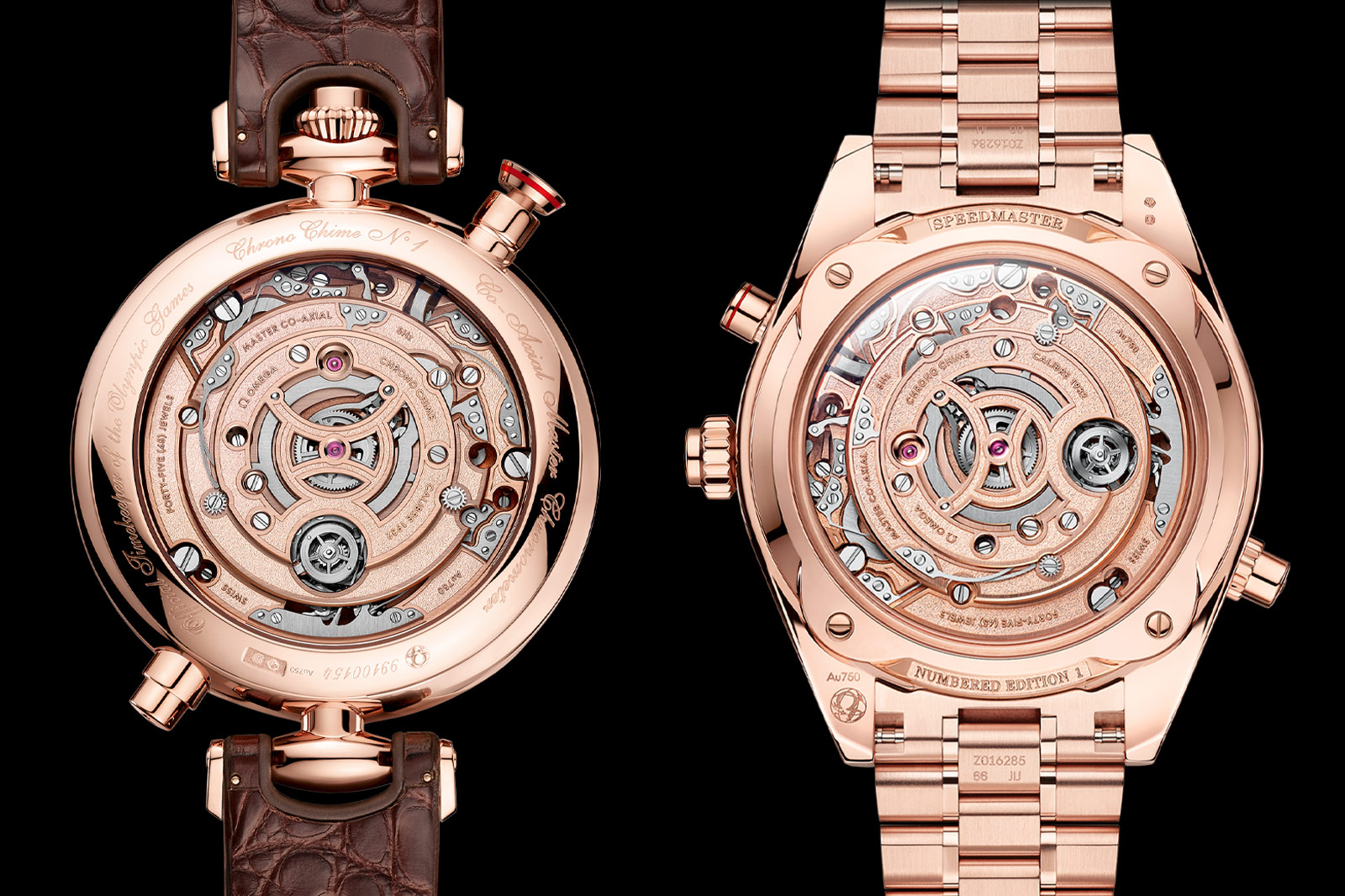 The chiming noise is produced by double hammers and Sedna gold gongs that are built into the watch’s body to improve their acoustics. For those unfamiliar with the concept of a minute repeater, it’s a complication that makes a sonorous chime every minute, allowing the wearer to note the time without needing to look at their watch. 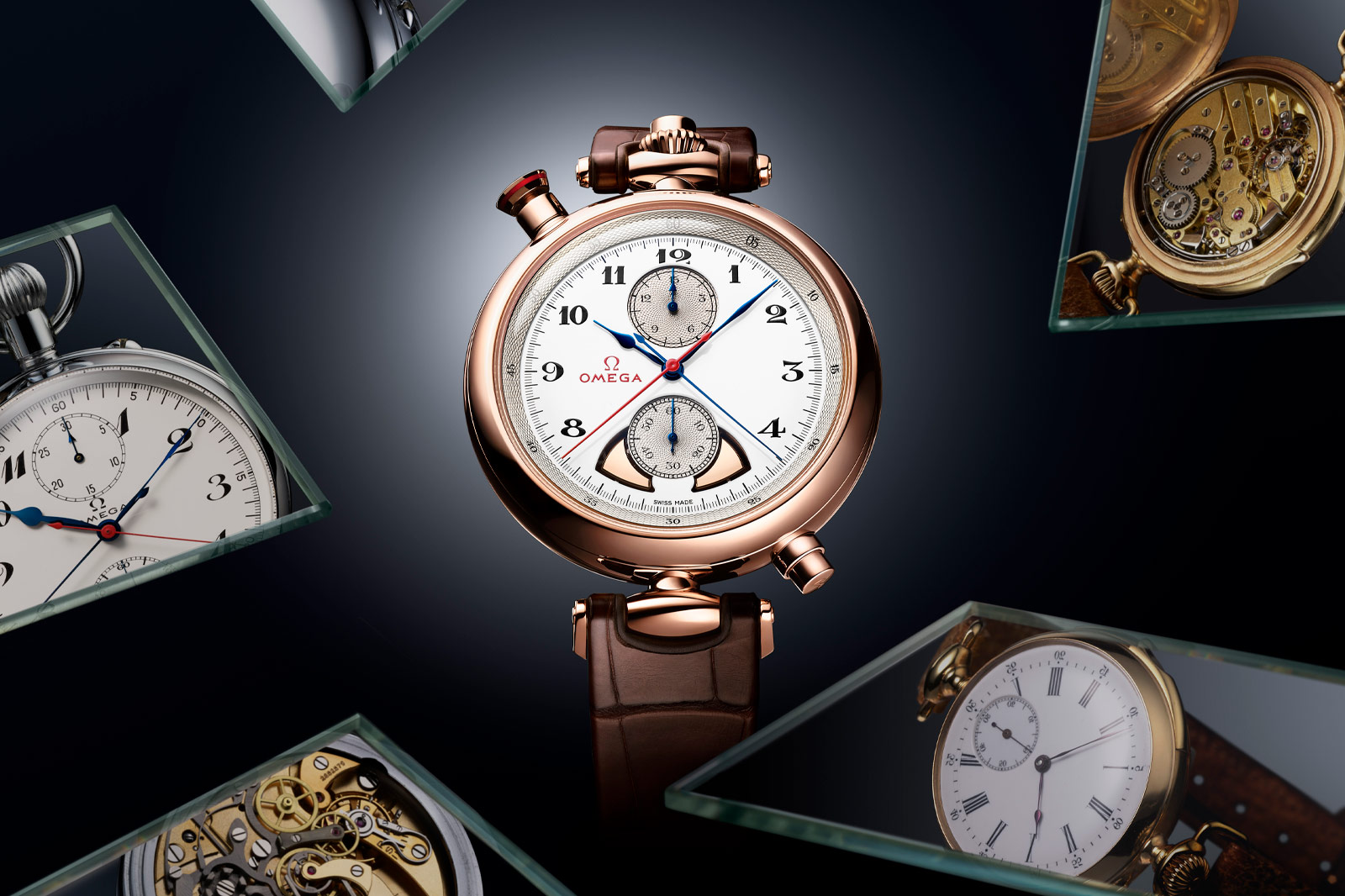 On top of its technical mastery, it still has an admirable power reserve of 60-hours with manual winding. Plus, it’s finished to an absolutely stunning degree. It has contrasting satin-brushed and mirror polished surfaces, all handmade, and features over 40g of Sedna gold components. The tiered layout looks spectacular through the sapphire crystal casebacks of either model. 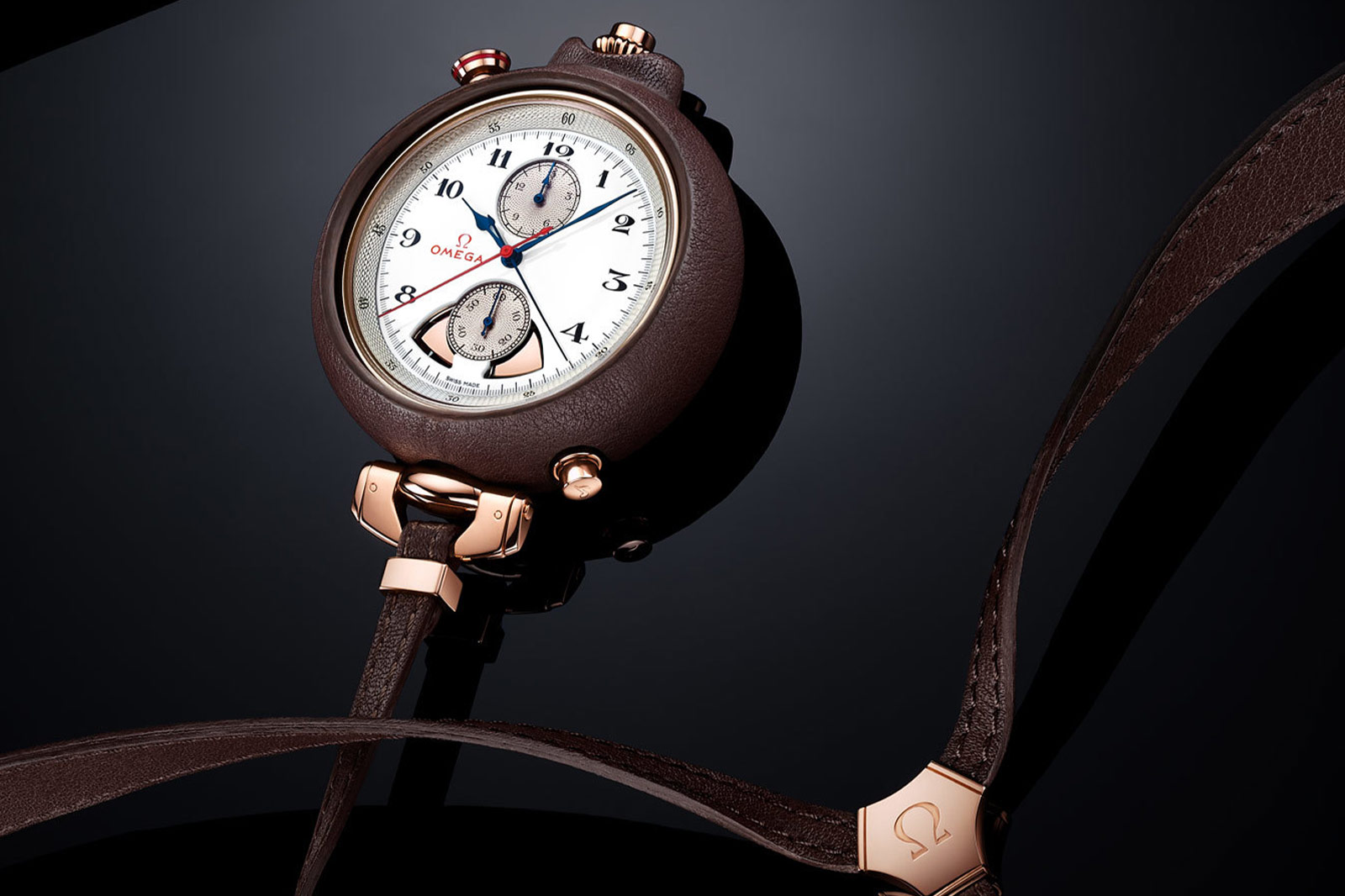 Speaking of the two models, it’s time to take a closer look at the two watches that actually house this movement. The first is the 1932 Olympic Chrono Chime. It’s based on Omega’s inaugural Olympic pocket watch, which they produced in 1932 in celebration of becoming the official timing partner for the Olympics.

It has a Sedna gold case with a diameter of 45mm and has a Grand Feu enamel dial with Petit Feu Arabic numerals. It features a vertical bi-compax chronograph layout with a small seconds subdial at 6 o’clock and a 15-minute timer at 12. The two subdials are finished with an exclusive sound wave pattern that’s a visual representation of the precise soundwaves produced by the watch’s chimes. For visual clarity, the hands of the central hours, minutes, chronograph seconds and subdials have a blue PVD coating while the split-seconds hand is red varnished. 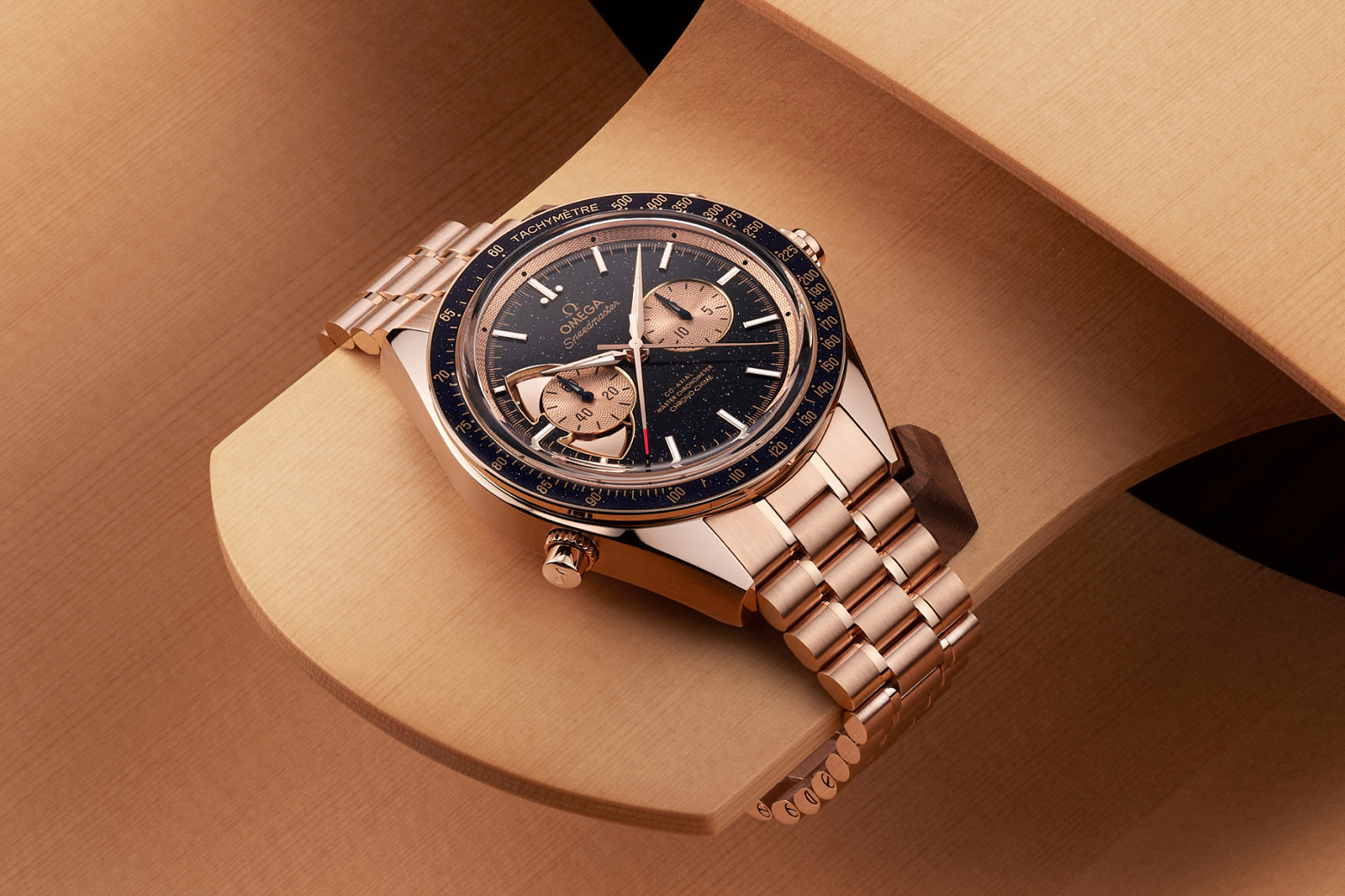 The second model is the Speedmaster Chrono Chime, which is my favourite of the two. Inspired by the second generation of Speedmasters from 1962, it rotates the movement 90 degrees clockwise so that the bi-compax display becomes horizontal in traditional Speedmaster fashion. Obviously, this also means that the two pushers that control the chiming function and chronograph have also changed positions on the case. 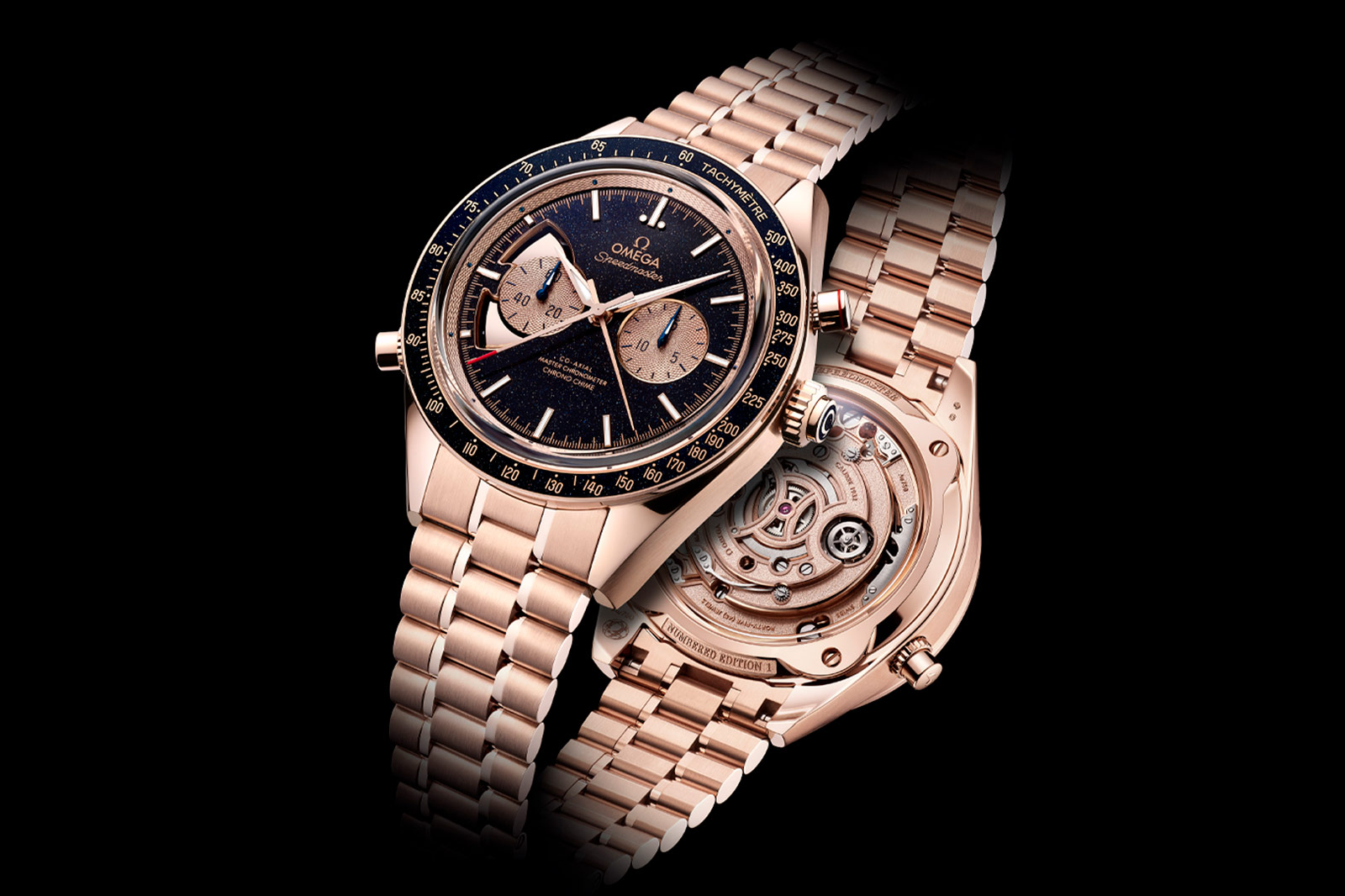 This model’s Grand Feu enamel dial has a deep blue aventurine glass style pattern, which evokes a sense of the night sky. The same material has been used for the watch’s tachymeter bezel, which is exclusive to the Speedmaster variant. Both Chrono Chime models come in a special walnut presentation box that features a resonance plate. The plate enhances the sound and clarity of the chimes when the watch isn’t being worn, making it a fantastic centrepiece to any display or collection. 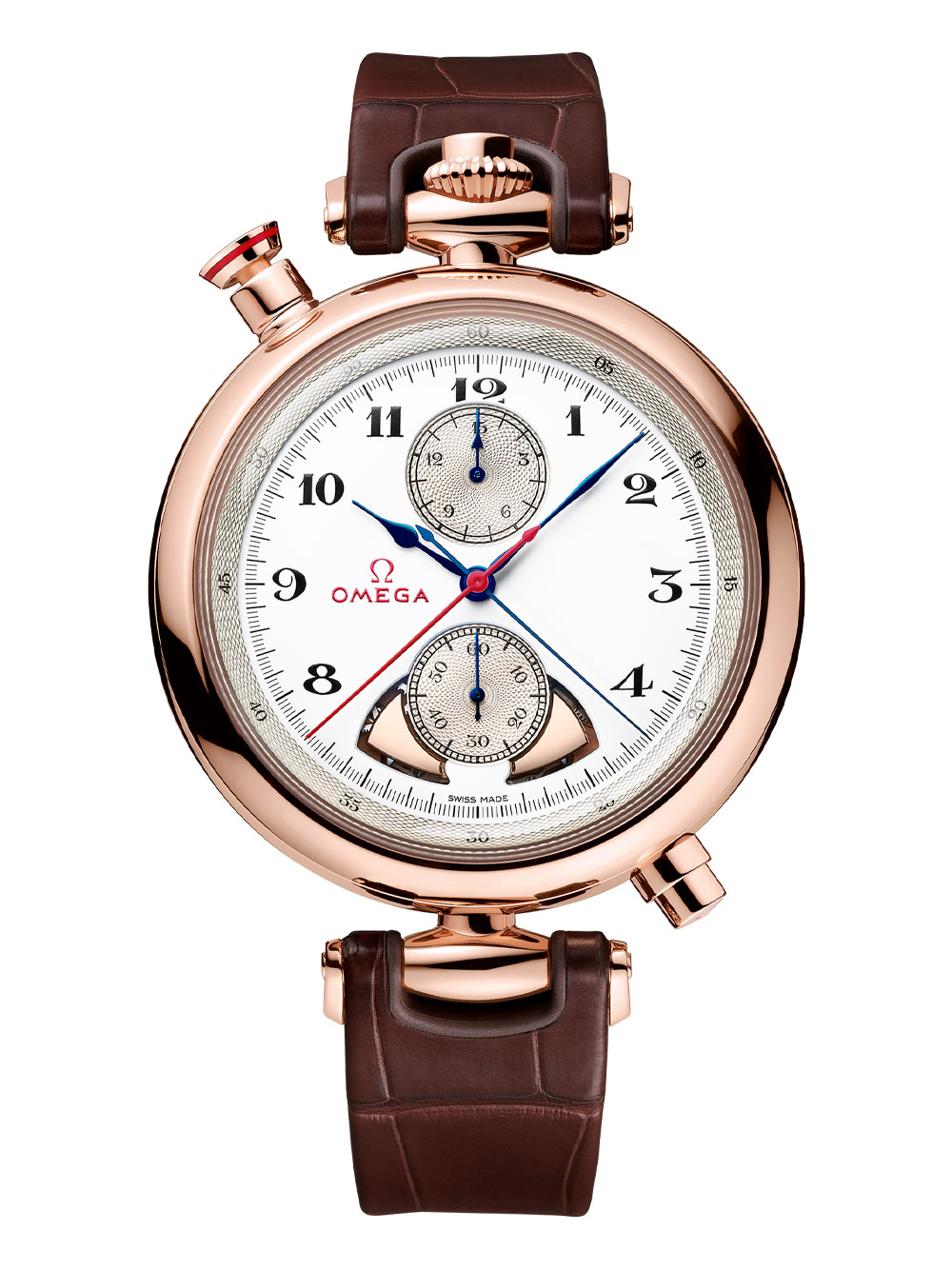 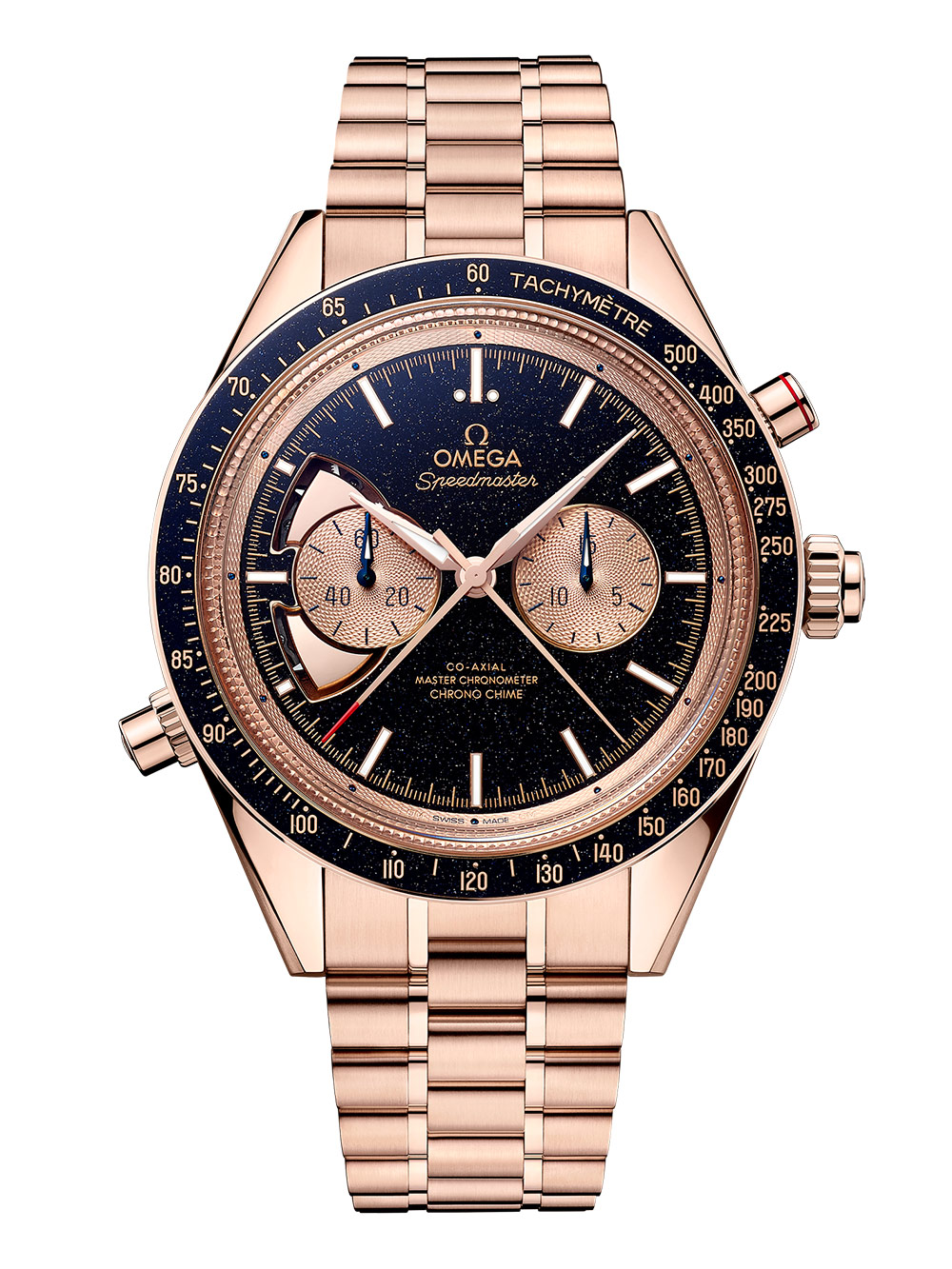