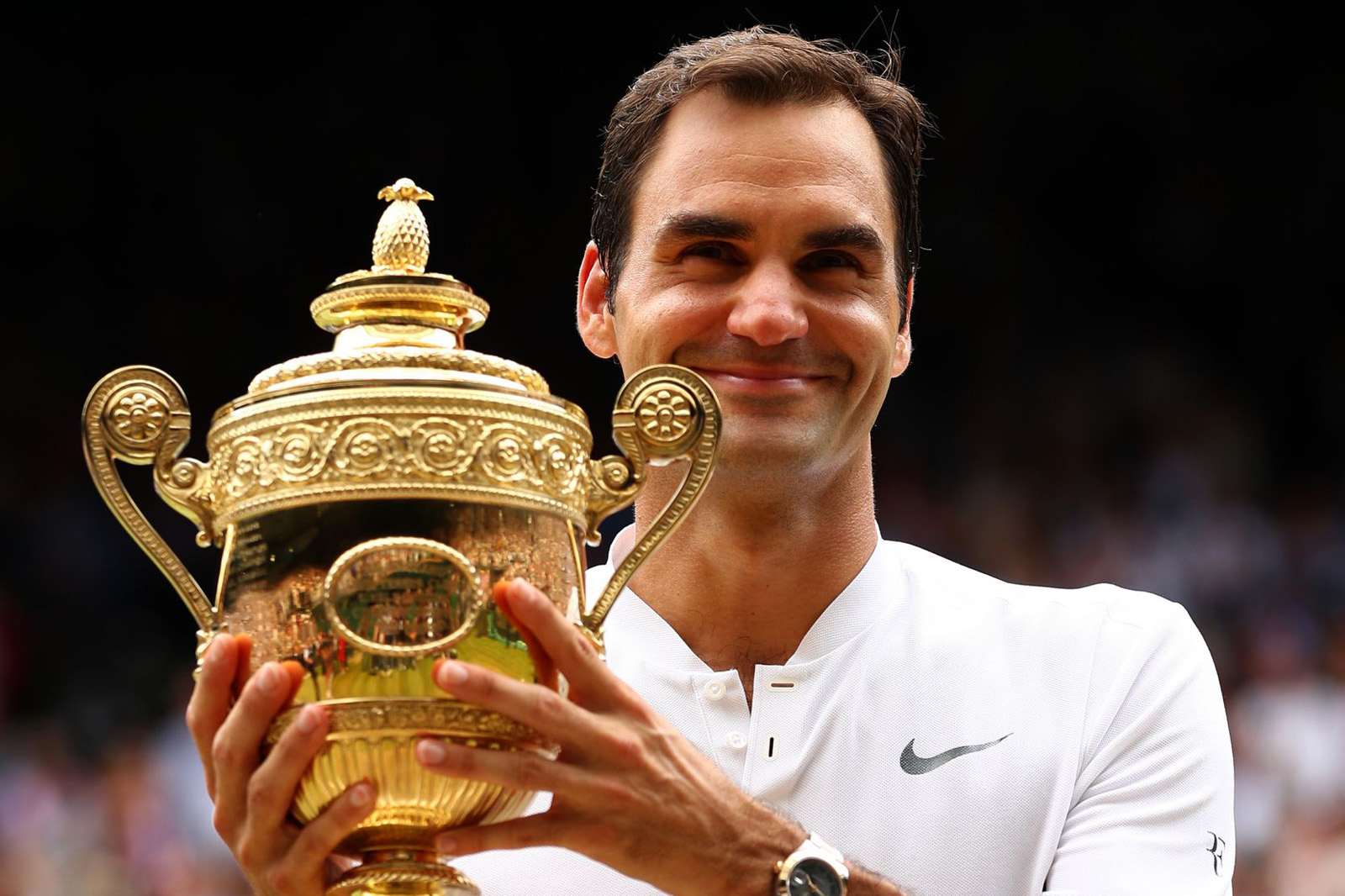 Wimbledon has had many, many champions since records began in 1877 and most of them have become style icons. No one will ever forget Björn Bord’s incredible hair. But tennis players are best known for are their watches, begging the question, which Wimbledon Champion has the best wristwatch?

After all they have the wrists to pull off any timepiece they want and that has led to practically every serious competitor picking up a watch brand sponsorship and more than a few championship matches have concluded with the winning player dashing over to their bag to strap on a timepiece before the post-game interview.

We’ve taken a look at the watch collections of 10 of the most iconic champions of the last 50 years and picked out a signature timepiece for each and ranked them. Because we like to tease you, let’s start at the bottom of the list. 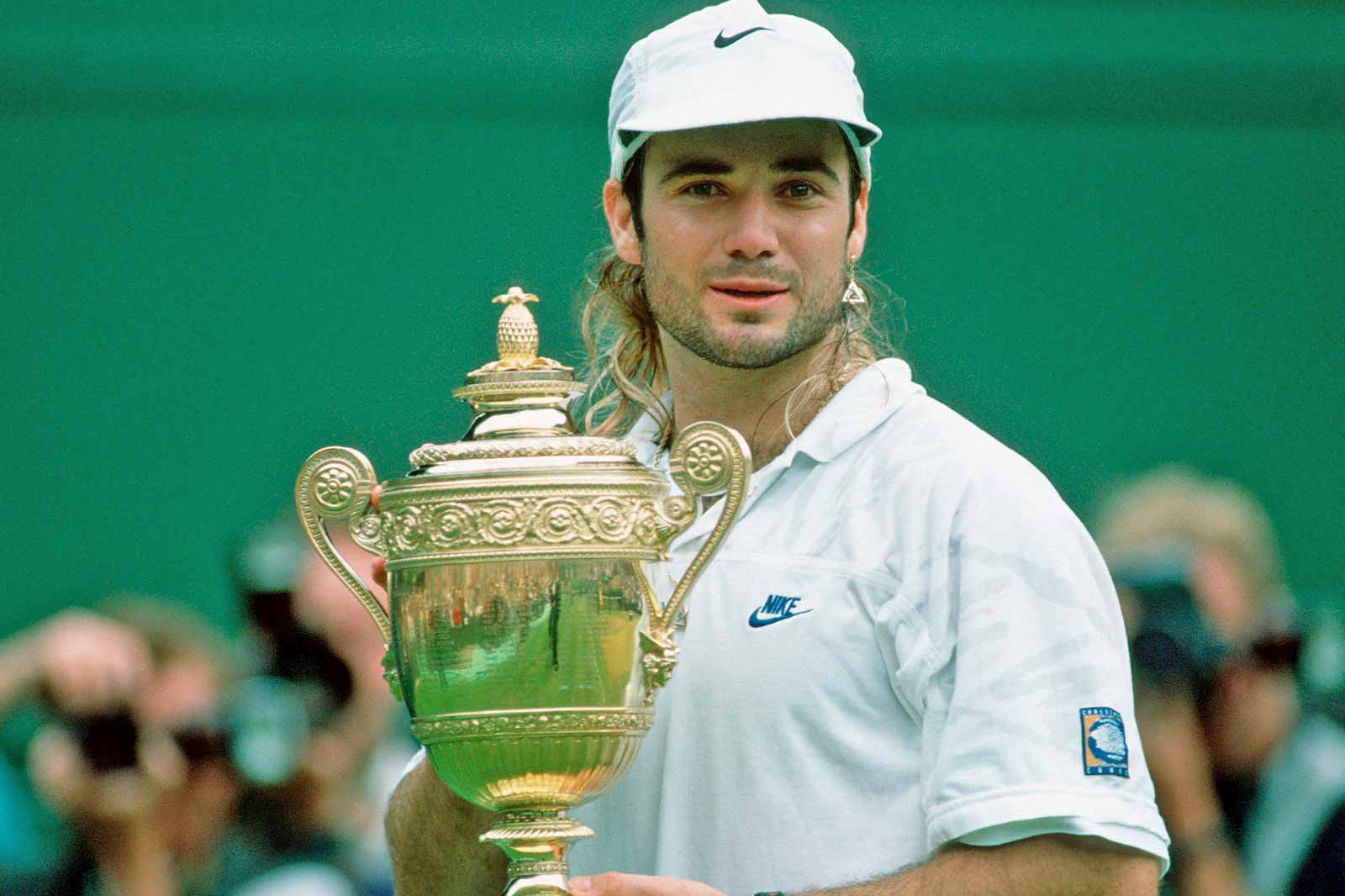 Right off the bat (or should that be racket) we find a legendary player on ambassador duty. Usually being an ambassador means you get to show off all the flashiest timepieces from a brand but sometimes it’s your job to drum up interest in some of the more obscure watches that aren’t quite so prestigious. As is the case with Andre Agassi and his £830 quartz watch from Longines, the Conquest V.H.P. 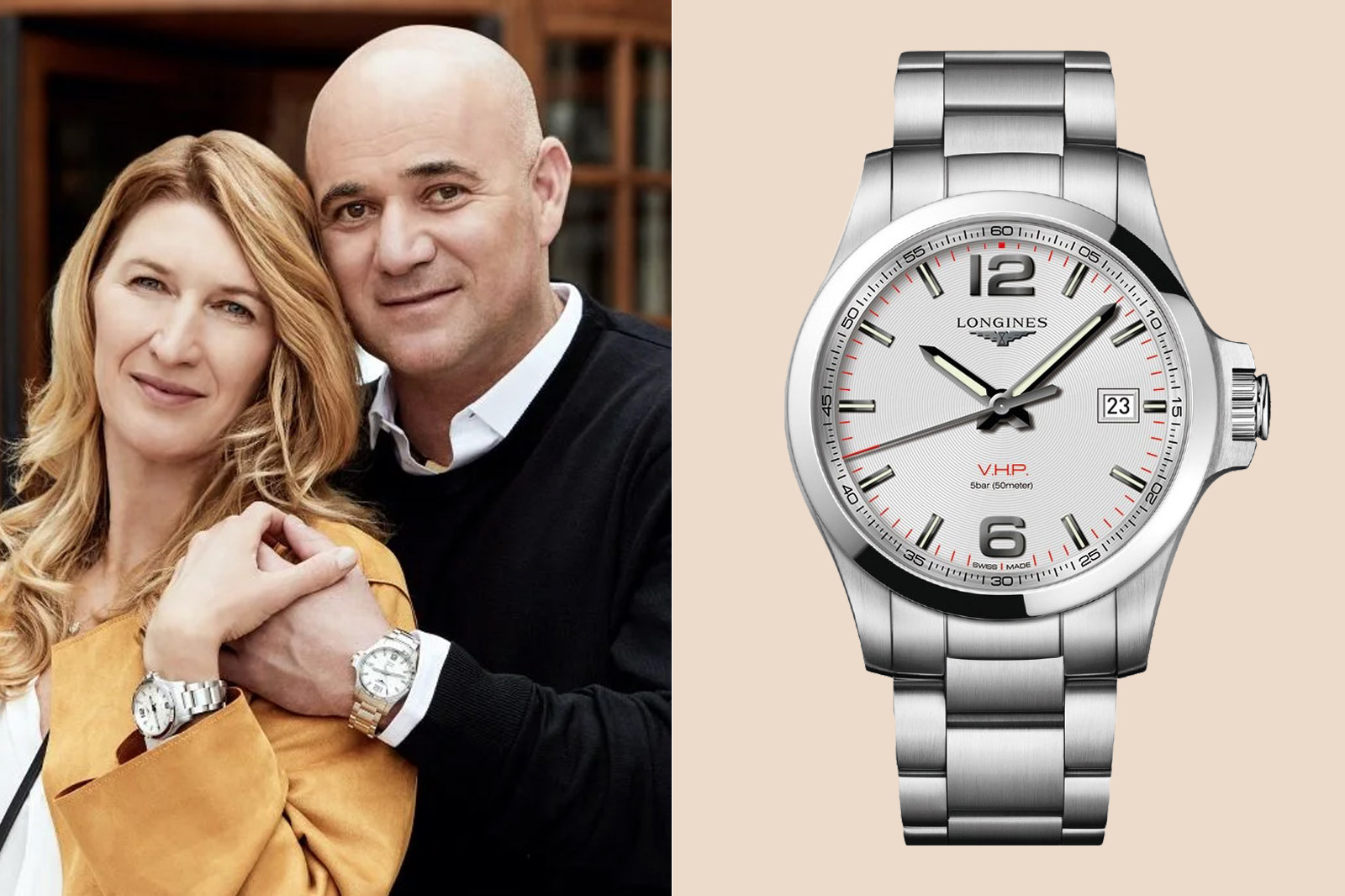 Sure, it’s an admirable calibre with great accuracy, hence the acronym V.H.P which stands for Very High Precision. But other than that, it’s a pretty standard stainless steel watch with a leaning towards field watch simplicity. A much cooler watch for a Wimbledon champion like Agassi is the Longines Spirit Green, matching the grass on Centre Court where he won his title.

The Conquest VHP available at Longines. 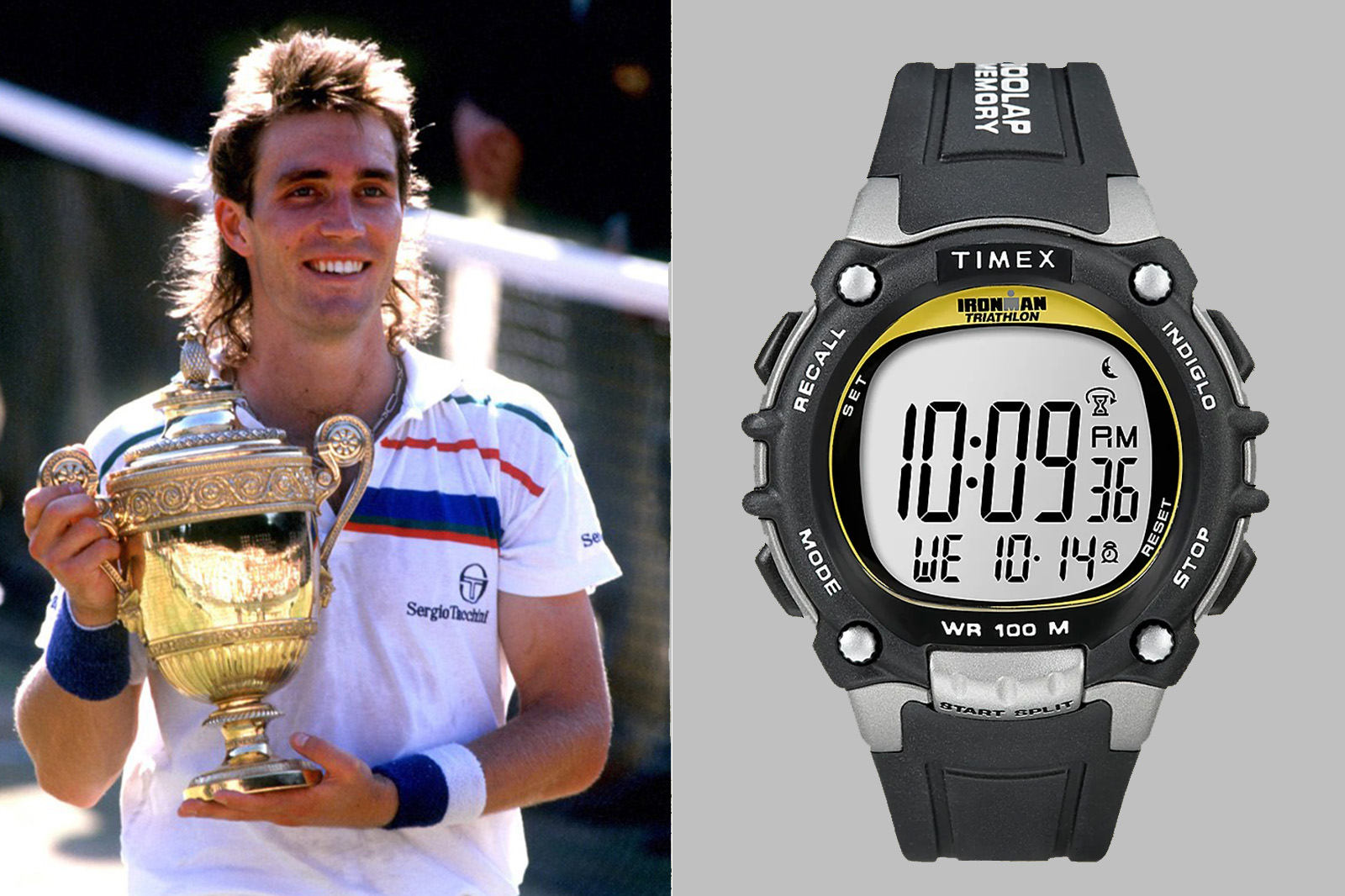 Aussies have a reputation for being laidback and down to earth people and that’s certainly true of Pat Cash in recent years. The ex-pro turned coach and occasional BBC pundit is renowned for his eternally shaggy haircut and checkerboard bandana and you have to love him for it. He’s definitely on the rugged side of tennis players and that shows in his favourite watch, the Timex Ironman Classic 100.

Cash is such a fan of the sporty digital watch that he wrote a review of it on his website. He says he’s been using one regularly for over 30 years and loves the simplicity of its digital design that has a long battery life and is as durable as he is.

At 42mm diameter it risks being a tad large if you don’t have well built wrists – not a problem for a Wimbledon champion. While it’s no longer produced by Timex, you can still find them on Amazon for around £90, making it the most accessible watch on this list. However, it’s certainly not the luxury piece of horology players are known for touting at the big events. 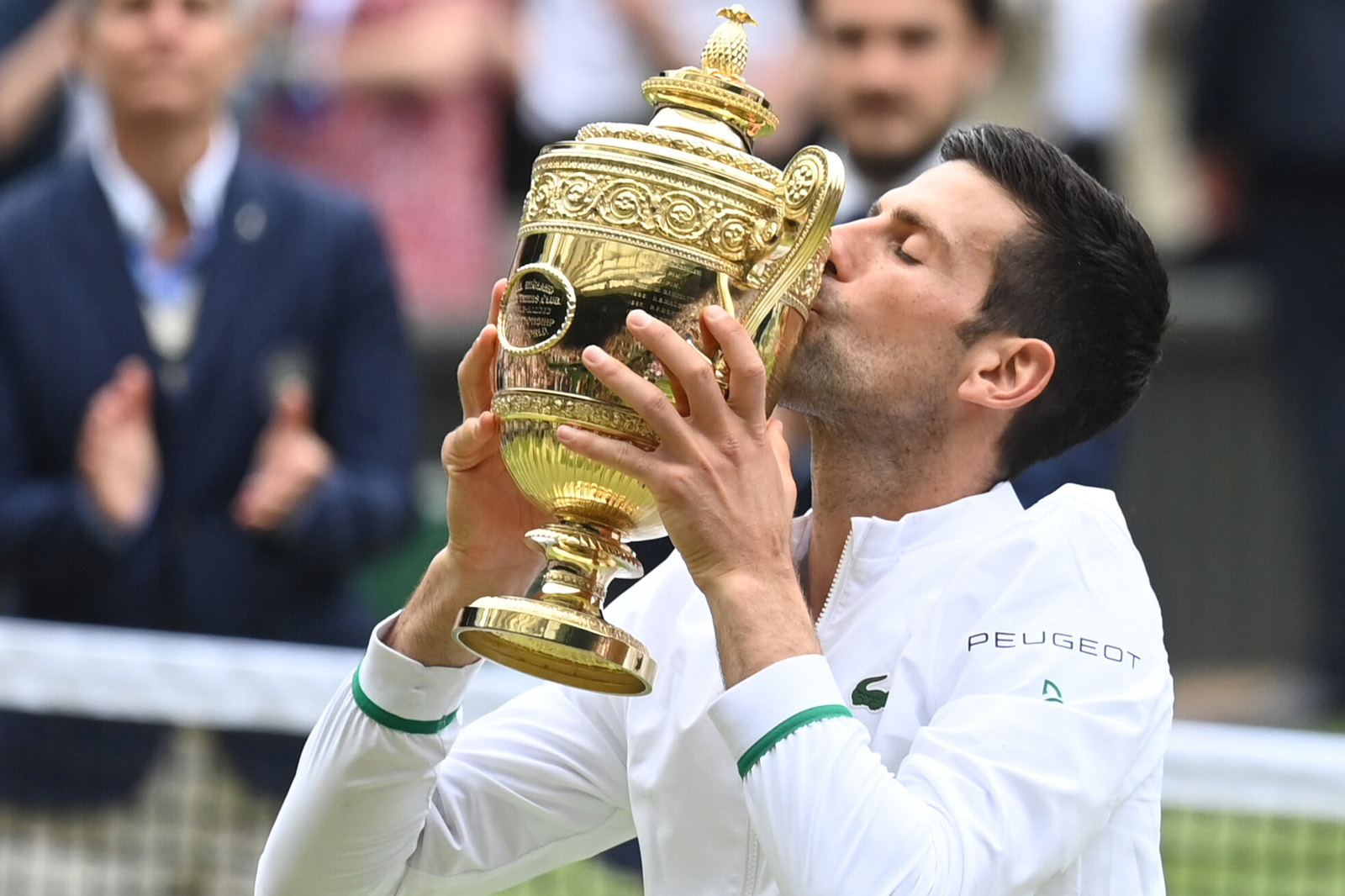 One of the most dominant players in recent years, Novak Djokovic is the reigning champion at Wimbledon and is seeking to defend his title in 2022 (you are in the future so likely already know if he was successful). He’s an interesting character on the tennis circuit, often perceived to be villain standing in the way of heroes like Federer and Nadal. It’s a reputation that he isn’t best pleased by and has tried multiple times to win over the hearts of fans with characterful victory celebrations and a Wimbledon champion watch made in collaboration with Seiko. 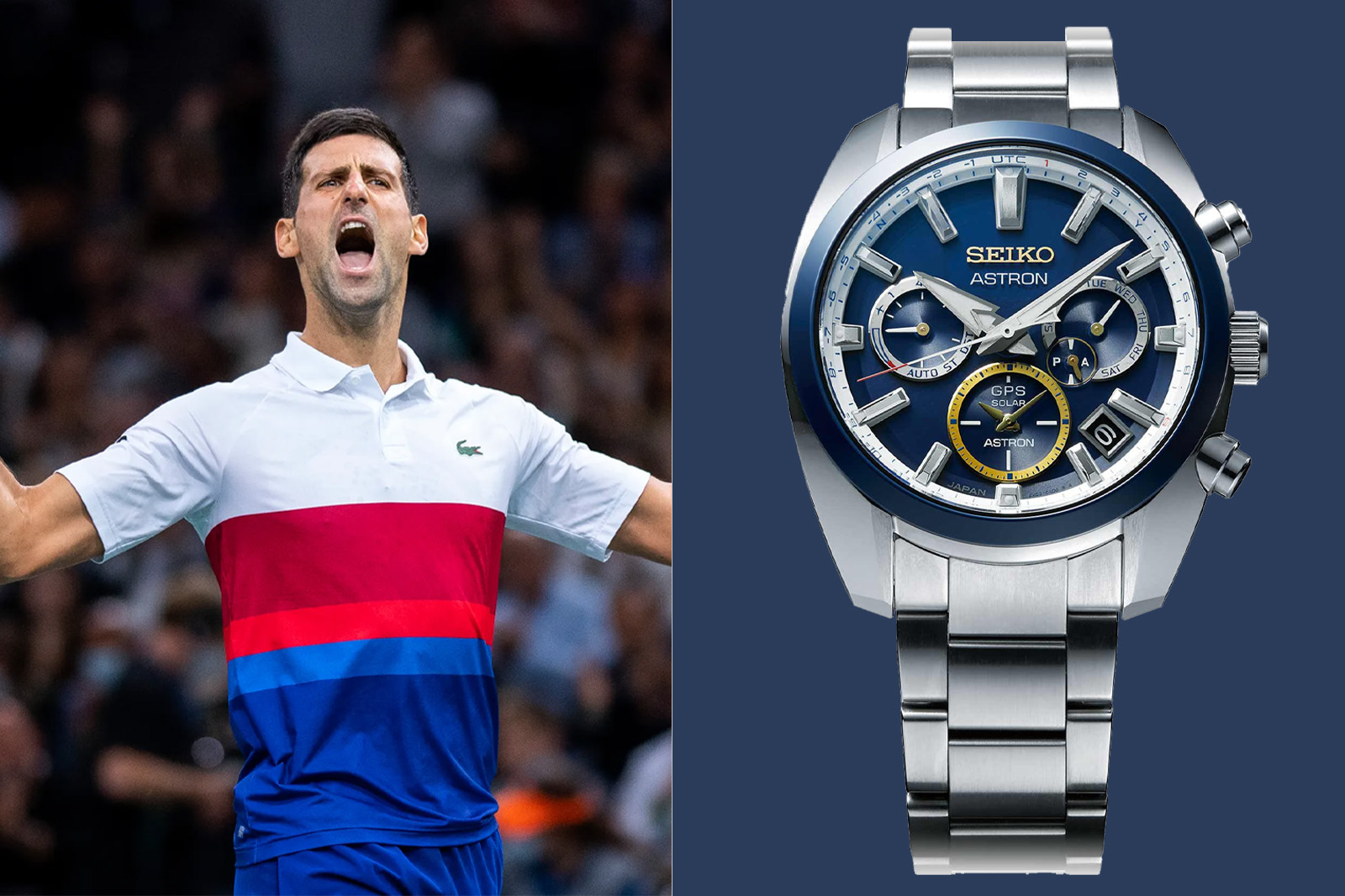 The Astron Novak Djokovic 2020 is based on the Astron GPS, a watch designed for international travel that uses GPS technology to automatically adjust the hands to the local time zone. Considering star players routinely travel between Australia, the USA, France and the UK within a year, you can see the appeal. The Novak edition bears his signature and is recoloured in the colours of the Serbian flag, a solid consideration as the best Wimbledon watch, but not one that makes it to the top of the rankings. 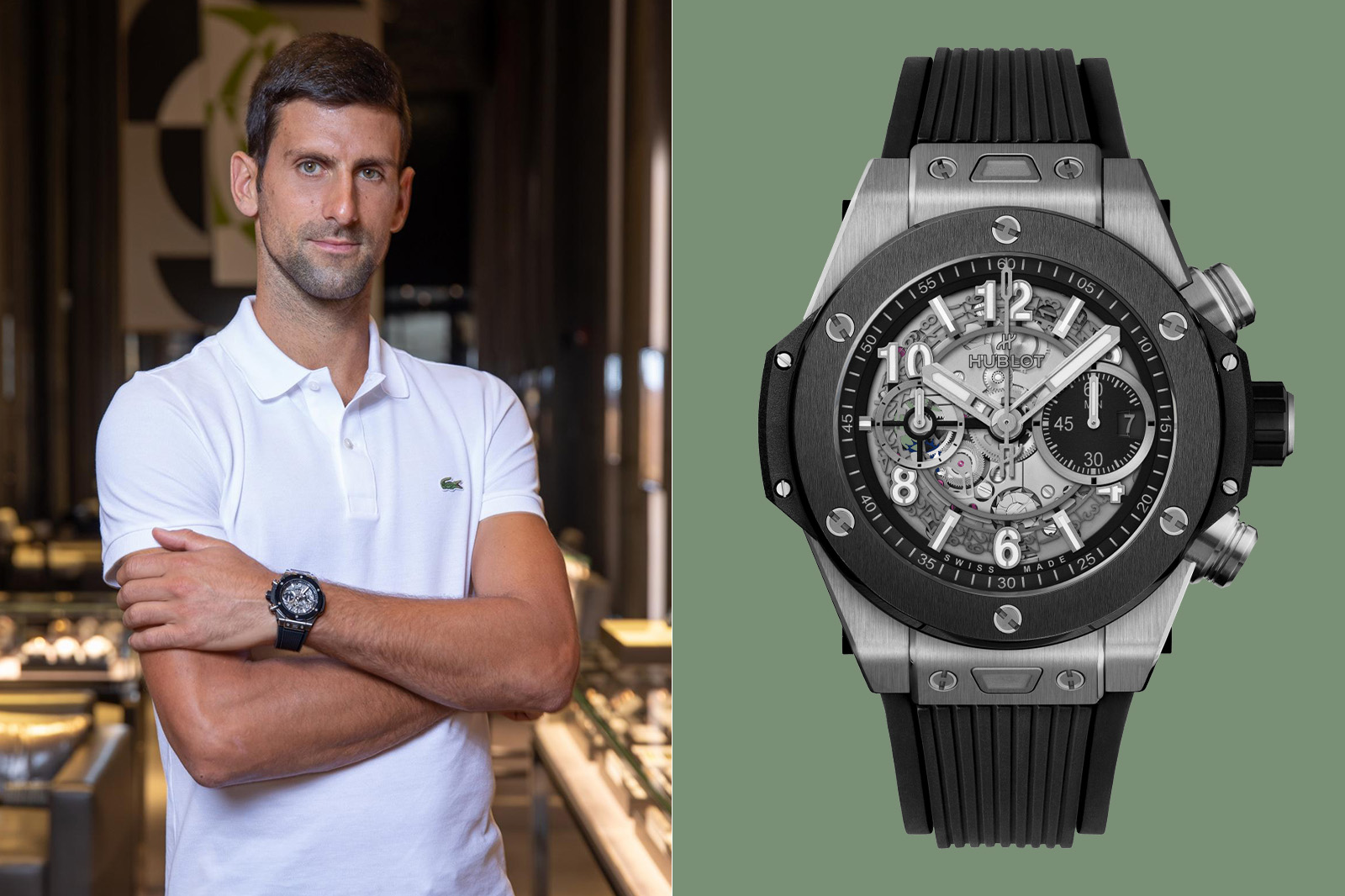 Although since August in 2021 he has become an ambassador for Hublot and has transitioned to the streetwear sports watch giant that is the Big Bang Unico. A watch with a personality as bold as Djokovic on court. 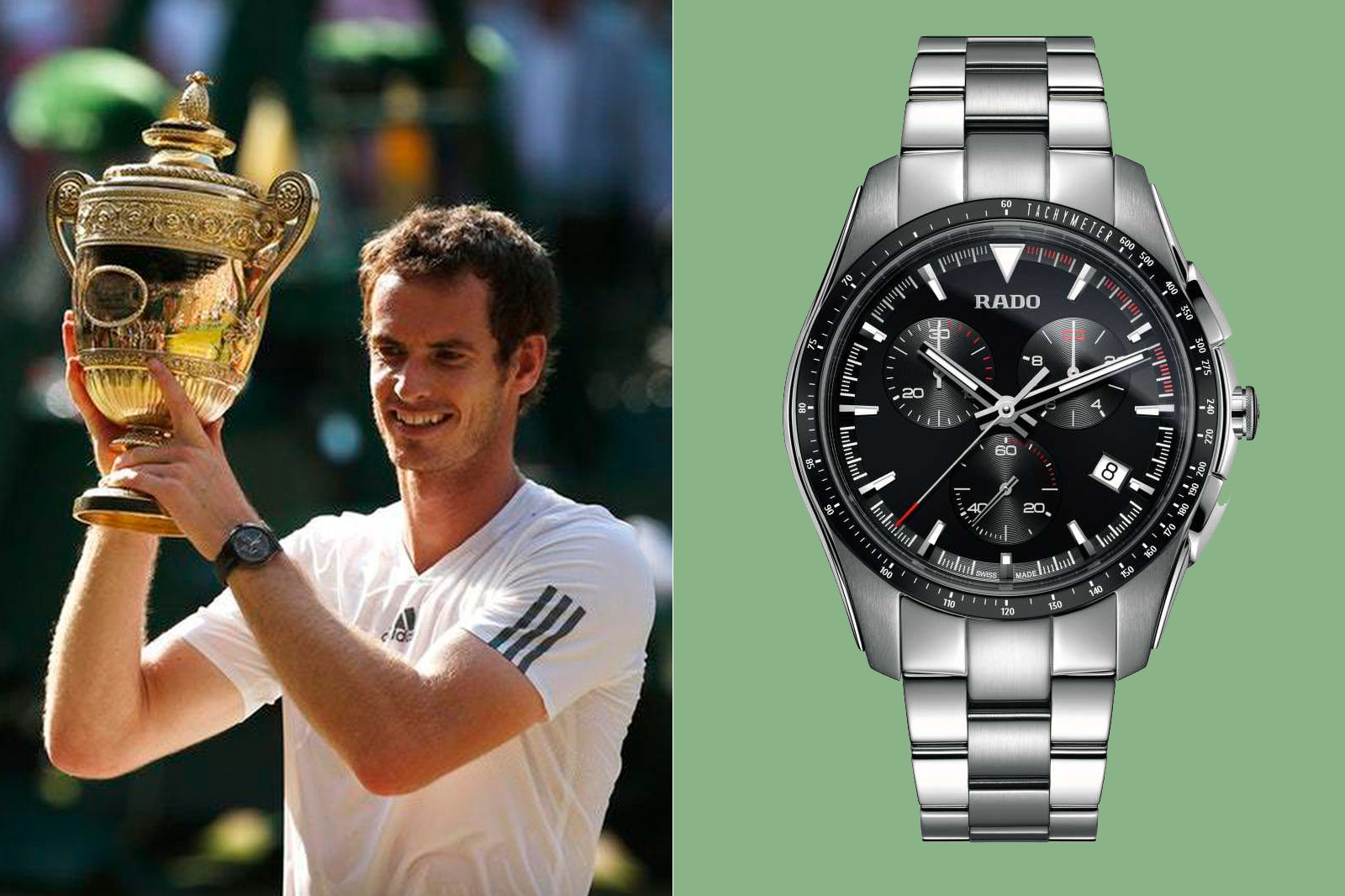 What is Andy Murray’s career defining movement? There are many and while carrying the flag for the UK at the opening ceremony of the 2016 Olympics was incredibly special, being the first British player to win Wimbledon after a 77 year drought has to be the highlight. And at his side was his watch sponsor Rado, who provided him with several watches including the HyperChrome Automatic Chronograph.

There are several tennis-themed HyperChromes however Murray’s version is the plain black edition, which is the classier choice. At 45mm in diameter, it’s a substantial piece of stainless steel that would dwarf most wrists but it looks just right on Murray. Although I suppose the fact he is usually seen with sweatbands covering most of his forearms would help any watch look dainty in comparison. It’s also the first properly mechanical watch on this list. 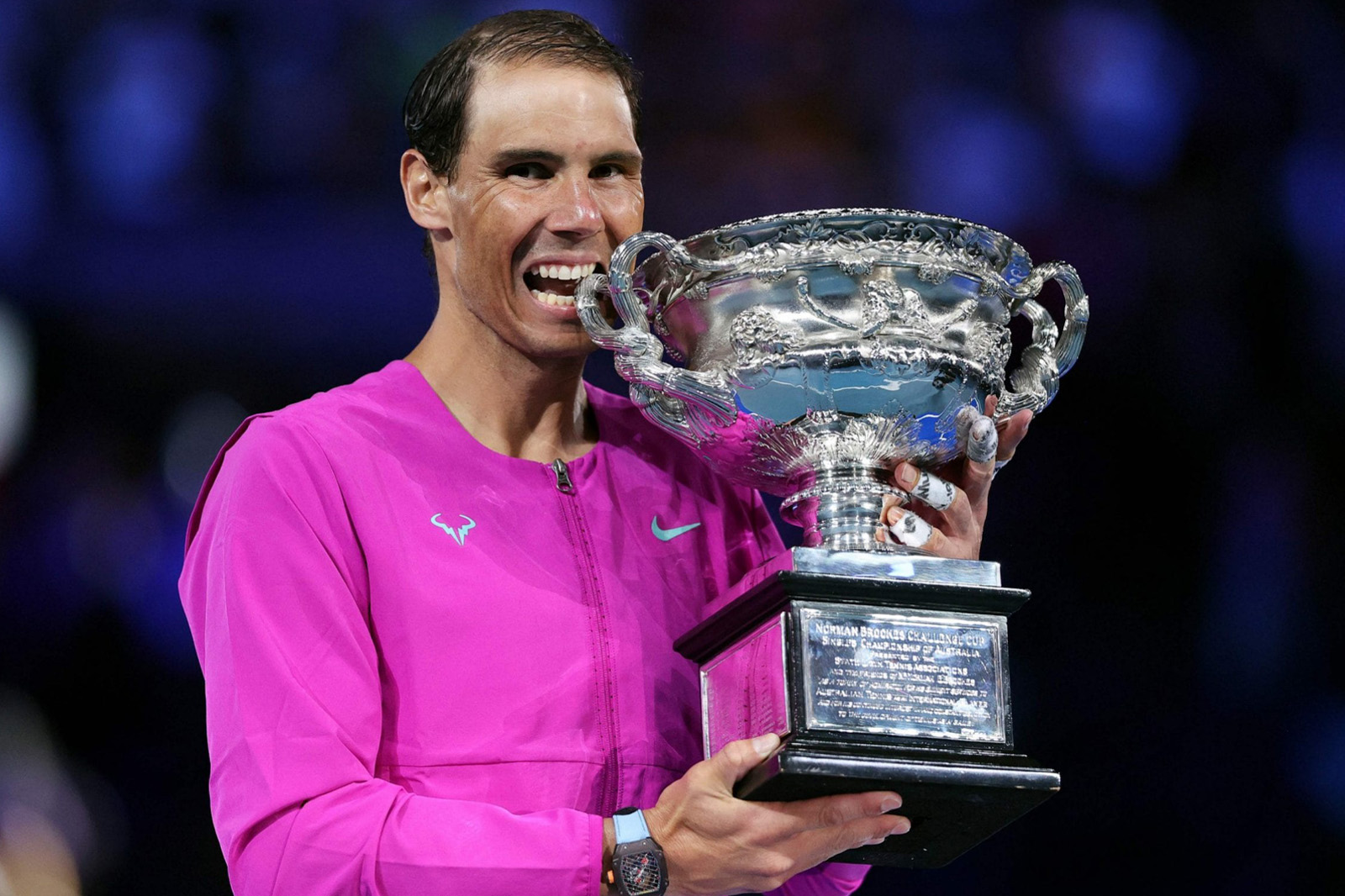 While he’s picked up a couple of Wimbledon trophies over his career, Rafael Nadal is much more of a clay court specialist with 14 victories at Roland Garros. His longevity as a player is matched only by the longevity of his partnership with Richard Mille. To celebrate the 10th anniversary of their work together, Richard Mille created the RM27-04 Tourbillion Rafael Nadal, which is literally a million dollar watch.

As befitting a high-end sports watch, the tonneau case is constructed from hardwearing and light weight titanium with a black PVD coating, maintaining classic RM styles. However, where this watch excels is the dial, which is openworked in an incredibly unique way with calibre and hands suspended on a mesh of steel wires, which not only looks like the strings of a racket but was made using nearly identical techniques. This is certainly a great and thematic Wimbledon champion watch, but it’s not quite the best. 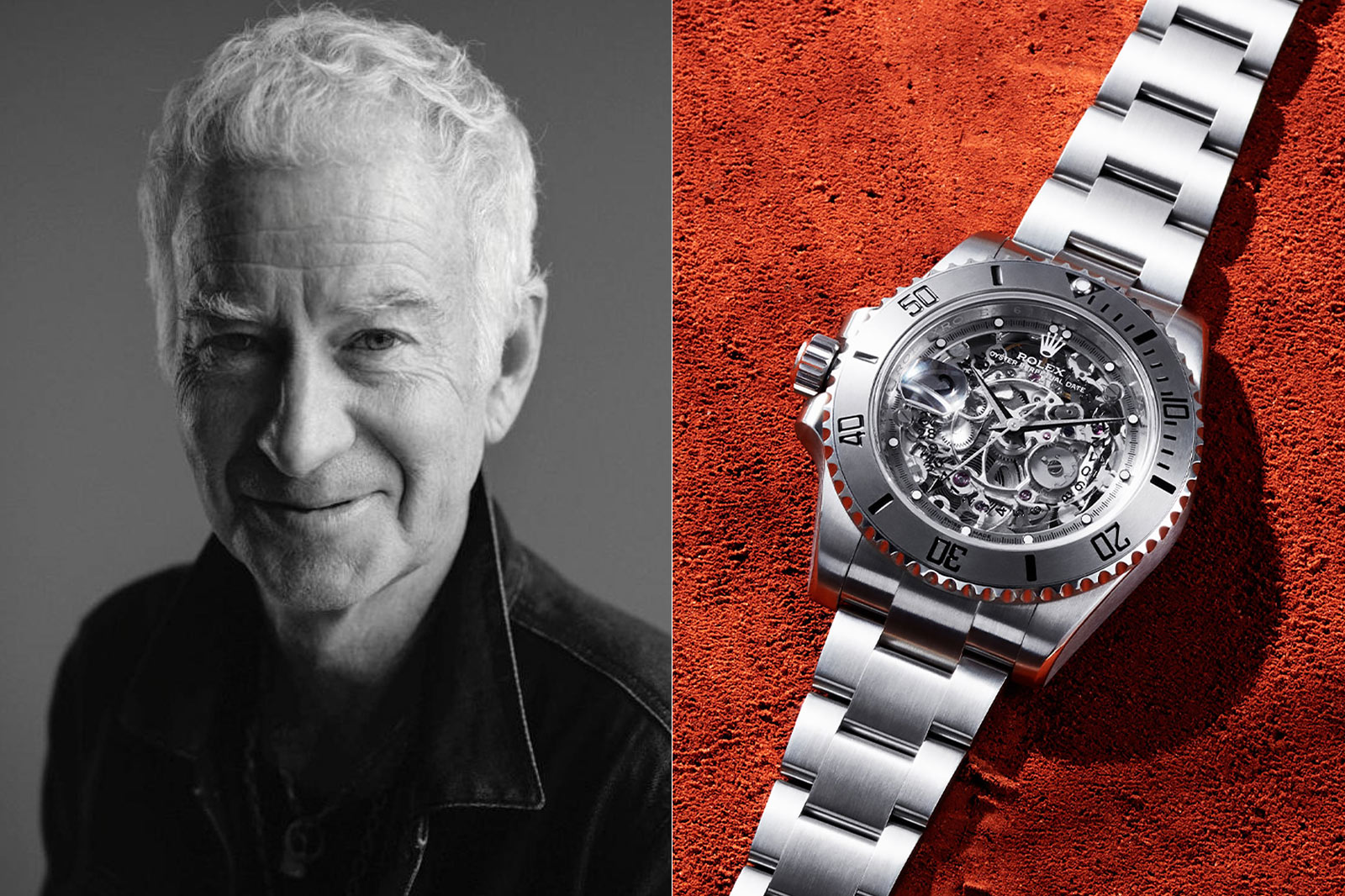 John McEnroe is never far from controversy and running his mouth has got him in trouble more than a few times in his career as a pro and later as a pundit and commentator. From his world famous ‘you cannot be serious!’ to his questionable attitude towards the withdrawal of Emma Raducanu at the tournament this year, he is always in the news for some reason or other. Frankly, he keeps the world of tennis lively, which it could sometimes use some help with.

As for his watch, it’s another potential controversy because he has a customised Rolex – some people love them and some people view them as sacrilege. Fortunately, McEnroe went about it the right way going straight to the experts at Artisans De Genève to skeletonise his Submariner Date. It’s actually pretty classy with a steel grey palette throughout that isn’t too ostentatious as some custom jobs can be. Most notably the crown has been transposed to the left as McEnroe is a lefty. 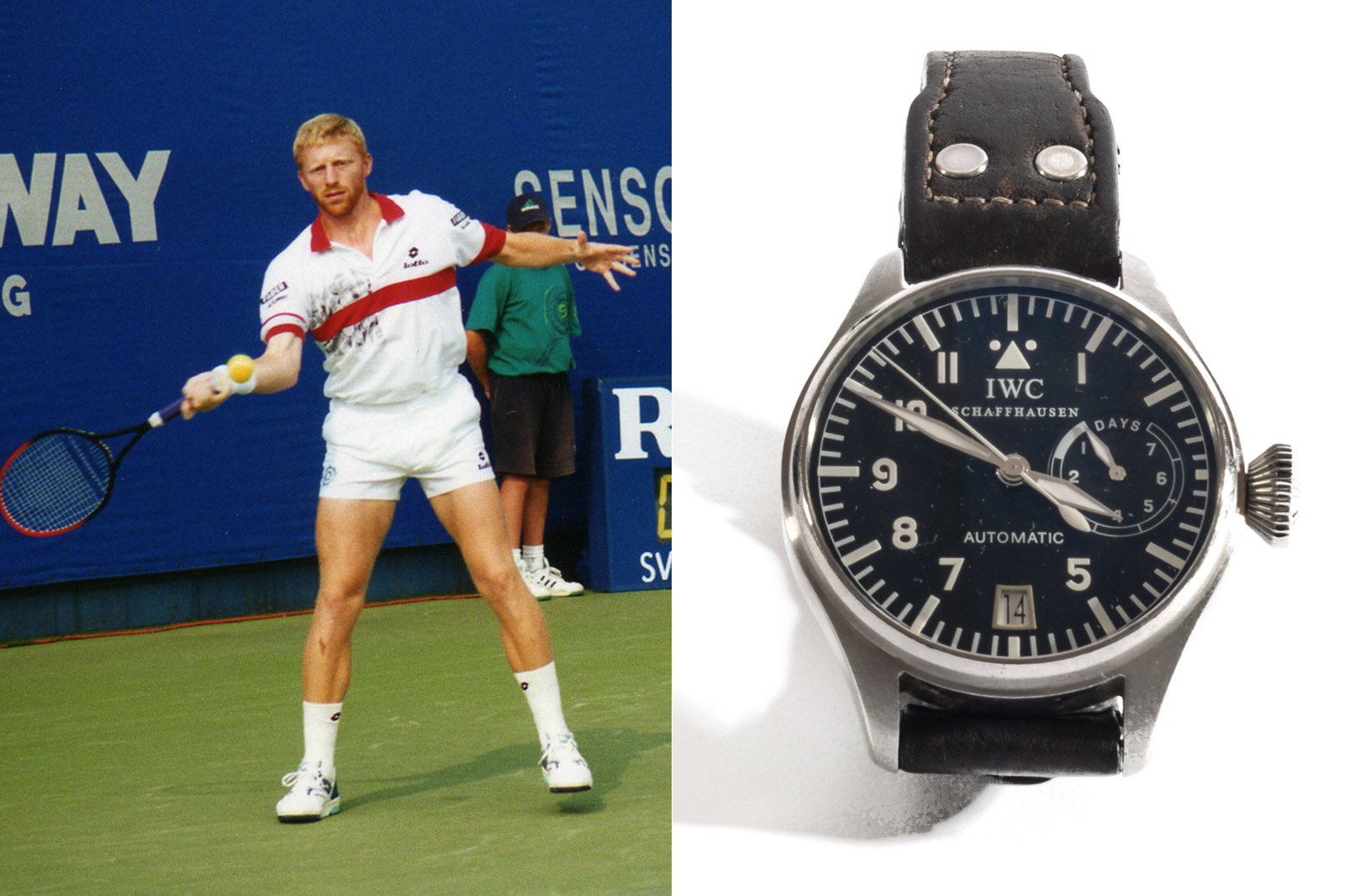 If McEnroe is controversial on and around the court, Boris Becker is controversial everywhere else with multiple public tax and divorce scandals that have recently landed him in the hottest of water. However, that doesn’t take away from the fact that he was the youngest player to become Wimbledon champion at just 17 when he won the championship for the first time. Winning from such a young age, he had plenty of funds available to him and became an avid watch collector, assisted by becoming an IWC ambassador.

Unfortunately, those scandals I mentioned came back to bite him and he was declared bankrupt in 2017 and a few years later he was forced to sell a portion of his watch collection to fund legal proceedings. One of those timepieces was an IWC 5002 Big Pilot, the debut Big Pilot from 2002 that helped turn the Big Pilot name into a mainstay of modern pilot’s watches. And big is the operative word because they’re 46mm in diameter. A modern classic is certainly a worthy Wimbledon champion’s watch and one of the best. 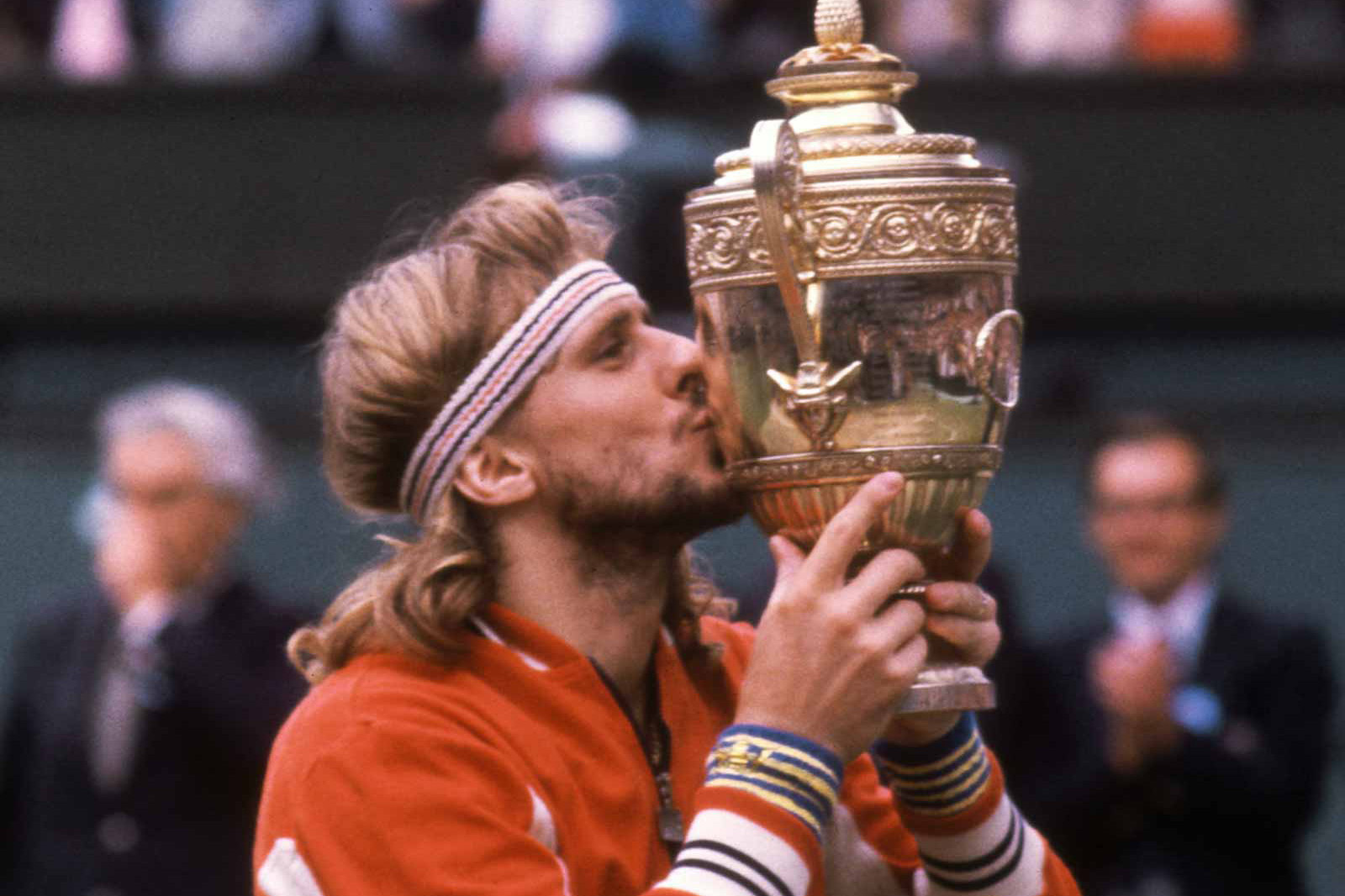 When it comes to prestigious watches at Wimbledon, Rolex is at the top of the list as they are the official timekeepers of the tournament. So, it’s no surprise the Rolex has worked closely with some of the most stylish players in history and there are few who could compete with Björn Borg’s hair or his volleys in the late 1970s. The first megastar of tennis. 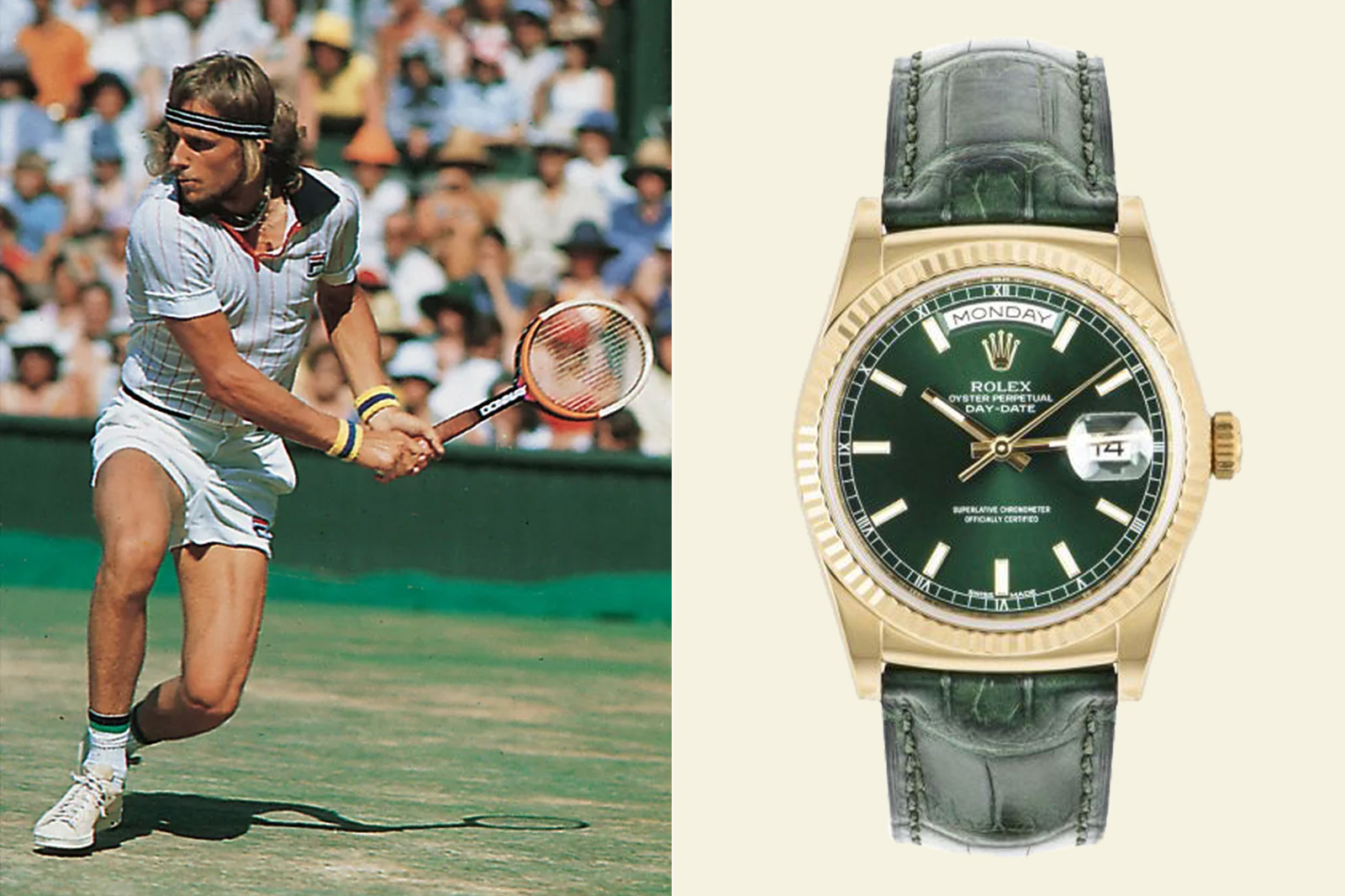 His Rolex of choice is a vintage Day-Date from 1956, the year of his birth. It’s as classic as they come with a gold case with fluted bezel, day function, date function and cyclops lens. It also has a gloriously rich and verdant green dial that wouldn’t be out of place on a modern timepiece from 2021. The excellent quality of the vintage piece is testament to Borg’s careful ownership, unsurprising as the grass court volleys for which he’s known require soft hands.

Find out more at Rolex. 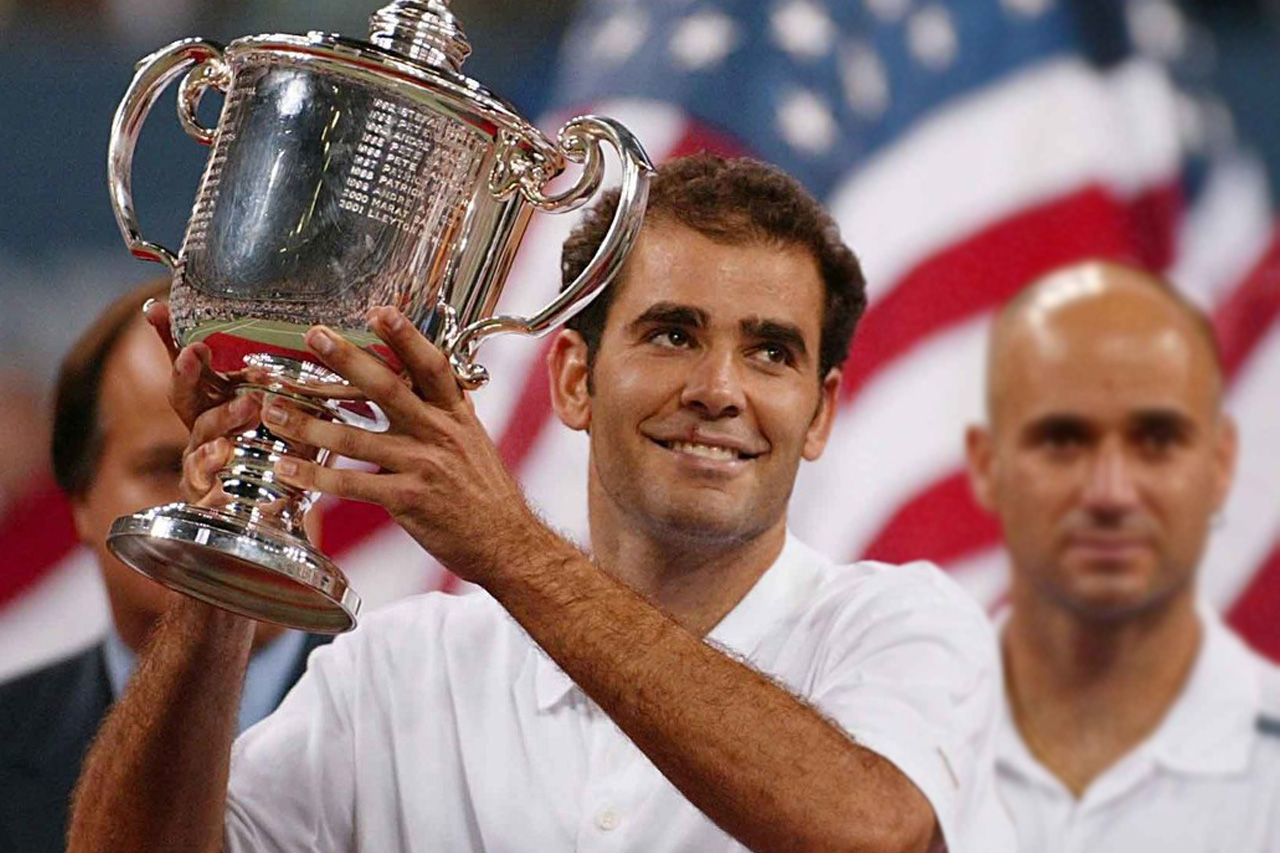 Founded in 1881, Movado is one of the oldest watch houses around and they produce highly refined, often artistic watches that have won over 200 awards. In the late 90s, the face of the brand was Pete Sampras, arguably the most dominant tennis player of his day who had a stranglehold on the Wimbledon title until his retirement. 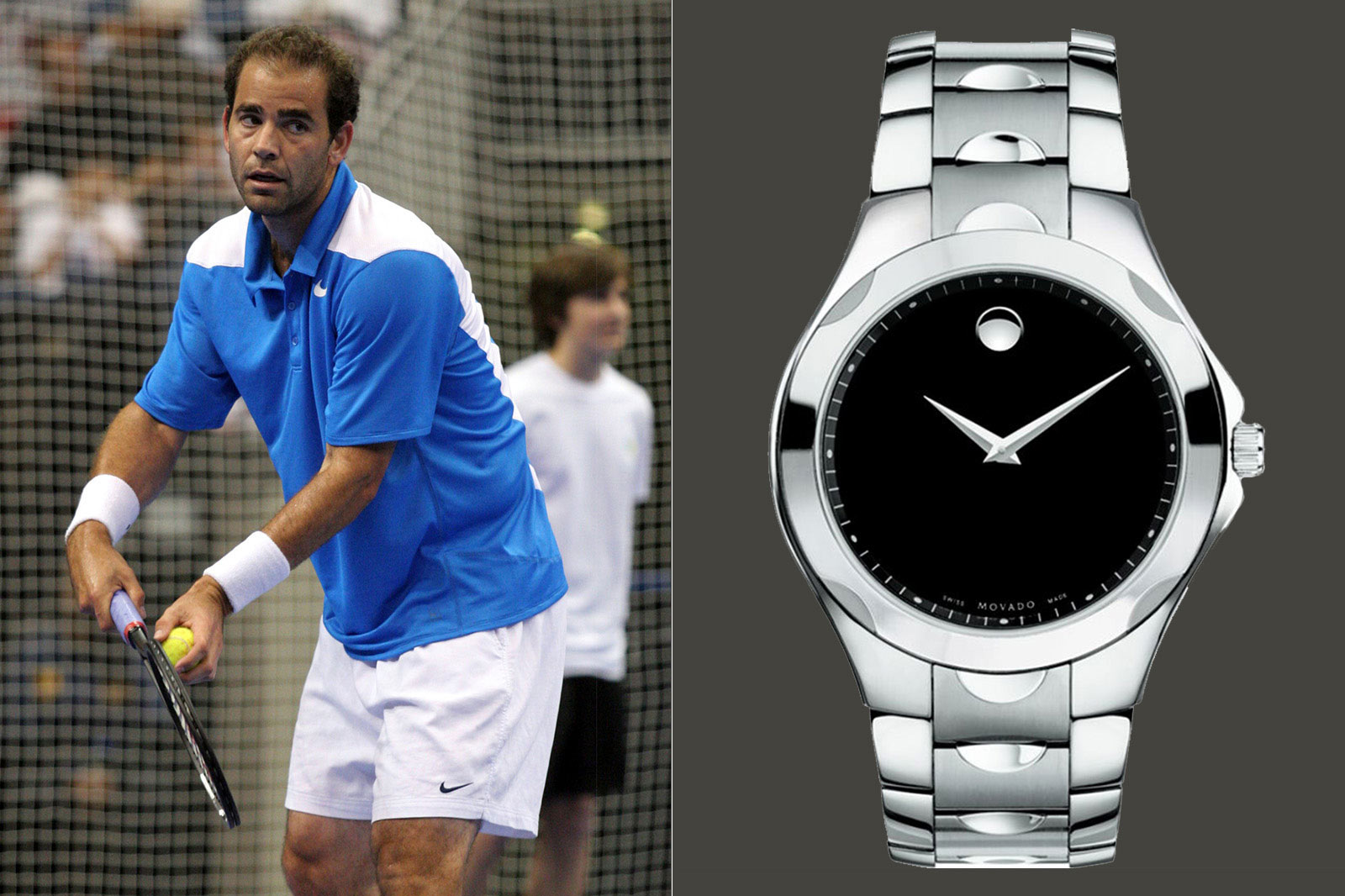 While he has helped advertise many timepieces, a standout is the Movado SE, which was first released in 2000. It’s the sportiest version of Movado’s signature style with a Museum dial and polished dot accents on the stainless steel bezel. Modern SEs tend to fall on the more luxe side of sports-luxe with gold coloured indices but Sampras’ version was a classy monochrome edition with a shiny silver coloured dial.

Is Federer the greatest player of all time? That’s not for us to say but he’s certainly one of the most stylish with an instantly recognisable fashion logo. He wouldn’t be the first to turn his tennis career into an apparel company, it’s worked for Fred Perry. Aside from his clothing his playstyle is also aesthetically beautiful as he’s one of the most athletic players with great movement and a well-rounded game. So, what other watch could he possibly have but a Rolex. 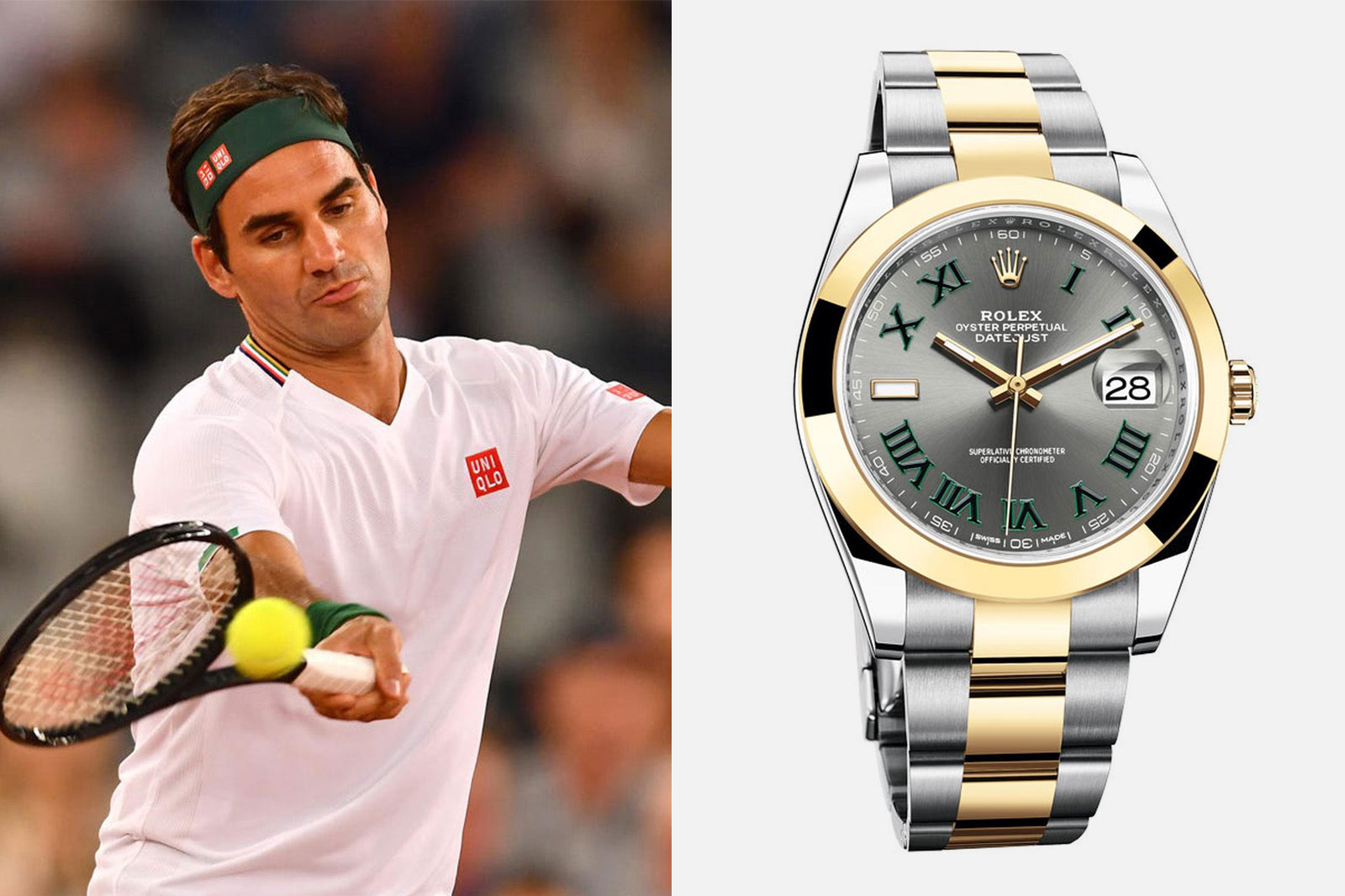 While he has many, the watch that he singles out as being one of his favourites is a vintage Datejust II, which he wore lifting the Wimbledon trophy in 2009 after beating Pete Sampras’ record for all-time Wimbledon championship titles. The concentric Arabic numerals are a cool feature and they look great in pale blue raised above the surface of the dial – it makes the classic dress watch look sporty and compliments Federer’s achievements.

The Datejust is about as traditionally Rolex as they come and is a genuine style icon, making it the epitome of high-end, prestigious watches. While there are superior watches out there in terms of watchmaking ability like the Patek Philippe Grand Complications or more sought after watches like an Audemars Piguet Royal Oak, the Datejust and Rolex have a special place in any tennis fan’s heart. This is the very best Wimbledon champion’s watch around.

Find out more at Rolex.