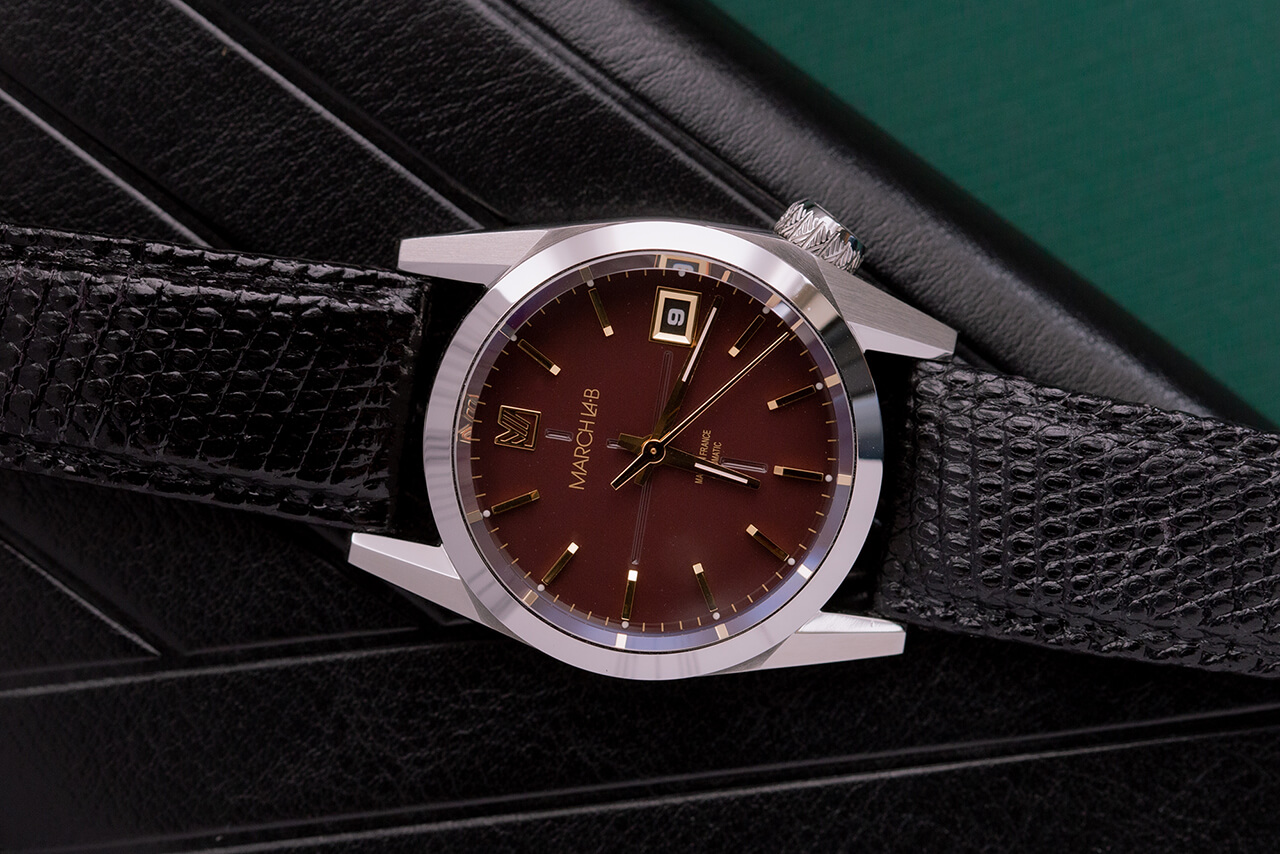 You expect a little bit of savoir faire from the French. A little bit of, not necessarily style over substance, but certainly a position at the forefront. It’s what you find in every Parisian couturier and reflected nicely in March LA.B.

That’s not a typo by the way; the LA.B in the name stands for Los Angeles and Biarritz, the two spiritual homes of the brand, and should go some way to explaining what it’s all about. On the one hand, contemporary style, on the other, vintage influences.

Out of all their watches, I’d say that none is more emblematic of that dichotomy than the AM69. Sure watches like the Agenda have their racing style and the AM2 is pure 70s nostalgia, but this piece in particular is a new twist on the whole retro zeitgeist. 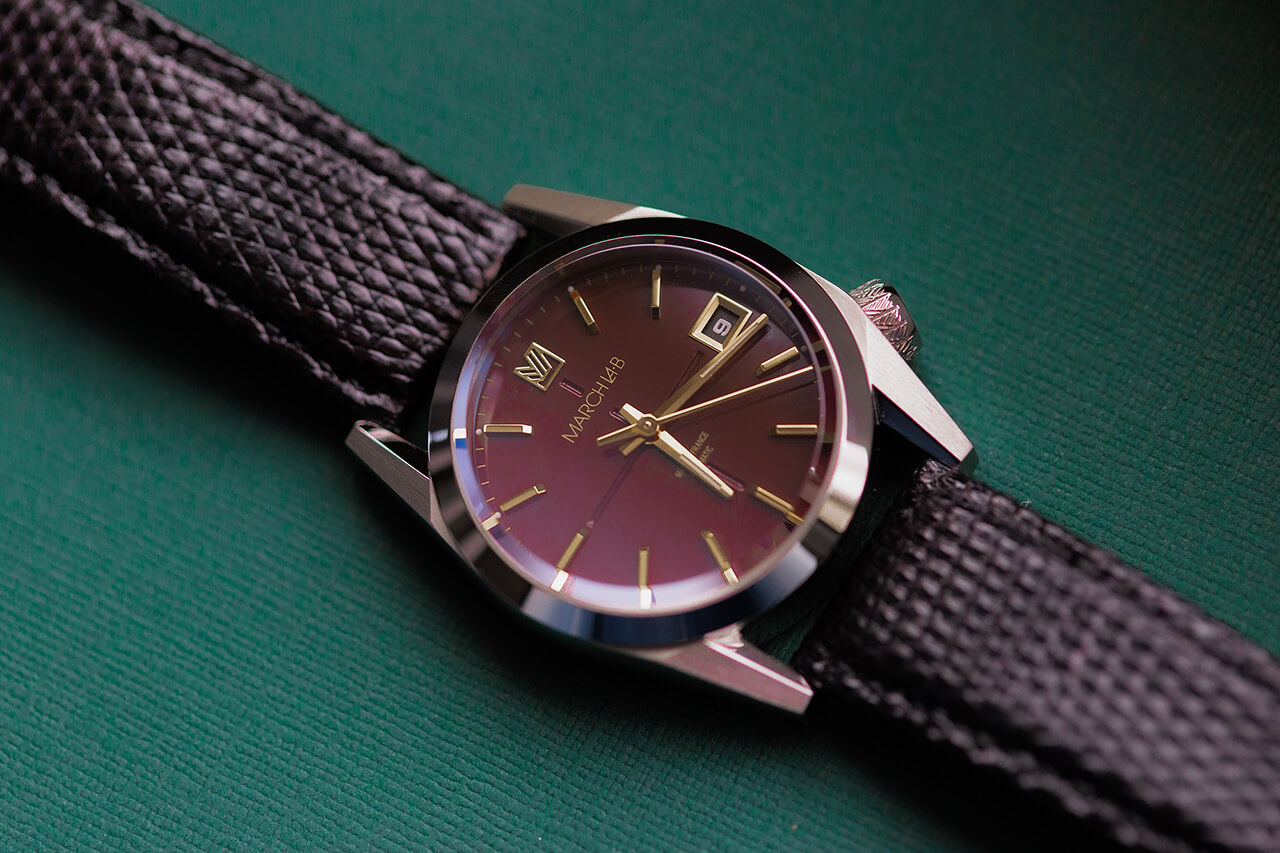 First off, it’s size. At 36mm it’s a proper vintage size, one that a fair few guys might find a little bit too small at first. I can see why; even on mine it looks dainty. However it wears far, far bigger. That’s because the lugs are longer than you expect. It’s a nice compromise as far as I’m concerned, just don’t give it a go if you’re particularly into your macho timepieces. 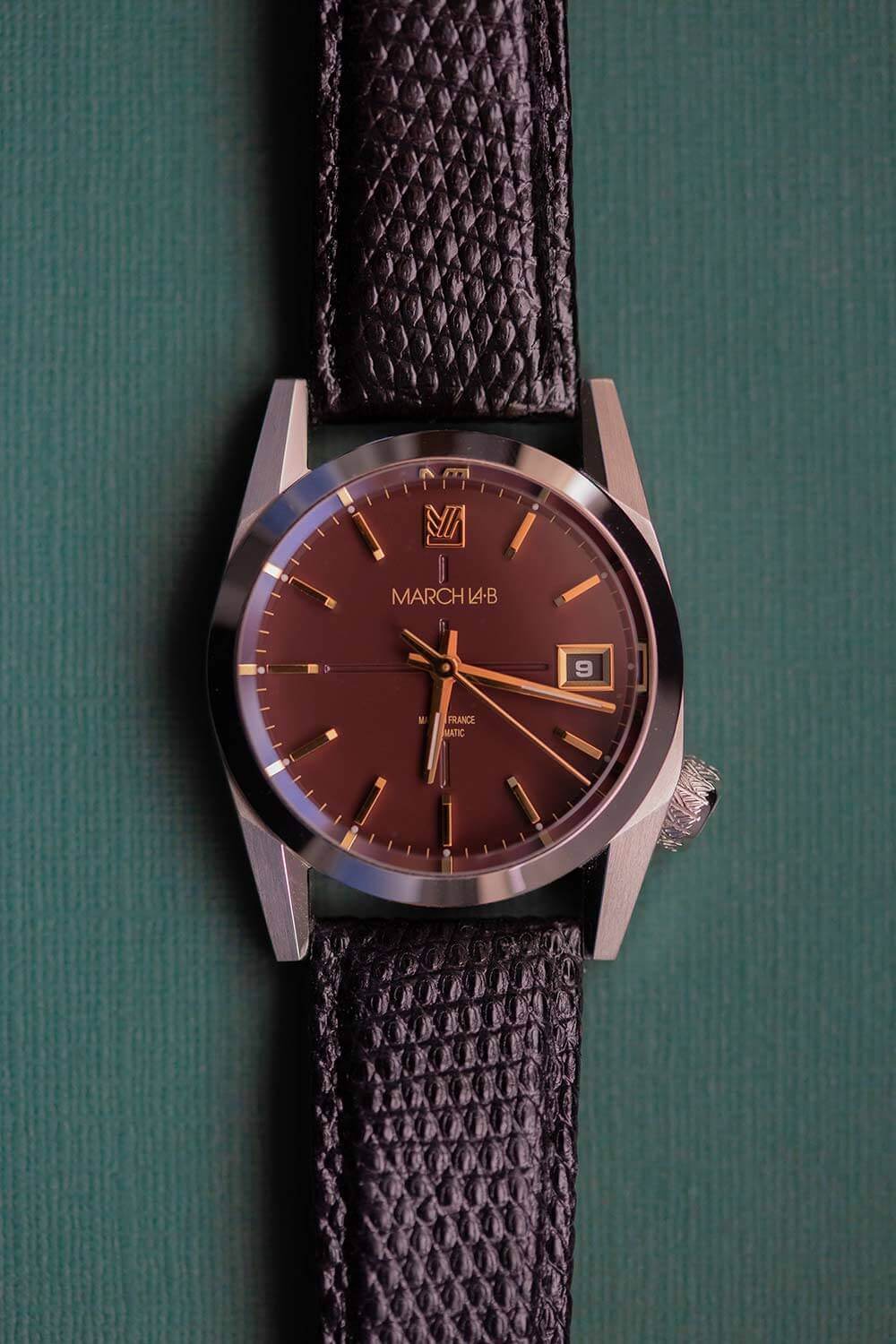 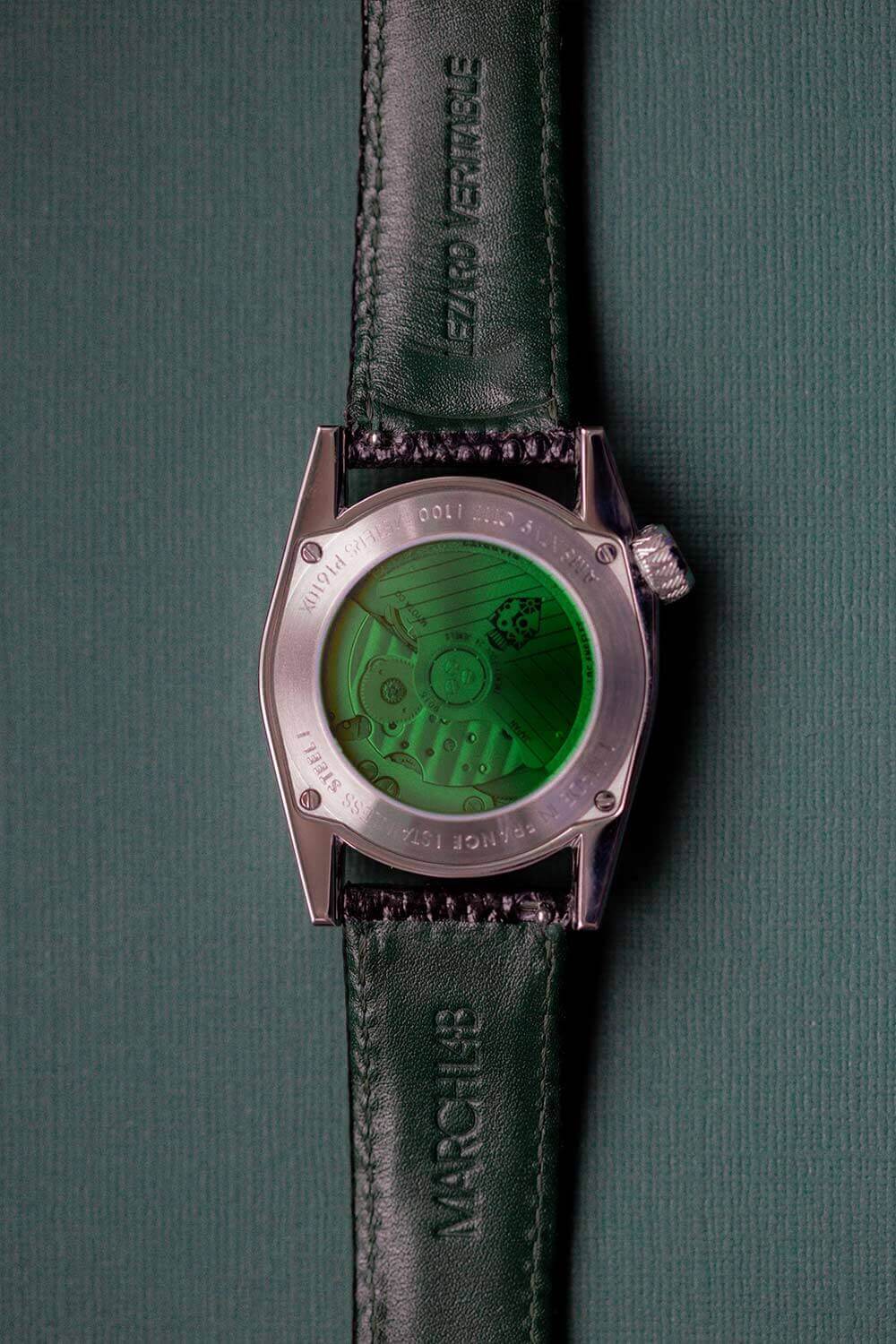 As for the look of the thing, it’s not hard to see that March LA.B has lavished its creative attentions on the AM69. Between elongated lugs and round bezel there’s another geometric layer that peeks out around the sides of the watch, giving it unusual facets.

The dial is beautifully pared-back, in this case in a lovely burgundy colour that pairs nicely with the gold indexes. Even the date window is custom to March LA.B, all to the good. 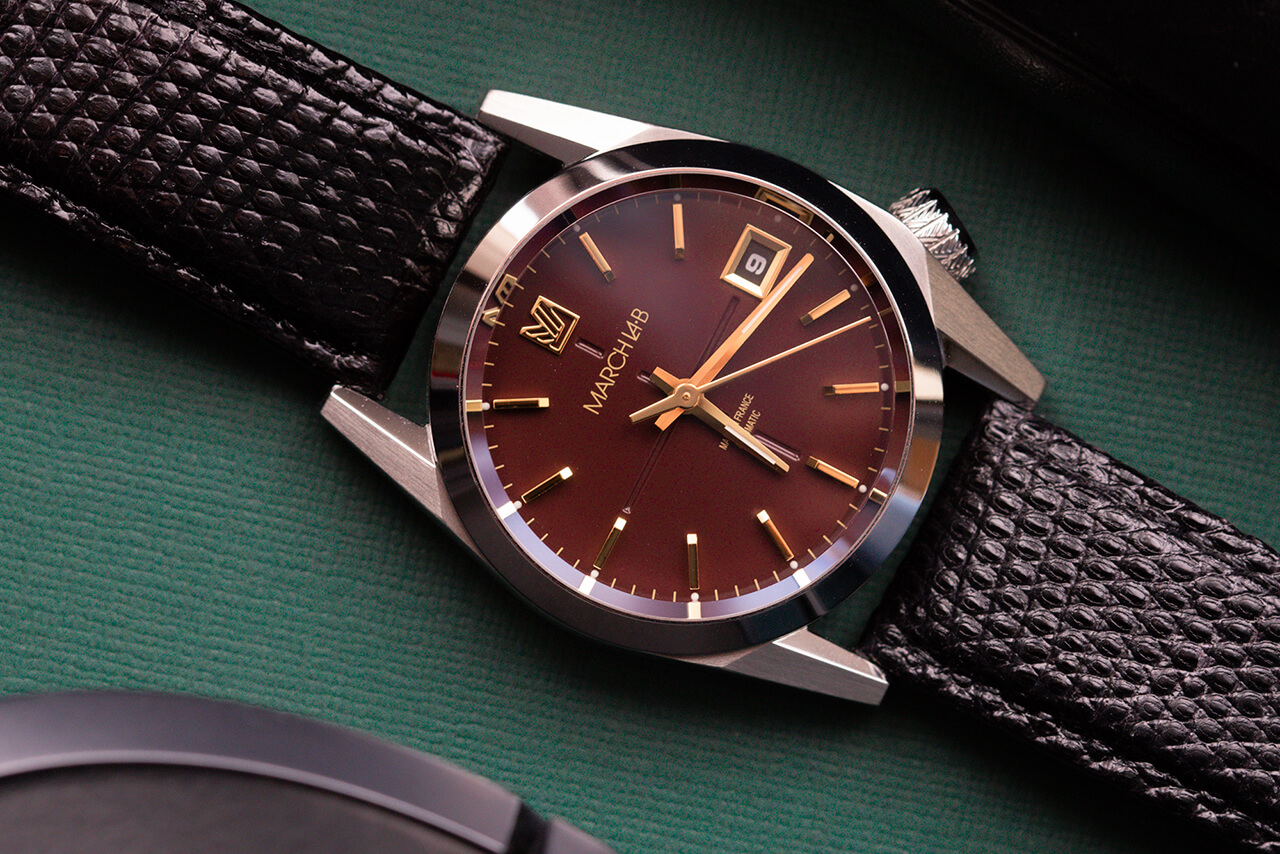 In fact, there’s only one place I think perhaps the design goes a little too far and that’s the crown. I don’t mind an asymmetrical crown at all, I generally think they look great; here too. It’s just that here the crown has found its way partially into the lug. I found it pretty awkward to use, even off the wrist as, despite the detailed grip, it was hard to get a hold of.

Whether it’s worth the minor annoyance for the look of the thing I’ll leave up to you. For me it was, but then this is a time and date-only watch which I don’t tend to fiddle with as a rule. At least it gives the AM69 a nice, unique twist where most retro-inspired designs are anything but inspired. 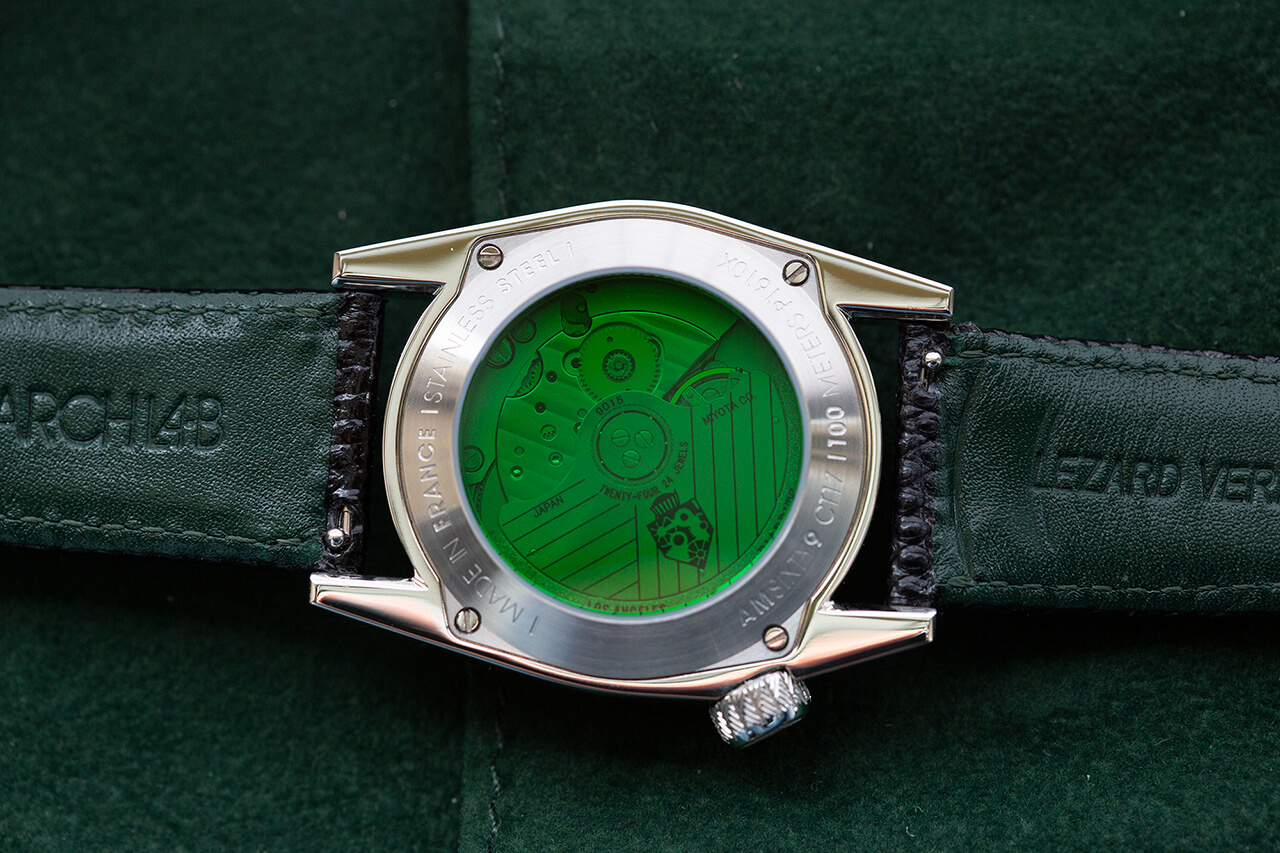 Inside is a simple Miyota 9015 calibre automatic movement with a 42h power reserve, nothing spectacular but an automatic movement nonetheless. You can even see it through the caseback which, as is a little March LA.B trademark, is in green. The movement’s not much to look at, so it works pretty well.

The benefit the movement does have though is lowering the price bracket. Despite its cool, thoughtful design and automatic nature, the AM69 clocks in at €1,245 – just under £1,000. If you’re looking for something out of the ordinary but still bang on-trend in the watch world, that’s well worth giving a try.