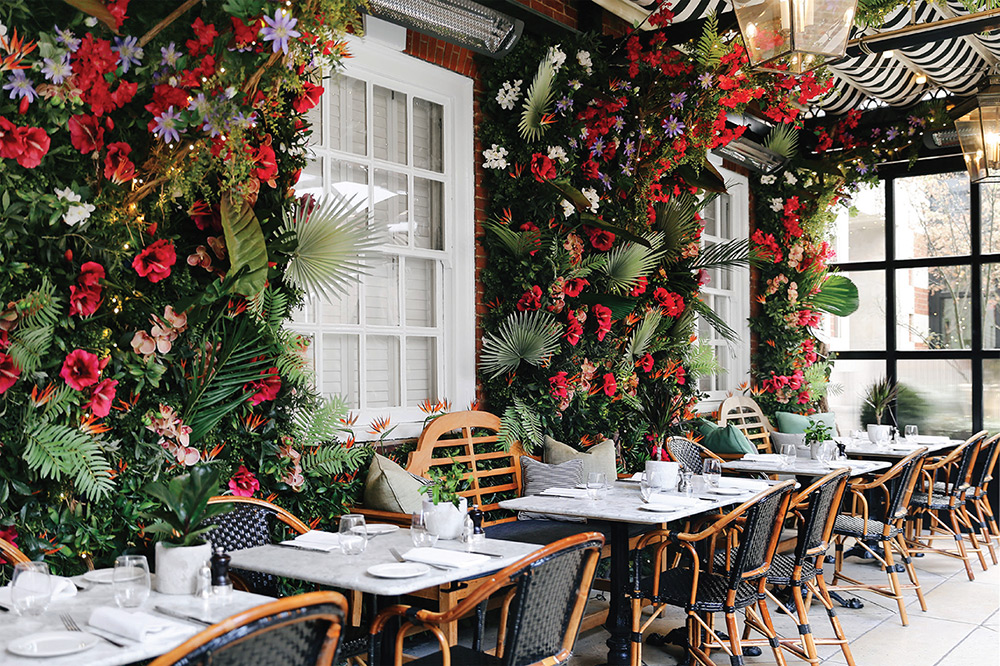 If you have an Instagram account, the chances are you’re well acquainted with Dalloway Terrace and its floral seating area. A bottle of Gavi was swiftly ordered as we perused the menu. It wasn’t long before burrata, Devonshire crab on toast and asparagus with quail’s egg and hollandaise appeared. Burrata is always a dream and the crab was very tasty but I must say the asparagus married with hollandaise and egg was special. It was light, flavoursome and had me mopping up the yolk – everything you want from your starter, really. Usually the vegetarian dishes do not stand out against steak or fish on a menu but the green risotto certainly did. Someone who struggles to eat their veggies would find this a nightmare but I lapped up the green goodness, amongst slabs of Parmesan and pecorino. The star of the show, for me was the sole. Arriving on the bone (though you have the choice for it to be removed, I just wanted some dinner theatre) and simply garnished with lemon, it was incredible. I could have eaten another but I had truffle fries and spinach on the side to complement my meal. The food was delicious but I’d recommend the fish or the risotto over the burger, which let the side down ever so slightly. Dessert brought things back around again, as we had a selection of the chocolate fondant with raspberry coulis – heaven on a plate – baked cheesecake and the mango and lychee cream. Sometimes Instagram demands style over substance. It’s a good thing Dalloway Terrace has both; dallowayterrace.com

As the rent prices in Central London grow, so does my suspicion when new restaurants open in the likes of Covent Garden or Soho. Yet I was intrigued about Zela London, the Mediterranean Japanese fusion restaurant that is the latest addition to the Me London hotel and the brainchild of Enrique Iglesias, Cristiano Ronaldo and Rafael Nadal. Seriously. The atmosphere in Zela is great. Some might find the restaurant’s scene loud and hectic but I found it to be vibrant and exciting. Dishes that stood out included the toro (fatty tuna) tartare with egg yolk and a selection of sashimi, nigiri and our tempura shrimp roll. Thankfully they were kept simple, something most fusion places can’t stick to. On the meatier side, the wagyu teriyaki had been marinating for 48 hours and just fell of the bone. Dessert was cheesecake ice cream and hibiscus sorbet. Not the finest dining you’ll find in London but it delivers on good food, colourful ambience and a fantastic evening; zelarestaurants.com 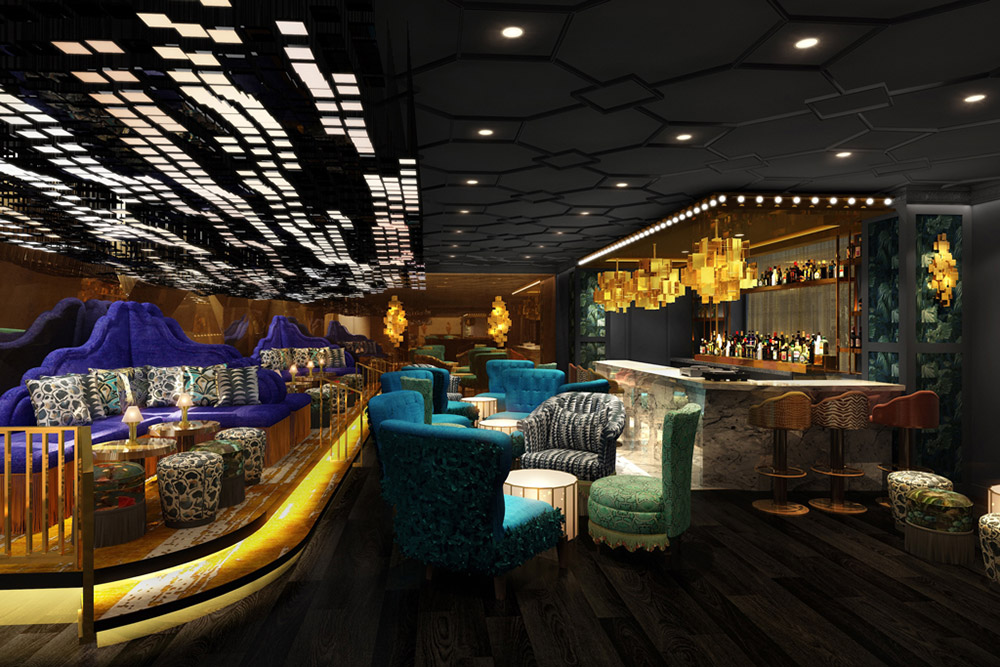 Park Lane’s new members’ club will be open – you guessed it – 24 hours a day, in fact a relaunch of the Colony Club. It will offer a retro Hollywood décor. The bar is small and discreet for day drinks but will transform into an upbeat, contemporary cocktail space when the sun goes down. The first floor restaurant is home to one Japanese menu, and a second menu fusing South East Asian and Middle Eastern cuisines. Aiming to be elegant yet unpretentious, with a W1 postcode we can’t wait to see for ourselves; 24mayfair.co.uk 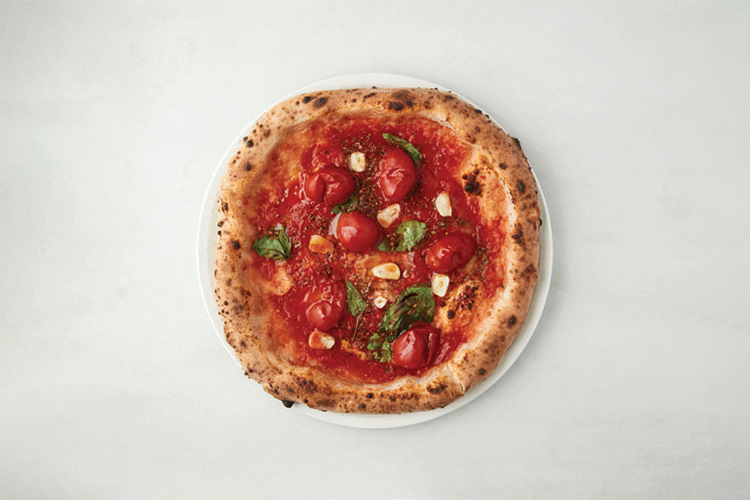 Trendier than its original London Bridge location, ‘O ver has come to Piccadilly with saltwater pizzas and foodgasmic tomato sauce in tow. Ask the waiter to order you a selection of the starters and you’ll be brought fried mozzarella, aubergine parmigiana, frittatina and their saltwater focaccia. Oh and you know what isn’t overrated? The truffle burrata. You can thank me later. Sit back with an aperol spritz as you figure out how you’re going to waddle home; overuk.com

5. Events at the Court 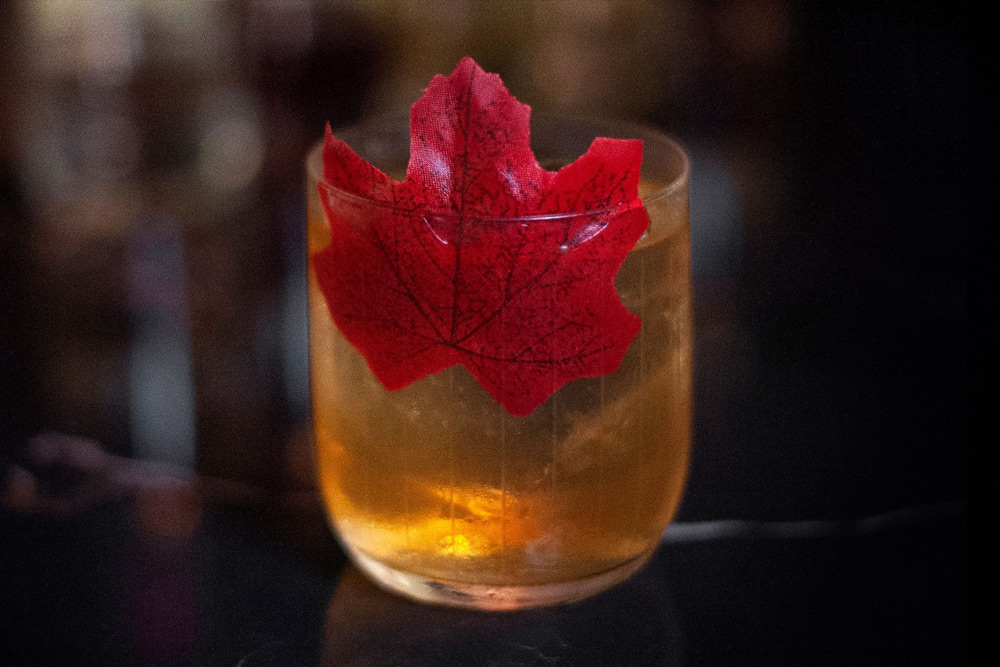 The new members’ club opened earlier this year on London’s Kingly Street but has started to offer exciting events to its guests, which previously included a retro cocktail night in support of Eurovision. Canine lovers should mark the last Saturday of each month in their diary, as there will be the Wild at Heart Dog Day charity lunch, whilst every Thursday will see Fat Tony on the decks. Their cocktails, created by Mr Lyan Studio are also on point. It’s the perfect getaway from rowdy Soho; thecourt.co.uk

When I heard Andrew Clark and Jackson Boxer were doing a brunch menu, my expectations were high. The Hair of the Dog cocktails are all delicious especially the take on a rhubarb sour. We shared the salmon, avocado and eggs, which came with a creamy beetroot dip. The food’s never disappointed before at St. Leonards and fortunately it hasn’t started; stleonards.london

Championing sustainability in food, Mr Lyan’s Cub restaurant believes in letting nothing go in the bin. Starting the meal with a twist on a peach daiquiri and Champagne with water jelly, the starter was a plate of fresh radishes from a farm in Cambridge with broad bean butter. It was a fascinating learning experience, as well as a culinary one, and dishes such as the pea and onion miso broth were truly tasty. The pea flower came from Kent and the miso was made from green lentils, right here in London. The E5 Bakehouse supplies the bread and the butter is made in-house. Boy was this a great course; not only were the bread and butter soft and satisfying, they were accompanied by pullet eggs – those from underdeveloped hens that don’t meet regulations to be sold to consumers as they’re too small. They are however (arguably) the tastiest of all, and a gorgeous tangerine colour. These ones were cooked in beef fat and my, were they heavenly. I left full and spent the Tube ride home dreaming of leftovers; lyancub.com 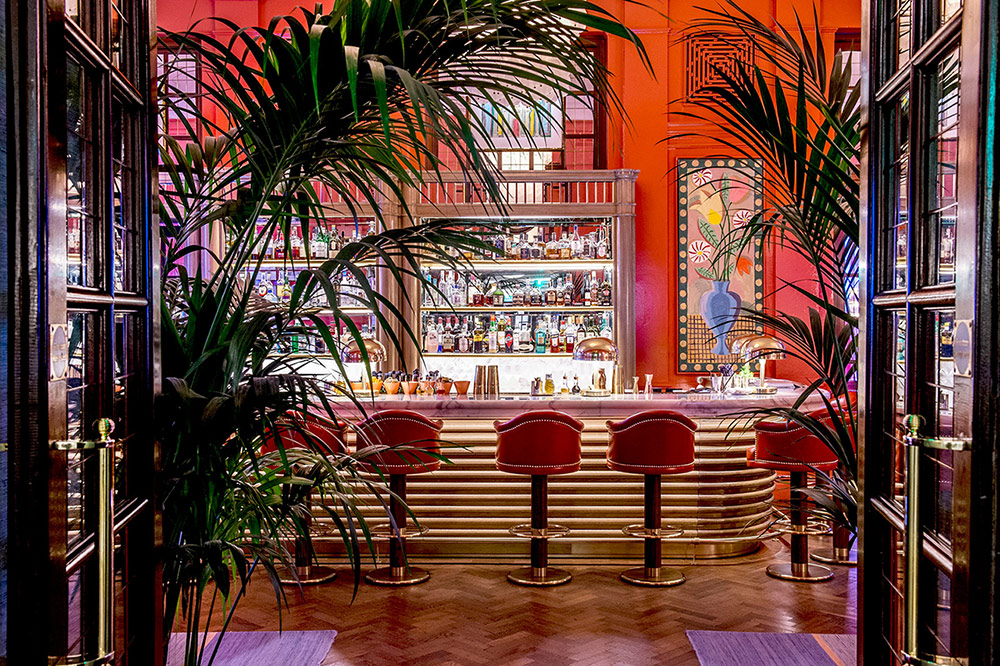 Do you remember what life was like before The Coral Room? Before the ambient orange lights and creative cocktails that set up shop next to Dalloway Terrace graced us with their presence? Me neither. It has become one of London’s most iconic drinking spaces, offering great atmosphere, friendly service and quality drinks. Well it’s turned a year old – that went fast – and has some stellar new drinks to celebrate. Pay a visit to try the likes of rhubarb slushies, cinnamon cream drinks and more. Go on… paint the town coral; thecoralroom.co.uk 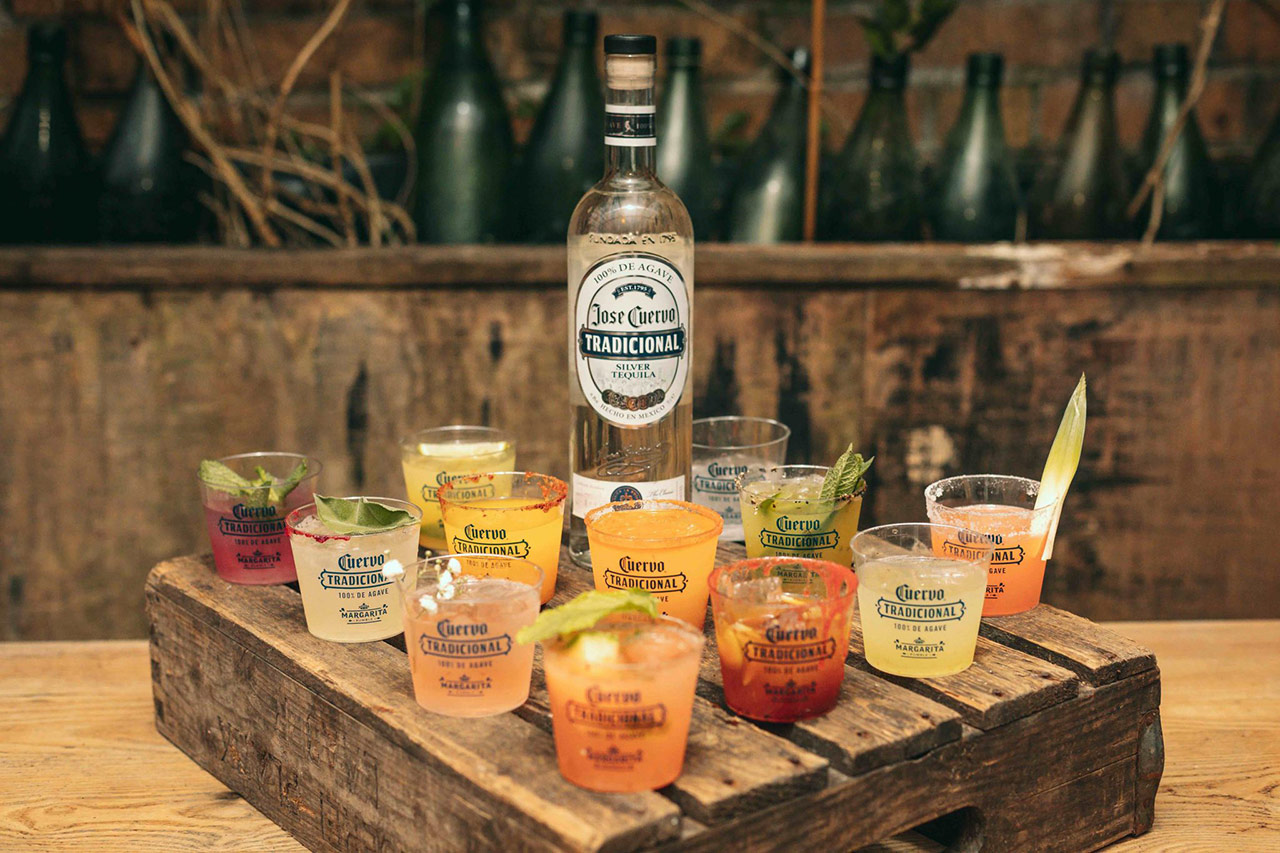 A fan of the tequila-based cocktail? Head to Nine Lives bar in Bermondsey to sample what was voted the best margarita in London in the annual Cuervo Tradicional Margarita Rumble competition. The ‘No Mames Guey’ margarita contains agave sage syrup, lime juice, spiced grapefruit cordial and soda. A dehydrated lime wheel is used for the garnish and hibiscus salt for the rim of the glass – to keep things edgy and interesting; ninelivesbar.com 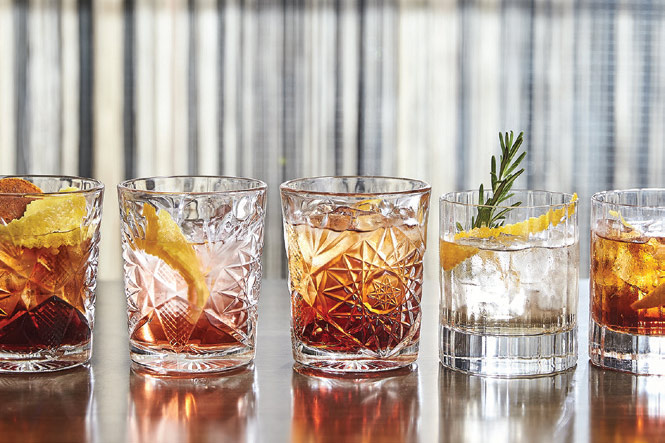 In 1919, Count Camillo Negroni invented his namesake drink after complaining that his Americanos (a vintage Campari, vermouth and soda cocktail) was too weak. To celebrate its 100 years, Osteria at the Barbican has organised a series of masterclasses where you can learn to make three variations of the classic yourself as you gorge upon a platter of aperitivi; barbican.org.uk/your-visit/eat-drink/osteria

From the first food stall just off Brick Lane, to bricks and mortar in Tooting, Orange Buffalo has come leaps and bounds. With a new site in South London, the chicken wing specialists will be bringing their signature dishes but, in addition, will add chicken burgers and vegan alternatives (wings made from cauliflower) to the menu. If you think you can take the heat, try the Viper Wing which requires a disclaimer to be signed pre-ordering. I’m not that hardcore; the Mango Habanero were enough for me (sweet at first before a strong, hot kick). Still, the K-Town with gochujang paste, soy and sesame were my favourite; theorangebuffalo.com