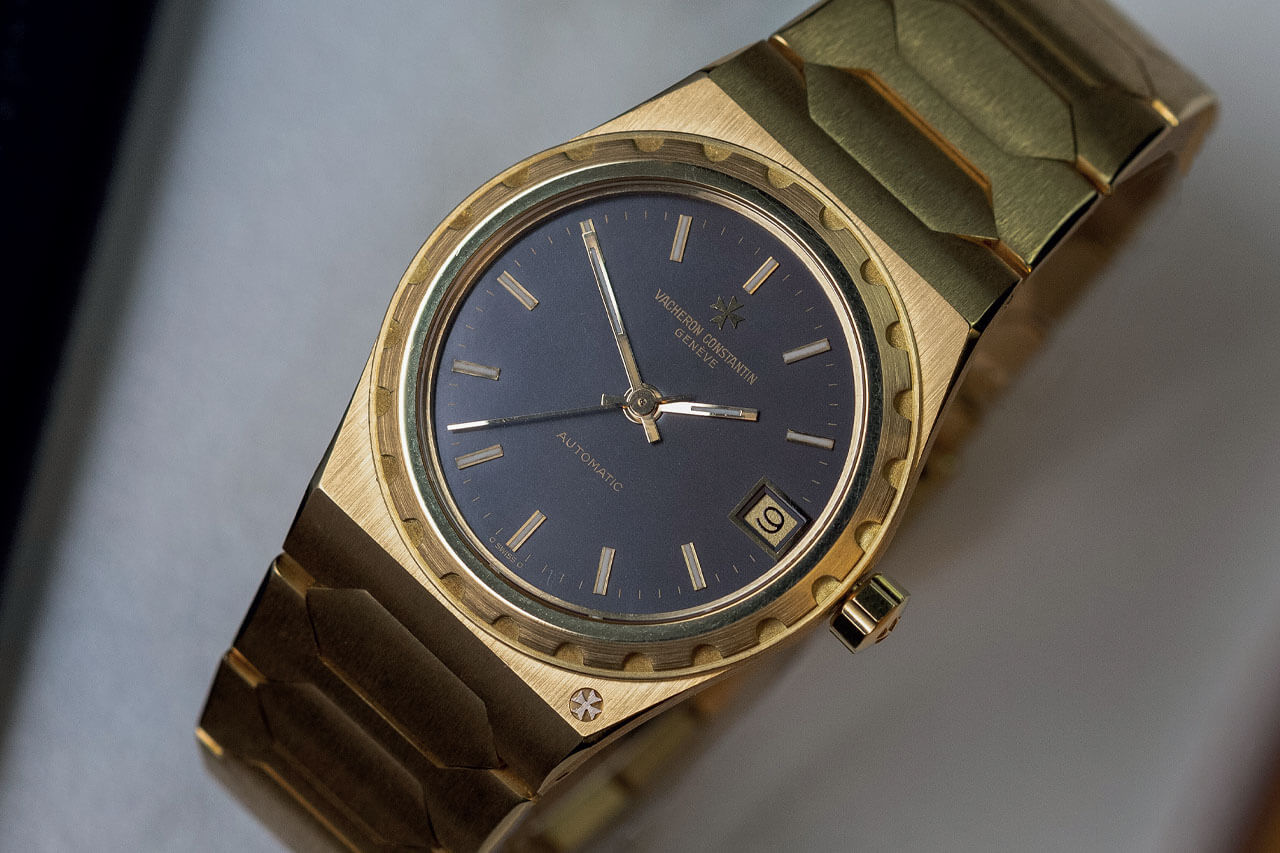 Launched to celebrate Vacheron Constantin’s 222nd birthday (and fulfil their dire need for a Nautilus equivalent) the 222 was such a fantastic sports luxury timepiece with its integrated bracelet and notched bezel that the Jorg Hysek design is still to this day mistaken for a Gerald Genta original. Fast forward to the present day and the Overseas, which was developed as a direct aesthetic successor to the 222, is one of Vacheron’s most important timepieces. Needless to say, the original 1970s design is going through a bit of a renaissance.

In fact, they’ve been showing up at some of the biggest auctions in the world over the past couple of years and look about ready to explode. The one we have here is actually from Vacheron themselves as part of their Les Collectioneurs, essentially their in-house vintage boutique. That means you can be sure of its flawless condition inside and without all the paperwork accounted for. Sure, there’s a slight premium, but given the 222s enduring appeal, having it assured by the maison that made it is worth a little extra. 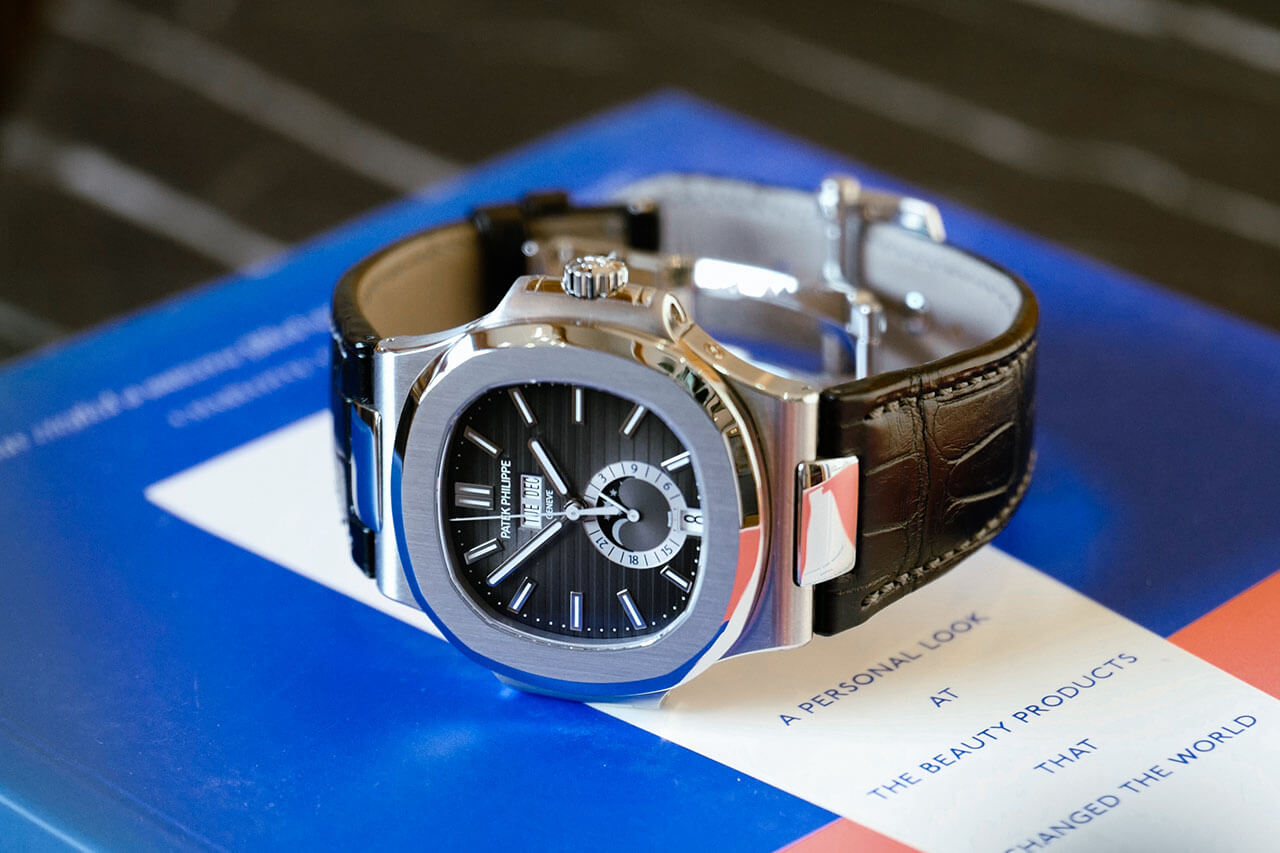 Honestly, good luck getting your hands on a time-only 5711. If the watch weren’t hard enough to get hold of before this month then the news that it’s been discontinued has sent things into the stratosphere. However, branch out just a little and for less money – and a great deal less frantic searching – you can get yourself this, the 5726A-001. It’s still a Nautilus, it’s still in steel and it still has that cool, decking-esque dial.

It is a little smaller than the 5711 at 40.5mm, but still has the muscular, Genta-designed build that’s made the series one of the most sought after in horological history. The main difference though is that this includes an Annual Calendar. As 5711s become harder and harder to find, we may well discover collectors branching out and realising that pieces like this are a lot more watch for the money. A more complicated movement, the same good looks and at least £30,000 less, what’s not to love? 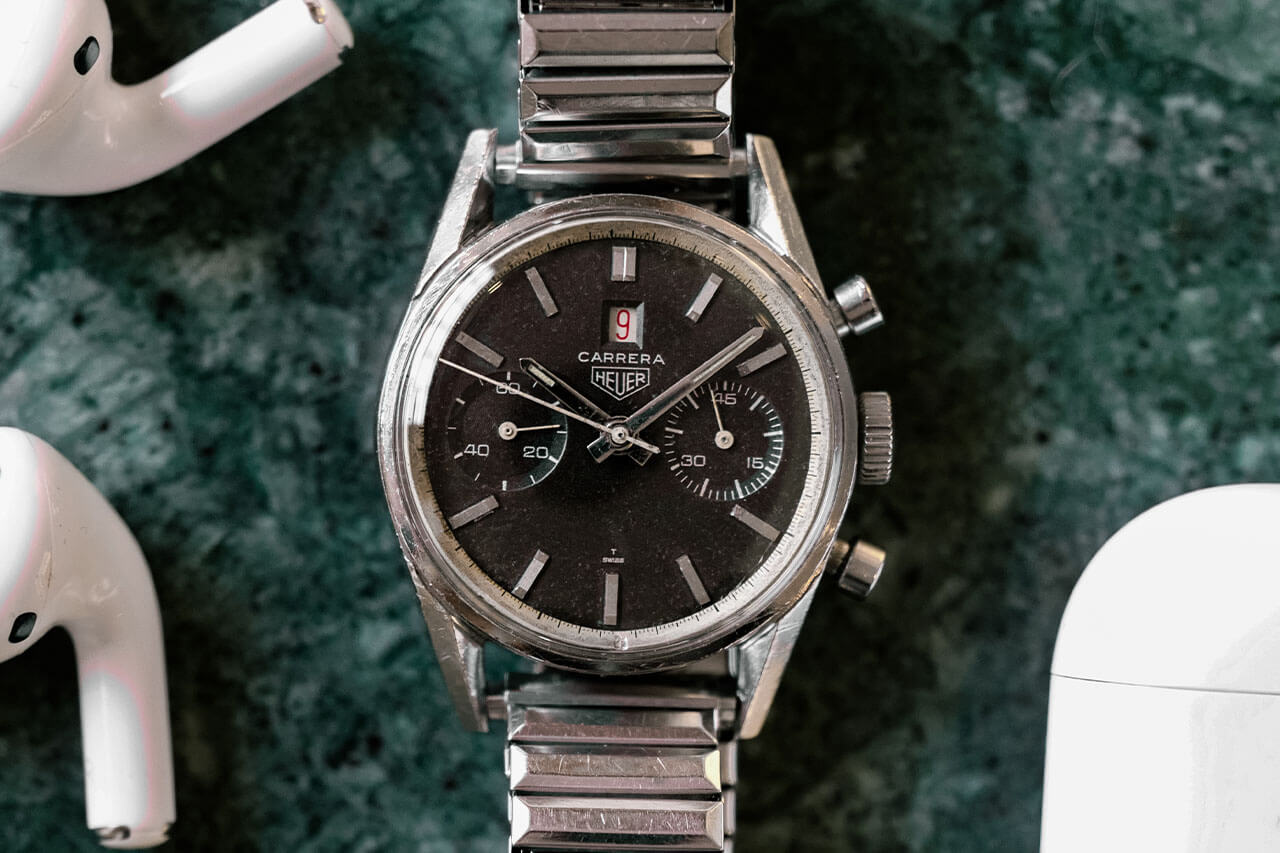 Of the three legendary racing chronographs still around today – the others being the Zenith El Primero and Rolex Daytona – the Heuer Carrera was the one that really broke new ground. Designed by Jack Heuer in 1963, himself a devotee of high-octane racing, it laid out the blueprints for what would become the archetypal racing watch. Fast forward to today and the modern successor to the name looks considerably different. In fact, to get anywhere close to the original design, you need to look at TAG Heuer’s 160th anniversary pieces from 2020, not the Carrera Sport.

Or you could buy in to that racing history with this, the 3147N 12 Dato 45. This 35mm stainless steel chronograph isn’t the first execution of the Carrera, but is very early in its lifecycle, built in 1966. Better yet, it’s one of the most handsome chronographs of the time, with a contrasting white minute track against the black dial and retro bi-compax layout. The hands have been replaced but the movement is as great as ever, a solid buy that lives and breathes racing style. 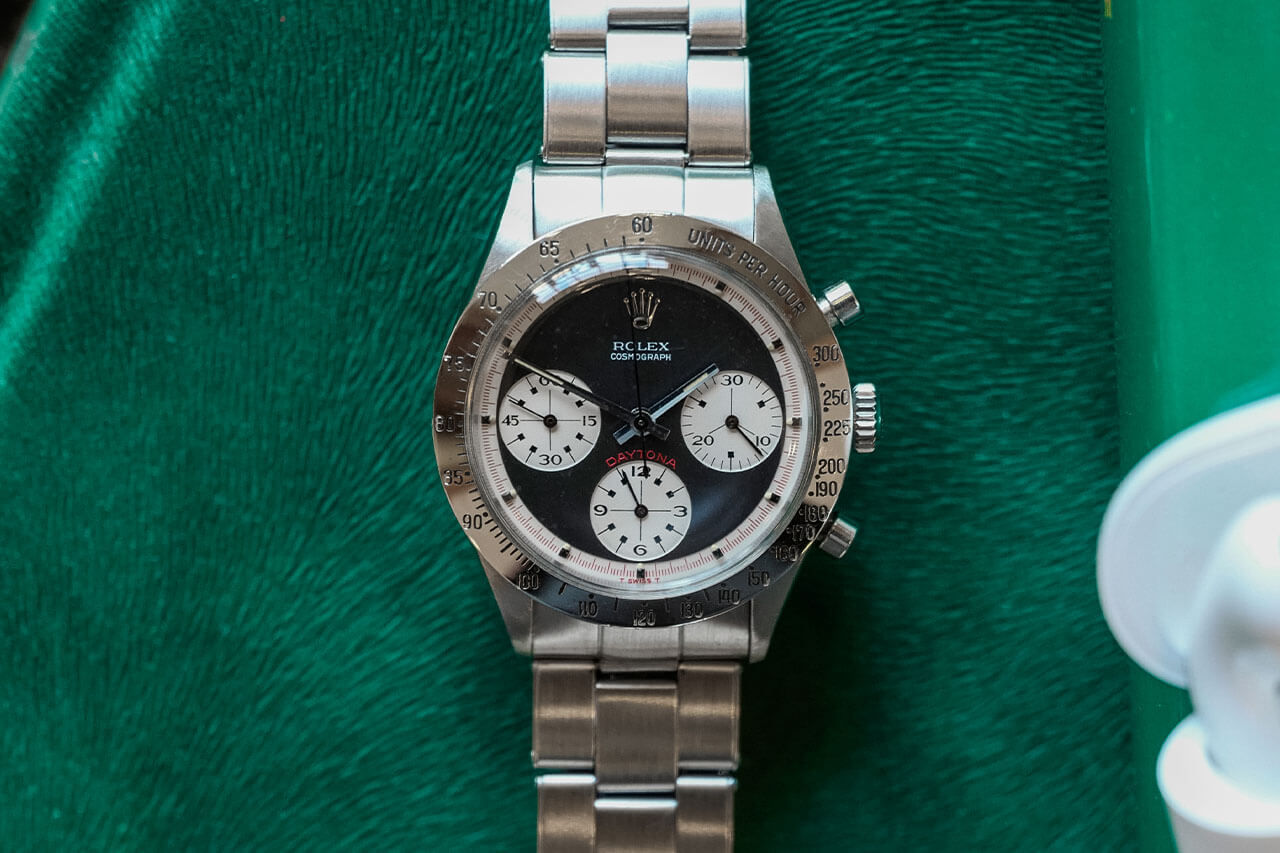 If you have even just a passing interest in watches then you should know all about the Paul Newman Daytona. It’s one of the definitive grail watches, the most sought after of all the Rolex timepieces and therefore arguably the most sought after in the world. This version of the Daytona with its black dial and contrasting white subdials, got its nickname when actor, racer and all-round paragon of masculine style Paul Newman was presented one by his wife Joanne Woodward. That original watch was sold back in 2017 for $17.5 million (approx. £12.3 million), making it the most expensive wristwatch ever sold.

This, unfortunately, wasn’t owned by Newman. It does still tick every other box a collector could hope for. It has the right colours, the right bracelet the right condition, everything about it is on the money. Even the exotic dial is flawless and it comes with its original papers. In fact, this may well be one of the finest Paul Newman watches I’ve ever seen. Which is why the price is POA. I’m afraid you’ll need to get in touch with Xupes if you’re genuinely interested; otherwise, like me, feel free to gaze at it from afar. Sure-fire doesn’t begin to cover it. 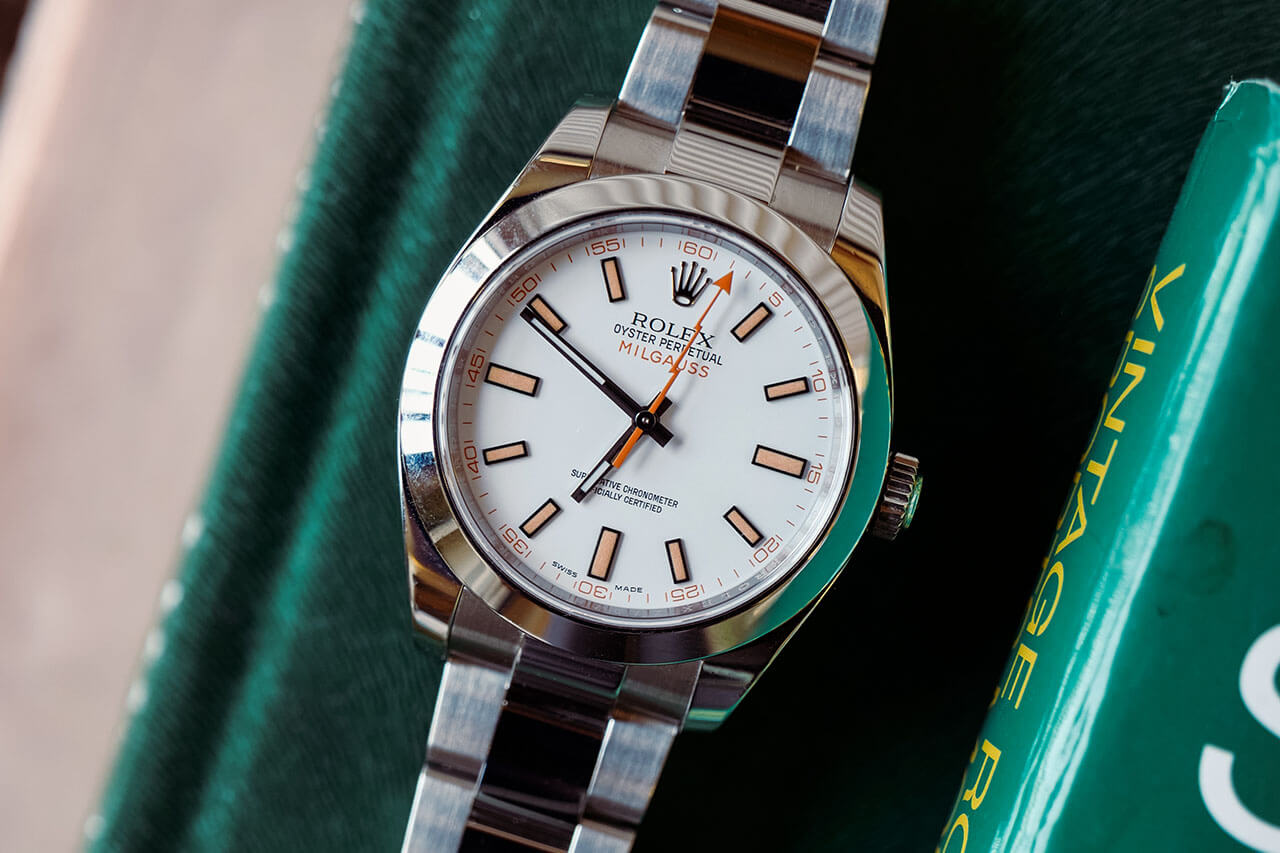 Of all the Rolex steel sports watches that drive collector’s into a frenzy the Milgauss often seems to be forgotten. Honestly, there’s no reason that should be the case. The original Milgauss was built in 1956 and has since been one of the unsung heroes of the Rolex collection, boasting 1,000 gauss magnetic resistance.

The most recent version of the watch is defined by not just its anti-magnetic properties, but by the distinctive green sapphire crystal and is still relatively available by Rolex standards. If you want an investment piece however, it’s worth looking back to the halcyon days of 2016.

Lovely as the ref. 116400GV is, what we have here is the 116400 – or non-GV version – which was discontinued in 2016. It has all the same technical properties, but doesn’t include the ‘glass verte’, AKA the green crystal. Instead, it opts for a more streamlined look with a glossy white dial (the current version is only available in blue or black) and orange indexes a shade lighter than the Milgauss’ signature lightning bolt second hand.

This particular watch is in excellent condition, complete with box and papers, making for an exceptional collector’s piece. Sure, it’s most definitely a modern Rolex, but it’s more subtle than a Submariner, more accessible than a Daytona and overall just a damn cool watch. 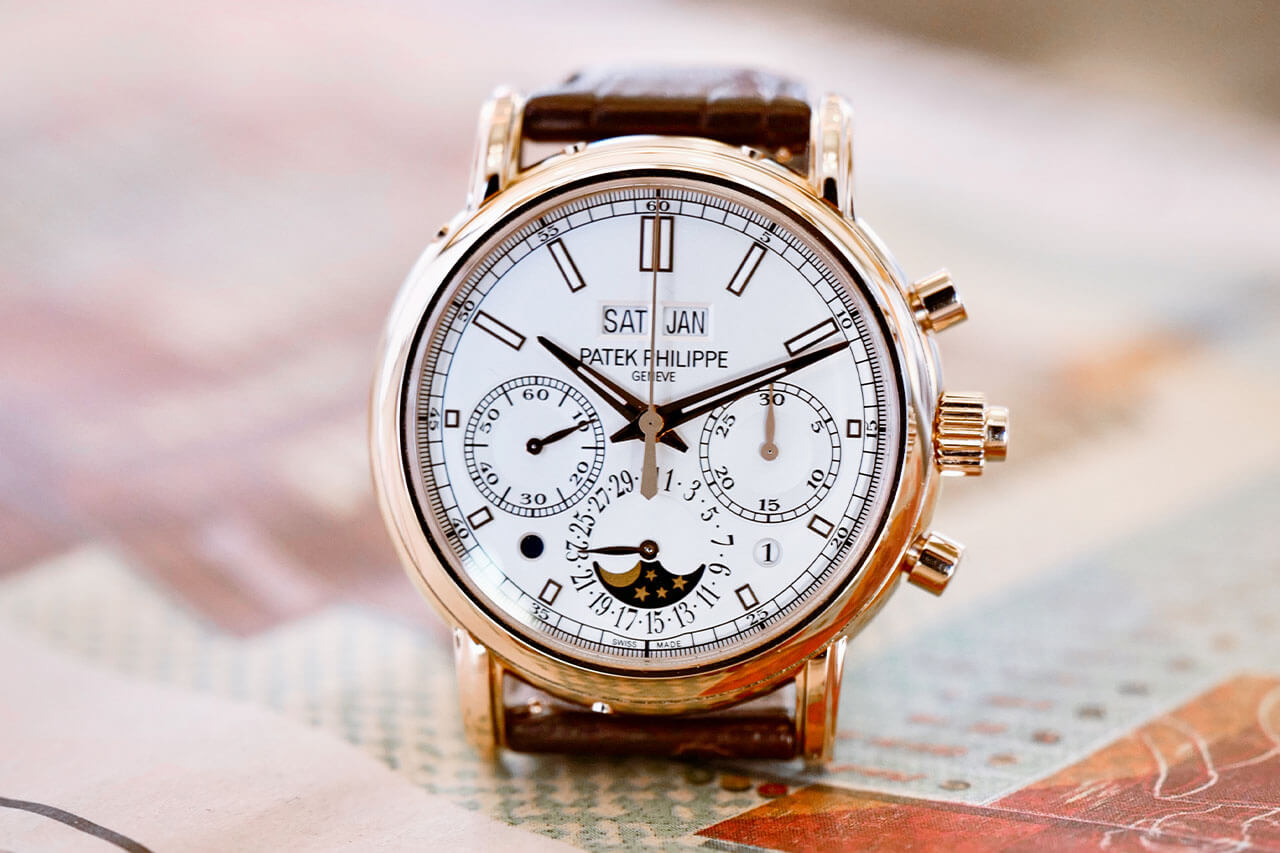 Only a relative handful of Patek Philippe grand complications are built each year with all the lavish attention to detail and haute horology that entails. Given what you get for the money – at any price – they’re certainly worth investing in and this sporty perpetual calendar is one of the finest-looking around. The perpetual calendar itself is wonderfully restrained on the white enamel dial with matching white indexes outlined in case-matched rose gold. It’s beautiful, classical and would normally be more than enough to create a frenzy of interest amongst collectors.

This particular model though has a sporty angle that takes it to the next level: a rattrapante or split seconds chronograph. Featuring one of the most complicated mechanisms alongside minute repeaters and tourbillons, the chronograph is fitted with two second hands which can be stopped separately or snapped back together at the press of a button. It’s magnificent at the best of times, but in a svelte 40.2mm Patek Philippe it’s absolutely stunning. 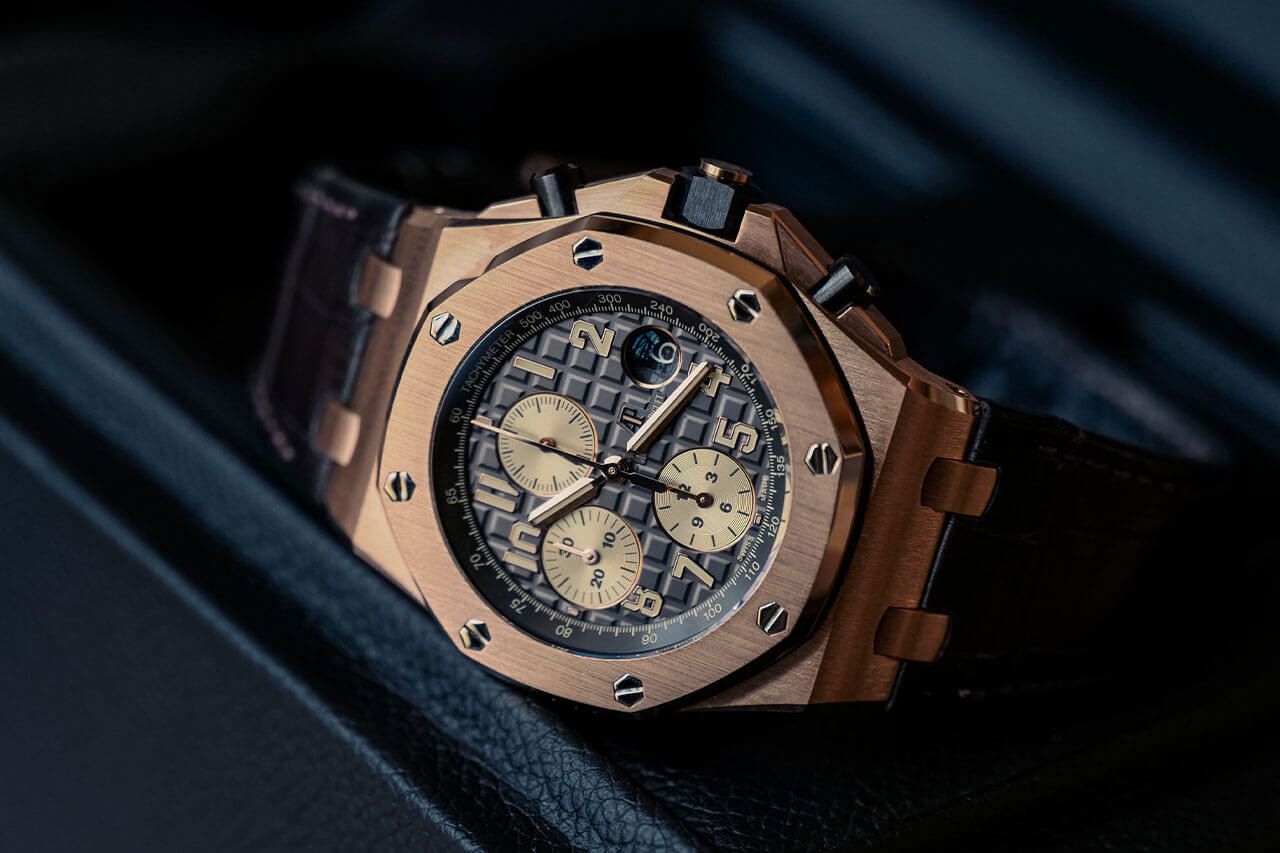 If there’s one thing you can always count on retaining its value, it’s gold. If there’s another, it’s an iconic watch like Audemars Piguet’s Royal Oak. This chunky, 42mm chronograph has plenty of both. Part of the current crop of Offshores, this sportier take on the famous octagonal, industrial bezel of Gerald Genta’s original design takes ‘sports luxe’ to a whole new dimension. On the one hand, the rose gold case isn’t all that practical; on the other, ceramic chronograph pushers and crown shore up the elements that even a careful wearer is likely to bump.

Finished with an incredibly handsome black Mega Tapisserie dial with gold indexes, silver subdials and an oddly subtle tachymeter, the Royal Oak is the perfect watch for a marina-side view of the Dubai Grand Prix. It even has 100m water resistance, if you dared to take it swimming. The bottom line is that this is about as solid an investment as you can get and not just for the sheer weight of gold. Prices for these have been going mental at auction, so best get in there soon. 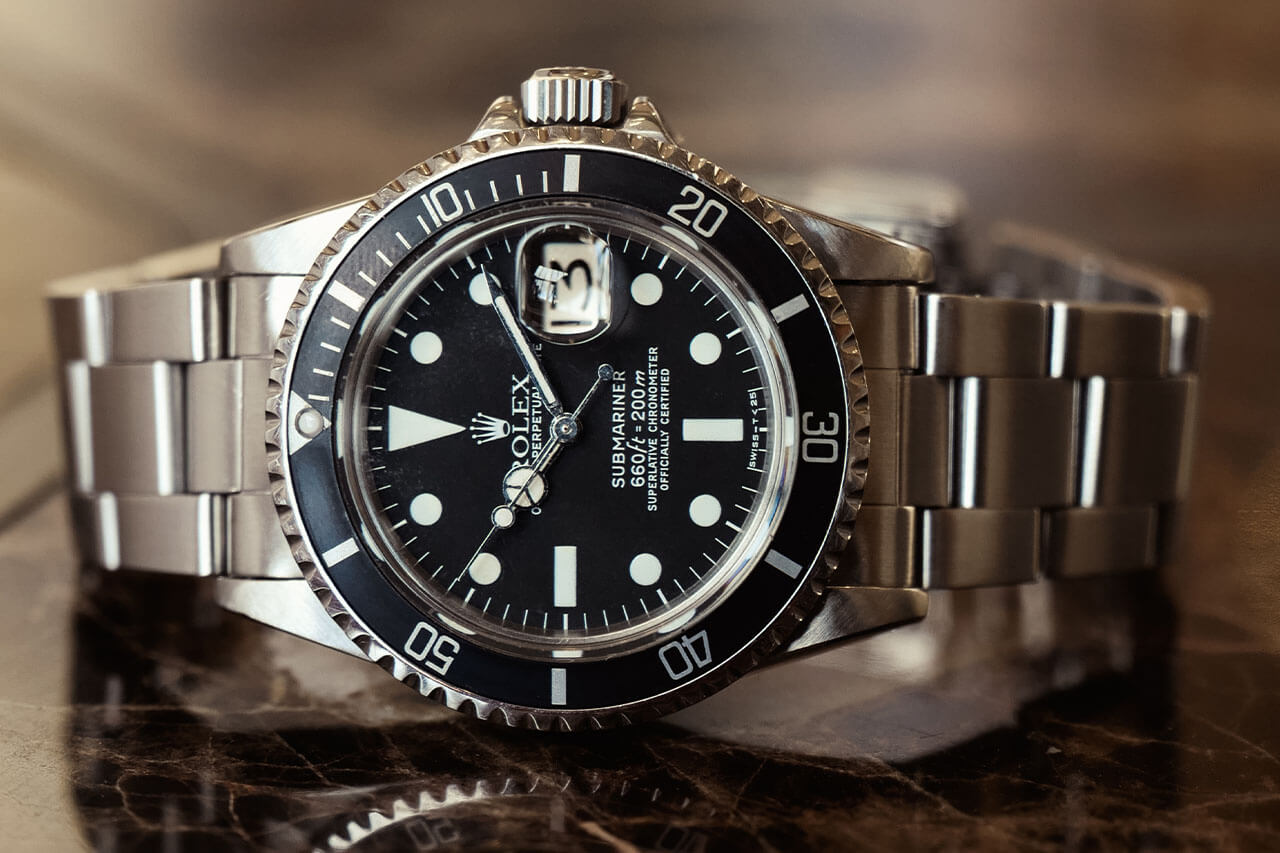 Any Rolex can be considered a good investment, but in the wake of the brand’s revamp of the Submariner, you can be sure plenty of collectors will have their eyes firmly on the original iconic models. Sure, prices for Reds and Double Reds have been astronomical for years, but now even the more accessible models will be in the limelight. Stainless steel case in point, this handsome 1680 Submariner MK 1.

Everything about this late-seventies reference is correct, from the Top Hat plexiglass complete with cyclops magnifier to the Oyster bracelet. The dial is faded of course – the watch is over half a century old after all – but evenly across the board which shows its age rather than imperfections. This particular timepiece has been polished a fair bit in the past and the bracelet is a service replacement from Rolex, so it’s not in mint condition, but it’s still in far better nick than your average pre-loved Sub and as a result it’s as close to a sure-fire investment as these things get – especially at this price. 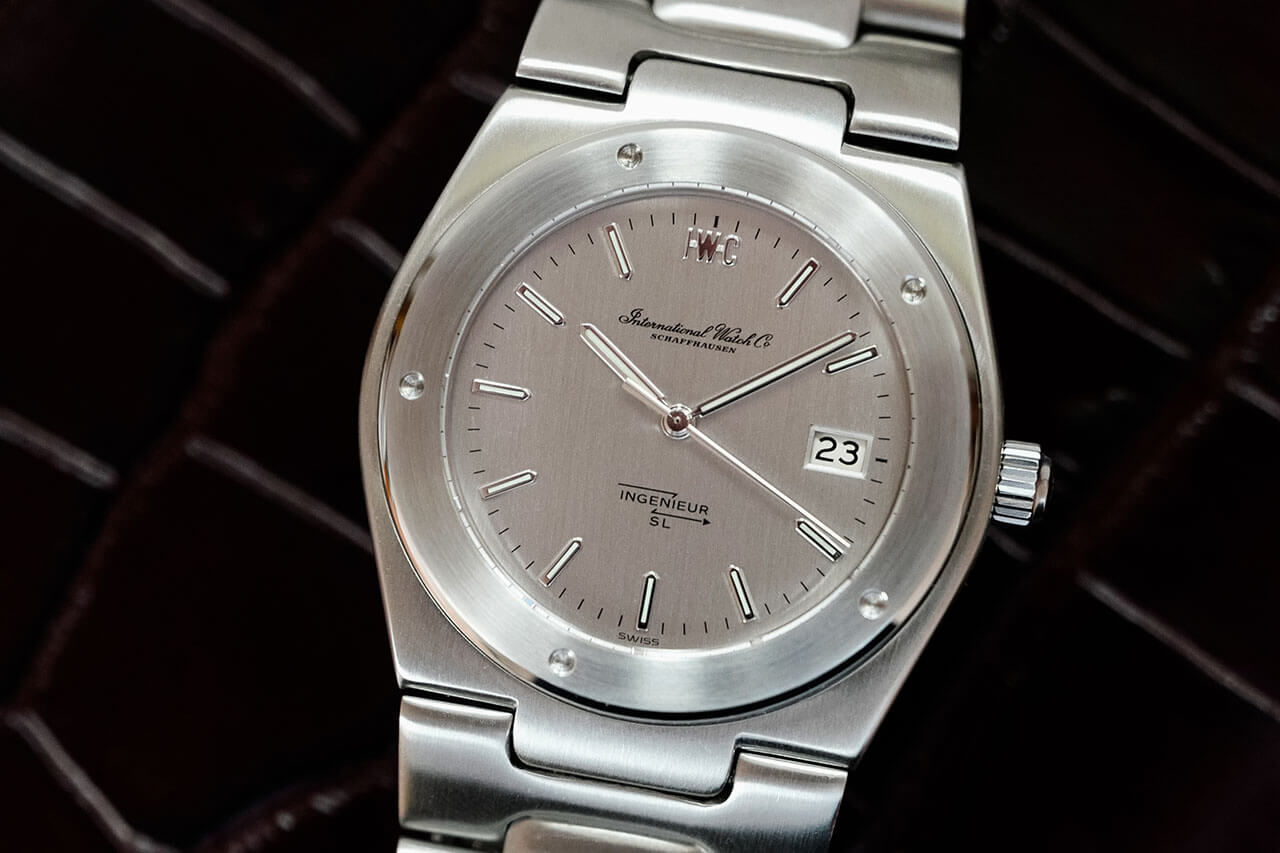 The Ingenieur was originally built in 1954, making it one of the most enduring names in watchmaking. The version that first springs to mind though isn’t quit that old. In 1975, Gerald Genta, patron saint of sports luxe design, revamped the Ingenieur. He gave it a chunky, industrial overhaul in line with the Royal Oak and Nautilus, every bit the potential integrated bracelet icon. For whatever reason, the Ingenieur has never really had the same status as the rest of its designer’s impressive portfolio.

Now though, those original designs are slowly becoming more sought after by collectors, with auction prices continuing to rise in the wake of the current crop of sports luxe imitators. The piece here follows that same Genta design, though it was built a few years later in 1983. A smaller, slimmer take on the design, it was also the first to use a third party ETA movement. That not only makes it a more wearable watch, but it’s also a quirky chapter in IWC’s history – the kind of thing any good collector looks for in a watch. 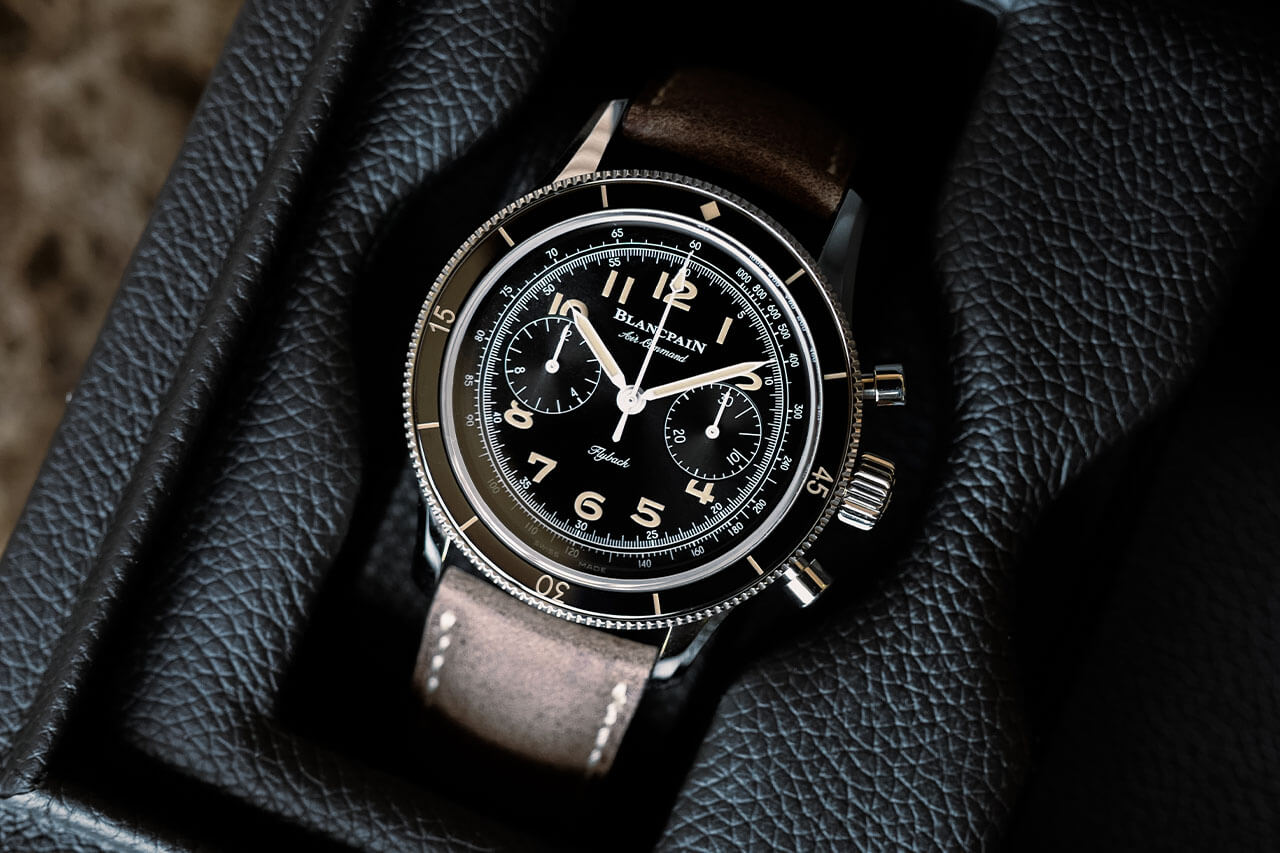 Of all Blancpain’s recent releases, the Air Command Limited Edition is the one that garnered the most attention when launched, partly because it taps into the history of one of the archetypal diving watches and partly because it’s an incredibly good-looking watch. Who wouldn’t want to wear this? The original Air Command is one of the rarest Blancpain references ever built. They were built for the US Air Force and never went into proper production, so as a result only a dozen of them are in existence and command prices up to £75,000. This is not one of those.

Instead, this is a modern but relatively faithful re-issue of the original released back in 2019. It’s obviously far less limited – 500 rather than 12 – and there have been a few updates, most notably the calibre F388B flyback chronograph movement which can time 1/10th of a second. As a fun reference to an inaccessible part of Blancpain’s history it’s a great watch; as a handsome sports watch in its own right, it’s downright lovely.