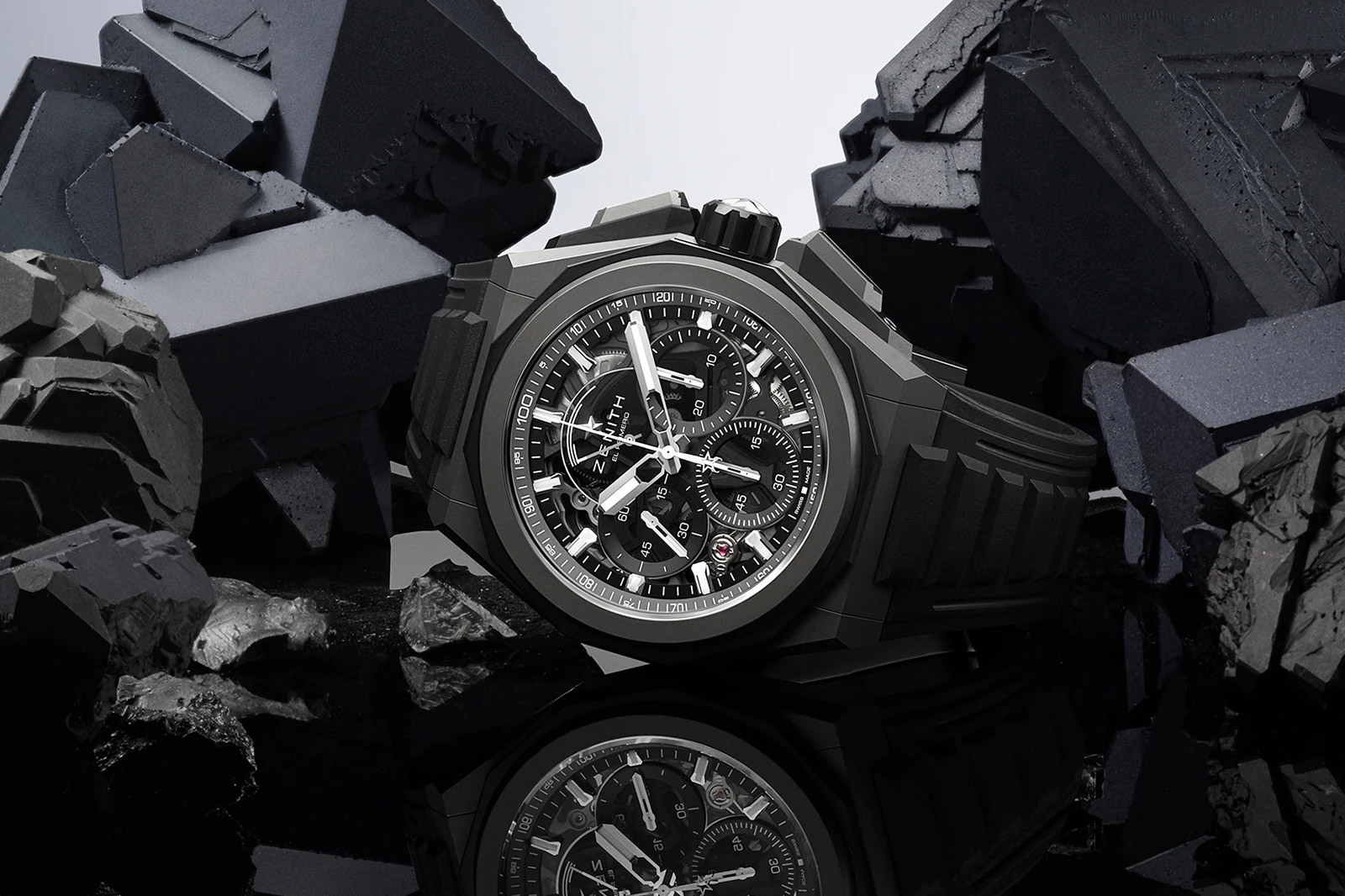 Watches and Wonders has already seen some high concept, daring designs from the likes of JLC and Purnell showcasing the extreme end of haute horlogerie. It’s the perfect environment for Zenith to announce their latest addition to their DEFY range, which is home to their most experimental timepieces and technology. Enter the aptly named Zenith DEFY Extreme.

Zenith’s experimentation with the new timepiece is largely cosmetic, pushing the familiar design principles of DEFY to the nth degree, with three distinct references. The classic, smooth tonneau case shape, seen on the majority of the range, has been sharpened up to create a more robust, faceted silhouette. While angular cases have been seen before on DEFY models like the 1960s’ A3642, this is the first time that it’s been emphasised to this extent. 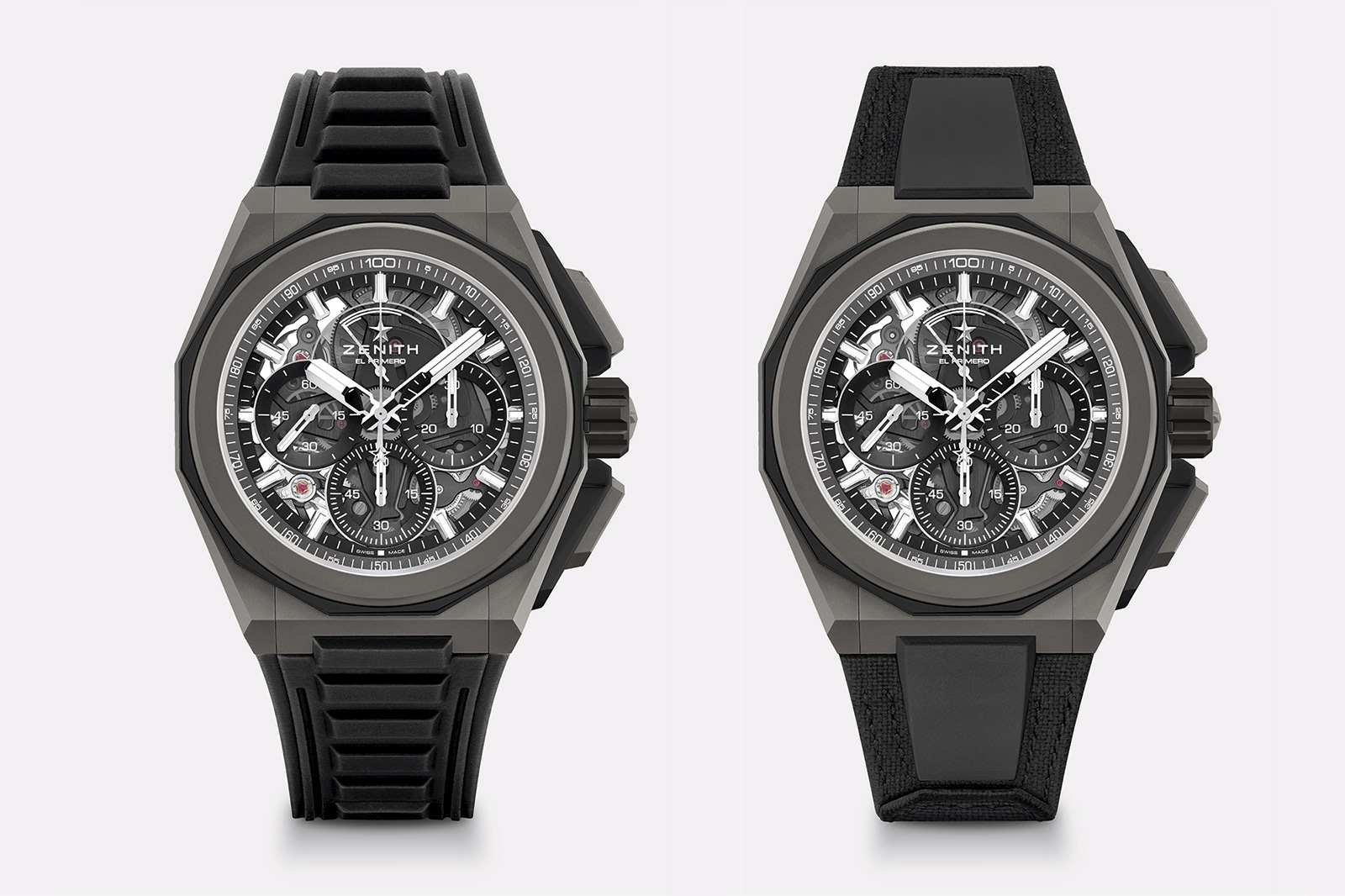 Additional protection has been built up around the pushers and screw-down crown, serving to reinforce the new silhouette and outline, making the piece look sturdier and more durable. Likewise, the 12-sided, faceted bezel ring echoes the shape and extends all the way from the front of the watch to the caseback. The aesthetic is far more futuristic than DEFYs typically go for, but it stays true to their retro-modern style.

The case has a 45mm diameter with 200m water resistance that places it well and truly in the realm of modern watchmaking, where the prevailing thought seems to be bigger is better. That’s not to say previous DEFYs have been dainty but any size increase at this scale is noticeable. The cases on each of the three references are dominantly titanium, although how it’s been finished on each version is different. 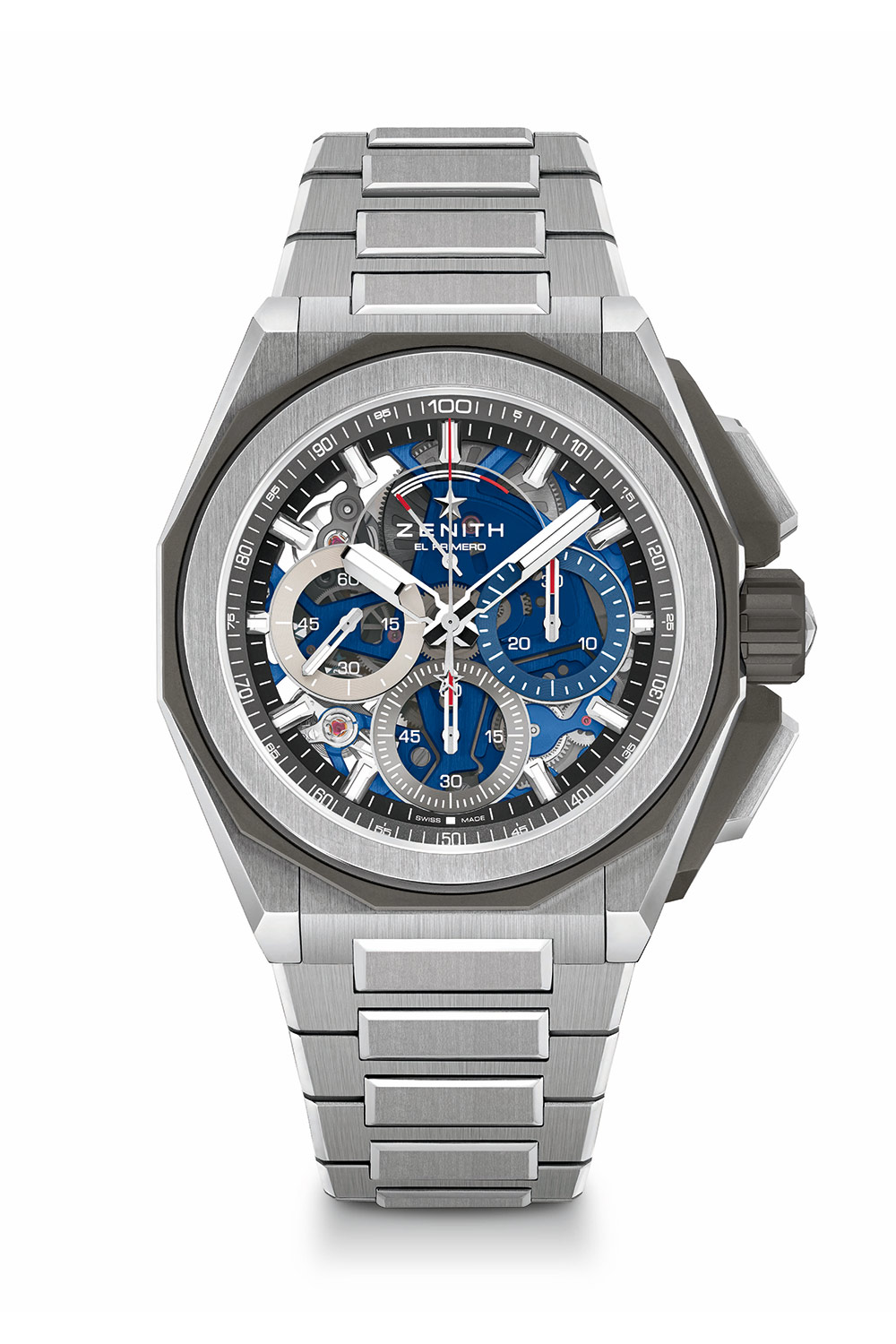 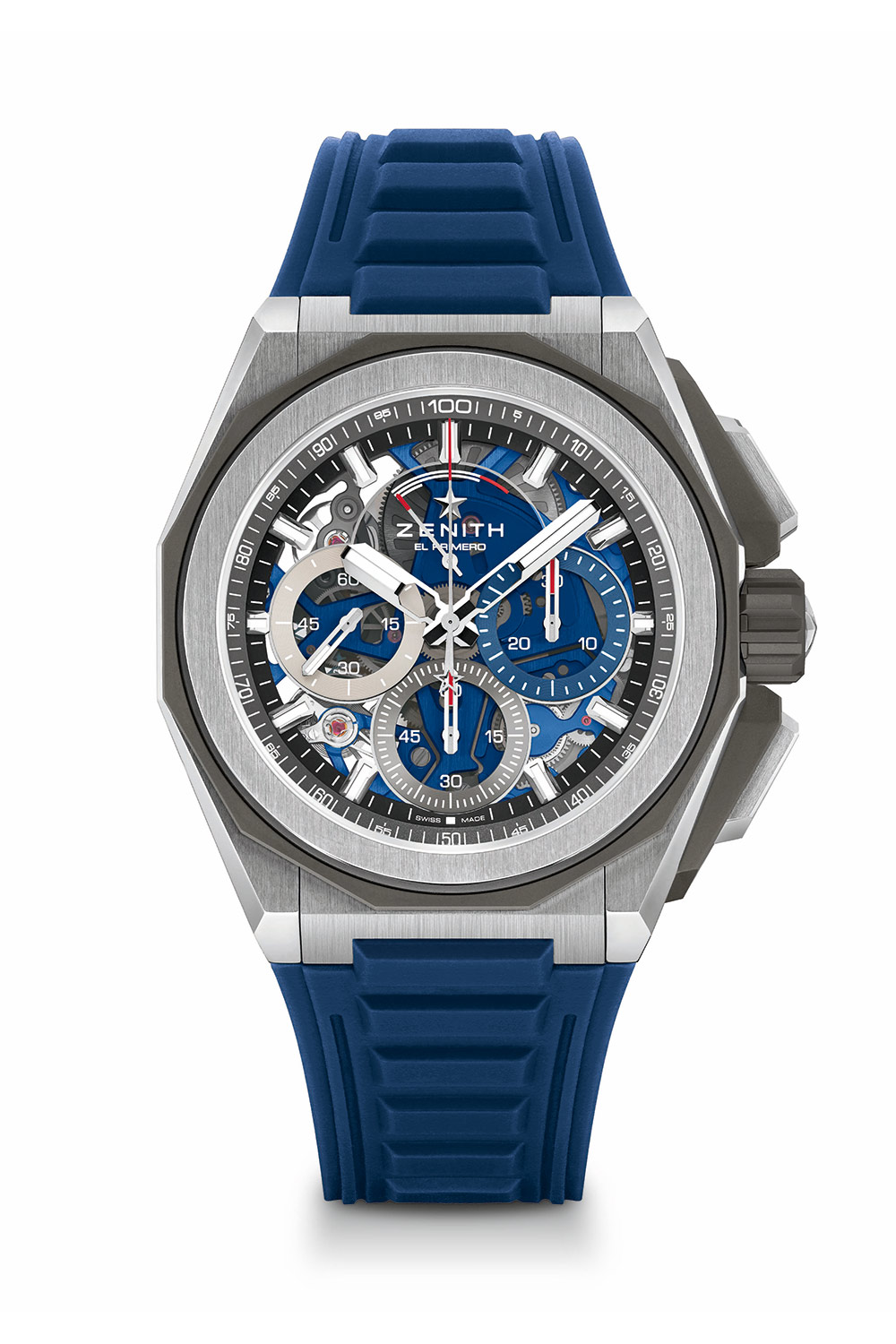 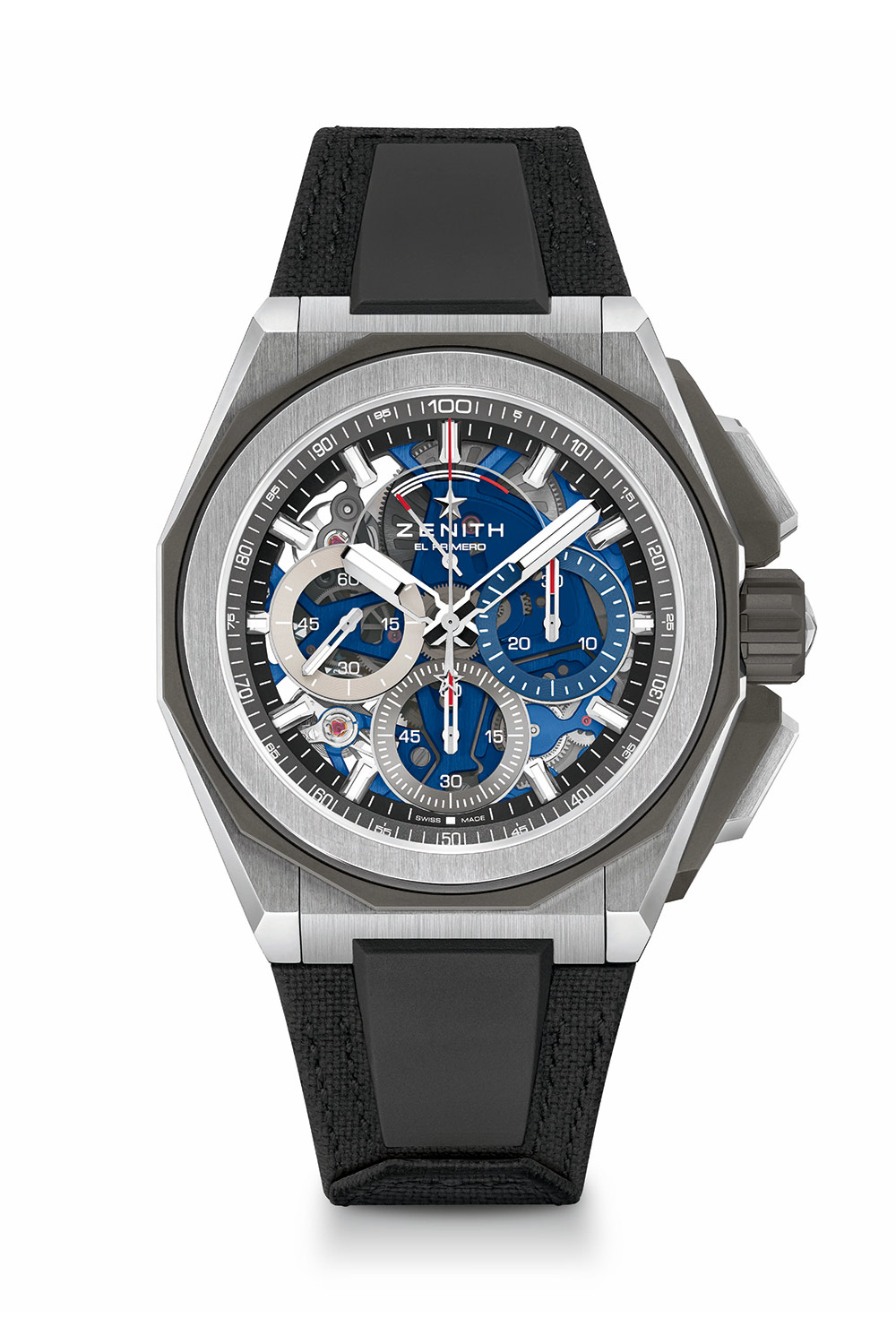 Each reference also carries their primary colouration through to the galvanised calibre that’s visible through the display caseback and the sapphire crystal dial – black for the matte version, blue for the blue one and gold for the rose gold. The fact that the dial itself is transparent means that those colours are the ones that define the face of the watch. 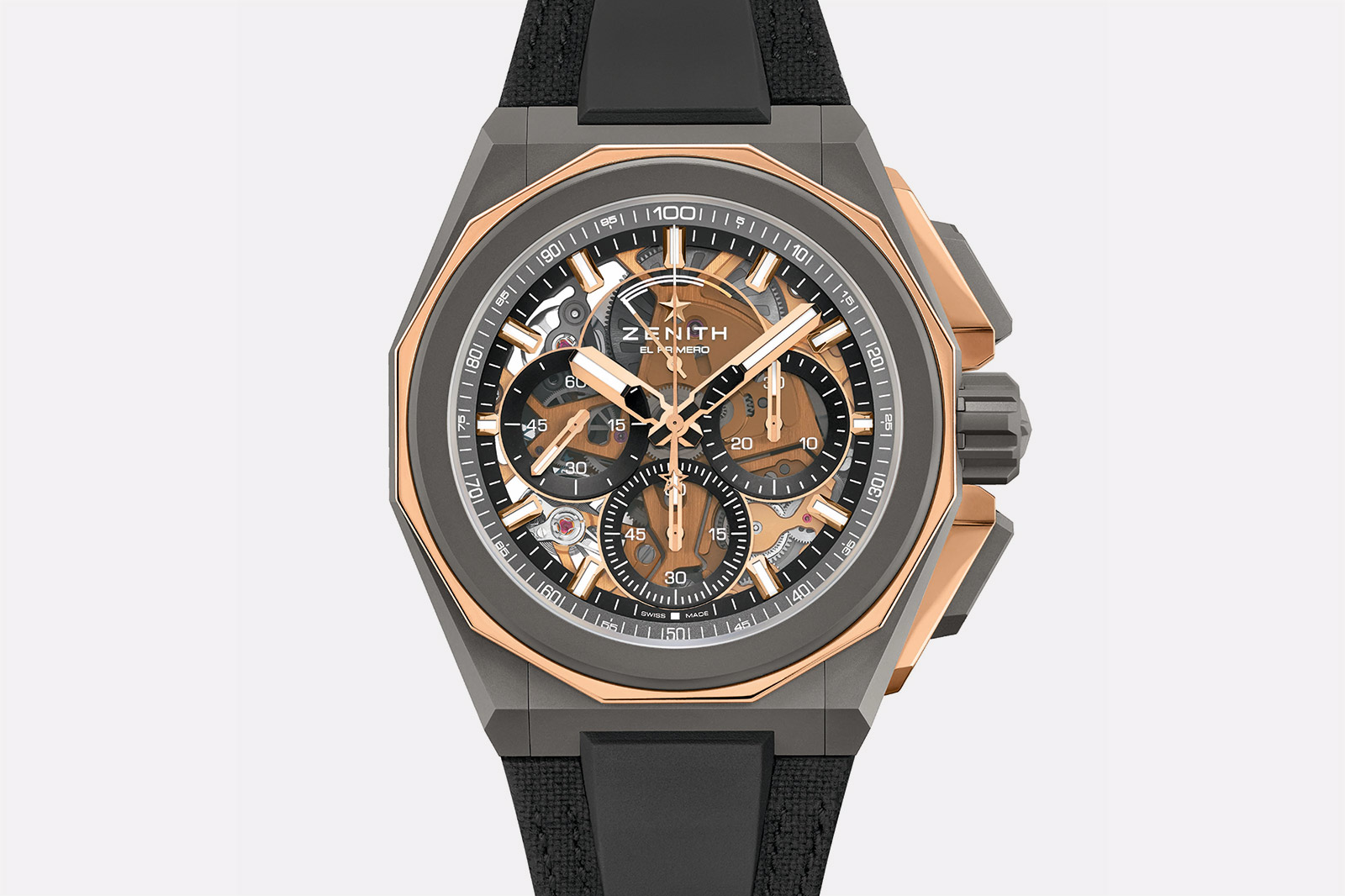 As to the layout and design of the dial, that’s another area Zenith has experimented with. The core concept was to make the hands, subdials and markings as legible and big as possible without compromising the view of the calibre through the crystal dial. As such, every feature on the dial is over-sized, from the thick hour and minute hands to the overlapping chronograph counters. Yet the apertures sculpted into all the hands give a skeletonised impression that lets you see through them to the calibre below. 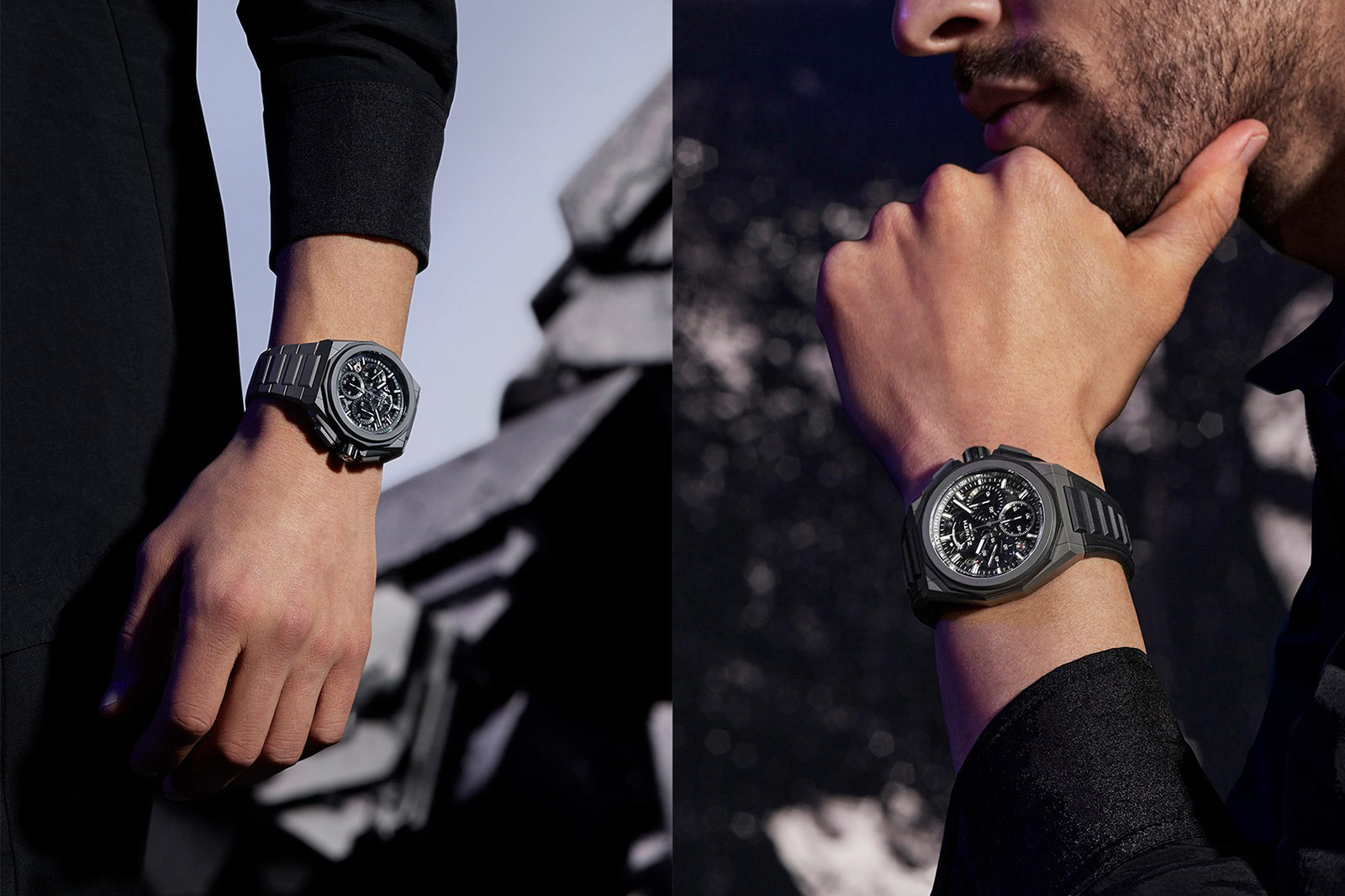 A lot of effort has gone into making the calibre stand out and for good reason, it’s the El Primero 9004 automatic chronograph. It’s a technological beast of a movement that gives its name to the DEFY El Primero 21. It has central hour and minutes, a small seconds at 9 o’clock, a central 1/100th of a second chronograph, a 30-minute counter at 3 o’clock, a 60-second counter at 6 o’clock and a power reserve indicator at 12 o’clock.

It manages all these high end functions by using Zenith’s double escapement system, where one 36,000 vph escapement controls the regular timing functions and a second 360,000 vph one controls the chronograph – a feature that is essential to keep the central 1/100th of a second chronograph hand rotating at a rate of once per second. It also has a power reserve of 50 hours meaning that you can use it daily without too much concern about it winding down. 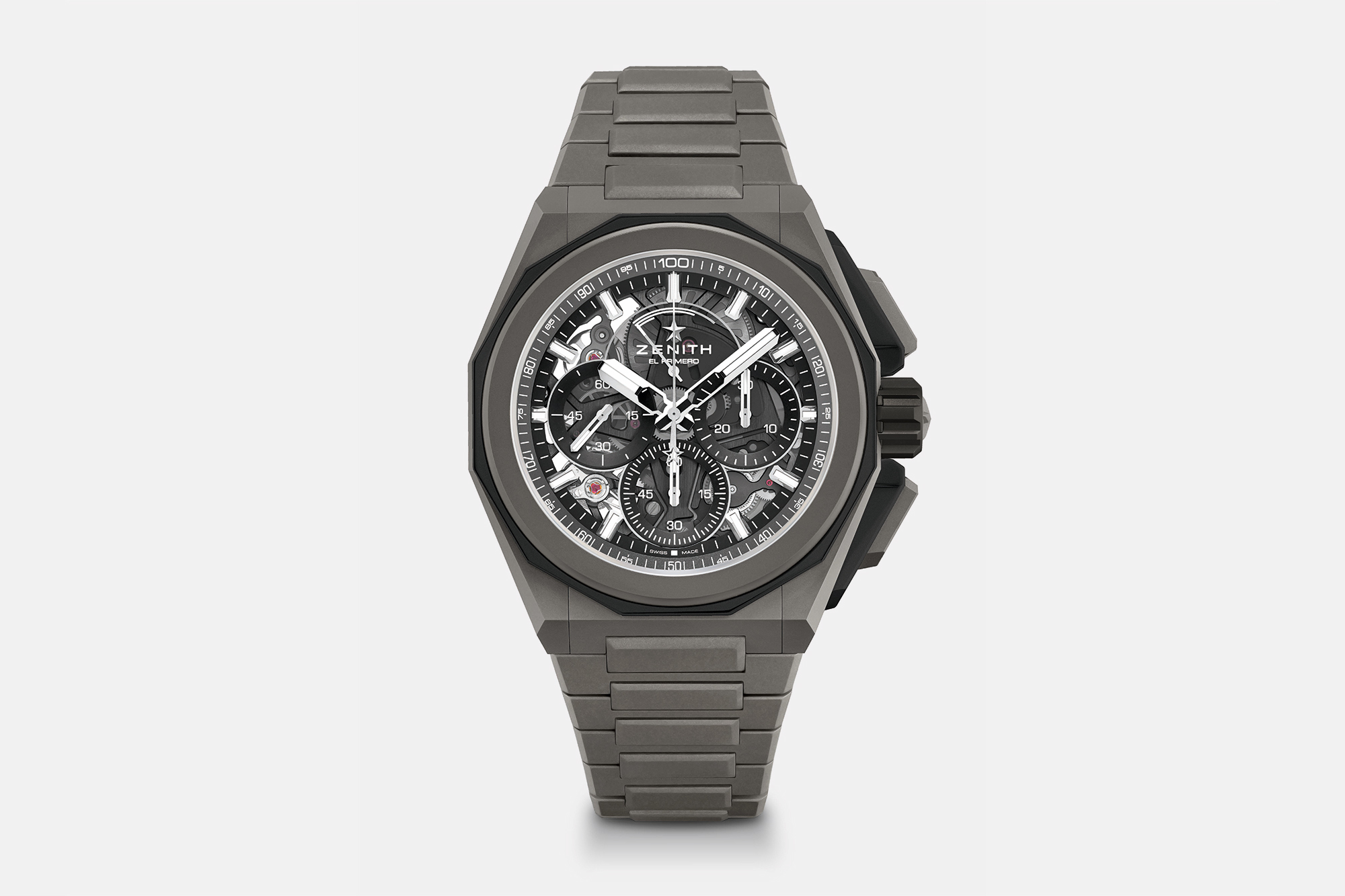 To cap it all off, there’s the straps. All three have a titanium bracelet with either a matte finish or satin polish, as well as a rubber strap in black or blue. Additionally, there is a new introduction to the DEFY range: Velcro. I understand the logic behind it, Velcro is quick to use and can survive in practically all situations even underwater. However, I’m still not a fan, I’ve had my arm hair get trapped too many times.

Ultimately, the Zenith DEFY Extreme takes everything good from the DEFY range and turns it up to 11, which is precisely what it was designed to do. It has a more intense aesthetic, with more angles and hard lines that make it look more durable. And the increased water resistance, titanium case and diverse strap options mean it actually does a good job of being rugged. There isn’t a lot to criticise – even the prices are reasonable at £15,300 for the two plain titanium references and £18,500 for the rose gold.