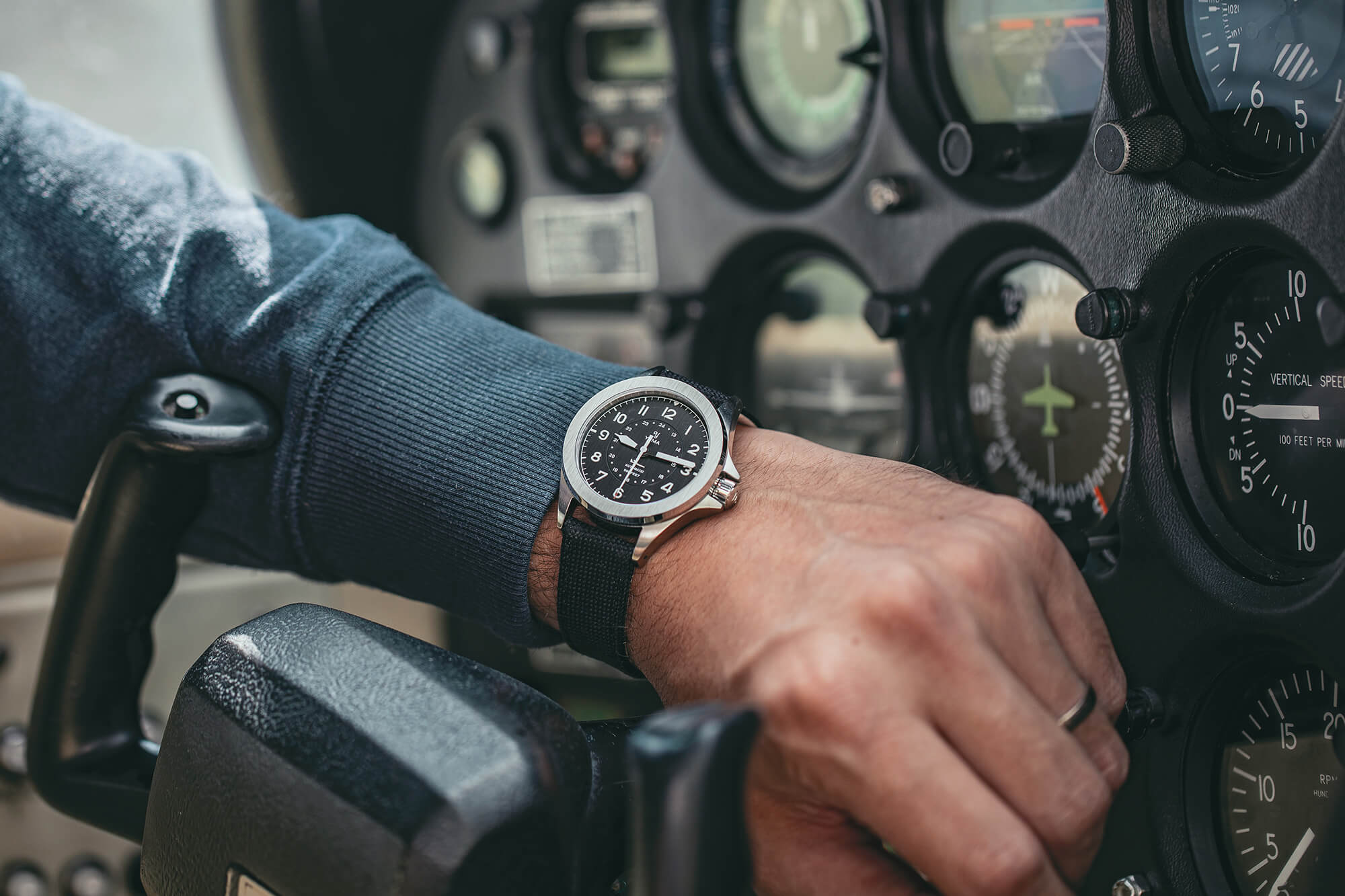 Yema and aviation go back a fair way; sure, they’re more closely associated with the diving world thanks to their iconic Superman, but as their partnership with the French Air Force shows, that hasn’t stopped their airborne ambitions. Now, finally, we have a serious pilots’ watch from the brand: the Flygraf Pilot.

In the hierarchy of Yema, the Flygraf occupies the space between the aforementioned Superman French Air Force and the stratospheric Spacegraf Zero-G. Yet there are two major differences that set it apart, ones that come with help from Red Bull Air Race pilot and Yema ambassador Sammy Mason. 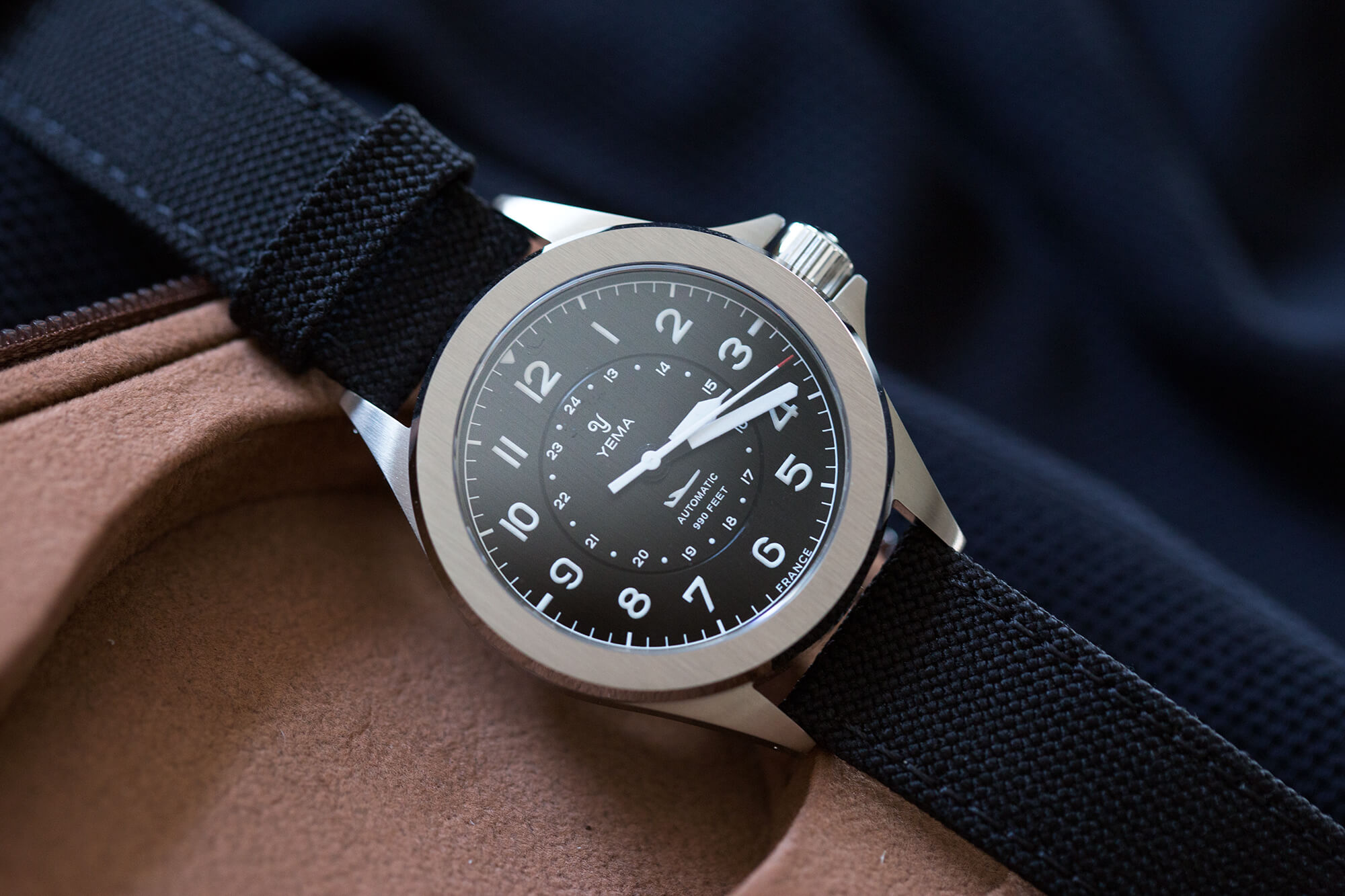 The first is the bezel. On the diver and Spacegraf, it’s a practical necessity, doubling as a diving tool on the former and a tachymeter for re-entry on the latter. The Flygraf however does away with that entirely, instead opting for a plain, brushed finish. Not only does it look distinct, lending a more industrial feel to the piece as it blends in with the case flawlessly, but streamlines the whole look.

That’s pretty important in a pilots watch; the time needs to be clear at a glance rather than have any superfluous info catch the eye. Too many indicators and numbers does not make for a great pilots’ watch. Which brings me to the second major difference, the dial. 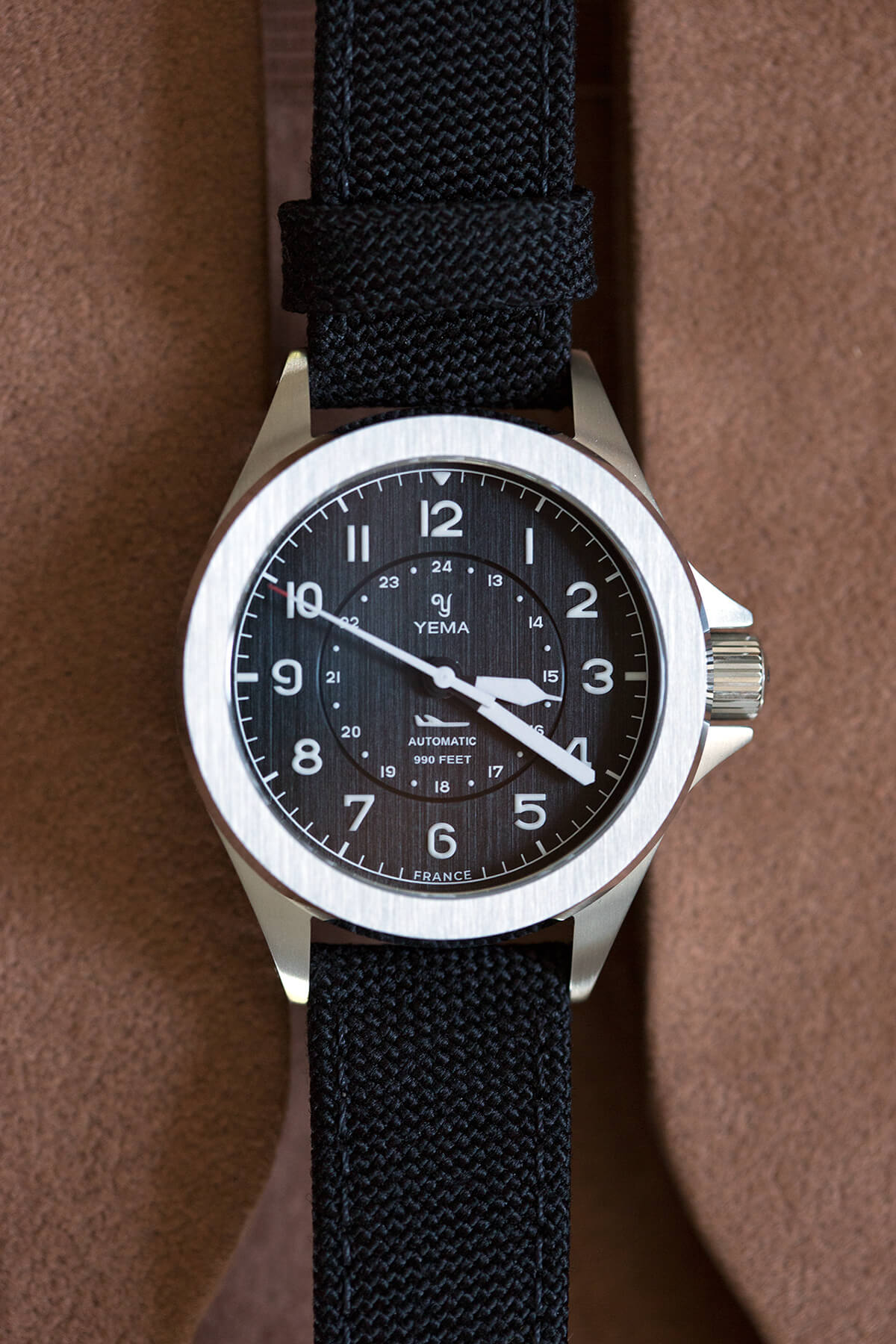 This is the only Yema in the current collection to use numerals. All the others use hour markers instead which convey a more technical, professional aspect to the watch. Here, the necessity of cockpit reading means anything other than clear, succinct, Arabic numerals would have been impossible. Or at least not a great design choice. 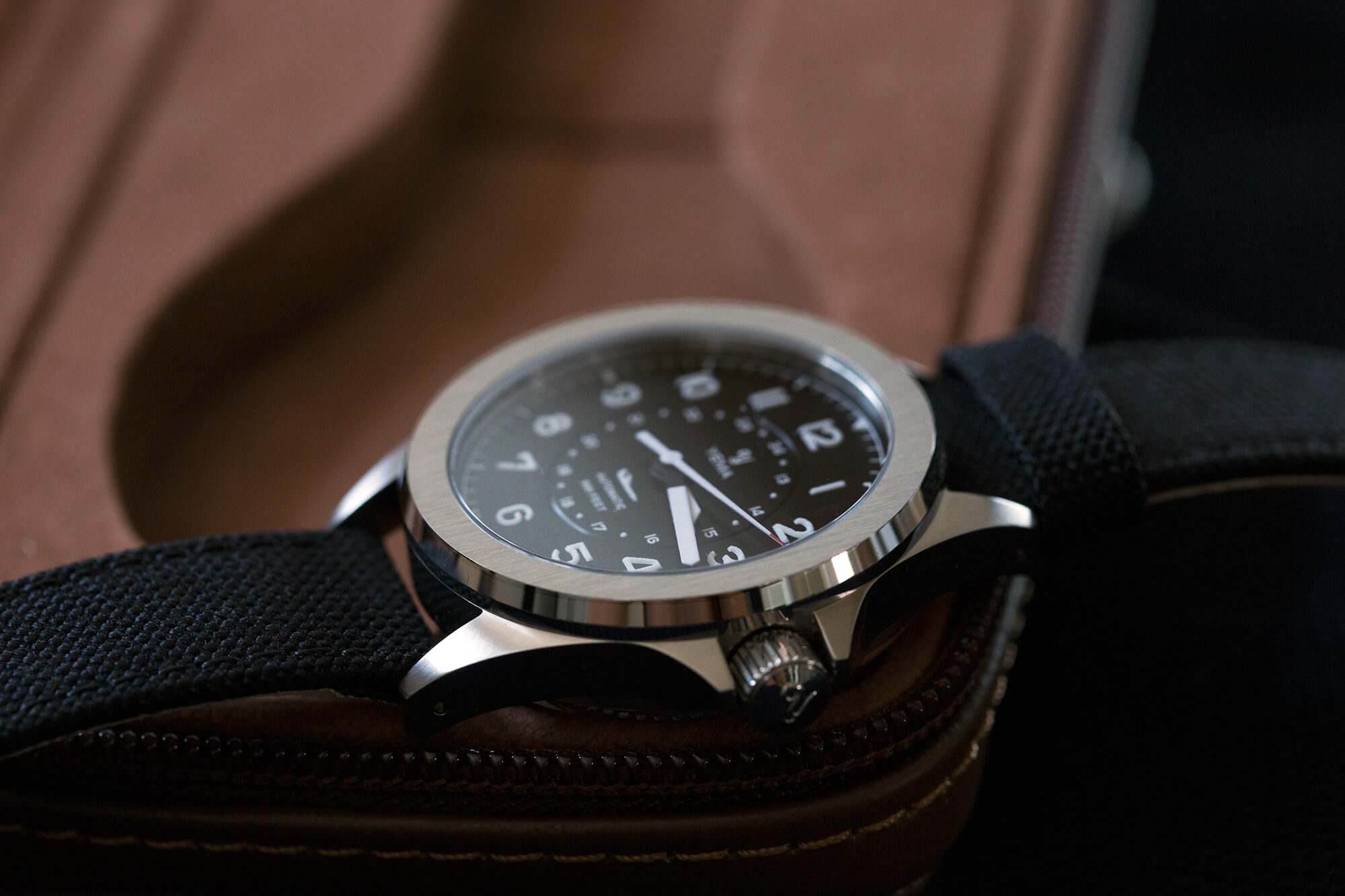 The lumed numbers are three dimensional and make for a nice contrast against the brushed, segmented dial which itself works phenomenally well – in a low-key kind of way – with the texture of that plain bezel. Then there’s lettering underneath the collection’s airplane logo. 990 feet in case you don’t fancy converting in your head, is about 300m, the depth resistance rating of the Flygraf. As feet are more common in flying than metres, it’s a great little touch.

Despite being ostensibly a pilots watch, there’s something sports luxe about the Flygraf too; its strong silhouette and brushed, flat bezel are a subtly Genta-esque, something that would suit the south of France in, say, an extended stay in Parc du Cap, as much as a cockpit. 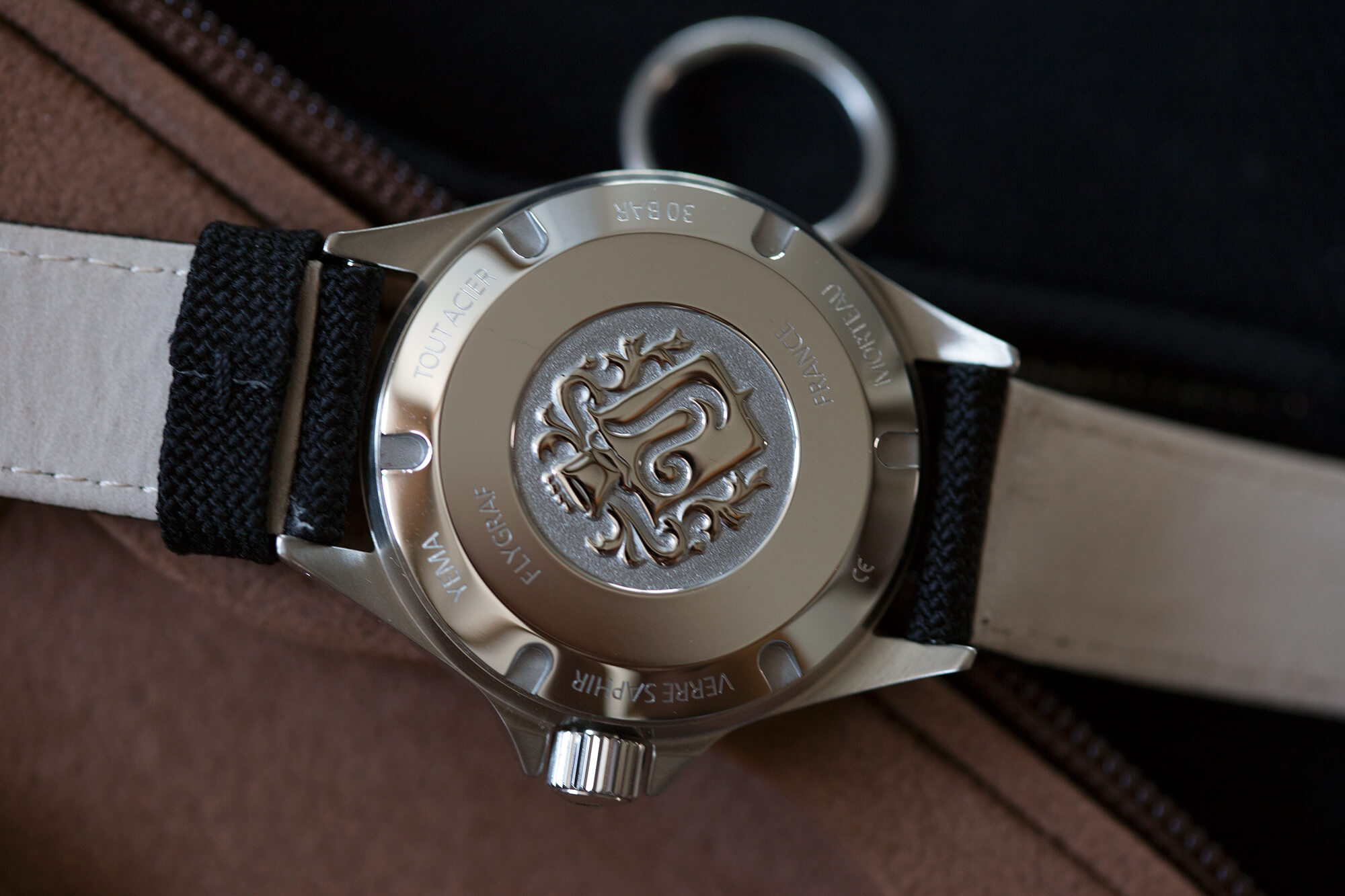 Equipped with a solid in-house movement and finished on an incredibly comfortable hybrid leather and fabric strap, the Flygraf might be a lot different from Yema’s other releases. It’s also quite possibly my favourite of their collection – and I already adore the Superman. For US$ 690 (just under £560) there aren’t many watches I’d rather buy.