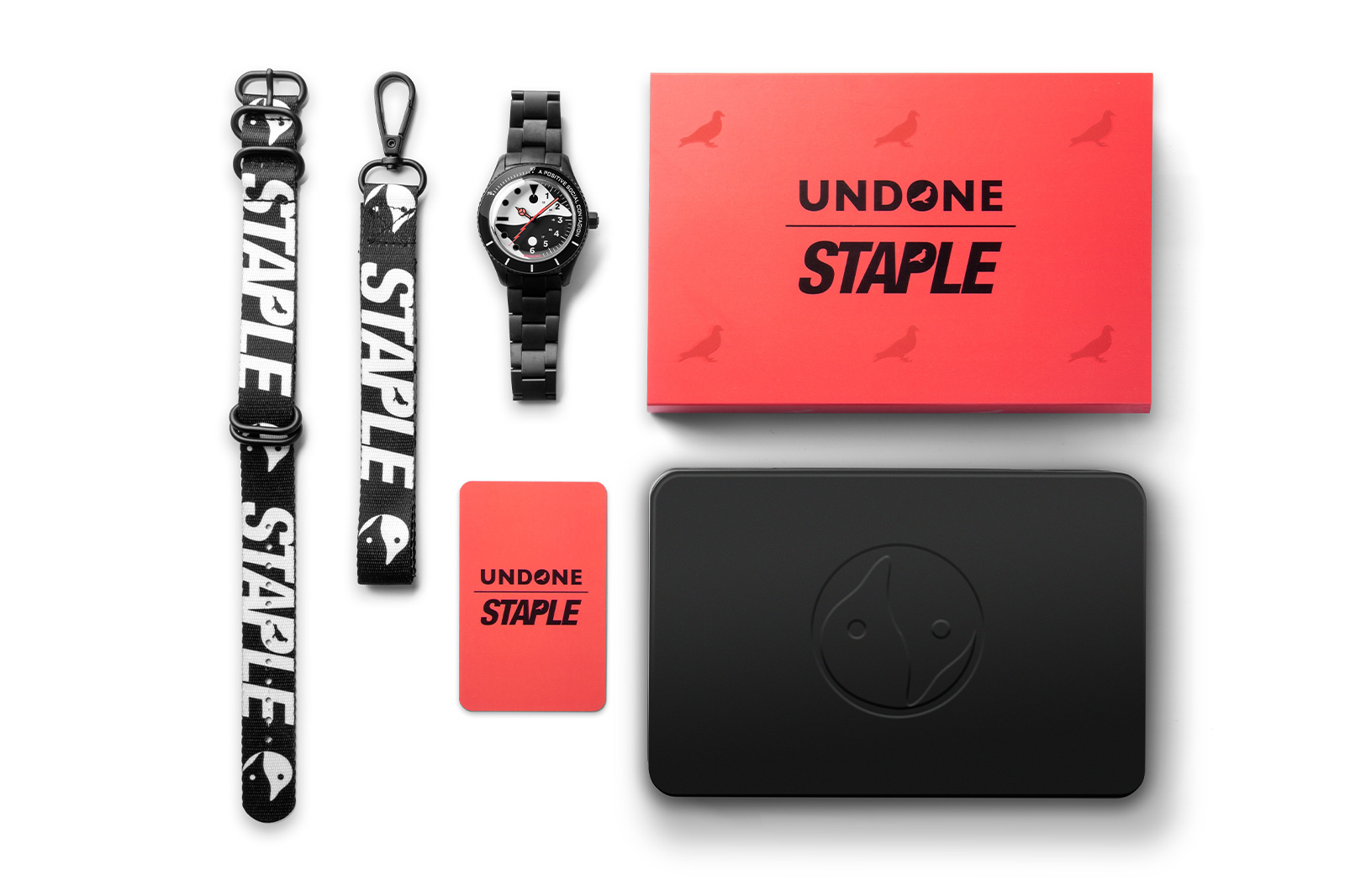 UNDONE are known for creating timepieces that have self-expression at the heart of them. Recently they’ve released a wide array of quirky collaborations that evoke such diverse elements as oriental high art with the Urushi collection and western pop culture in the Popeye collection. Their latest collab turns its attention to the arena of urban streetwear, marked by a partnership with designer jeffstaple’s brand, Staple Pigeon. This is the UNDONE x Staple collection.

At first glance, the UNDONE x Staple watch is quite a daunting timepiece. The design is loud, chaotic and lacks any sense of refinement or obvious pattern – lines and shapes seemingly used at random within a largely black and white colour scheme. However, like any good piece of street art or graffiti the longer you look at it, the more you begin to make sense of it. 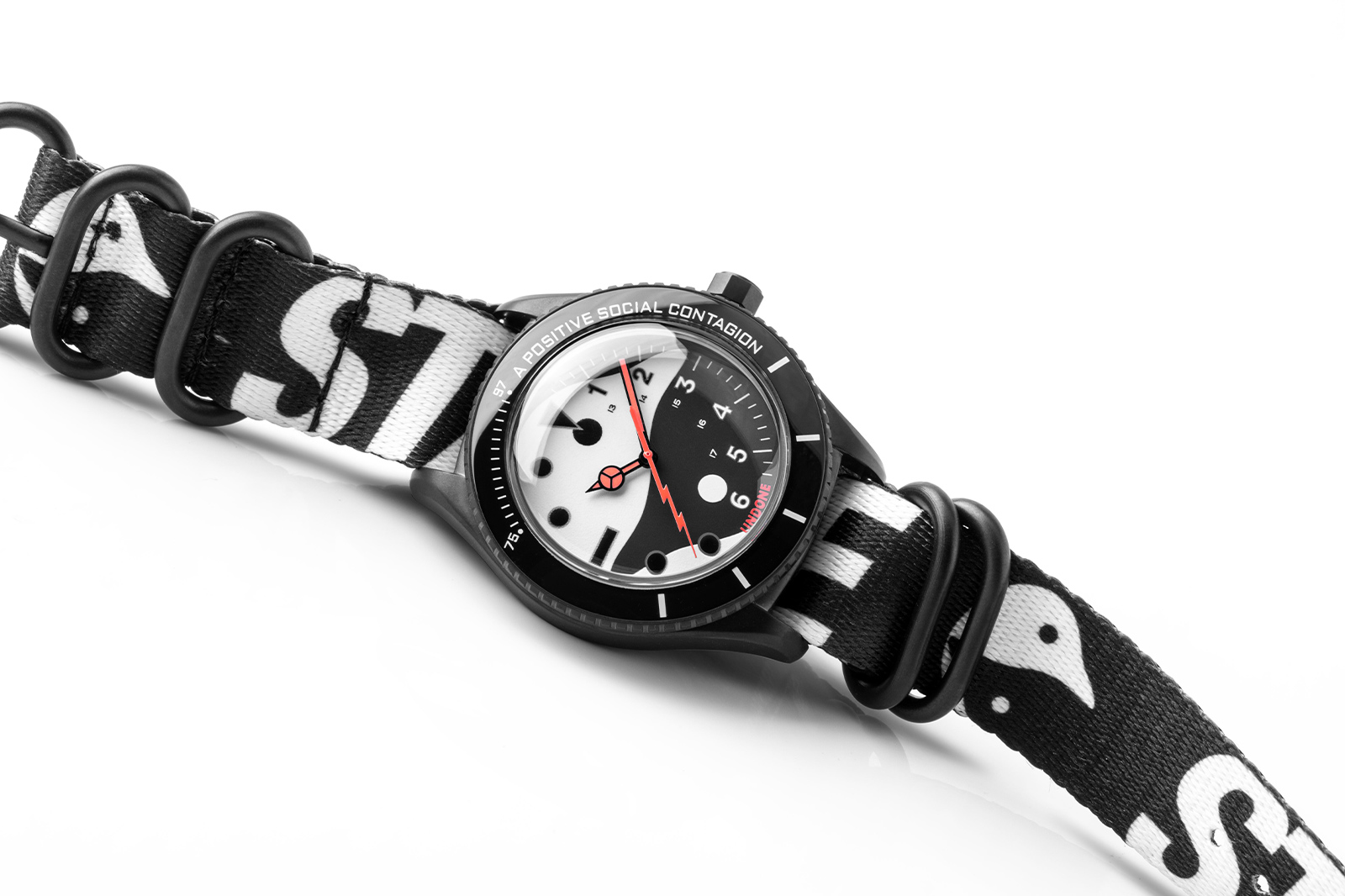 The overarching image is that of a stylised yin yang symbol, with each of the traditional tear drop shapes replaced by the head of a pigeon (a play on the Staple Pigeon logo and name) the reverse colour dots becoming the birds’ eyes. You then notice that the yin yang symbolism is replicated by the hour markers, which form an off-kilter California dial that is not split horizontally, as usual, but along the axis of the symbol. 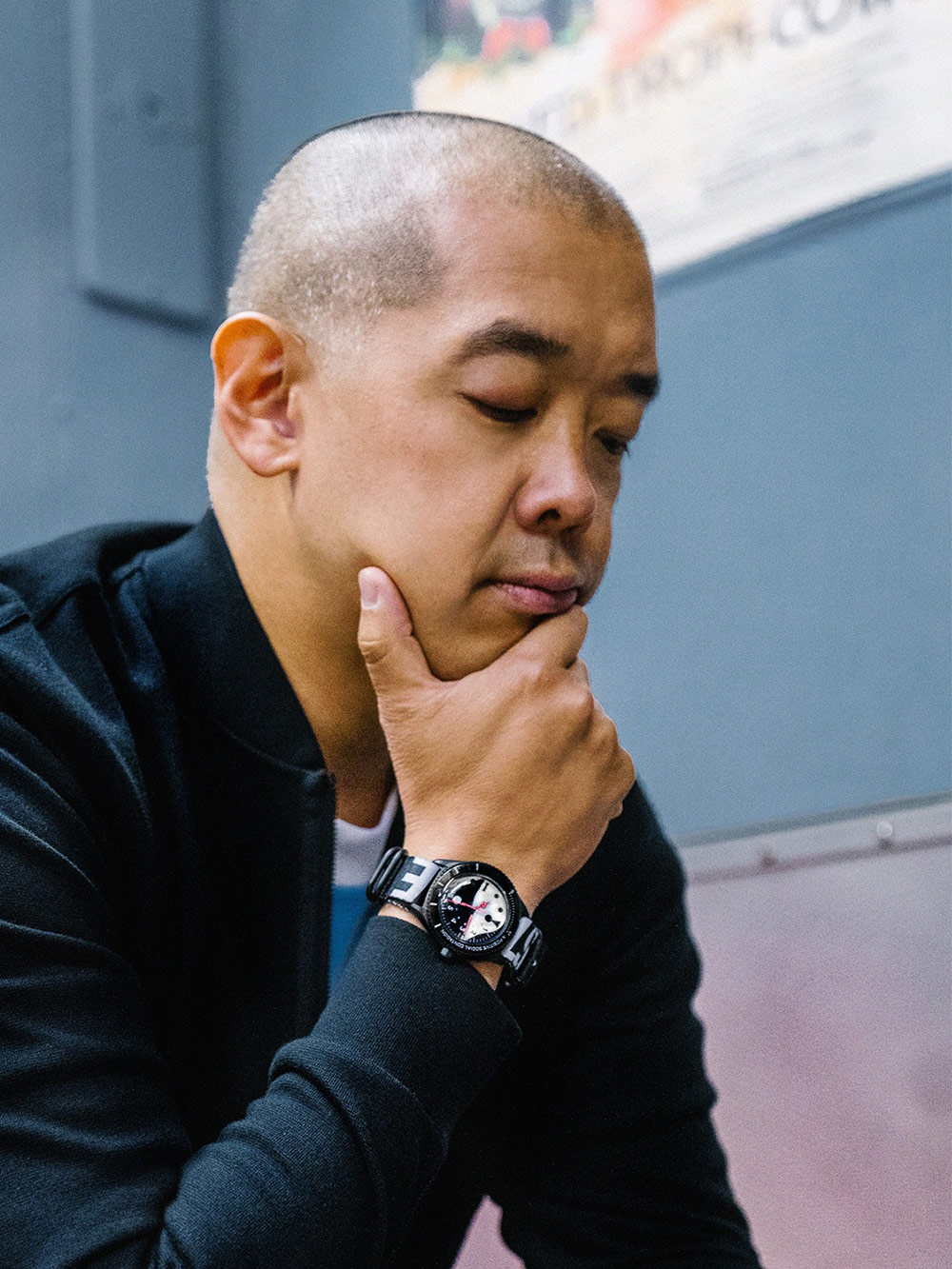 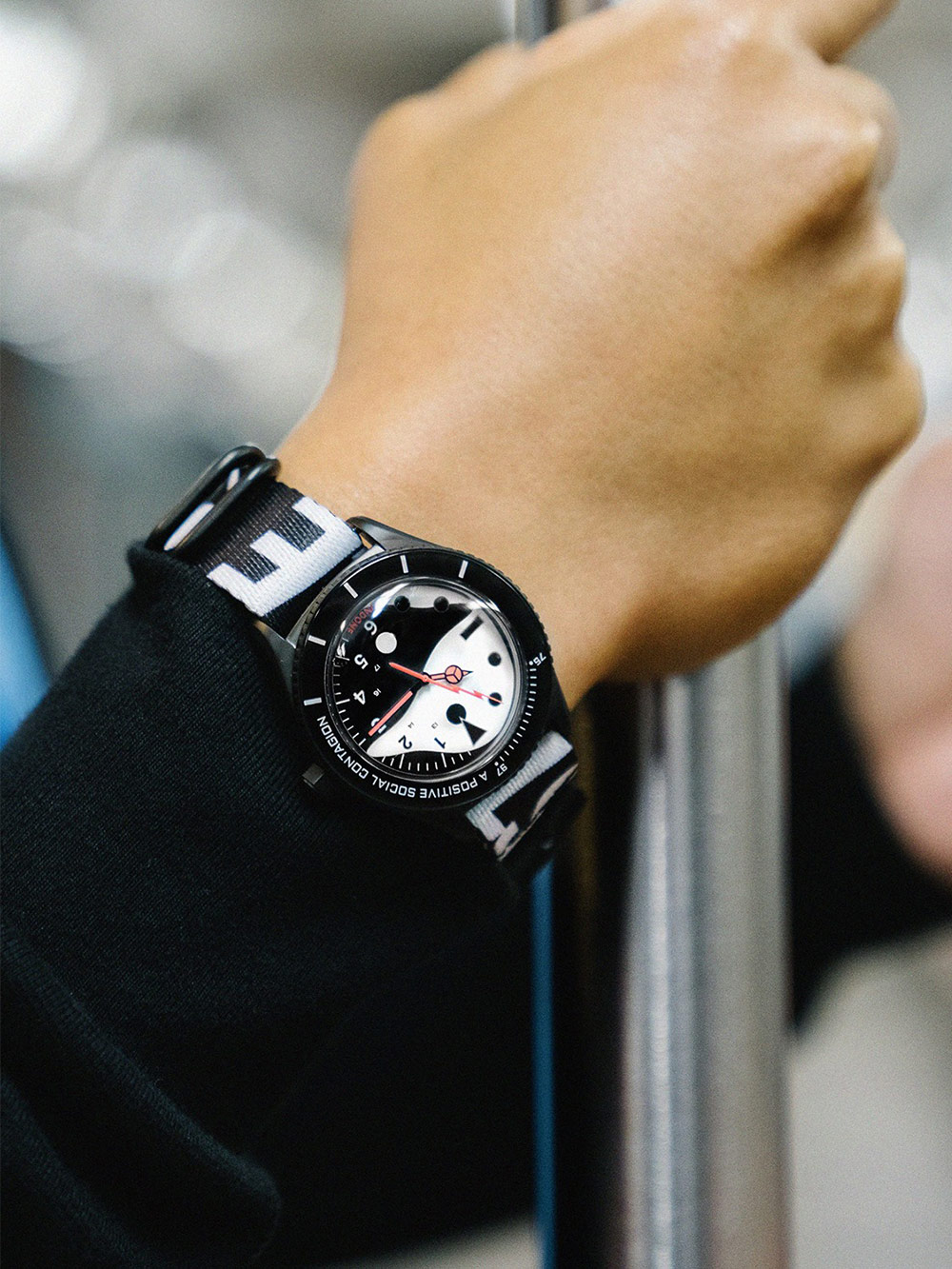 Conceptually, yin yang – the light and the dark combined – has its origins in China, which is where jeffstaple, the founder of Staple Pigeon, traces his heritage. In fact, the bezel of this watch is entirely dedicated to Jeff’s life, especially the 75 and 97 markings which allude to 1975 and 1997, the year he was born and the year he founded Staple Pigeon. The bezel inscription ‘A Positive Social Contagion’ has been the brand’s tagline since its inception although it has recently found more poignancy for obvious reasons.

The watch’s design is completed by ‘pigeon pink’ hands and bi-colour lume: green on the hands and blue on the hour markers and white areas of the dial. On the reverse side, you can find a matching pink tone display caseback, through which you can see the automatic movement inside. It’s the Japanese TMI NH35A calibre from Seiko, which with a 42-hour power reserve is hard to knock even though it’s not Swiss. 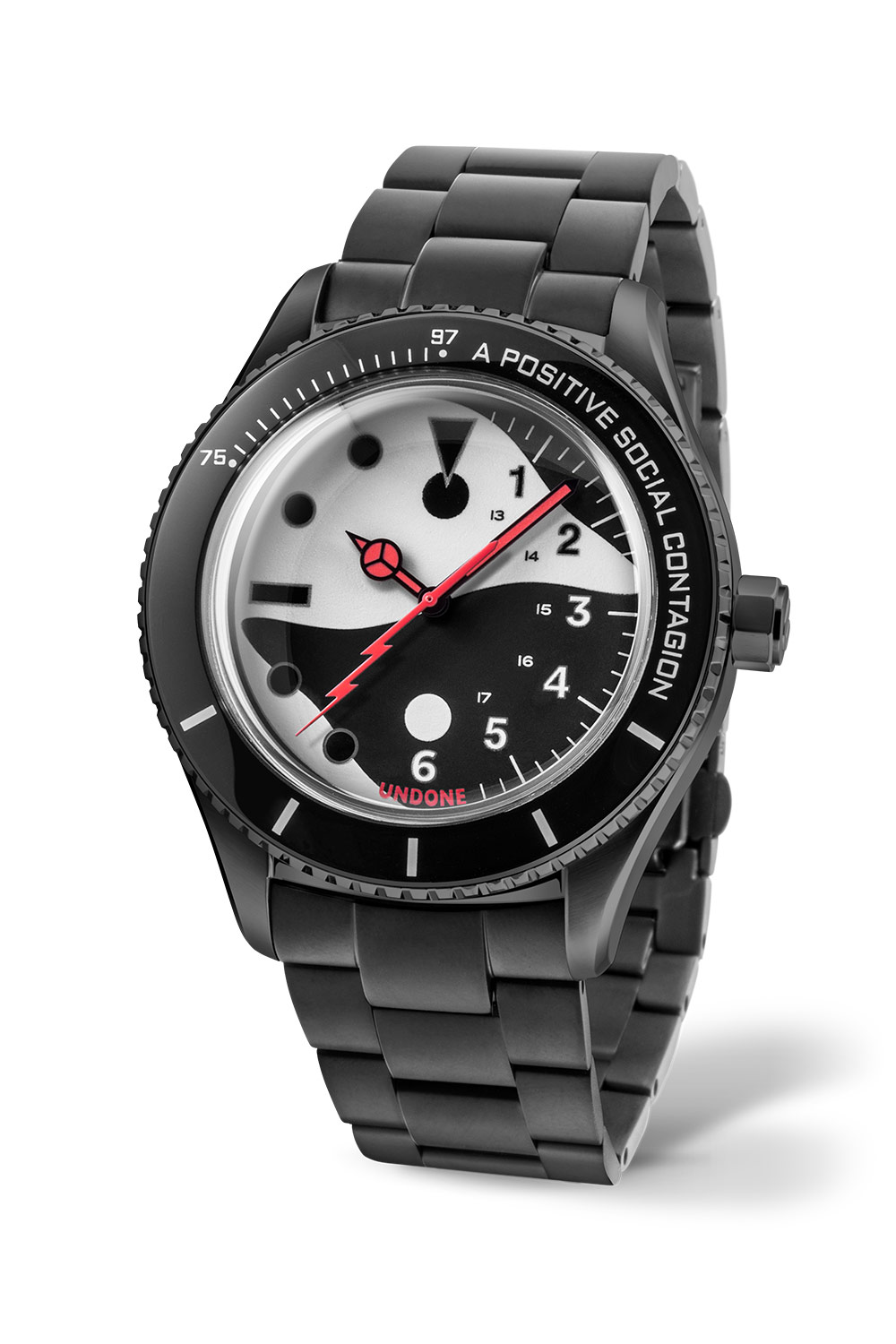 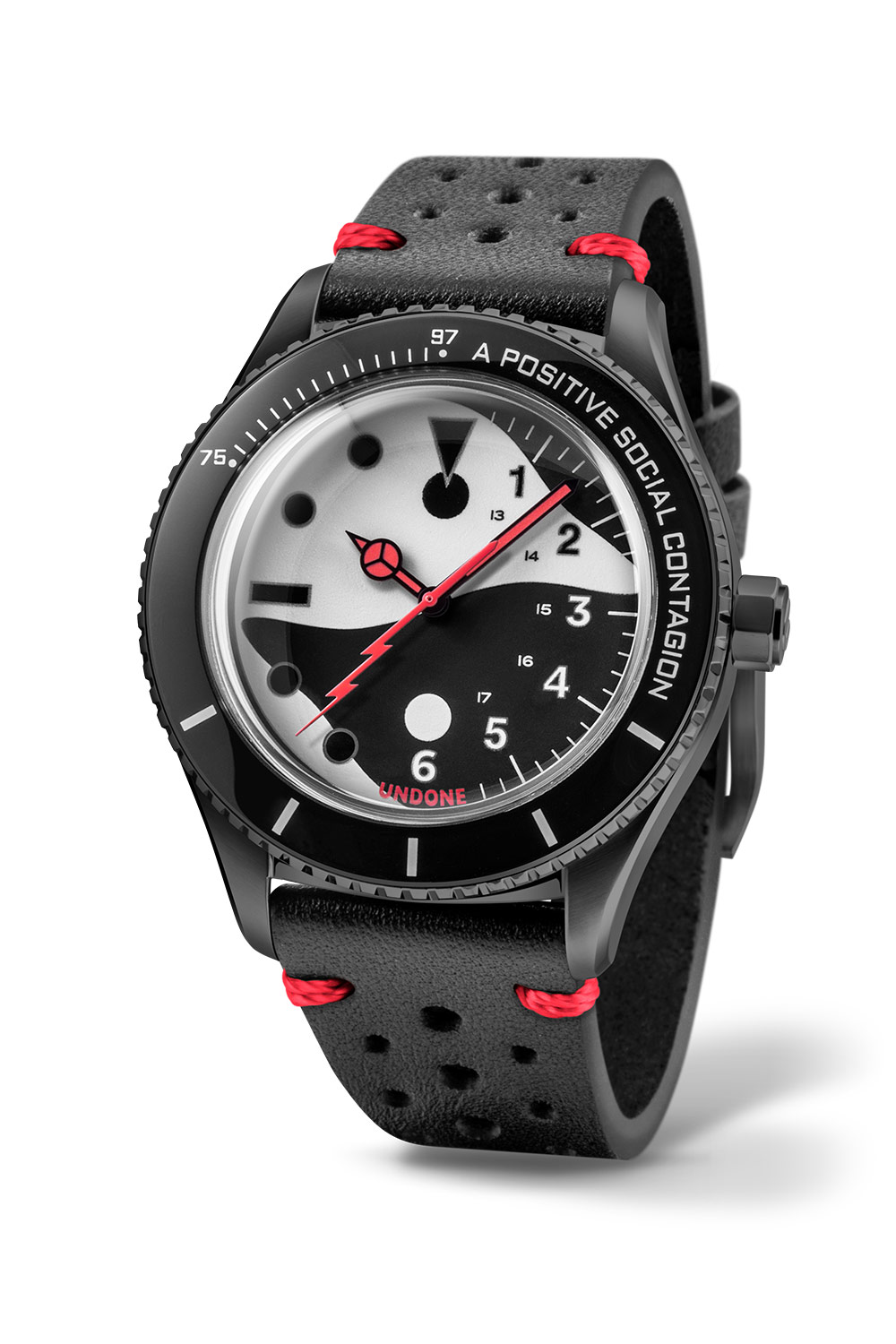 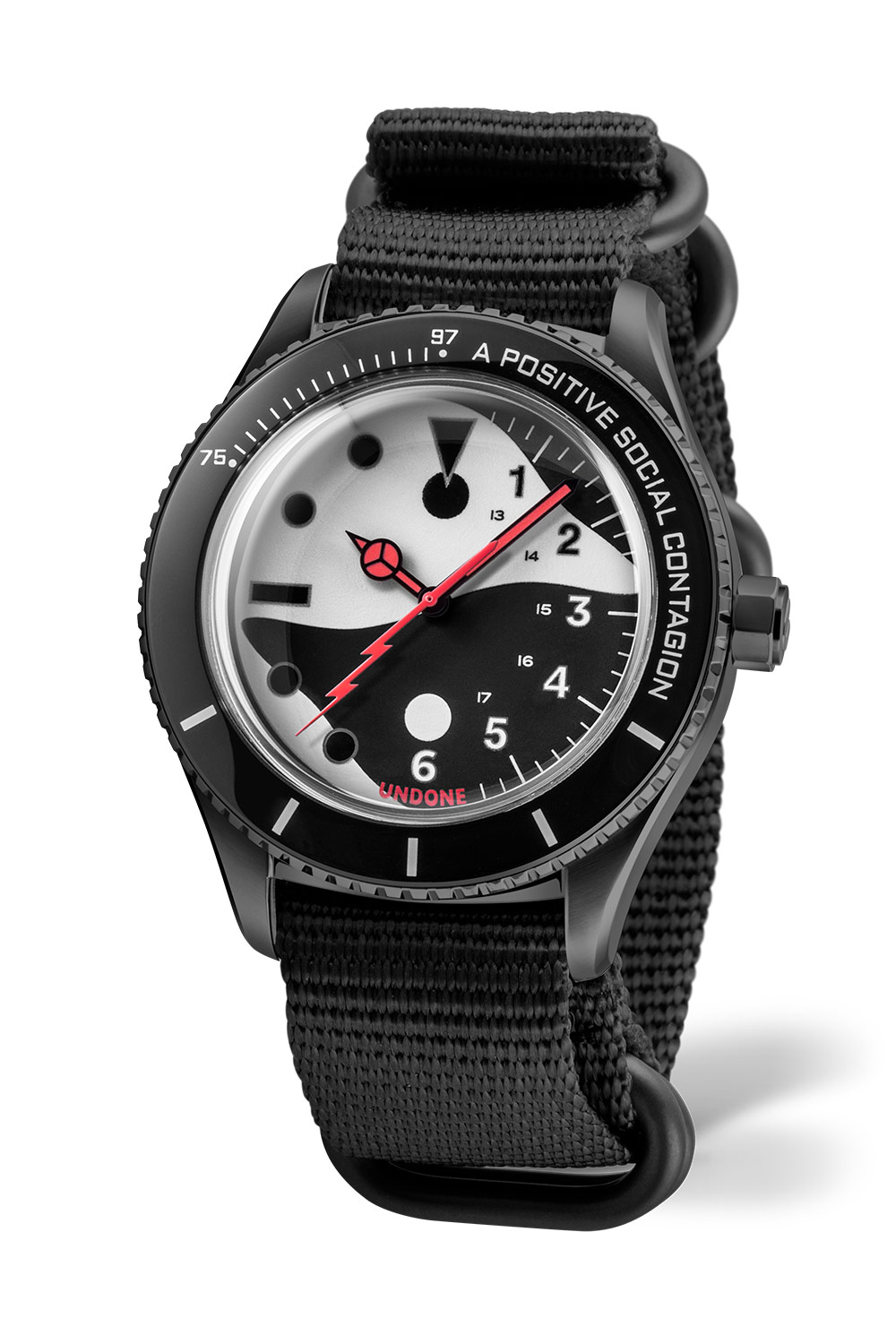 As for the case itself, it’s a good size at 40mm in diameter and comes with a choice of three bracelet and strap options: an elevated black steel bracelet, a Staple Pigeon-branded nato strap or a classic black leather rally strap. The nato strap also comes with a carabiner key chain and it’s worth noting that if you order the bracelet version you also receive the nato strap and key chain alongside it. 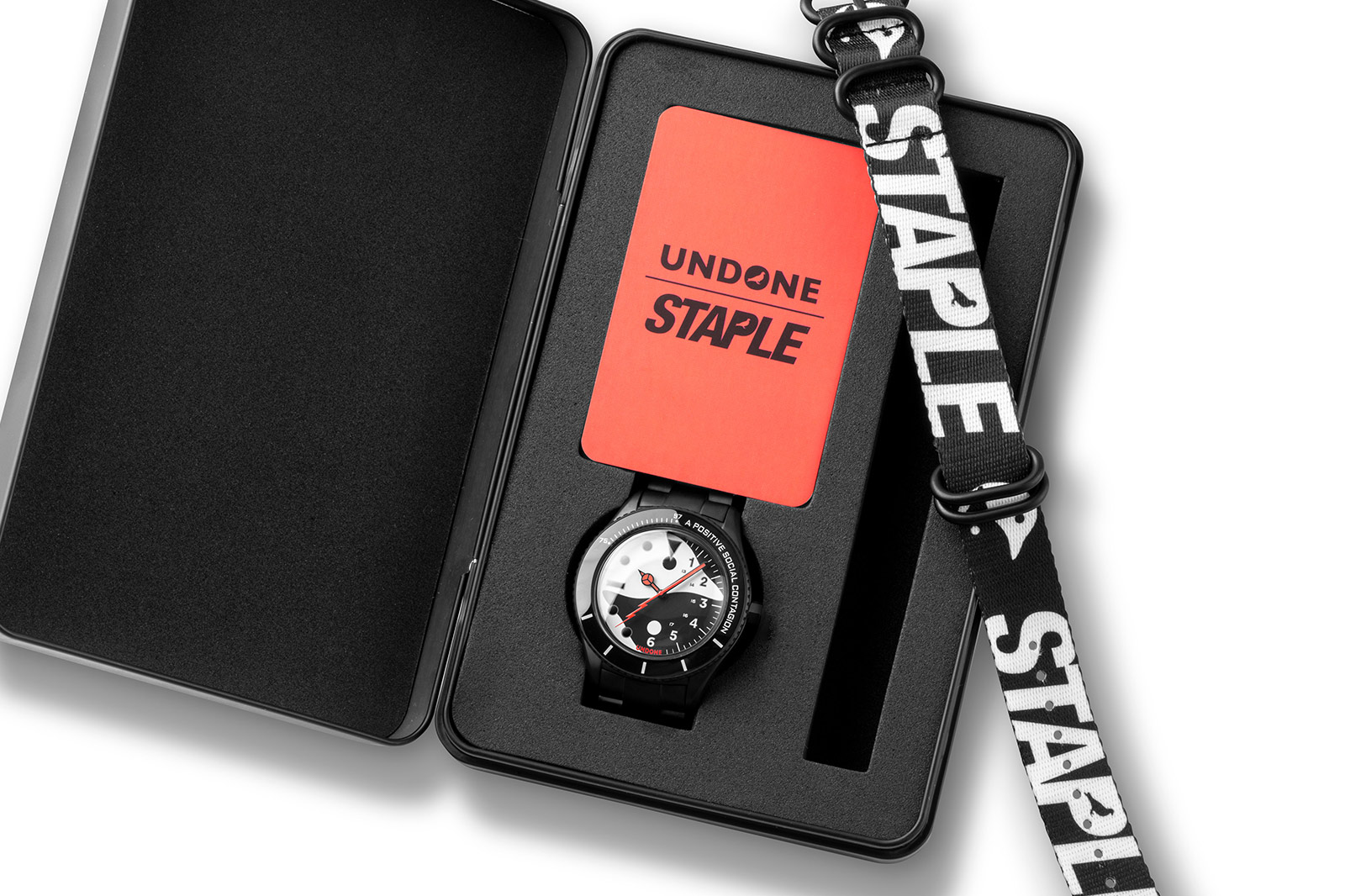 And like all UNDONE watches, it’s highly accessible – despite including a limited edition of only 300 pieces. The limited version is £552 for the bracelet and collector’s set while the two non-limited versions are £441 on the plain nato and leather straps. You can also purchase the branded nato strap separately for £64 on its own or at a discount alongside the non-limited UNDONE x Staple watches.