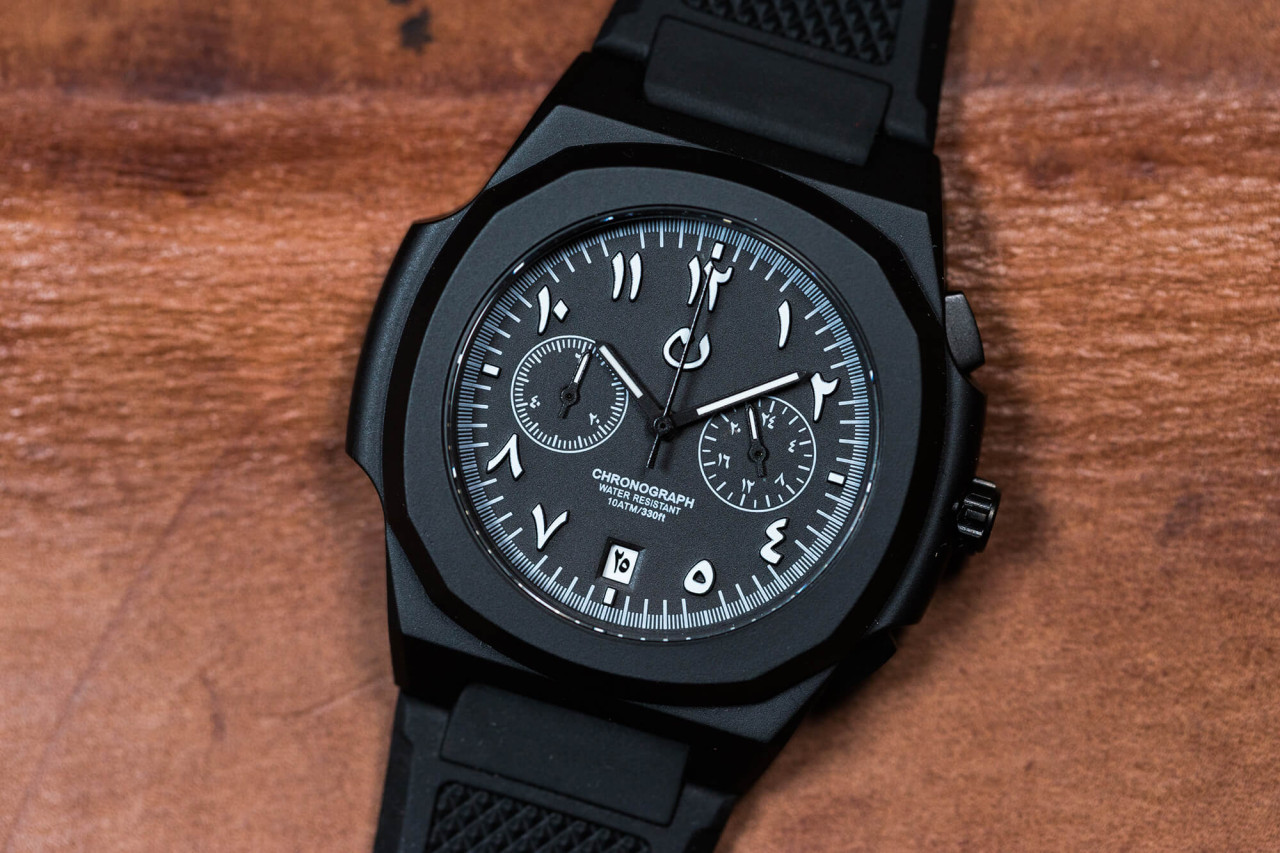 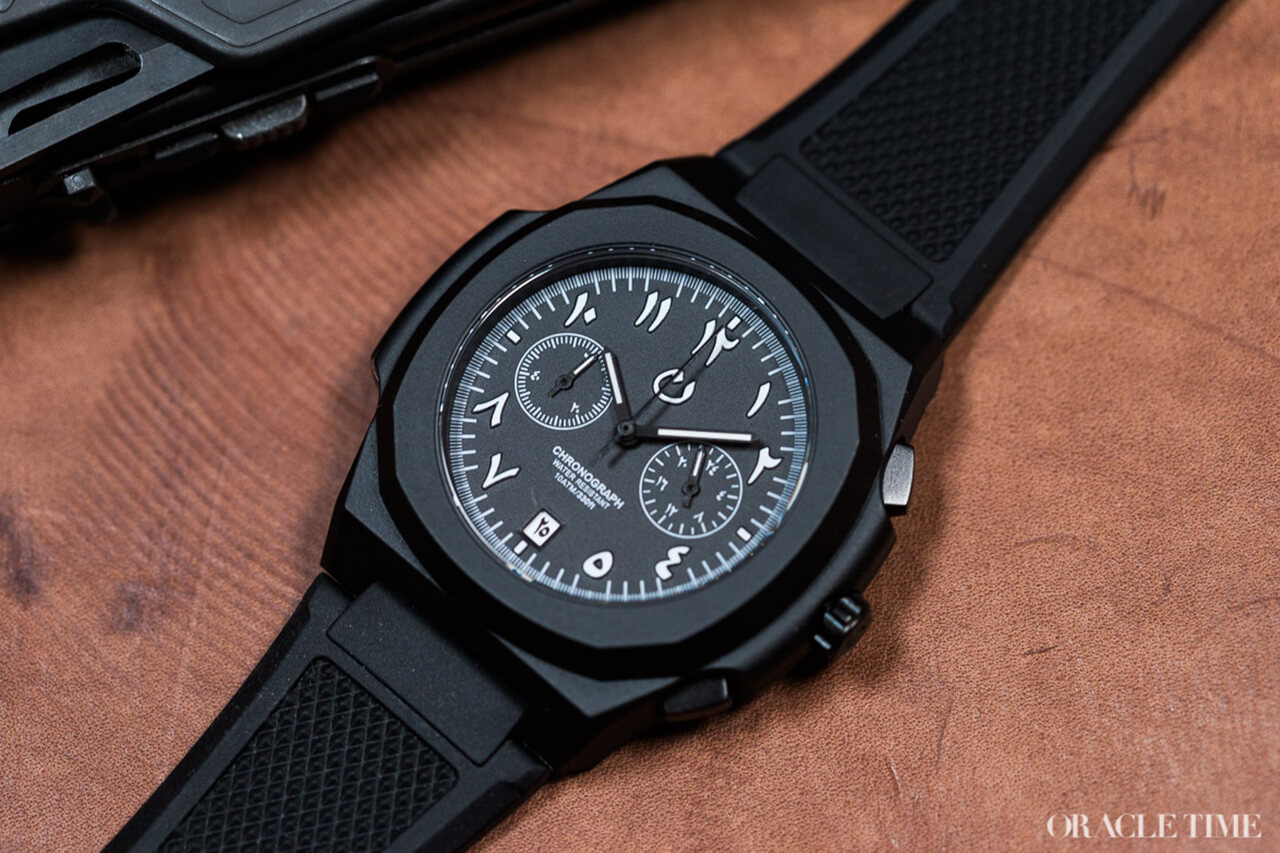 Nuun is a brand with adventure at its core. First established in the Arabian Gulf, inspired by the island of Nuun, their range of watches are designed to look good at the beach, in the mountains or the boardroom with equal ease, while being rugged enough to keep up with you. Their latest watch moves away from their gulf heritage to colder climes further north with the Nuun Official Arctic Chronograph.

At a glance, the muscular shoulders to the Arctic’s 40.5mm case wear its iconic inspiration on its sleeve. If you know anything about watches, you’ll recognise that silhouette. Yet Nuun have added their own twist to the overall design in more ways than one. 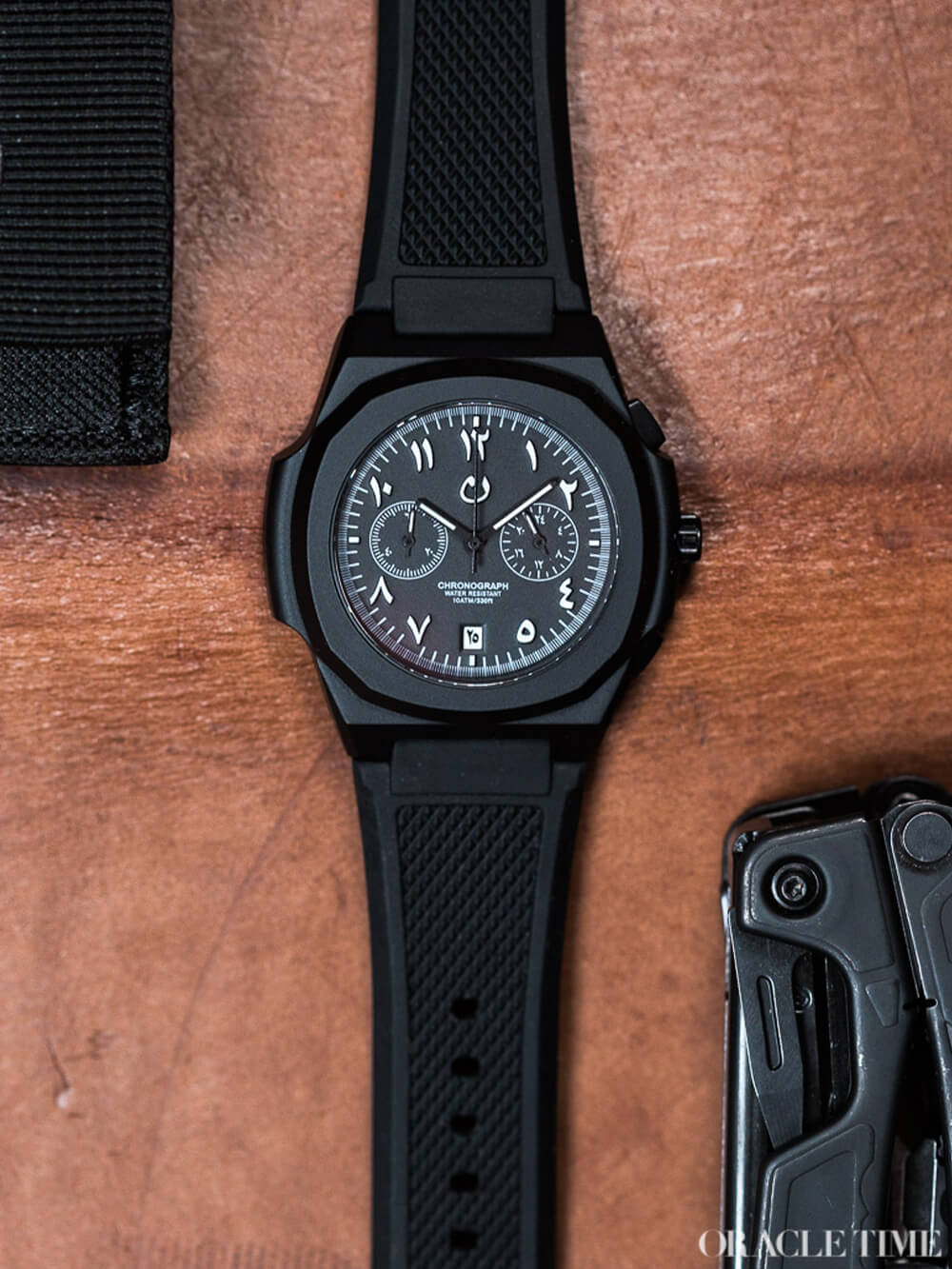 Firstly, the entire case is made from matte polycarbon, a hardwearing, lightweight material perfectly suited to a sports watch. Both the size and the case material make the Arctic extremely comfortable, particularly on the pair of rubber straps it comes equipped with. The shoulders aren’t too imposing and on even a slimmer wrist it looks seriously good.

And yes, that was a pair of rubber straps. While we’d normally expect a leather and a rubber, the difference here is simply in the fastener. On the one hand you have a simple pin buckle; on the other, a cool, comfy Velcro number. Both are, of course, in black. 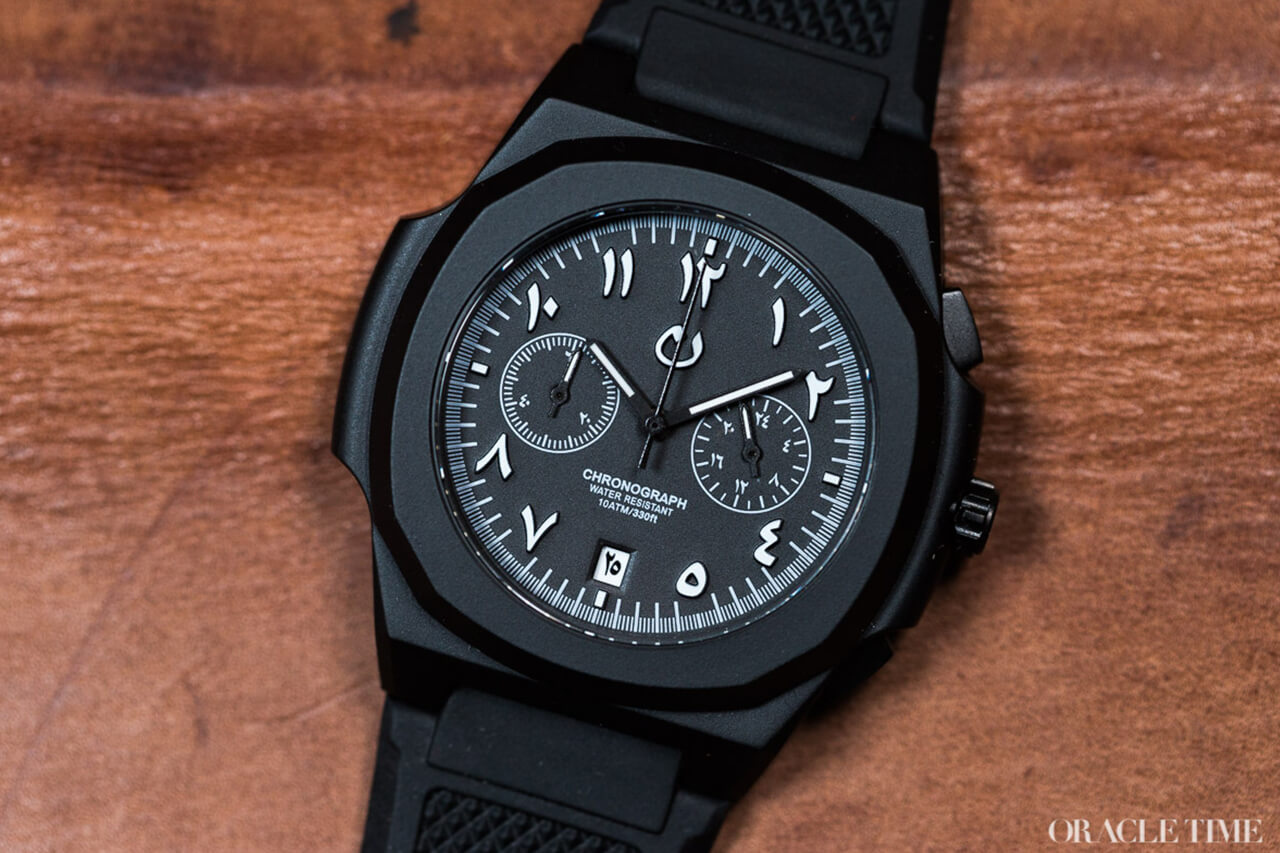 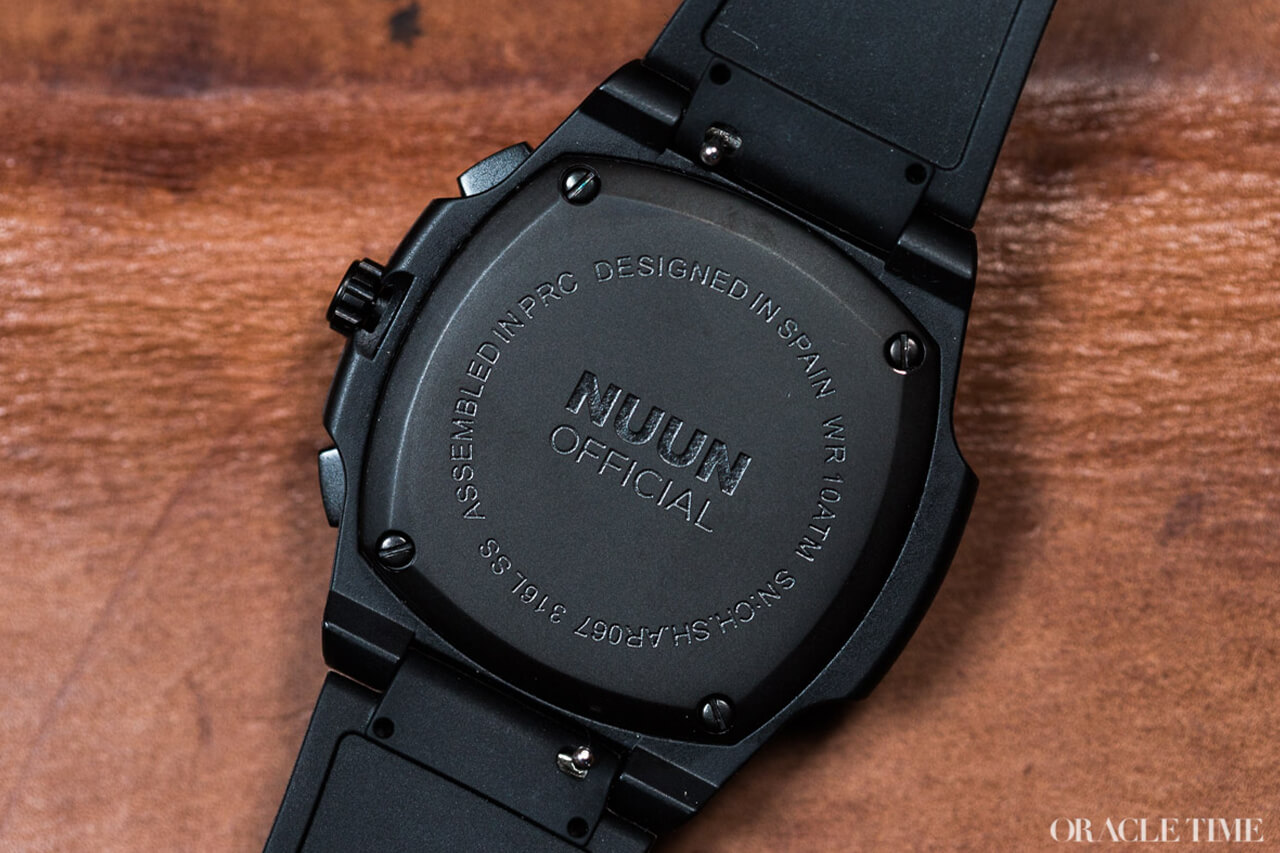 The next big twist comes on the dial. Showcasing the brand’s Bahraini roots, the numerals are written in Arabic script rather than westernised Arabic numerals, both across the main dial and the chronograph counters. Rendered in bright white, they stand out from the all-black look for supreme legibility in the same way as classic pilots and diving watches.

There is another version of the Arctic though, one that strips out all colour entirely. The Sol Noctis (Midnight Sun) uses black indexes against a black dial which, let’s be honest, isn’t the most practical look in the world. Cool, sure, but not practical. For our money, the high-contrast version makes far more sense. 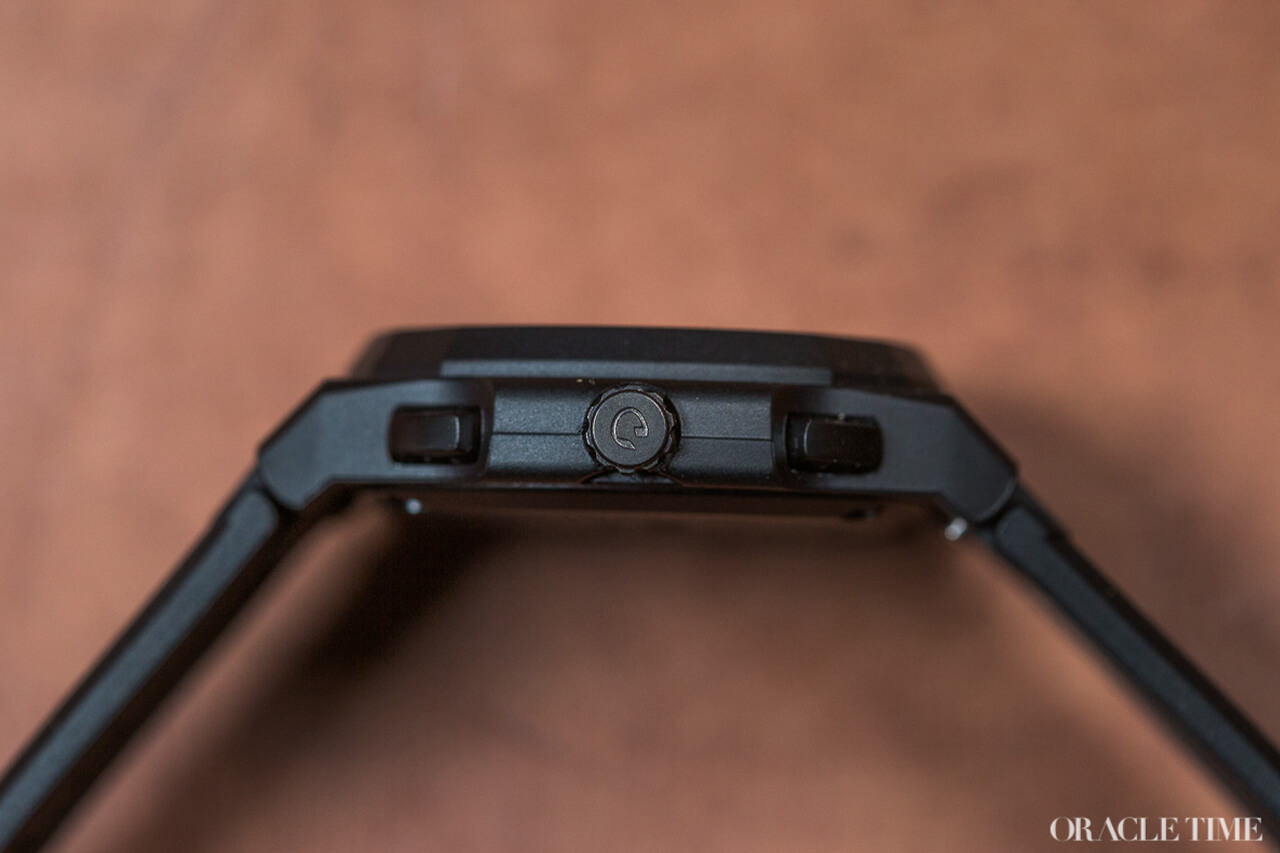 Both pieces are equipped with a Miyota 0S21 calibre movement, a reliable, accessible quartz movement. It’s nothing particularly special, but it’ll keep the watch ticking and on-time for up to five years. It’s greatest plus point is that it makes the Arctic far more affordable than it looks.

Despite a cutting-edge case material, a look inspired by one of the most iconic watches ever built and a cool stealth colouring, the Arctic will set you back just £289. No matter how you cut it, that’s incredible value for money.