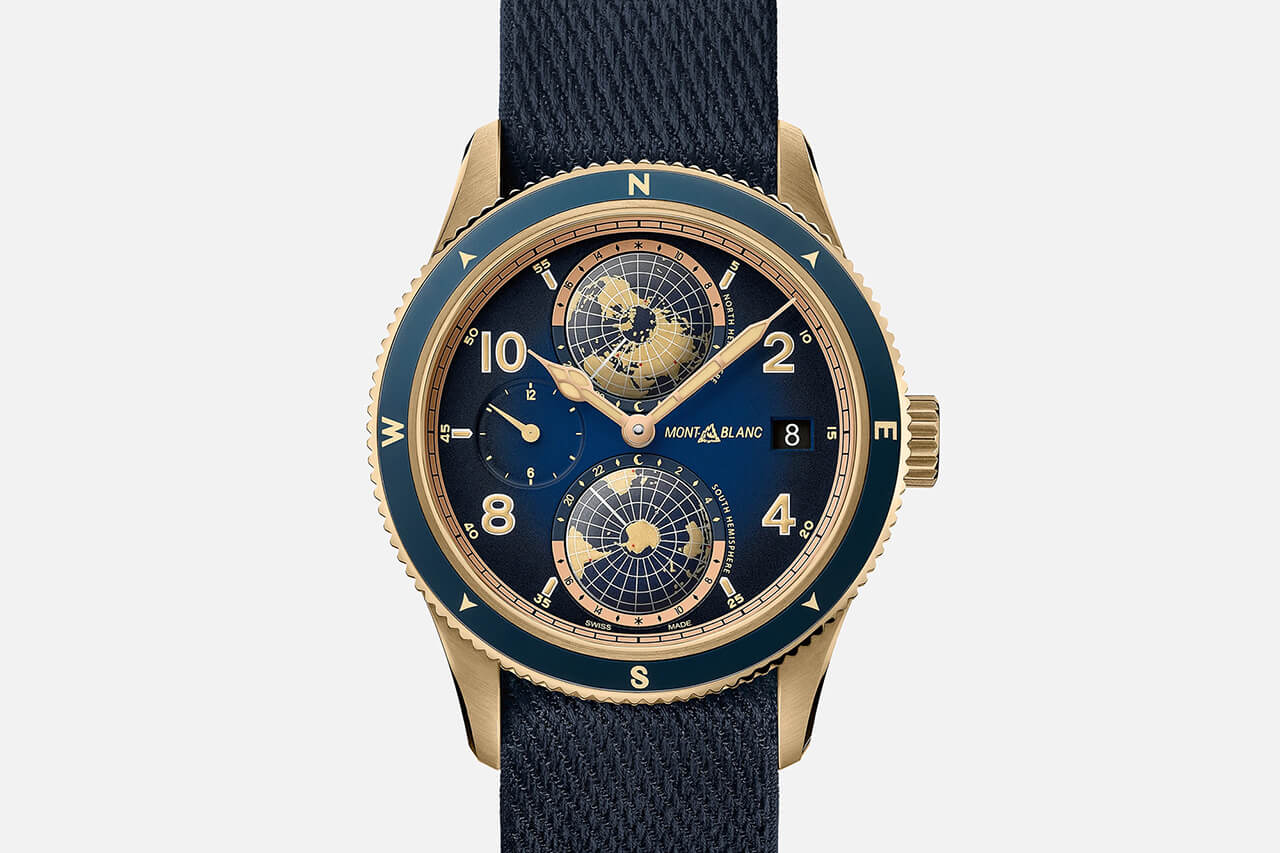 Montblanc’s no stranger to charitable initiatives, with partnerships with UNICEF, various educational foundations and now, the Messner Mountain Foundation, an initiative targeting schools in some of the most remote regions in the world. Along with the partnership comes, of course, a new limited edition: the 1858 Geosphere Limited Edition.

Reinhold Messner is a climbing legend. He was also the first person to climb all 14 peaks over 8,000 metres; he and German explorer Arved Fuchs were the first to cross Antarctica and Greenland on foot without the use of dog sleds or snowmobiles and he was the first to trek across the Gobi Desert. 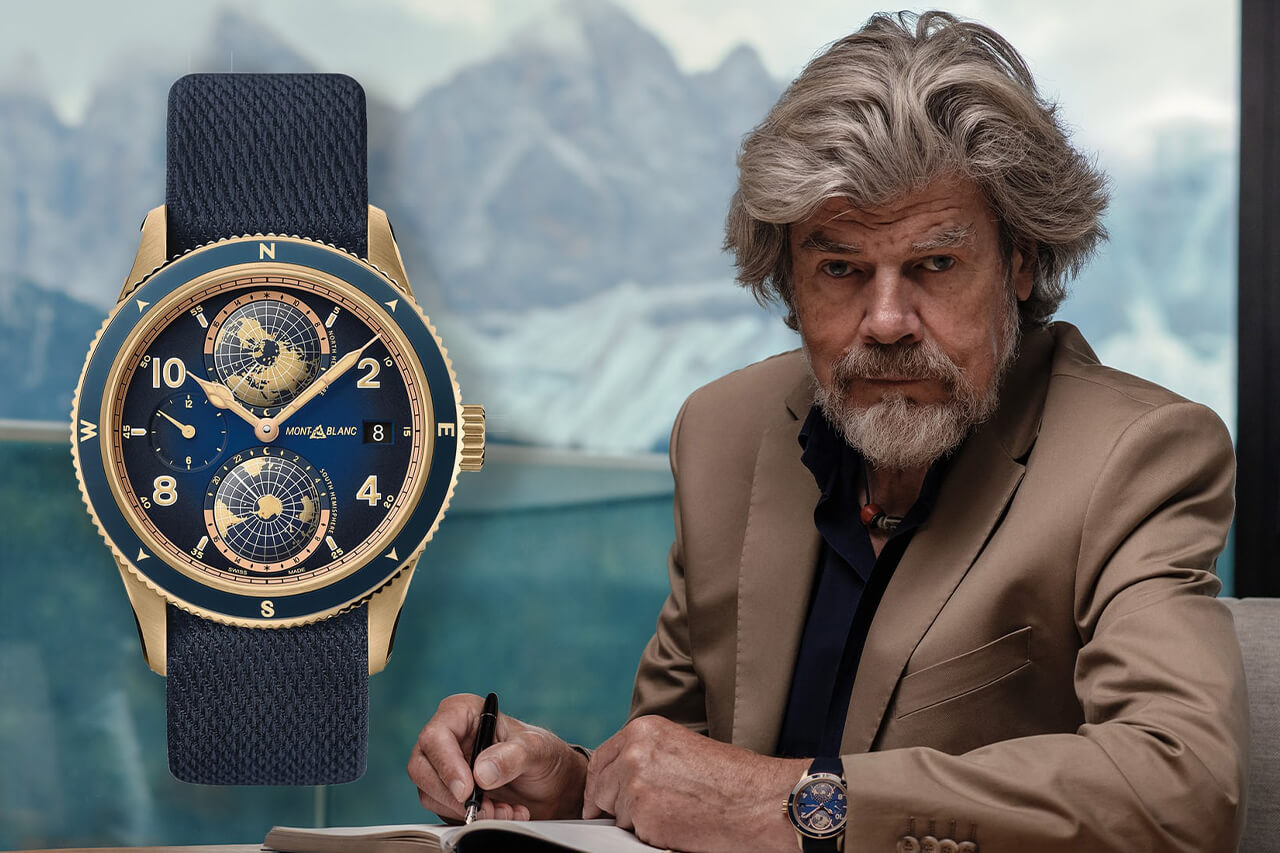 At first glance a complication like the Geosphere seems a little off-kilter for a watch dedicated to the mountaineer and explorer. It’s not exactly a field watch – but it does have a certain military heritage. After all, the Montblanc manufacture, Minerva that once was, has a pretty robust history of creating military timepieces and the 1858 collection as a whole has plenty of retro ruggedness to it. Plus, there’s something fitting about the view from the top of the world a la the Geosphere displayed in a watch revolving around mountaineering. 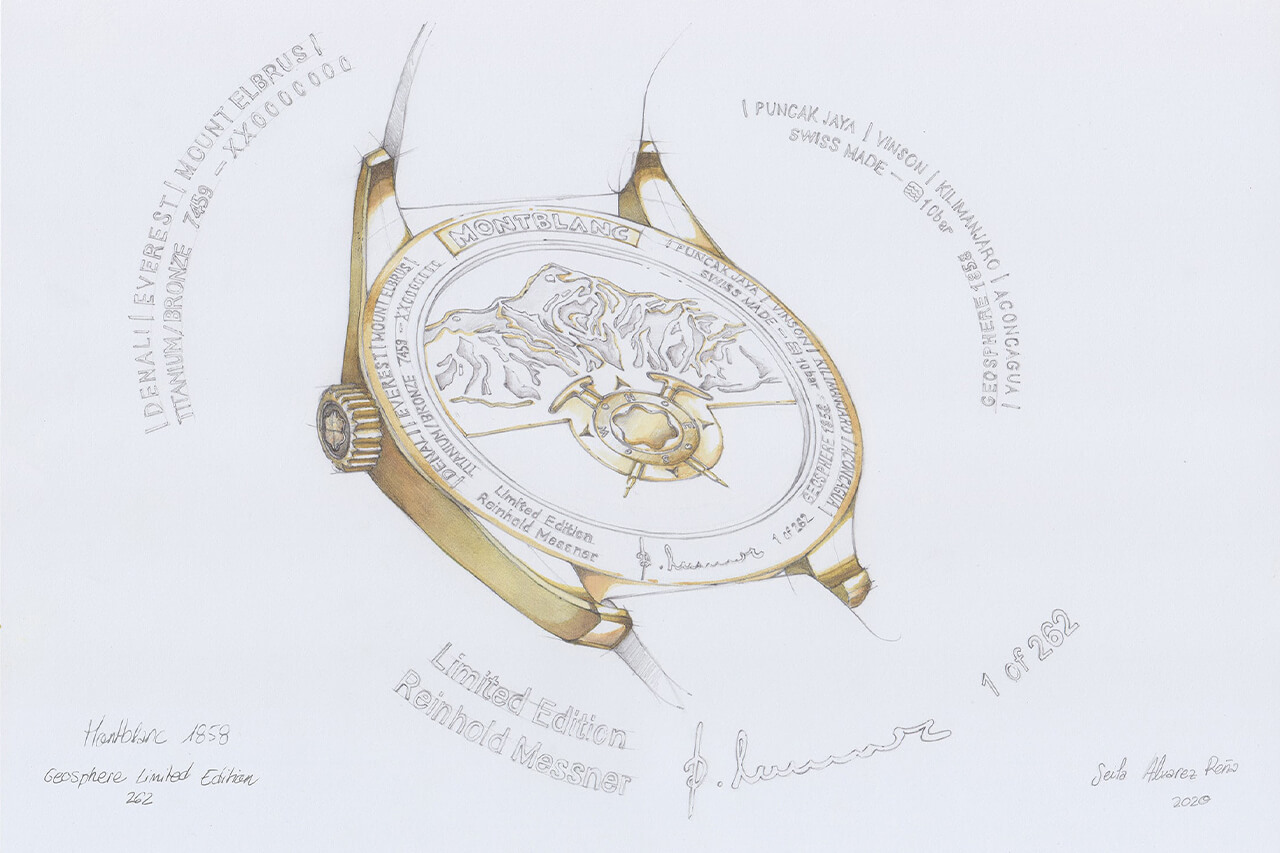 The new Geosphere has the same movement and sizing as the others in the collection – that is to say the Calibre MB 29.25 automatic movement with a 42-hour power reserve and a 42mm case. It also uses the bronze of Montblanc’s limited-edition Geosphere from last year, though with the khaki green switched for blue. 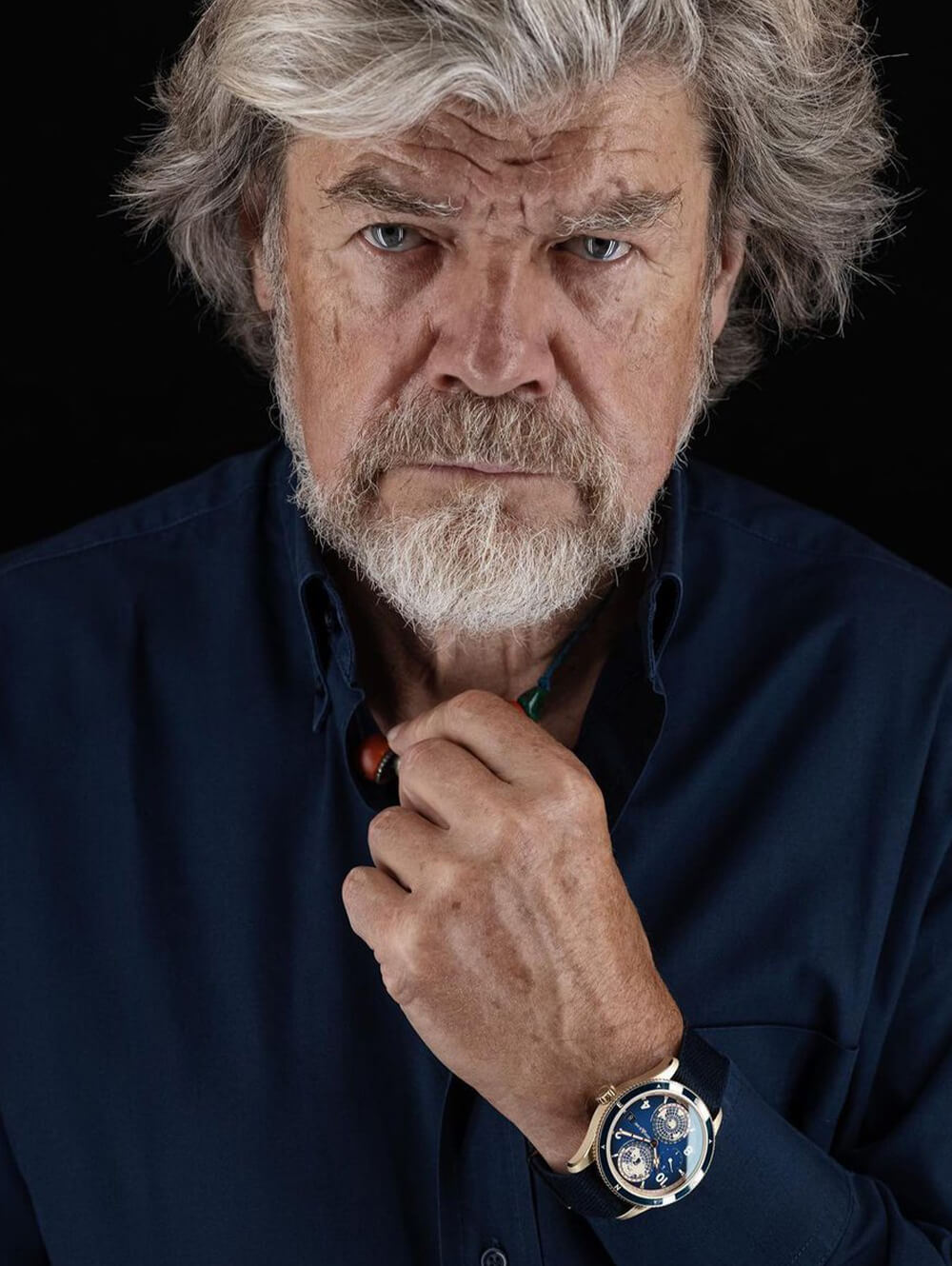 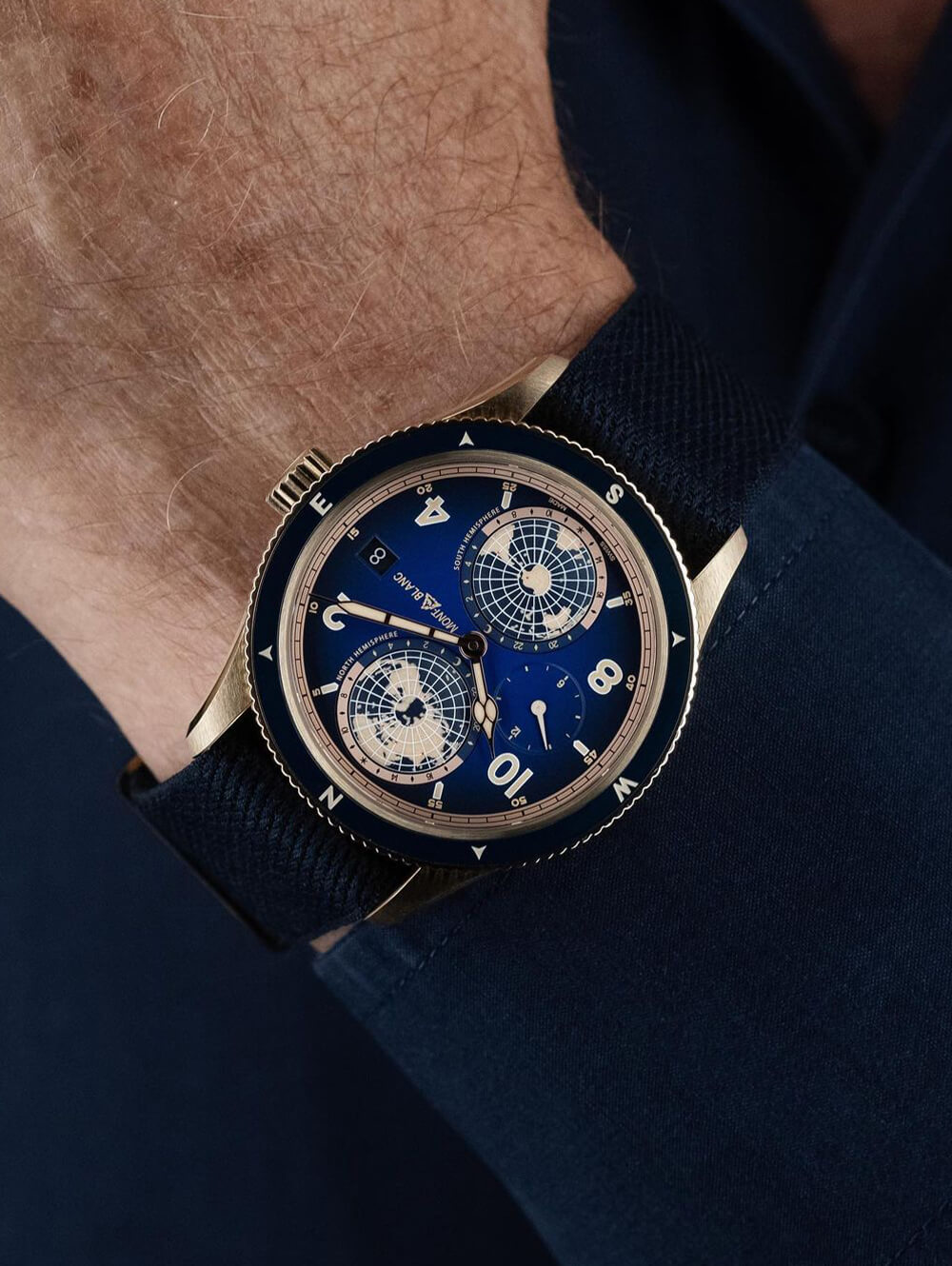 Though the colour switch is nice I do prefer the older green version, even if the exceptional amount of lume here seems to show up better. The reverse however reads like a summary of Messner’s astounding climbing career. Not only does it feature the watchmaker’s namesake peak, but a compass, two crossed pick-axes, Messner’s signature and the complete Messner’s list – the man’s own particular variation on how to climb the tallest peak on each of the seven continents. It’s also considered the hardest of all.

The final touch is the limited edition. 262 of this model will be available, a reference to the over 26,200 feet height of the tallest peaks on Earth. 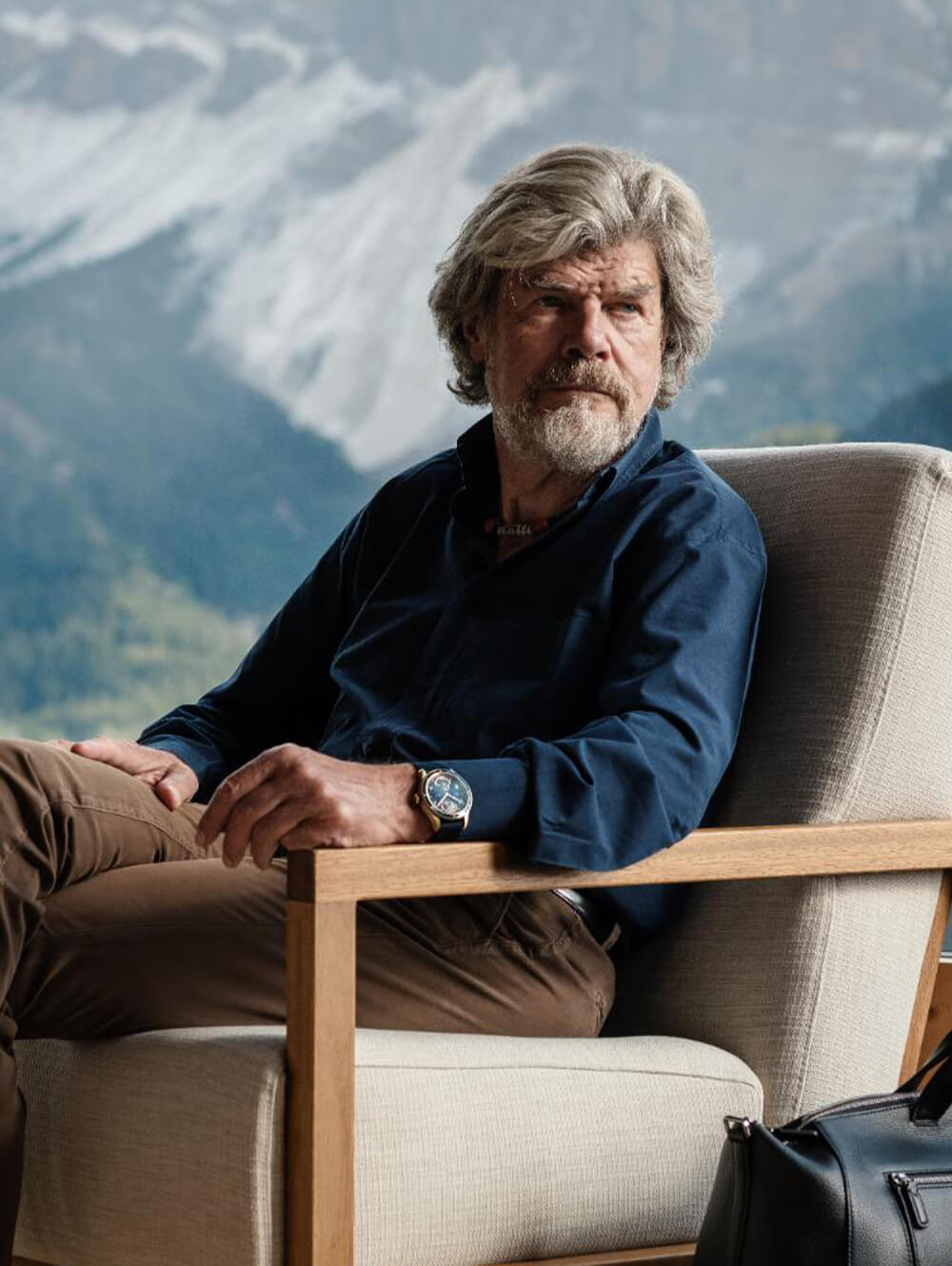 Finished on a particularly lovely blue NATO strap, the watch is only available in Montblanc boutiques, so your best bet is heading to Bond Street if you want to brave the outside world. It’s not quite one of Messner’s adventures but it’s enough for these days. Montblanc debuts a new gold alloy that’s sure to leave everyone green with envy. No matter your budget, cool wearable tech is well within reach. Whether you’re a couch-bound explorer, or a genuine Ranulph Fiennes, we’ve got you covered. The in-house powered worldtimer gets a limited edition upgrade.