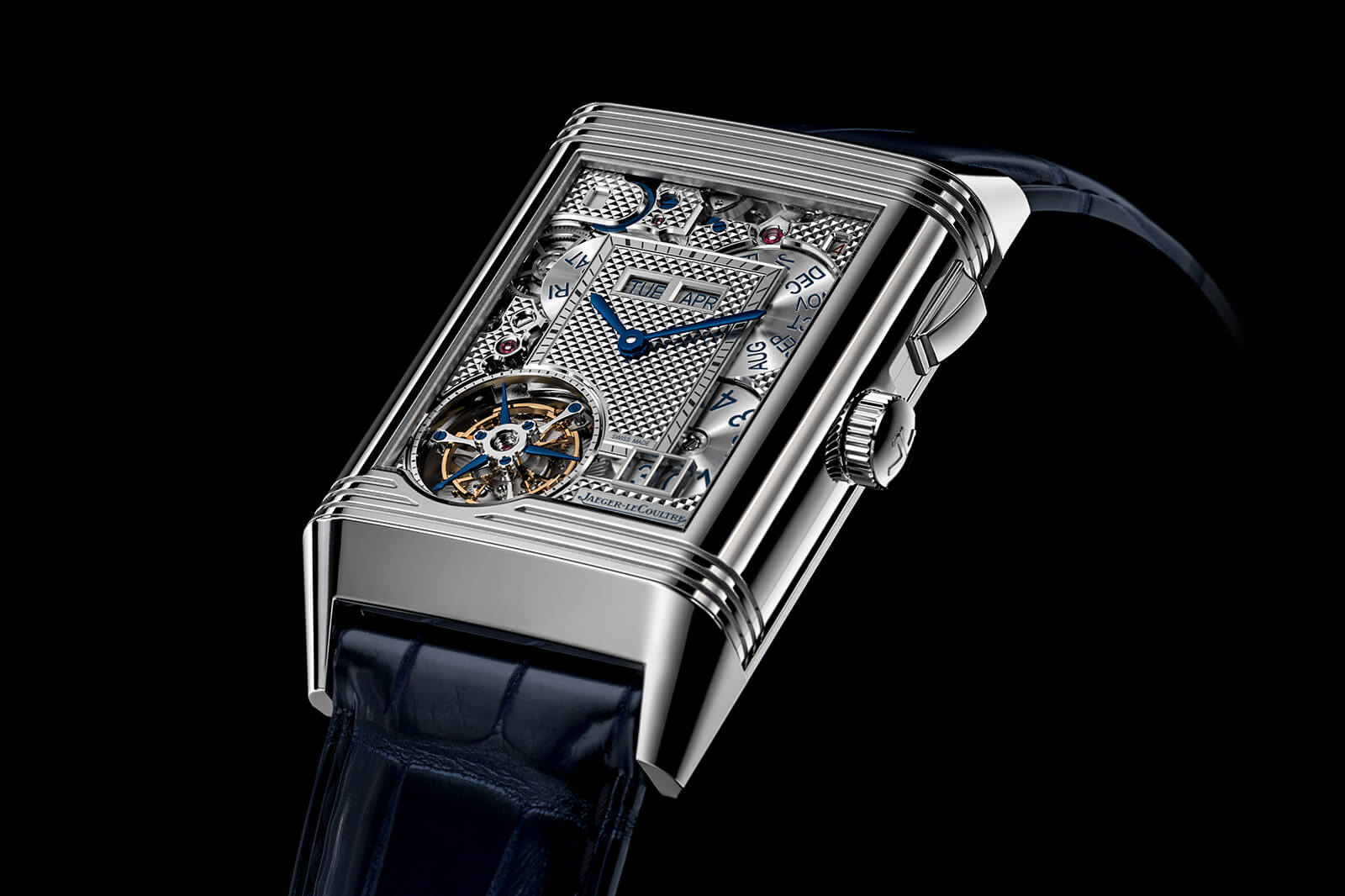 Another annual watch fair – albeit digital – and another huge slate of releases means that many a watchmaker might be finding it hard to stand out of the crowd this Watches & Wonders. After all, nearly 20 watchmakers are all putting their best foot forward this week and each has an impressive watch or two in their newly expanded catalogue.

But then there’s Jaeger-LeCoultre, who are in no danger of fading into the horological malaise thanks to the Reverso Hybris Mechanica Calibre 185. Each year JLC creates some show-stopping, often multi-axis tourbillon-equipped timepiece, always amongst their most complication. This year being the 90th anniversary of the maison’s most iconic piece, it’s the Reverso’s turn to undergo the Hybris Mechanica metamorphosis.

This is the most complicated Reverso ever built and looking at it I’m not surprised. Two faces good, four faces better. The reversing mechanism is actually the same as the standard, two-faced Reverso Duetto, with one dial each side of the main body of the watch. The difference here is the rest of the case, normally just steel frame, has a pair of dials all its own, one hidden underneath the reversing dials, one on the back of the watch. So, let’s take a look at what’s actually included in the Quadriptyque. Hint: a lot. 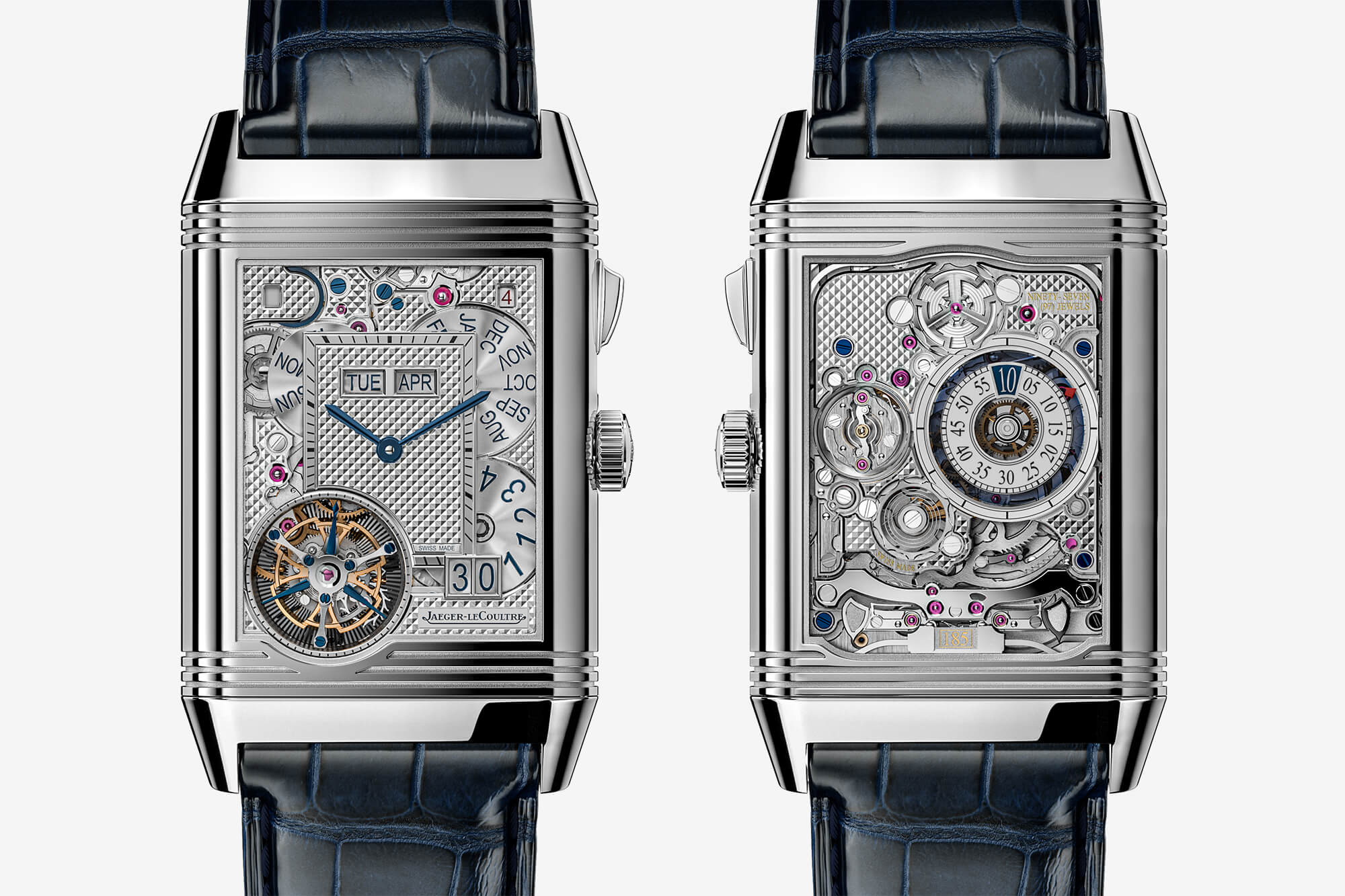 The first dial of course houses a tourbillon. Not one of Jaeger-LeCoultre’s ultra-specialised Gyrotourbillons, but a beautiful flying number all the same. It makes one rotation a minute, allowing it to double as a second indicator. It’s joined by a particularly lovely perpetual calendar showing day and month in windows at 12 o’clock and the date in the bottom-right corner along with the leap year indicator.

The rest of the dial is open, showing off the various indicator wheels underneath. It’s also finished impeccably, with Clous de Paris across both the geometric centre and the upper bridges. You could almost lose track of the simple, blued steel minute and hour hands dead centre. It’s a stunner… and we’ve just started. 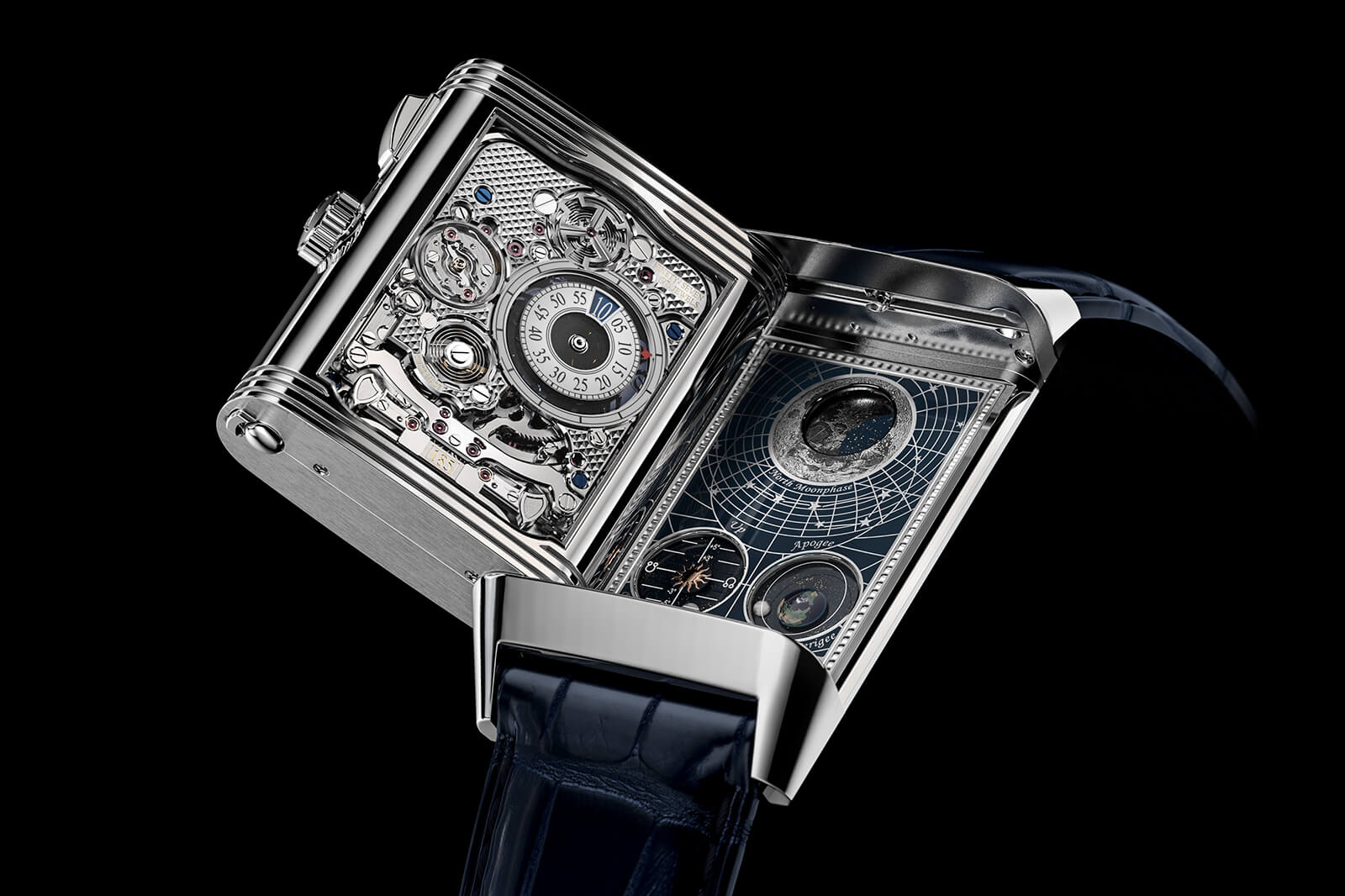 Doing what the Reverso does best takes you to the next dial, even more intense than the first. If the visible chime didn’t give it away, this side is a minute repeater, which sounds out the hours in low notes, quarters in alternating low and high notes and the remaining minutes in high notes.

The main innovation here isn’t that the trebuchet hammers, gongs et al are on display, it’s the lack of dead time. Normally there would be a bit of time between the hour chiming and the quarters; not here. It goes right from one to the next without pausing for breath. How that impacts its usefulness I’m not sure, but the Quadriptyque is about insane watchmaking, not practicality.

The face is completed with jumping digital hours (the white number on a blue background) set at 12 o’clock of the minute indicator. Again, there’s plenty of Clous de Paris and flashes of blued screws and rubies throughout, though the whirring of the minute repeater is still the main event.

Exhausted yet? Well, two down, two to go – and fortunately the last two are a little less intense. 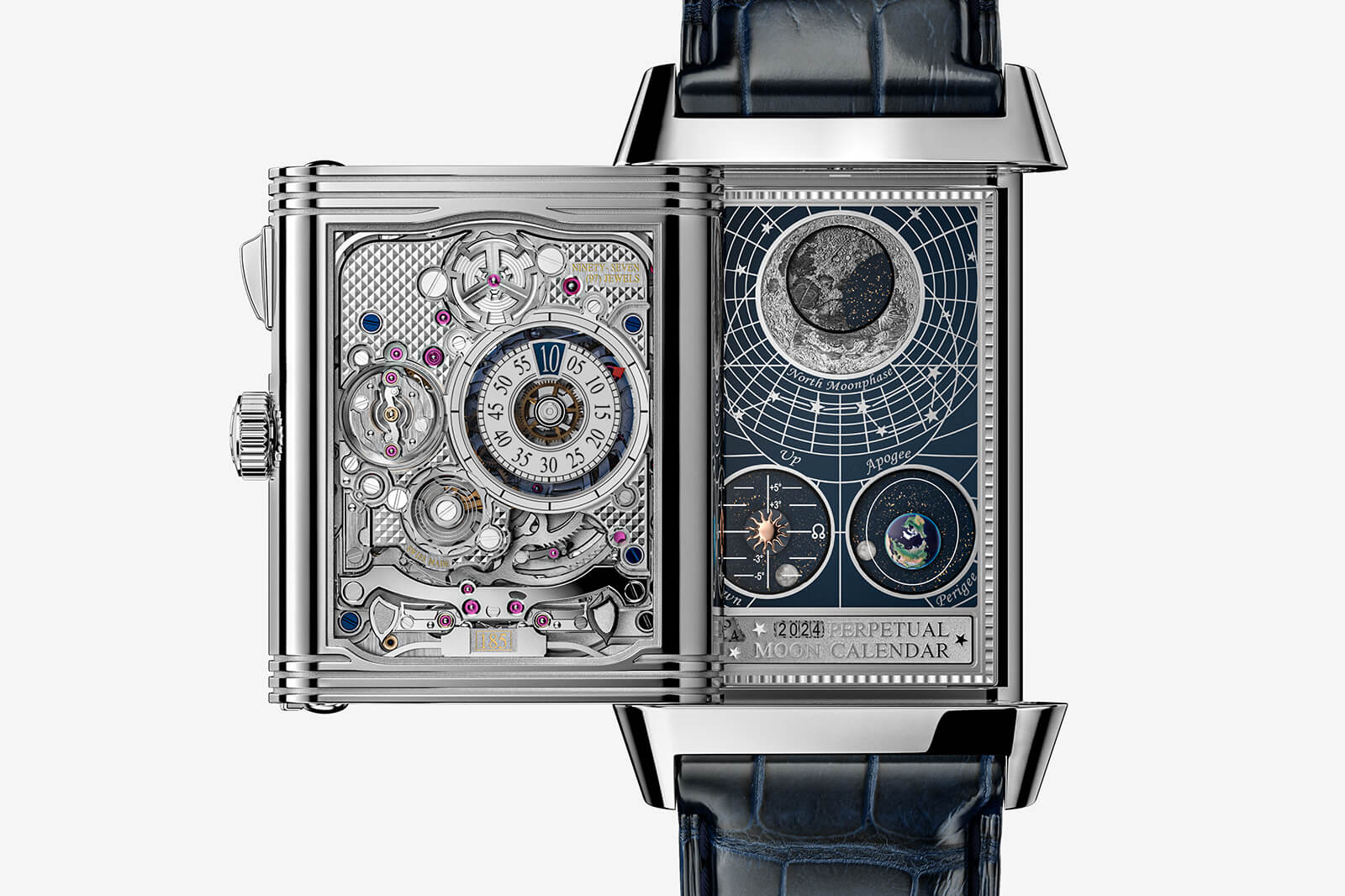 The third dial is devoted to the moon in all its various forms. There’s the standard moon phase, set for the Northern Hemisphere along with the Draconic Lunar Cycle and Anomalistic Lunar Cycle.

Until this watch, I’d not heard of those last two so a quick explanation. The lunar orbit has two nodes: Perigee and Apogee, denoting either end of its elliptical orbit. A Draconic Cycle is average time it takes for the moon to reach the same node, which takes exactly 27 days 7 hours 43 minutes and 5 seconds.

The lunar orbit isn’t fixed and actually rotates slightly as it goes, one rotation every 8.85 years. The Anomalistic Cycle is how long the moon takes to orbit the earth, taking this rotation into account and therefore taking a bit longer than other cycles. This takes 27 days 13 hours 18 minutes and 33 seconds. In case you were wondering, how the moon appears in the sky – the standard moon phase – is known as the synodic cycle and takes just over 29 days, hence our calendar months. Now you know. 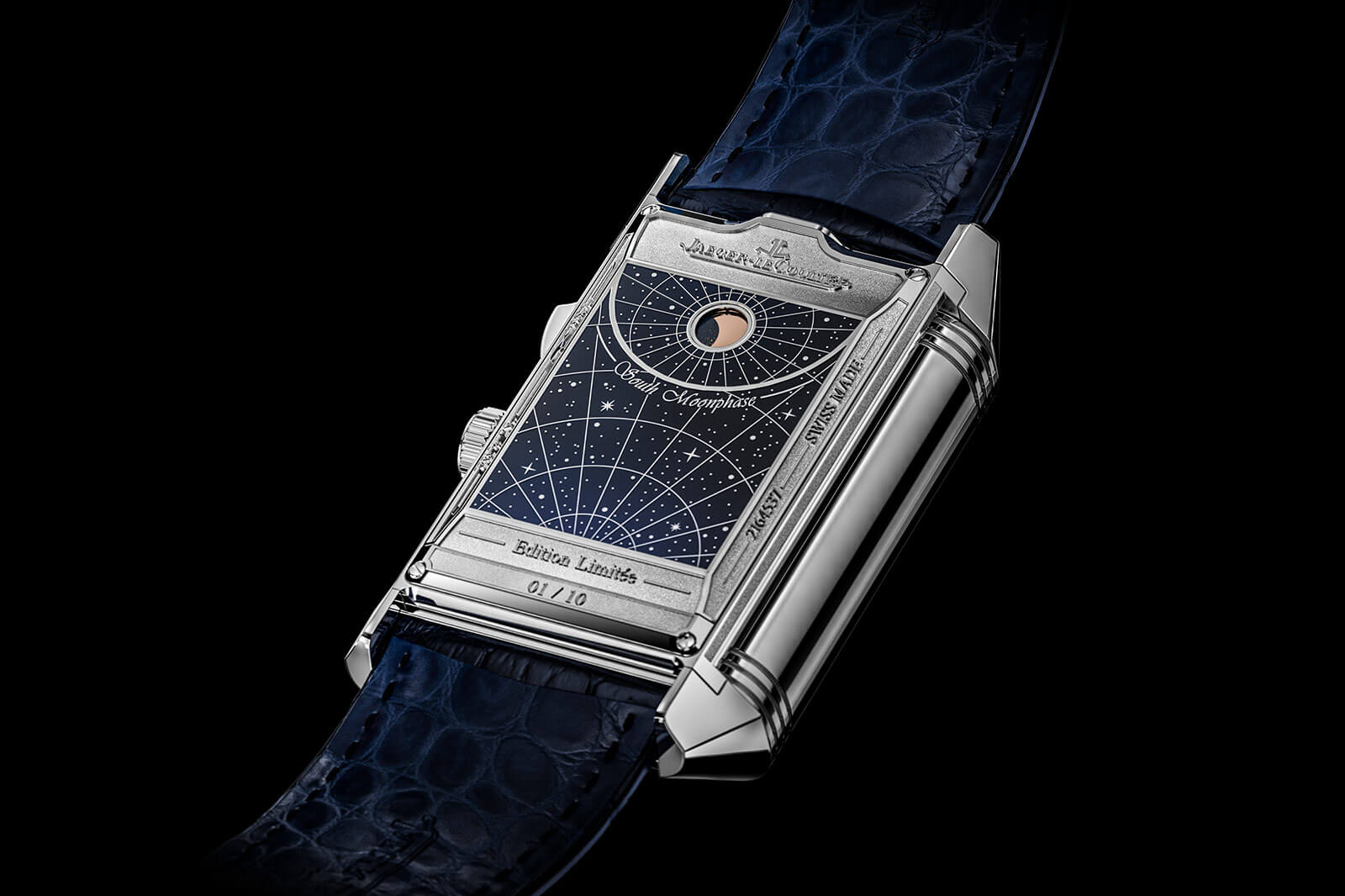 Finally, we come to the fourth dial and by far the simplest: the southern hemisphere moon phase. I know, after all that it’s a bit of an anti-climax. I assume Jaeger-LeCoultre were running out of space by this point. At least it’s finished beautifully with blue lacquer.

This is a completely insane watch and not meant for daily wear. It is however a serious flex from Jaeger-LeCoultre and a show-stopped in the truest sense. Honestly, I’m surprised they’re making as many as 10 of them. As for price… well, if you need to ask, you’re probably not the target audience.