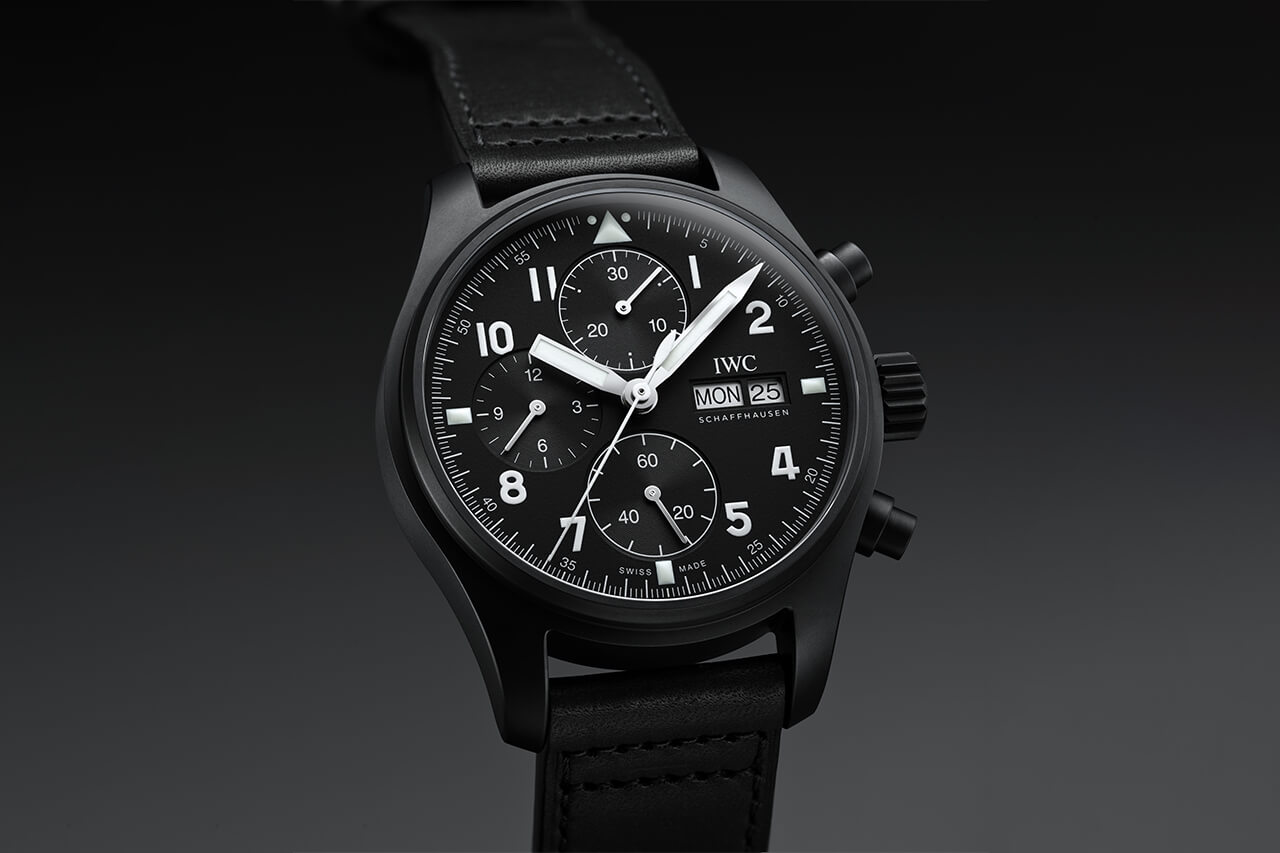 In the watchmaking industry it’s impossible to predict which timepieces are going to become successes. For example, IWC’s Ceramic Flieger chronograph (ref. 3705) – more commonly known as the Black Flieger – was more or less a failure at its release in 1994, discontinued after approximately 1,000 models were sold. However, over the next quarter-century its unexpected exclusivity and neovintage charm made it a cult hit, resulting in IWC releasing a limited edition “Tribute to 3705” pilots chronograph.

As you’d expect from a tribute, the design is almost an exact replica of the heritage piece. The blackout styling is sleek and sexy (not dissimilar from the IWC Top Gun SFTI ), presented here with a 41mm case made from IWC’s new Ceratanium material, which we’ll look at in more detail later. 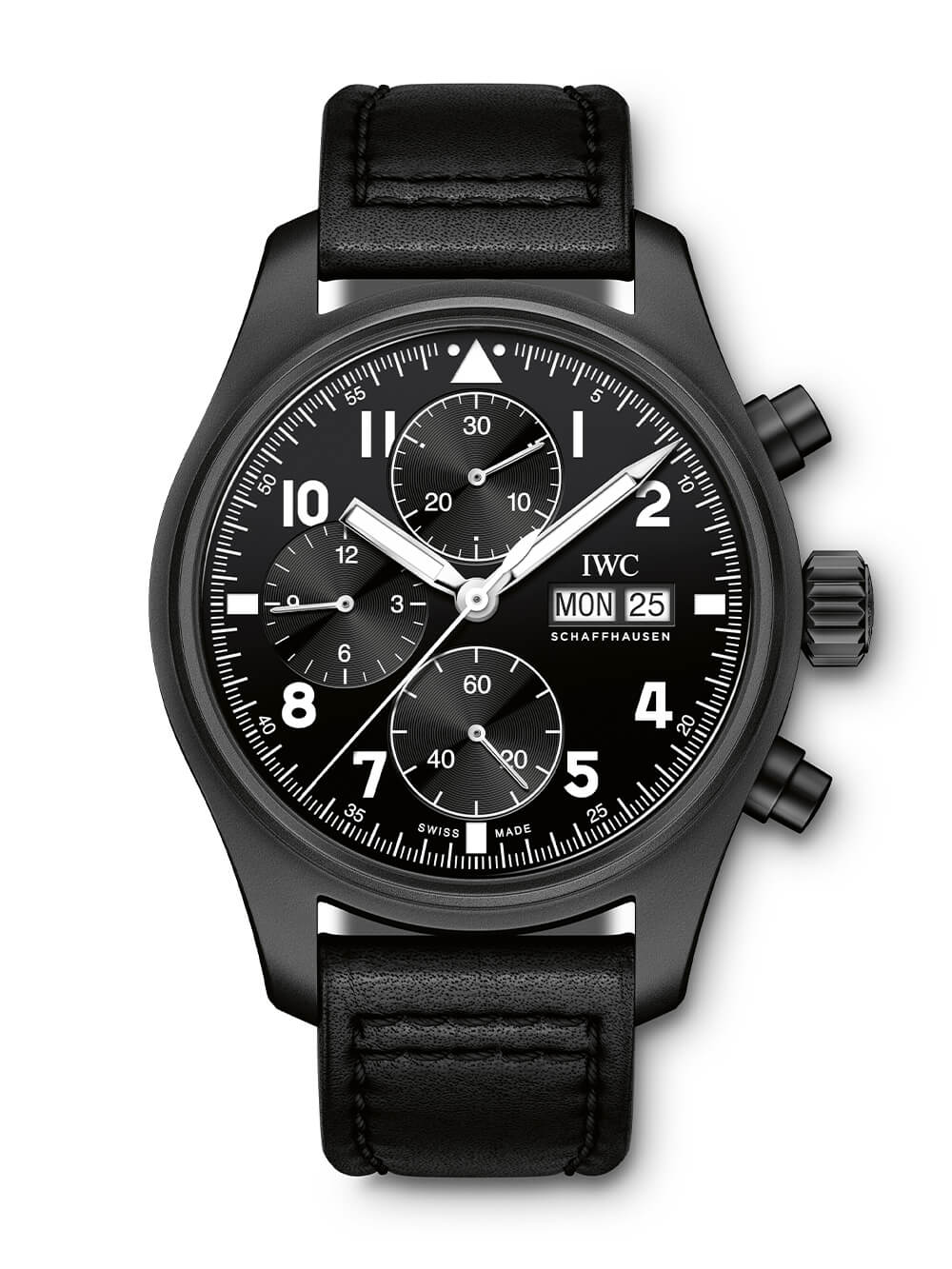 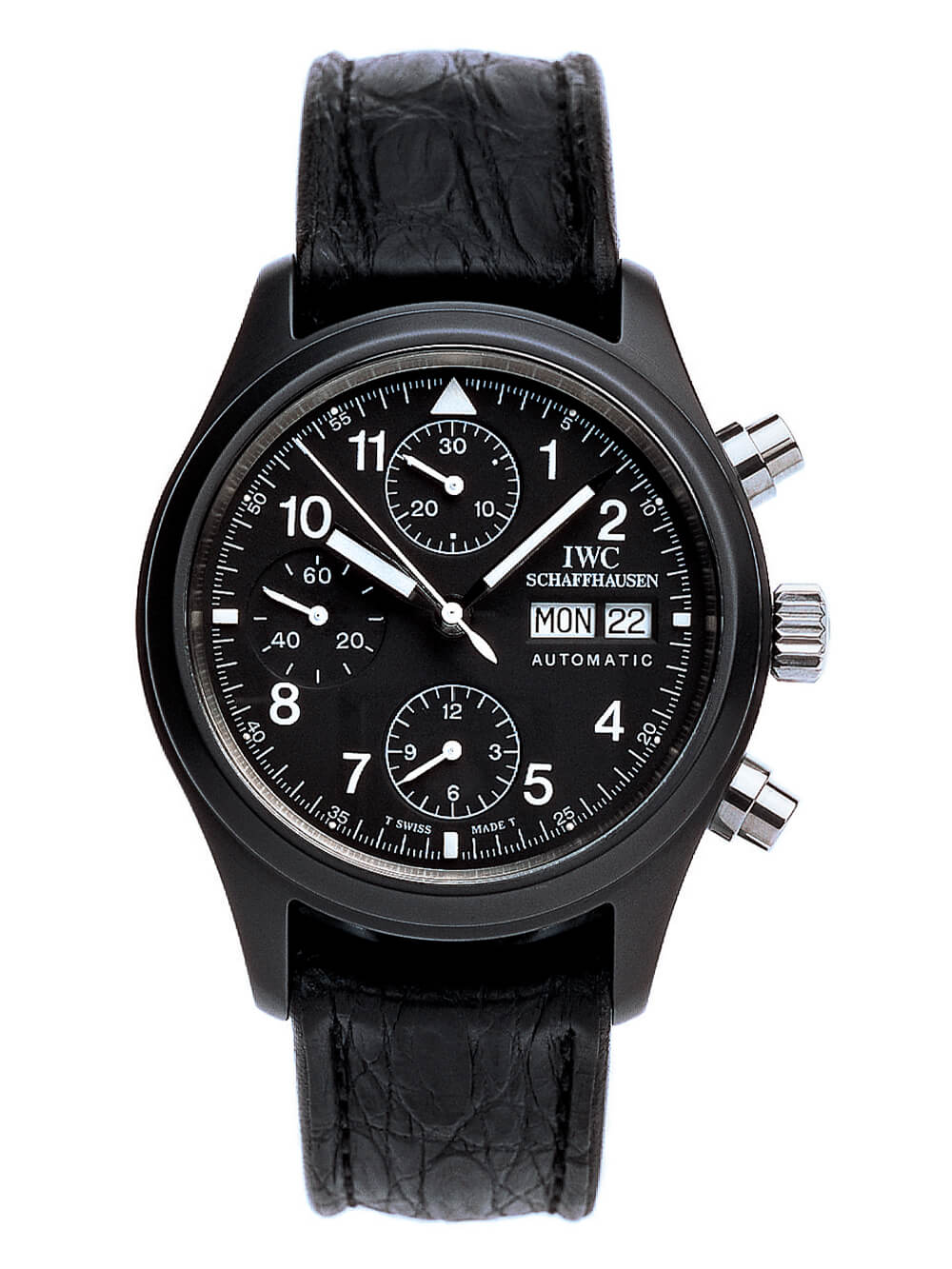 The dial layout replicates the original too, with two totalisers at 12 and 9 o’clock displaying 12-hour stop times, a small seconds at 6 o’clock and a day-date display at 3. What we consider in 2021 to be a classy, simple finish was considered boring in 1994, showing how tastes change over time.

I mentioned above that the Black Flieger Tribute is made out of a new material developed by IWC, eschewing the original’s ceramic composition. The very fact that IWC has created a material superior to ceramic is impressive in itself as ceramic is still considered to be at the forefront of watch material innovation. 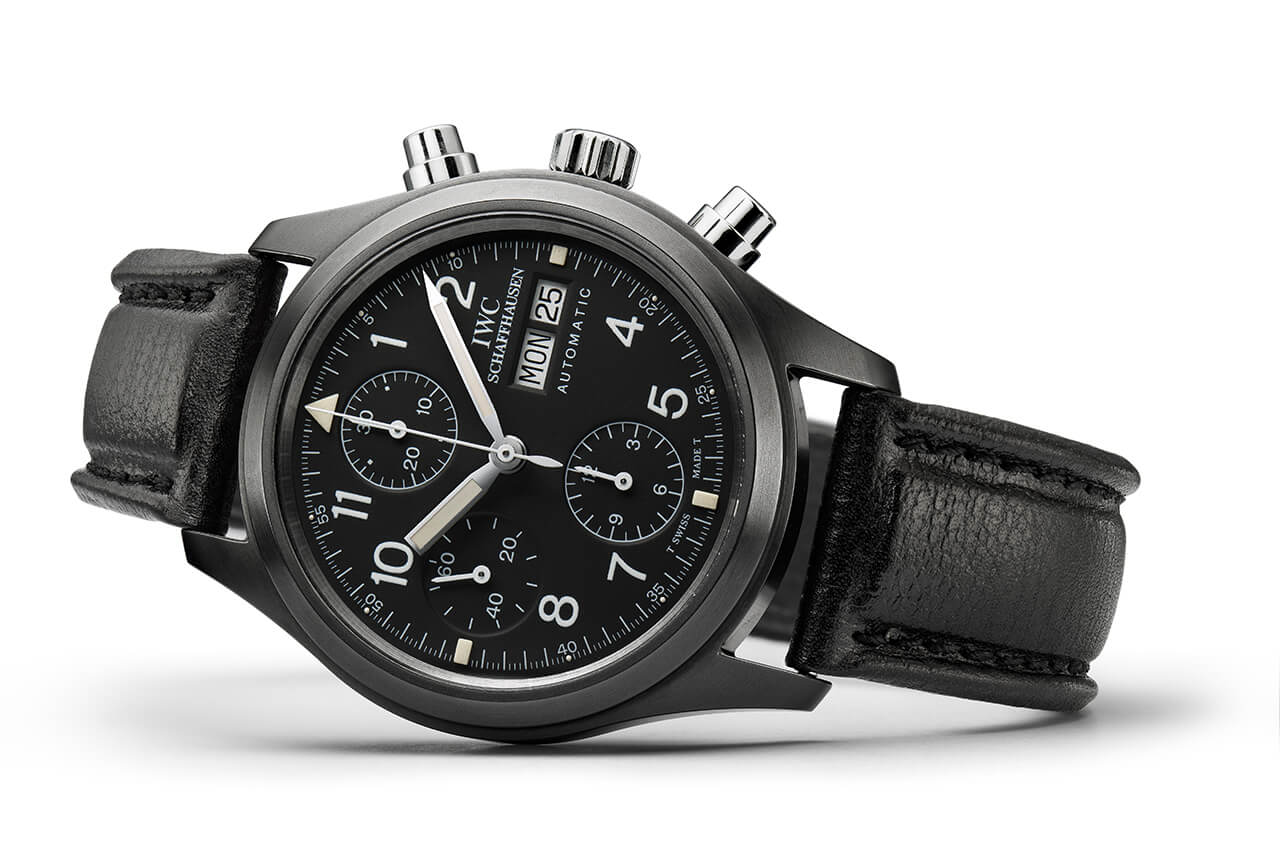 The new development, called Ceratanium, is crafted from titanium that under goes a similar firing process to ceramic, resulting in a material with all the innate strength and lightness of titanium but with all the durable, scratch-resistant properties of ceramic. This watch is not only a tribute to the Black Flieger but also an upgrade.

That spirit of upgrade and innovation continues on the inside. The original 1994 specs were adequate, powered by the Valjoux calibre 7750, but nothing terribly special. This time round IWC are determined to do the watch justice with an in-house calibre called the 69380, which is one of the brand’s latest chronograph developments. It features a classic column wheel design combined with an innovative bi-directional pawl winding system to create a power reserve of 46-hours. 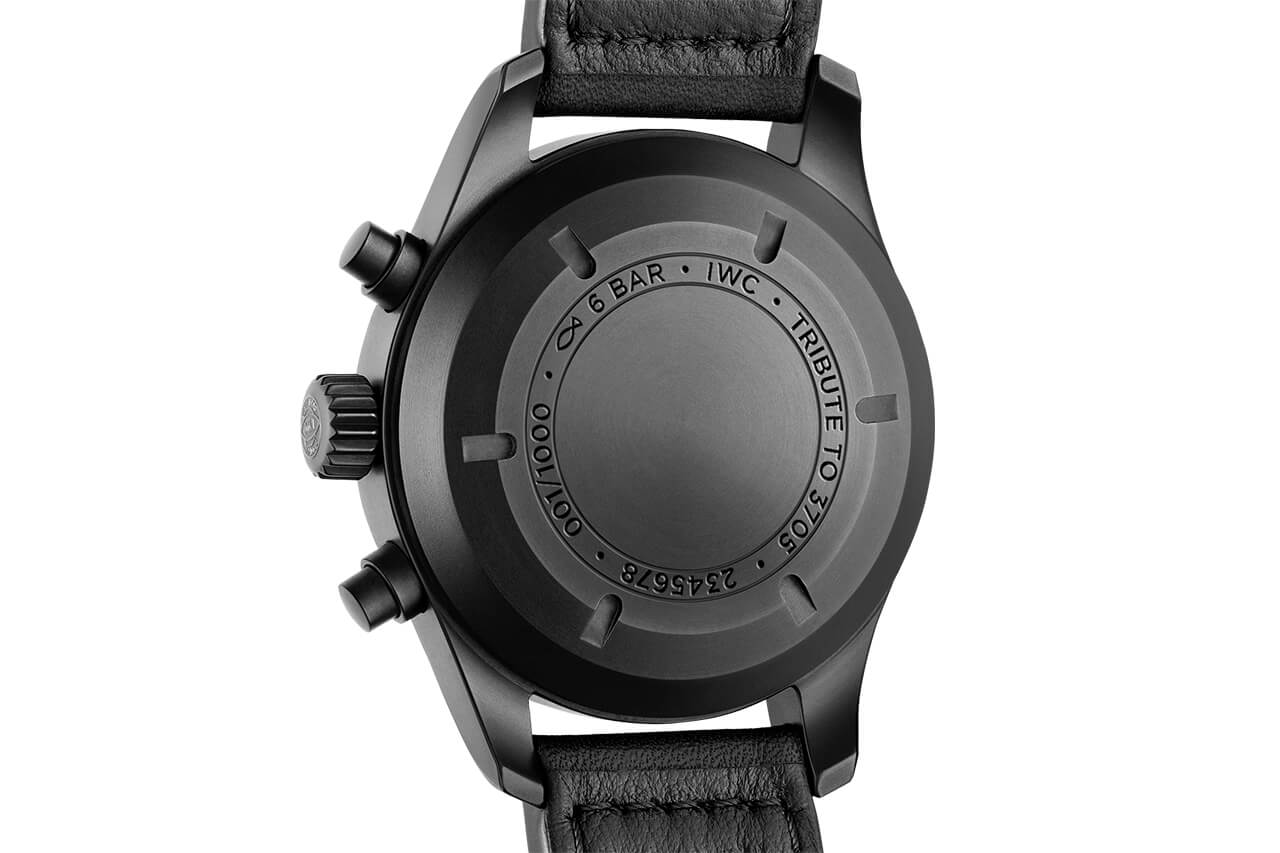 In some regards, this watch’s greatest success is the failure of the original in 1994. It gave the Black Flieger an underdog appeal, a story that people could invest in and relate to that only enhanced its rugged style and attitude. The “Tribute to 3705” captures all of those intangible qualities and understands their importance – it will be limited to 1,000 pieces echoing the number of Black Fliegers that were sold in 1994 before production ceased, maintaining its status as a cult icon.