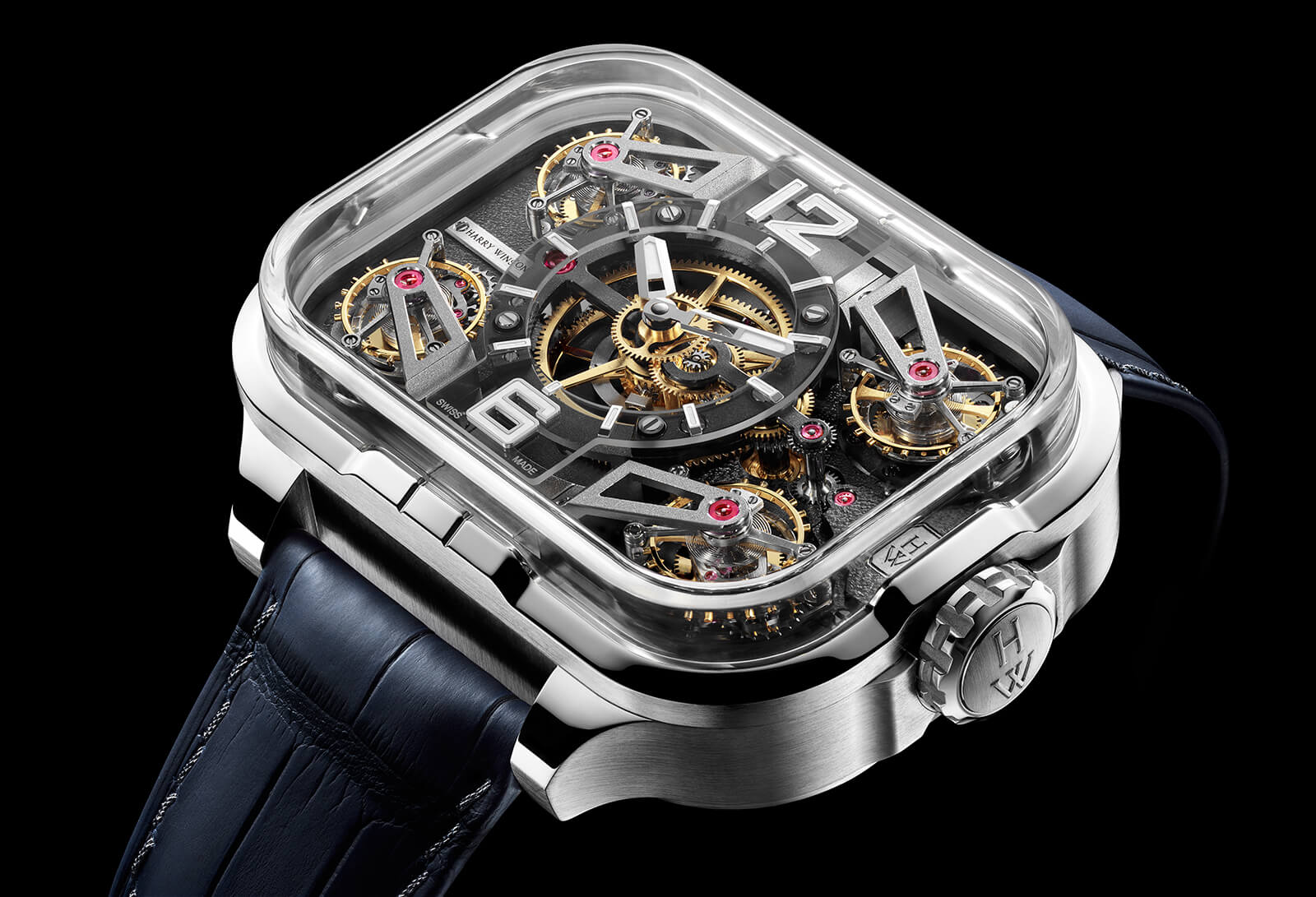 Tourbillons are everywhere; you’ll be hearing the word a lot in this piece alone. They’ve just about become shorthand for haute horology. The latest and final edition of the “Histoire de Tourbillon” series from Harry Winston however is shorthand for ‘when is enough, enough?’ That’s because rather than being content to fit one tourbillon in there – or even one multi-axis tourbillon – the new Histoire de Tourbillon 10 contains four separate tourbillons.

Designed to celebrate the 10th anniversary of the Harry Winston collection, the latest Histoire de Tourbillon is the first series-produced timepiece and the world’s first tourbillon of its kind. That’s not to say there will be many of these beauties of course; there are two versions, each limited to 10 examples each and a singular piece that’s unique. 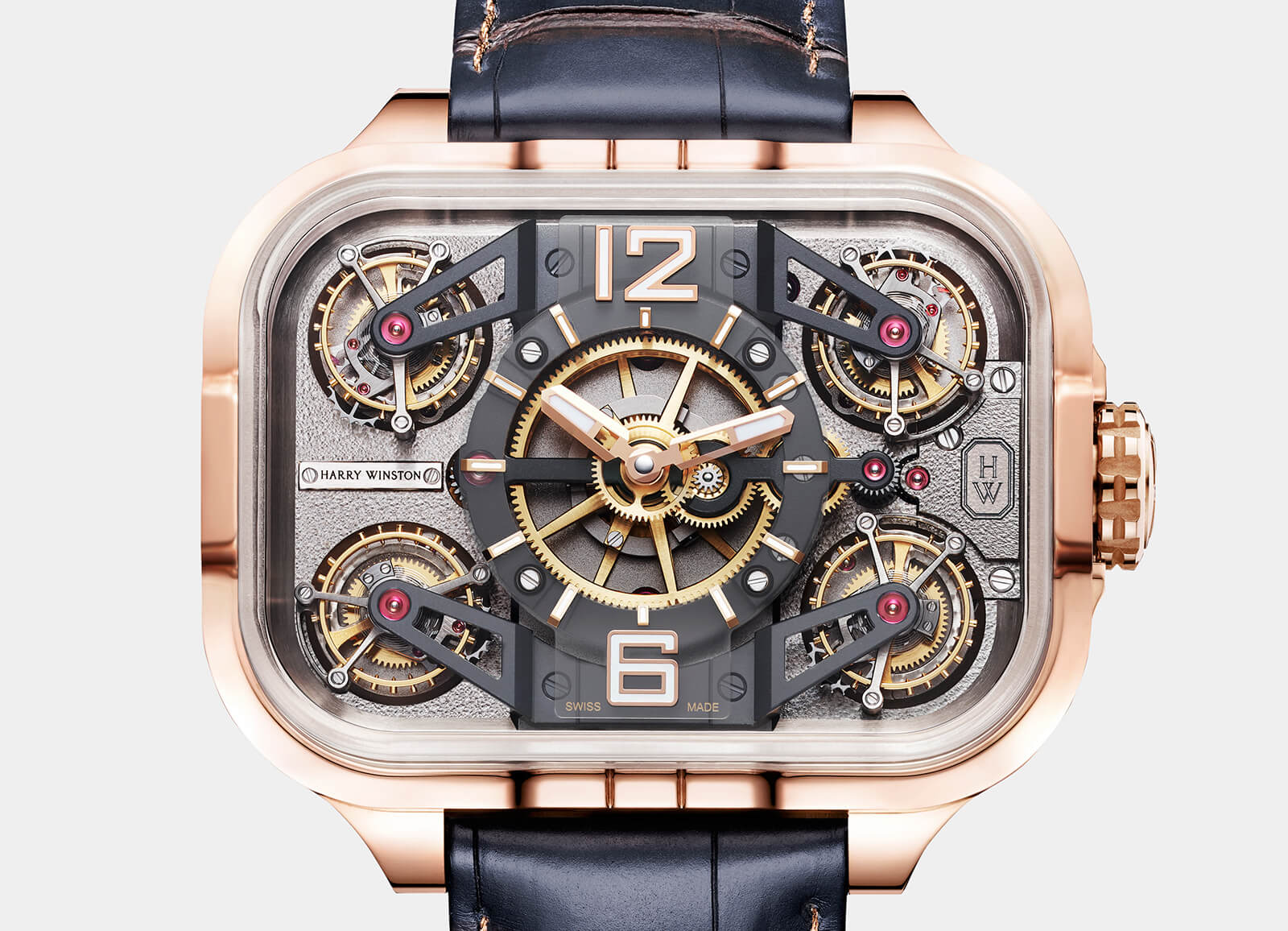 I’m not going to go into the mechanical minutiae of precisely how these pieces work, but the general conceit is that the four tourbillons help each other out. Each adds it’s own little gravity offset to the whole movement and, while there may be diminishing returns, make the watch ever more accurate. 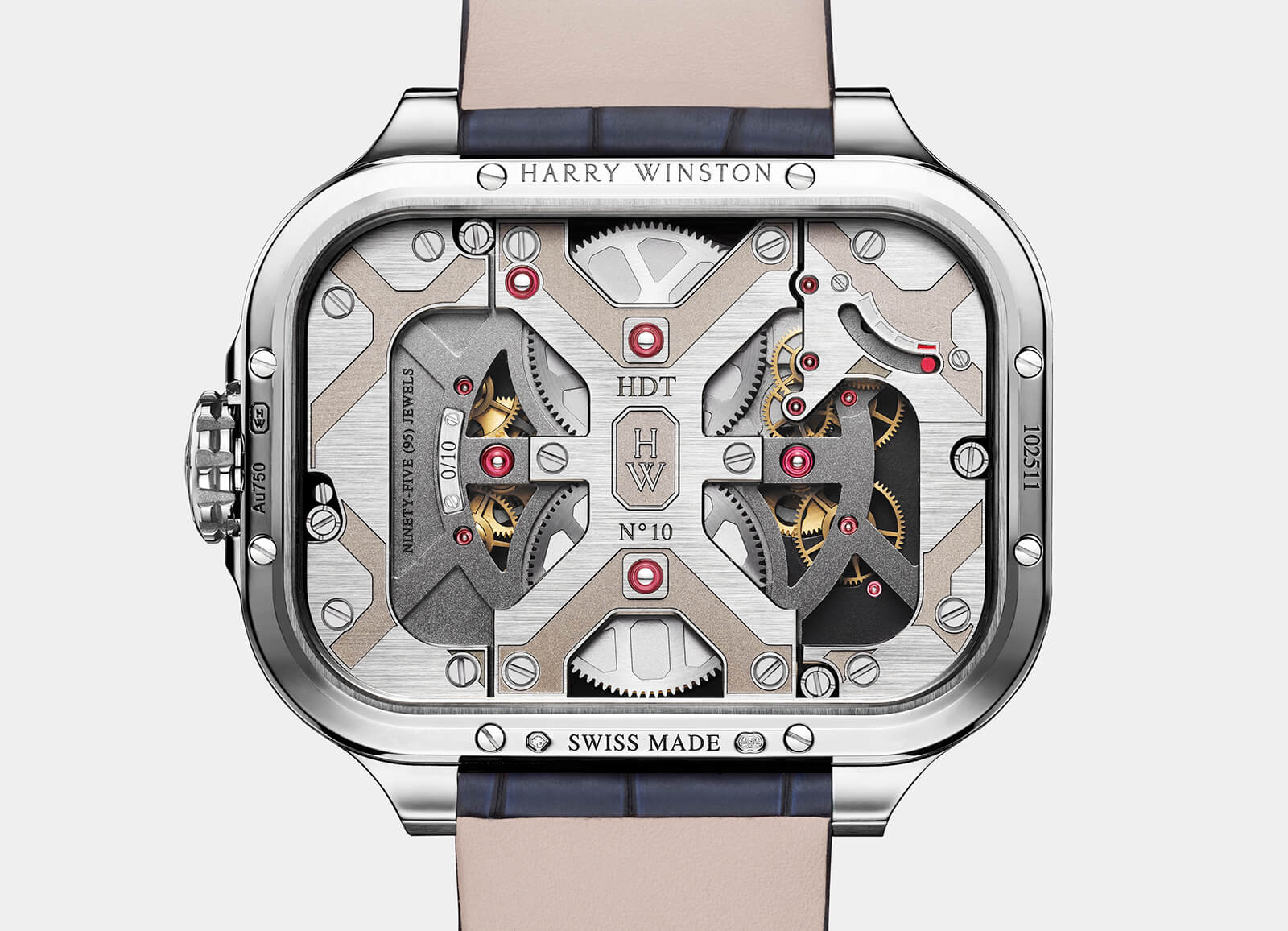 Let’s be honest though, the complication is there mainly to look pretty – and pretty it does. The beast of a 53.3mm case is massive, similar to the incredible Resonance watch from Armin Strom, albeit slightly more muscular. A tourbillion holds court in each corner while angular bridges link them to the central body of the watch, all of which is clearly visible. There’s a spectacular contrast between the open, turning cages and the otherwise rigid geometry of the case and its matte dial. 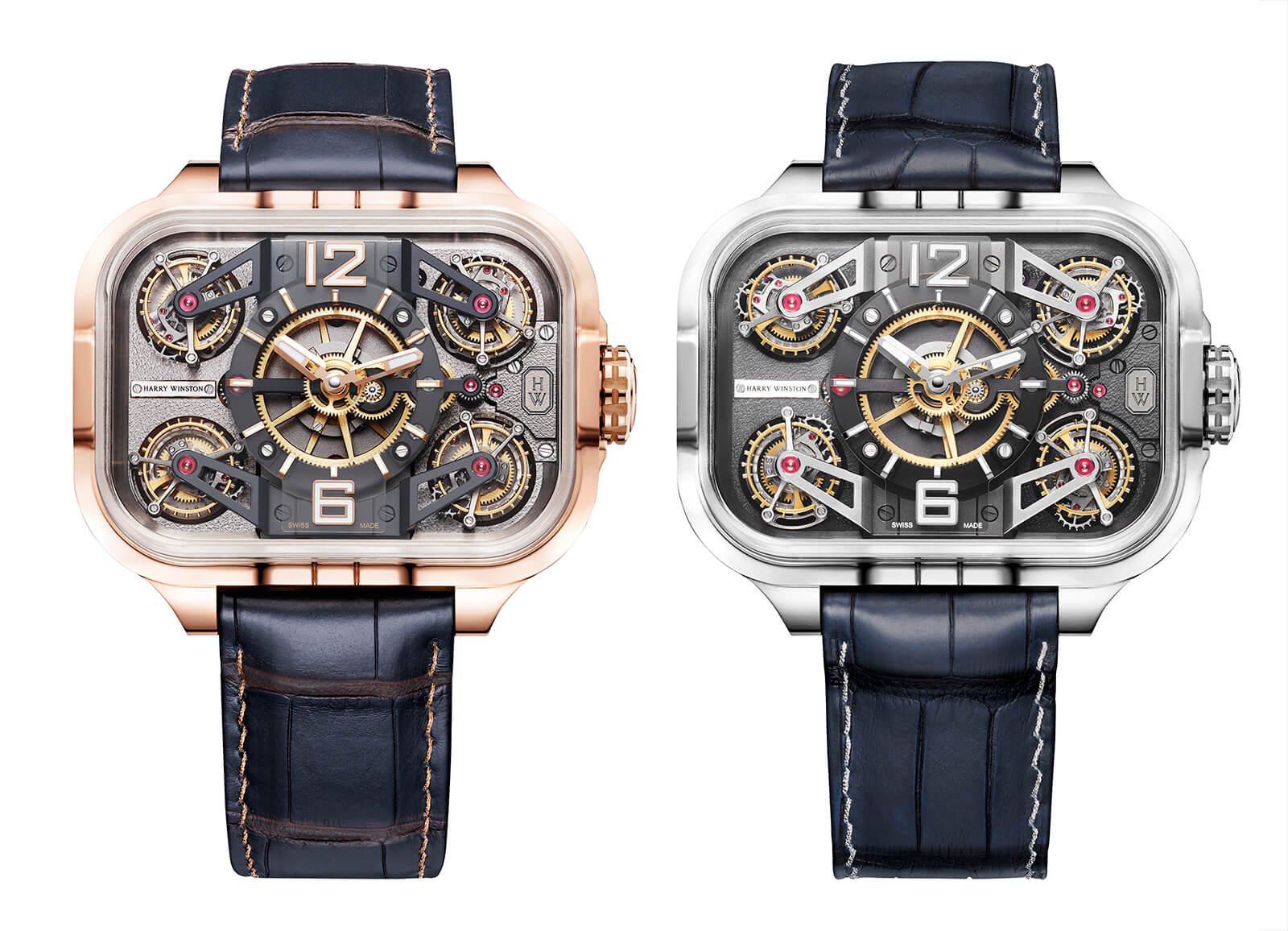 The watch is available in two styles, though both share the same construction and dimensions. The white gold edition comes with rhodium-plated bridges and a platinum dial while the rose gold edition switches the two around. It’s a nice change but nothing intrinsically impressive. Then there’s the piece unique, the Winstonium model.

Winstonium is basically a precious metal alloy based on platinum unique to Harry Winston, complete with it’s own, charming hue. To denote this particular model, those huge tourbillon bridges are made from blued steel. It is spectacular. The blue dominates the dial – as it should – with an eye-catching flash of contrast against the grey case, darker dial and golden tourbillon cages. 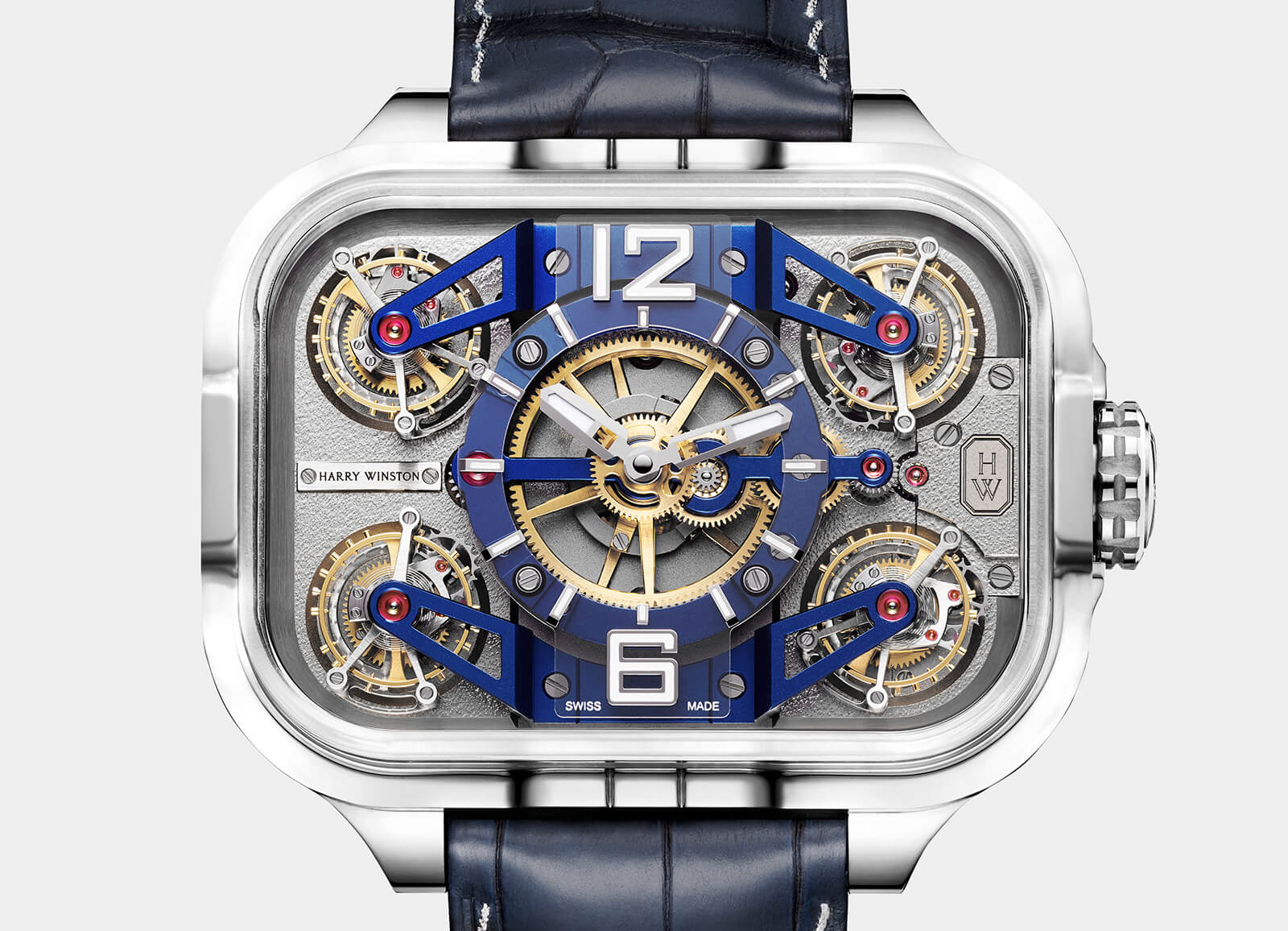 Harry Winston may have put a halt on the “Histoire de Tourbillon” collection and their famous Opus pieces, but it’s nice to see them go out with a bang. It’s the first time the jeweller come watchmaker has done a piece quite like this; it’s just a shame it’s the last.