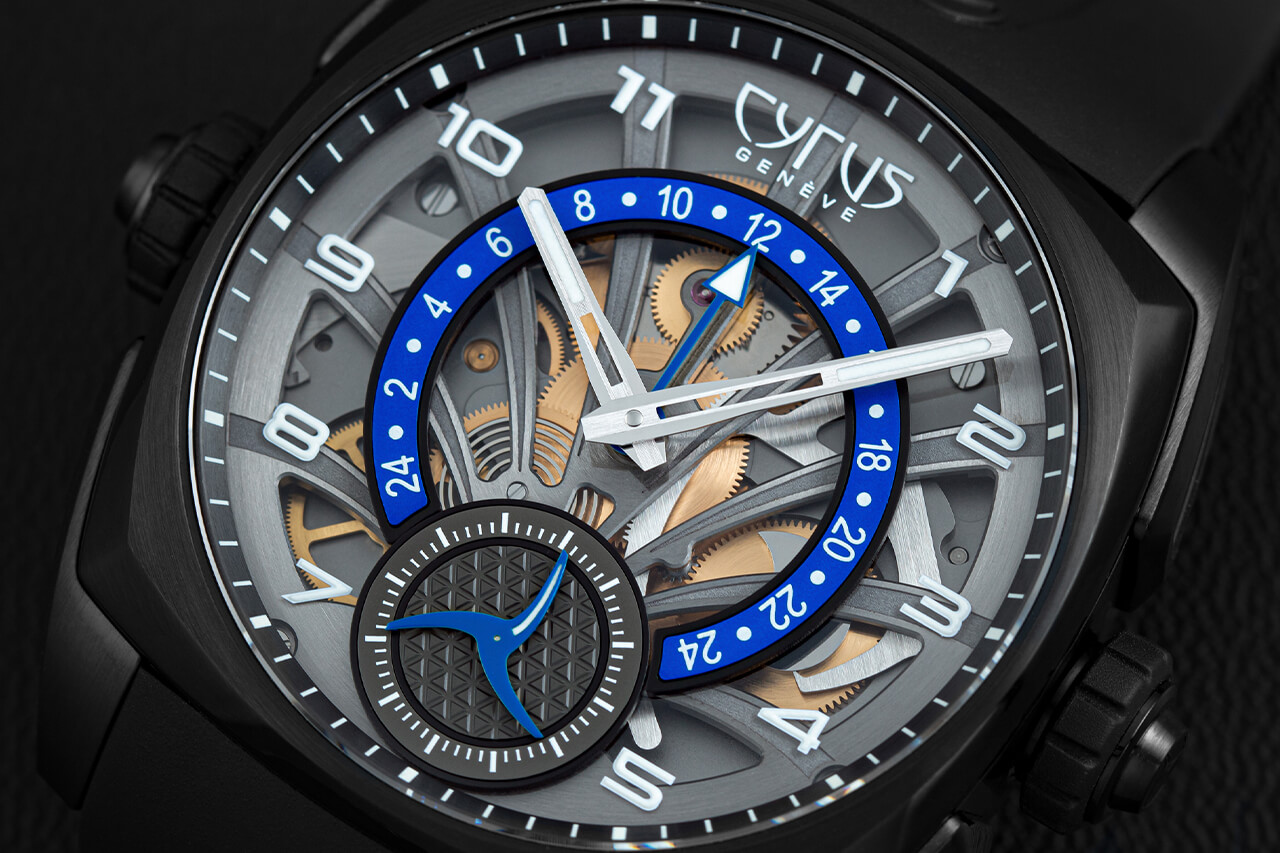 Cyrus has spent the past decade developing a reputation for exuberant, oversized precious metal sports watches, with designs so loud in places that they threaten to drown out the presence of softly-spoken master watchmaker Jean-Francois Mojon.

Last year Cyrus wisely reminded us all that Mojon, who developed the Opus X for Harry Winston as well as watches for Hermes, Czapek and Hublot among others, and his movement design business Chronode are often responsible for the brand’s technical output by having him design its biggest hit in years, the Cyrus Klepcys Vertical Skeleton Tourbillon. 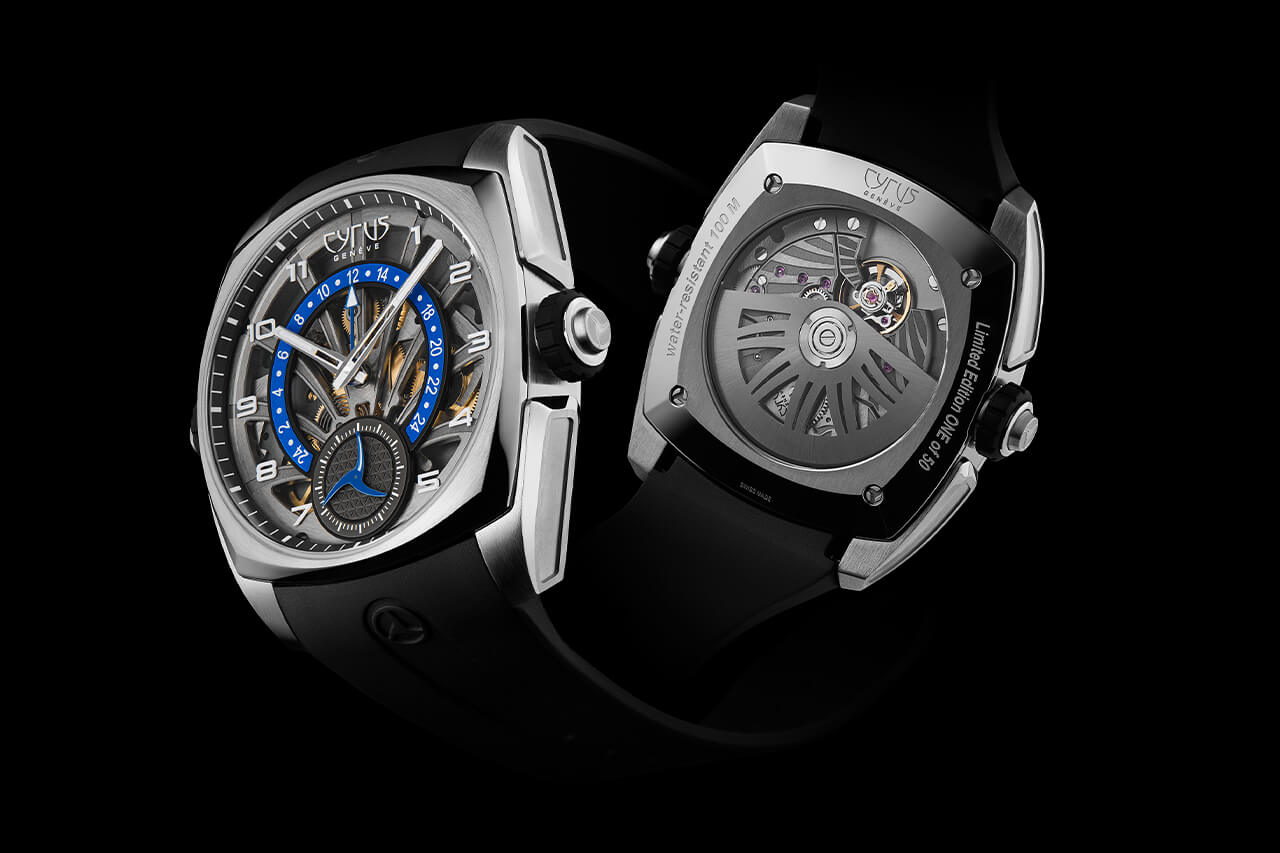 Now, if its latest model is anything to go by, Cyrus would also seem to be addressing its design language, embracing the idea that less is sometimes more.

For the Klepcys GMT Retrograde, the brand’s normally hot colour palette of reds and oranges has been ditched in favour of an altogether cooler and more sophisticated blue. The Klepcys’ twin-crowned cushion case has also been scaled down to 42mm for the first time and it is thinner too (13.9mm, a fact which indicates how large some of Cyrus’ previous watches have been) while Titanium helps keep the weight to a minimum. 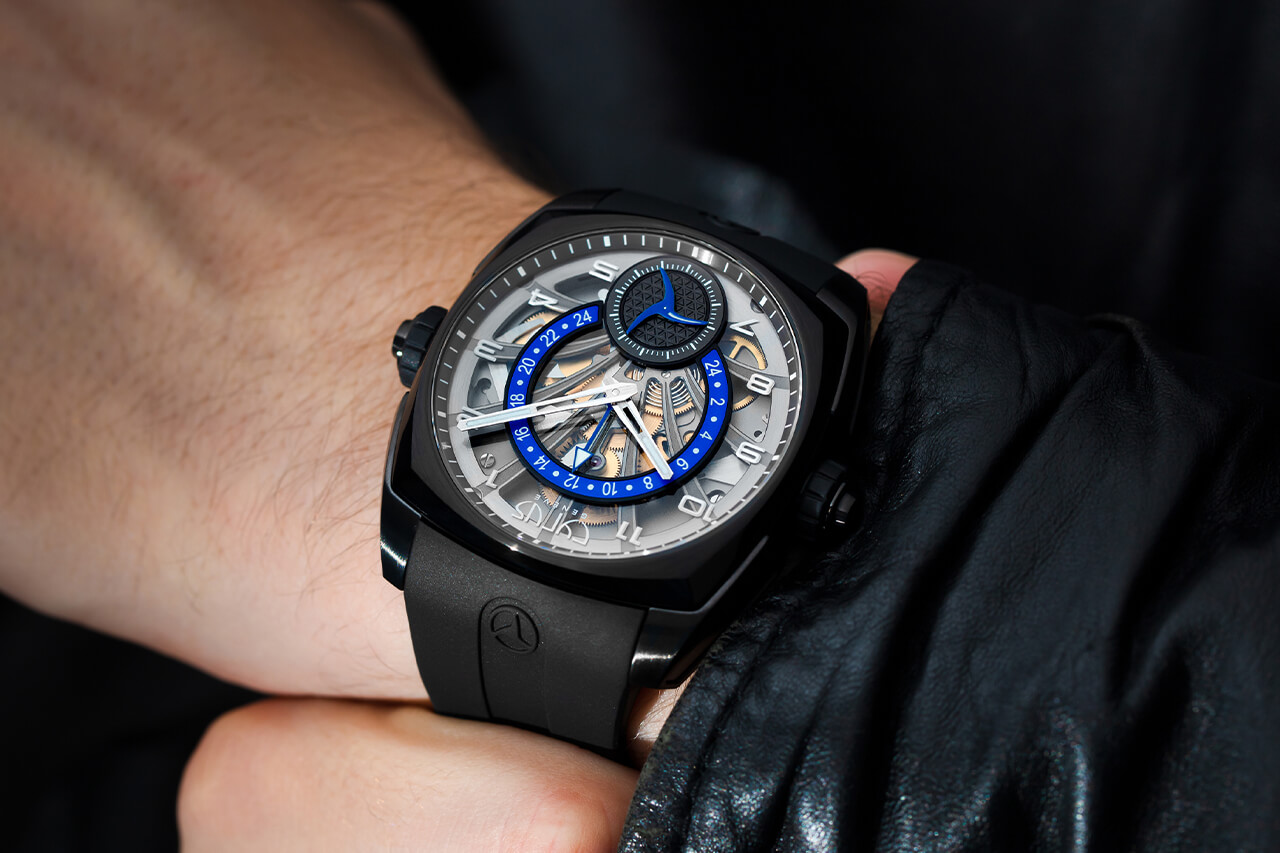 The watch presents hours and minutes centrally with a Small Seconds at the six o’clock and an unusual presentation of the GMT complication.

A scale for the second time zone is marked out on the blue circular lacquered ring, running from the seven o’clock to five o’clock positions, which uses a matching blue arrow as indicator. The scale runs from 24 to 24, with the arrow resetting when it reaches midnight. 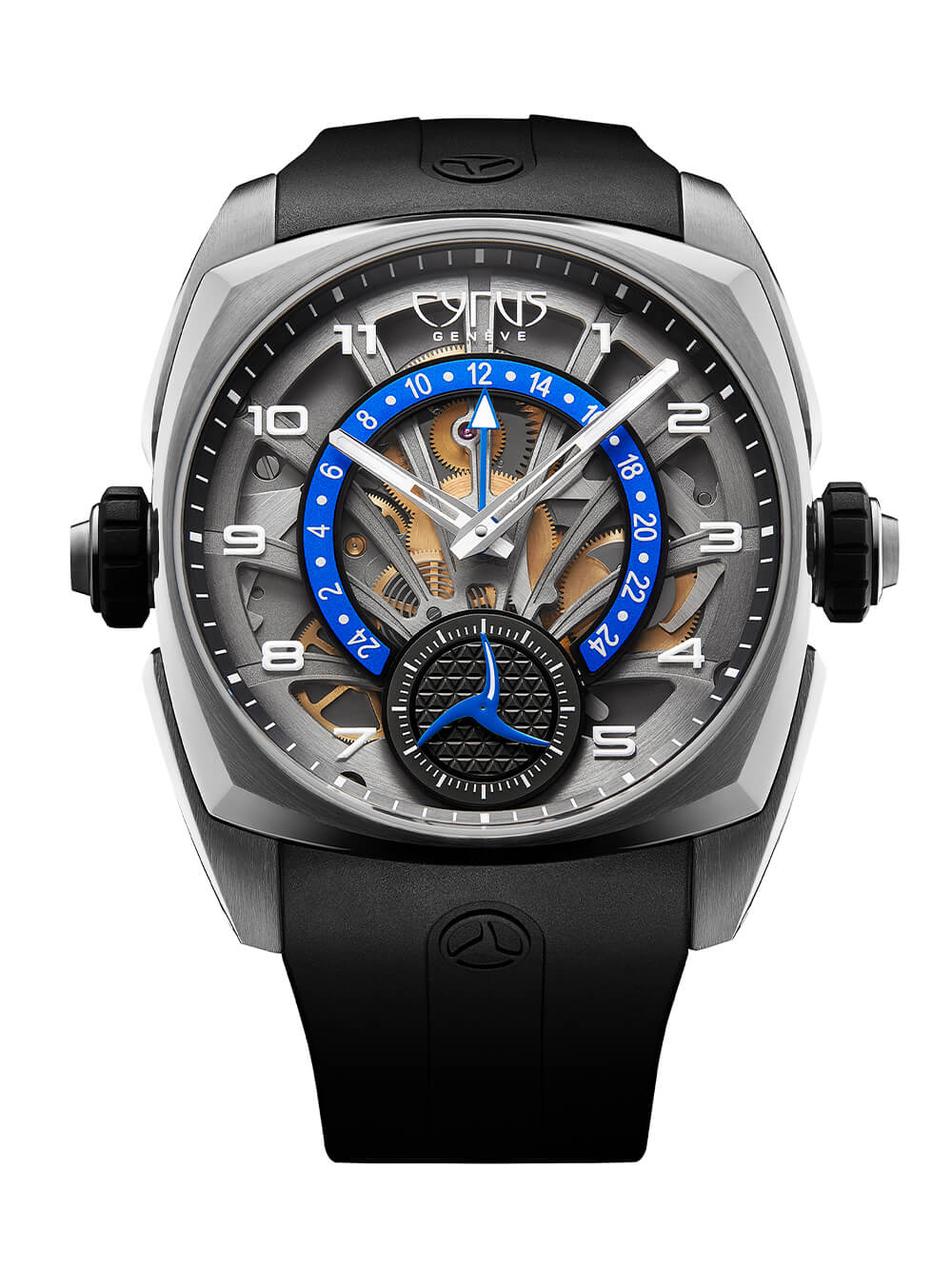 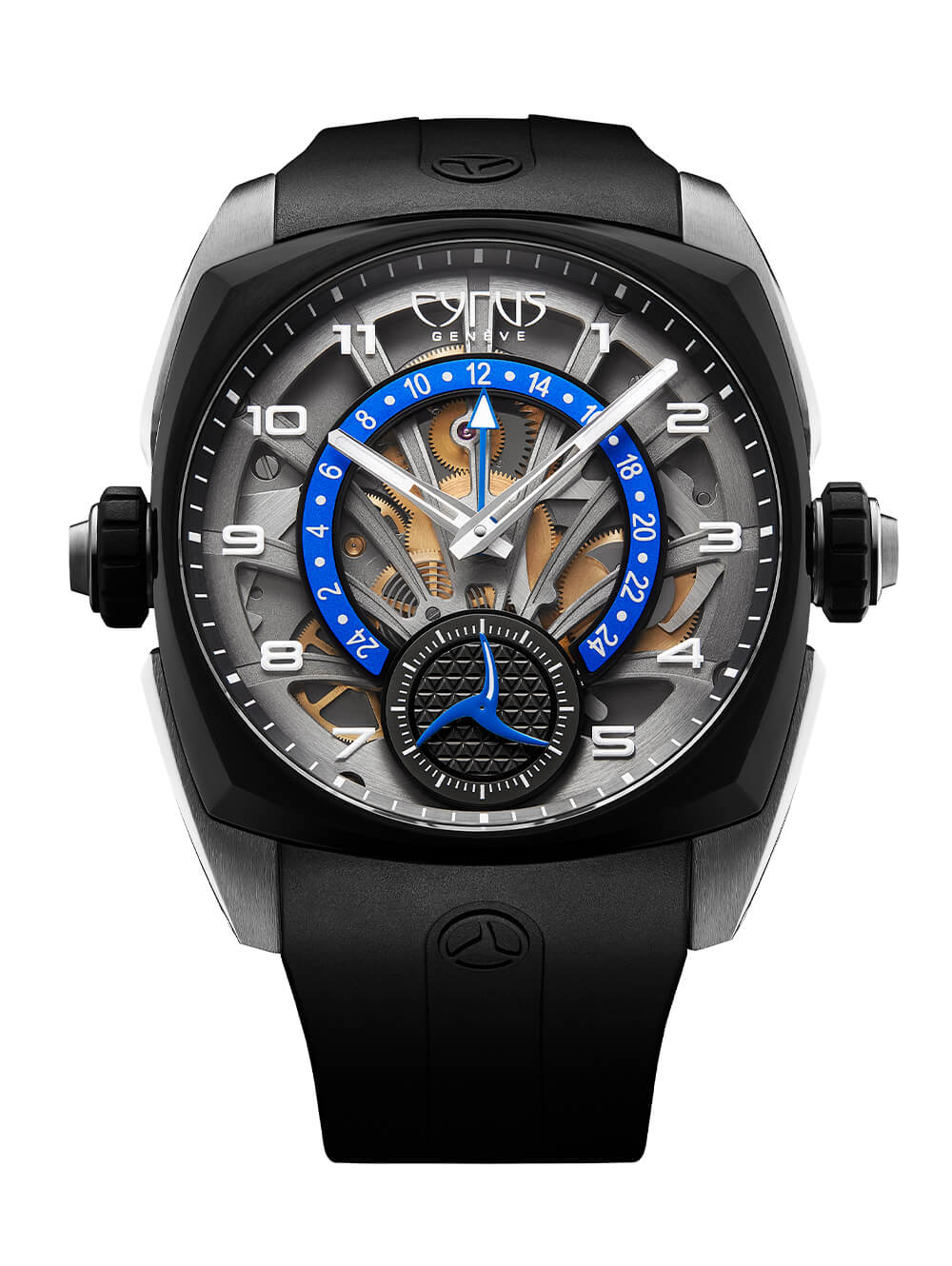 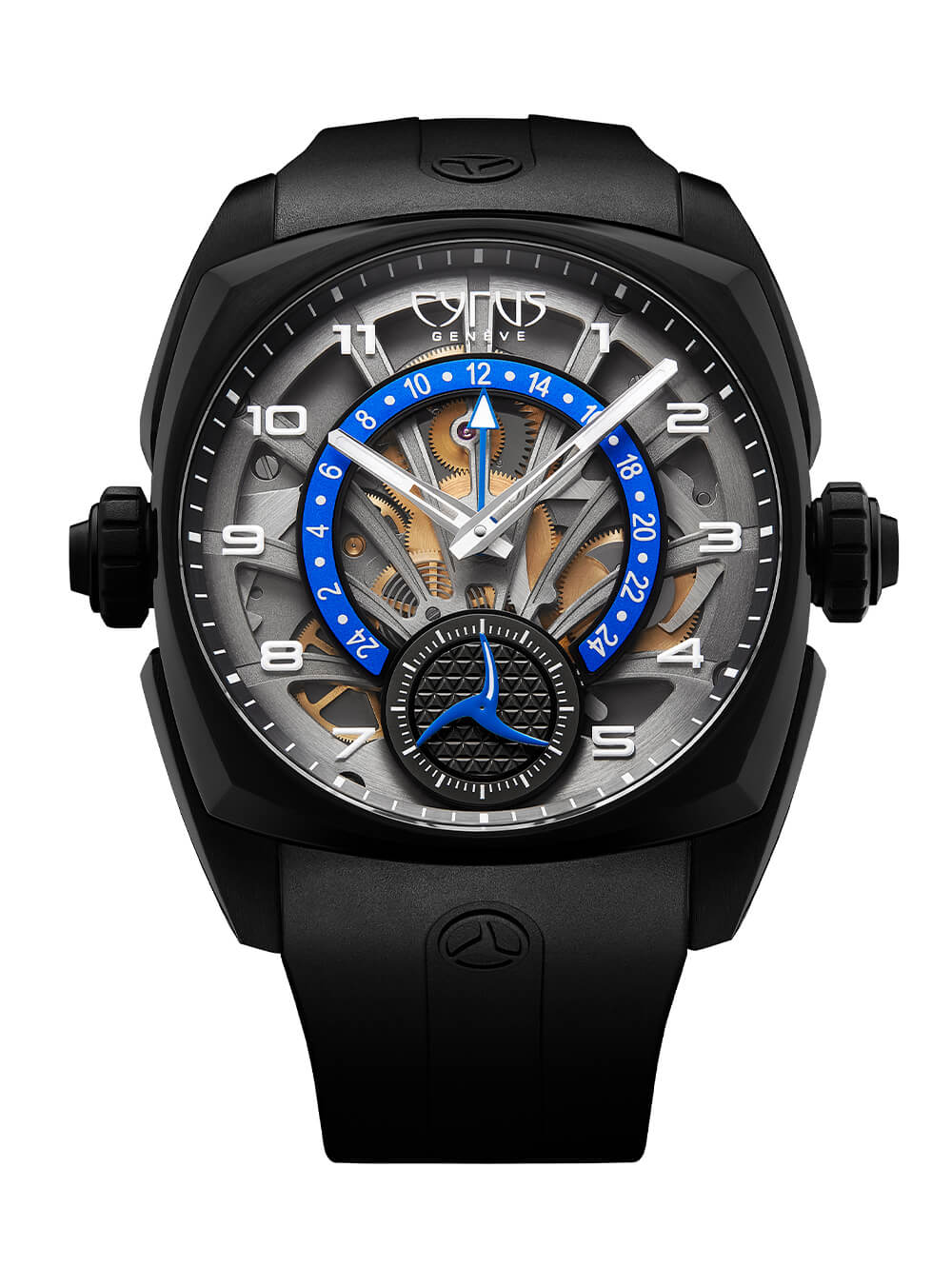 Retrograde GMTs are by no means common, perhaps because the more established methods of presenting the GMT using the existing hour markers or a separate bezel are simpler and more intuitive, but here Cyrus builds the rest of the watch around the complication, making it a central feature. A pusher set into the second crown allows the GMT pointer to advance in one-hour increments without effecting the timekeeping of the main display.

I was also worried that the Small Seconds complication might risk potential confusion as it employs the brand’s three-spoke wheel logo as an indicator, which would make keeping track of the seconds pretty difficult. Thankfully one of the spokes has been emblazoned with what would appear to be Super-LumiNova, so you’ll know which one points the way. 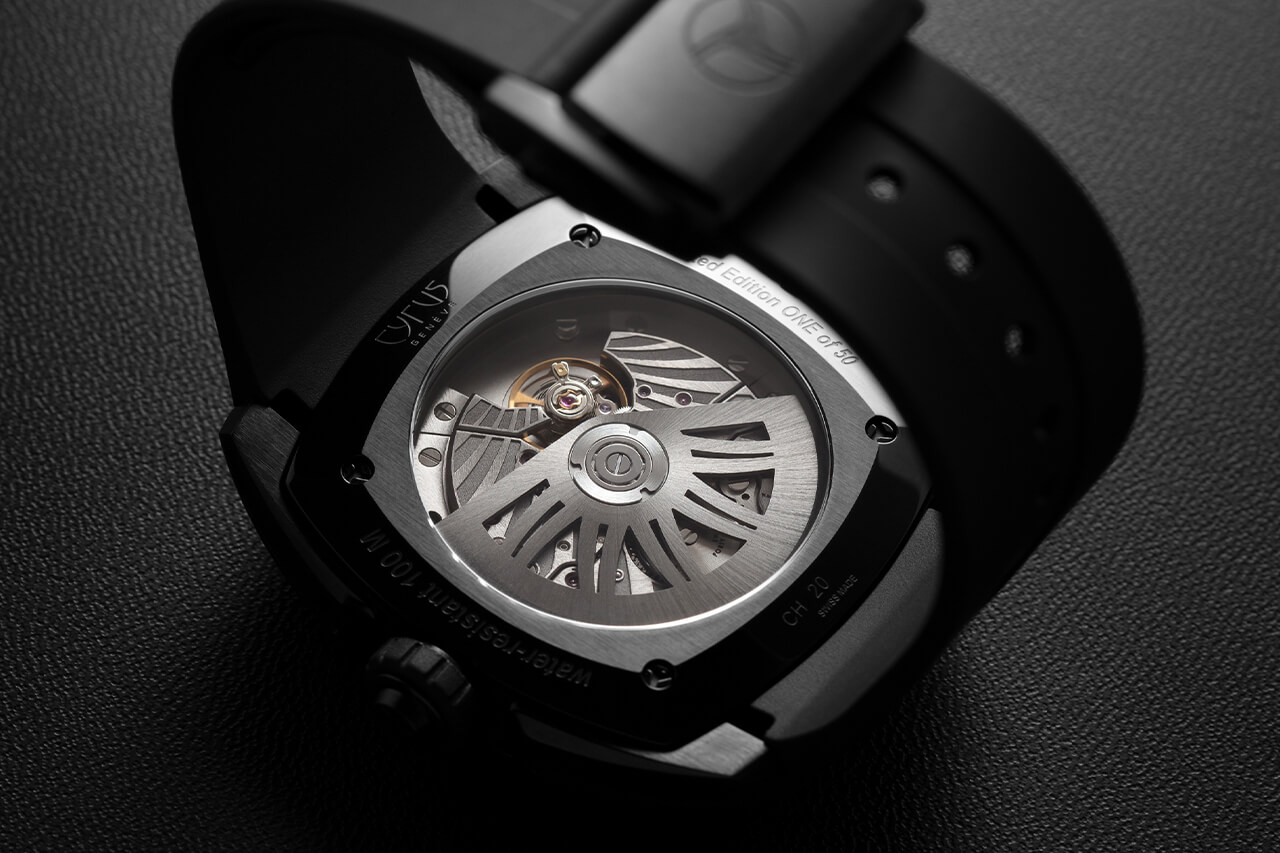 Hopefully this more restrained, dare I say mature, approach to Cyrus’ watch design is the start of a continuing trend, one which will allow Mojon’s watchmaking a better chance to shine through.