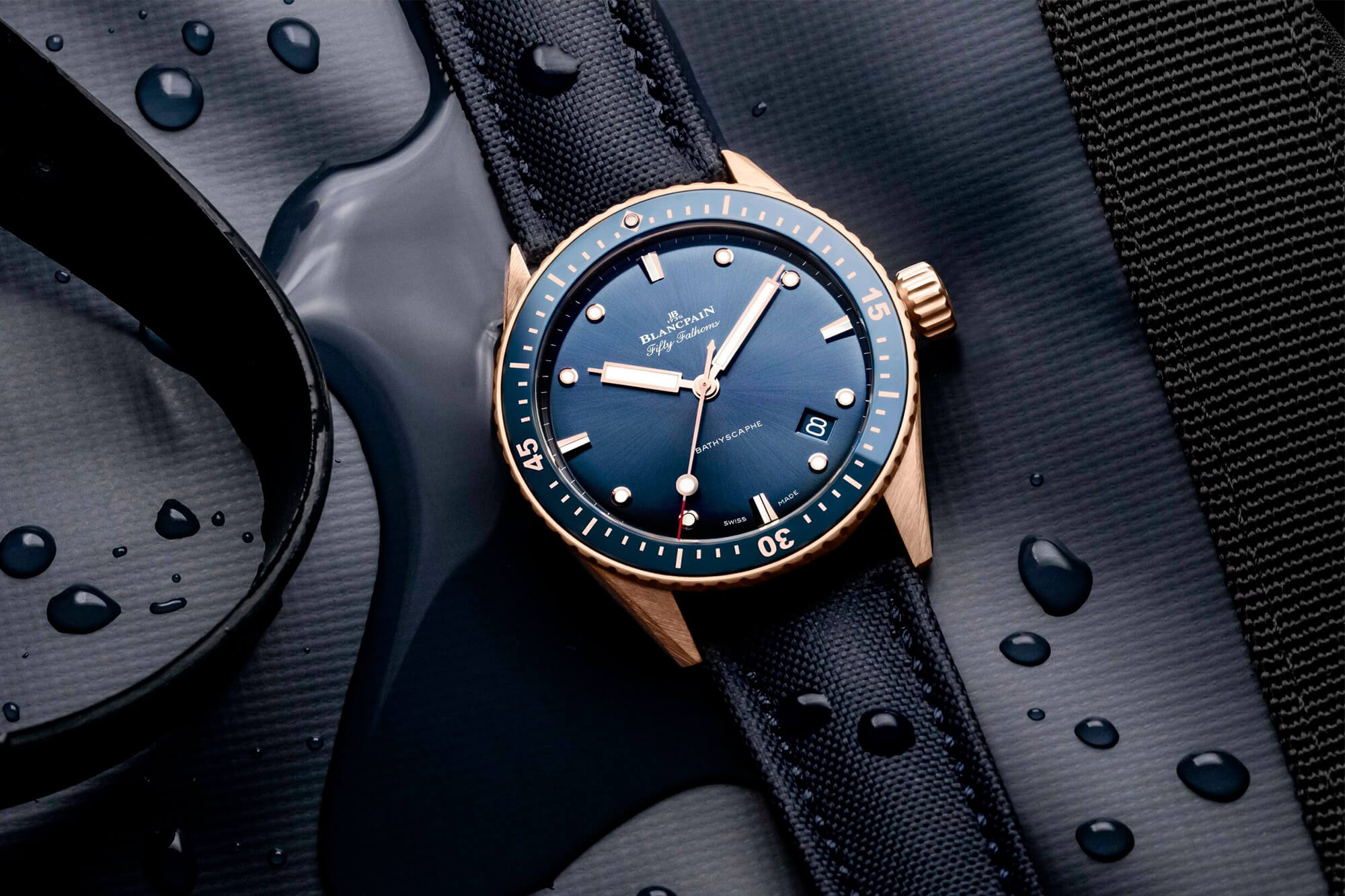 The Bathyscaphe is Blancpain’s answer to that age-old question; is it okay to wear a dive watch with a suit? We all know that it’s not, but many of us do it anyway (I hold my hands up to it) because, let’s face it, many dive watches look so good they are the gateway watch for many people succumbing to this habit of ours and these days dress watches are often a few steps down the road: I doubt too many people have started their watch collection with a Piaget Black Tie.

If the original Fifty-Fathoms is a seasoned salvage diver in search of some mythical haul of doubloons then the Bathyscaphe is his debonair backer, at home on the water but more accustomed to arranging a wire transfer than getting his hands wet.

Adventure novel clichés aside, the Bathyscaphe is a welcome relaxing of the very first professional dive watch and was reintroduced into the brand’s current collection as part of the Fifty Fathoms 60th anniversary celebrations in 2013. 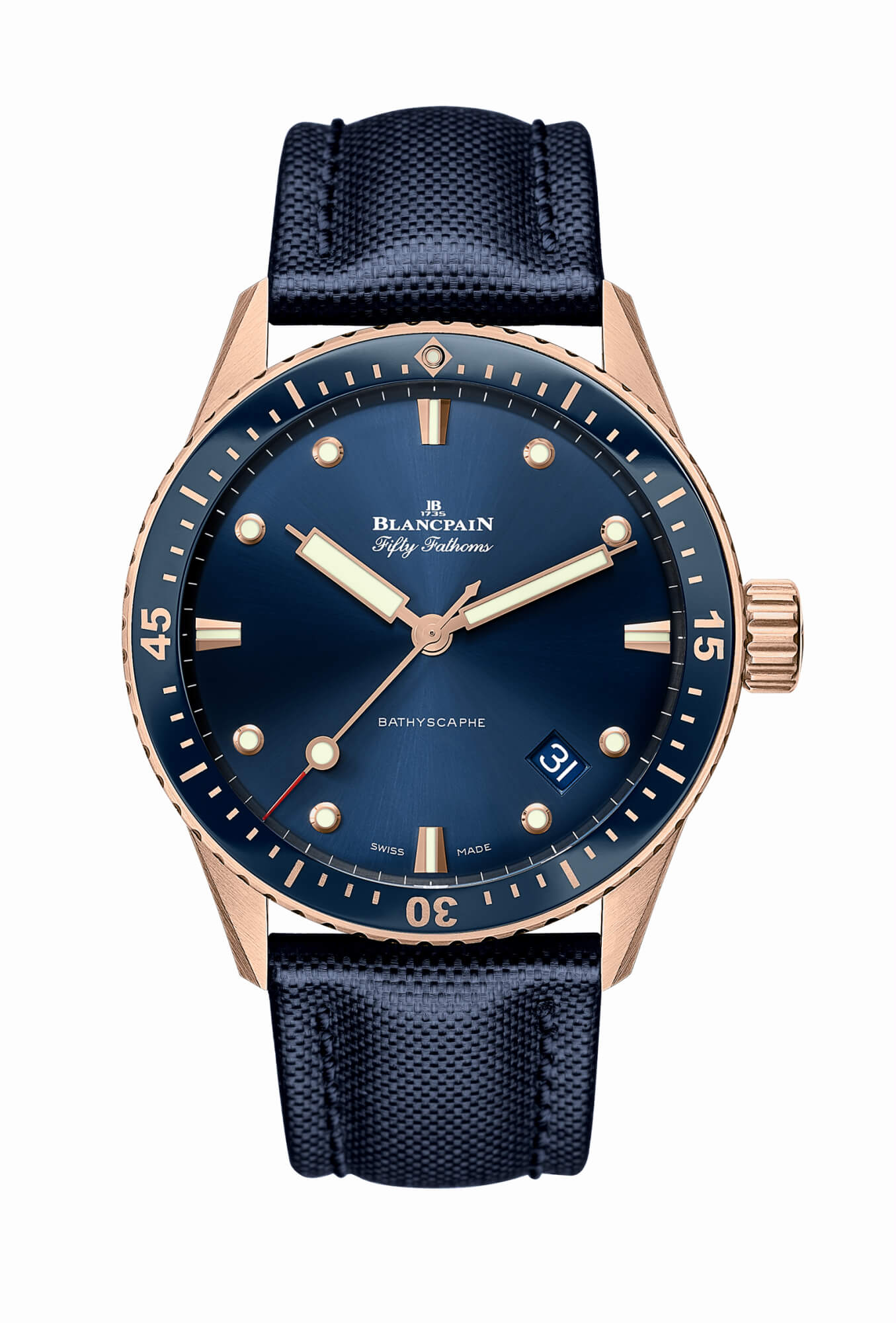 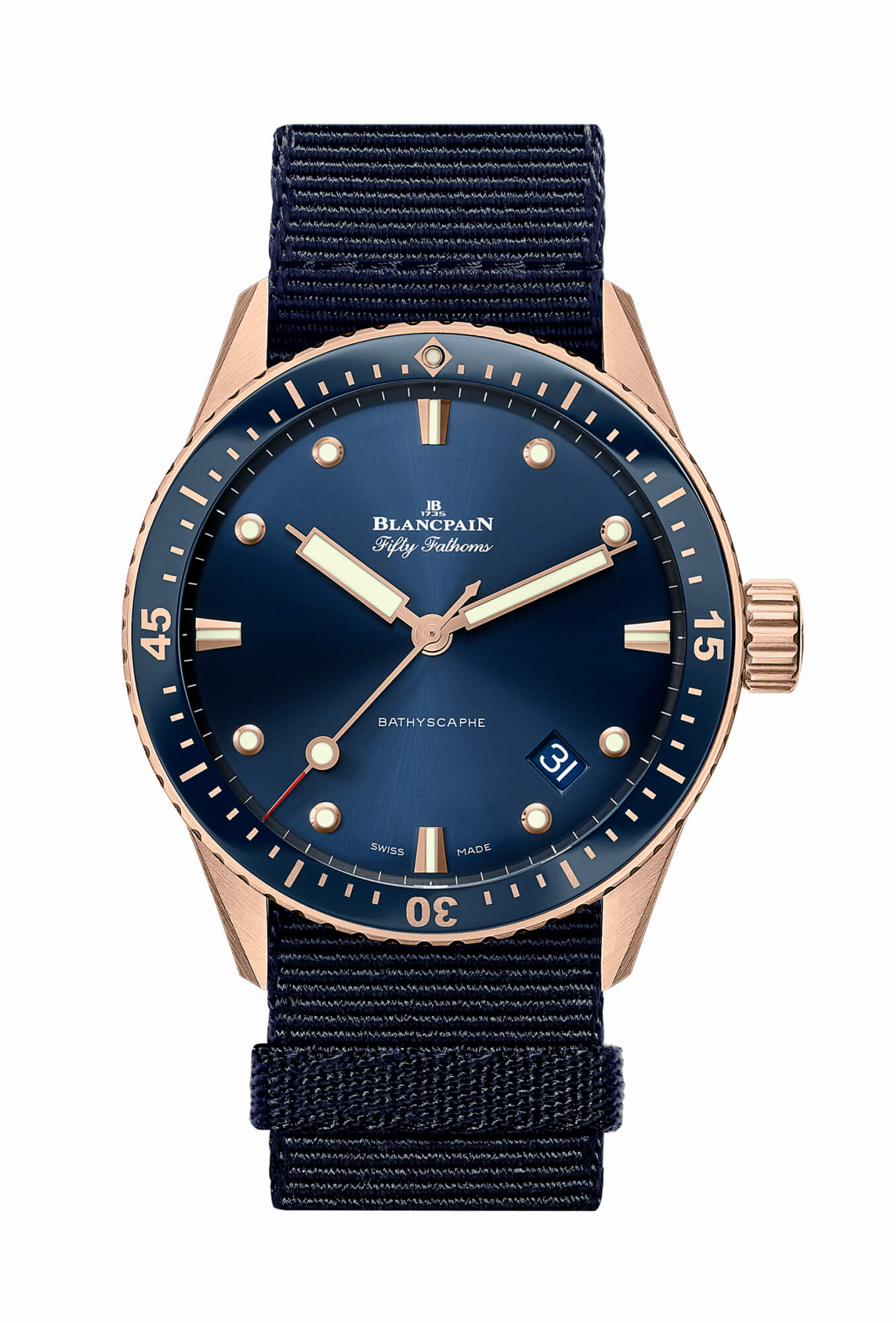 Now, Blancpain has called in a favour from sister-brand Omega (both part of Swatch Group) to be able to encase it in Sedna gold, the Biel brand’s proprietary 18ct red gold alloy in what I *think* is the first case of Omega allowing the metal to be used outside of its own collection.

I’ll be honest I’m more than a little sceptical of the strategy. This is by no means the first evidence of ‘specification creep’ from Omega to Blancpain, the Fifty Fathoms line has already made use of Omega’s Liquidmetal to produce the markings in its ceramic bezels and elsewhere in the group the proliferation of Tissot’s tremendous Powermatic movement has allowed the likes of Hamilton and Certina to offer watches that represent equally phenomenal value. 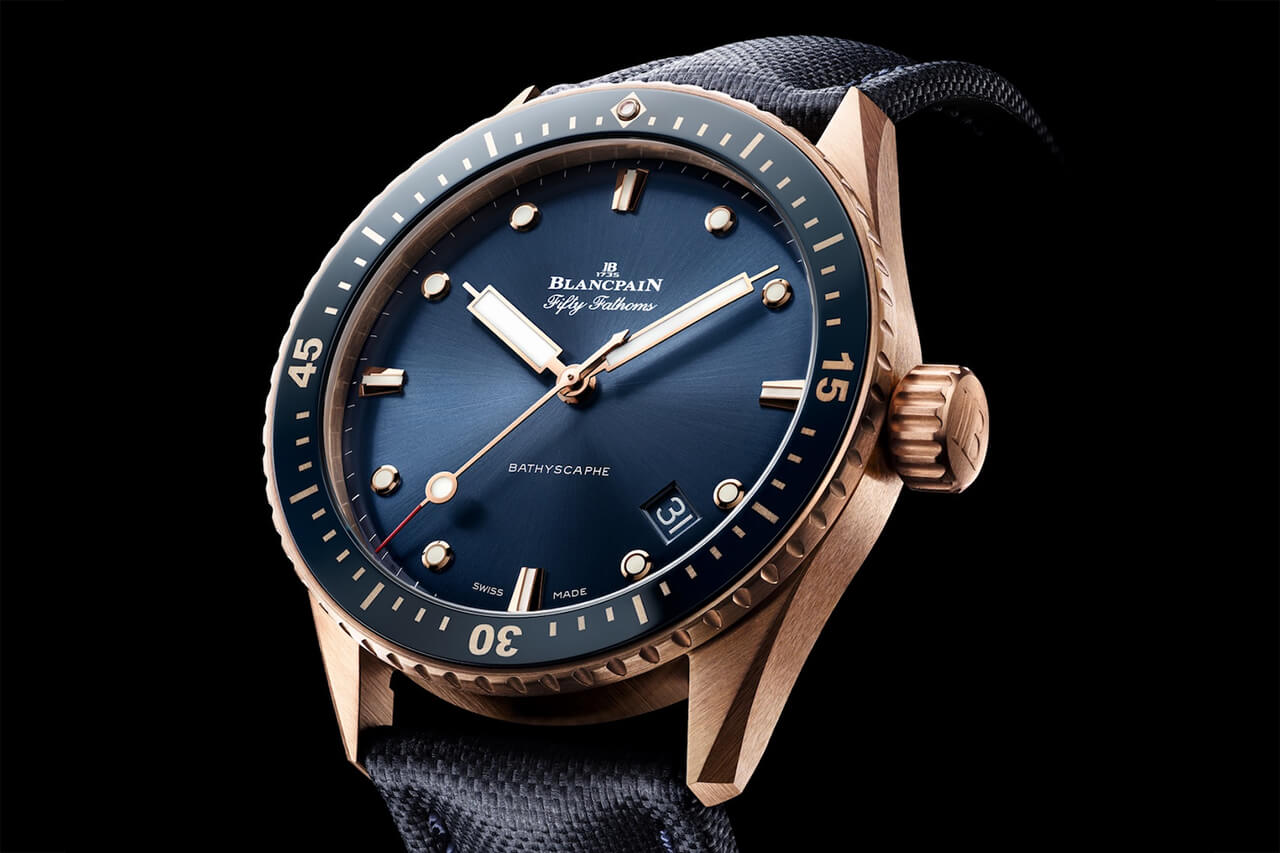 So yes, on paper, having an undeniably smaller stablemate benefit from the advances developed by its bigger brother makes perfect sense commercially and the consumer arguably gets more bang for their buck. Except (and I’m betting against both Omega and Rolex here) I don’t think the end consumer much cares about trademarked alloys with fancy names, unless they offer a practical benefit such the scratch-resistance offered by Rolex’s Oystersteel and Hublot’s Magic Gold.

But back to the watch itself and there’s no denying the red gold tones its 43mm Sedna gold case and the deep blue hue of its sunray-brushed dial make for a handsome pairing, even if the colour-matched date window would look much better at six o’clock than residing, as it does, somewhat indecisively at half past four. 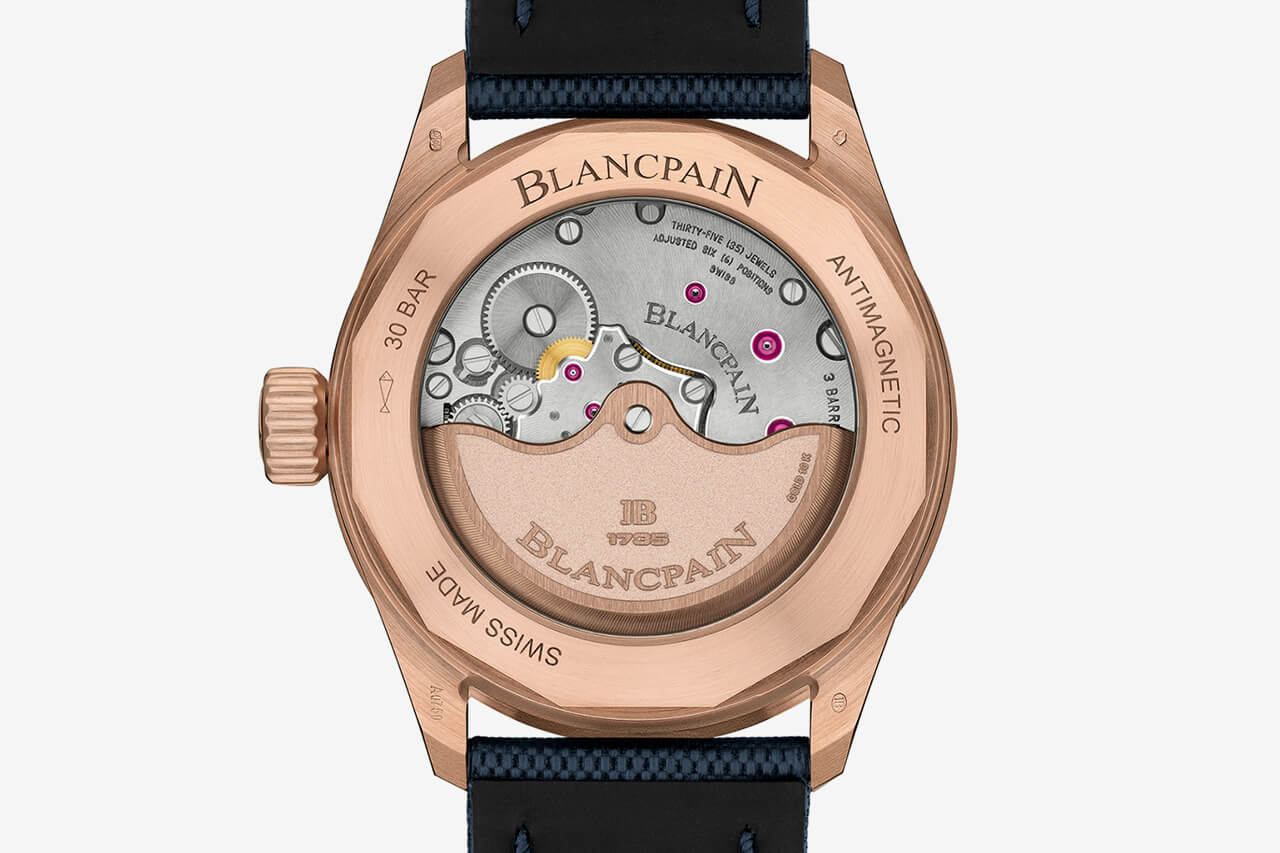 The unidirectional bezel is also made of the Sedna gold and another Omega technology, Ceragold, is employed to make sure the same metal is used for the numerals and markers embedded in its ceramic insert. Beating at 4hz, the automatic Calibre 1315 inside uses a silicon balance wheel and three series-coupled mainspring barrels to offer a power reserve of Five Days or 120 hours. A sapphire crystal caseback also permits a view the movement and its Sedna gold rotor and watch is water resistant to 300m.