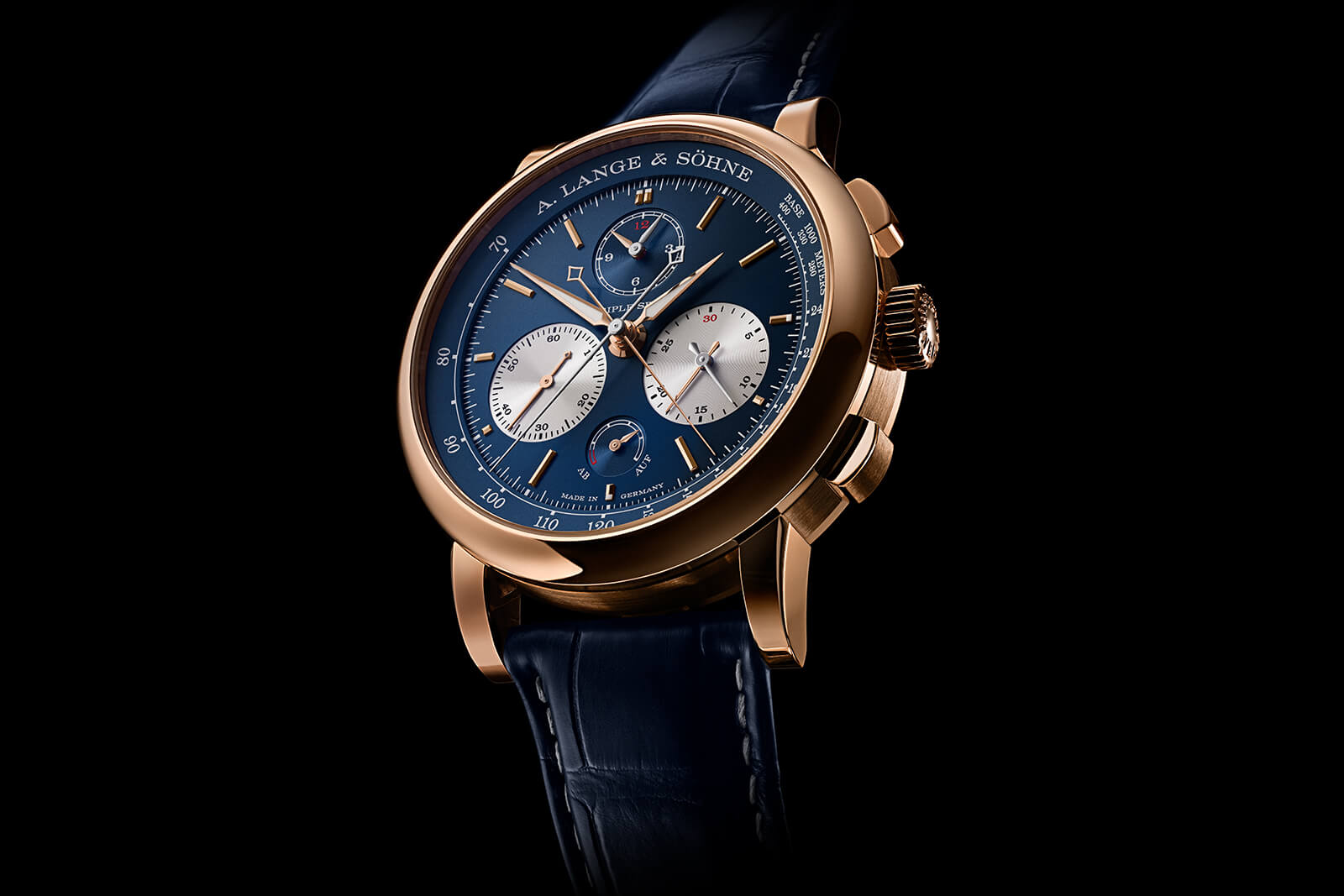 A rattrapante sits alongside a perpetual calendar and chiming sonneries in the triumvirate of grand complications, the three functions hardest to create in the world of watchmaking. The concept however isn’t that hard to explain: it’s a chronograph, the second hand of which can split into two, one marking the place the split button was pressed, the other continuing until its pressed again.

It takes the short spaces of time that a chronograph is best at keeping track of and allows it to track multiple events concurrently. The only problem in most split-seconds chronographs is just that: it only times seconds.

Enter Glashutte’s eminent A. Lange & Söhne who back in 2004 created the Double Split, a watch that could split times that eked up into the minutes. Then in 2018 they outdid themselves with the Triple Split, adding hours to the complication. 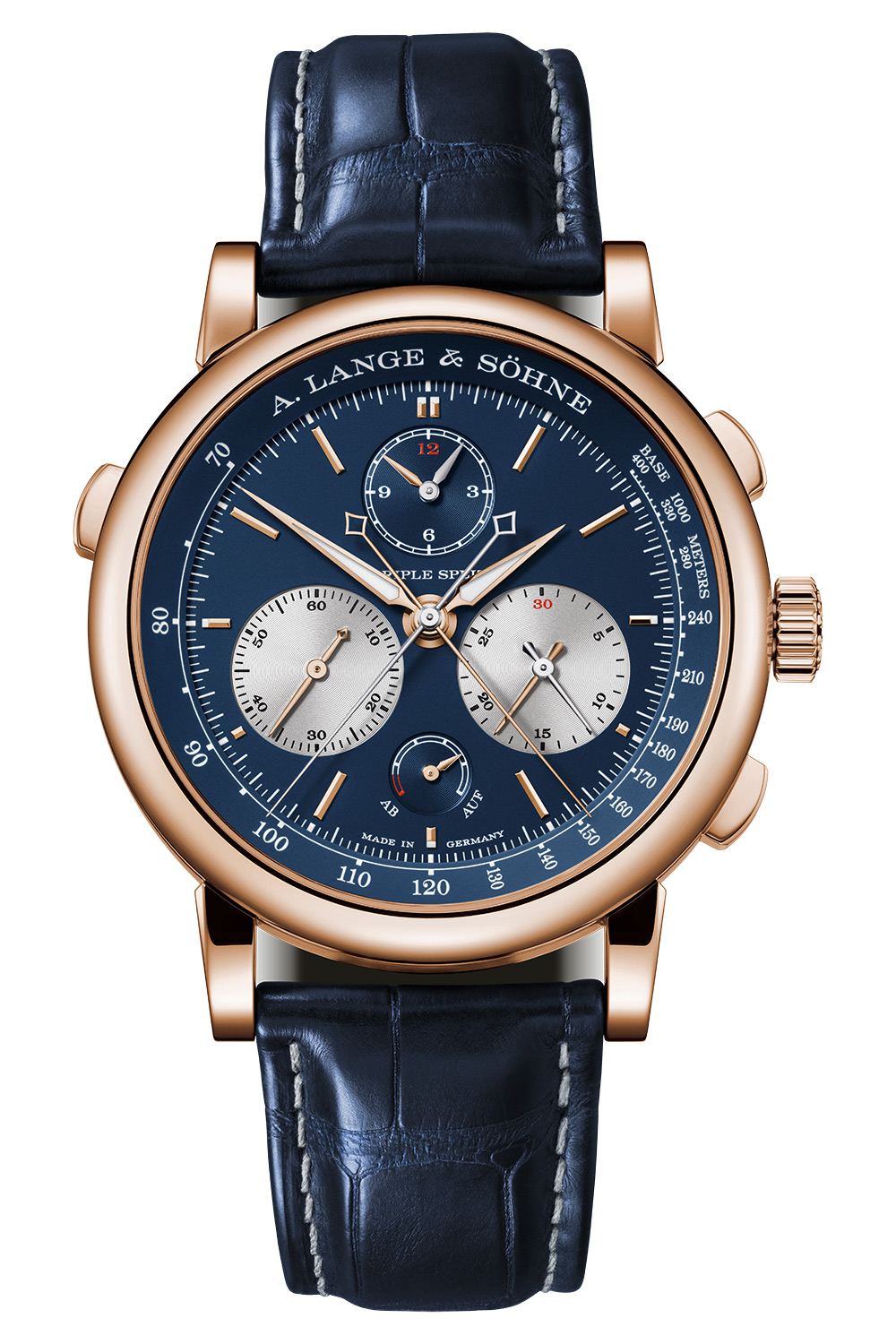 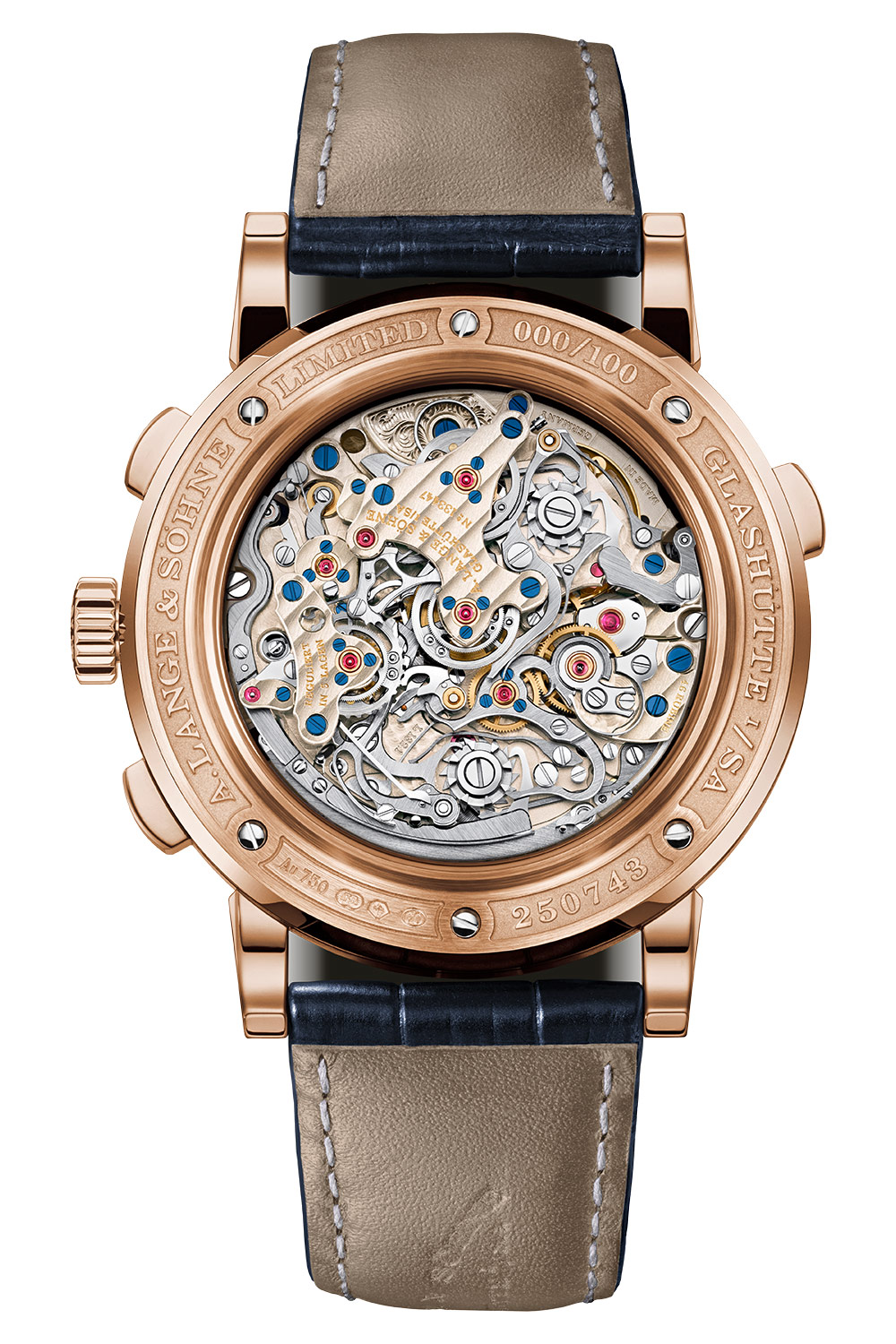 This year… no, it’s not a Quadruple Split. At least until there’s some reason to use a chronograph over the course of days. Instead, for Watches & Wonders Lange & Söhne is offering an overdue return of the Triple Split in a new colour.

The new Triple Split offers a much more luxurious take on the complication, with a 43.2mm rose gold case paired with a deep blue dial – not quite royal, not quite navy – and rhodié-coloured (silver) subdials. Case-matched indexes and hands offer a touch more contrast than the grey-on-silver of the original and key elements are highlighted in bright red. 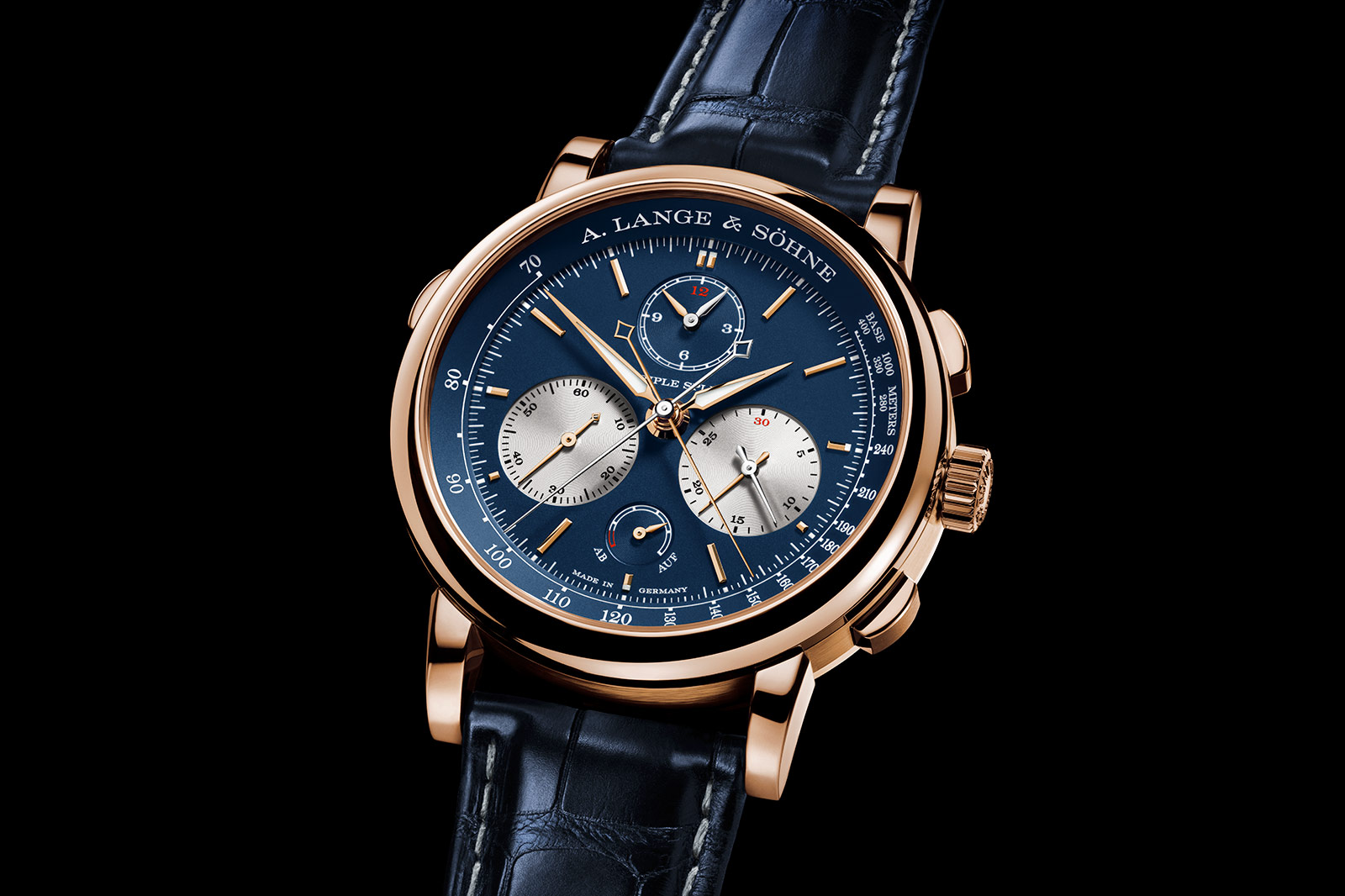 Honestly, I prefer the tone-on-tone look of the original – it just felt a bit more Lange to me – but this version definitely gives the complication the fanfare it deserves. If someone strapped it to my wrist I definitely wouldn’t complain. Hell, I’d probably marry them.

The twin silver subdials are a split 30-minute counter at 4 o’clock and running seconds at 8 o’clock, with a blue split 12-hour dial at 12 o’clock. The split-seconds remains like the vast majority of chronograph functions at the centre along with running hours and minutes for easier reading, finished with a power reserve indicator at 6 o’clock inscribed with the German for ‘UP and DOWN.’ 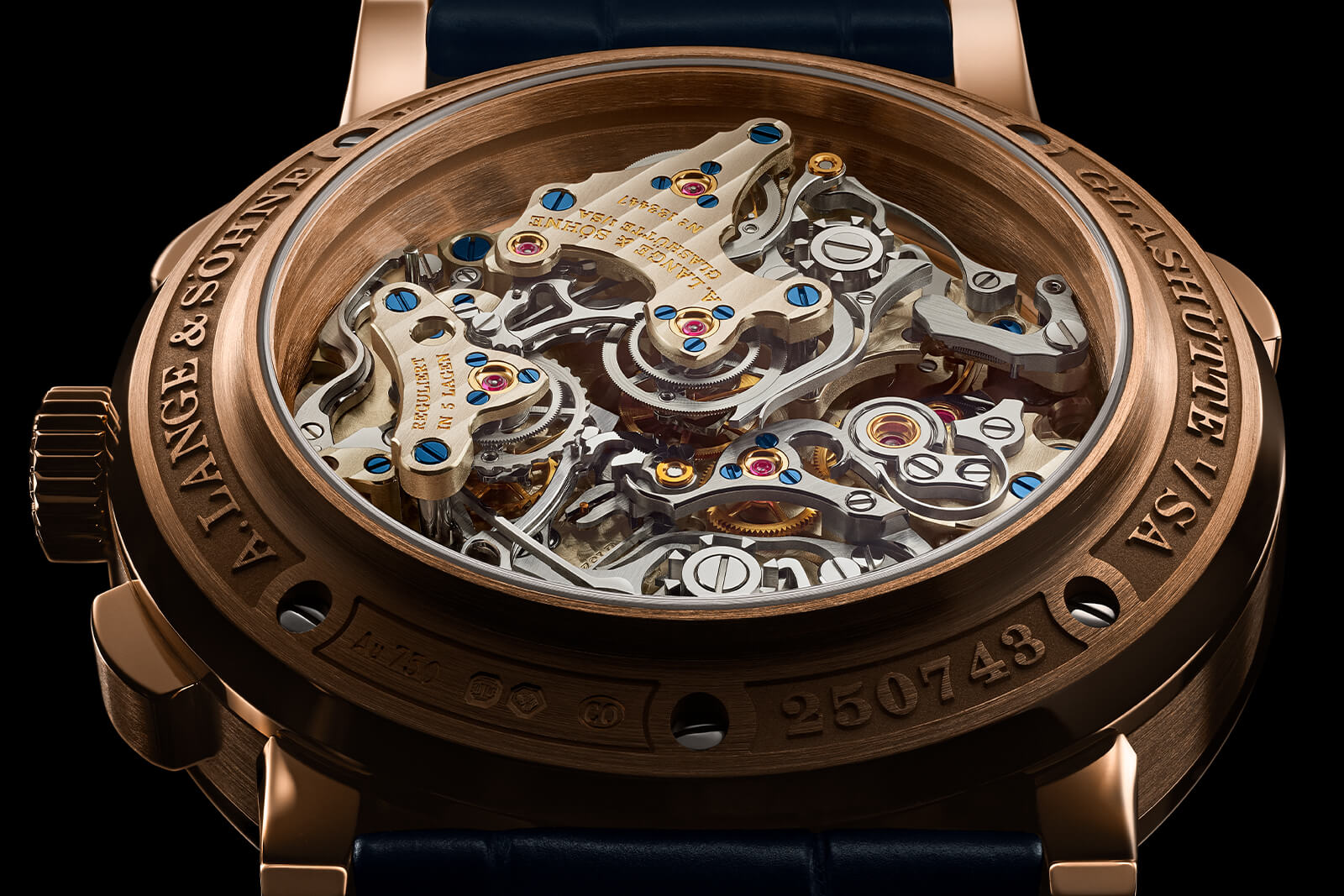 If you’re wondering why Lange would do this, there are two reasons. The first is because they, unlike most watchmakers can. The other is that it makes the classical rattrapante a lot more useful. You can still time sub-1m F1 laps, but you can do the same with legs of the Tour de France, eking into the hours. Part flex, useful function, all Lange & Söhne.

All of that will be familiar to anyone that bought the first one, but given that they only built 100 of them, that’s fewer collectors than it should be. This version not only offers a new opportunity to get your hands on this tour de force of split-second timekeeping, but does so in a handsome new look.

Now, about that Quadruple Split, Lange…