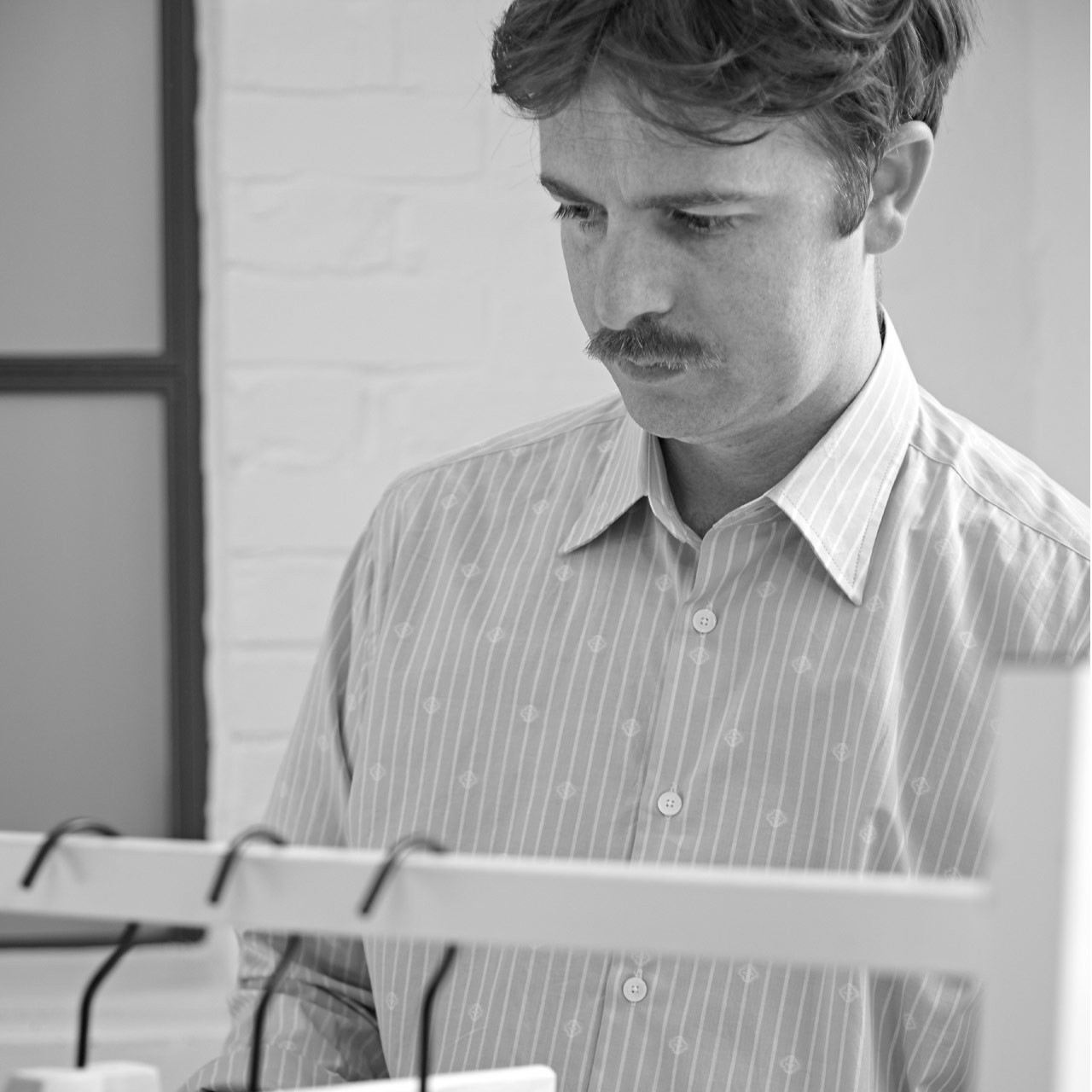 Duchamp’s new Head of Design Mark Frost tells us about how he takes inspiration from the French artist namesake of this famous British luxury menswear brand. It’s relatively common for art to spark the creative minds of the fashion world, but rarely is the connection between label and artist so explicit as at Duchamp.

Founded in 1989 by Mitchell Jacobs, a former buyer at Browns department store in London, the British label was named after the famed French conceptual artist Marcel Duchamp as a way to forever tie (no pun intended) his philosophy into the way the brand approached design. Just over 30 years after the brand was established, Mark Frost is inheriting this legacy as the brand’s newly-anointed Head of Design.

“There’s a quote that Jacobs said while he was running the brand: ‘Duchamp turned everyday objects into art and I turned everyday icons of men’s fashion into wearable art’,” says Frost as I speak to him about his new role over coffee at Mortimer House in London. “I want to continue that legacy. For me, the purpose of art is to capture your attention in the moment, or make you feel something – and that’s what I want this label to do. I want there to be something unexpected.” 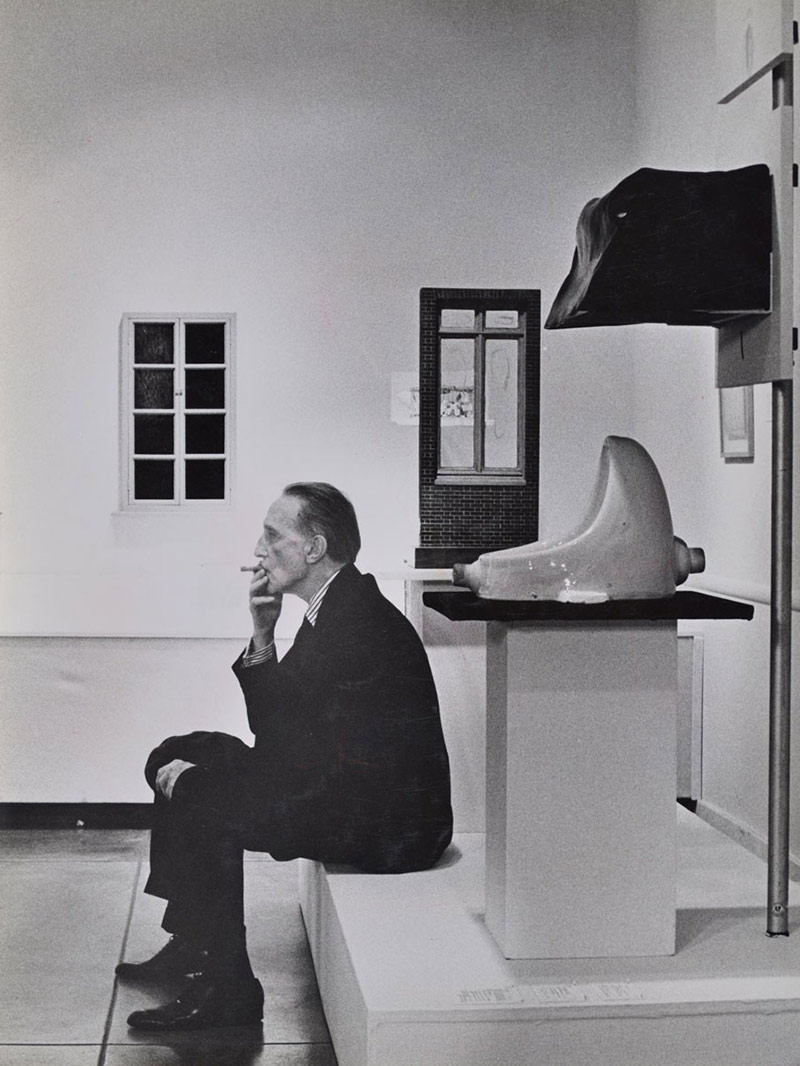 Marcel Duchamp was a French painter, sculptor, chess player, and writer famed for his Cubism, Dada, and conceptual art.

Of course, this is the driving principle that gave Duchamp the kind of grip on the men’s accessories market that competitors could only dream about in the 1990s. Founded at the tail-end of the banking boom, Duchamp’s wildy colourful socks, graphic ties, and conceptually-shaped cufflinks made it the go-to brand for City boys looking to funk-up their straight-laced two-piece suits. Of course, this transitioned nicely into the pocket-square-and-skinny-suit obsessed generation of menswear dandies that emerged in the mid-2000s – something that no doubt encouraged the brand to branch out into a full tailoring line in 2013. However, as the suit and its necessary accoutrements fell out of favour not just with the fashion- conscious younger crowd, but also in offices across the world, Duchamp London faltered.

That was until new owners revived the brand in May last year, placing Frost at the helm – a designer who cut his teeth in the studio at Tom Ford before heading up the creative direction at Gieves & Hawkes, and most recently, the David Beckham-backed menswear label Kent & Curwen. The challenges for him at Duchamp aren’t entirely dissimilar to the ones in those precious roles: take a brand with a distinct heritage (Savile Row suiting and traditional British sporting pursuits, respectively) and make that relevant for a new generation. And the evidence in his debut collection for the label is that he’s doing just that.

“We were putting this collection together as we came out of the worst of the pandemic and that desire to travel, to see new things just felt impossible to ignore,” says Frost of the line; Duchamp’s first in two years. “We kind of looked at this idea of nostalgia, the nostalgia of holidays and the things that you see on holiday.” Handled with Frost’s signature softly-softly approach, the result is a collection of apparel and accessories that takes patterns and colour seriously (this is Duchamp after all) but doesn’t hit you over the head with them.

The result? Louche, camp collar linen shirts with delicate tile prints or blue and white brush-stroke stripes (reminiscent of an artist painting the detail into a deckchair); a Breton shirt embellished with a pop of yolky yellow; swim shorts in shades of coral and cobalt blue. Other clothing in the collection is relatively restrained in its palette (a taupe suit here, a navy harington there), becoming the canvas for the more vivid centrepiece elements of the collection. 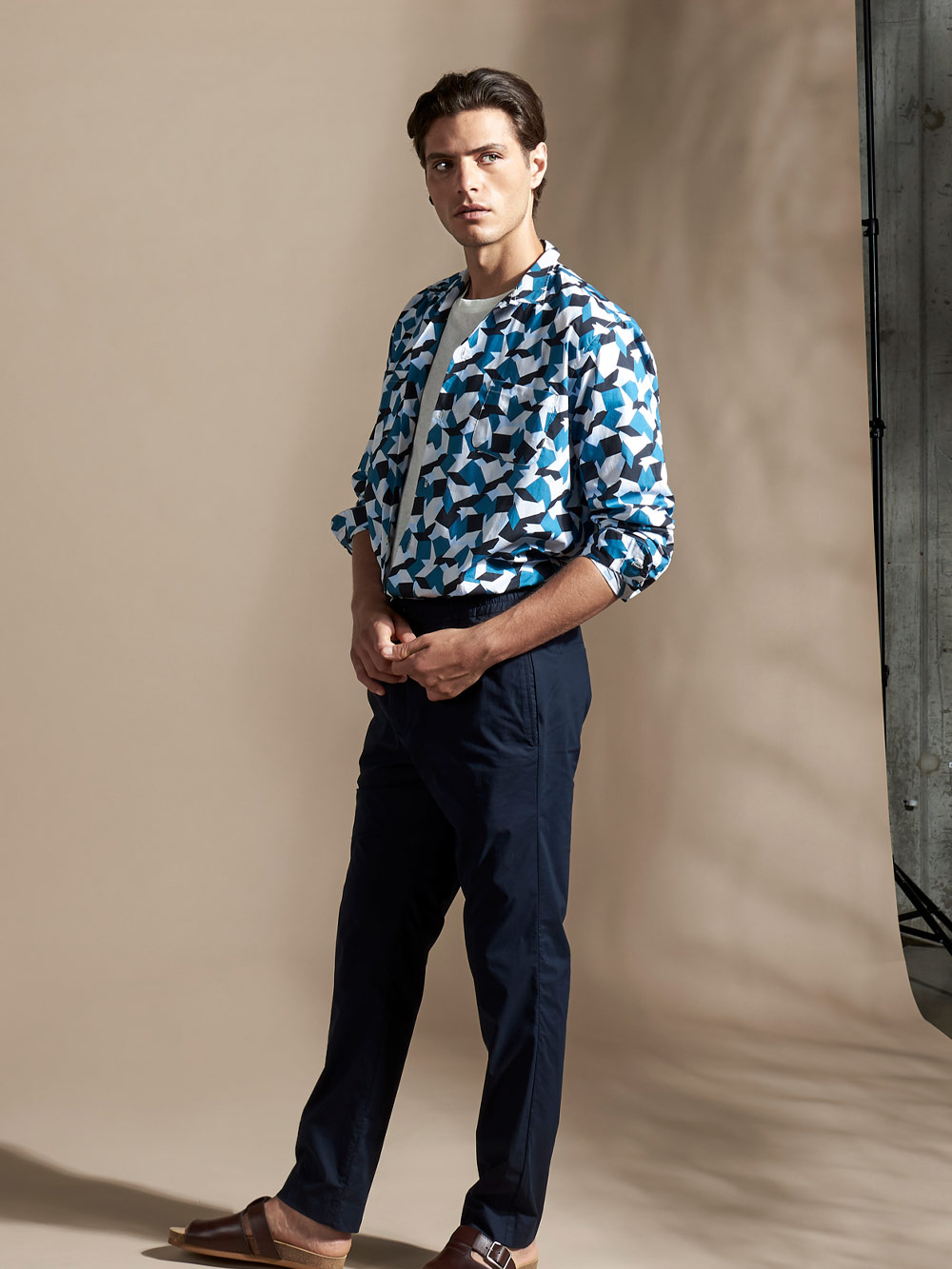 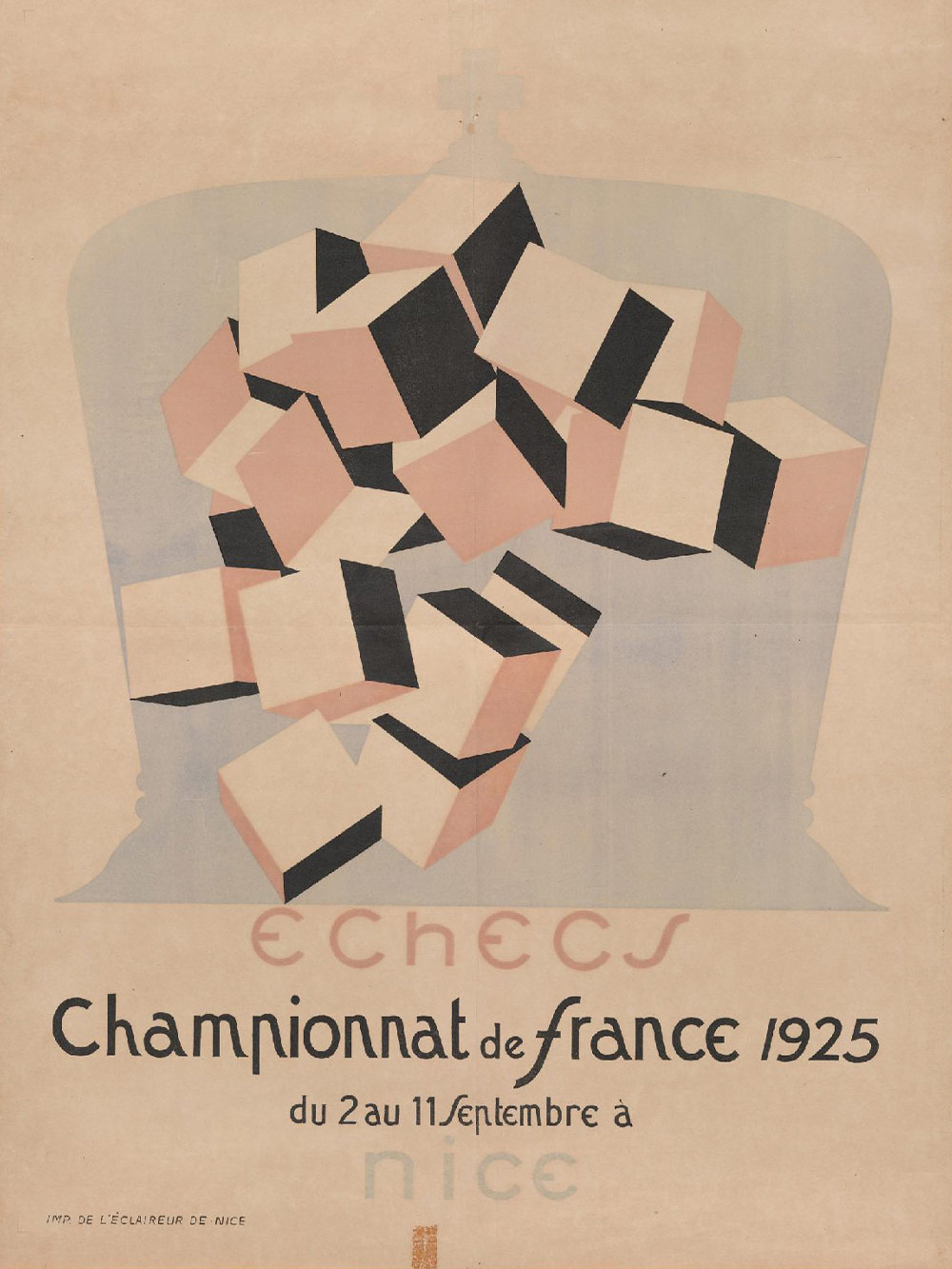 Poster for the Third French Chess Championship by Marcel Duchamp (Nice, September 2 to 11, 1925)

One pattern in particular catches my eye: a delightfully avant-garde collection of 3-D squares jostling for attention in shades of orange, blue, and black that features on shorts and shirts alike. This pattern, Frost tells me, is inspired by a chess poster designed by Marcel Duchamp for a French chess tournament in 1925. The artist’s love of the game of kings (“He seemed to be more interested in chess than he was in painting or sculpting towards the end of his life,” says Frost) is also seen on the designer’s first drop of ties and accessories for the collection with a repeating pawn print cropping up on designs.

Perhaps the most surprising item in the collection is a sweatshirt with a seventies-style collar, intricate stitch detailing and a quarter zip cut from vanilla-white Terry cloth – eye-catching for, well, just how un-Duchamp it is. In fact, the only real nod to the Duchamp of days-gone-by is so small you might just miss it: take a closer look at the metal zip-pull and you’ll notice it’s in the shape of a small tie (a small nod to the brand’s eccentricity that made me smile when I discovered it).

However, if this is a brand that made its name offering men an eye-boggling selection of jazzy patterns and colours, then this piece is quite possibly the biggest statement Frost can make as the driving force of the brand. And why shouldn’t he? Men have changed how they dress since the brand was founded, rarely wearing ties or cufflinks on a daily basis and increasingly not having wardrobes delineated into strict work and play sections. Duchamp needs to reflect that, of course, but does the idea of taking a brand primarily known for office accessories and translating it to the remote working, Casual Friday era not feel like a gargantuan challenge for Frost? 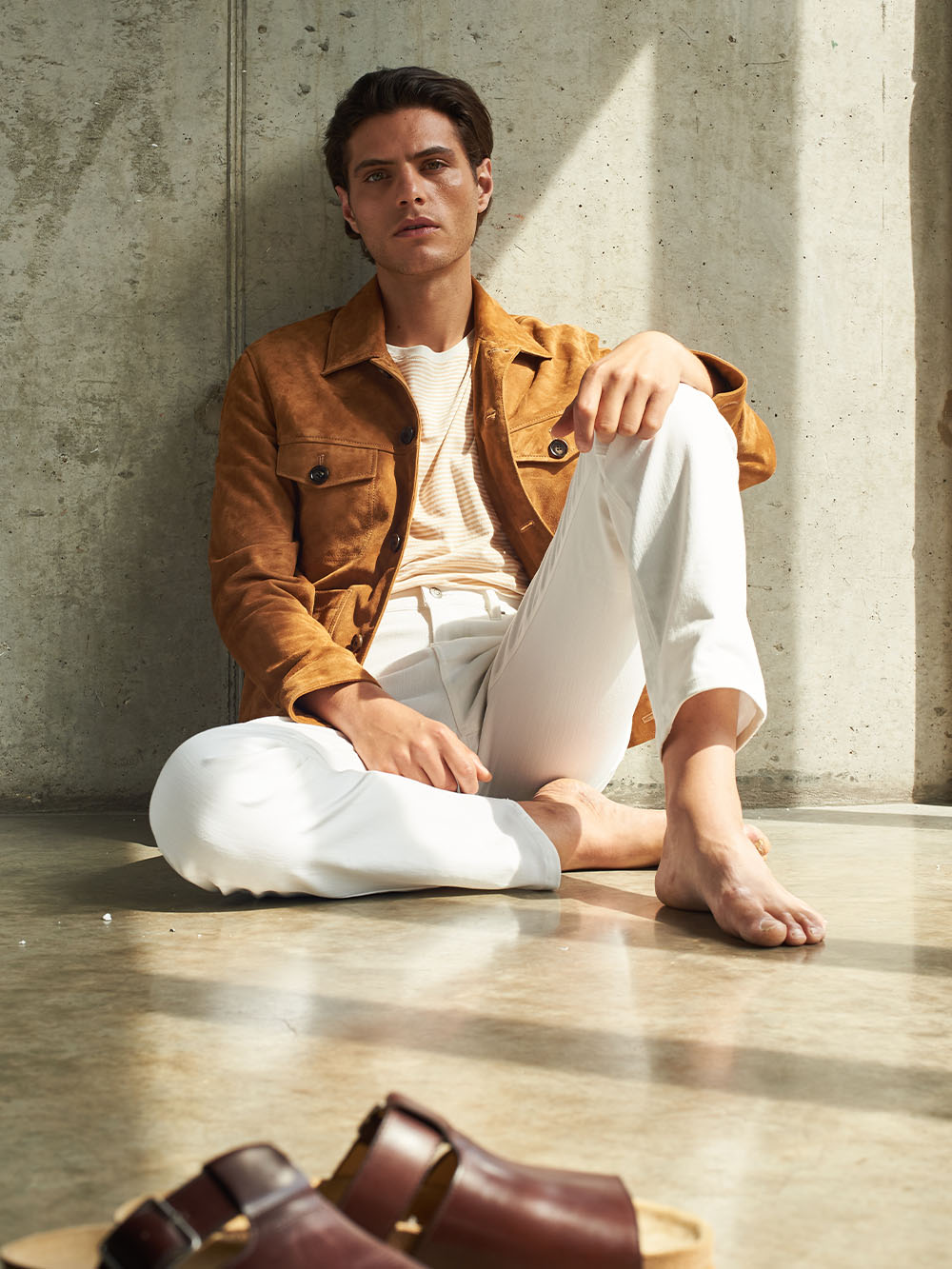 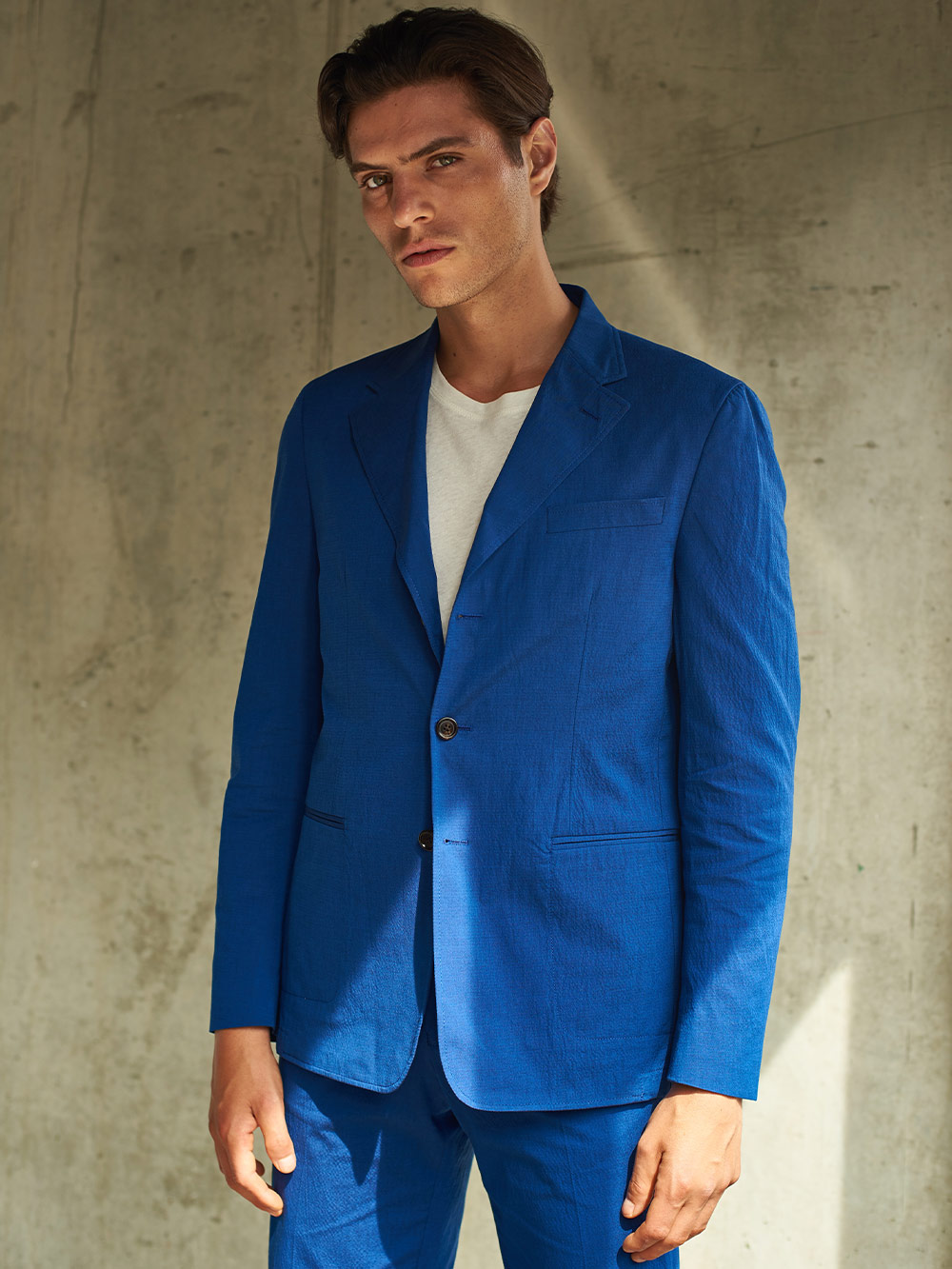 “Men might feel that they don’t have to wear ties or cufflinks now, but that means that those who wear them do so because they really want to,” says Frost. “Or maybe there’s now a different customer for Duchamp entirely – someone who wants to wear a T-shirt or a hoodie with a neckerchief, for example.”

While this first resort collection sets Frost’s vision for the brand, it will be the second collection (which drops this month) that is set to really showcase its full potential. Understandably, he’s keeping it under wraps at the time we speak, but he gives me a little hint at what’s to come. “I’ve been thinking a lot about contradictions – day and night, hard and soft, tactile and rough. Technique will be a very important part of the collections moving forward, so you’ll see Jacquard knitwear, for example, next season. Ultimately, I hope that both people who know the brand and people who don’t will be surprised.”

For a label named after an artist whose work changed the way people thought about what art could be forever in the early 21st century, Frost’s ambition for Duchamp just over 100 years later feels particularly apt.