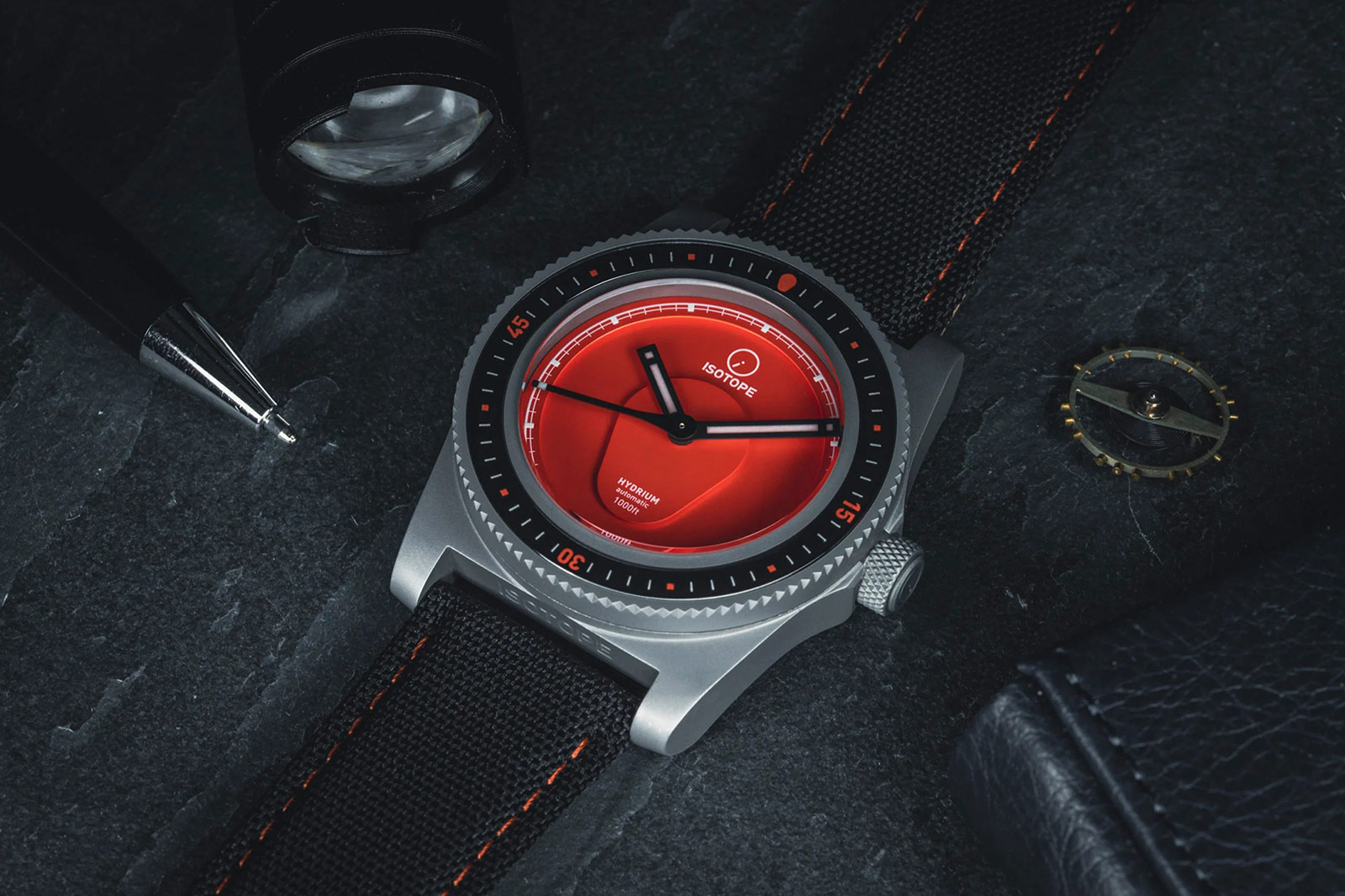 An Isotope is, for the non scientists out there, a different form of a particular element, a molecule with the same number of atoms, but different physical properties. In short, they have the same composite parts as what we’ve come to know and understand, they’re just put together in an entirely different way. So it is with Isotope watches, too.

Founded back in 2016 by José and Joana Miranda, the English brand has been making waves as one of the more innovative microbrands in the country – which is saying something, these days – a creativity that flows from the same spring as many an independent watch brand. Namely, if you can’t find your perfect watch, make it.

For José, whose own collection runs the gamut of Bell & Ross and TAG Heuer to a series of Genta Jumping Hours pieces, that perfect watch involved enlisting watch designer Vikenty Gryaznov, the man behind the insane Kontantin Chaykin Lunokhod piece. The watch however needed to be a touch more affordable. 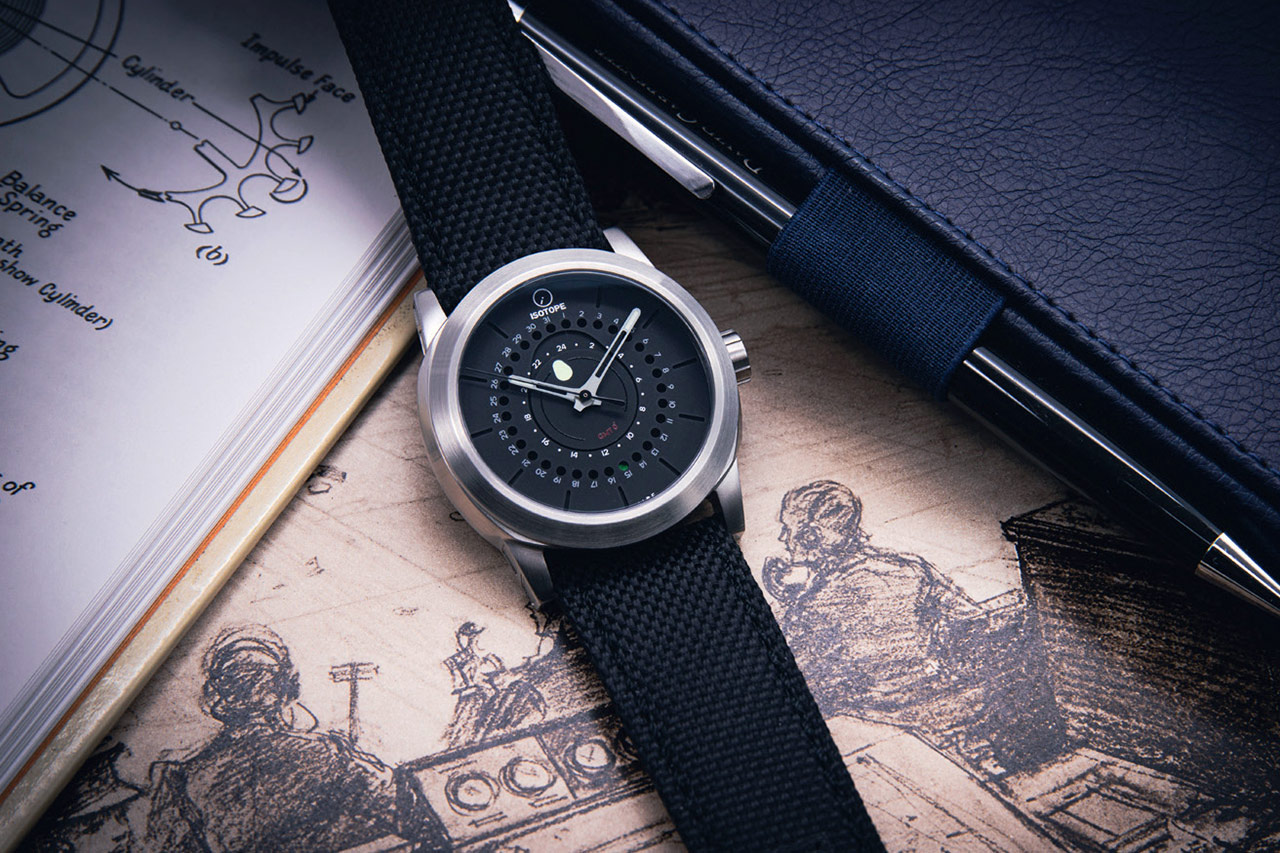 So, the Rider Jumping Hours was born. It has the fluid lines one would expect from the designer of the Lunokhod, but is otherwise a lot more pared back in both aesthetics and mechanics. Rather than placing the jumping hours at 12 o’clock like most, similar watches, it was at six o’clock, emphasised by the droplet silhouette that’s since become a defining Isotope touch.

In fact, there’s a lot from the Rider Jumping Hours and early Isotope timepieces that are still very much part of the brand today. Look no further for an illustration of that fact than the GMT 0°.

It still has that signature teardrop shape on the dial, but the other way up this time, forming the GMT disc and the aperture to read off the hour. Around that is the dot date indicator, before hitting the minimal hour markers at the outer edge of the dial. It’s simple to read and understand, but is most definitely not a layout we’ve seen elsewhere. If you’re looking for, in our opinion, what makes a quintessential Isotope timepiece, this is it. 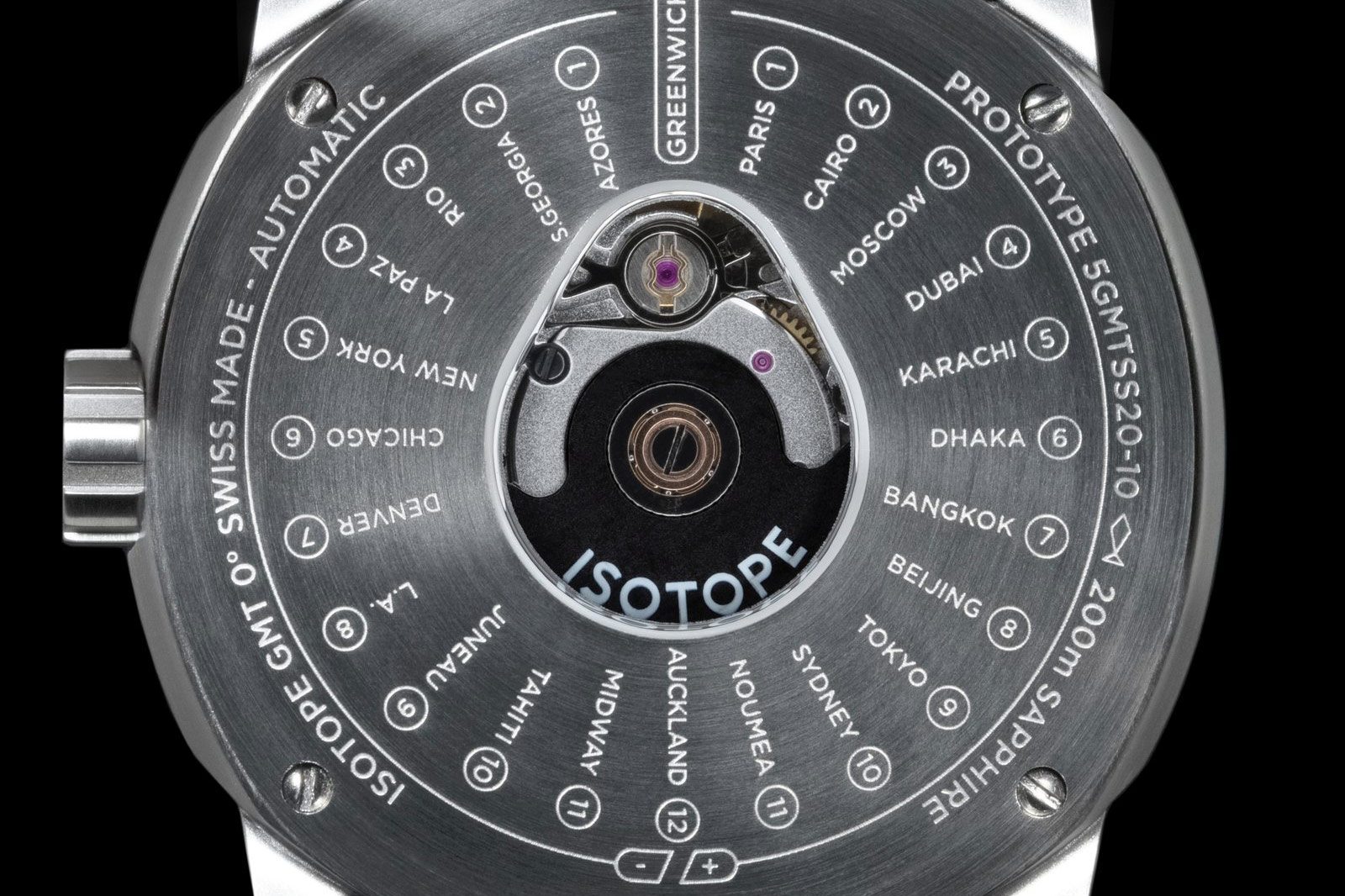 Powering the whole ensemble is a customised Swisstech S24 45 calibre automatic movement with a 40 hour power reserve. That’s kind of what you’d expect from a piece like this… until you take a look at the price. The Isotope GMT 0° is just £740.

Still, don’t expect to see one on every wrist. For one, it’s a pretty specialist looking watch and won’t be to everyone’s tastes (even if it’s very much to ours). For another, each colourway is limited to 49 pieces, with the black even rarer at just 10. 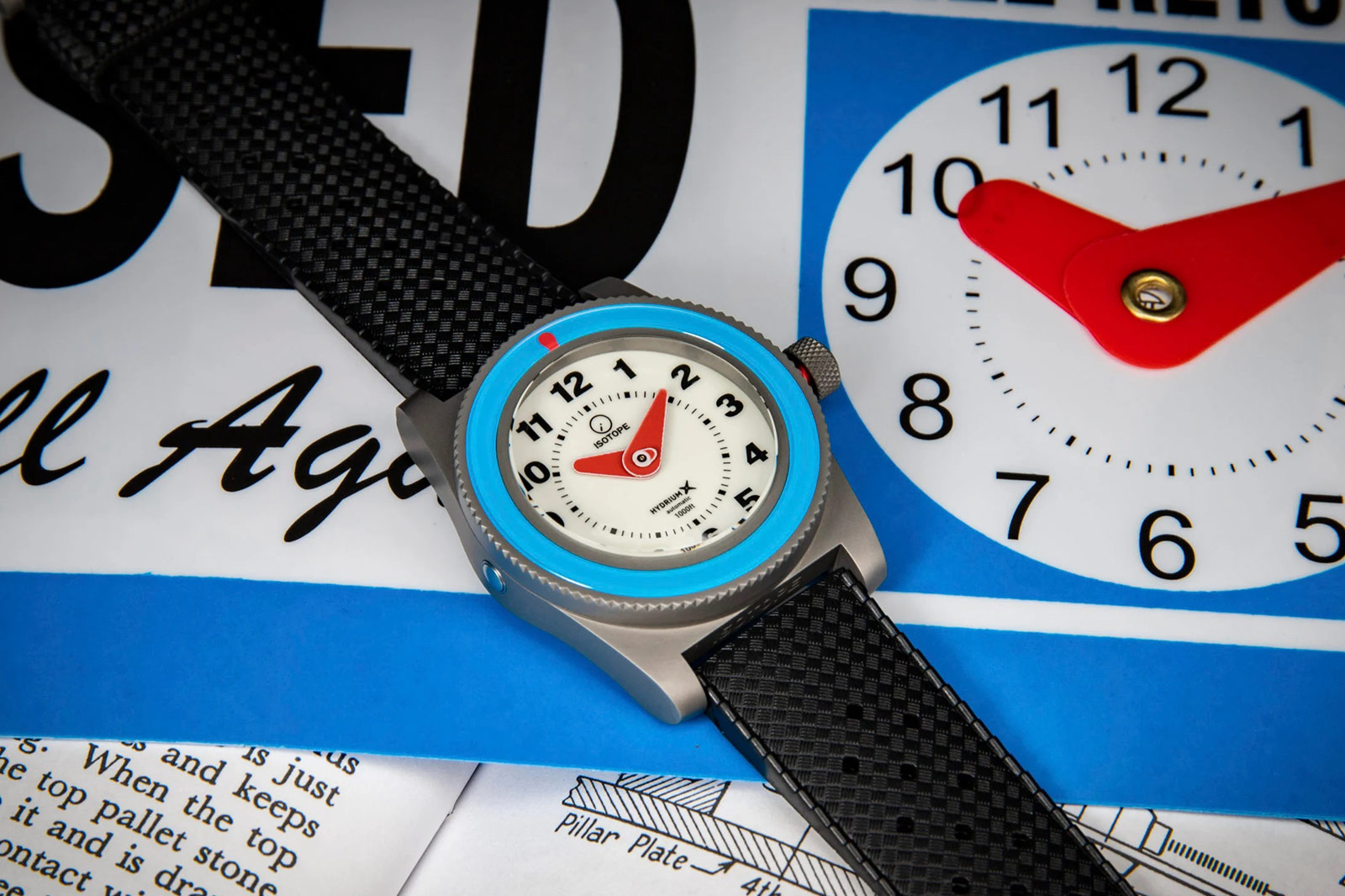 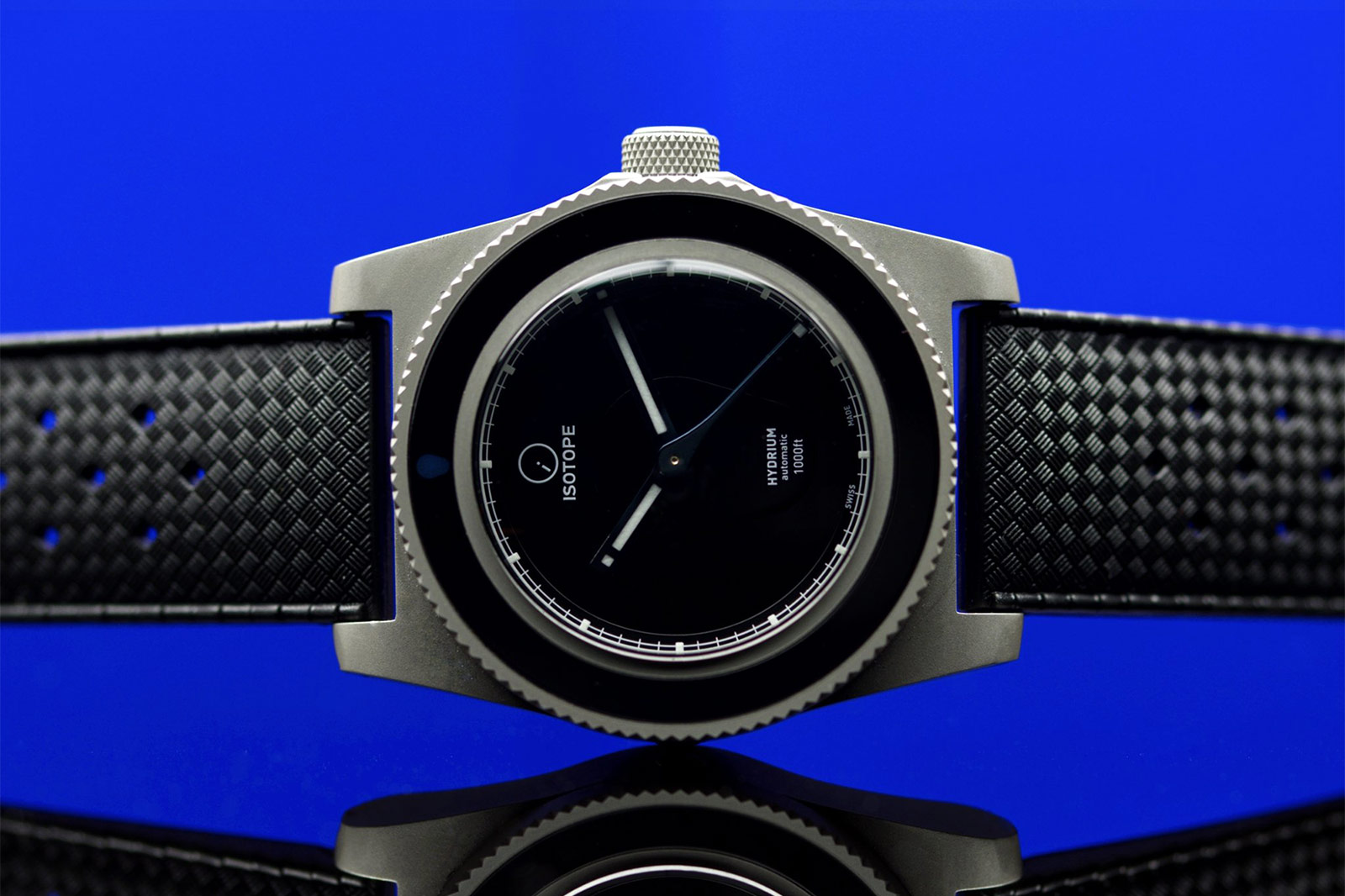 If that’s a bit too limited – or if you simply fancy something a little more fun with fewer complications – there’s also the recent HydriumX “Will Return” and HydriumX Burnt Tangerine. Both time only watches have the same fluid aesthetic codes as Isotope’s other pieces, but bring a pop of colour to the dive watch specs – blue, white and red for “Will Return” and dark orange for the other.

In this instance, both are limited to 100 pieces and are priced around the £450 with Miyota movements. In case you’ve not noticed yet, while their prices may be accessible, Isotope’s numbers mean you need to be quick off the mark to get one. And given what you can get for the money, quick you should be.