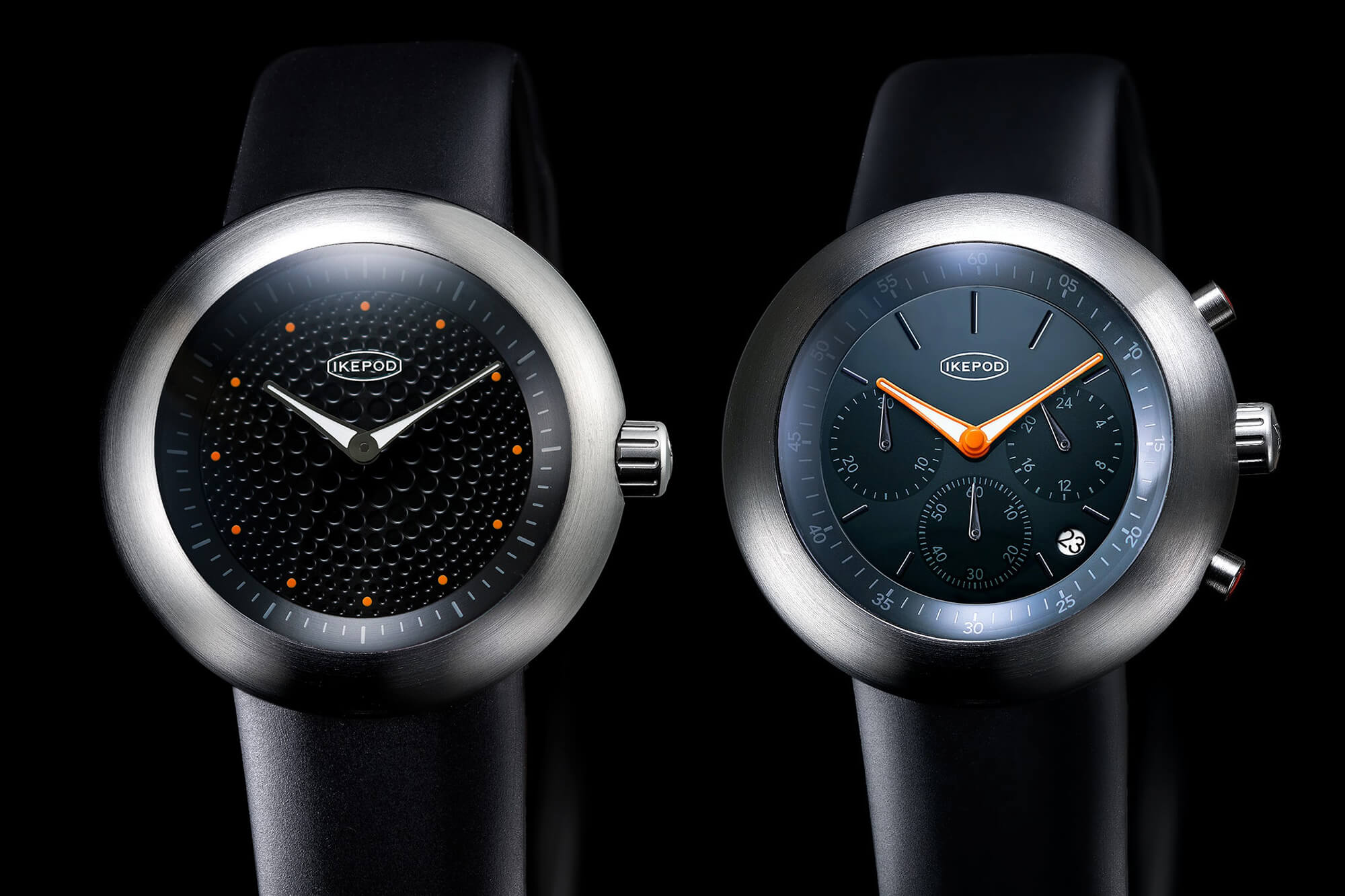 Back before microbrands brought a fresh approach back to small-scale watchmaking, back before even watchmakers like Ressence, Urwerk and MB&F made independent haute horology cool, there was Ikepod. In the nineties, Ikepod’s unique approach to watchmaking paved the way for concept watches and sleek limited editions, pioneering larger case sizes and artistic collaborations. Their iconic Hemipode is still a cult classic to this day and in the 2000s they counted Kaws and Jeff Koons among their fans.

That was until it was put on hold just under a decade ago, losing Ikepod’s original designer in the process. But it’s not just names dredged up from the 1800s or taken from the raft of sixties diving brands that are worth reviving and last year Ikepod followed the launch of the Duopod, Ikepod and two Kickstarter models in 2018 with the Megapod. 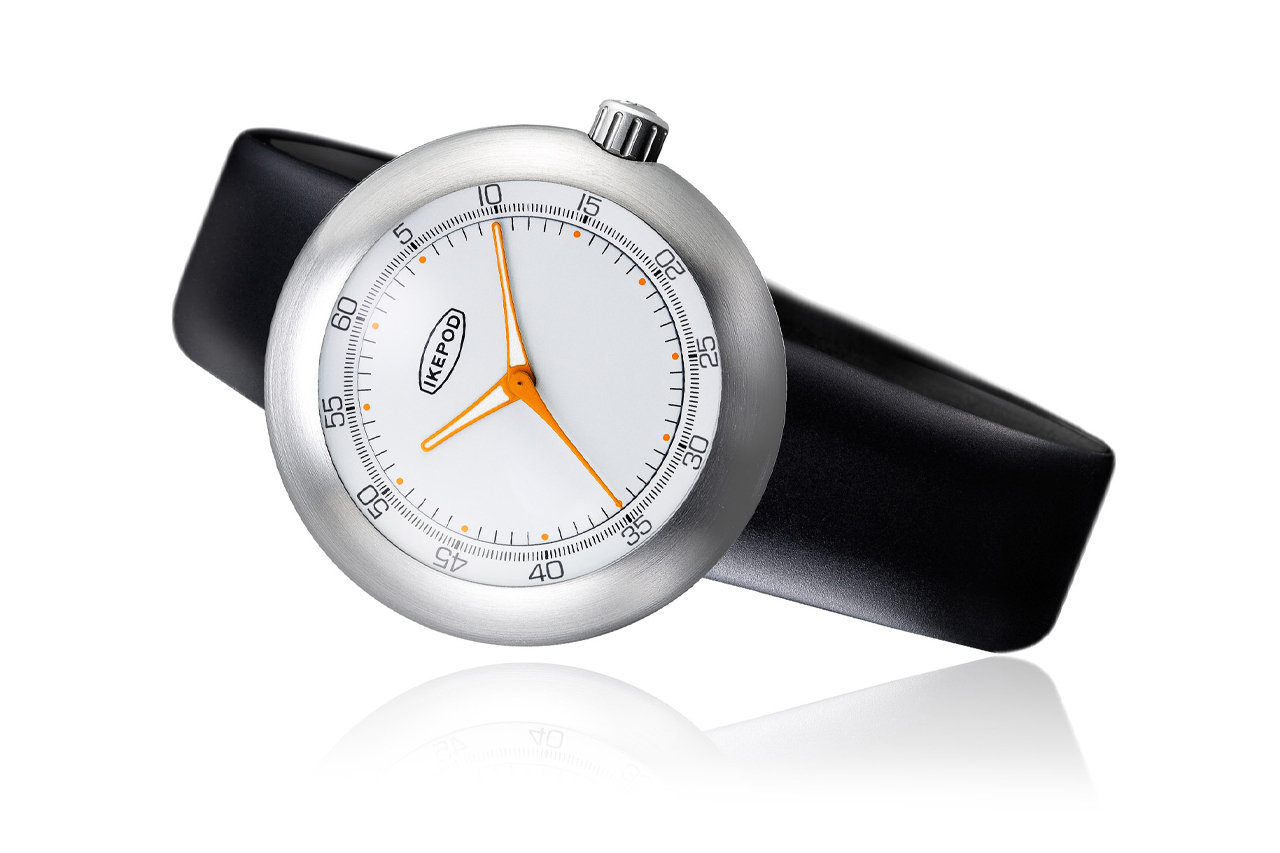 Aesthetically it’s like the brand never missed a beat. If Ikepod’s earlier watches were UFOs then the Megapod is their new mothership. And the similarities to a UFO aren’t just metaphorical, either.

Ikepod watches are defined by their flying saucer case shape, a tactile, rounded river pebble of a watch, part sleek minimalism, part playful, pop-art fun. The Megapod sits at a hefty 46mm across, while the Chronopod, a direct descendant of the Hemipode, measures in at 44mm. They’re big to be sure, but the perfectly circular shape and resultant lack of lugs means that they feel much smaller on the wrist.

The dials are just as aesthetically satisfying, though with entirely new design chops behind them. The Chronopod and smaller Duopod are both designed by Emmanuel Gueit, a designer that has worked with Piaget, Hermes and Rolex, and is the man behind the Royal Oak Offshore, riffing on Gerald Genta’s original octagonal icon. The Megapod on the other hand is in the hands of Alexandre Peraldi, previously of Baume & Mercier fame. 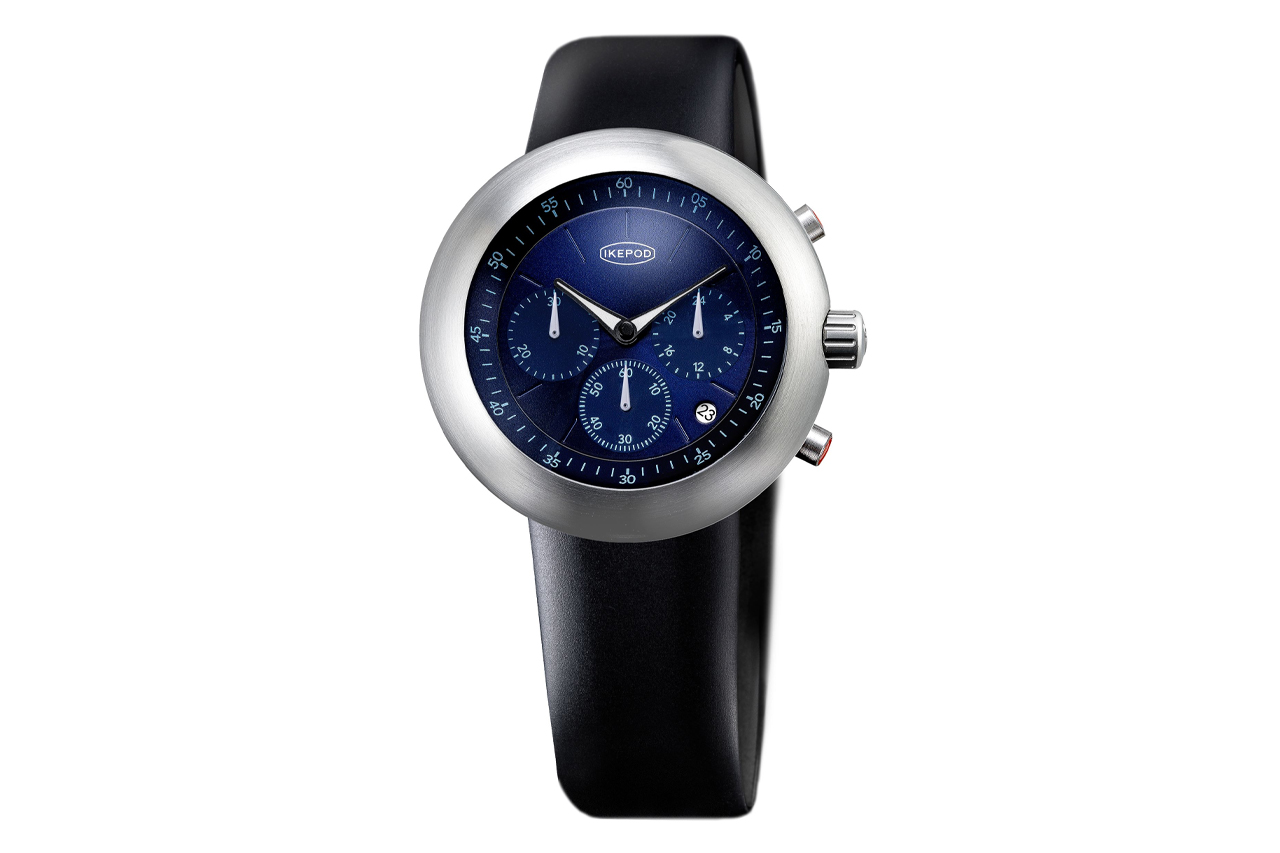 With that kind of design talent on hand, it’s no surprise that Ikepod watches are more a design choice than a horological one. While the Megapod uses a reliable yet fuss-free Miyota 9039 automatic movement, both of Ikepod’s smaller lines instead opt for quartz. Accurate, but not for the watchmaking purists out there.

It is however for the more artistically-inclined. Ikepod has been working with artists for 25 years and it makes sense that for the new generation of watches they’ve once again taken the same approach, most recently with lauded American painter Tom Christopher. 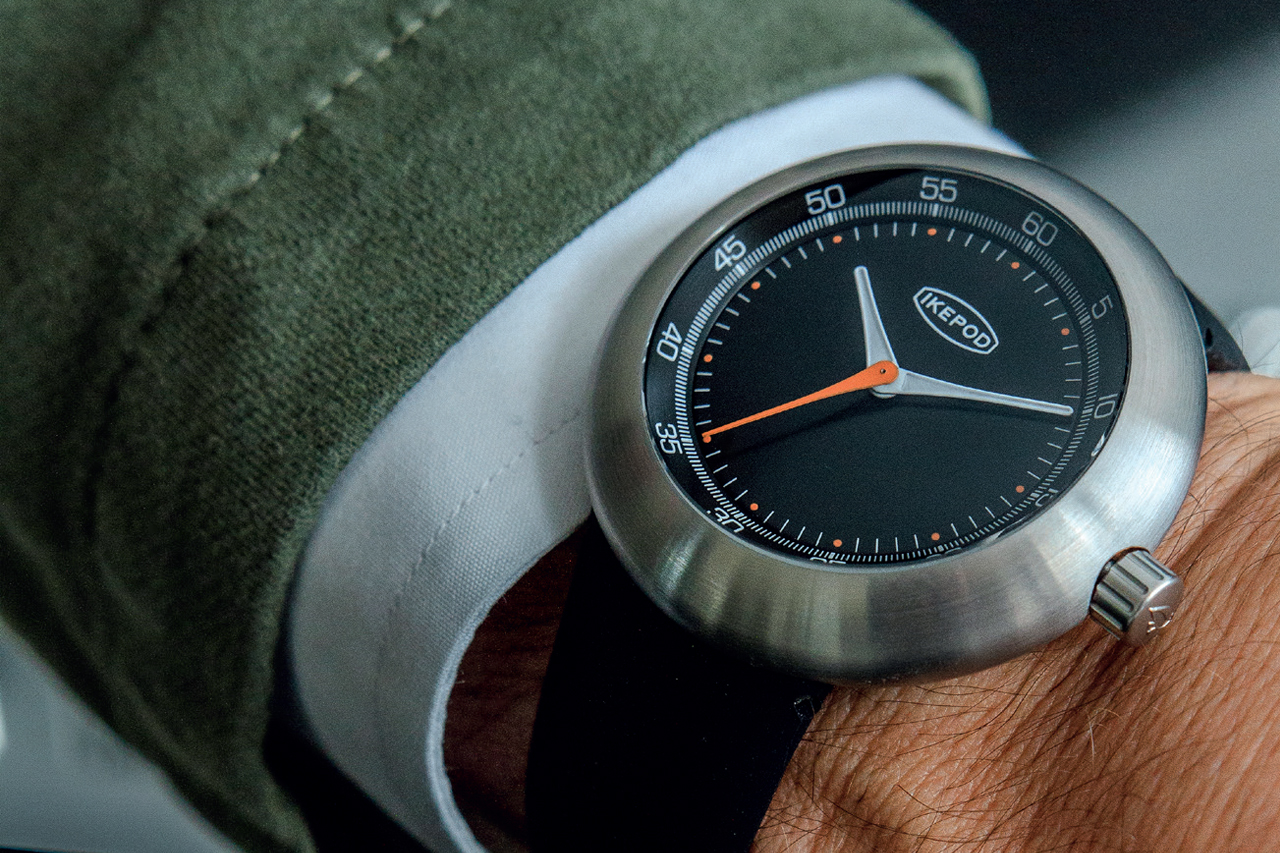 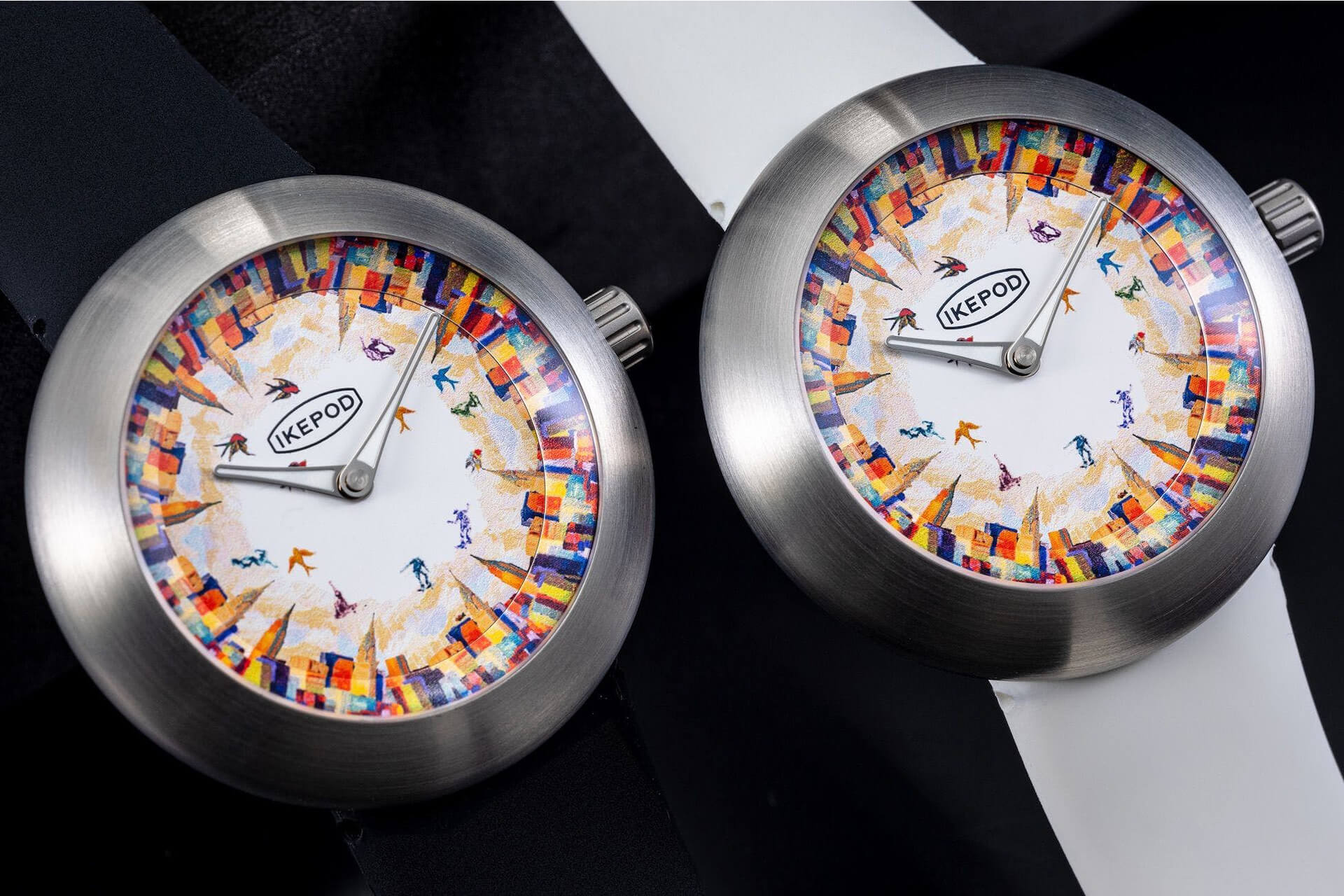 The Megapod MTC1 Skaters in the Sky embodies the painter’s optimistic outlook, with a dial border of colourful cityscape and a mix of swallows and skaters dotting the clouds at the centre of the watch. The sheer size of the Megapod makes for a broad, distinctive canvas and, limited to 200 pieces – only 50 of which will be available in the first batch – it’s only slightly easier to get hold of than a Tom Christopher original.

Between their signature case shape that helped define nineties watch design, the creative muscle behind their new generation and the artistic collaborations that still define the brand, Ikepod is back in a big way. Almost as big as a Megapod.

More details at The Devoy Group.