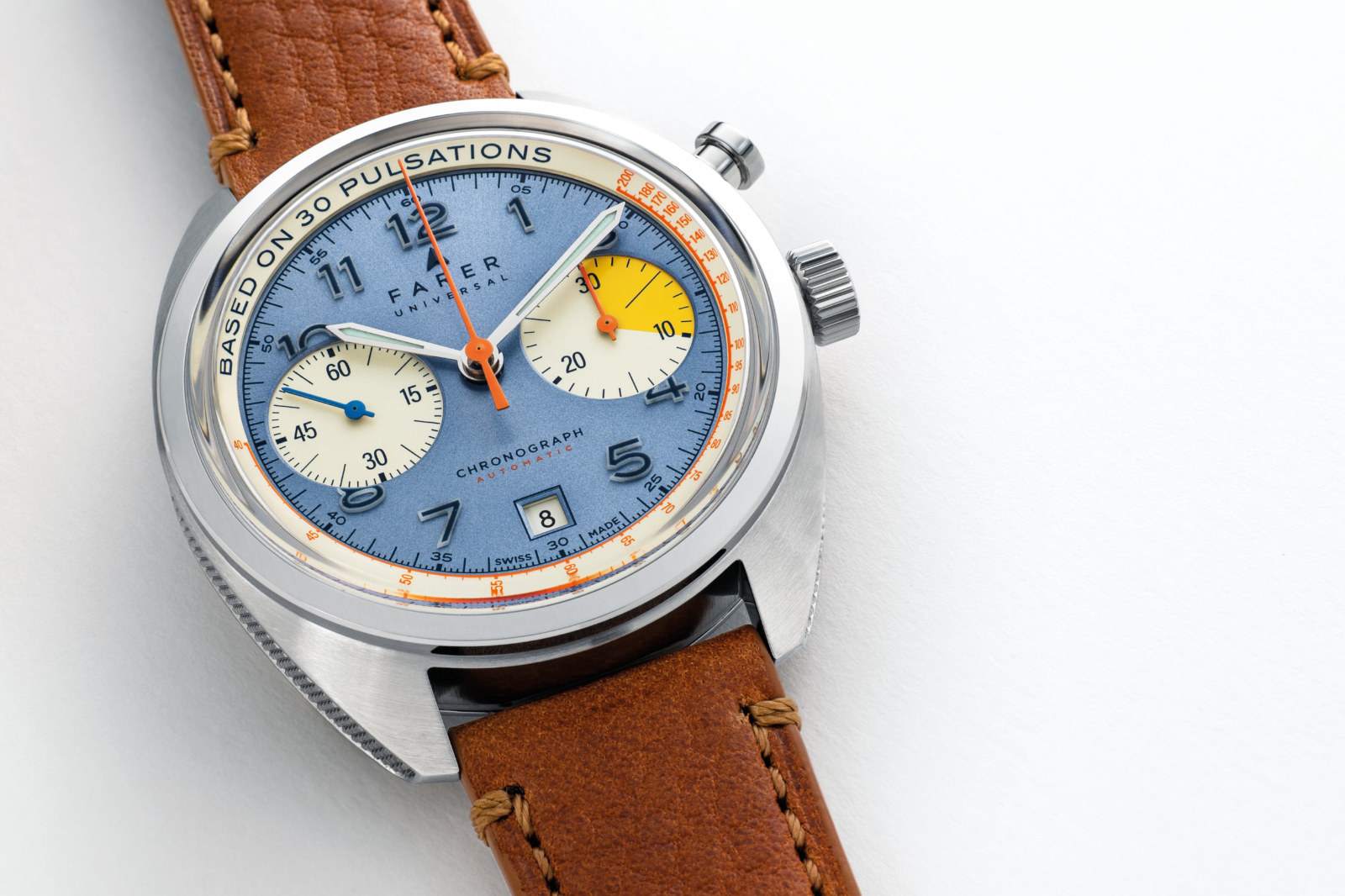 Well, this is one for the record books – I was actually right! Last month we got hands-on with the Farer Segrave, a fun retro monopusher (I know, they’re innately retro anyway) with a rarely used telemeter scale. As per usual, it was cool, colourful and incredibly well priced for the amount of watch you get. I did have one reservation though.

Farer watches tend to come in small capsule collections, showcasing a few executions of the same style of watch, be that pilot, field, whatever. It’s one of the things I’ve always liked about what they do, flexing their design chops to riff on a theme. The monopusher wasn’t given the same treatment.

So, I posited that they were just staggering the collection a little, holding the next piece in reserve. And, as they’d already gone for an off-kilter telemeter, I reckoned it would be a pulsometer to follow. A tachymeter’s just too mainstream. 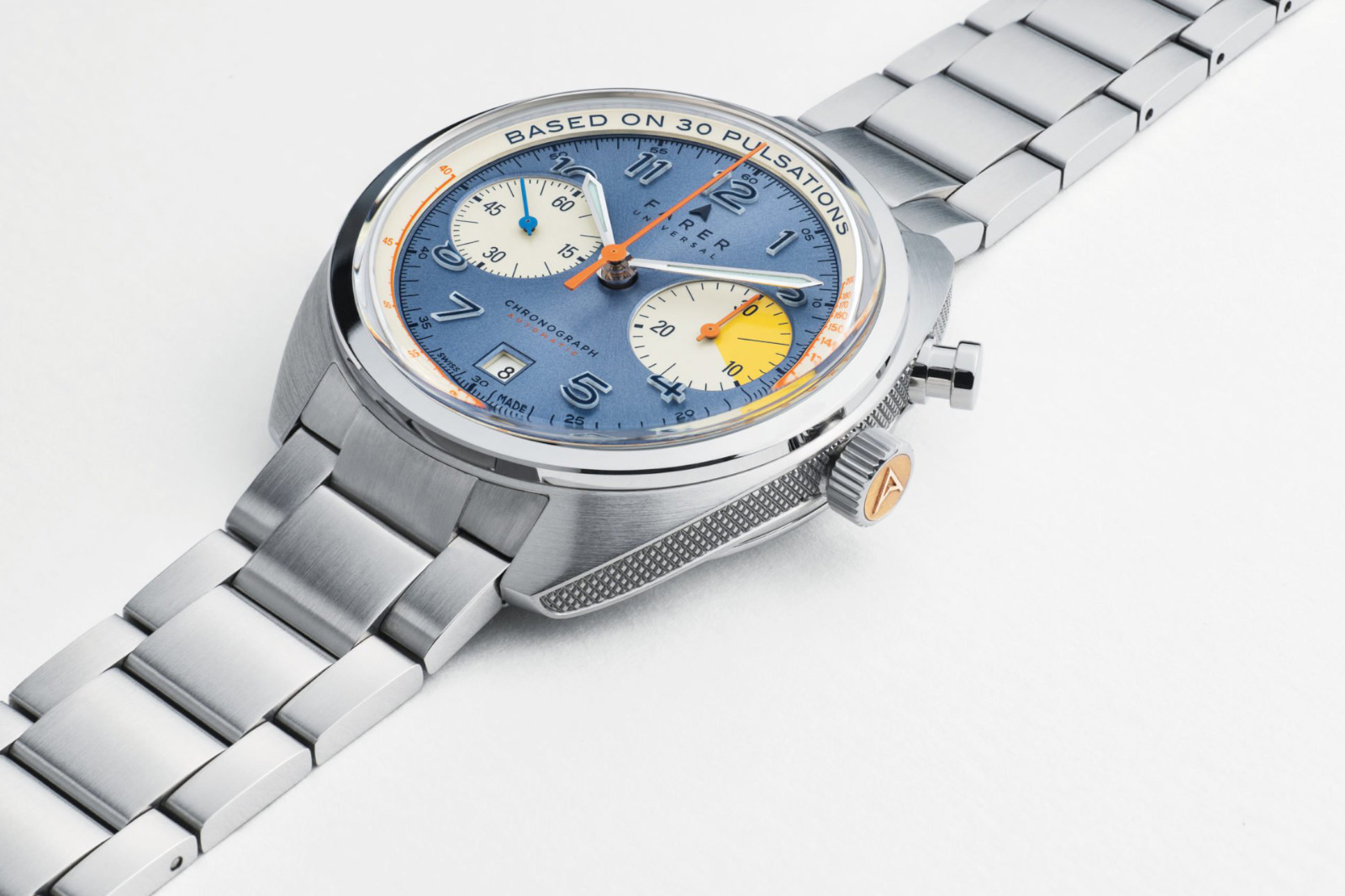 Lo and behold, here we have the Cobb, a lovely new monopusher chronograph complete with a pulsometer – and one that’s adds a dash of welcome cartoony colour to the mix. Where the Segrave kept a little closer to its classical roots, the Cobb is a lot more fun.

The layout is actually a bit more pared-back than the Segrave, with a standard bi-compax rather than the quirky big-eye, but there’s a lot more going on. For one, Arabic numerals rather than the more restrained indexes, eye-pleasingly cut off by the twin subdials. It makes for a fantastically balanced, impeccably finished dial. Then though, there’s the colour.

As ever, Farer’s use of colour is a world apart from the rest. The light blue main body of the dial is an unusual colour, almost steely, with a contrasting white pair of bi-compax subdials. The stopwatch minutes offer an eye-catching flash of yellow courtesy of a highlight over the first 10-minute third, and both chronograph hands – as well as the pulsometer scale around the circumference of the dial – are in bright orange. 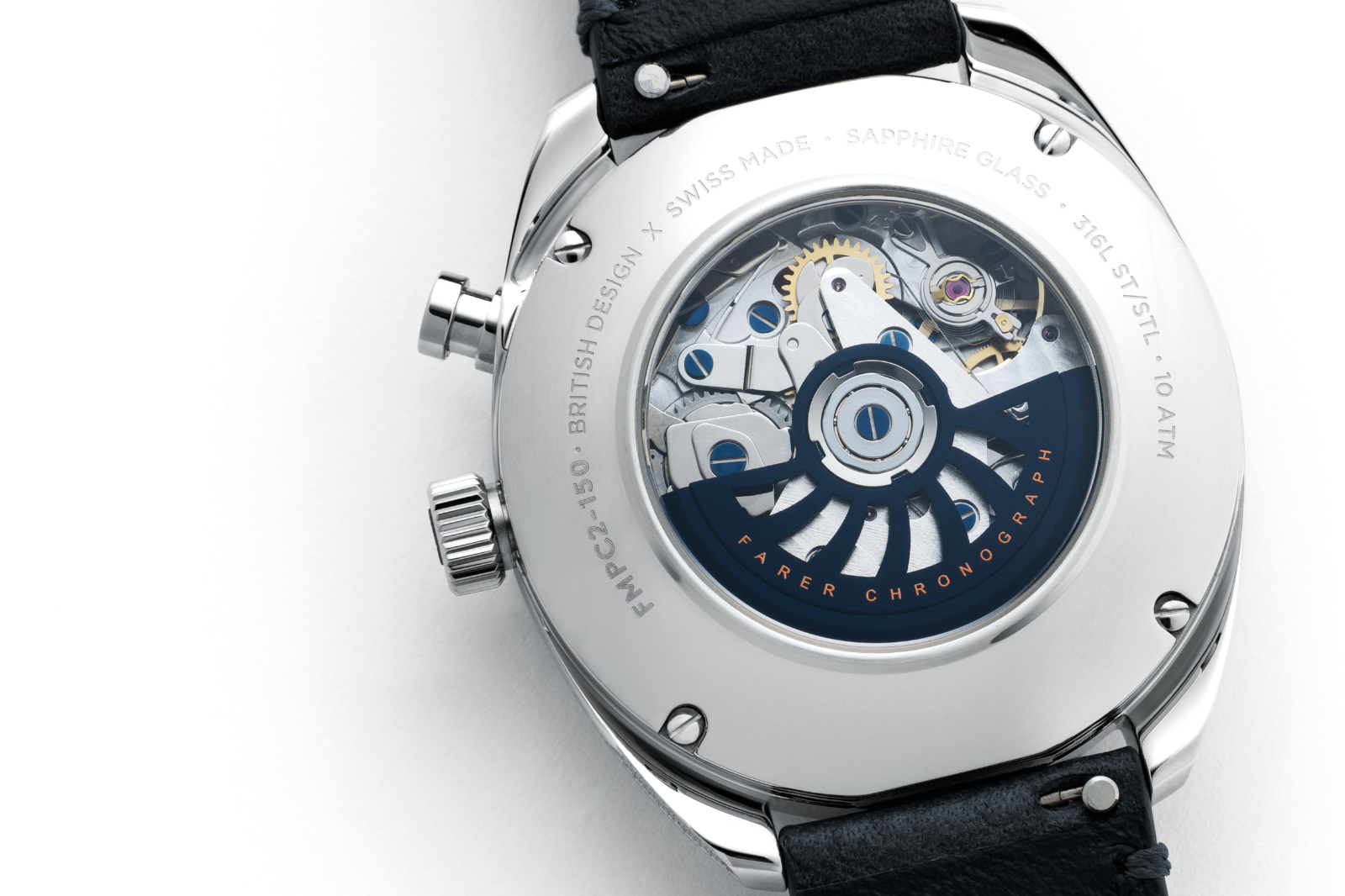 Inside is the SW510 MP Elaboré, the go-to monopusher chronograph movement for the few brands that actually offer them, and a solid piece of work with a power reserve of 62-hours, a decent amount for any third party automatic. It’s one of the better movements Farer has used so far, hence the price for these monopushers upping the ante a little bit.

Still, I’d not begrudge coasting above the £1,500 mark for the Cobb Monopusher Pulsometer Chronograph, especially as Farer’s finishing has jumped up a notch with it. Not on the dial of course, they’ve had those down for a while, but in the case. You might not see it from the lozenge-shaped front, but the sides of the case are knurled as finely as a Bentley dashboard, something I’d definitely like to see more of across Farer’s collections. Not necessarily that particular finish of course, just making the most of what’s usually dead space. 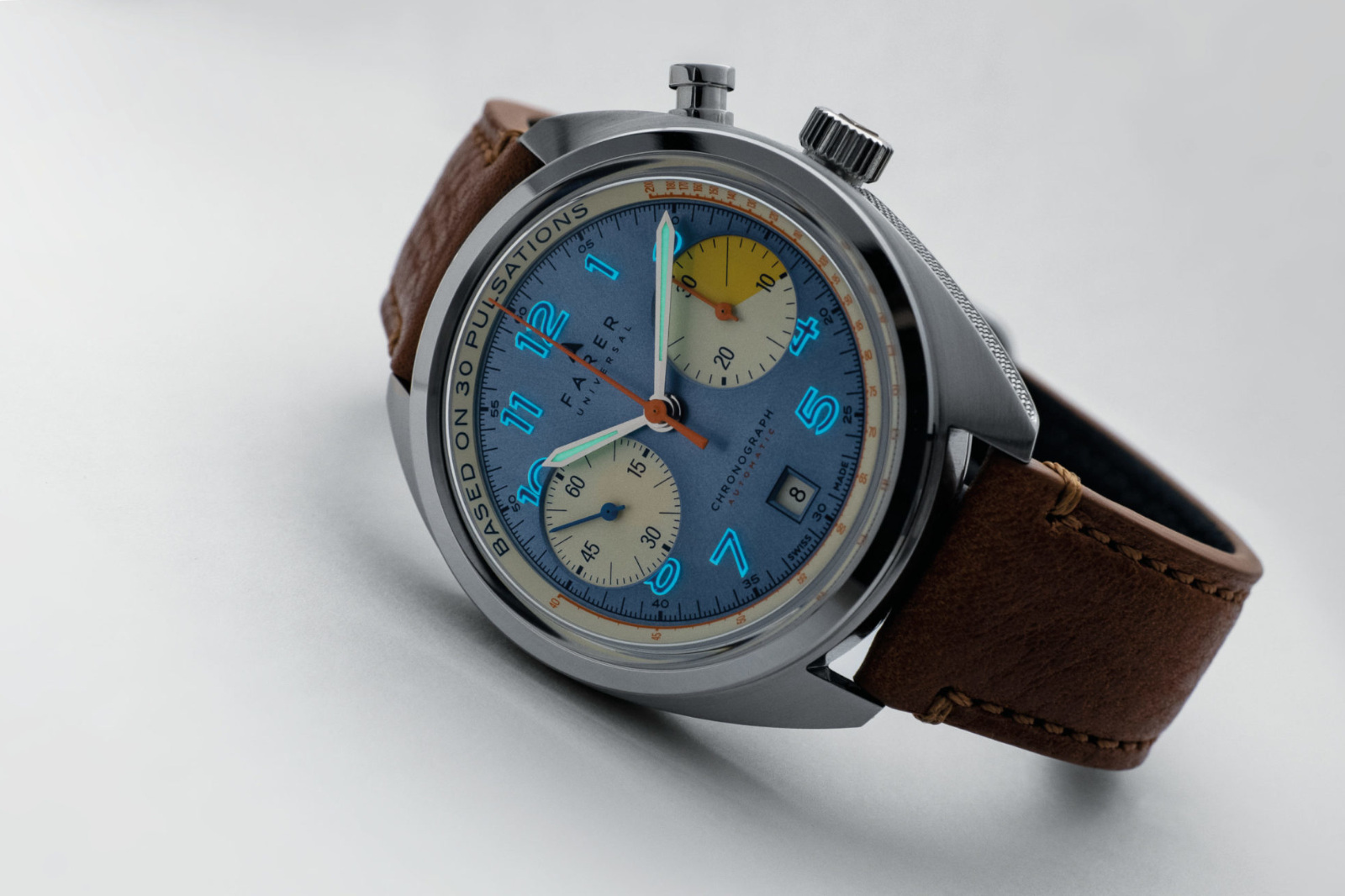 Finished with the brand’s signature bronze crown and available on a rubber or leather strap or a bracelet – I’d opt for the brown leather strap; not sure I could get away with the orange, much as I’d like to – the Cobb now makes the second in Farer’s new monopusher line. Does this mean there’s be a third? Will they, after going for the two far less obvious scales, introduce a tachymeter? 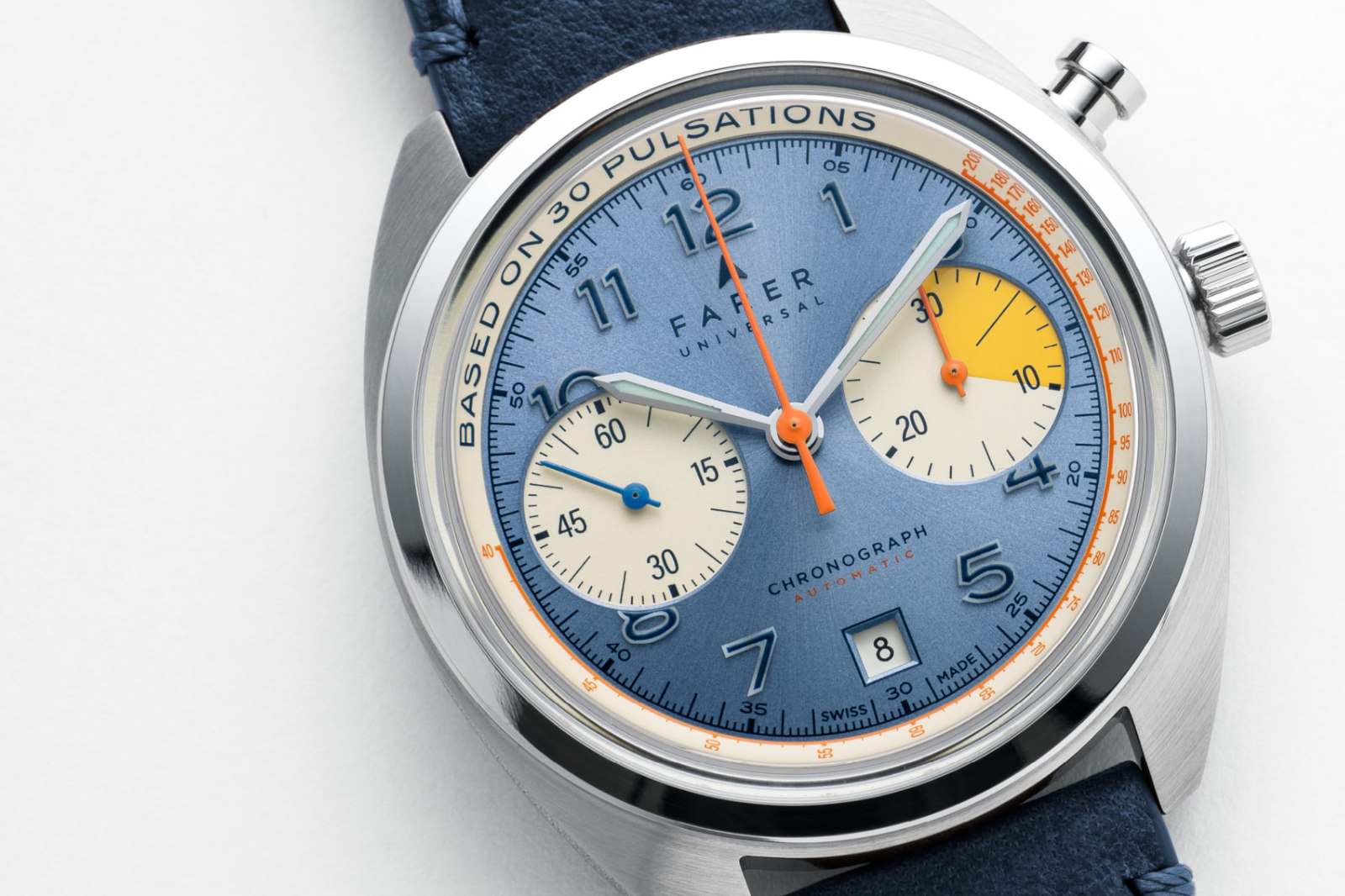 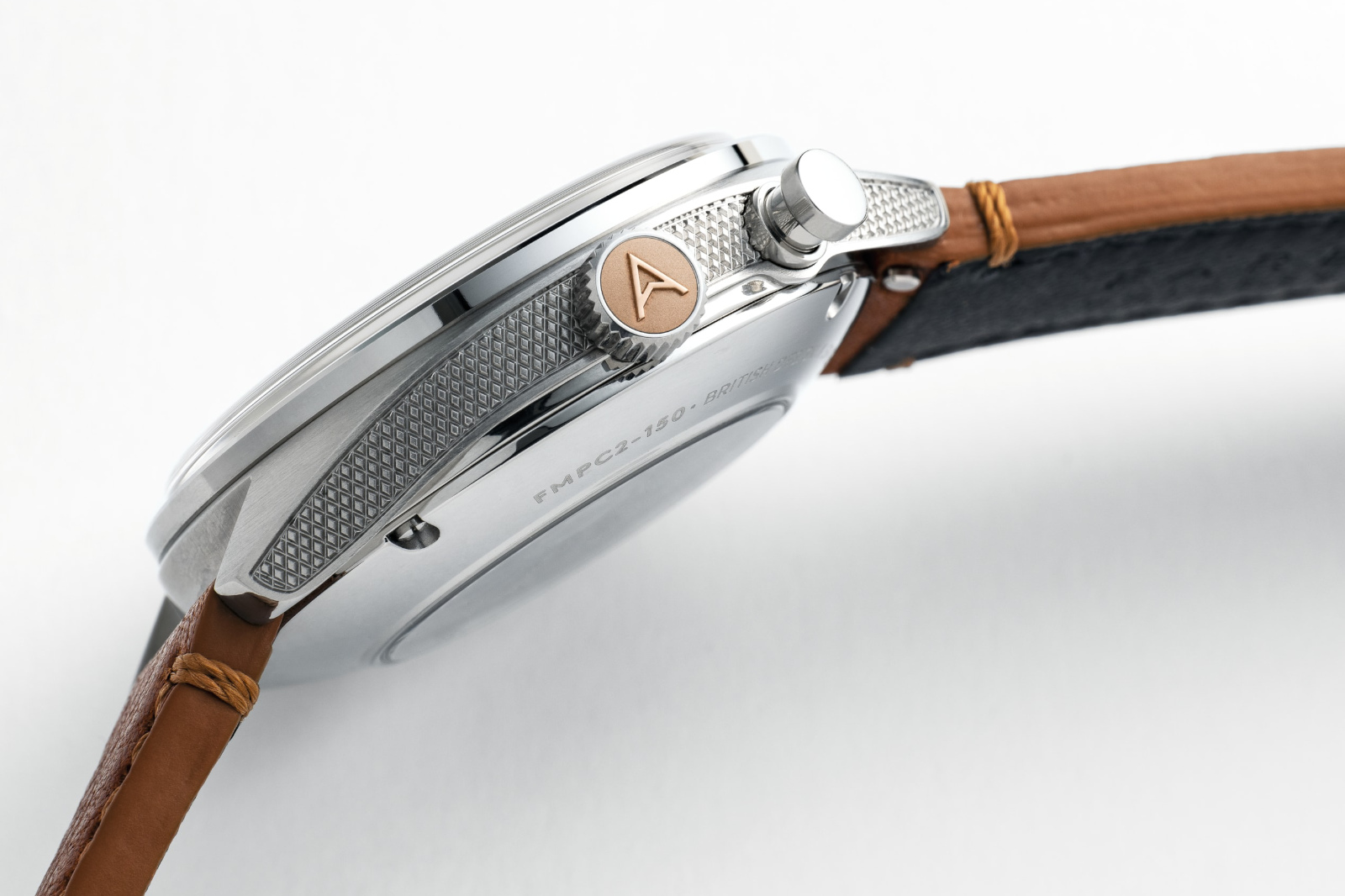 I kind of hope not. Not only is the tachymeter a much more common scale, but the Farer’s Chrono-Sport collection – particularly the teal-dialled Carnegie – have already done it, and well. Instead, why not a decimal bezel? The incredibly rare type of bezel is simple in concept – dividing a minute into 100 – but its uses are a touch esoteric. It could be one to have some fun with.

In the meantime, it’s good to see that not only are Farer making use of a monopusher, an outdated complication that I can’t help but love, but they’re showing that actually, it’s a damn sight more versatile than the occasional novelty chronograph would have you believe. And better looking, too.