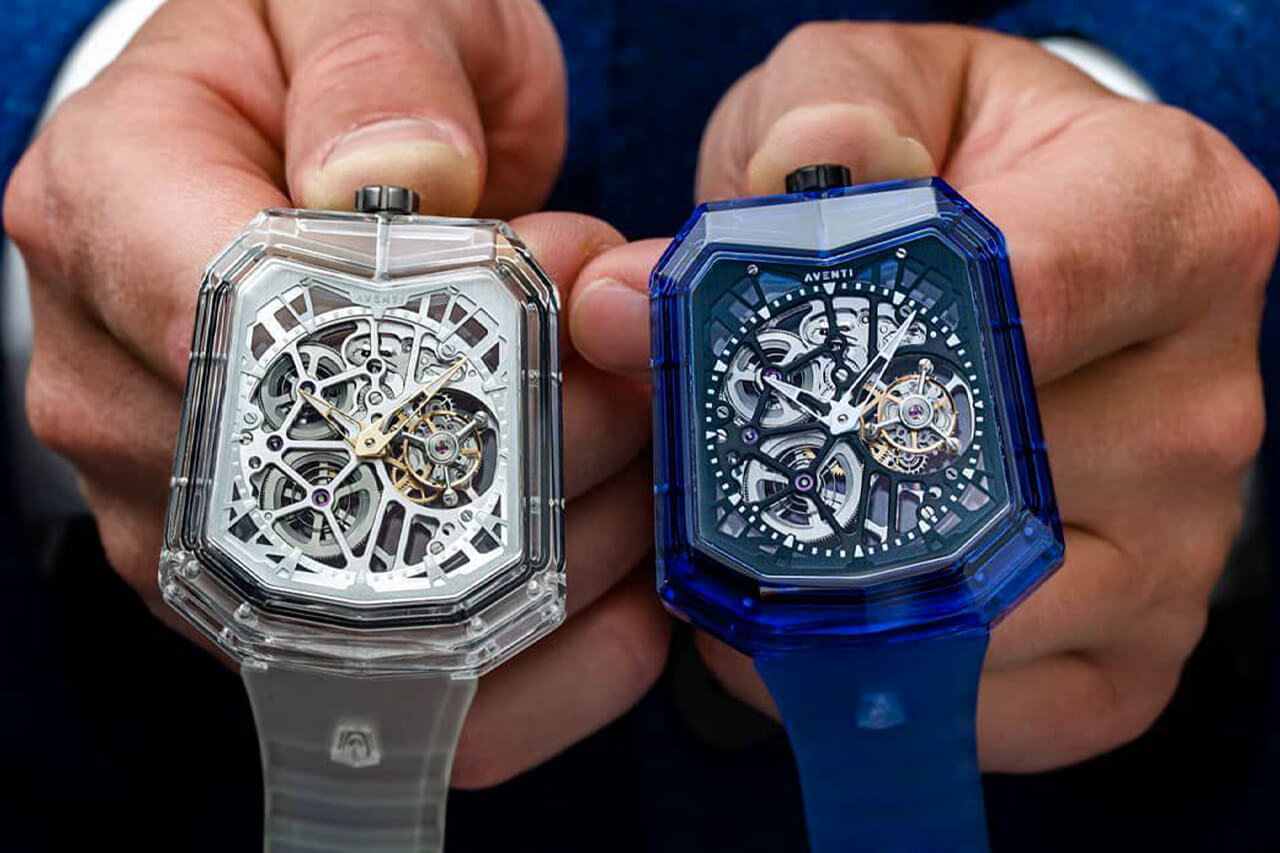 Ah the tourbillon, gravity-defying, mechanically mesmerising grand dame of haute horology. Sure, its actual usefulness has been debated by scholars and budding watchmakers for centuries to apparently very little conclusion, but there’s one thing that’s not up for debate: a tourbillon is expensive.

Just adding that one word to the end of a watch’s name also tends to add a couple of 0s to the price tag (assuming the watch started in the thousands to begin with, of course). We’ve come to accept that, if you want your balance to rotate independently from the rest of the watch in a vain attempt to offset gravity, you need to pay through the nose for it. Aventi, on the other hand, has not. 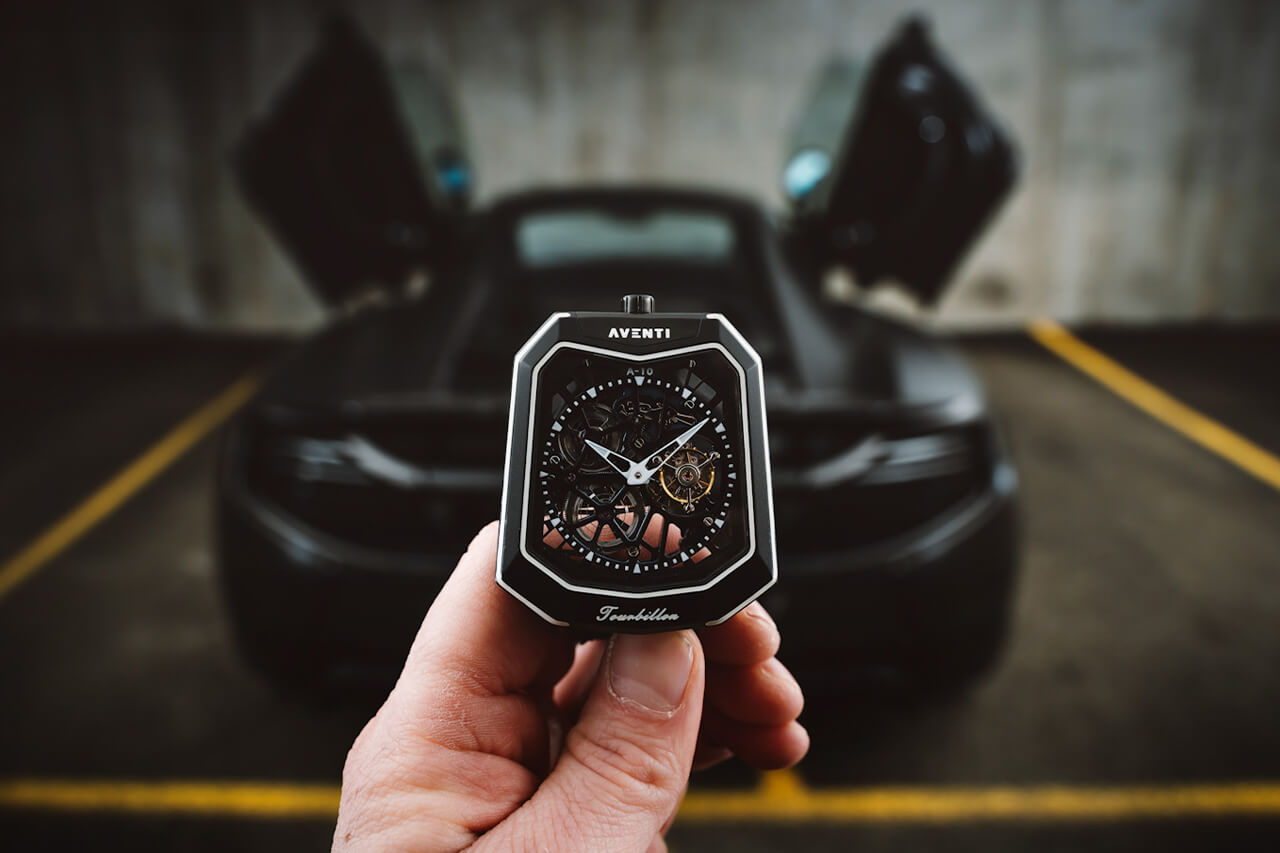 Aventi A-10 in Nero Black

Challenging the assumption that ‘tourbillon’ and ‘price hike’ are synonymous, Aventi’s watches aren’t what you might expect from anything labelled as value-for-money. They’re aesthetically more what you’d expect to emerge from the workshops of McLaren or Lamborghini than a well-priced piece of haute horology.

That’s because supercars are well and truly part of Aventi’s DNA. Its watches’ big, bold cases with crowns at 12 o’clock are shaped more like engine blocks than traditional timepieces, the colours of their livery more at home on the track than the wrist. Throw in extraordinary proportions and faux-aerodynamic curves and it’s an automotive inspiration Aventi wears on its sleeve. 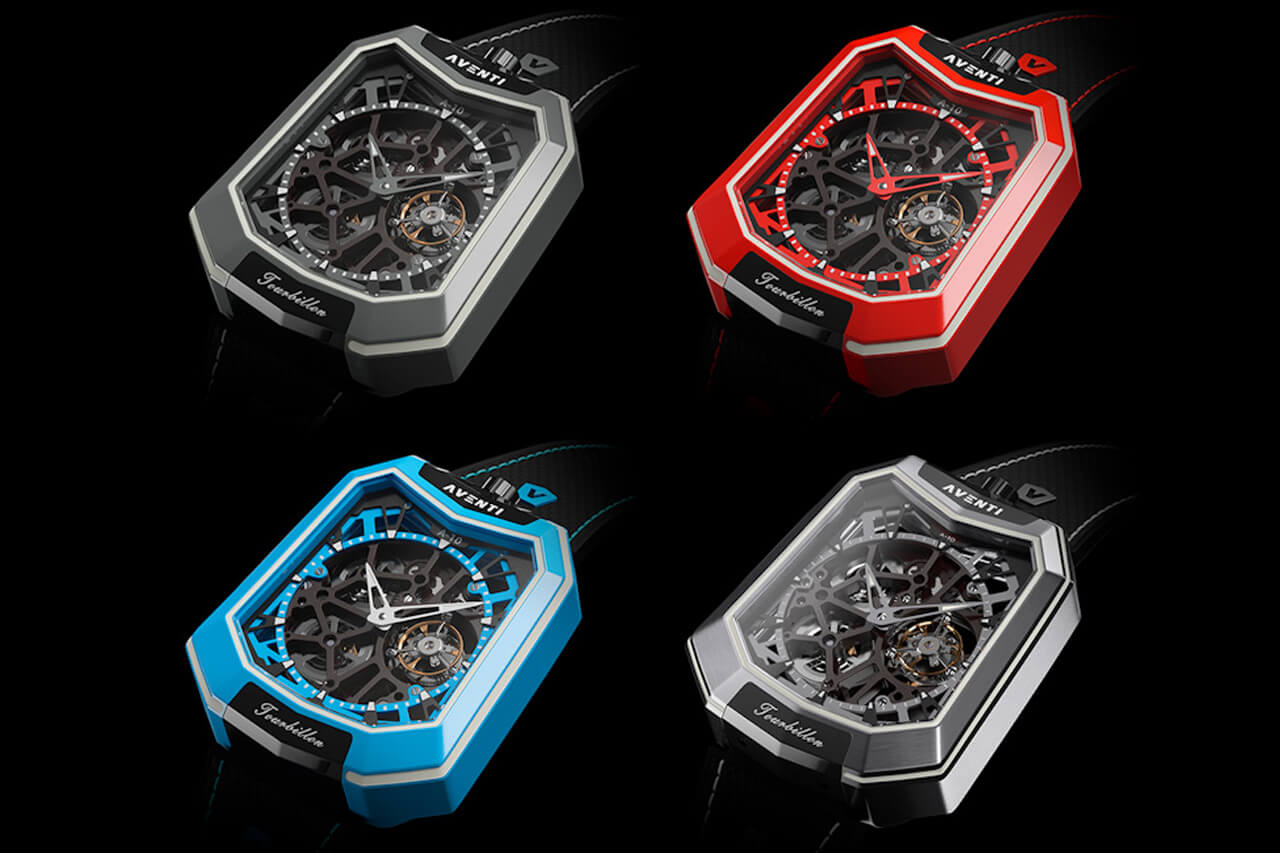 It’s not just the look of the watches that links them to the high-octane either. Both collections, the A-10 and A-11, rely on cutting-edge materials. In the case of the A-10 that’s lightweight titanium given an ultra-hard coating of coloured ceramic to balance comfort and wearability with durability, finished on a rubber strap with carbon-like detailing. The whole thing is outlined with lume so that, in low light, the entire case, not just the dial, glows. 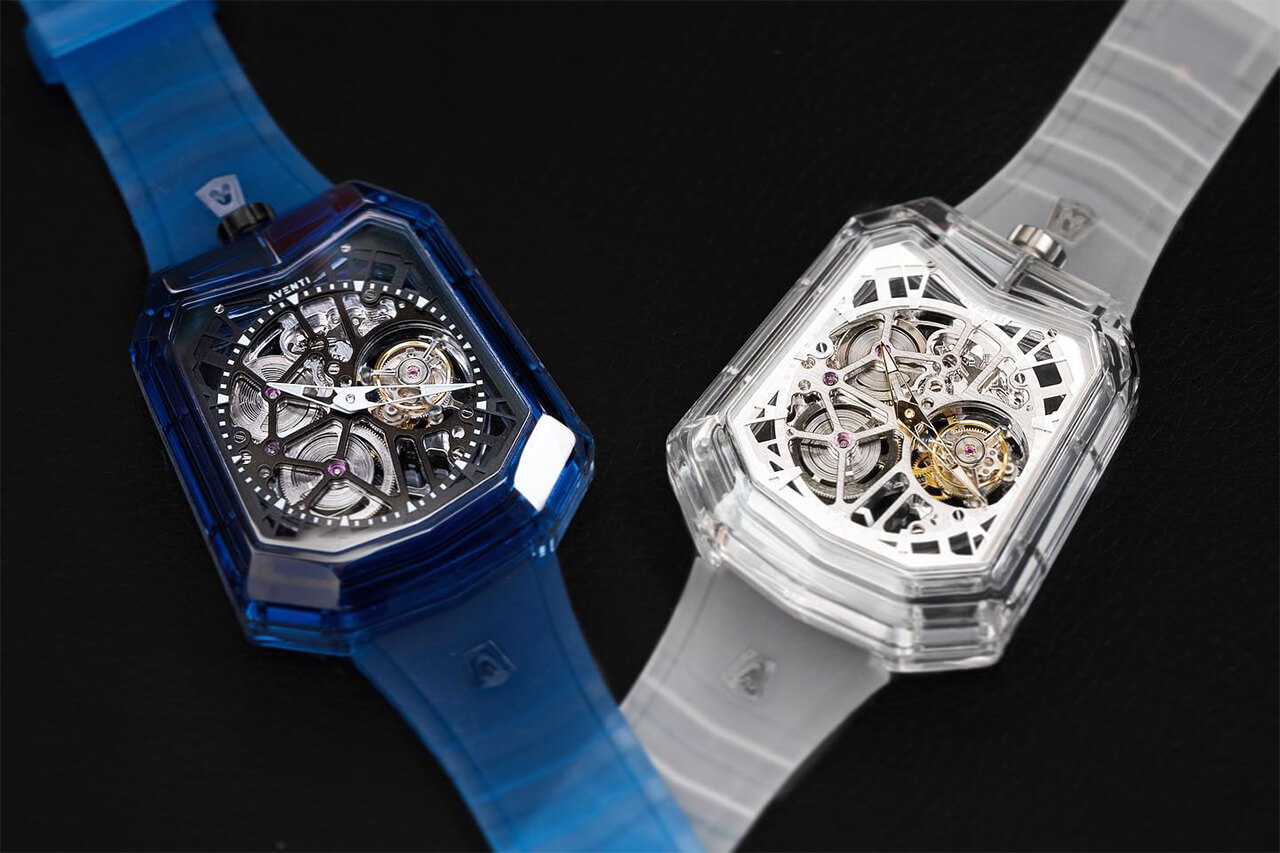 Aventi A-11 in Royal Blue Sapphire and Sapphire Crystal

The A-11 goes even further. Full sapphire watches are a whole rarefied sub-genre of timepiece, and the A-11, either in clear sapphire or a stunning royal blue, is a shiny new entry into the canon. The sheer size of the thing – 55.5mm by 48.5mm – is impressive, a feat never before achieved in watchmaking. It also looks spectacular on the matching translucent silicone strap.

At this point, the tourbillon seems almost a by-product of creating a hypercar-inspired watch. Still, you’re not going to miss it, as both the A-10 and A-11 have fully skeletonised movements, showing off the architecture of the calibre and the various mesmerising moving parts through a series of spidery bridges Roger Dubuis would be proud of.

The specs of the movement are up to scratch, too: a modified Caliber 3450 hand-wound tourbillon movement, complete with a hefty 72- hour power reserve, courtesy of twin mainsprings. It’s a movement that not only looks the part, but has a specs sheet to boast about. 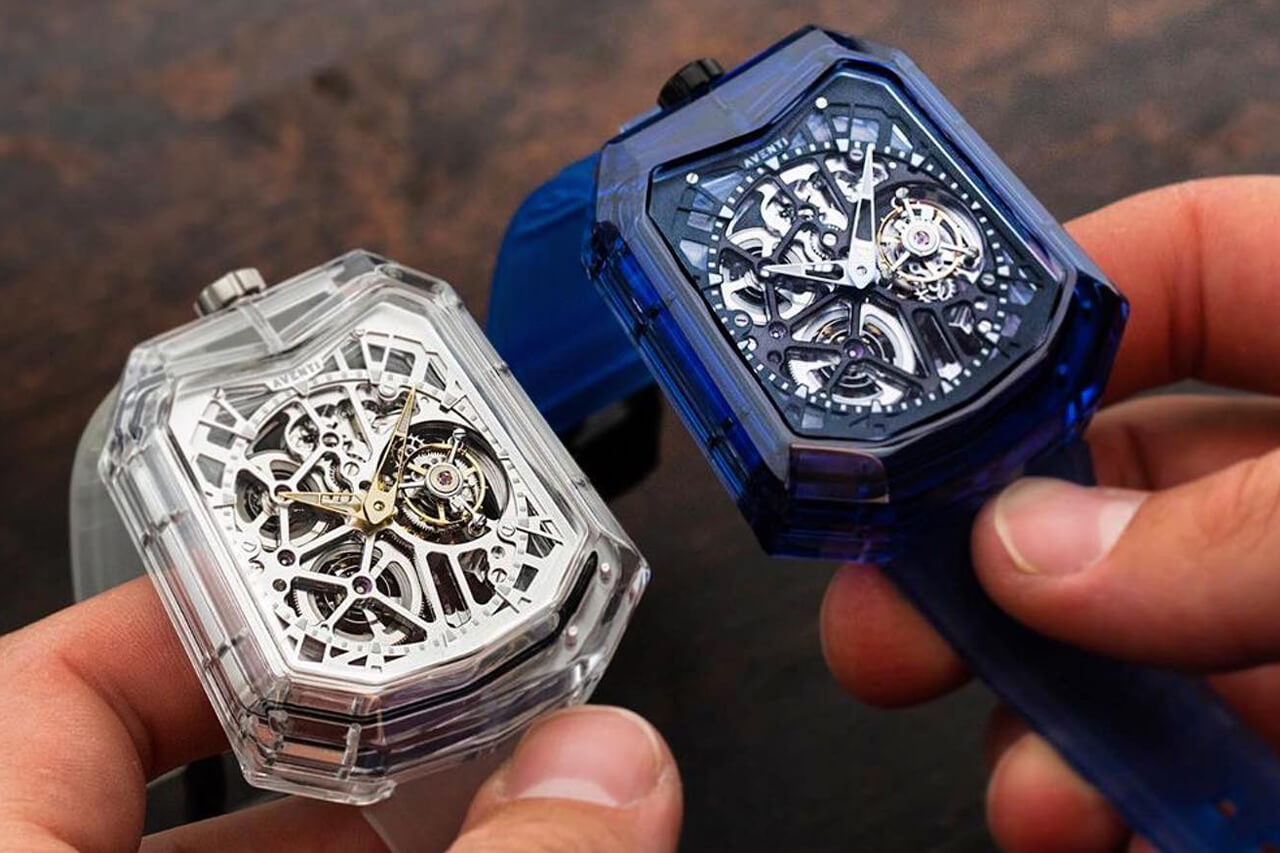 Aventi A-11 in Royal Blue Sapphire and Sapphire Crystal

So down to brass tacks: price. Any tourbillon under 50K seems comparatively accessible, but where does Aventi’s land? Under 15K would be seriously impressive; under 5 is ridiculous. For the Aventi A-10 however, you’ll need to shell out just $999. For the pure sapphire model – a watchmaking first, remember – it’s just $2,800.

Even without a tourbillon, that’s an incredible price tag for a well-built, skeletonised watch using racing materials. Well, some of the more traditional watchmakers will certainly be keeping an eye on Aventi – as should you.