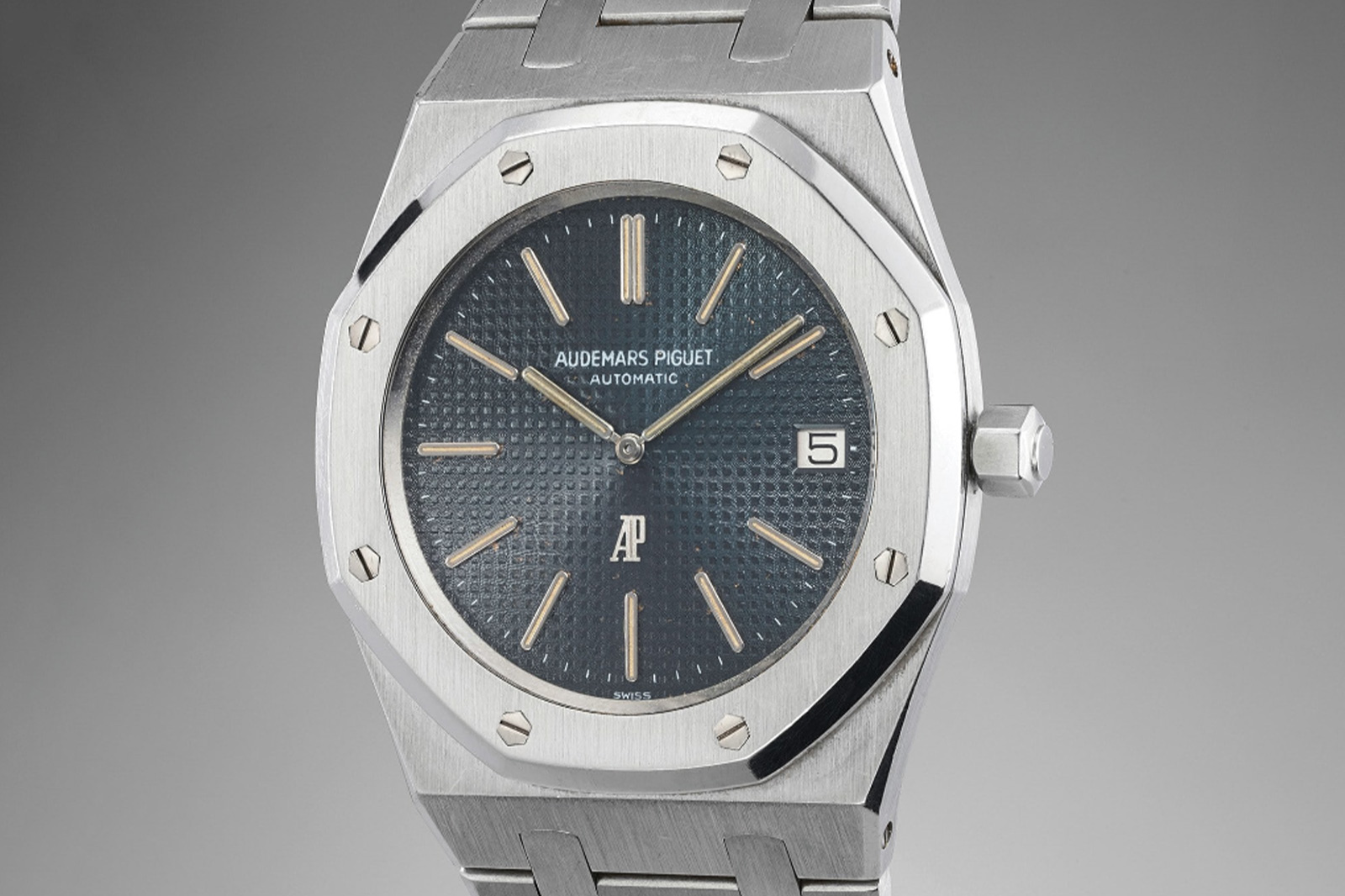 You probably know the story by now. The quartz crisis was in full swing, a black hole devouring any hope of haute horology surviving the decade. It dragged in countless watchmakers, big and small, and wrapped its tendrils around Audemars Piguet – until the shining light of the Royal Oak burst through the gloom and saved watchmaking. Cue choral harmonies.

Now, obviously hyperbolic as that all is, it’s true that the Royal Oak was a lifeline for the watchmaker. Had it gone awry, there’s a good chance Audemars Piguet wouldn’t be around today. Or at the very least would have needed to stage a revival. So, when the first Ref. 5402ST (ST of course denoting steel) made its debut at the Swiss Watch Show 1972, there was a lot at stake. 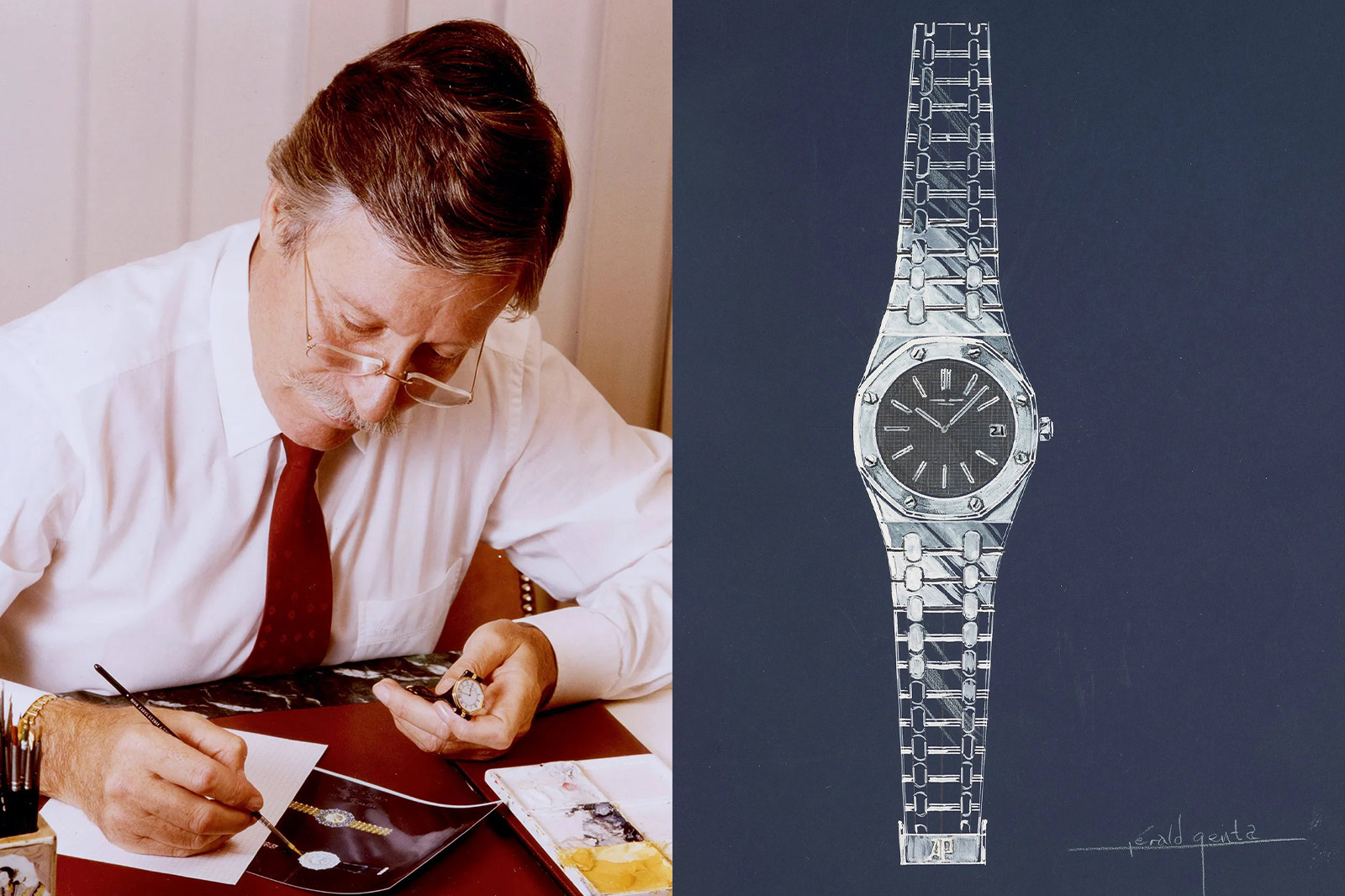 The (for the period) large, 39mm stainless steel sports watch was like nothing that had come before, a rugged timepiece with industrial styling that was priced among the big boys of the watch world (At CHF 3,650 or £2,900, it was 10 times the price of a Rolex Submariner at the time). An integrated, impeccably machined bracelet, a clean, minimal dial and a name derived from an Old British warship, it was, in fact, revolutionary. 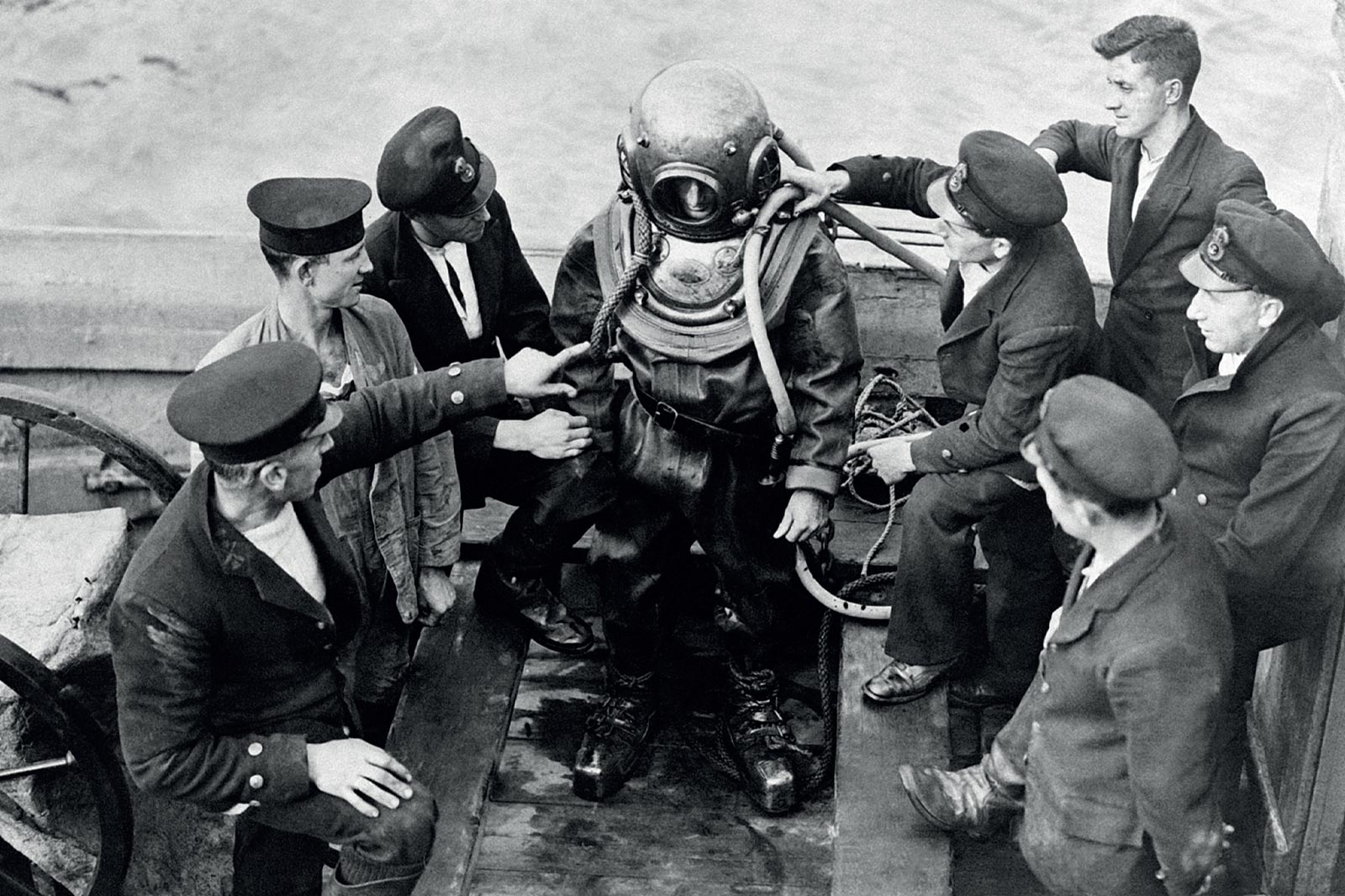 What’s perhaps more impressive is the apocryphal story behind it: that legendary designer, Gérald Genta, only had one night to come up with the design. It goes that he received the brief from then-CEO Georges Golay the evening before the new watch was due to launch at Baselworld, that brief being an ‘unprecedented steel watch’. No pressure then. So, the designer took inspiration from a diving helmet he’d once seen – one with eight bolts and an octagonal face plate, and one that doesn’t seem to have existed in the first place. A stress dream brought on by an impossible deadline? Possibly. And we applaud him for it.

Still, last-minute as the Ref. 5402 Royal Oak’s creation was, its success wasn’t perhaps as unexpected as it might have seemed. For one, there was already some interest in a steel sports watch from a major AP distributor, the Société Suisse pour l’industrie Horlogère; for another, Gérald Genta was already a horological household name, having previously designed the Omega Constellation and Patek Philippe Golden Ellipse. The Royal Oak wasn’t as much a deus ex machina as it was a well-reasoned bet, albeit one made on impulse.

Its impact was definitely felt. In the years right after release, it was followed rapidly by a slew of similarly designed steel sports watches, many of which Genta had a hand in himself, including the Patek Philippe Nautilus, IWC Ingenieur and others. In fact, it would be easy to put the Royal Oak’s success down to crossing the finish line first. But there’s more to it than that. The phrase ‘often imitated never duplicated’ comes to mind and that’s still true half a century on. Even Genta himself said that the Royal Oak Ref. 5402 was his masterpiece – and Audemars Piguet agreed. 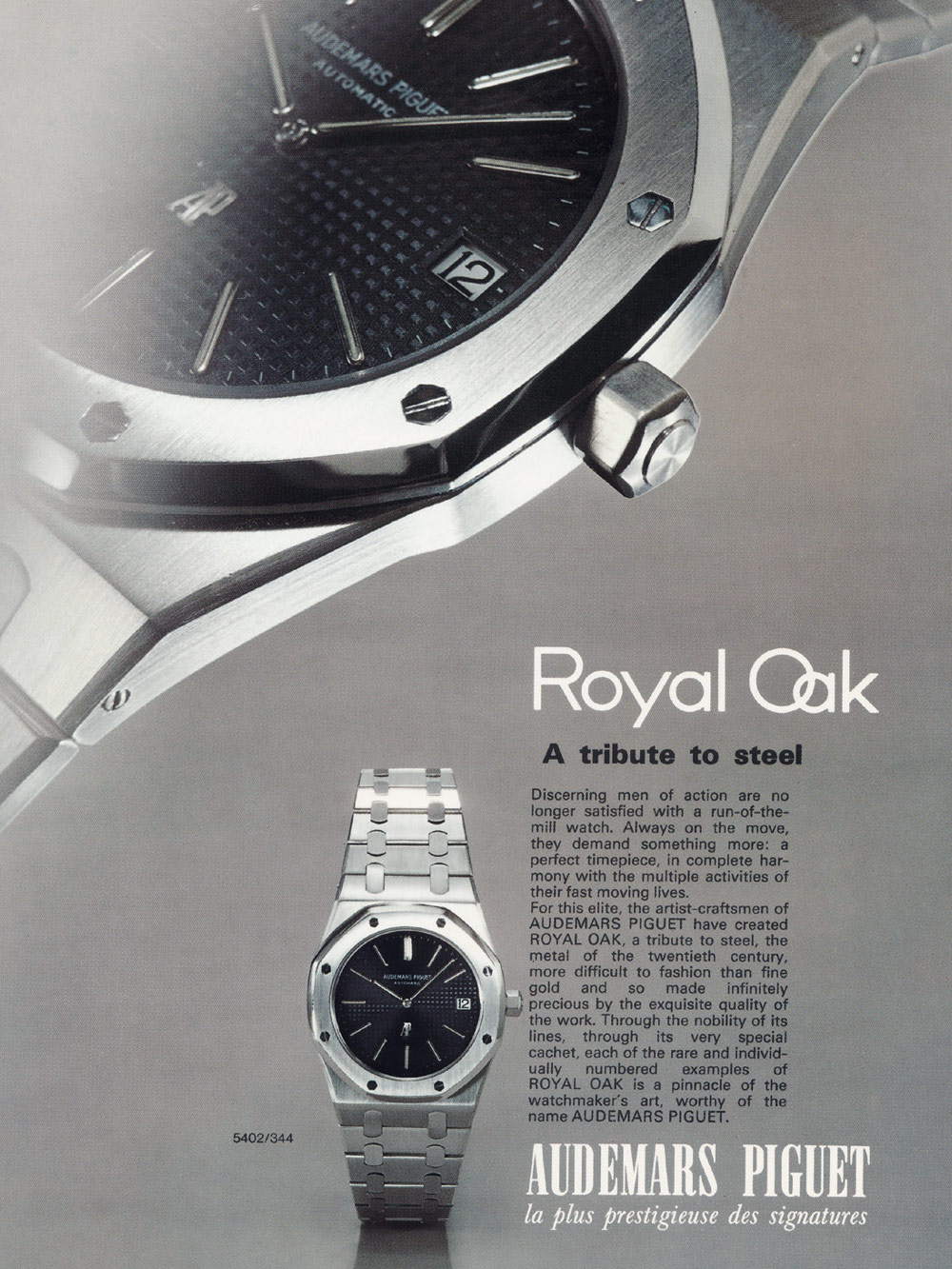 The Jumbo remained untouched until 1992 when, to celebrate 20 years of the Ref. 5402 (and end a 10- year absence of the Jumbo from AP’s line-up) the watchmaker released a thicker, anniversary limited edition, the Ref. 14802, which added a display caseback to proceedings. Which they immediately backtracked on with the non-limited Ref. 15002, replacing the solid caseback and thinning things out again. The main difference though is it brought in gold versions and, as 39mm cases were no longer considered huge, started to be called the ‘Extra-Thin’ more often than the Jumbo.

Which brings us to the Royal Oak, the version of the iconic watch that we all know and love: the Ref. 15202. Released in 2000, this added an exhibition caseback like the Ref. 14802, but maintained its svelte appearance and, more importantly, the same two-hand calibre 2121 that was first used in Genta’s original Royal Oak. In fact, it got more authentic in 2012, when the logo (that when it was released in 2000 was at 12 o’clock) was moved back to six o’clock, making them virtually identical to the Ref. 5402.

To this day, the Ref. 15202 is the spitting image of its 1972 ancestor, a practically untouched artefact and, while Audemars Piguet have expanded here and there, with larger or smaller variants, it’s the 39mm, plain dialled versions that are what you, me and most AP lovers want. That was all until last year, when soon-to-be-ex-CEO of Audemars Piguet CEO François-Henry Bennahmias announced that the lifespan of the 15202 was over, that the collectors’ darling would be replaced. 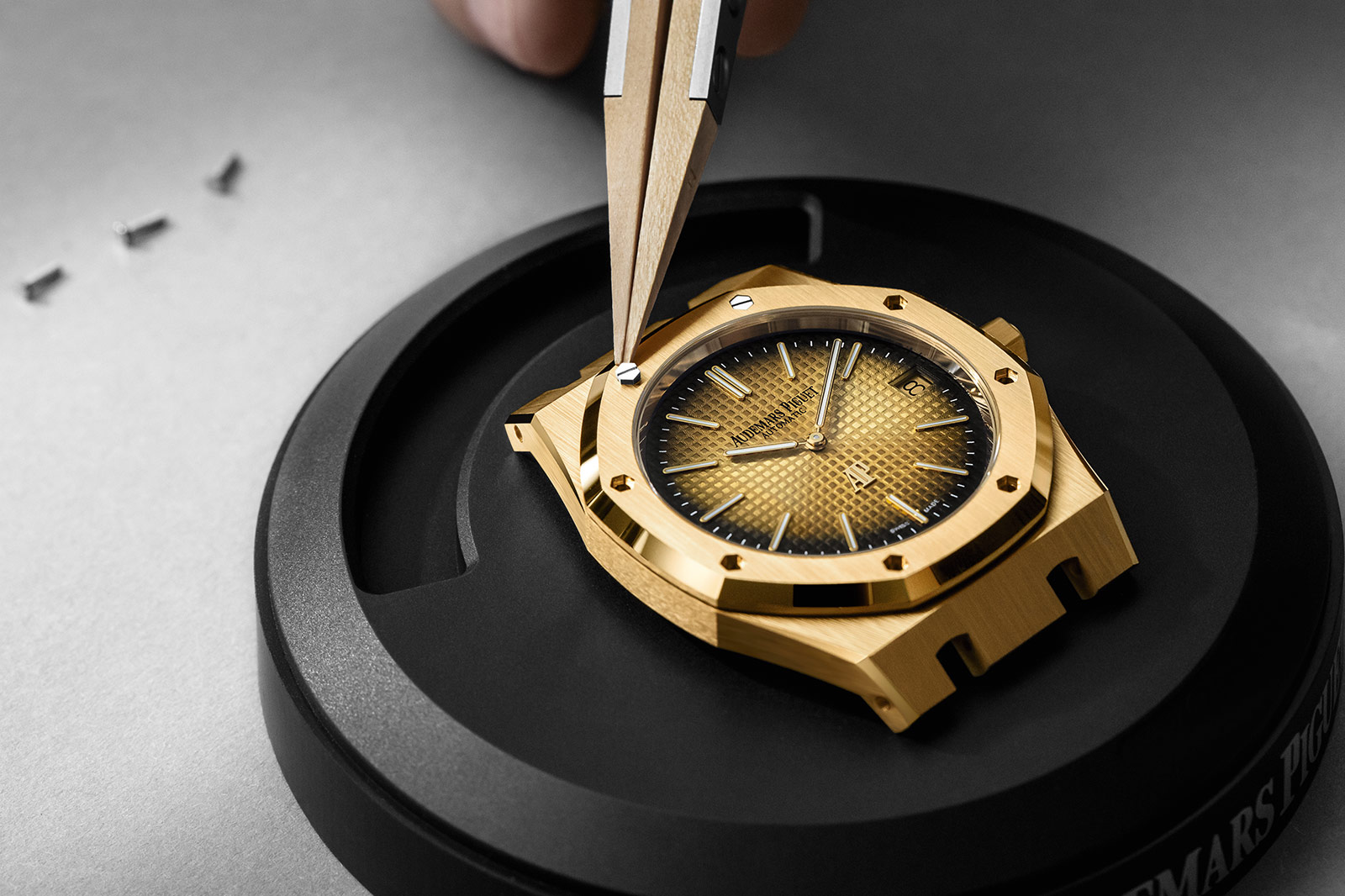 Our Five Favourite Versions of the Ref. 15202

Yes, the Ref. 16202 is lovely and an apt evolution of the Jumbo, but it’s the end of an era, and one we’re a little sad to see go. So, to salve our nostalgic souls a little, let’s take a look at five versions of the iconic 15202 that encapsulate just why it was the most successful luxury sports watch in history. 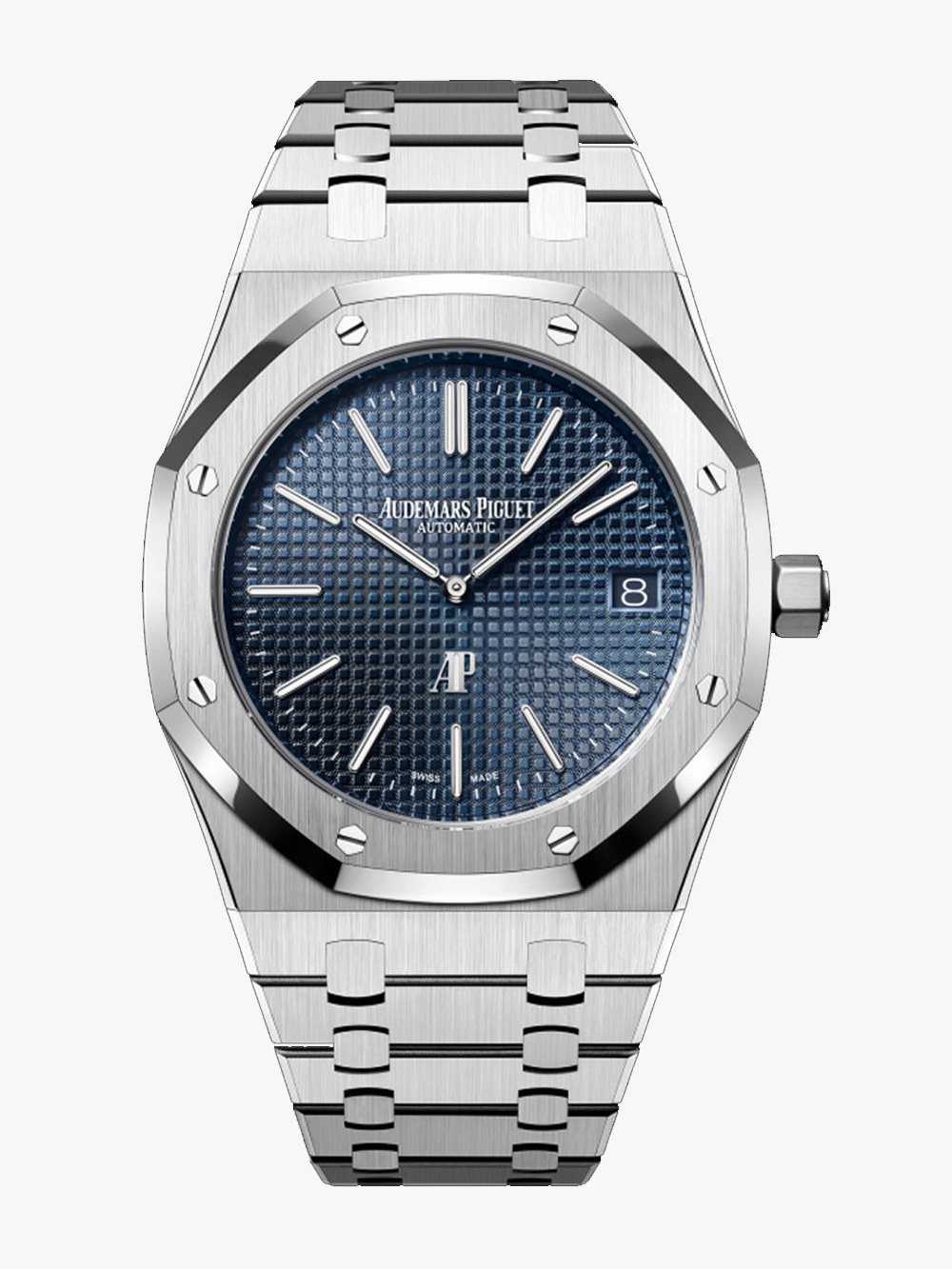 The steel case and Bleu Nuit, Nuage 50 dial was, when it was released in 2000, the spiritual successor to the first 5402ST, the original luxury steel sports watch. It’s a classic and the Royal Oak that any devout collector wants to add to their collection. It was unobtainable before this year and god only knows what it’ll be like on the preowned market now. Its replacement is still just as authentically Audemars Piguet, but the retirement of the 15202ST is a melancholic thing. 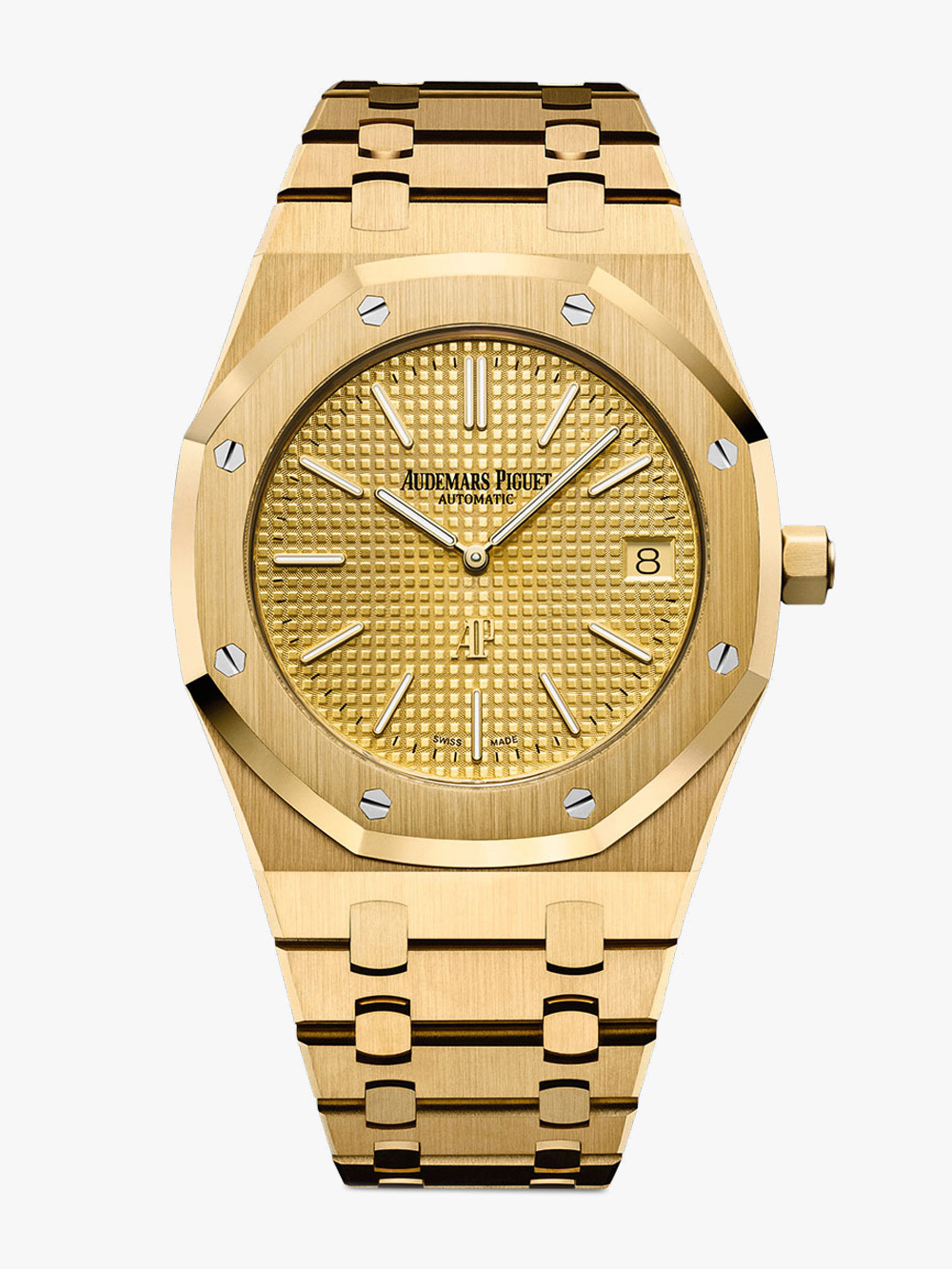 AP were ahead of the curve in two respects with this 2015 release. First, it was a boutique edition, something that’s far more commonplace now than it was seven years back. Secondly, it has a dial that’s such a dark green it almost looks black. Green’s everywhere now, but then much less so. Throw in that only 50 of these pieces were made for Singaporean retailer, The Hour Glass, complete with a custom rotor, and you have one of the rarest 15202s outside of Only Watch. 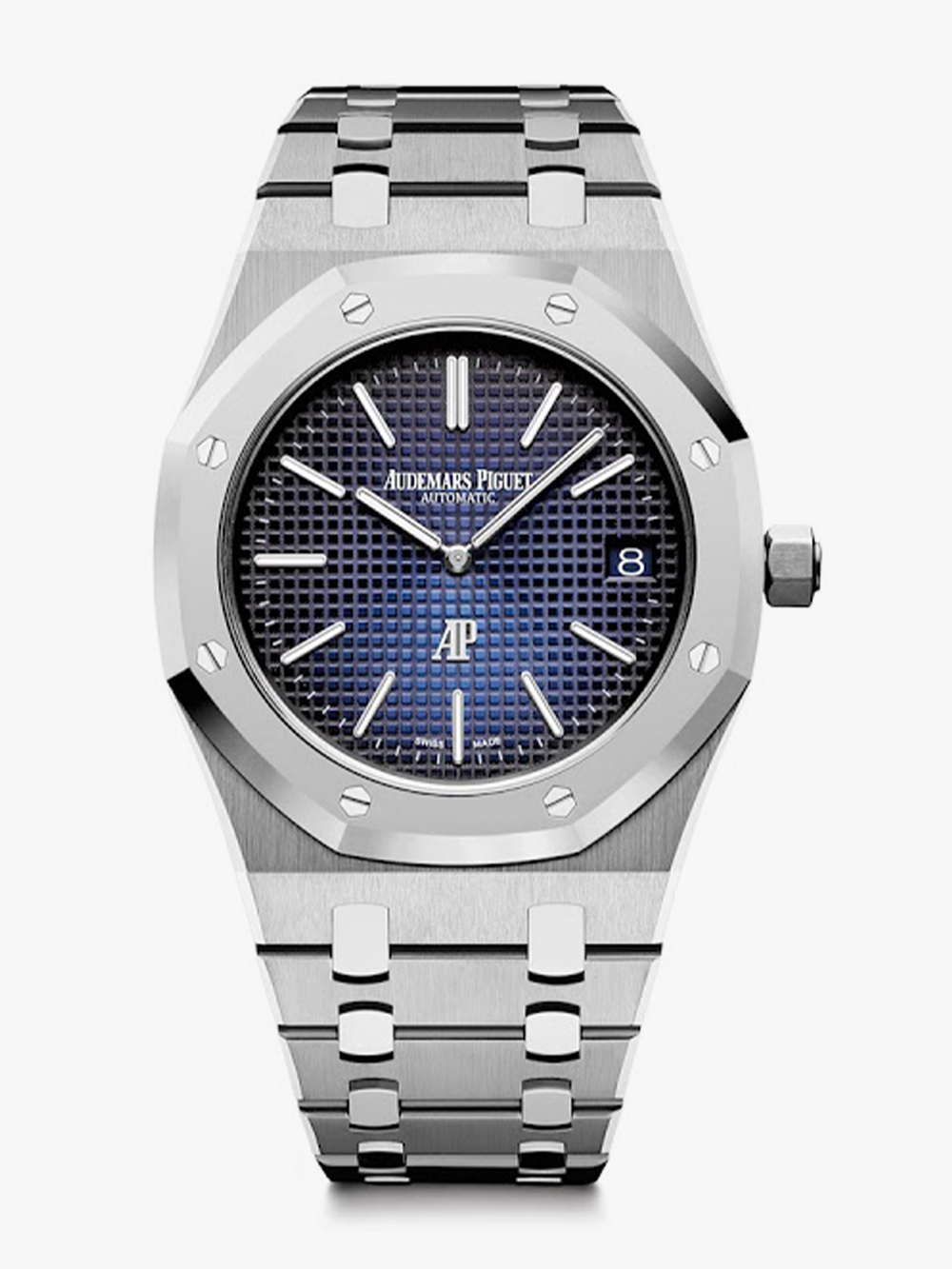 Not only does this 2017 250-piece limited edition offer a lightweight, durable titanium case – essentially a thematic evolution of the luxury steel sports watch – it caps said case with a polished platinum bezel. Yes, that undercuts the point a little, but boy is it a beauty. The mix of brushed and polished finishes – and the flight colour differences in the metals – makes for a more nuanced look. Paired with a handsome blue dial, it’s as if the 15202ST looked in a mirror and thougth, ‘I can do better’. 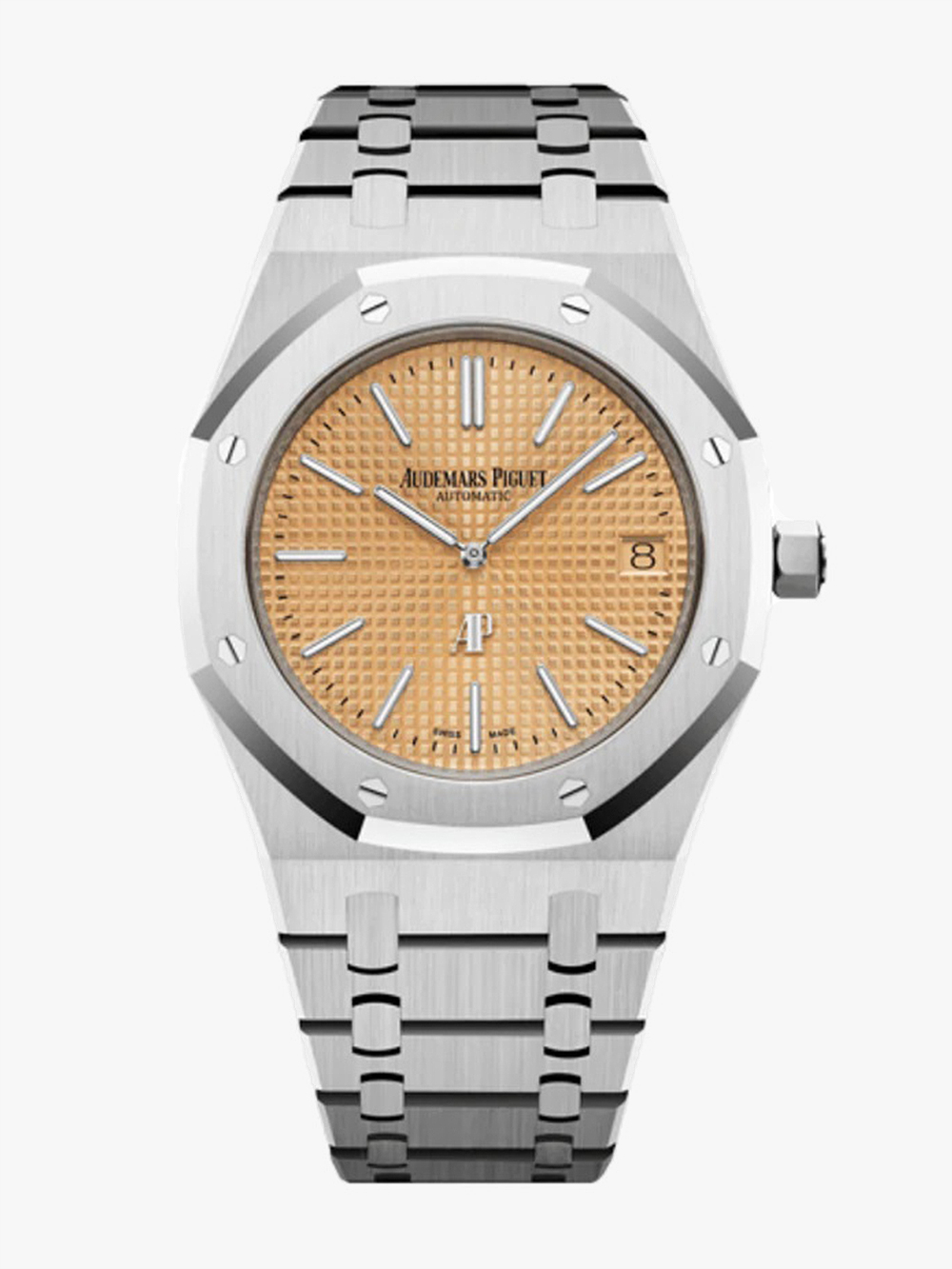 As a refresher, ST obviously means steel, OR is rose gold, PT is platinum and BA is yellow gold. That of course leaves BC as white gold, which is what we have in this 2019 release. But honestly, the case of this boutique edition wasn’t the stand-out aspect, it’s all about that salmon dial. It’s absolutely magnificent and the rose gold colouring shows off the Petite Tapisserie to the full. As a very limited production (around 75 per year) boutique edition, it’s also a rarity. 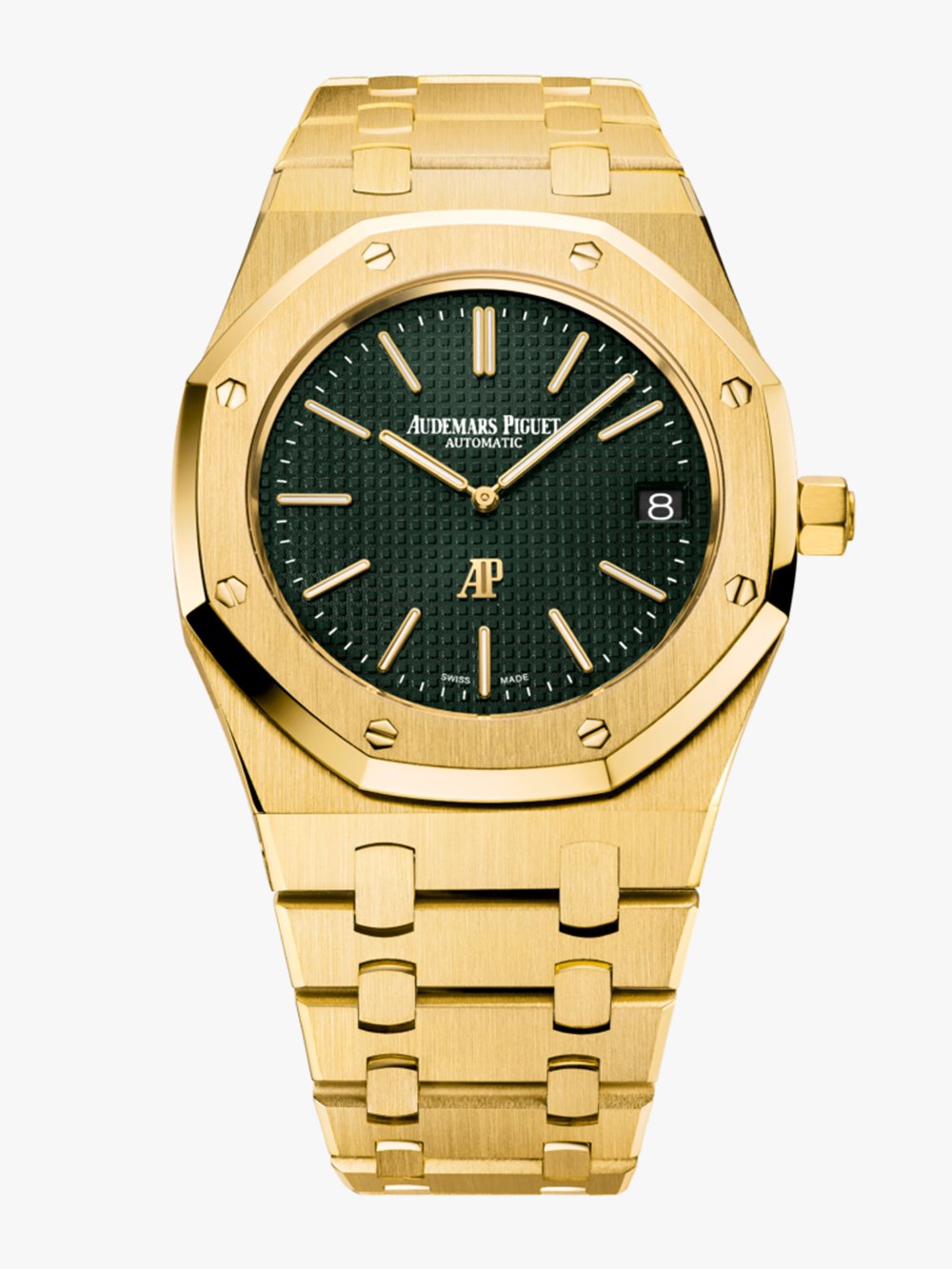 Reintroduced back in 2017, this is a statement piece if ever there was one, and the 15202BA with both a gold case and matching dial is a monochromatic beauty. Even the date window is coloured to match. Much as I love the new, fume replacement for it, there’s something to be said for the pure tone-ontone look, as true for this as it’s always been for the Rolex President. Though honestly, if I saw any president wearing this I’d have to worry a bit about corruption… it’s not exactly subtle.