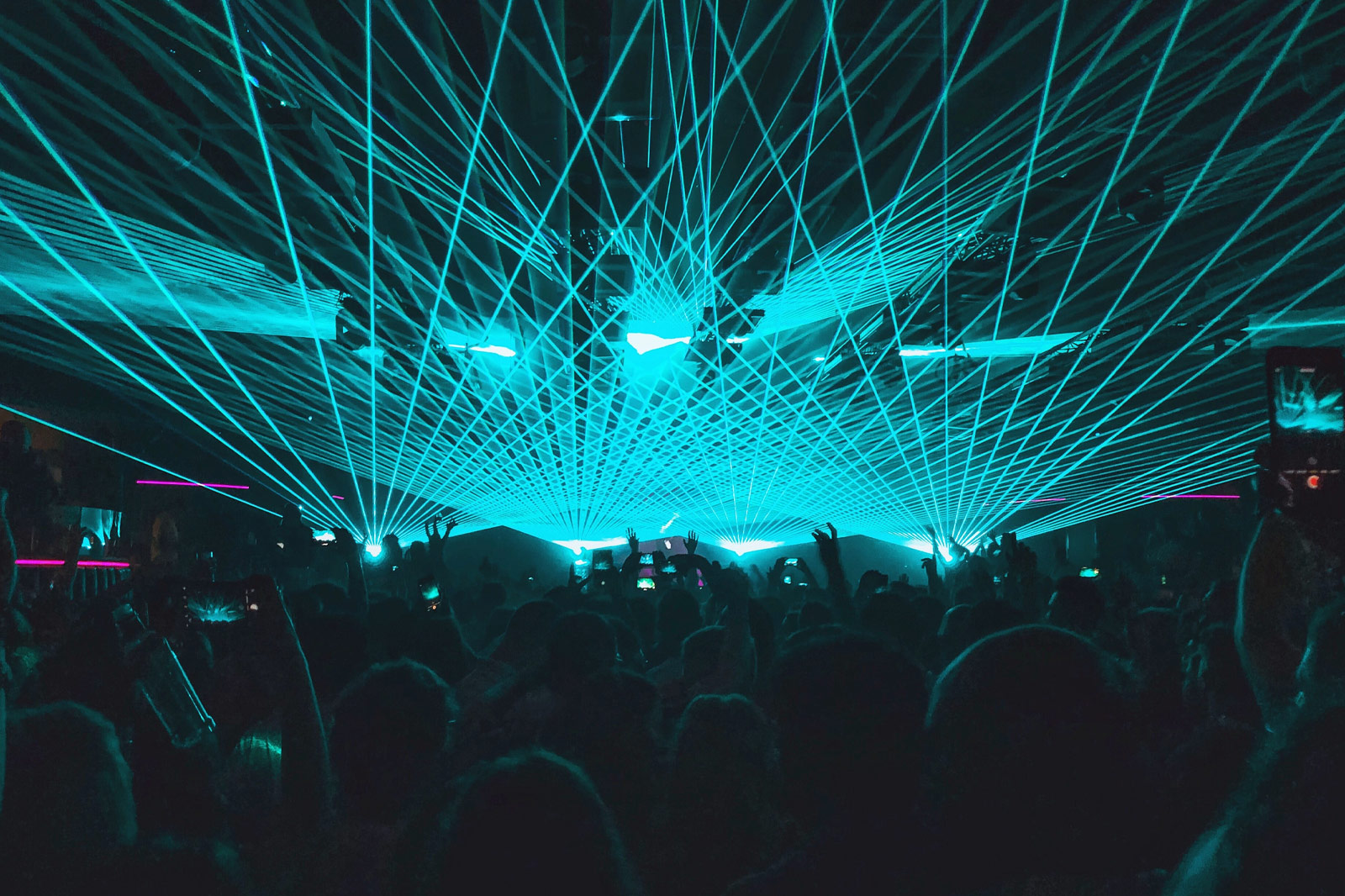 Baggy dungarees, bucket hats, and tie-dye technicolour madness. Looking back at the ecstasy-fuelled acid house rave fashion choices of ravers in the late 1980s and early ‘90s, you might struggle to spot a link between this hedonistic youth movement and the clothes hanging in your own wardrobe. But there is one.

The acid-house scene changed a lot in a relatively short space of time. It was more than simply a subculture; it was an overarching movement that brought people from all walks of life together. It didn’t matter if you were a punk, a football hooligan, black, white, gay, straight or otherwise – everyone was there to do one thing: dance. And with serotonin levels through the roof thanks to those little magic pills, an energy of love and unity proliferated.

It was a transformative time that changed the cultural habits of a generation. Boundaries were broken down, new paradigms established, and club culture was rebuilt from the ground up. But the scene’s influence didn’t stop there. It’s less talked about, but look at the sartorial landscape pre and post acid house and you’ll notice a fundamental change in the way that people dress; a change that’s still being felt today. 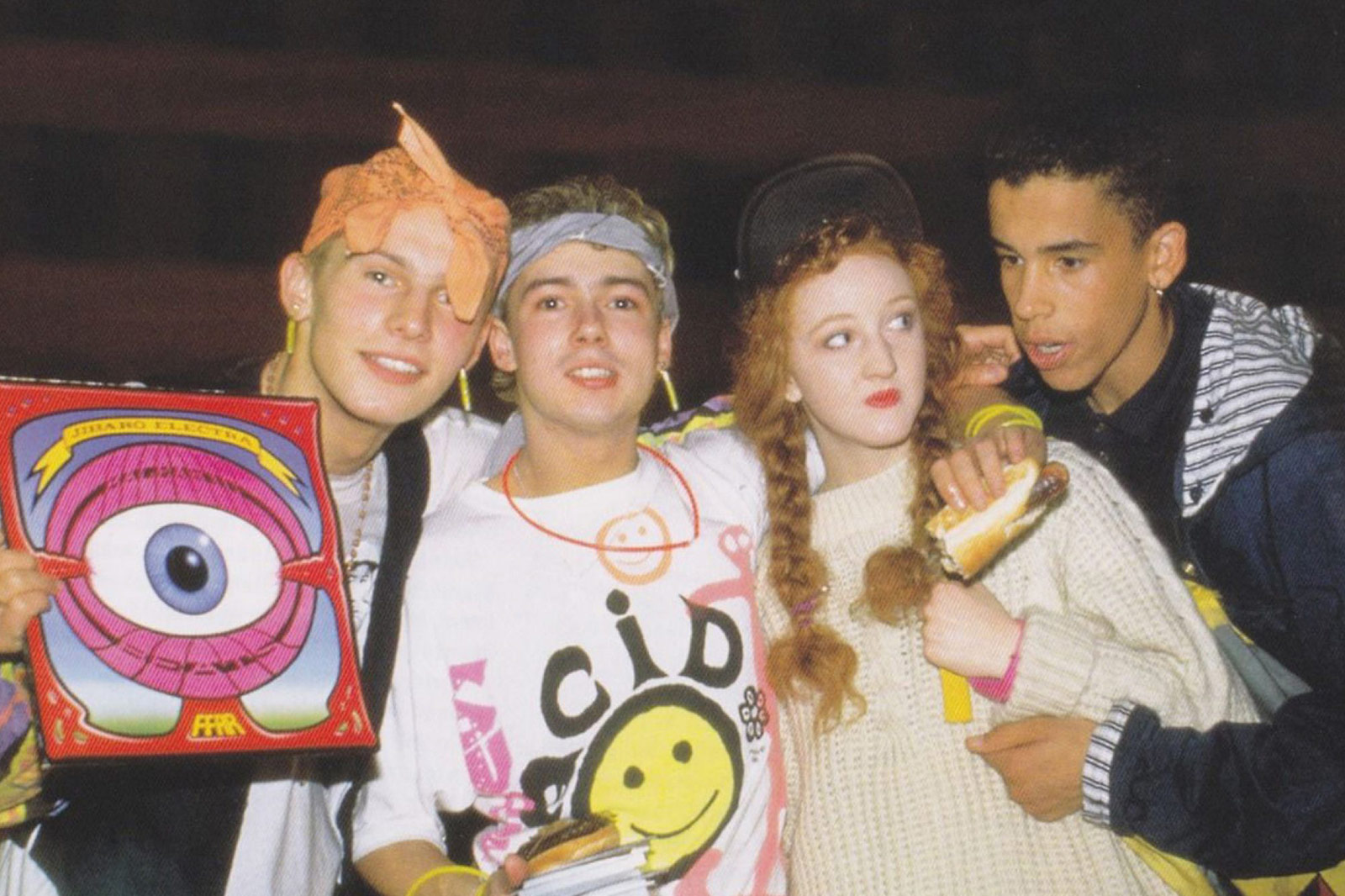 In the mid-1980s, a new style of music began to creep into DJ sets at nightclubs and parties in the UK. Typified by energetic beats, squelching basslines, euphoric piano stabs, and sampled vocals, this new genre, dubbed acid house, became the soundtrack to the most seismic youth-culture revolution since the sixties: a second Summer of Love.

On its own, the music was exciting enough, but when combined with the arrival of ecstasy – a new drug that would keep people dancing, hugging and gurning into the small hours and beyond – it became something else entirely.

“Ecstasy intensified the experience and also meant the crowd were pretty responsive to dancing to music they had not heard before, which was very liberating,” says author and former acid-house DJ Dave Haslam in Luke Bainbridge’s 2013 book, The True Story of Acid House. “Although sometimes I think you could have played a recording of a Hoover and 2,000 people would have screamed with joy. 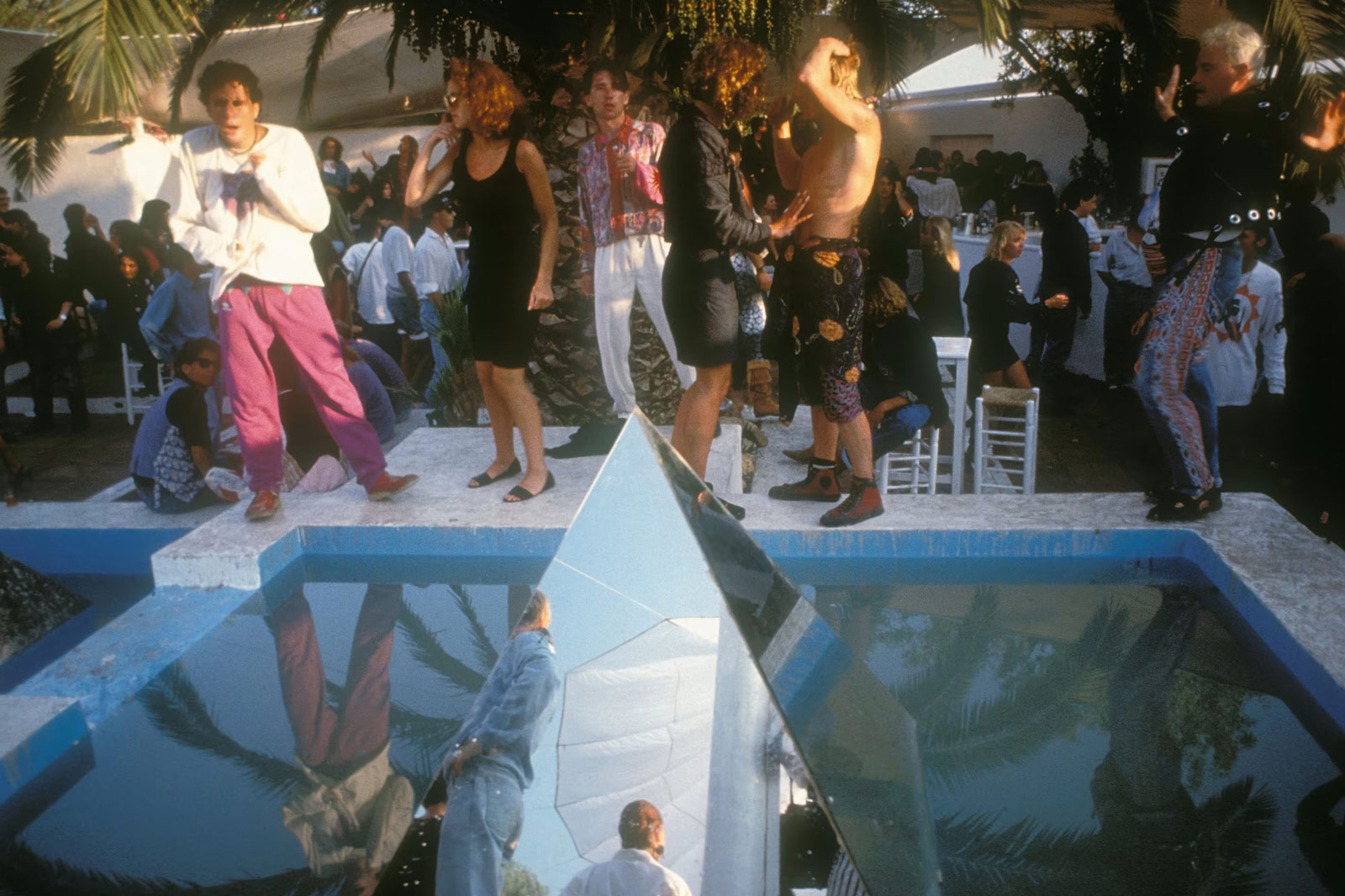 “When you DJ you’re mostly faced with a crowd waiting to be entertained and it’s your challenge to whip them up into a frenzy. But that early acid house era was different; you were faced with 2,000 baying people on the verge of such euphoria their heads were almost exploding. You almost felt like you had to hold them back a bit, like someone trying to guide wild horses.”

During the summer of 1988, acid house transformed from a fringe movement, involving small pockets of clued-up clubbers in London and Manchester, into an explosive nationwide cultural phenomenon that saw tens-of-thousands of loved-up ravers packing out clubs, abandoned warehouses, basements, and fields.

The partygoers came from far and wide, which meant there were lots of different fashions on display, particularly in the early days. At the Haçienda, the iconic Manchester venue that helped bring acid house to the masses via its ‘Nude’ club night, people were still rocking up in suits with shoulder pads as late as early 1988. But as the scene grew, a more relaxed way of dressing took over.

“Clothes became a way to nonverbally communicate to like-minded people once you were outside of a club or a rave,” explains Manchester-based DJ, brand consultant and content creator Neil Summers. “In the early days, being a raver was like being part of a secret society, so glimpsing a small smiley badge or a Berghaus fleece would often let you know you were talking to a fellow devotee.”

From the summer of 1988 onwards, relaxed fits, European labels and bright colours spread throughout the crowds like wildfire. Loose and comfortable, these were clothes to be danced in, and were in stark contrast to the suits and shirts people were wearing to nightclubs just a year earlier. “In 1988 I was wearing baggy white tees, coach jackets, chambray shirts, vintage Levi’s 501s or dungarees and Converse Chucks,” says Summers.

“Then in 1989, denim went white (or flared) and tops got looser. European/ French labels became a thing too, with the likes of Chipie, Lacoste, Naf Naf, Palladium, and Chevignon all being very popular. After that, things went a little more American sportswear, with Russel Athletic and Champion sweatshirts. Trainers also became a much bigger focus. Adidas Torsions, Superstars, and Nike Cortez were some of the most popular models.” 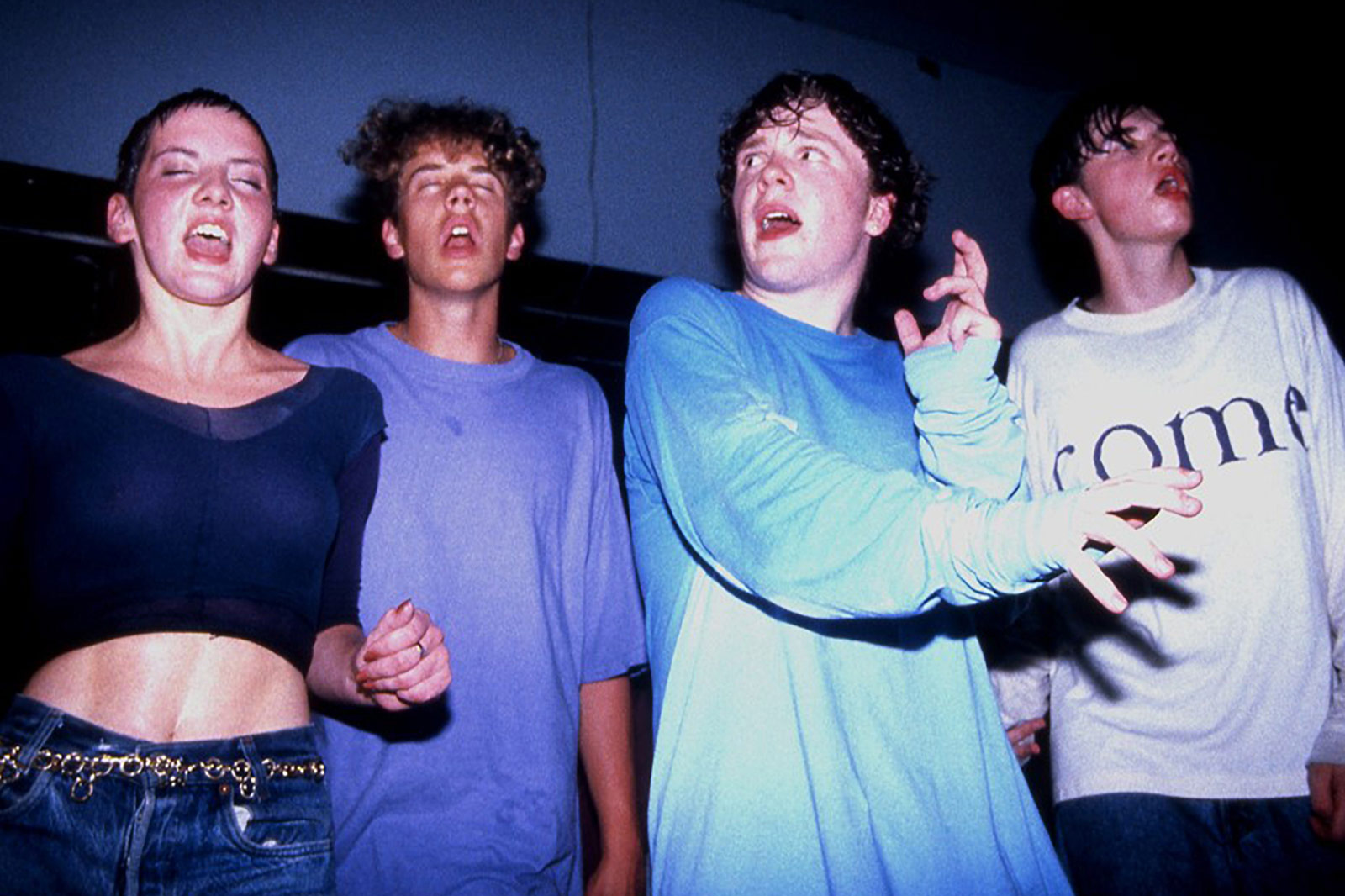 Obviously, the clothes were a part of it, but perhaps to a much lesser degree than in some other youth movements. The inclusive nature of ecstasy meant that in addition to the barriers of race, class, sexual orientation and gender coming down, so too did sartorial barriers.

“People would be more inclined to tell you that they liked what you wore,” said Summers. “But in the grand scheme of having the best night of your life in a room full of equally loved-up people, what you were wearing really wasn’t that important.”

The clothes may not have seemed overly important at the time, but looking back it’s clear to see the impact this era had on the way people dress. Acid house and ecstasy brought a carefree attitude to the culture that bled into fashion for generations to come. Over the past few decades, we’ve seen dress codes erode beyond recognition compared to what they were 30 years ago, and acid house was one of the catalysts that set this process in motion. 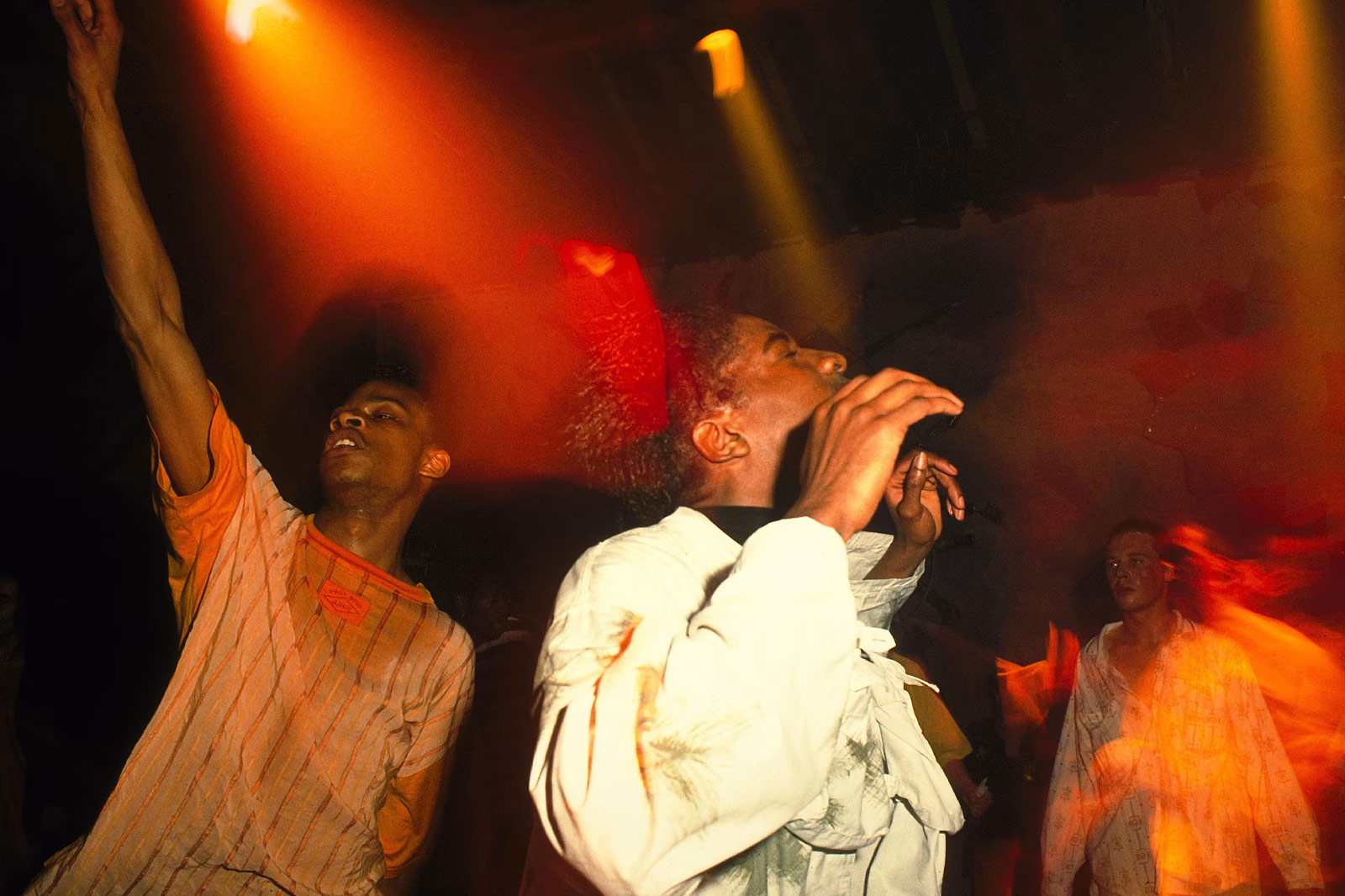 Ultimately, the scene fell apart. Media hysteria, new government legislation prohibiting mass gatherings, and widespread police crackdowns all played a part. Acid house had become too big for its own good, and people eventually moved on. But even after the dust had settled, the unofficial uniform remained. Clothing designed to be worn for sport and leisure was now the norm. Trainers replaced shoes and heels, and baggy sweats replaced shirts and blouses.

“Before rave music there was still a formality to fashion that no longer exists now,” said Summers. “People get married wearing trainers, go to work in tracksuits, and buy clothes designed or endorsed by their favourite DJs and musicians.”

It’s something to think about the next time you breeze past a nightclub bouncer clad in a T-shirt and trainers, or when you rock up at the office in a hoodie. Had it not been for acid house, there’s every chance you’d be getting turned away at the door.

Paddy Maddison is a freelance menswear journalist with a keen interest in outerwear. When he’s not plotting his next big-coat purchase for the coming winter, he can be found at his desk, typing up words for the likes of The Independent, Esquire, GQ, and Men’s Health. He’s also Style Editor at Ape to Gentleman and a former Contributing Editor at FashionBeans.