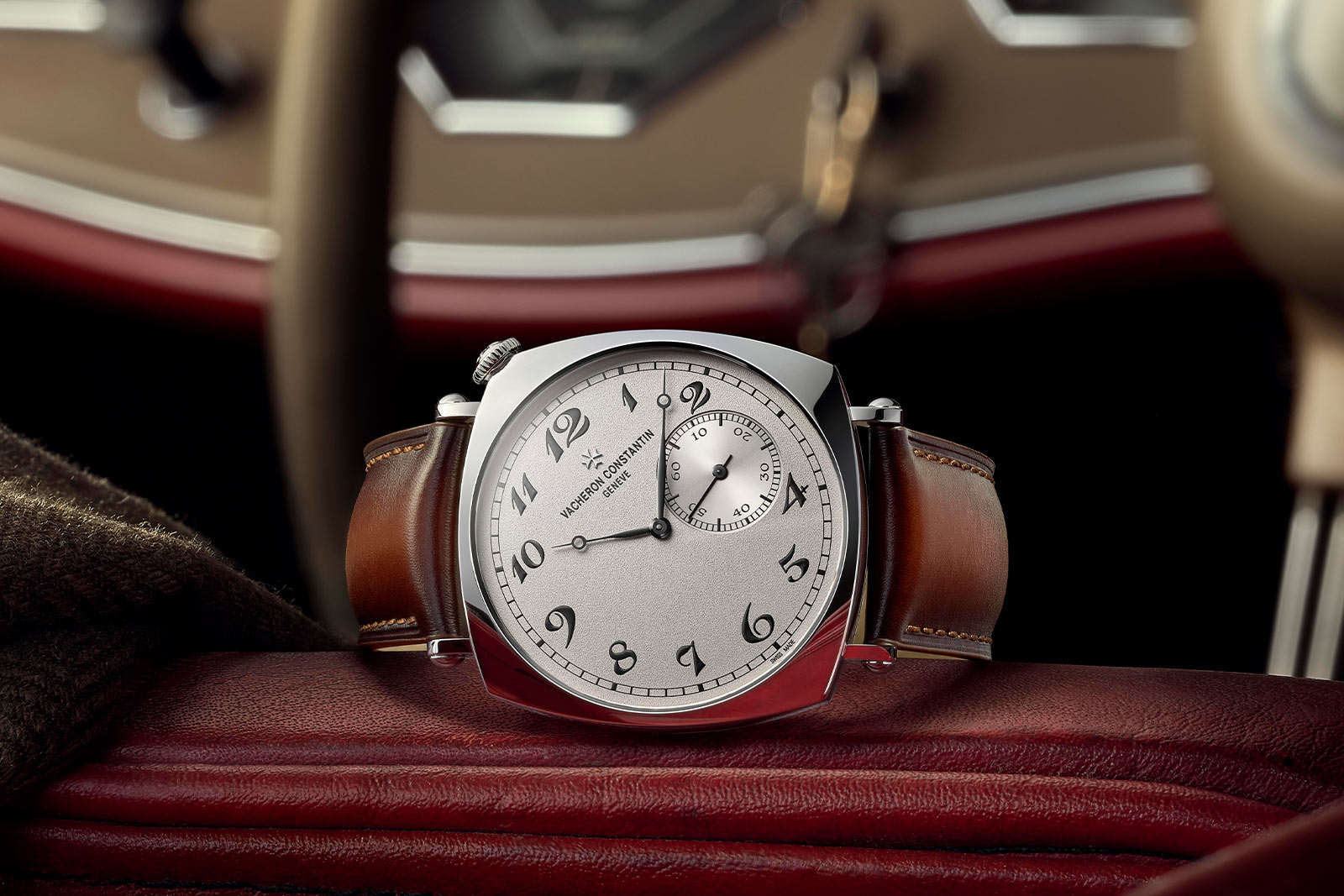 For Christian Selmoni, the Style and Heritage Director at Vacheron Constantin, the American 1921 makes available a classic model that had been lost in the mists of time. The original American 1921 was produced in only 36 examples at the beginning of the 20th century, mostly dedicated to the US market; its rarity assured. It had thus become a ‘unicorn’ model for Vacheron collectors.

“In 2008, we presented the current version of the model – redesigned with size and proportions adapted to today’s client expectations, however faithful to the spirit of the original one,” said Selmoni. “The 2008 re-interpretation received a fantastic welcome and it became a prominent model within the Vacheron Constantin portfolio. As part of the Historiques collection, the American 1921 has always been manufactured in limited quantities, in order to ensure its exclusivity.”

Devotees of the brand know the story, but it is interesting enough to repeat, especially for those curious about the origins of unusual watch designs. The American 1921 was certainly representative of its era, with the automobile on its ascent. The turning of the dial by 45 degrees qualified it for a new genre of sporting timepieces referred to as ‘driving watches’. Many were extreme, with curved cases that almost formed a U, so they could sit on the side of the wrist facing the driver. 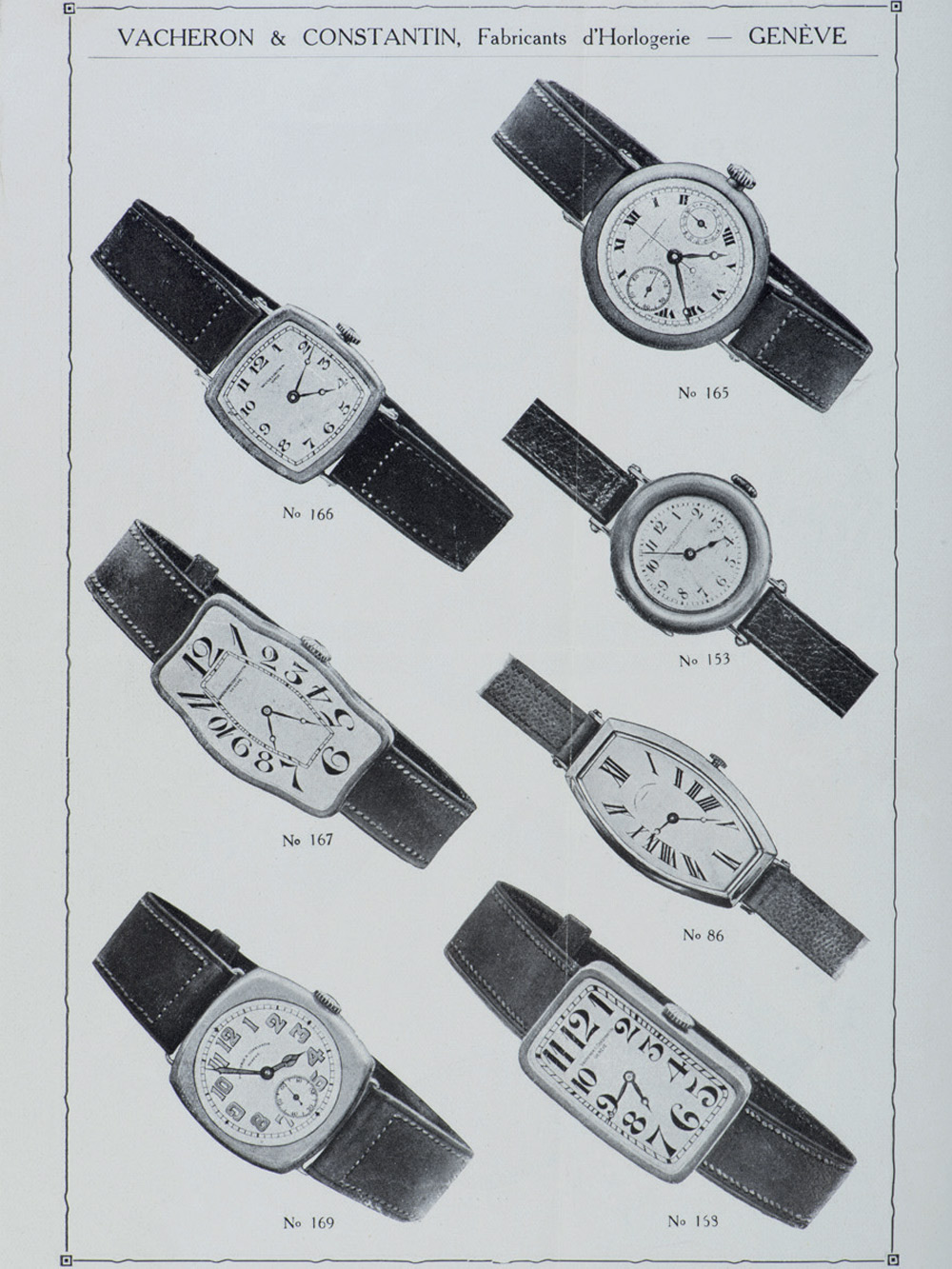 Vacheron’s solution, however, allowed the driver to glance at the watch without taking his or her eyes off the road, but with the comfort of a regular watch. Because the case was a cushion rather than an extreme ‘curvex’, the original could be worn whatever the occasion. Conceived in 1919, the first edition was a favourite of American writer and clergyman Samuel Parkes-Cadman, a Vacheron Constantin client of note.

Parkes-Cadman represented a type of gentleman, a Renaissance Man, who lived a full life bursting with a range of interests. In addition to being an early adopter of the automobile, he was precisely the ideal customer for the watch for his other pursuits: an early champion of racial equality, including the fight against anti-Semitism, and a pioneering clergyman who broadcast his sermons to his listeners via the then new means of radio. Amusingly, Vacheron Constantin’s researchers noted another function for the angled dial. It allowed Parkes-Cadman “to read the time easily and discreetly while preaching”. 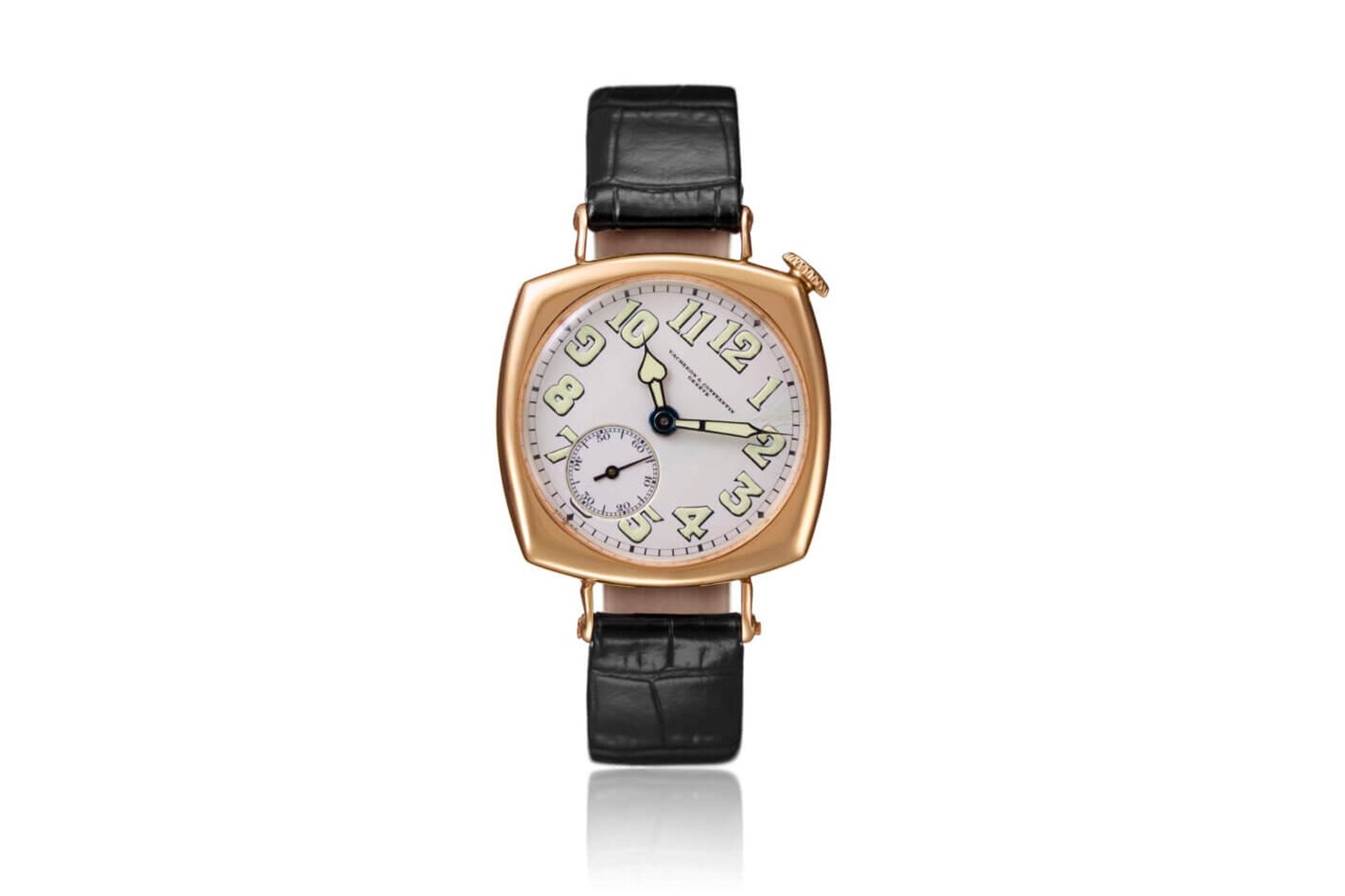 Trawling through the Vacheron Constantin archives, the researchers unearthed the origins of this distinctive wristwatch. In 1919, the right-angled version was produced in a run of 24 examples. It was housed in a 31.4mm case featuring soldered gold lugs, while the dial featured bold outlined Arabic numerals in black against a white background. The hands were skeletal ‘cathedral’ types, and the crown and 12 were positioned in the upper right-hand corner.

For 1921, Vacheron Constantin changed the dial and shifted both its and the crown’s orientation. The 12 and the crown were moved to the upper left-hand corner, while the bold numerals from 1919 were replaced with more elegant Breguet italics and Breguet ‘half-moon’ hands. This second version was produced in two series of six examples each. 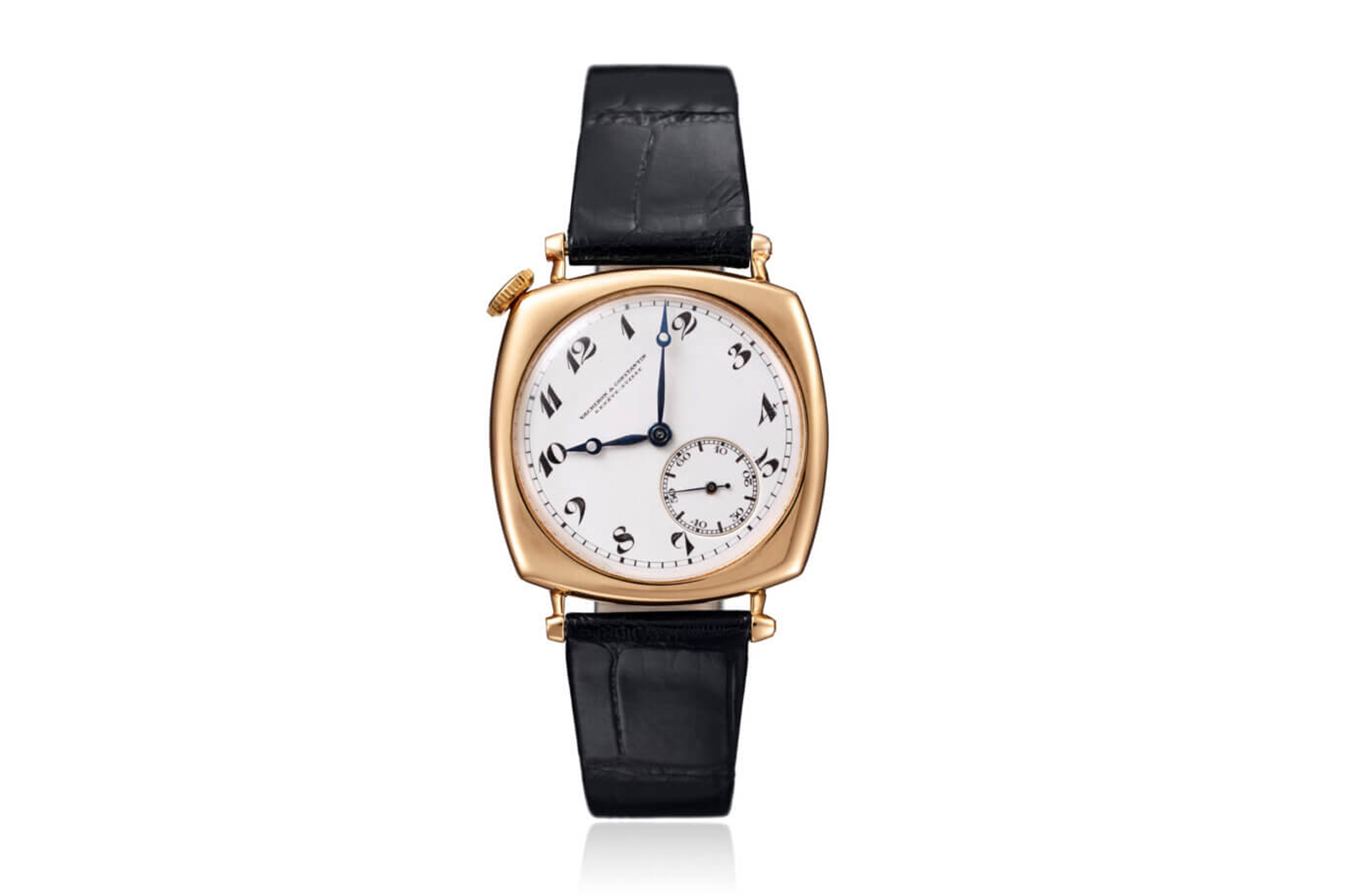 Vacheron has had a lot of fun since reviving the American 1921 in 2008 by confounding collectors through the release of various dial colours and case materials, some even including the swapping of the crown from right to left. The most dominant features of the ‘standard’ American 1921, however, remain the crown at the upper corner of the cushion-shaped case and a dial turned clockwise by 45 degrees, placing the 12 between the spot where the 1 and 2 would be if positioned conventionally.

Its success in 2008 ensured that the American 1921 would maintain a permanent presence in the Vacheron Constantin catalogue. The American 1921’s position in the Historiques collection continues with 2008’s large size model and, as of 2017, a smaller size. In the 13 years since its return, the maison has sustained interest in the American 1921 by producing a series of limited editions, with enough of them having been issued to create a collecting theme of its own.

Among the models introduced since 2008, now found only in auctions or via dealers in pre-owned timepieces, are delightful variants that add interesting twists to the original style. The relaunched time-only model of 2008 was accompanied by a severely restricted perpetual calendar which would also reappear in 2012. Much-coveted is 2010’s pink gold 12-piece edition produced for Italian retailer Pisa, while a version with bold numerals, as in the 1919 version, was recreated for 64 clients sold via the New York boutique. This writer dreams about the 2016 platinum version with blue Breguet numerals and hands against a white dial. 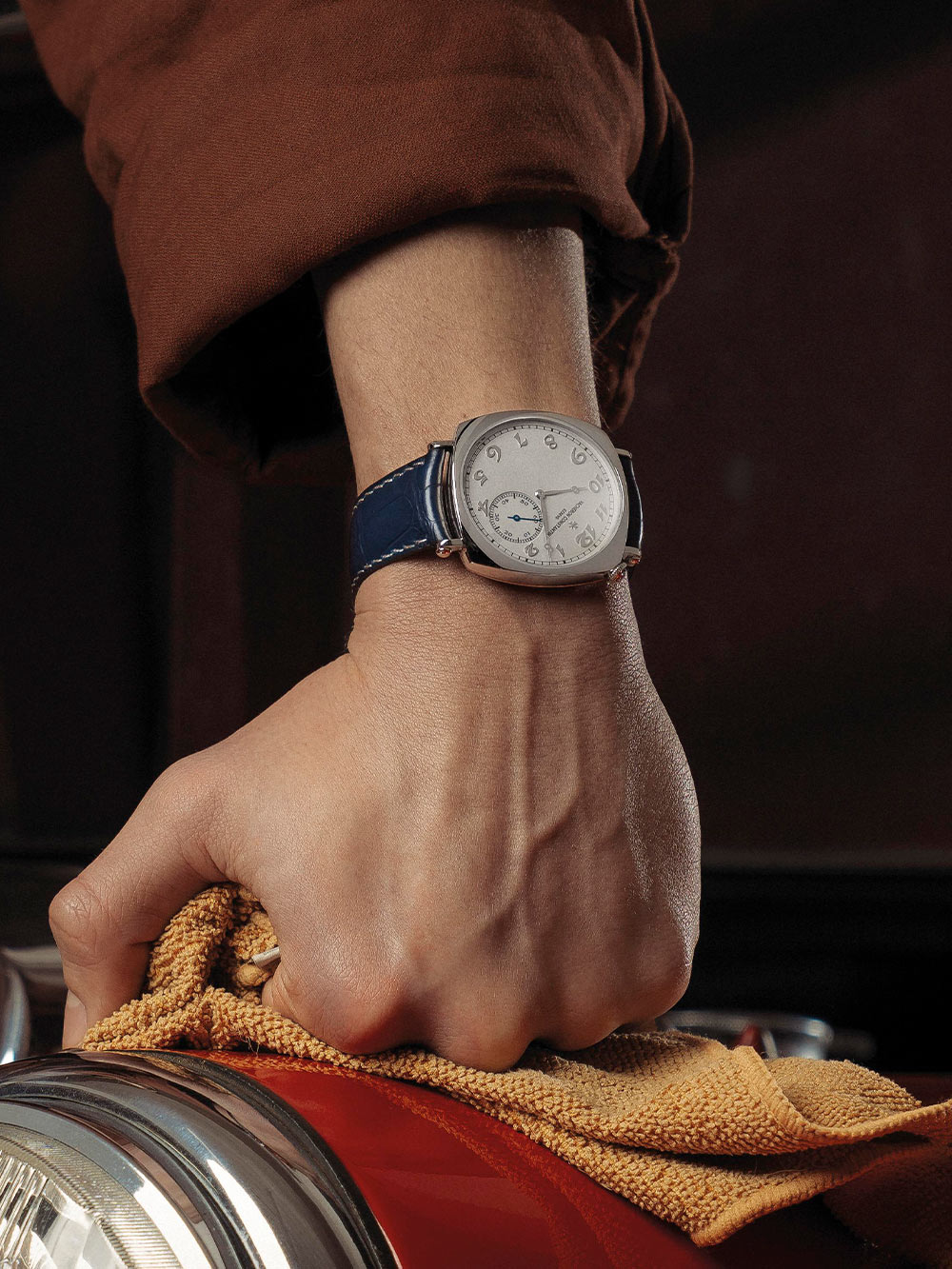 To celebrate the American 1921’s first century, 2021 sees three new models, each powered by the in-house manual-winding Calibre 4400 AS, with small second dials at the 3. This is located in the lower right-hand corner, owing to the shifting of the dial clockwise by 45 degrees. All three wear Breguet numerals, with indication by Breguet hands, recalling the 1921 model but with the orientation to the right.

Two are cased in white gold, with a choice of 40mm and 36.5mm diameters. Their silver dials feature black painted numerals and rail tracks, and are delivered with calf leather straps. The third is from the Collection Excellence Platine, its 40mm platinum case fitted with blue alligator strap. The sand-blasted platinum dial features applied numerals, with hands in white gold. It is limited to 100 examples. 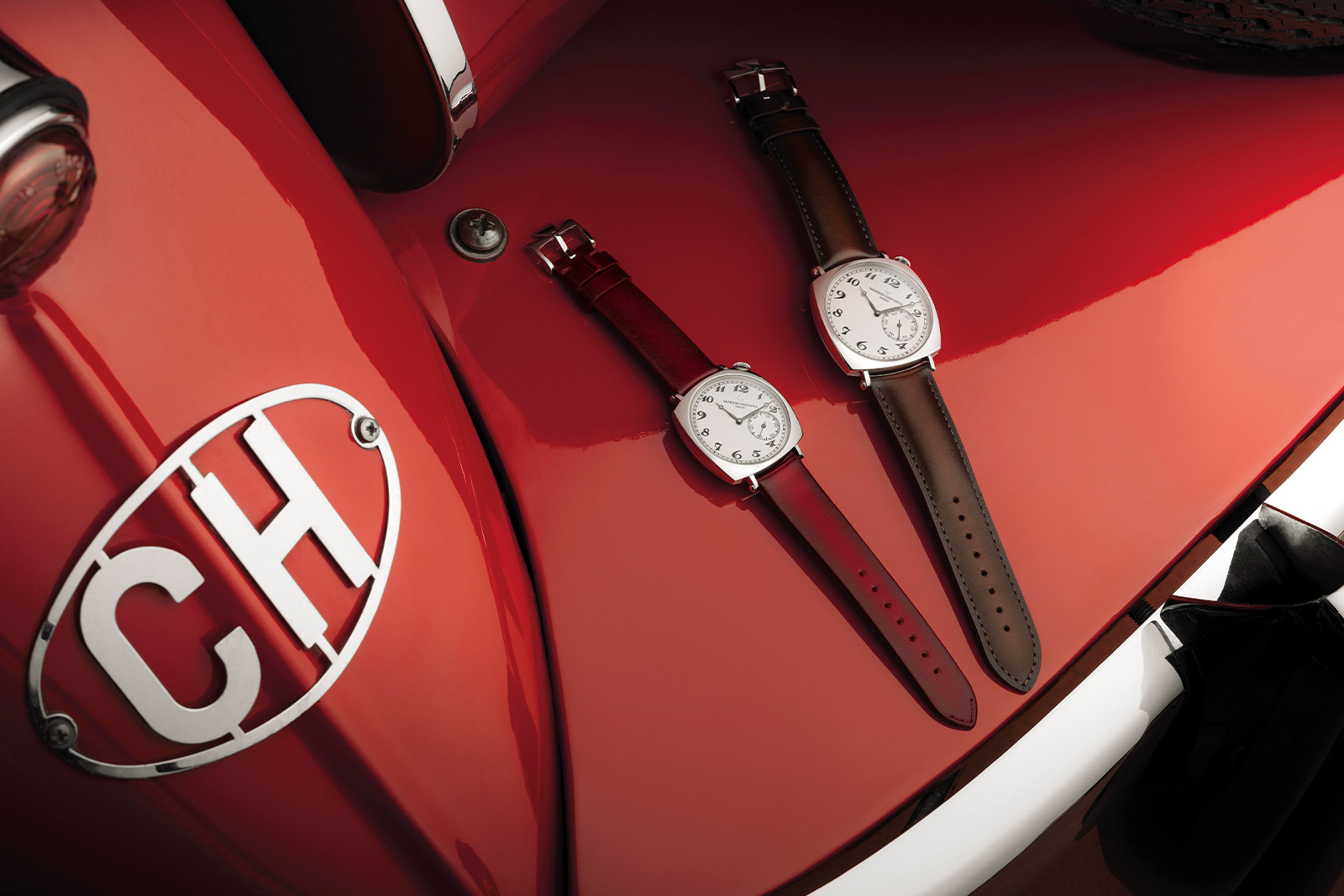 Reissuing classics like the American 1921 can be controversial. In an industry obsessed with novelty, it seems too easy. But for collectors who favour a touch of retro, especially those drawn to a vintage look, Selmoni sympathises. When asked if established watch brands are right to reissue their classic models, he explains, “It makes absolute sense for Vacheron Constantin to revisit its iconic or emblematic models from the past.

“By doing so, we are showcasing that we were creative and innovative decades, if not centuries ago. Such re-editions also demonstrate the consistency of the Vacheron Constantin style: classic, elegant, sophisticated, and in many occasions offering an additional twist. Such is the case of the American 1921.”

Originally of Austro-Hungarian origin, Carl Suchy & Söhne have a distinctive style inspired by...