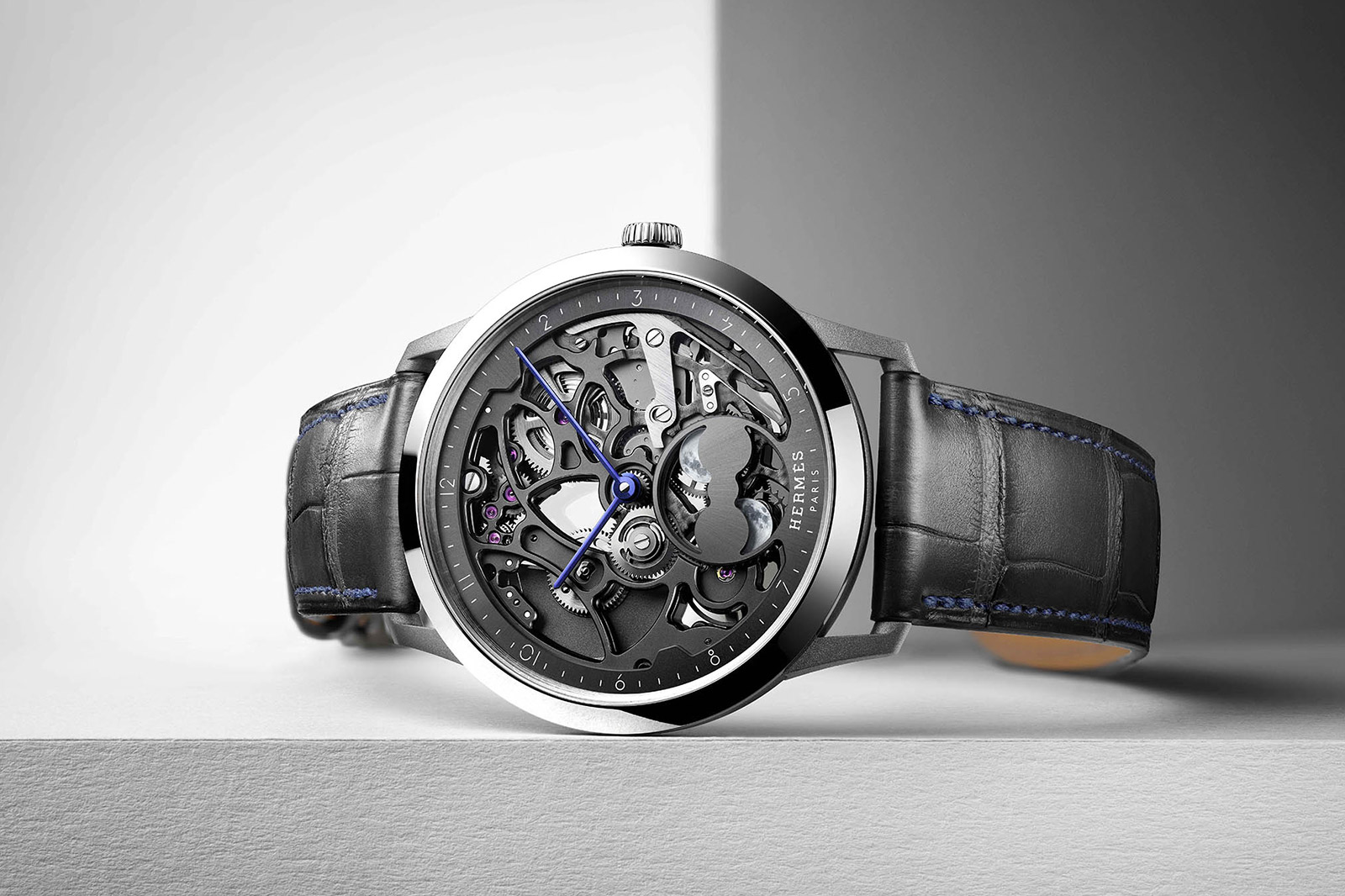 Skeleton watches tend to be the marmite of the watchmaking industry. Some people love seeing all the intricacies of a movement in action, the more bridges and gizmos on display the better, whereas some people find them too illegible and dislike the notion of being able to see all the way through a watch to their wrist below. However, the latest ultra-thin skeleton offering from Hermès, the Squelette Lune, is a timepiece that anyone could love, mixing the skeleton aesthetic with contemplative refinement.

Off the bat I have to say that the Squelette Lune reminds me of the Piaget Polo Skeleton in that it mixes luxury with a pinch of sportiness, which Hermès have achieved through a 39.5mm diameter titanium case that provides excellent durability and light weight wearability. However, it’s well known that titanium is a tricky metal to make look pretty, so Hermès have sidestepped the challenge by giving it a platinum bezel and white gold crown, meaning from the dial side the only visible bits of titanium on the case are the lugs. 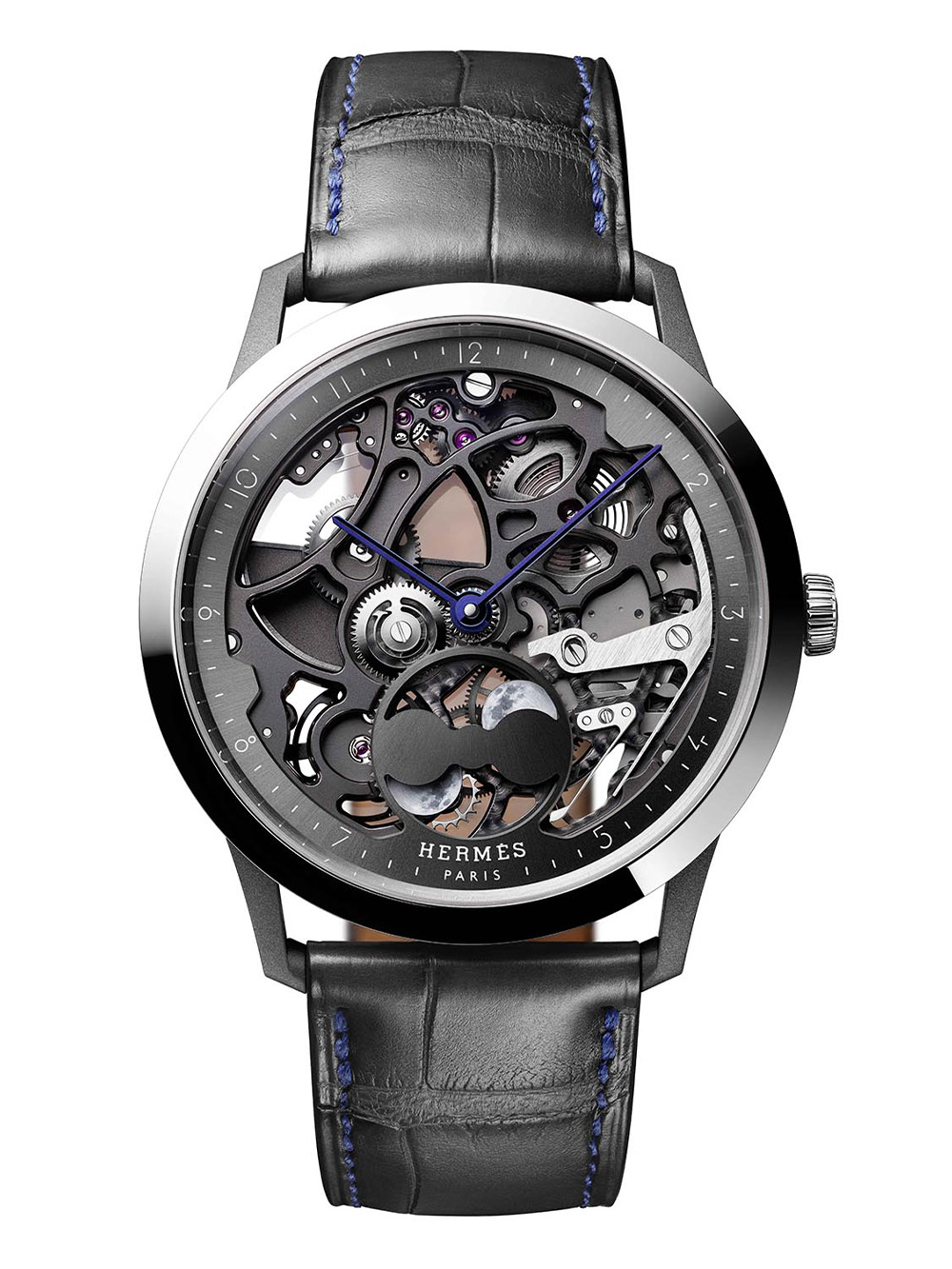 While the combination of materials on the case is a cool feature, the meat of this watch was always going to be its dial, or rather it’s movement. Aesthetically, it avoids the legibility pitfalls that many other skeletons, including the Polo, fall into. The combination of matt and gloss finishes on the dark grey coloured movement provide definition without being distracting and the hands stand out superbly with their blue PVD coating. Another great touch is Hermès’ use of their own font for the numerals, bringing Parisian flair to the typography.

The openwork double moonphase at 6 o’clock also means there is enough going on to warrant a skeleton dial without overwhelming the piece with too many functions. It also provides the watch with its name, Squelette Lune translating to Skeleton Moon. This is not an all action all of the time skeleton, but rather invites contemplation about the processes of time on the scale of your wristwatch and on the scale of a giant celestial orb in the sky. 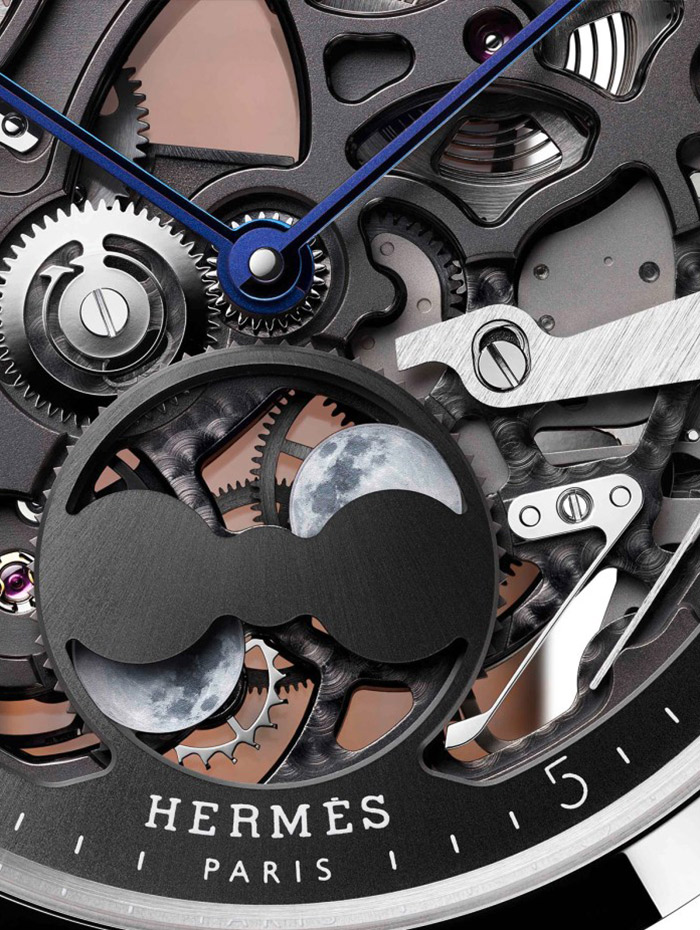 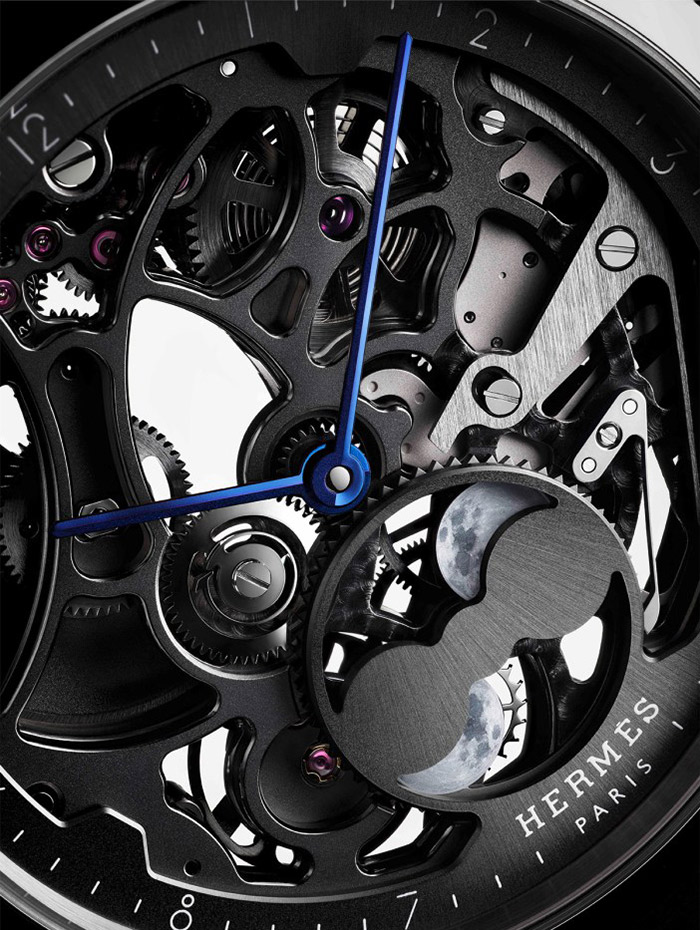 It also happens to be a very solid calibre: the ultra-thin Hermès Manufacture H1953 automatic movement with micro-rotor and a 48-hour power reserve. Micro-rotors are easy to overlook but it’s always nice to see them – they allow you to see more of the calibre through the display caseback whereas regular rotors can obscure a third or more of your view. It’s a small thing but a big quality of life bonus.

The Slim d’Hermès Squelette Lune comes on a graphite coloured alligator strap with blue stitching that matches the central hands. It’s priced at $20,550 (approx. £14,840) which does feel a tad higher than you’d expect but then you remember it’s made from titanium, platinum and gold and the price makes sense. On the whole, I’m a fan, it’s a stylish piece of design from the quirky French marque. A luxurious dial in autumnal hues gives a new look to the off-kilter moon phase. To celebrate their new partnership with Brabus, the Italian heritage watchmaker has gone for... A duo of straps that pay homage to vintage Hermès designs for the cutting-edge series 7. Geneva Watch Days has already witnessed many exciting releases like the return of the Gerald Genta...