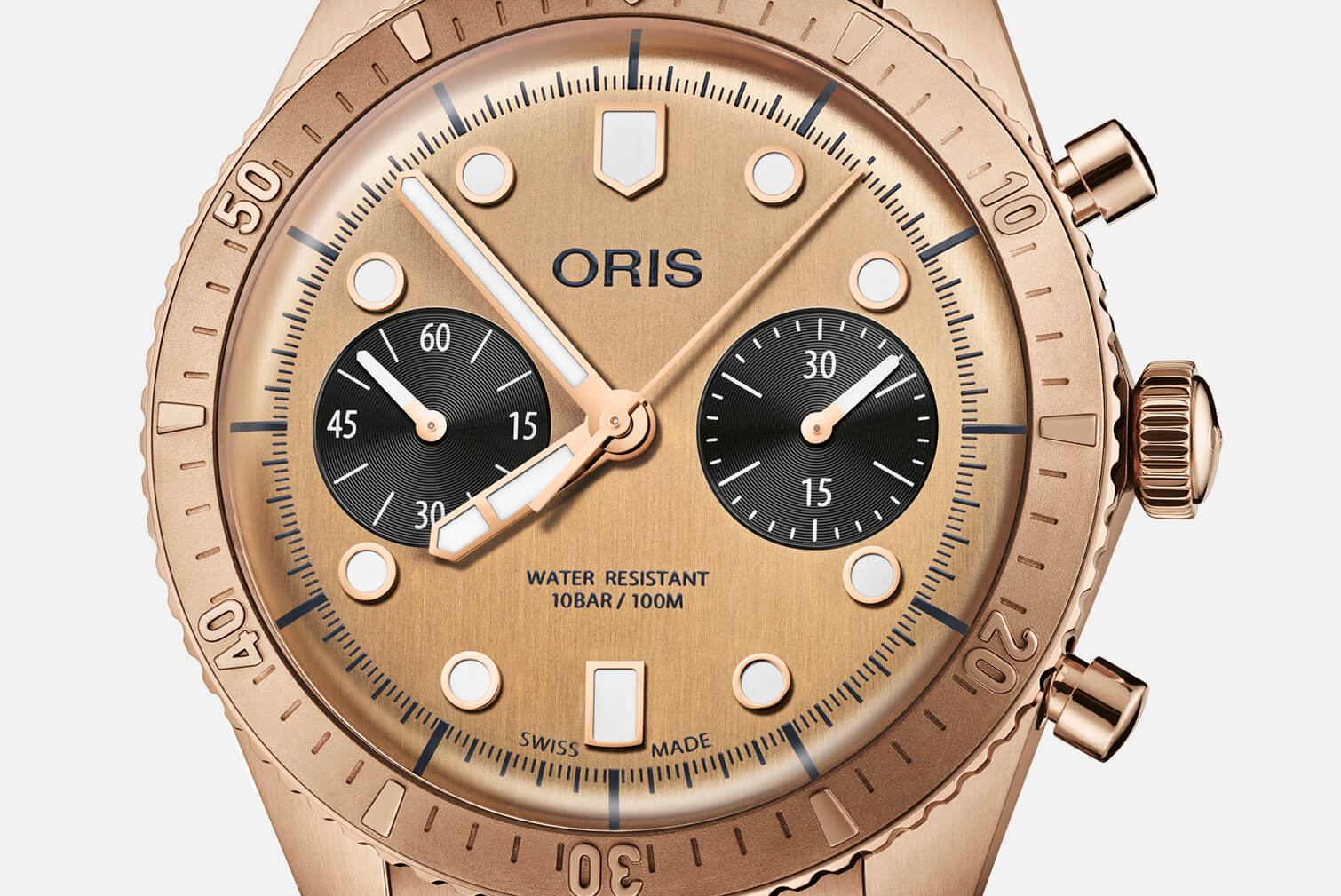 Prediction time. If we make it to the end of 2020 in one piece, and I’m still not entirely convinced that’s a done deal, this Oris will be on more than a handful of lists as one of the best watches of the year. There, the Oracle has spoken.

The Holstein Edition is a limited edition bronze 30-minute chronograph based on the unstoppable, unbeatable Divers Sixty-Five series and I say that full of bias as the proud owner of a blue lacquered dial stainless steel example. So successful has this model been for the watch company from Holstein that it’s probably not exaggeration to suggest it has transformed the business.

It’s a watch that’s difficult not to like, one that ticks a lot of very popular boxes; it’s a vintage-inspired diver, has one of the most balanced, well-designed dials on the market, is eminently affordable and looks great on the wrist. 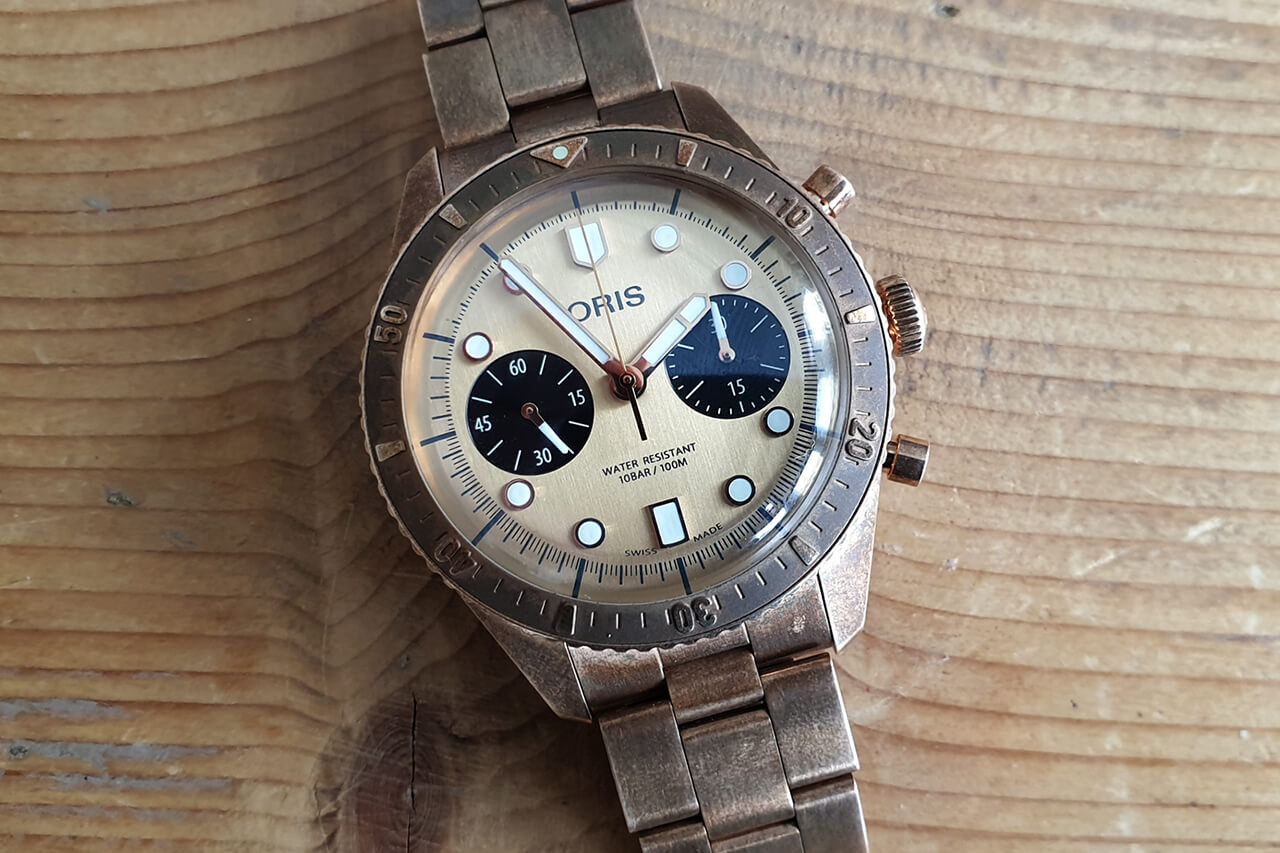 Oris has also had success with bronze watches in the recent past, first with the Divers Sixty-Five watches honouring U.S. Navy master diver Carl Brashear, later within its versatile Big Crown collection and also using the material to produce innovative bimetal watches. This however is the first time the brand has produced a full bronze watch, bracelet included. 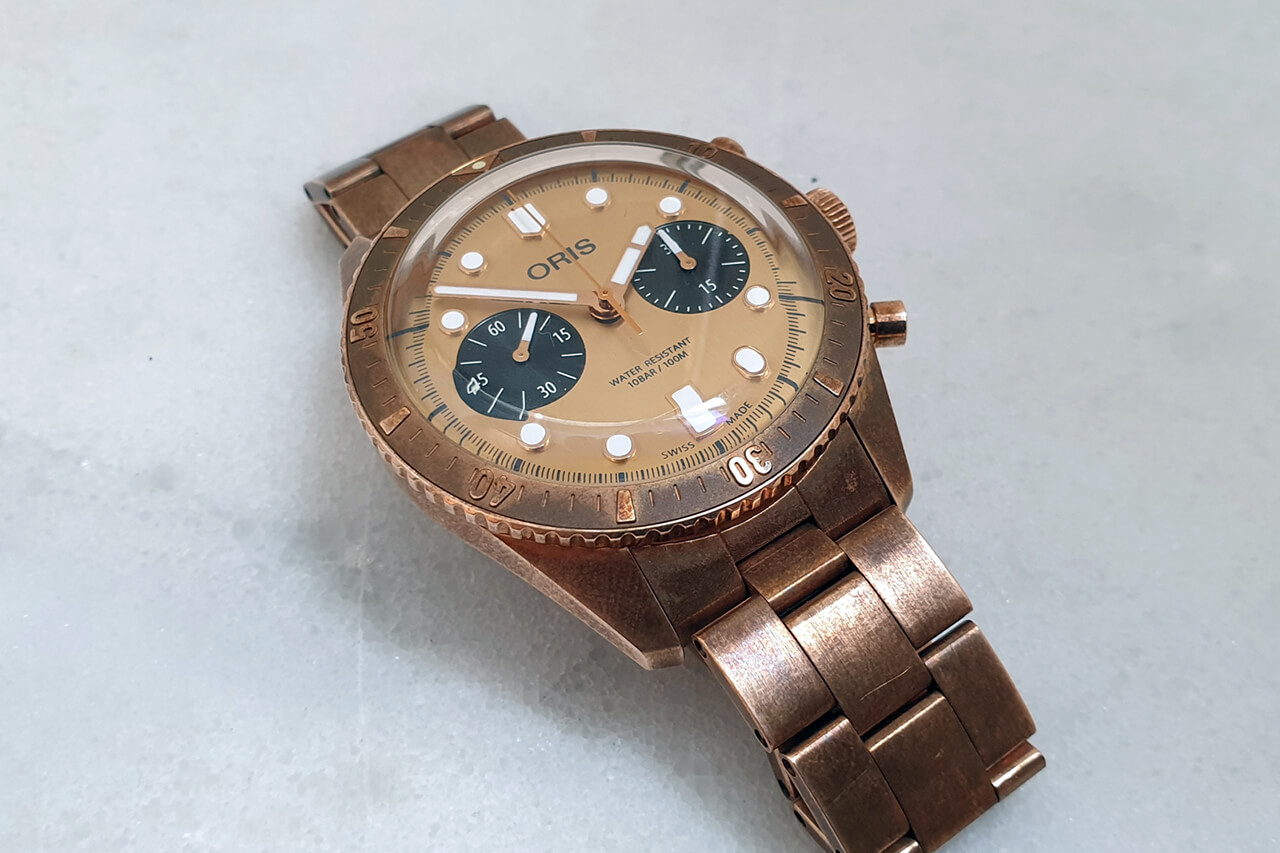 Before discussing the use of material let’s talk about the dial which I honestly think might be the best I have seen in the decade I’ve been writing exclusively about watches, it’s just… perfect. The yellow gold tone used for the main dial and hands just sings, while its chronograph track (with five-second, single second and 1/5 second markers each given distinct lengths) is more visually satisfying then that of the time-only models. 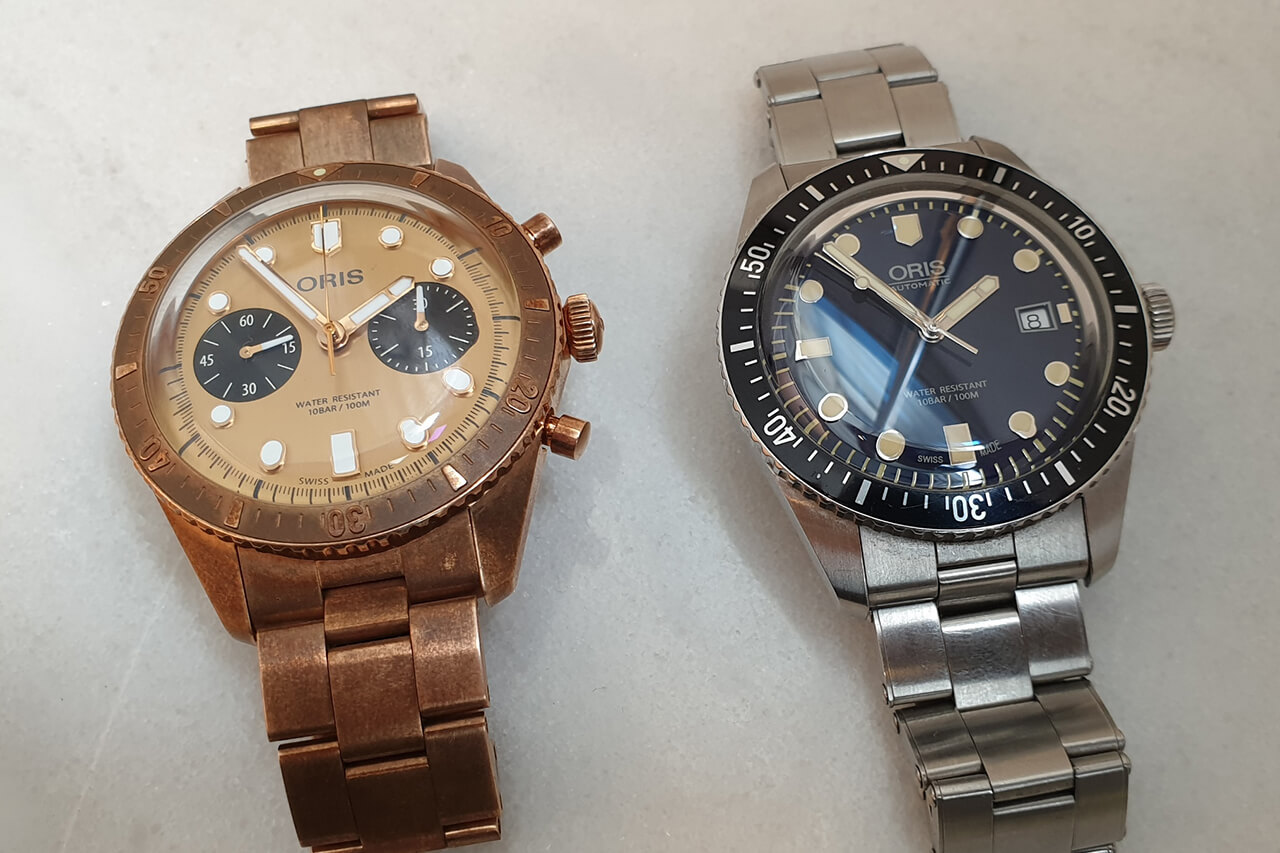 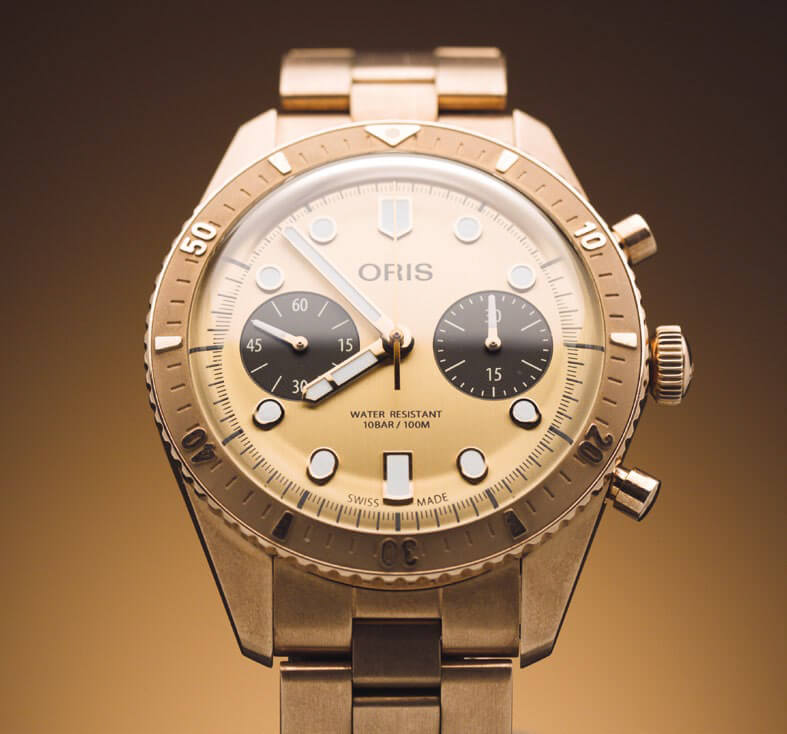 Framing the dial (and its glassbox sapphire crystal) is a recessed, unidirectional rotating bezel. I’m not usually a fan of insert-free metal bezels, but here it is in perfect keeping with the rest of the watch and those beautifully proportioned pump pushers to the right. 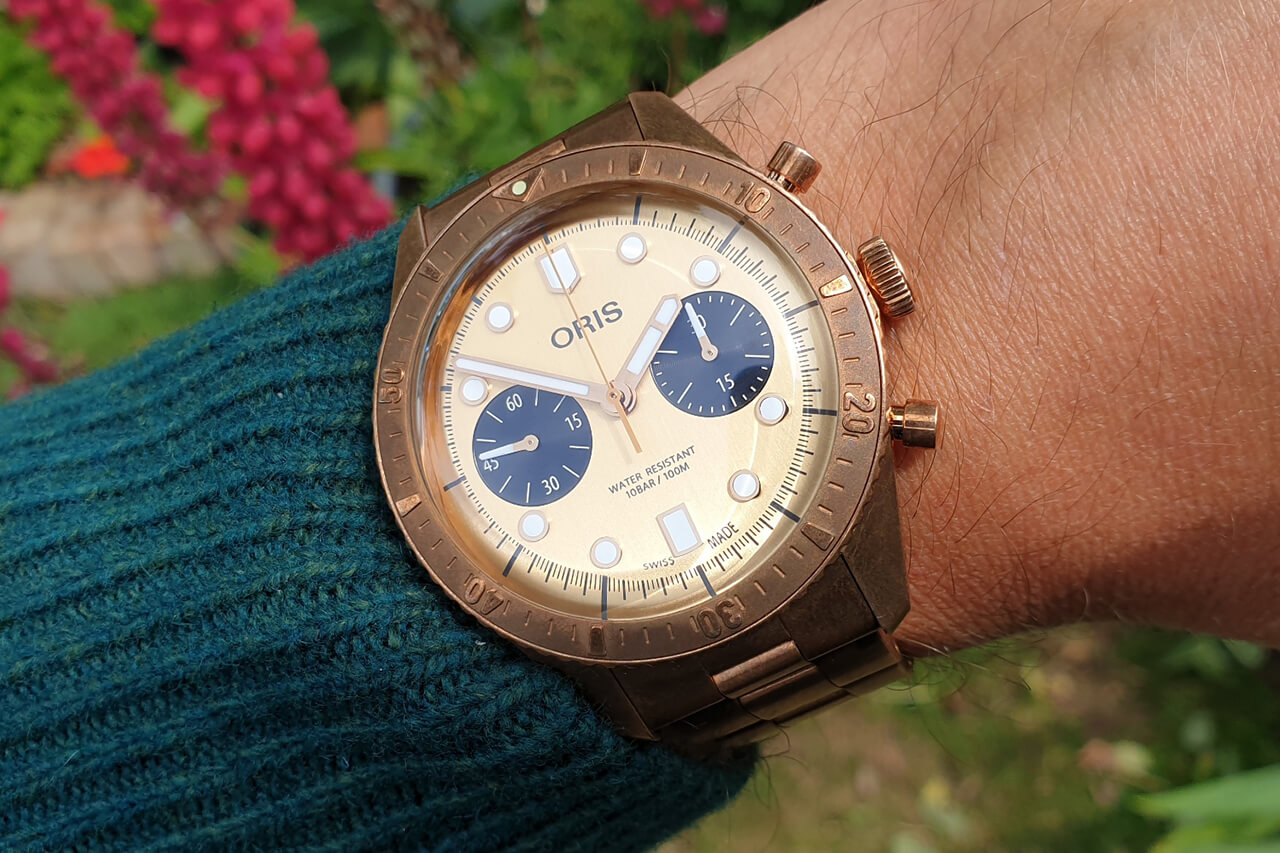 Since the days of Panerai’s Bronzo (I’m not certain of the bronze alloy used on Gerald Genta’s Gefica, which was the first bronze watch or whether watch collectors were quite that weird back then) owners have delighted in just how tarnished (sorry, patina’d) they could get their bronze watches, up to and including submerging it in all manner of reactive substances. Bronze makes the transition from factory fresh metal (which is not too dissimilar from gold in appearance) to ‘dirty penny’, all the way through to developing a bright green ‘skin’. I highly recommend the Instagram account of @lordshapleigh, whose particularly sadistic treatment of his own Carl Brashear Divers Sixty-Five deserves special mention. 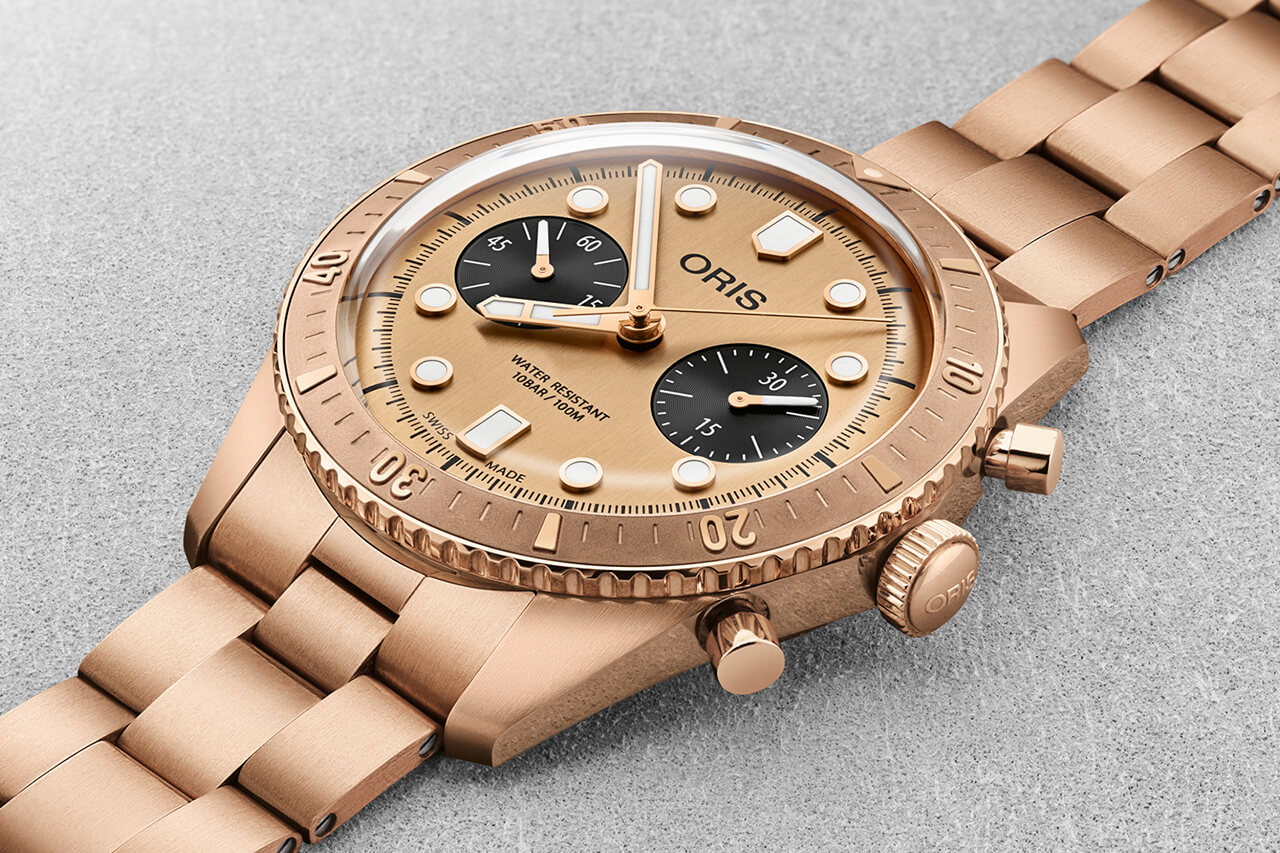 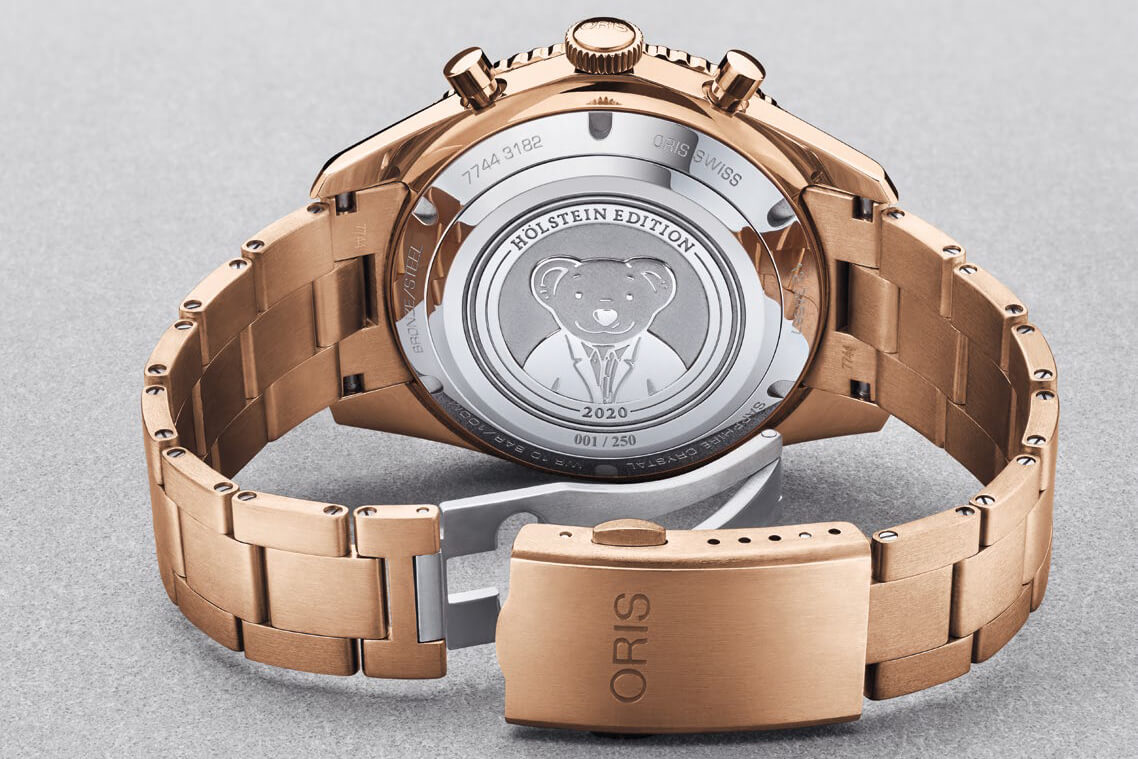 It’s not for me, I like shiny things to remain shiny. The press shots of the Holstein show its case and bracelet in its virgin state, a lustrous golden hue. Personally, I’d want to preserve that tone with a ‘fixed’ bronze alloy that uses a higher proportion of aluminium in the mix, but I appreciate that others love seeing their watch change on a daily basis, so I’m sure that the 250 pieces of this limited run will be snapped up in a matter of minutes.