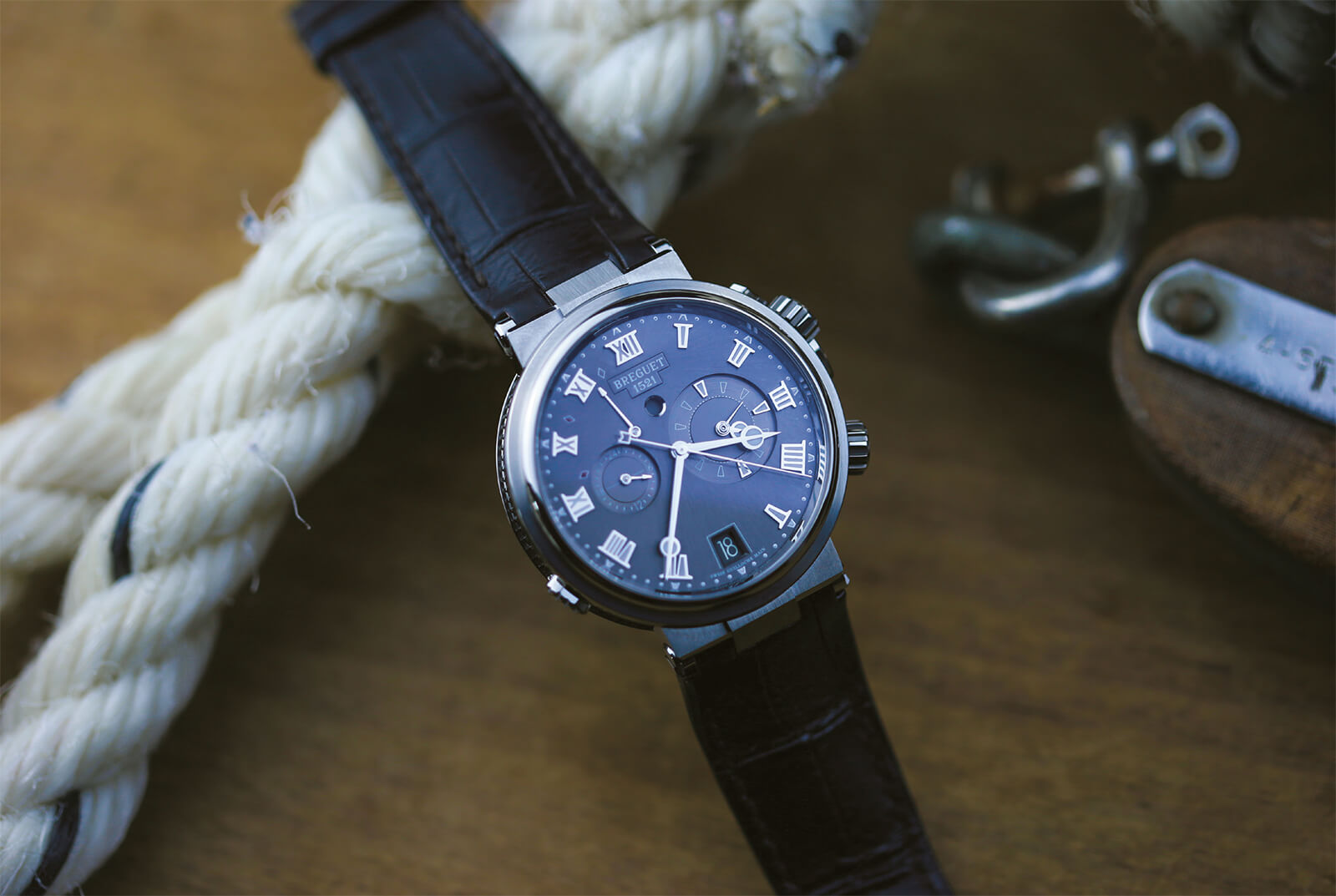 I’ve always thought of Breguet as the most traditional watchmaker out there. How could you not, if all you’d really paid attention to was the Classique? It’s a work of horological art, and with all the trappings and finishings of a 19th century masterpiece. At first glance, the Marine is an entirely different animal.

For one, it’s a sports watch. Well, kind of – it’s a chronograph with a bulkier case and an integrated rubber strap. Minus a diving bezel, it has all the trappings of a nautical watch. Except of course the fact that before this year it had only ever been offered in gold.

That all said, the Marine might not be as ‘un-Breguet’ as it first seems. After all, like many a watchmaker of his era, Abraham-Louis built marine chronometers. As early as 1815, Breguet as a company was building many a watch for the Royal Navy, too. You could say that if anyone has claim to a nautical sports watch, it’s them. 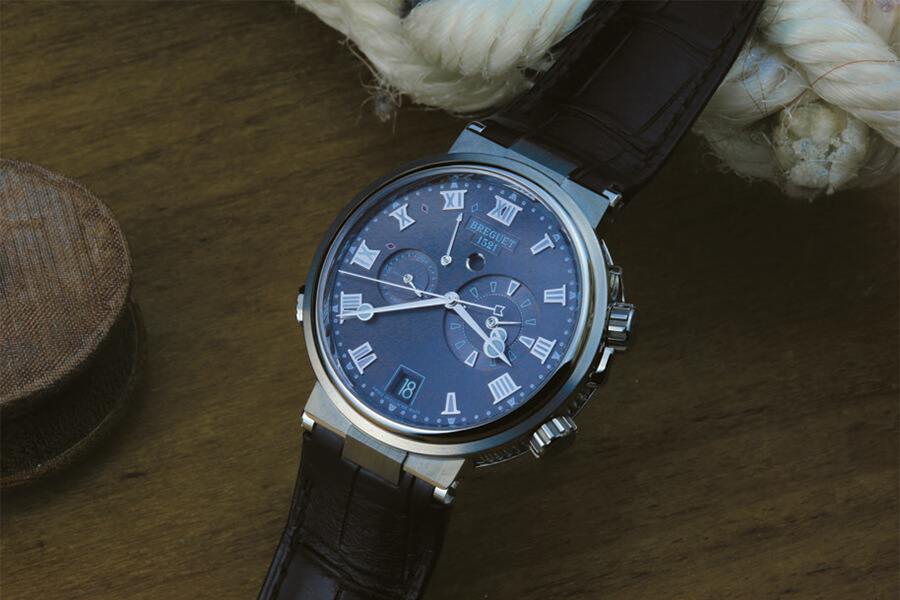 This year Breguet has even addressed the innate problem of making a sportier watch in gold by introducing titanium. Given how many watchmakers use the lightweight, super-strong metal nowadays, it might seem like a small thing, but this is a big move for Breguet. After having the new Marine Alarme (the 5547) on my wrist for a week, I can say that it was very much the right one.

The Marine’s shape is an unusual one, curved like a pocket watch in the main but with those straight, squared lugs. It’s also a little heavy in gold, even being just 40mm in size. The titanium improves things immeasurably, making it much more comfortable to wear for a full day. Good thing too; you don’t want to have to take spare watches for a day’s yacht cruising.

I actually prefer the plain sunburst dial to the guilloche waves that can be found on the rose and white gold versions. It’s a little more classical and gives the dial an unfussed look that’s a little more legible. On non-complication 5547 (time only) that’s probably not an issue, but when there’s also a date and second time zone aesthetic cleanliness is next to godliness. 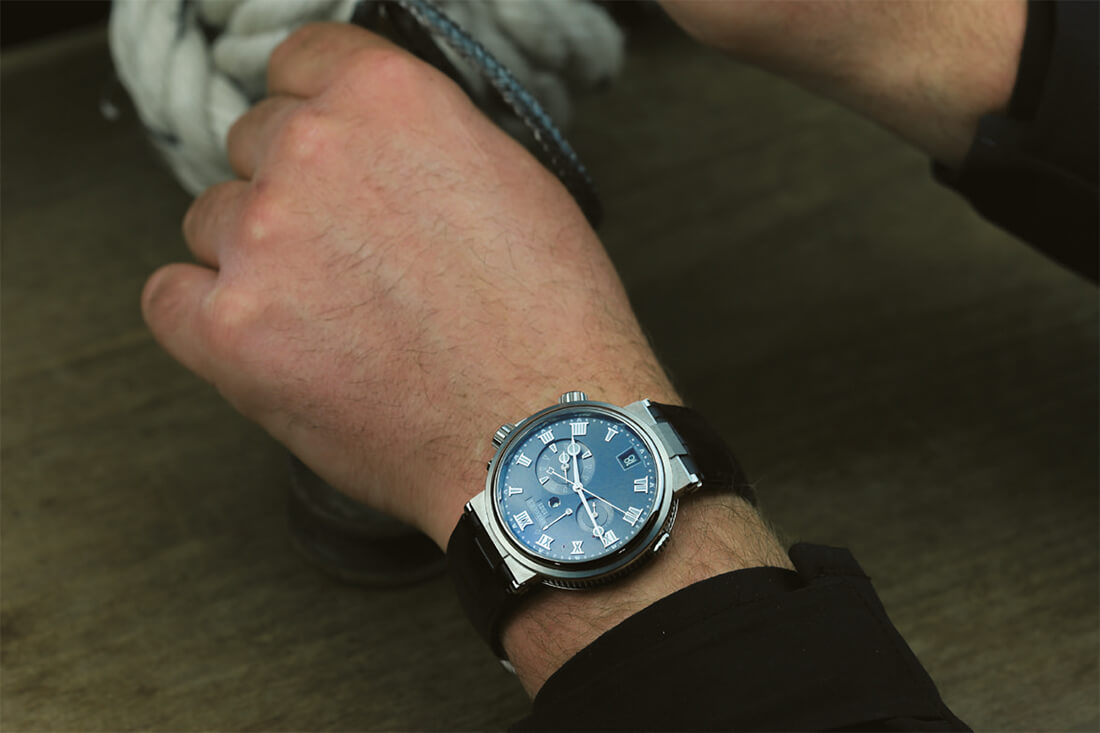 But of course, you can’t wear an alarm watch and not play with the titular complication, which likely narked fellow tube riders more than leaving my bag on an unoccupied seat. It’s not the loudest thing in the world, but it really doesn’t need to be. While it’s on your wrist you can feel it like a smart phone in your pocket, and when it’s not it’s a fair bit louder.

The alarm function uses a considerable amount of power, so you’d best wind it each time it goes off or risk missing an appointment. Fortunately, it uses auxiliary power, so it doesn’t drain the watch to the bitter end. In fact, the alarm has very little impact on the watch as a whole; the only sign of the alarm is a little ship’s bell on the dial. It’s still not particularly affordable, but for an alarm watch from Breguet £21,500 seems cheap. At the very least, it’s opened my eyes to what lies beyond the Classique. Combining classic design and technology for a smart-casual timepiece that punches above its pricing.