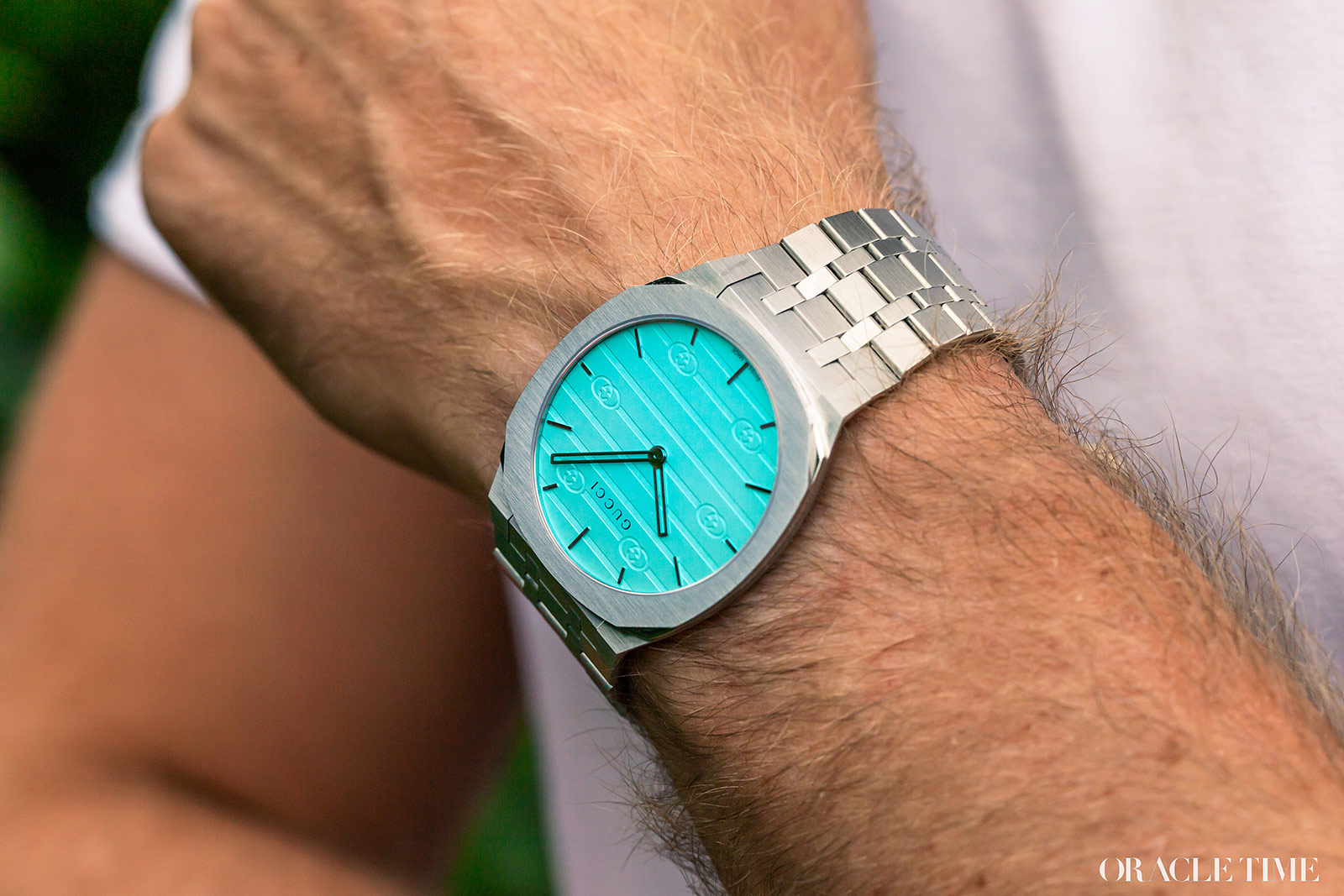 It’s no secret that we love colour in a watch. We don’t mean a subtle blue dial or a dark, forest green – we’re talking serious colour. Sky blue, burnt orange, more shades of yellow than a jaundiced banana, ever since the first lockdown we’ve been packing as much ostentatious colour onto our wrists as taste (grudgingly) allows. So, any new release that feels the same way is ok by us. If it comes in the form of a coloured glass version of one of last year’s most unexpectedly cool watches, the Gucci 25H, then all the better.

And when it was released in 2021, the 25H was one hell of a surprise. Fashion brands aplenty have tried their hands at haute horology over the years with only a few – mainly Chanel and Louis Vuitton – sticking the landing. Not only was Gucci’s sports-luxe timepiece a zeitgeisty bullseye in terms of design, but it was also impeccably made. 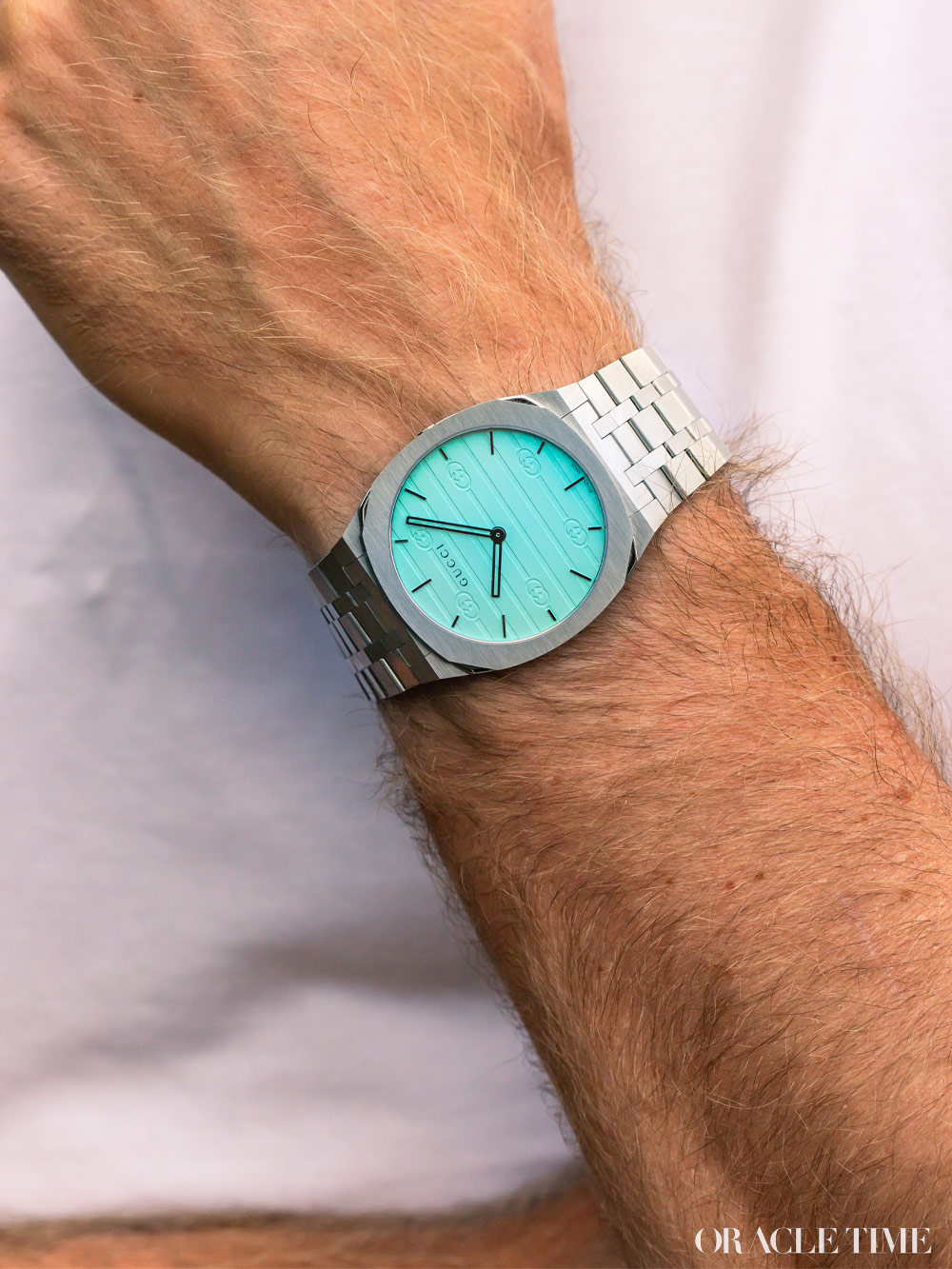 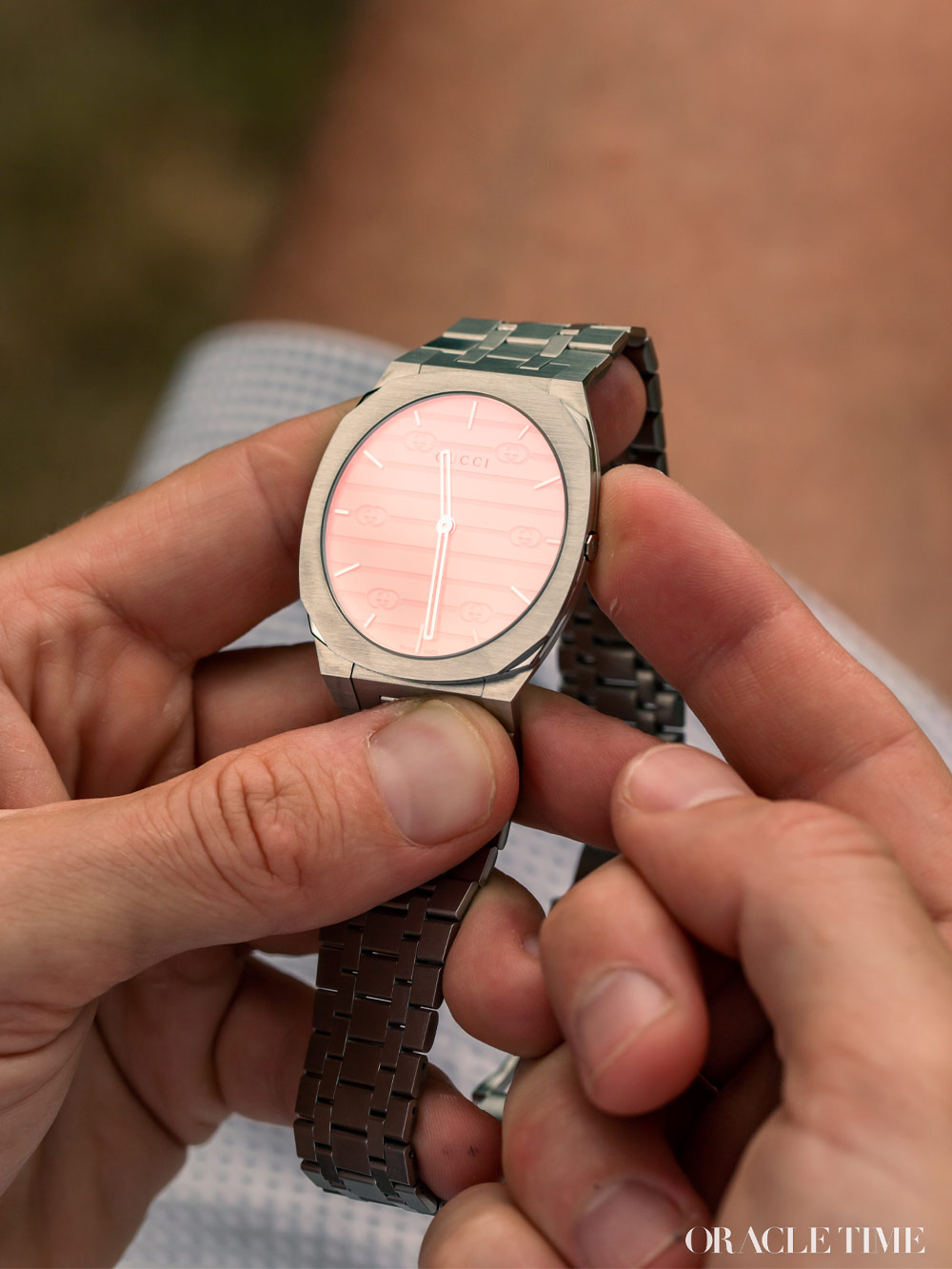 Previously however we’ve only ever got hands-on with the automatics in the collection. That wasn’t a conscious choice beyond wanting to see what the new calibre GG727.25 was like, but it does mean that trying out the eye-catching Gucci 25H is a new experience.

So, that colour. It’s technically called Ocean Blue which says a lot about the audience; the only oceans of that particular hue are generally found in places like the Maldives. That colouring however isn’t actually the dial but rather the sapphire crystal. Along with the usual anti-reflective treatment most decent watches get, it’s been given a colour treatment, too. The dial underneath is actually white. 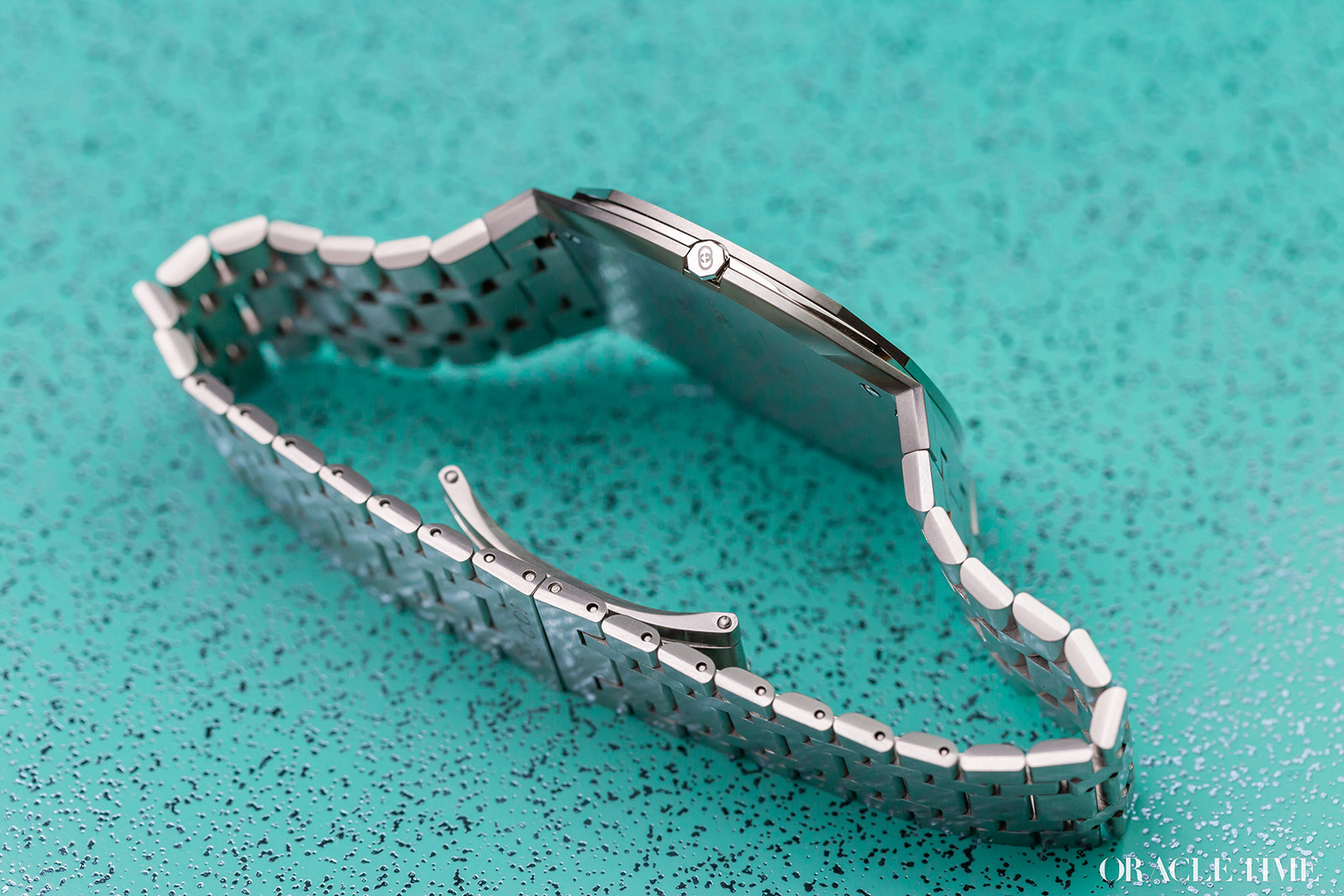 So, why this way rather than a standard blue dial? Well, as you’re looking through a filter rather than at something that is itself blue, you get more depth of saturated colour. It also means that the indexes and deep grooves in the dial are all consistently coloured, which makes life far easier for the watchmaker. Honestly, we also think part of it is that it’s just a bit more fun. Whatever the reason, it looks incredible.

What’s less incredible however are the interlocking Gs of the Gucci logo around the dial. The automatic versions don’t have this and they’re all the better for it. Here not only does it interrupt the streamlined look of the watch, but it makes the Gucci 25H Ocean Blue feel more like a fashion piece rather than a serious watch. Yes, this is quartz and therefore less prestigious than the mechanical, but that shouldn’t instantly make it a fashion accessory over a fine timepiece, especially when there are tons of cool, quartz pieces out there these days. 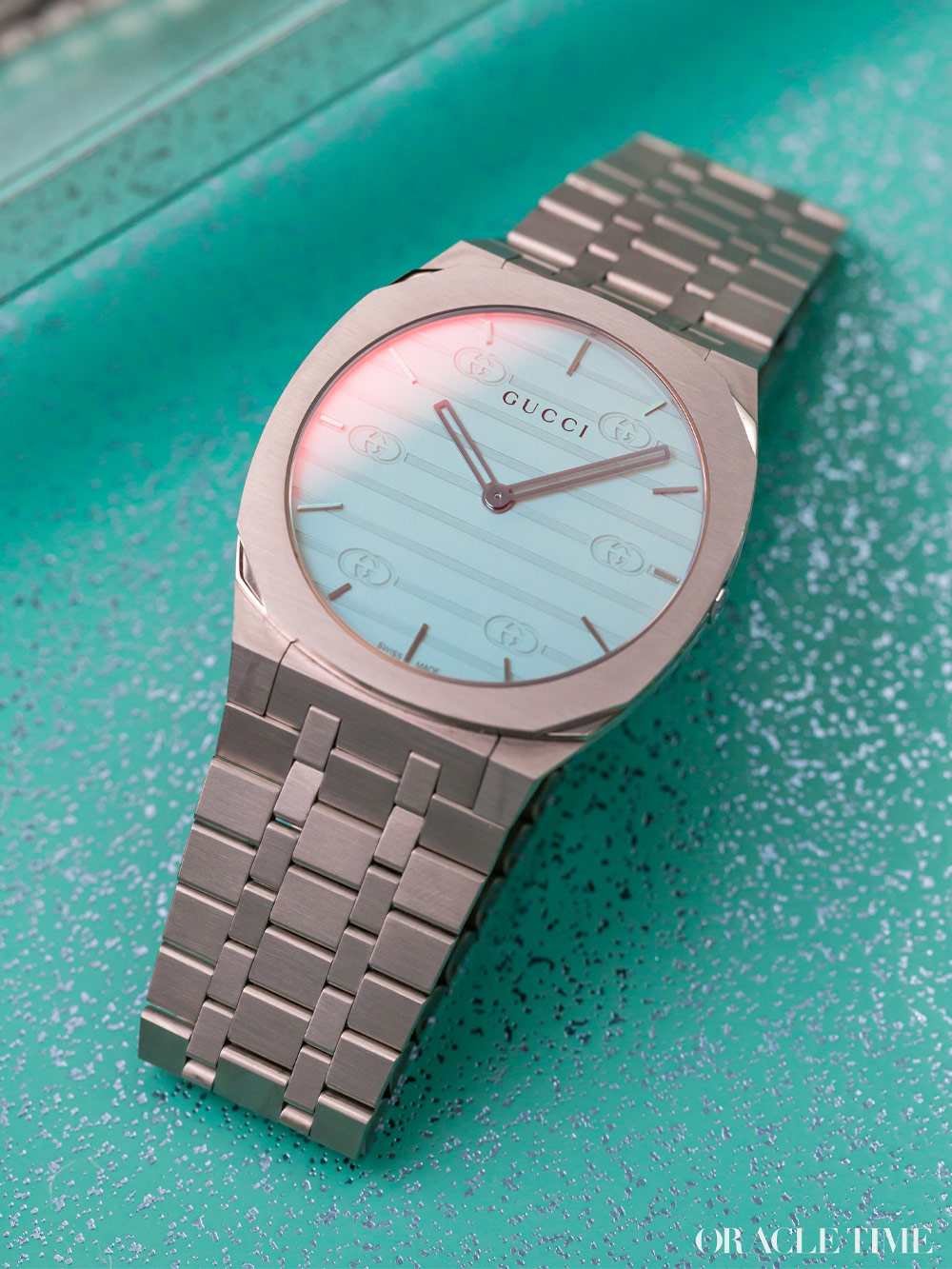 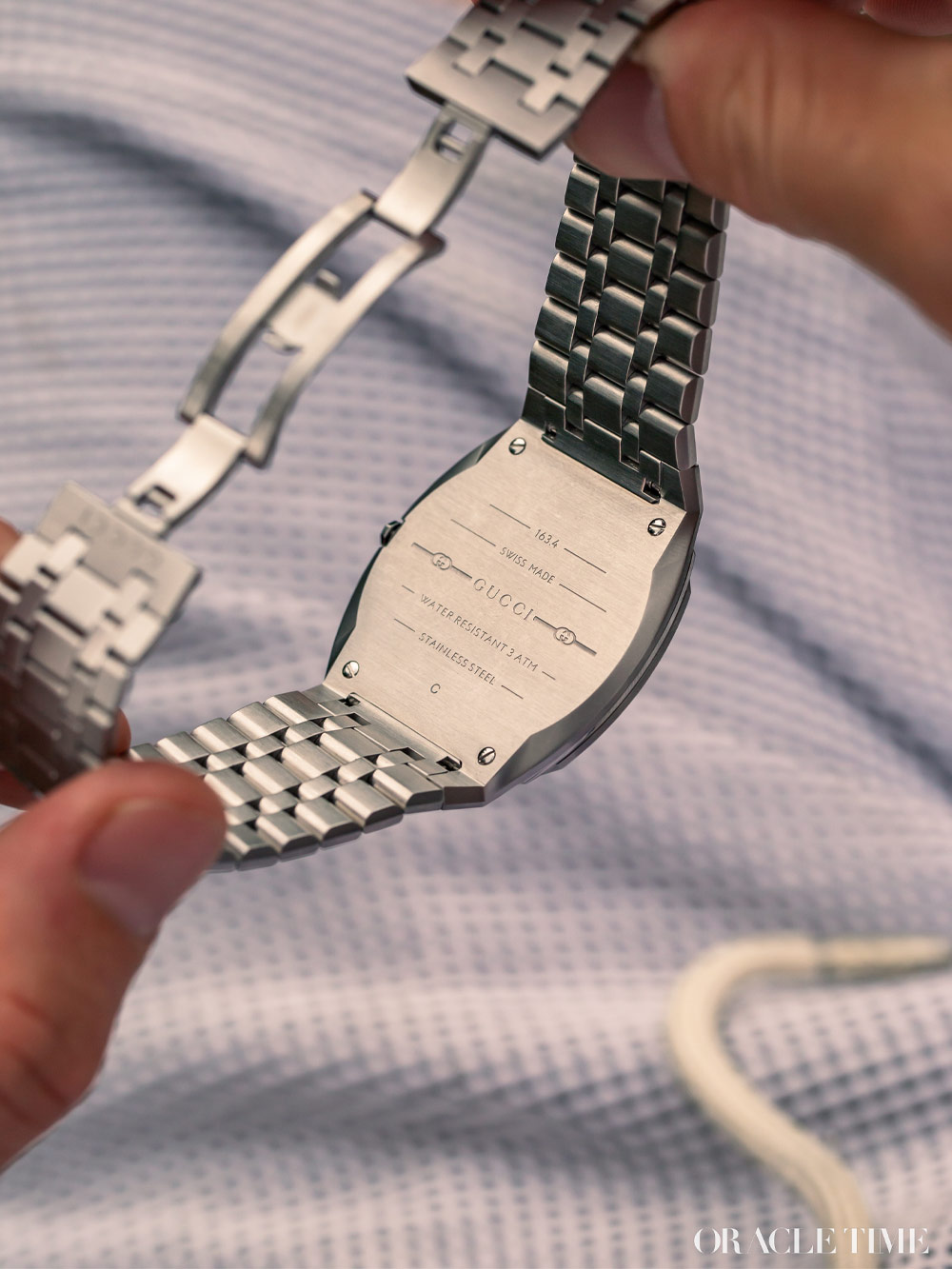 Thankfully, it shares the same case as the automatics, which is superb. It’s a touch smaller at 38mm compared to 40 and thanks to the quartz movement is considerably slimmer, but the multifaceted, impeccably machined case is proportionally the same. That includes that 1970s, Genta-flavoured bezel and a bracelet we’d happily stack against the AP Royal Oak.

Like the automatic, the crown is a bit too small and inset to operate easily – even more so in fact – but at least in this case you won’t need to reset the watch often. You definitely won’t need to wind it. We’re fine with it in this instance as it streamlines the 25H silhouette even further. 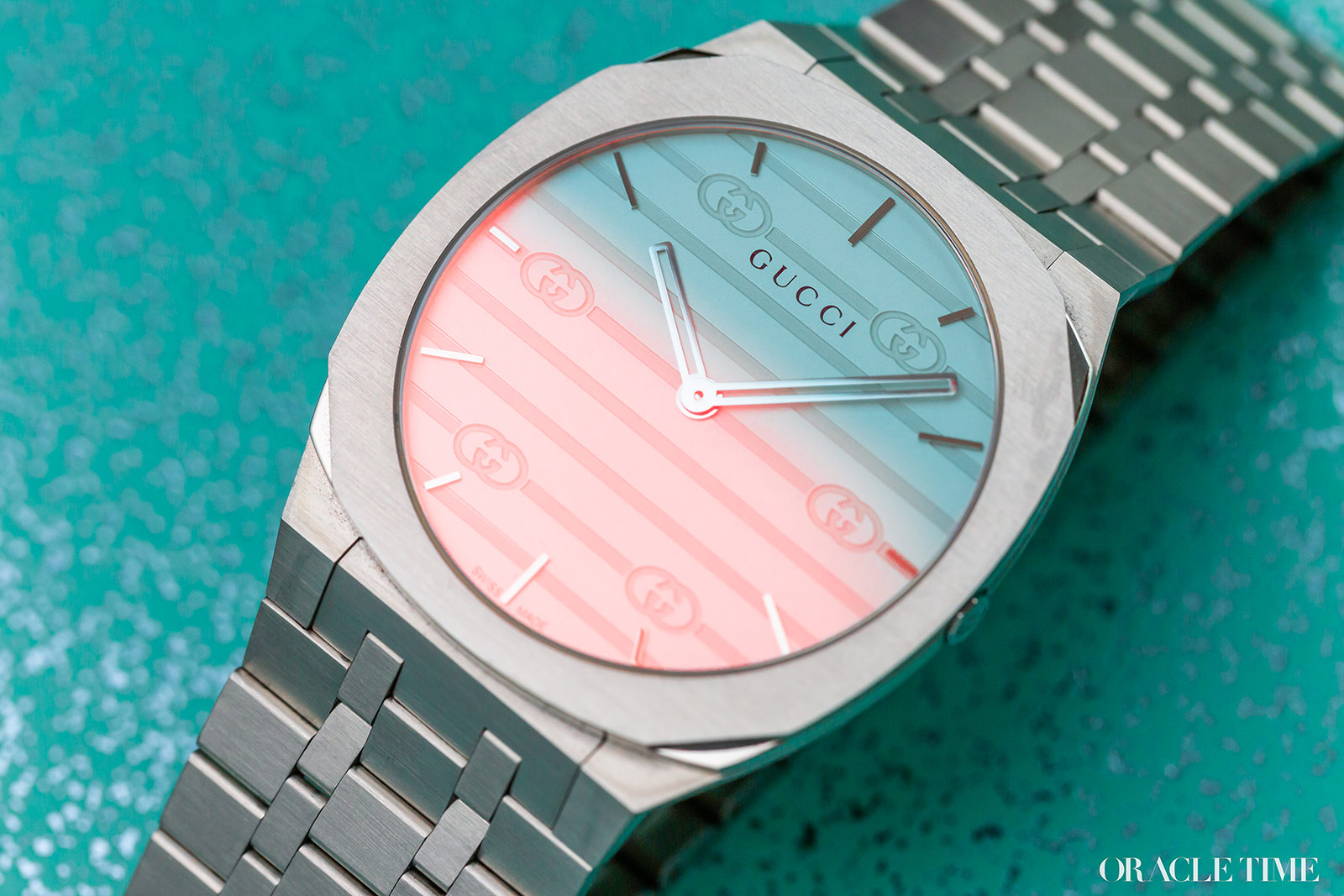 So, down to price. The baseline automatic comes in at £7,500, which is relatively steep but not unexpected for a sports-luxe timepiece from a name like Gucci. At least you can justify it in the calibre, case and overall 1970s look. How does the colourful quartz compare? The Gucci 25H Ocean Blue will set you back £1,250. In our humble opinion, that’s a pretty damn good price. That case alone is worth the money. The fact that it’s a quirky, colourful piece makes it seem like a summertime bullseye.

That said, we’re not planning on adding it to our own rainbow collection, for two reasons. First, we already have enough Tiffany-adjacent blue dials to keep us going. Secondly, those Gucci logos. With a cleaner, less branded dial though, we’d be very, very tempted.