There might be fewer podium finishes and spraying  magnums of champagne, but the horological take on the Grand Prix is as competitive as any F1 race. Held each year in Geneva, the GPHG is essentially the Oscars of watchmaking, a competition between the best and brightest to try for the most prestigious prizes in the industry.

Ahead of the winners later this year, the GPHG has announced its full (and not very short) shortlist. While in the past we haven’t been exactly… well, exact in our winning predictions, there are certainly some in the major categories that have caught out eye. Here are the watches that we tentatively think might do kind of well maybe.

Bronze and green might be the most zeitgeisty colourway there is right now, but few have managed it better than IWC. Granted a good cross-section of their collection used it, but none more successfully than this update of their flagship Spitfire pilots chronograph. 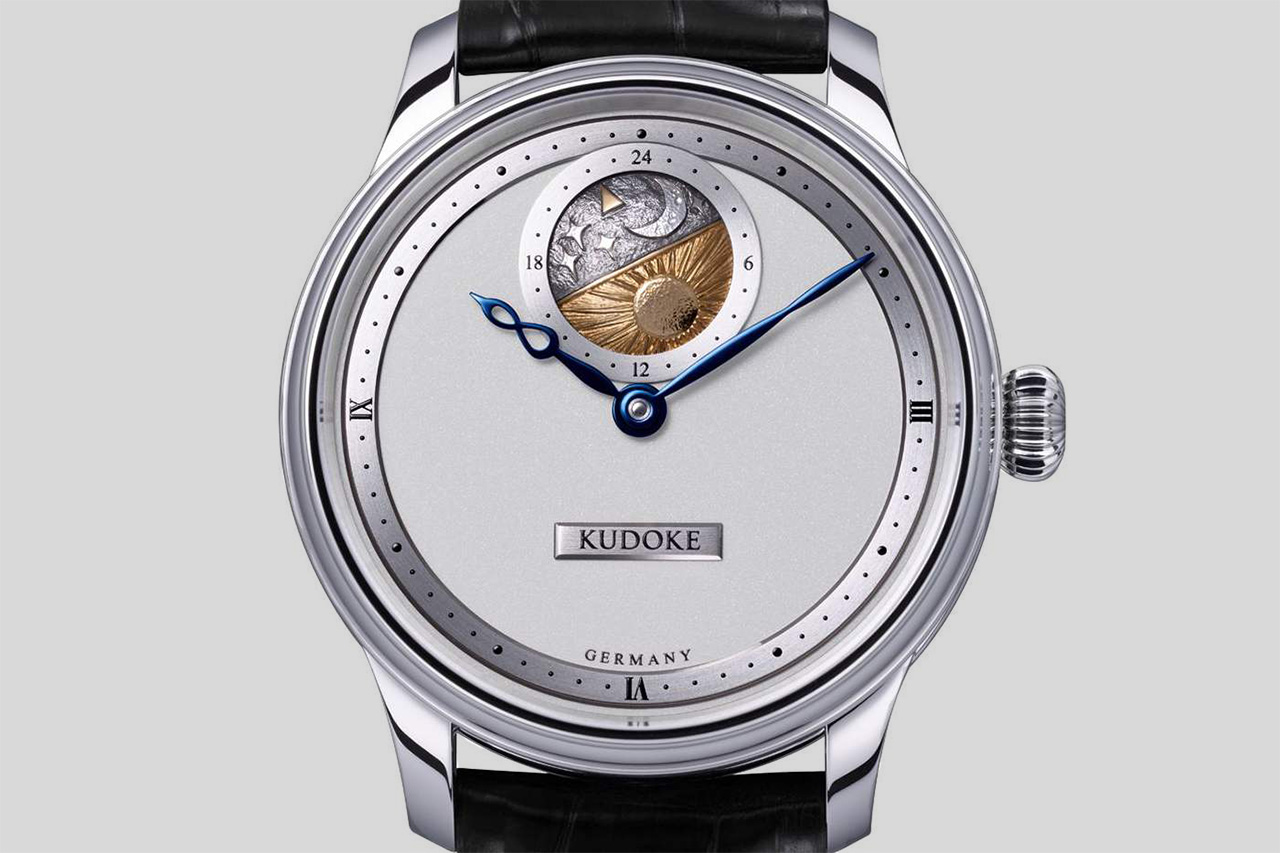 Based on Stefan Kudoke’s first movement, the imaginatively named Kaliber 1, this update sees an almost empty dial with just a 24-hour day/night indicator at 12 o’clock. Other than that, all the action is movement side, visible through the sapphire caseback for anyone in need of a horological masterclass. 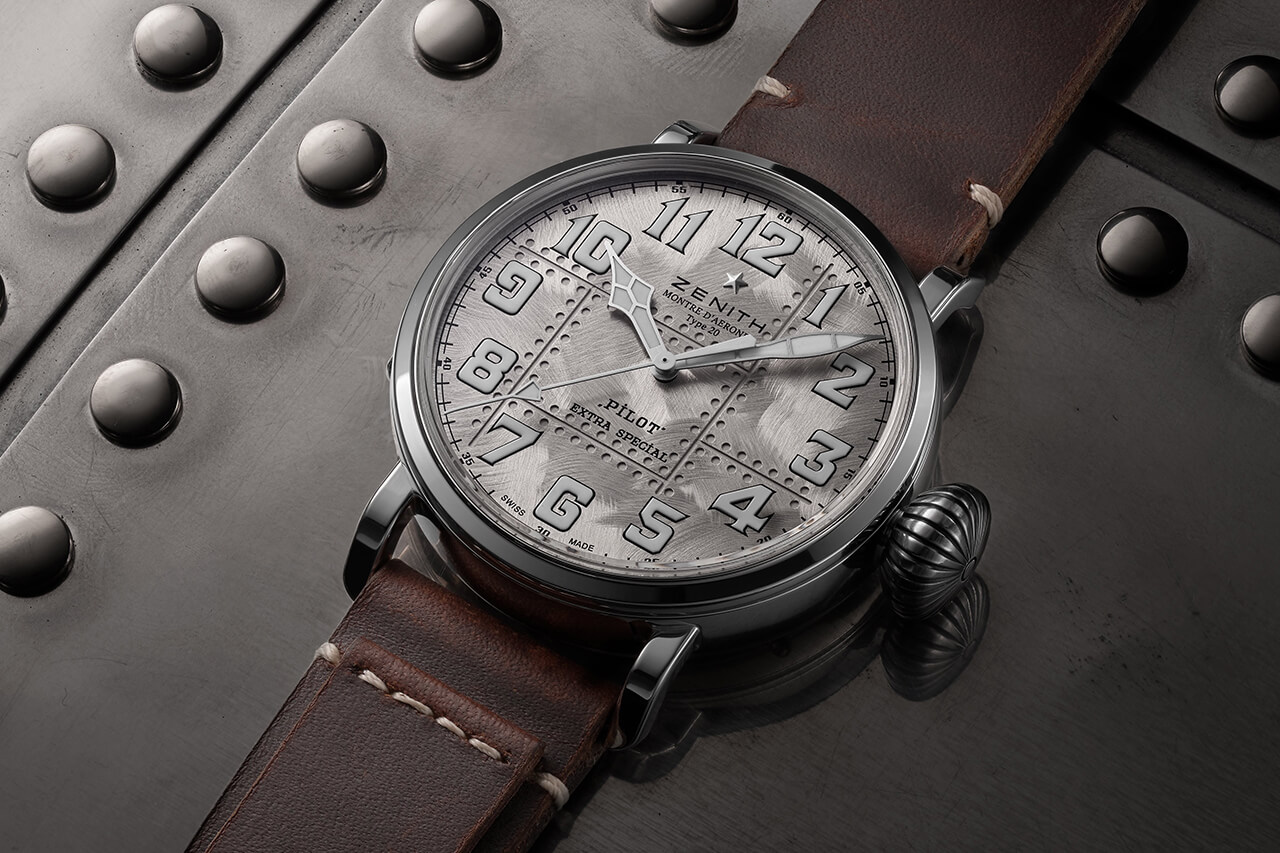 I love the Type 20 so I may be a little biased, but I’m sure most of you will appreciate this just as much as me. Instead of the restrained, relatively plain dials of a normal pilots watch, here it has been built to imitate the rivets of an aircraft fuselage. It’s a simple aesthetic tweak, but an inspired one and I need it in my life.

Leaning into the desperate need for customisable watches, Hegid’s flagship piece uses a mechanical movement core that can be dressed up with a range of difference cases and straps with surprising ease. This diving-slanted edition is just the start of what Hegid’s collection can become. 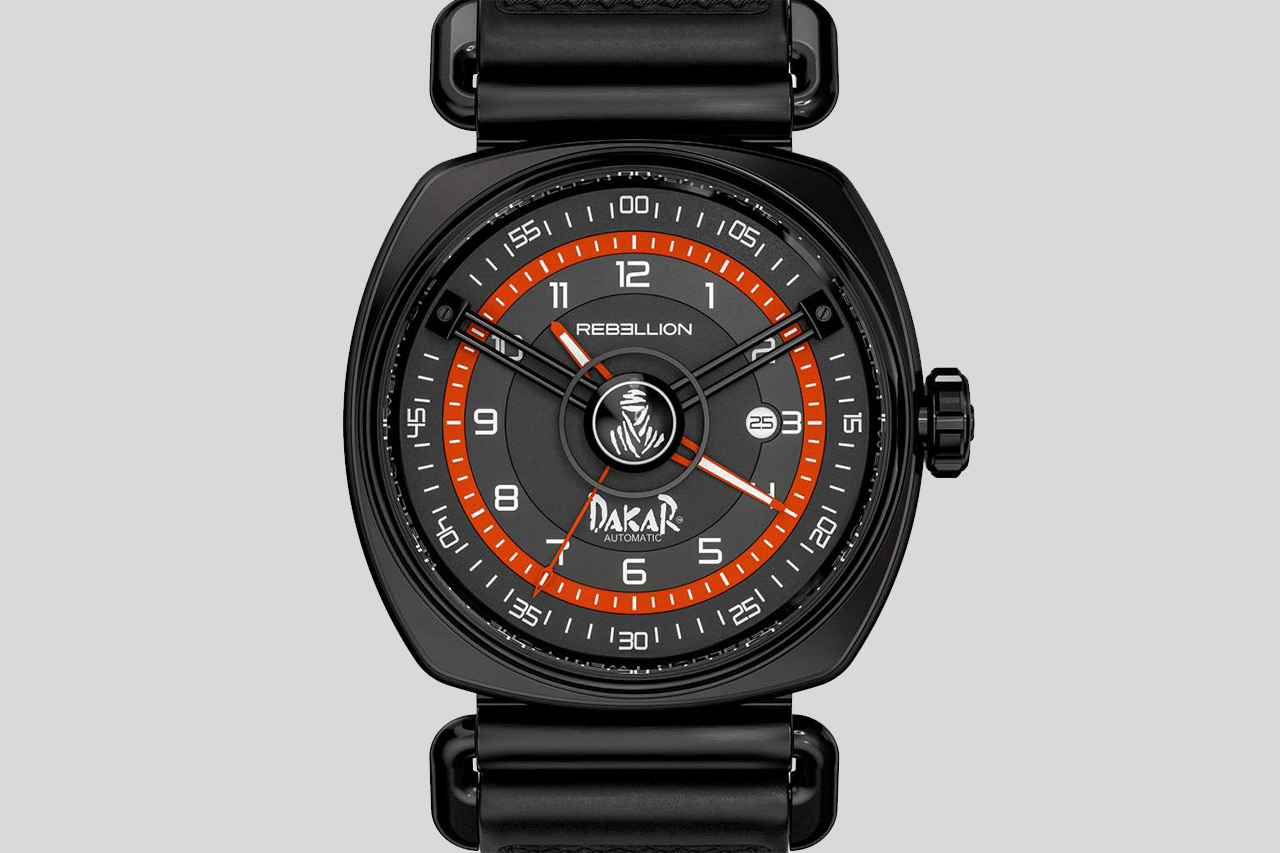 One of the subtlest, most restrained pieces from Rebellion is still an extraordinary watch; case in point, the Twenty-One Dakar edition.  The rally-inspired watch with its cushion case and suspended centre might not be as horologically ground-breaking as previous Rebellions, but the finishing and design take the gold.

If this is what you give as an anniversary present expect a very happy year to come. This 37mm masterwork is covered in a wealth of stones – 56 on the case, 685 on the dial and even 62 on the moon phase, along with 12 on the indexes. If this isn’t the most spectacular moon phase on the market, I’m stumped as to what is. Breathtaking. 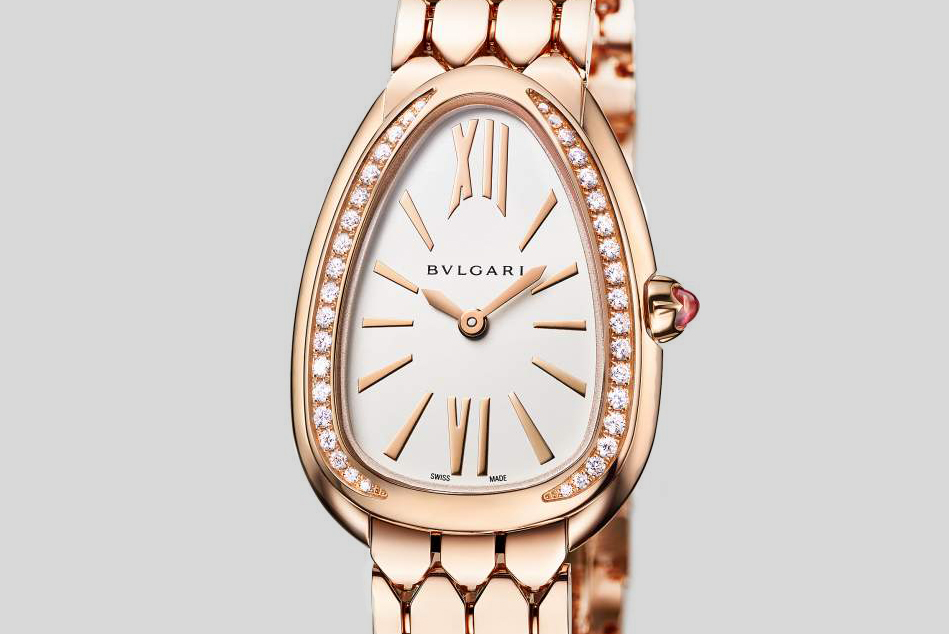 An icon of feminine watchmaking as much as it is of jewellery, Bulgari’s Serpenti is as restrained here as it is refined. A pared-back dial makes for a lustrous counterpoint to the rose gold with a tasteful number of diamonds encompassing the snake’s head. The finishing touch is a beautiful scaled bracetlet.

This stunner was built to celebrate the 50th anniversary of the legendary Gerald Genta’s own manufacture, he of Octo and Royal Oak fame. It’s a near perfect interpretation of the watchmaker’s signature design, particularly with its retrograde minutes and date. 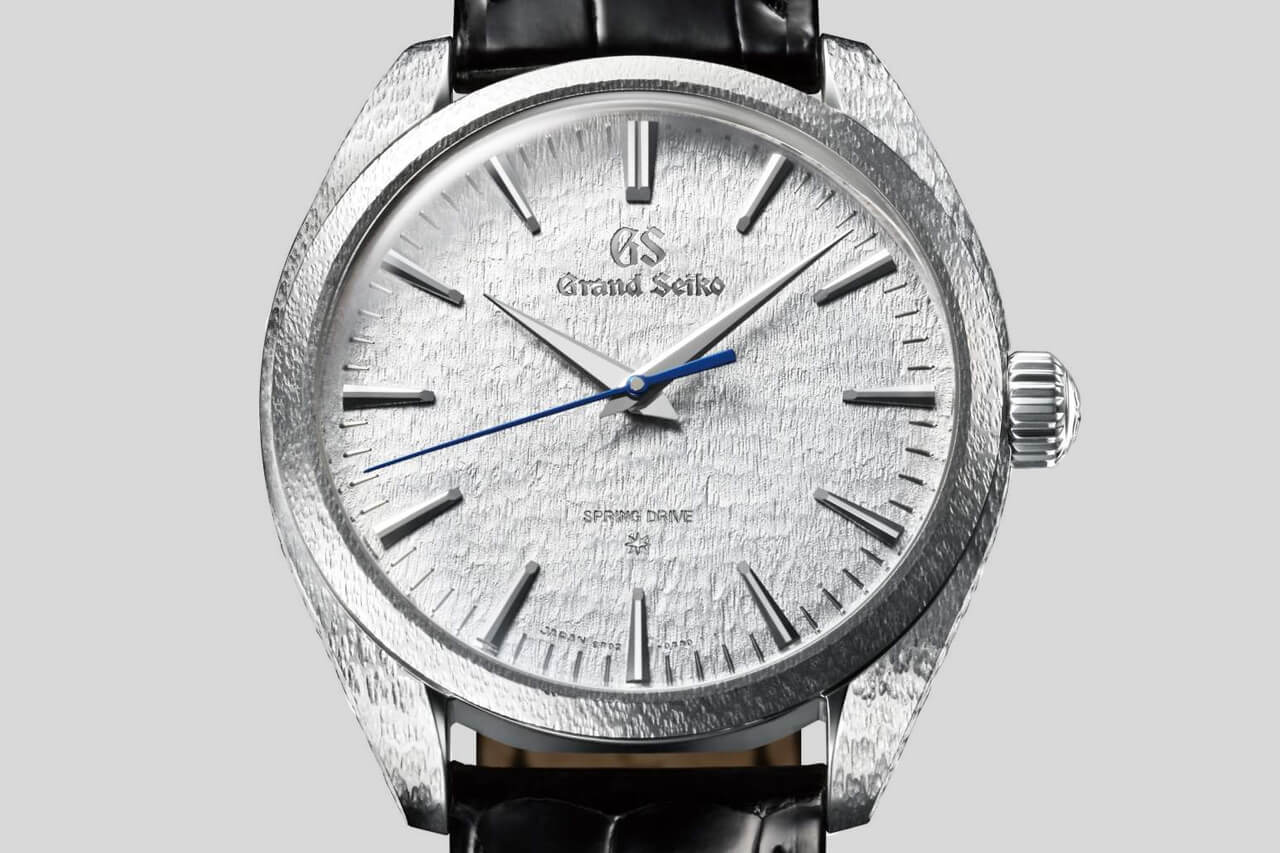 Another celebratory timepiece, this time for Seiko’s famous Spring Drive movement, this piece leans heavily on craftsmanship rather than the technical nature of the calibre. Every surface of the platinum case and silver dial have been entirely hand-carved to reflect the snowy landscape of the Shinshu studio in which it was built. 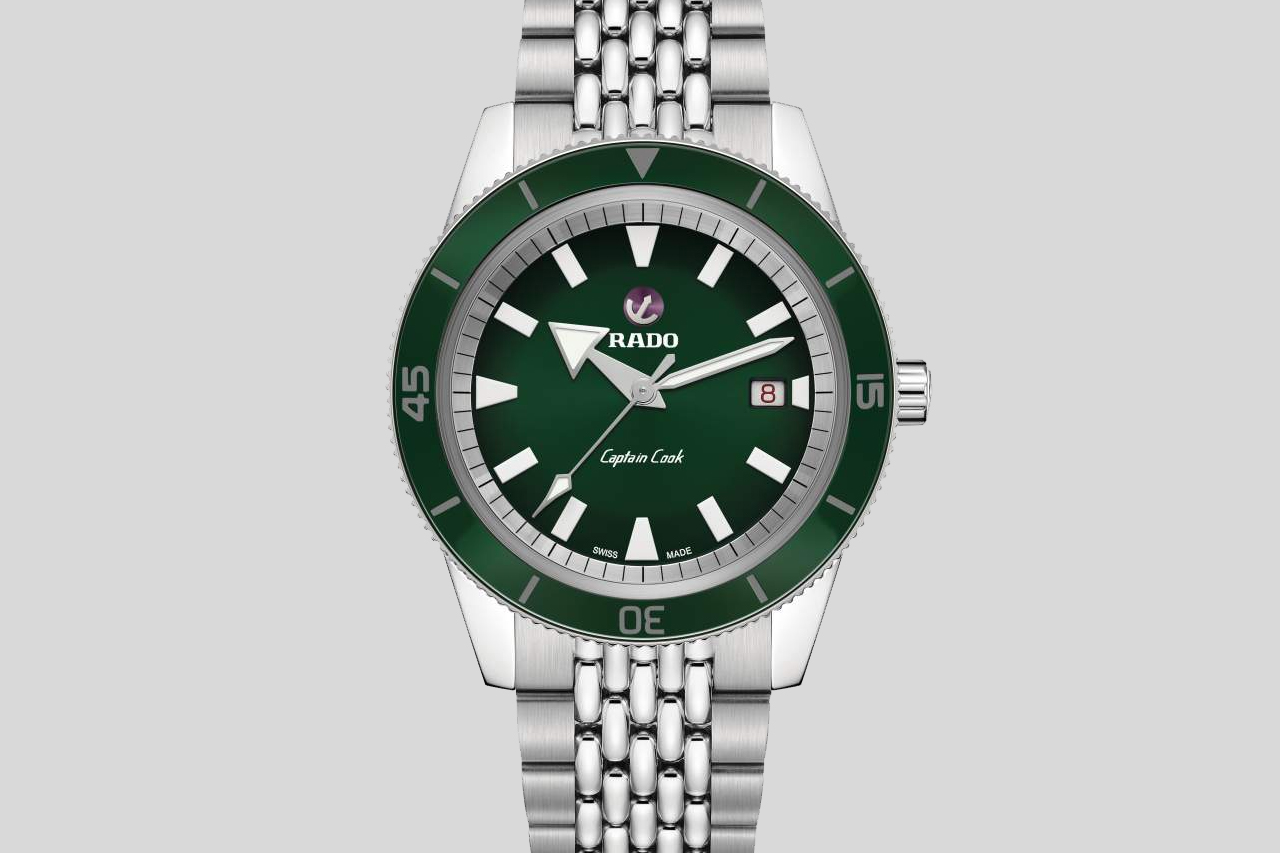 Rado has really found their feet with the Captain Cook, one of the poster children for the current glut of retro re-issues. A little more modern in design than the previous, overtly vintage model, the new model nonetheless has all the charm of the 1962 original, with a bit of a ceramic update. 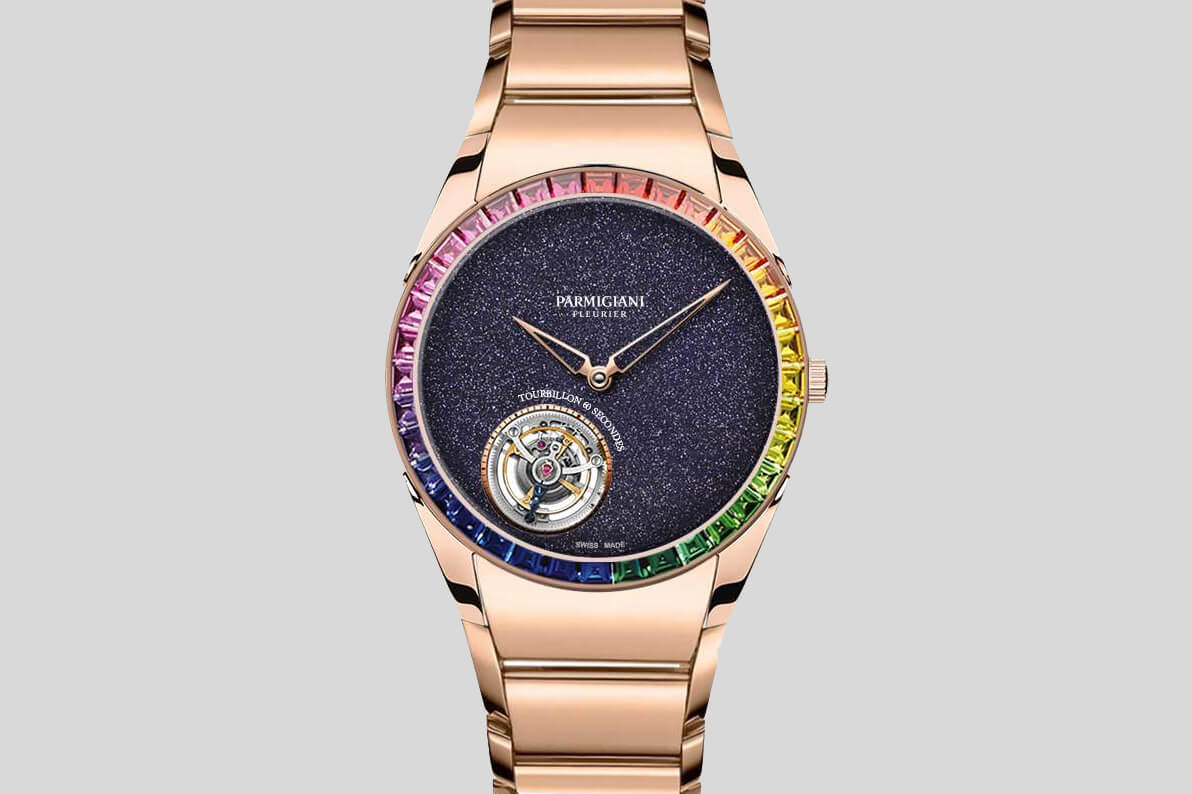 Part astronomical starry sky, part Mario Kart Rainbow Road, this galactic take on the otherwise classical Tonda 1950 is more colourful than a James Gunn superhero film. It’s not all aesthetic magnificence though; the movement is equipped with a tourbillon at 7 o’clock, a celestial orb counting out the seconds. 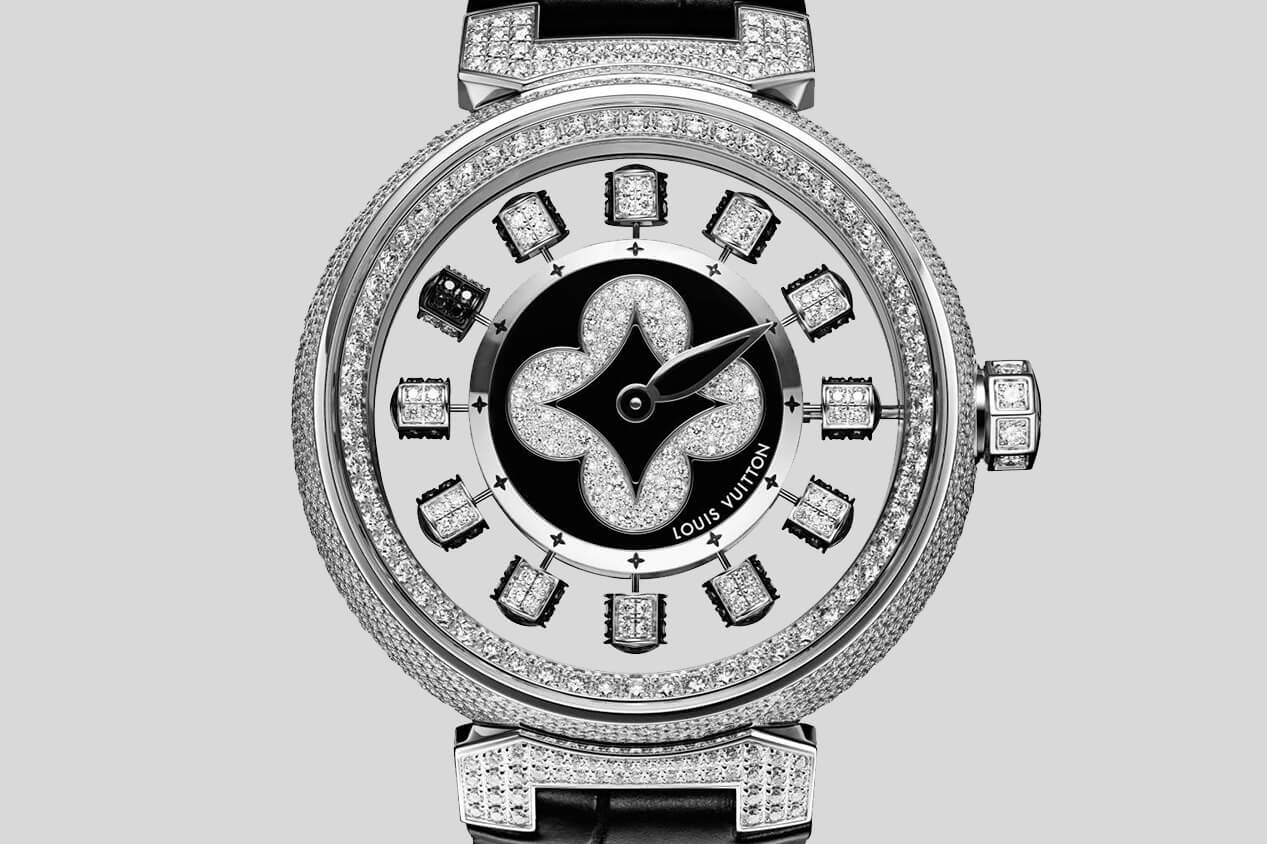 Inventive to the point of mildly confusing, at first glance it’s hard to read this diamond-encrusted, openworked version of Louis Vuitton’s signature Tambour case. Never fear however, as time is told using a unique set of spinning markers, with the black diamonds indicating the hour instead of the white. This is one of the most playful women’s watches around and more than deserves recognition. 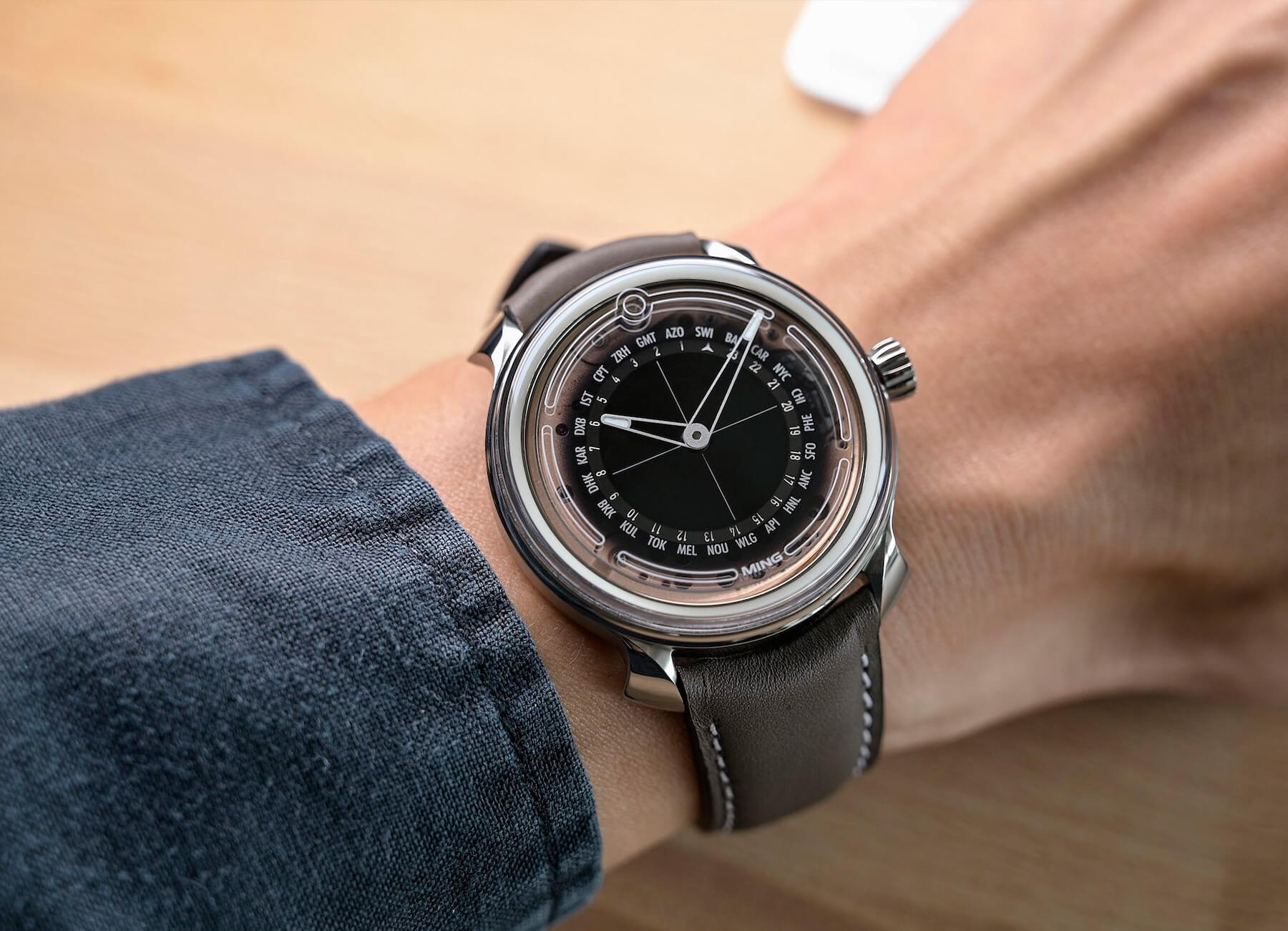 It’s certainly not the most complicated of complications, but microbrand Ming’s take on the worldtimer is nevertheless one of the coolest out there. Using their signature smoked sapphire crystal and some impressive statement lugs, it shows why collectors are obsessed by Ming. 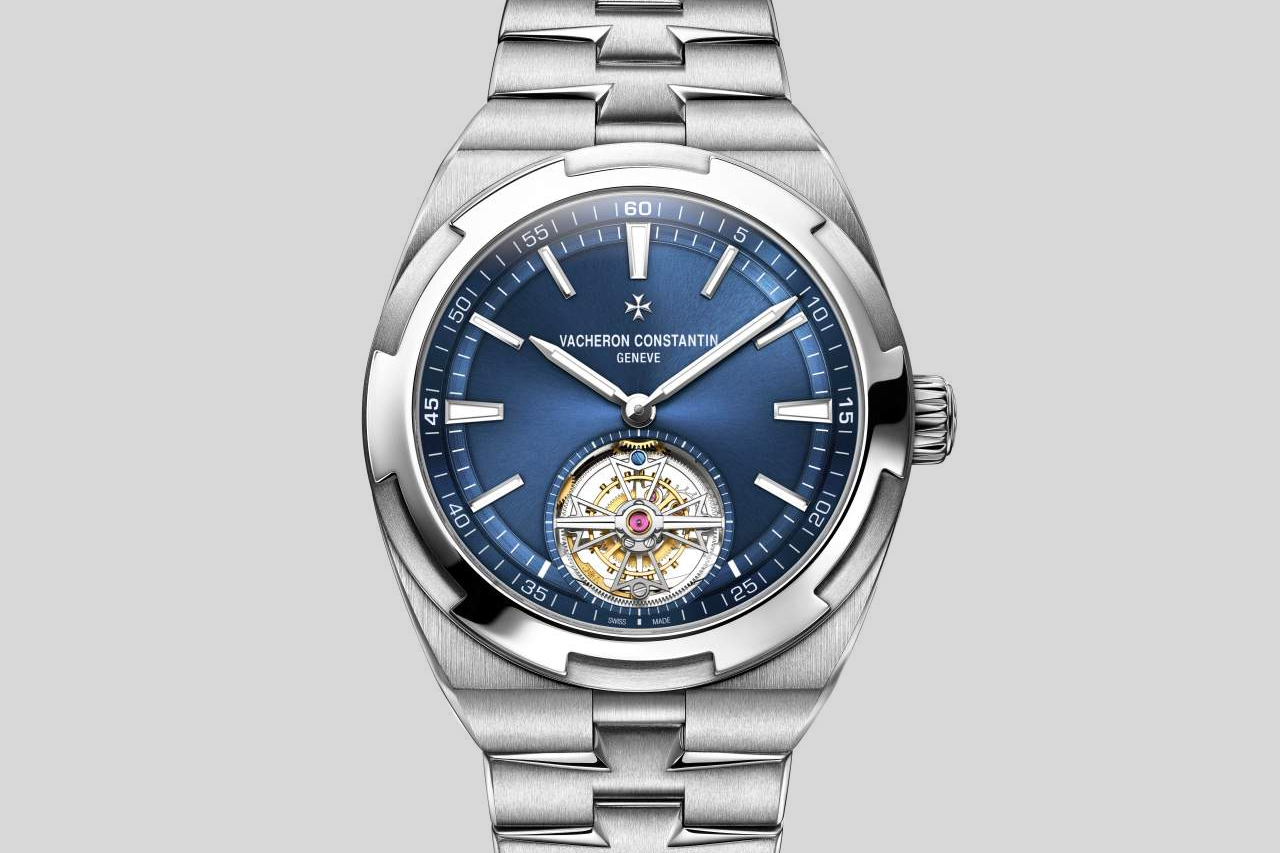 In my opinion, the Overseas belongs in steel; it’s a sporty watch after all. But then, it also looks magnificent with a Maltese cross-finished tourbillon turning at 6 o’clock, so its hard to tell whether elegance or practicality wins out here. Which is kind of the point, to be honest. 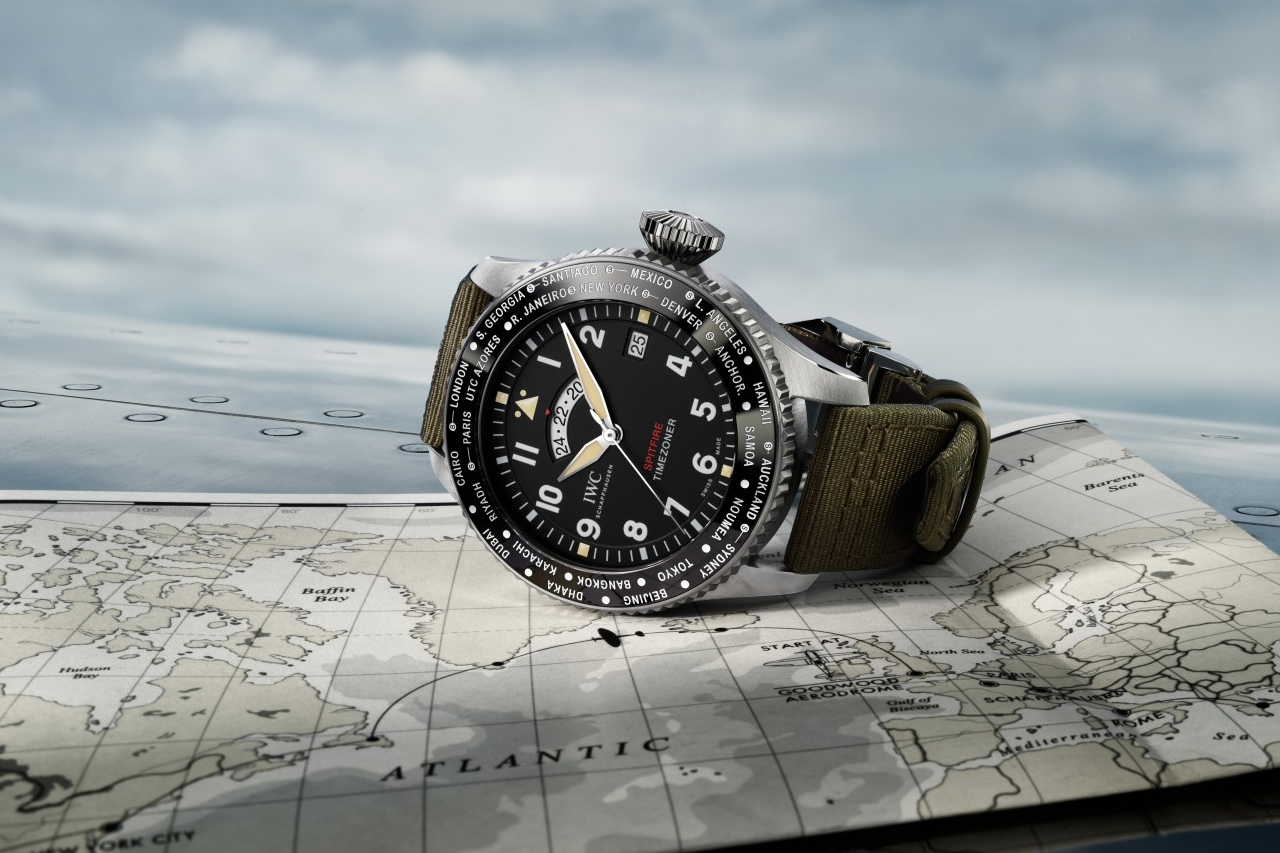 As IWC get ready to send a restored chrome spitfire around the world, it’s only fair to give credit to the project’s horological tie-in, especially when it looks like this. With it’s iconic oversized crown and worldtimer bezel there’s a lot going on here, but it all seems to work. Here’s hoping the aircraft itself is as successful. 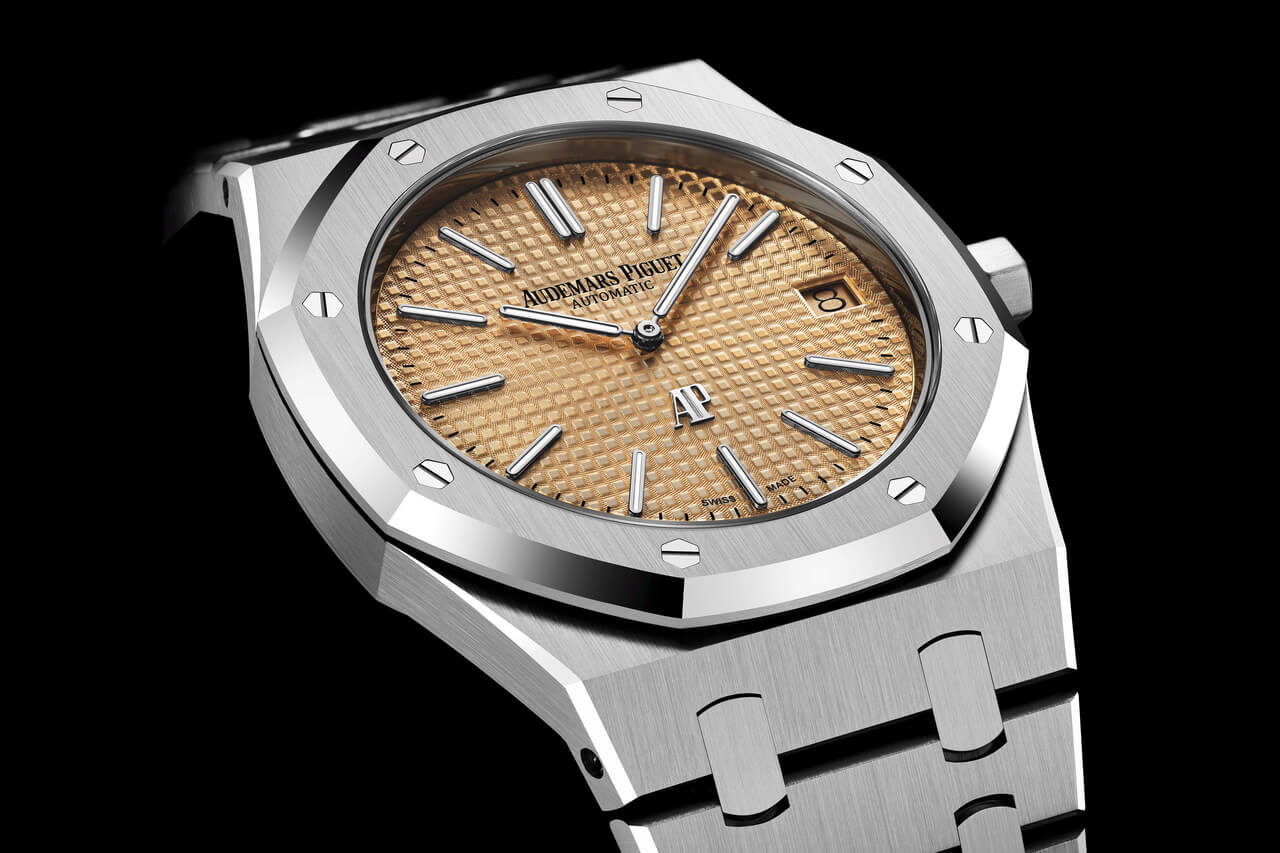 It’s genuinely hard to get more iconic than the Royal Oak. It’s what Audemars Piguet have been living off since the 70s and it’s not hard to see why. With a golden version of the watchmaker’s famous ‘little tapestry’ guilloche and a slimline figure, this is an charmingly elegant take on the classic. 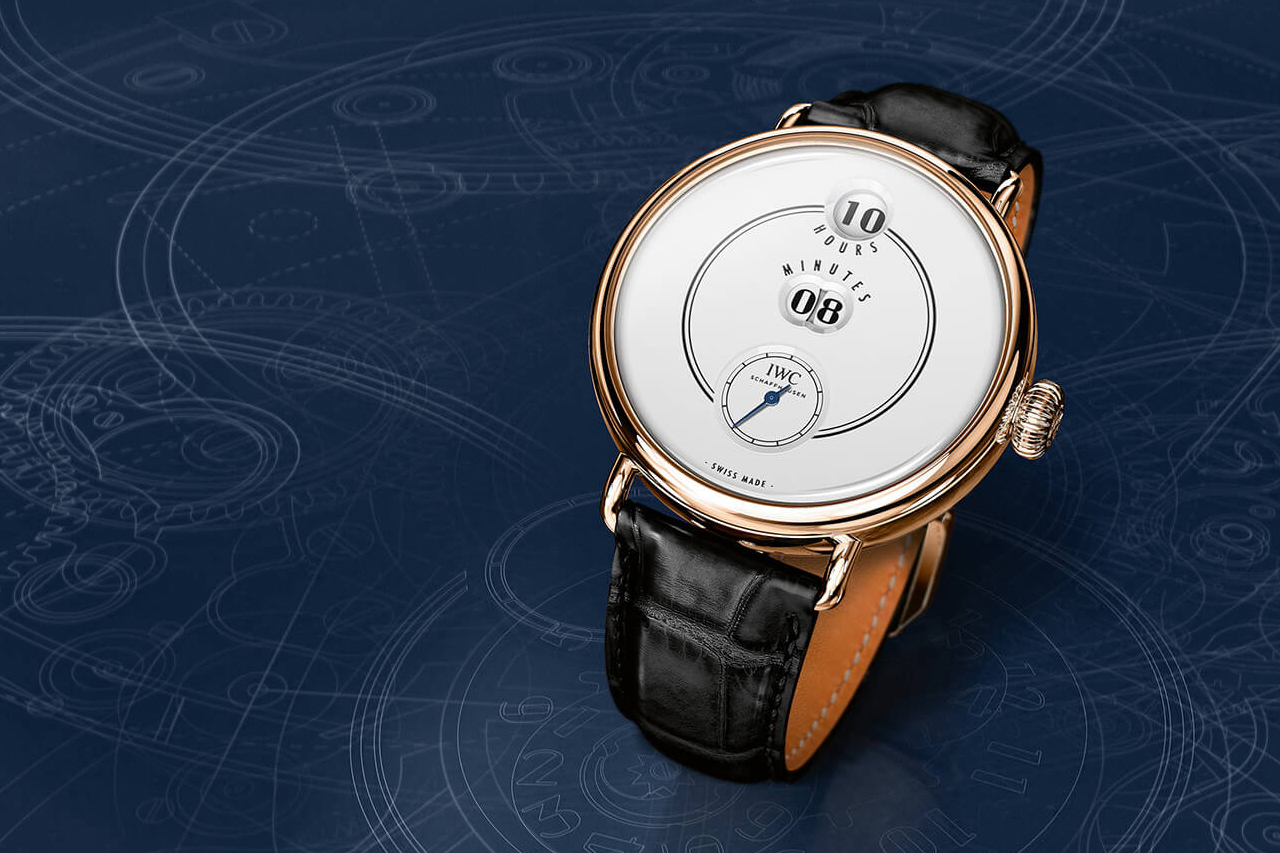 A tribute to the famous Pallweber pocket watches first build a century and a half ago, this homage timepiece maintains the clean, classical look in wristwatch format. It even has the same rounded case and jumping hours and minutes, a rarity at the time and a fun novelty now. 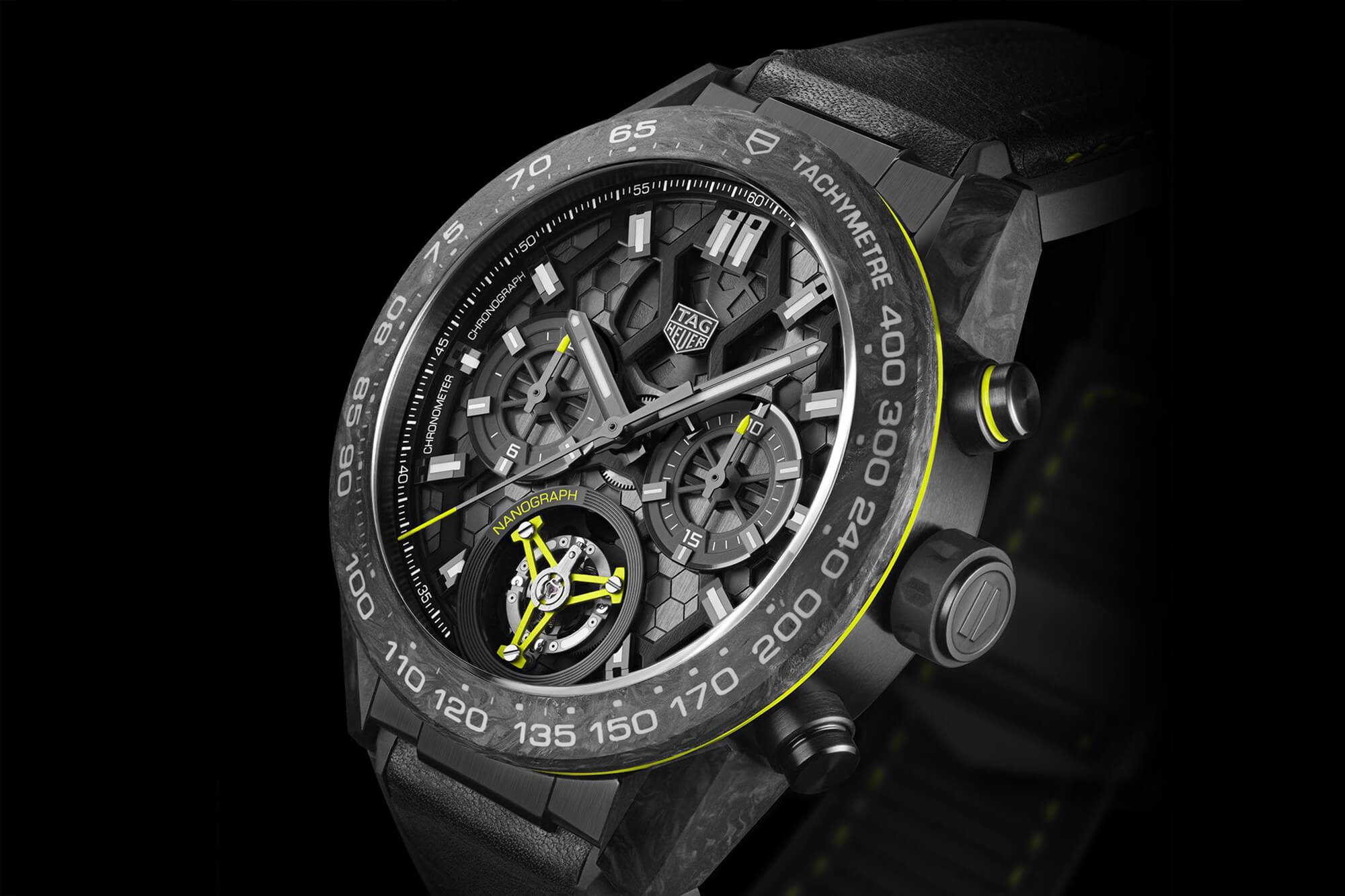 The cover star of our sports issue, there’s plenty to love about the Nanograph, whether that’s it’s hexagonally tessellating dial or the carbon matrix balance spring it references. It’s easily one of the coolest TAGs to date meaning that even if it weren’t a technical marvel it would deserve some serious recognition. 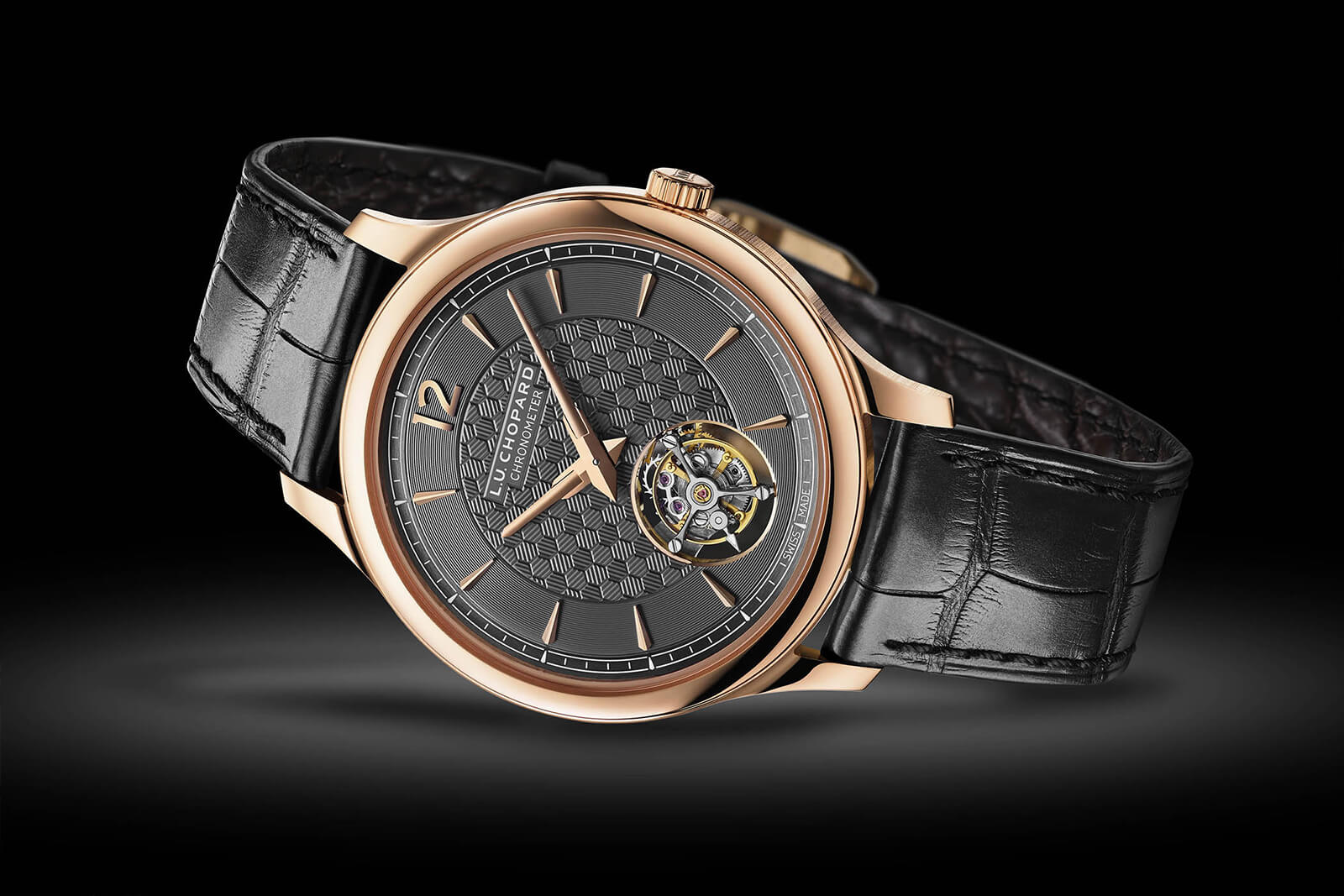 Finally Chopard’s LUC branch is beginning to favour steel and, better yet, military style tool pieces. Granted they’ve a bit of a way to go, but the Chrono One Flyback is a stunning take on a smaller, 1940s-inspired chronograph, particularly with its dark khaki dial. 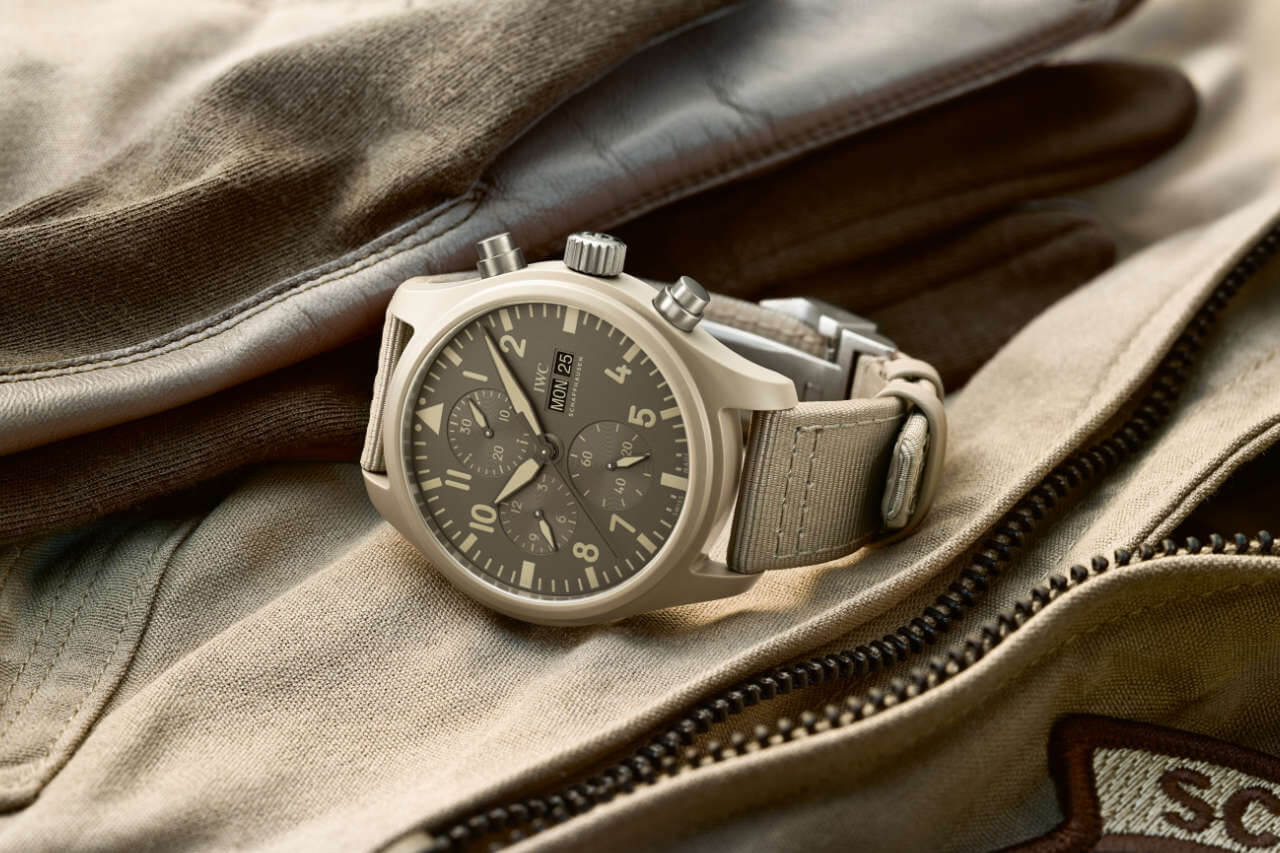 One of our first Youtube reviews, this latest take on IWC’s Top Gun pilots watches is pretty similar to other editions bar one, very obvious difference: the colour. Referencing the sand of the Mojave desert, this new ceramic case transforms the watch from one pilots among many into a striking new high-flier. 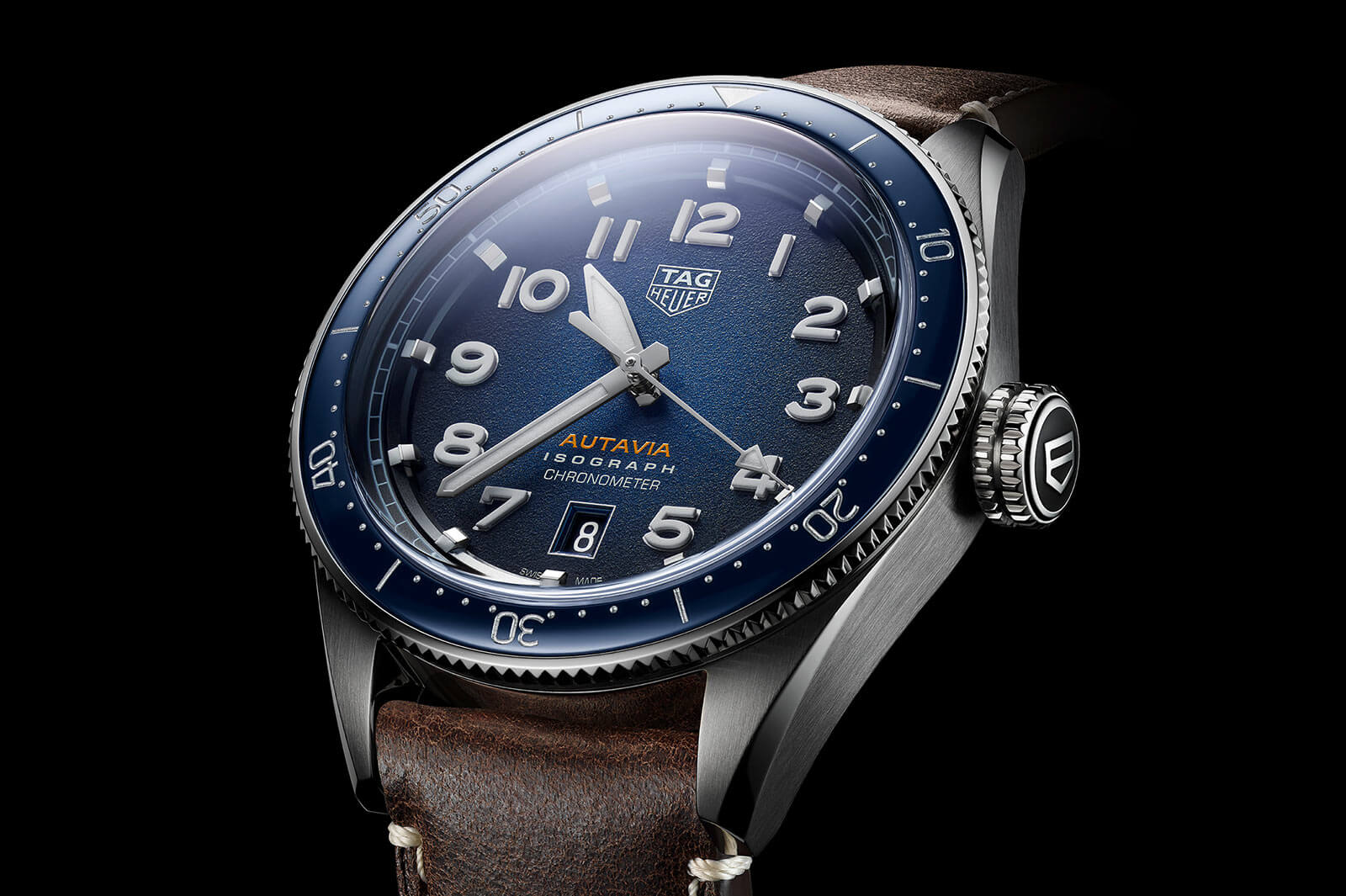 While it houses the same Isograph technology as the Nanograph, the TAG Heuer Autavia is a far more accessible, everyday option for utilising the innate practicalities of a carbon spring. It’s clean, retro look is also incredibly charming and doesn’t shout about the tech inside. Then again, it doesn’t need to, either. 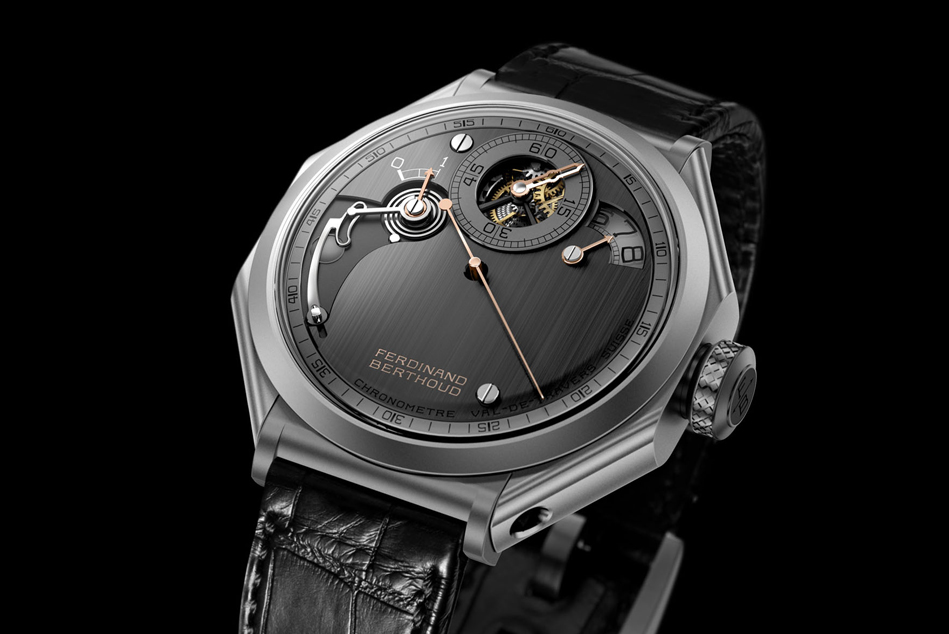 Inspired by a marine chronometer, this ultra-hard steel masterpiece is unlike anything else this year. It’s an intensely technical watch that hides most of its mechanics behind a solid dial, right down to the chain and rocket transmission. In fact, the only elements you can see front side (other than time of course) are the tourbillon and patent-pending power reserve.

Forget Hermes’ design-led pieces, this is true haute horology. The unique moon phase display uses two static moons which are then covered by the twin time-telling dials. These orbit around the watch in a kind of inversion of other moon phase methods. It’s impress watchmaking and, more importantly, stunning.

An update on Habring²’s 10th anniversary model, this particular piece has an award-winning pedigree in last year’s Felix Doppel. To top their previous work, the watchmaker has added a perpetual calendar, creating a unique fusion of contemporary and classical horology. 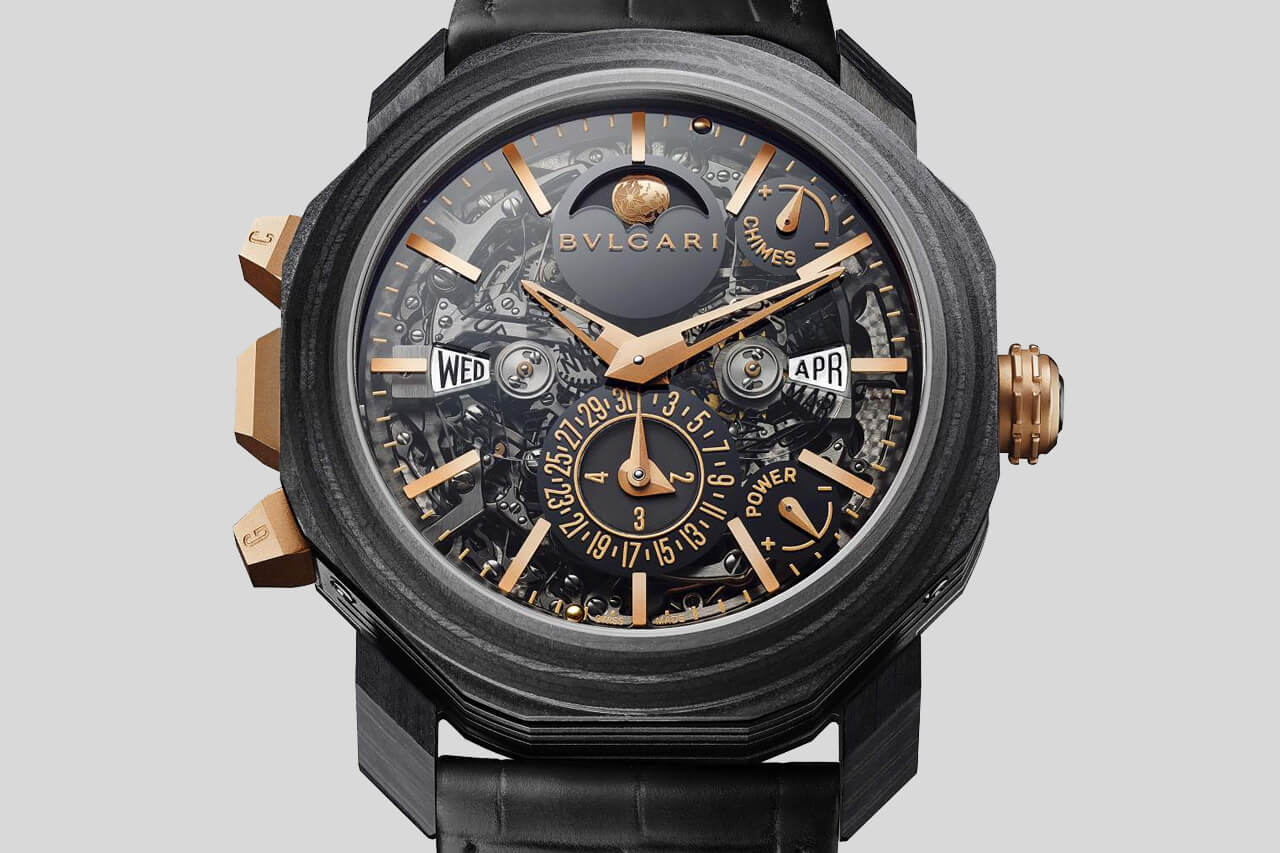 This is a testament to how much you can fit in a watch. Bulgari aren’t subtle in their approach with an openwork dial, but then they should be damn proud of this. Not only does it include a perpetual calendar, but both a minute repeater and grand sonnerie besides. ‘Exception’ doesn’t begin to describe the Octo Roma. 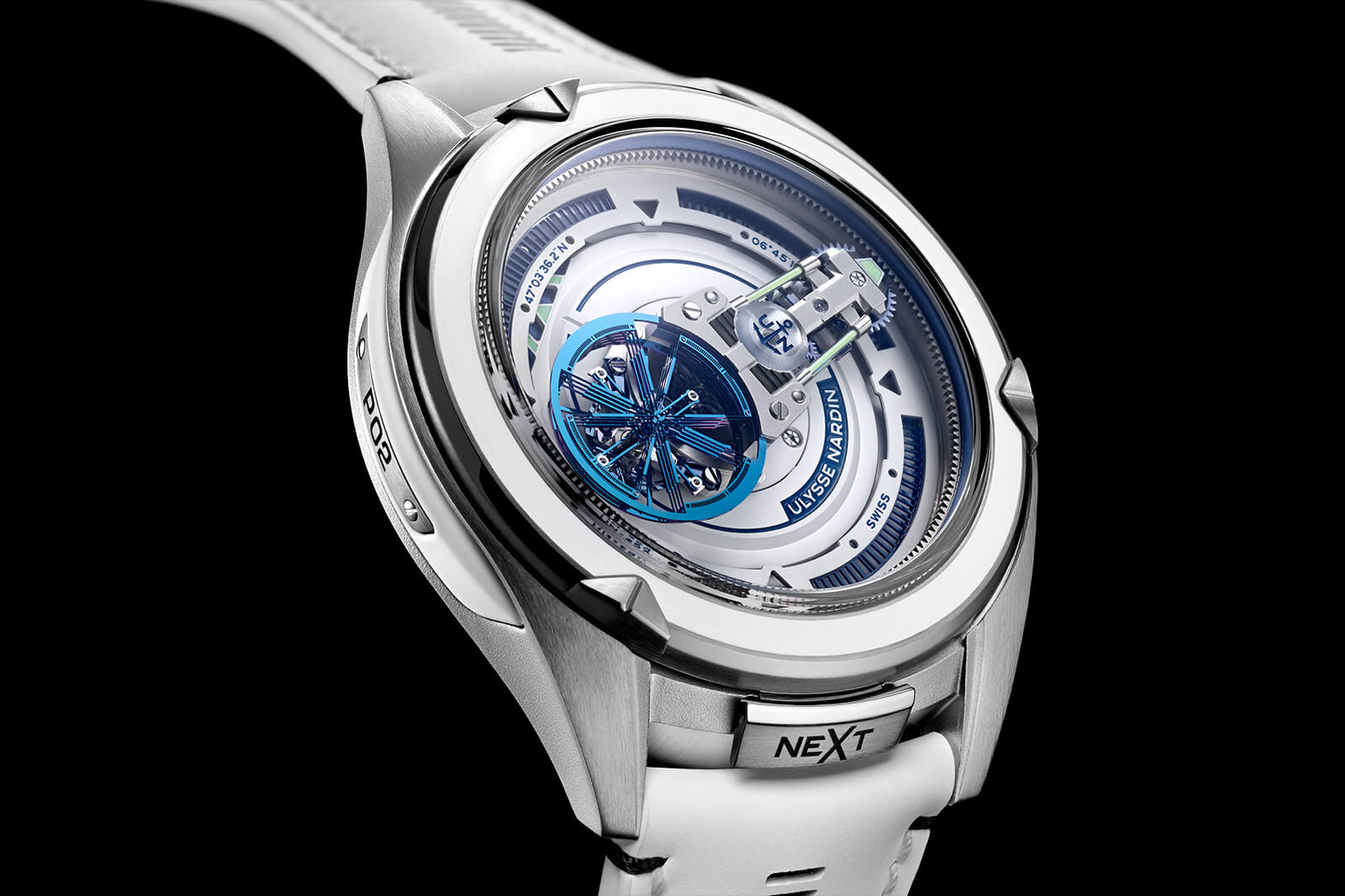 How do you top an avant garde icon like the Freak? With the NeXt. Granted it might be more than a little phallic, but don’t let that diminish the horology, with a revolutionary new silicon flywheel oscillator. Like previous Freaks it’s not for everyone, but it’s hard to deny it’s the next step for a fantastically notorious watch. 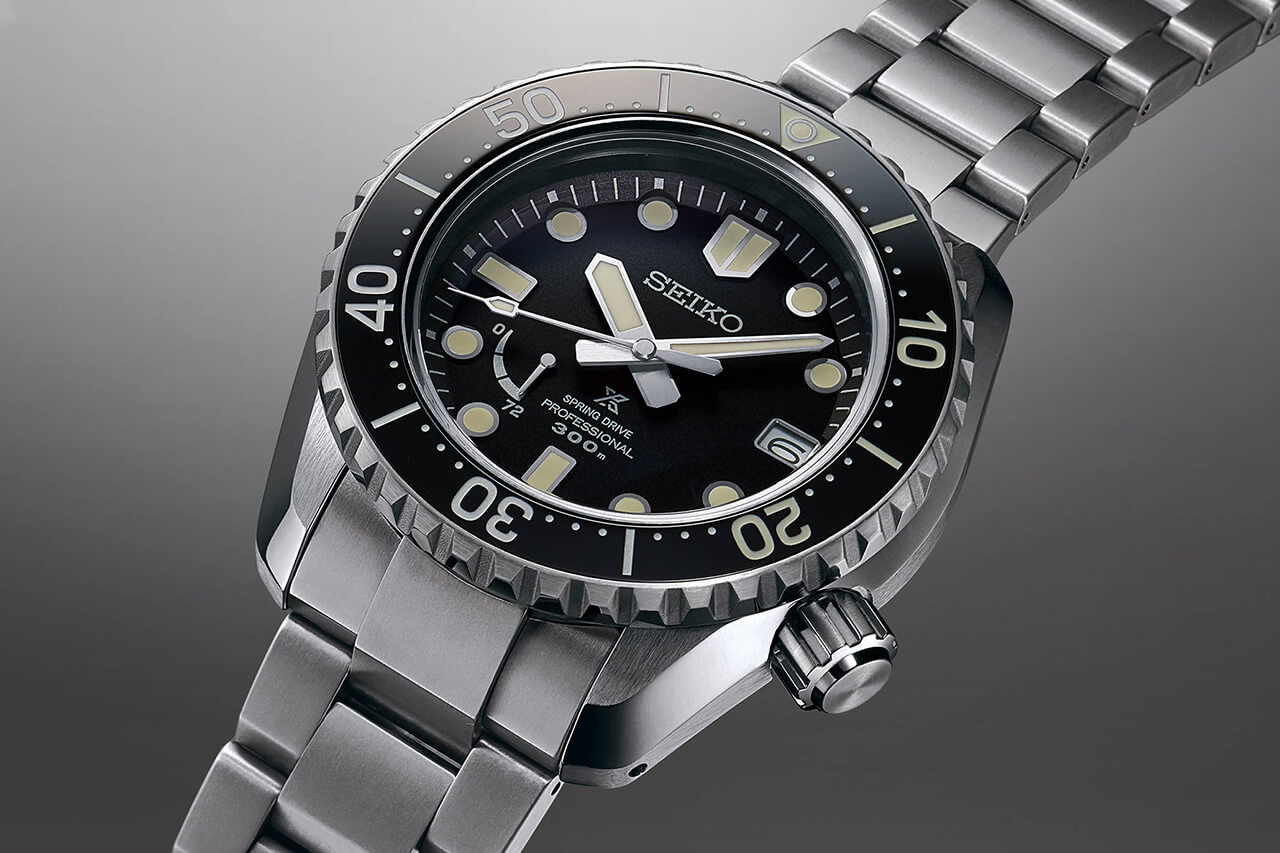 Forget your usual entry-level Prospex divers; this version houses the phenomenal Spring Drive movement normally restricted to Grand Seiko. Housed in a titanium case with the same exceptional level of finishing that Seiko’s upper class sub-brand is known for, this is an elevation of an accessible classic and it’s hard not to love. 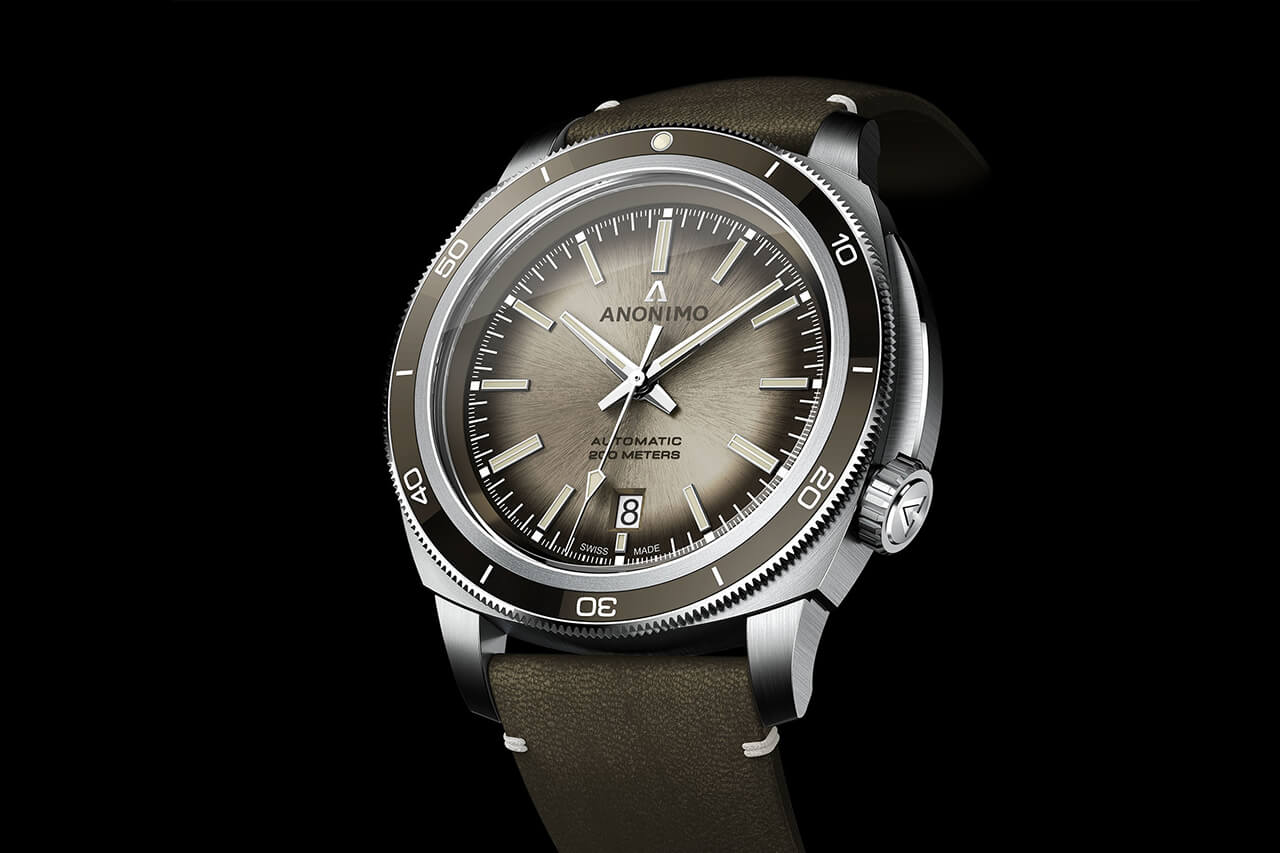 To call this an everyman’s Panerai might be close to the truth, but it diminishes the fact that this is a brilliant diving watch all by itself. A perfect, chunky vintage diver with its crown at 4 o’clock, Anonimo has hit the nail on the head when it comes to tool watches that look just as good on a yacht. 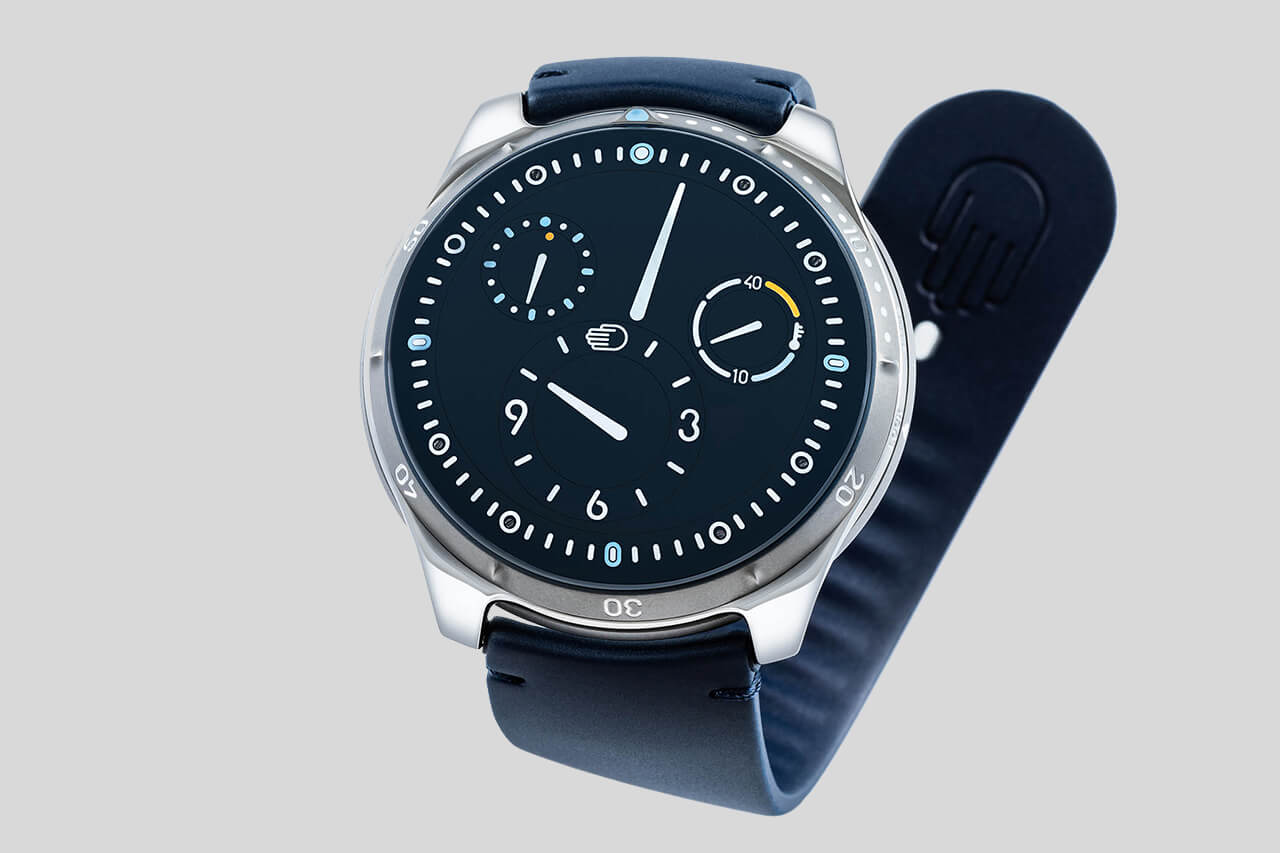 Perfectly legible underwater, able to go to extreme depths and looks like it should be on the wrist of an Apple executive? It’s hard to say what I love about the Ressence Type 5 most. Sure filling a watch with oil seems a little odd, but when the results are like this I’m left wondering why nobody else does it. 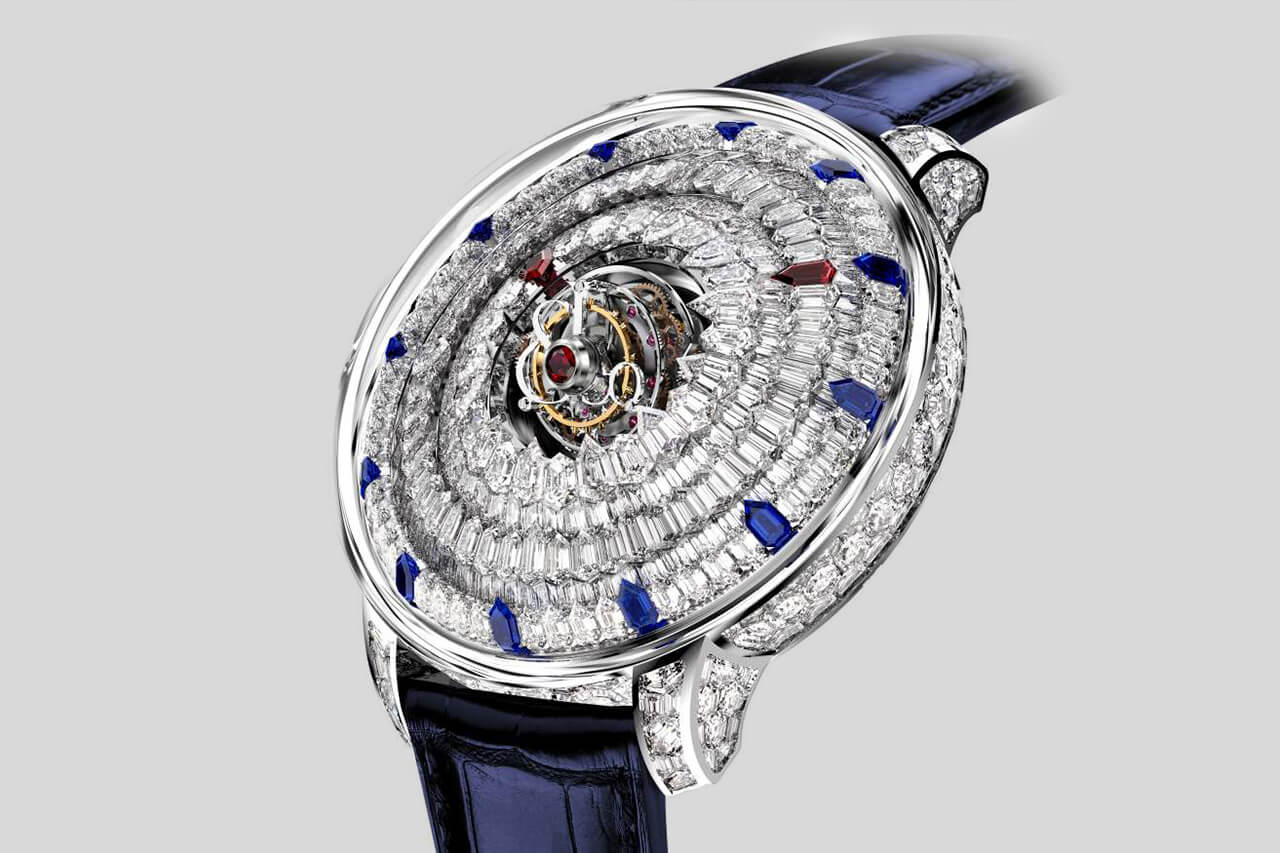 Trust Jacob & Co to create something this extremely… shiny. The titular tourbillon turned apparently without support at the centre of the watch which is from there on covered entirely in diamonds, rubies and sapphires because of course it is. Subtlety incarnate. 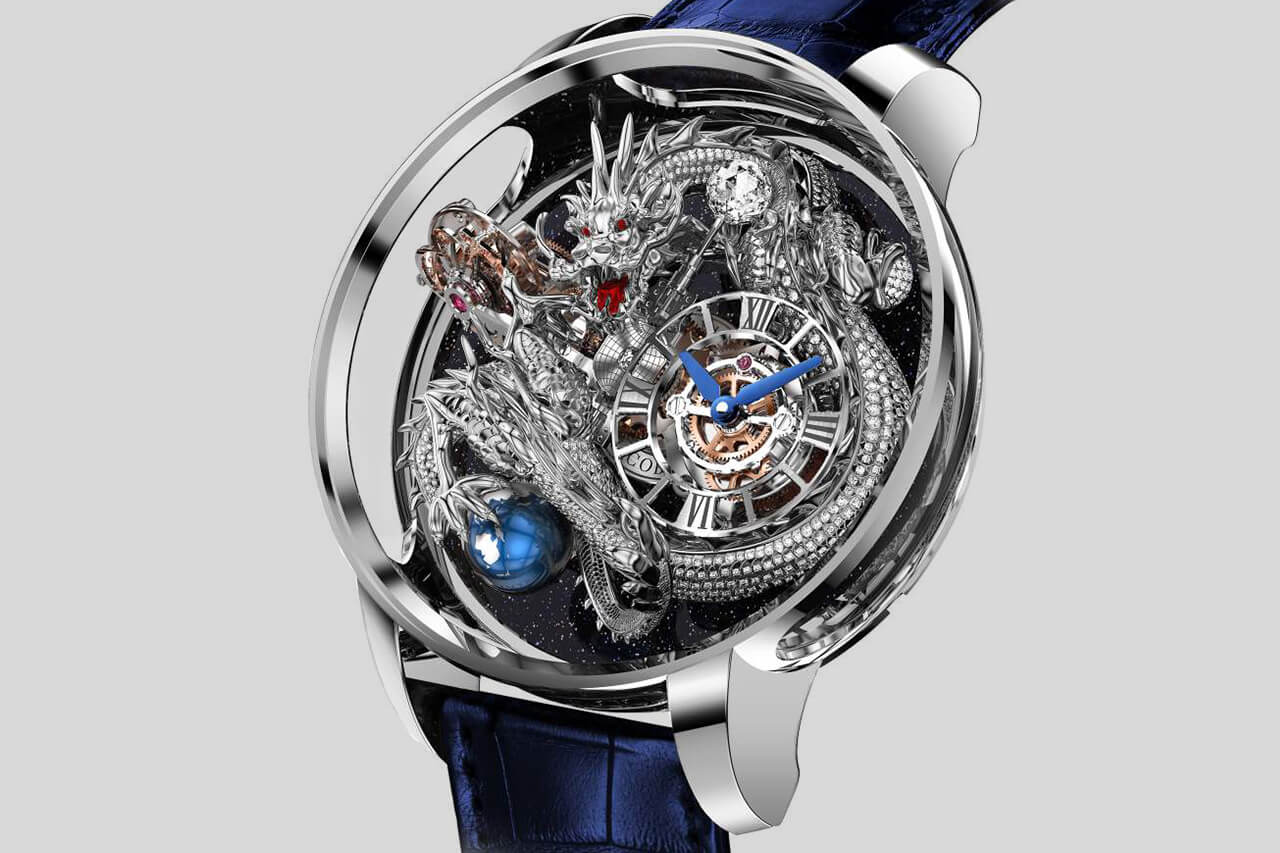 Saying this is more subtle than their jewellery entry it true but not saying much. An artisanal update of the brand’s famous Astronomia planetarium watch, here the world is being conquered by a grandiose Chinese dragon. Godzilla must be shaking in his boots.

The Grand Prix d’Horlogerie de Geneve will be held at the Théâtre du Léman in Geneva on November 7, 2019. For the full shortlist visit GPHG’s website. The German watchmaker heads outside their comfort zone with its first-ever travel-focused watch...