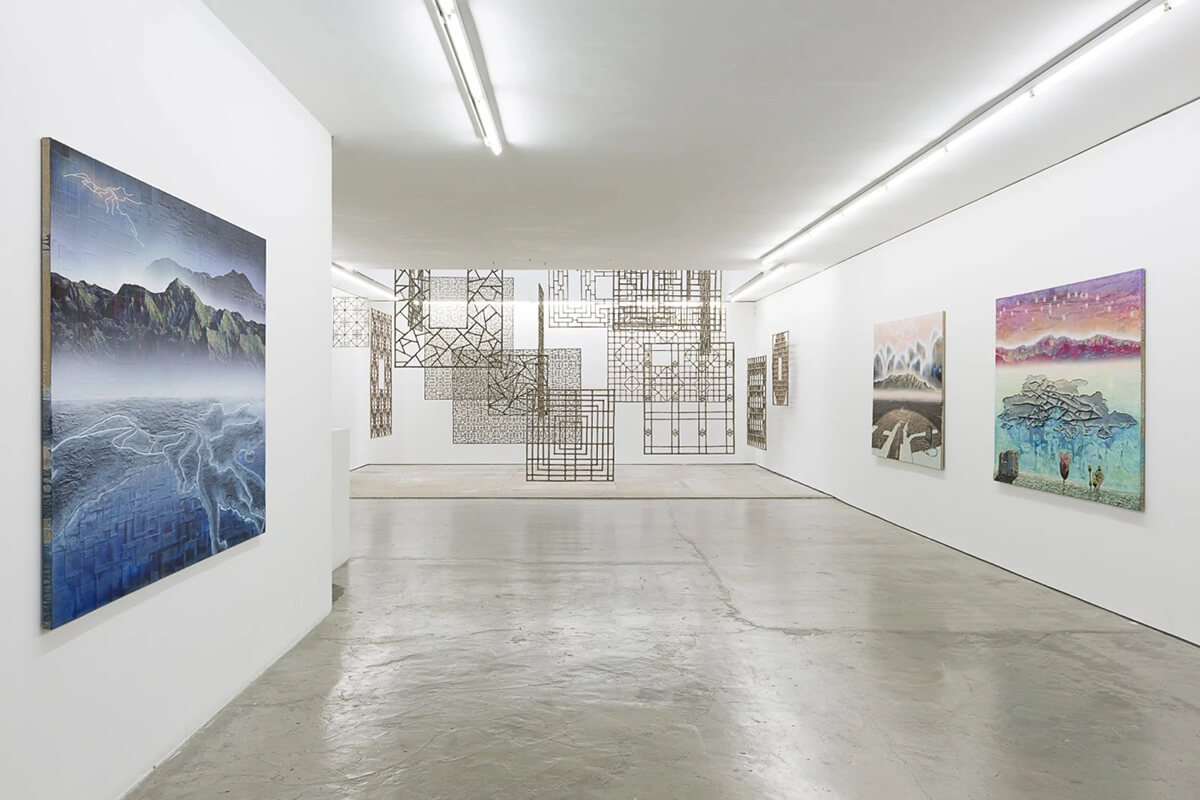 China is many things to many people. For some it was a place they backpacked around right after uni; for others it’s a great unknown waiting to be explored. For some it’s the most valuable trade partner they could ever have; for others it’s an economic rival. The one thing we can all agree on is that it’s one of the most powerful players on the global stage.

With that kind of power, however, comes sacrifices – those that contemporary artist Gordon Cheung is apt to hold a mirror to. A Central Saint Martins graduate, Cheung seems fascinated by the collapse – or potential collapse at least – of civilisation, whether that be moral, environmental or cultural in nature. Exhausting as it must be to see the apocalypse coming in everything, it leads to some poignant works – and in his latest solo exhibition at London’s Edel Assanti gallery, dubbed Tears of Paradise, he turns his canvas towards the developing industrial giant of China. 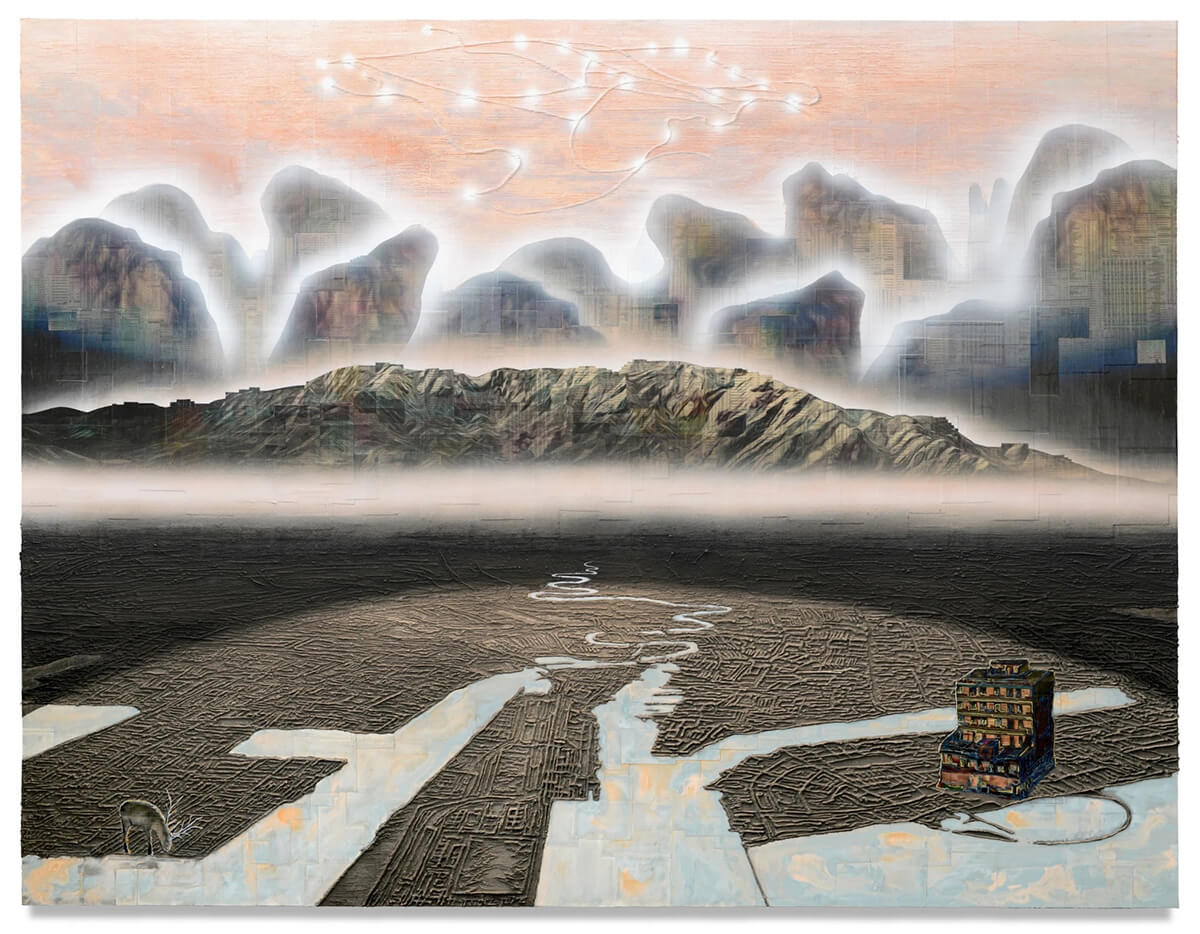 Rather than simply taking a snapshot of the current state of the nation, Cheung attempts to frame China’s modern drive for dominance in a more historical context, namely the ‘Century of Humiliation’ and Opium Wars: the times when the Western world came into conflict with and greatly harmed the country. It’s an interesting conceit for an exhibition and one that fits nicely with Cheung’s own style.

Throughout the five paintings in Tears of Paradise he depicts the futuristic cityscapes of today’s and tomorrow’s China, the modernistic ideal that is developing now and planned for the near future. These include the planned consolidation of some of the world’s busiest cities into inconceivably vast urban expanses. In Jing Jin Ji, Cheung expresses this consolidation with the floating masses of Beijing, Tianjin and Hebei, drifting on purple oceanlike prehistoric continents. 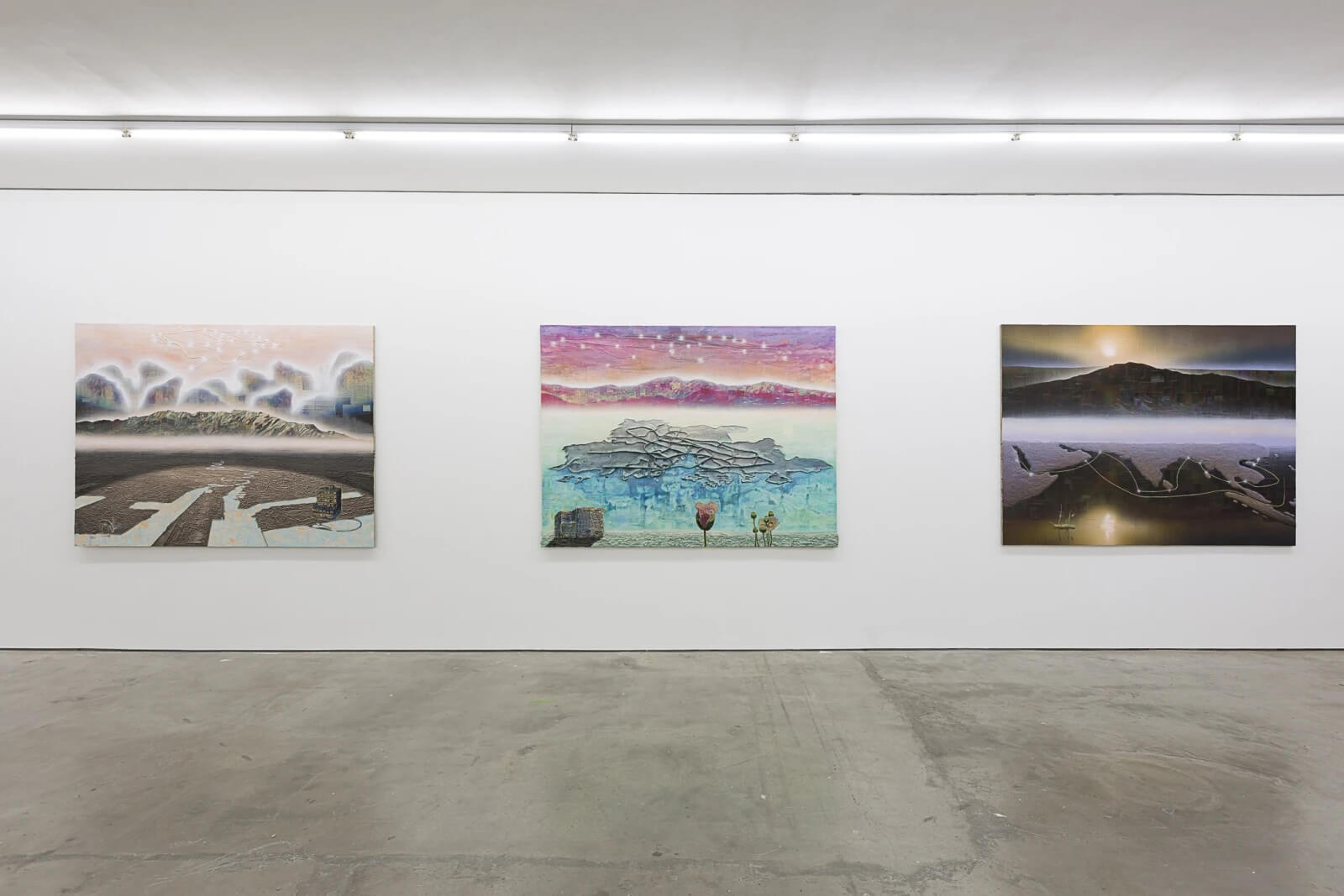 There’s something mystical about the painting, with the mountain rising in the background, but the way it’s constructed is anything but. Cheung uses a mix of acrylic, inkjet, sand and the Financial Times newspaper to give his works an almost illusory look, seeming to glow and adding to the science fiction, futuristic feel.

The combined city masses can be seen more clearly in the aptly-named Megalopolis, where the foreground is dominated by an endless concrete mass split by a curving river. There’s a notable split between that grey mass and the mountains beyond, a stark divide between the new, man-made modernity of China and the more spiritual connotations of the land that was there before. 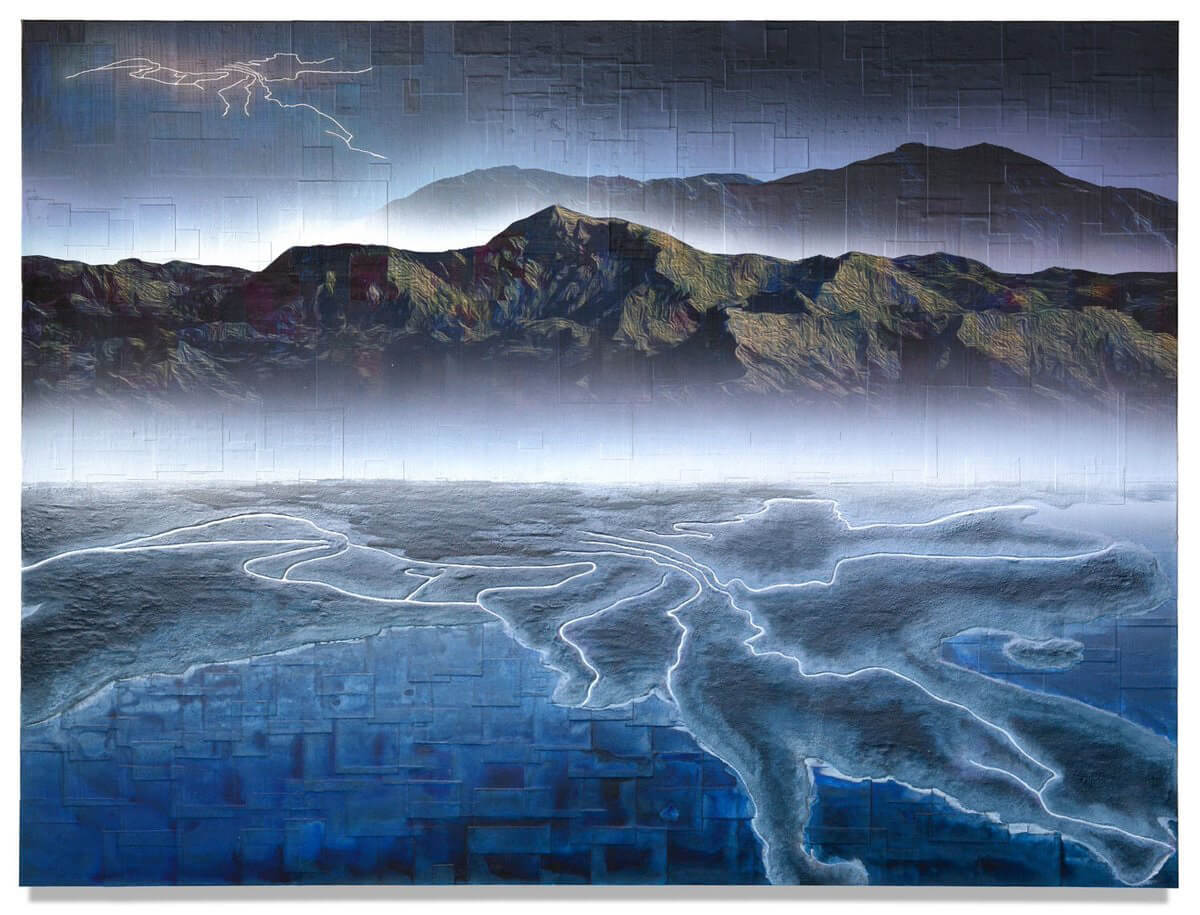 Taking a wider approach, String of Pearls looks at the Pearl River Delta area and the nine prefectures that, when combined, have a population of 120 million people. It’s my personal favourite of Cheung’s pieces in this exhibition, in large part due to the sailing ship in the bottom left that links it to the canvas of Chinese history. 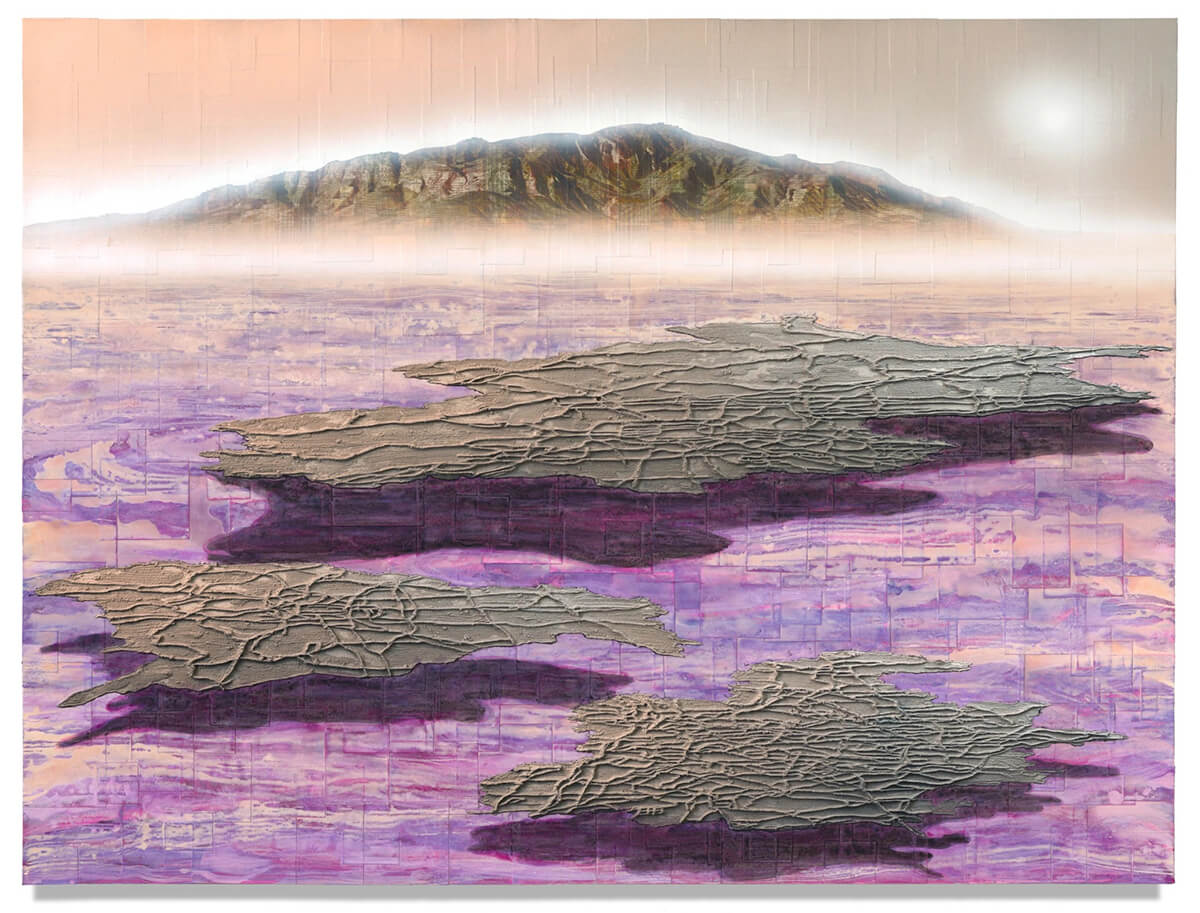 Many people have many opinions on China as a global entity, just like everyone has a different opinion about us. But no artist has managed to capture the precarious balance that China is in like Cheung, the seemingly impossible developments underpinned by a drive to succeed like nowhere else in the world. The future for China is coming and the paradise it once was weeps for it. From Nike X Parra kicks to a rare Breguet, Lymited offers equal-opportunity access to them all. Rather than be defeated by COVID-19, artists are inviting viewers to view their new exhibitions...