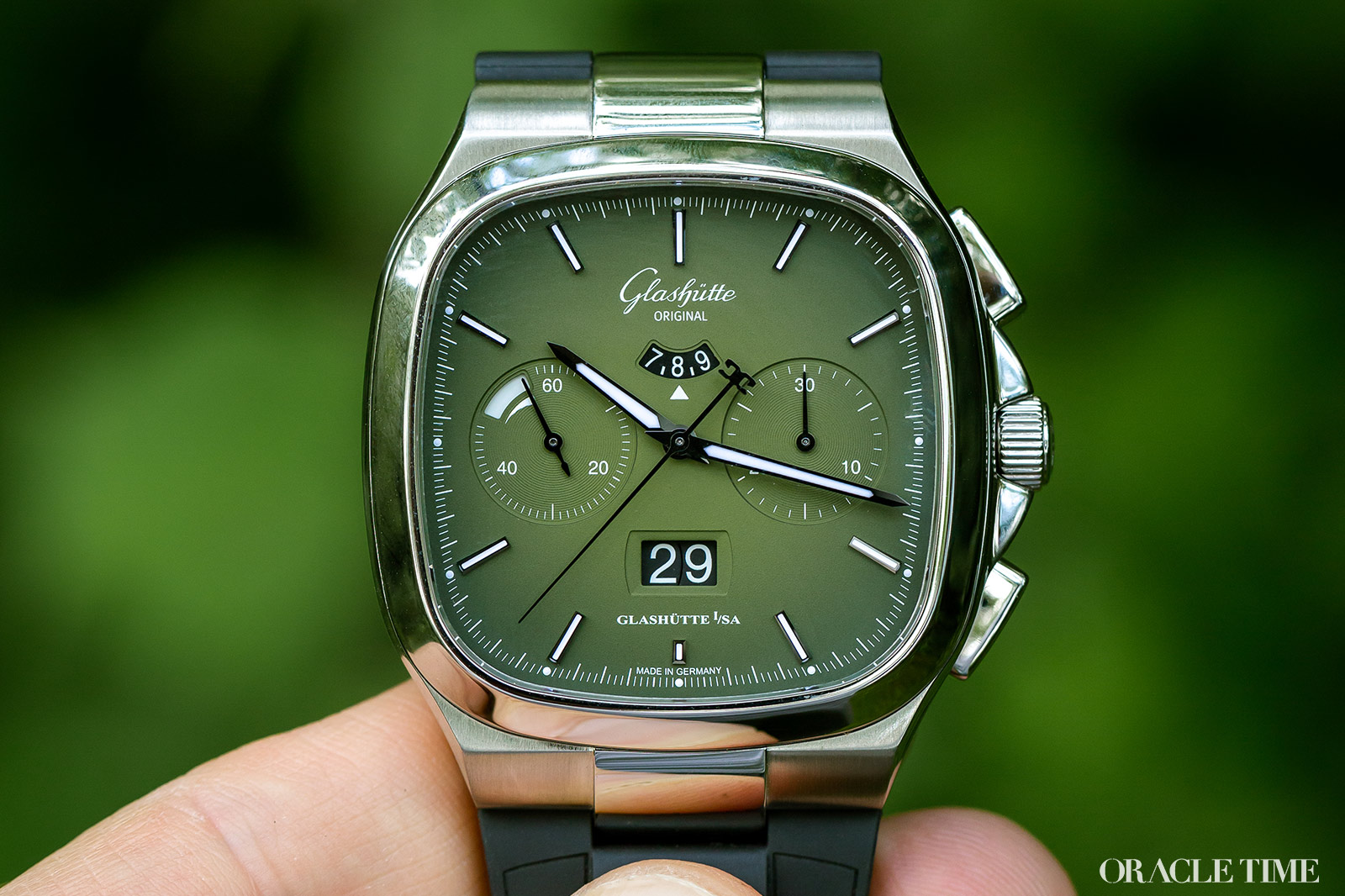 Retro’s enough of a buzzword these days to have become a little passe. Despite a solid five years of re-issues, revivals and re-creations, archives around Switzerland and beyond are still gushing forth modernised heritage designs. The zeitgeist has become one of vintage nostalgia. But arguably one of the brands to really kick it off began their rose-tinted campaign back in 2007. In front of me I have that same watchmaker’s latest retro timepiece, the Glashütte Original Seventies Chronograph Panorama Date Green.

As a collection, the Seventies is more obviously retro than the classically flavoured Sixties, which was GO’s original vintage inspired watch. The angular, squared shape of the Seventies is a perfect tribute to the kind of TV-shaped cases that were popping up in its titular decade, presented here with a 40mm diameter in stainless steel. It also avoids the Genta-inspired shapes that have become eye-rolling shorthand for the period, thank God. I like the aesthetics of the Royal Oak and Nautilus – who doesn’t? – but enough is enough. 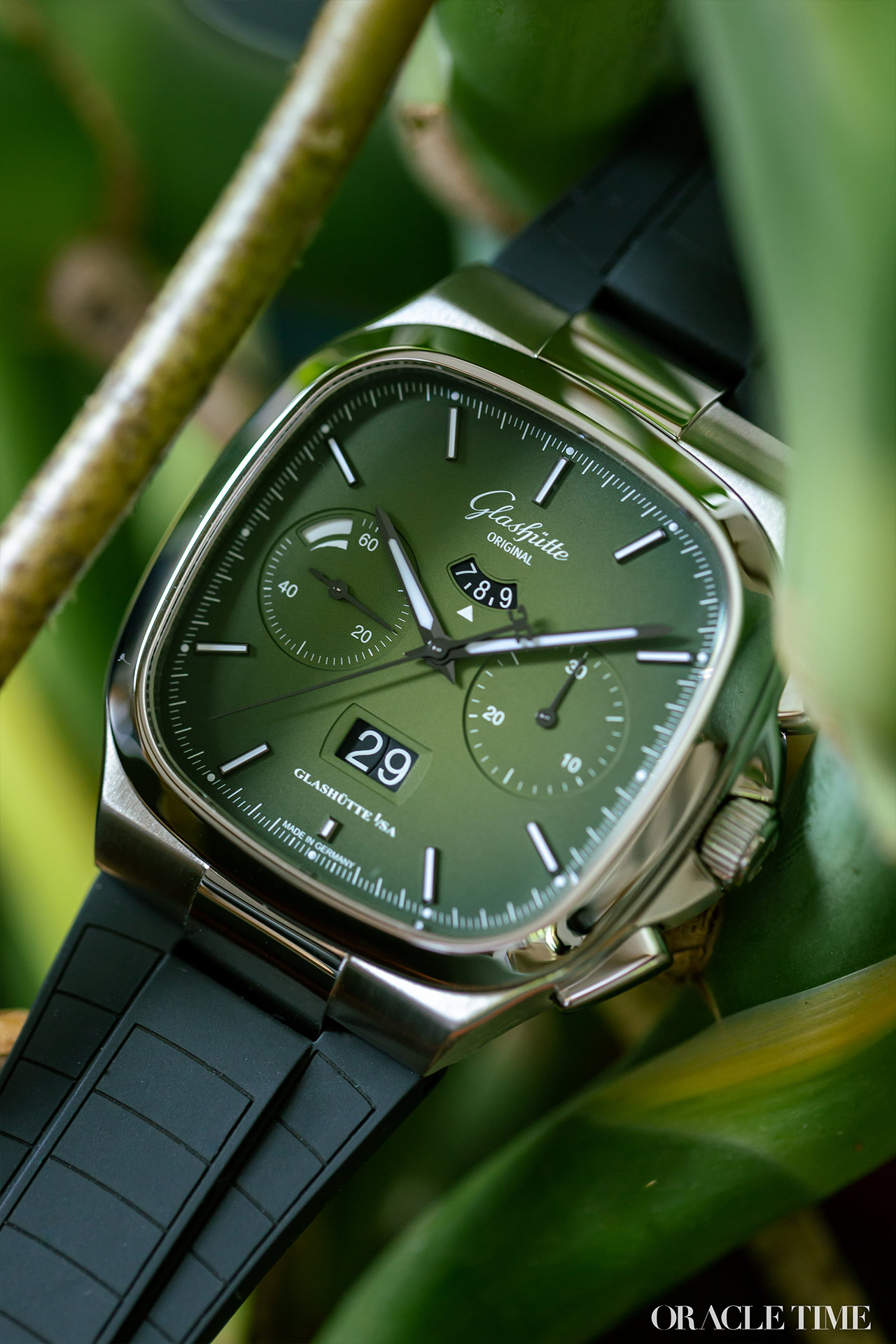 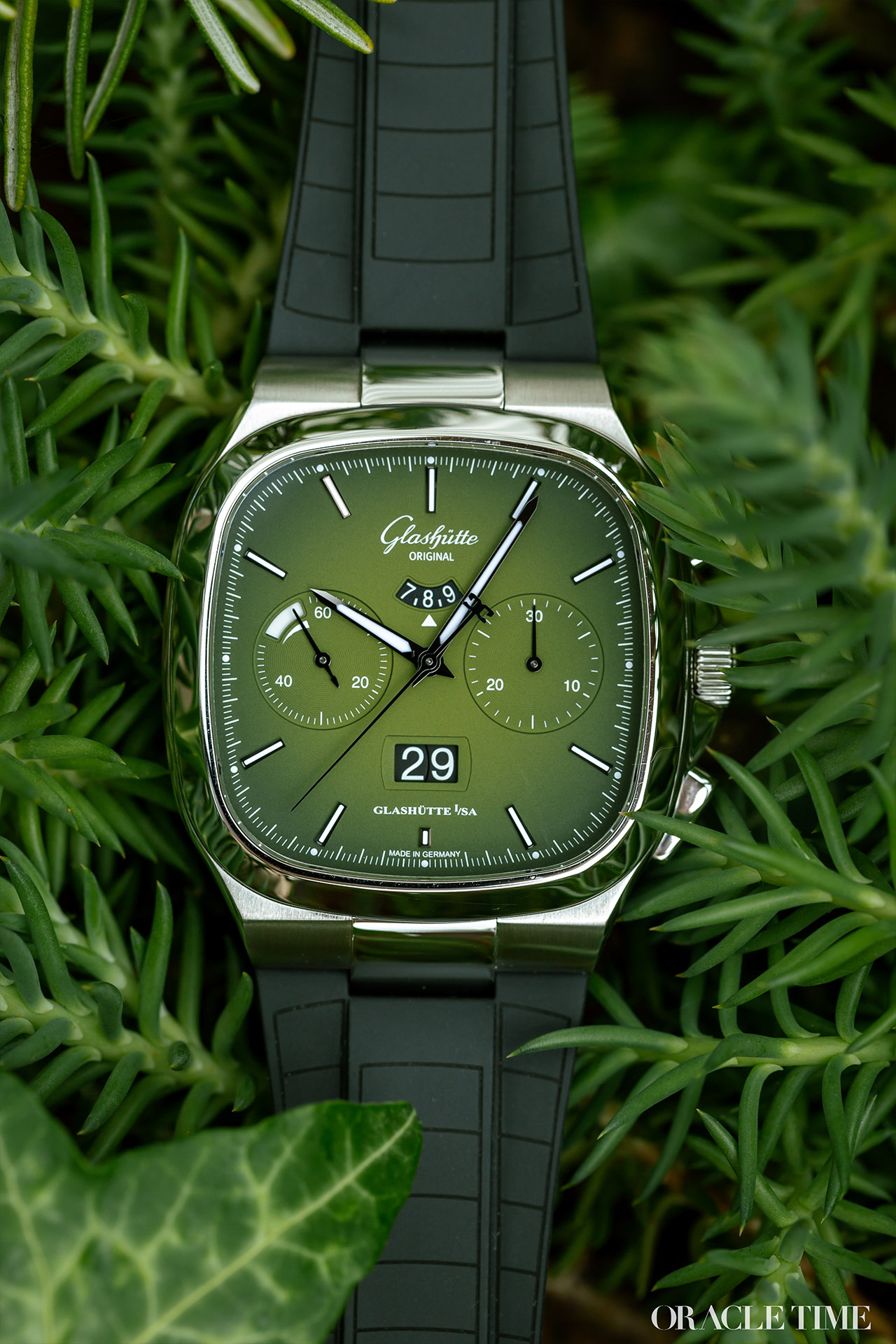 The Seventies is also, very firmly, a chronograph. Because of that, its aesthetic is a fair bit more technical than the Sixties. Instead of beautiful, artistic numerals, GO has amped up the sporty vibes with thin, angled indexes and a more prominent minute ring (square?) around the periphery.

Not that it’s some kind of performance racing stopwatch now. The Seventies is still stripped back and minimal for a chronograph, opting for a (of course) bi-compax layout and tone-on-tone subdials. Those subdials are particularly important because, like the Sixties before it, the Seventies is all about colour. Case in point, the fab green used here.

Sure, your mum might be the only person that can get away with saying ‘fab’ these days, but it’s one hell of a colour. The fume dial is a lot brighter than the previous, emerald green of the Seventies, and ranges from a forest-adjacent hue in darker spaces to a summery, grassy colour in direct sunlight. It’s not quite as eye catching as the crazed orange of previous Glashütte Original vintage models, but I could quite easily see myself wearing it on the rare days it’s actually sunny out. 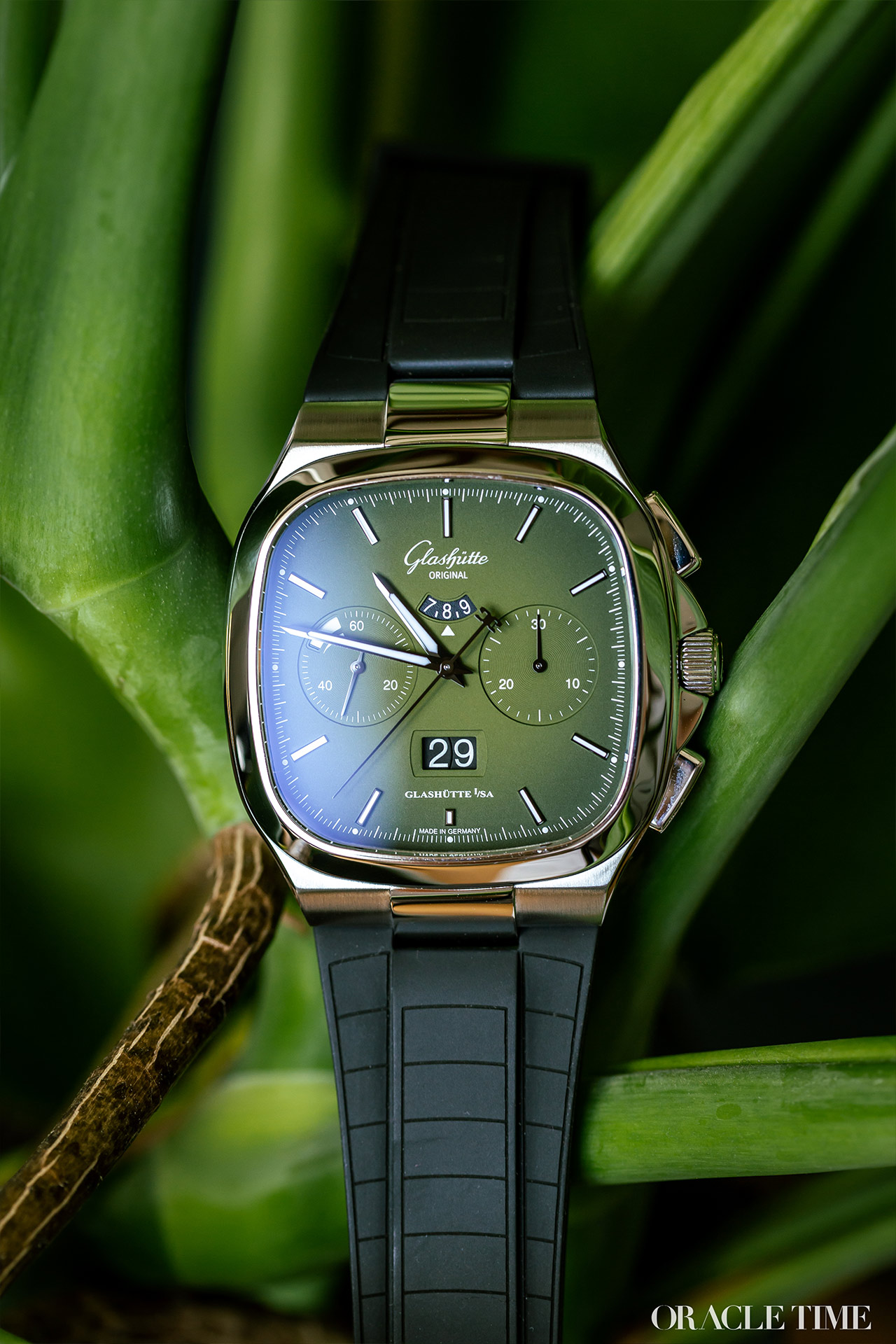 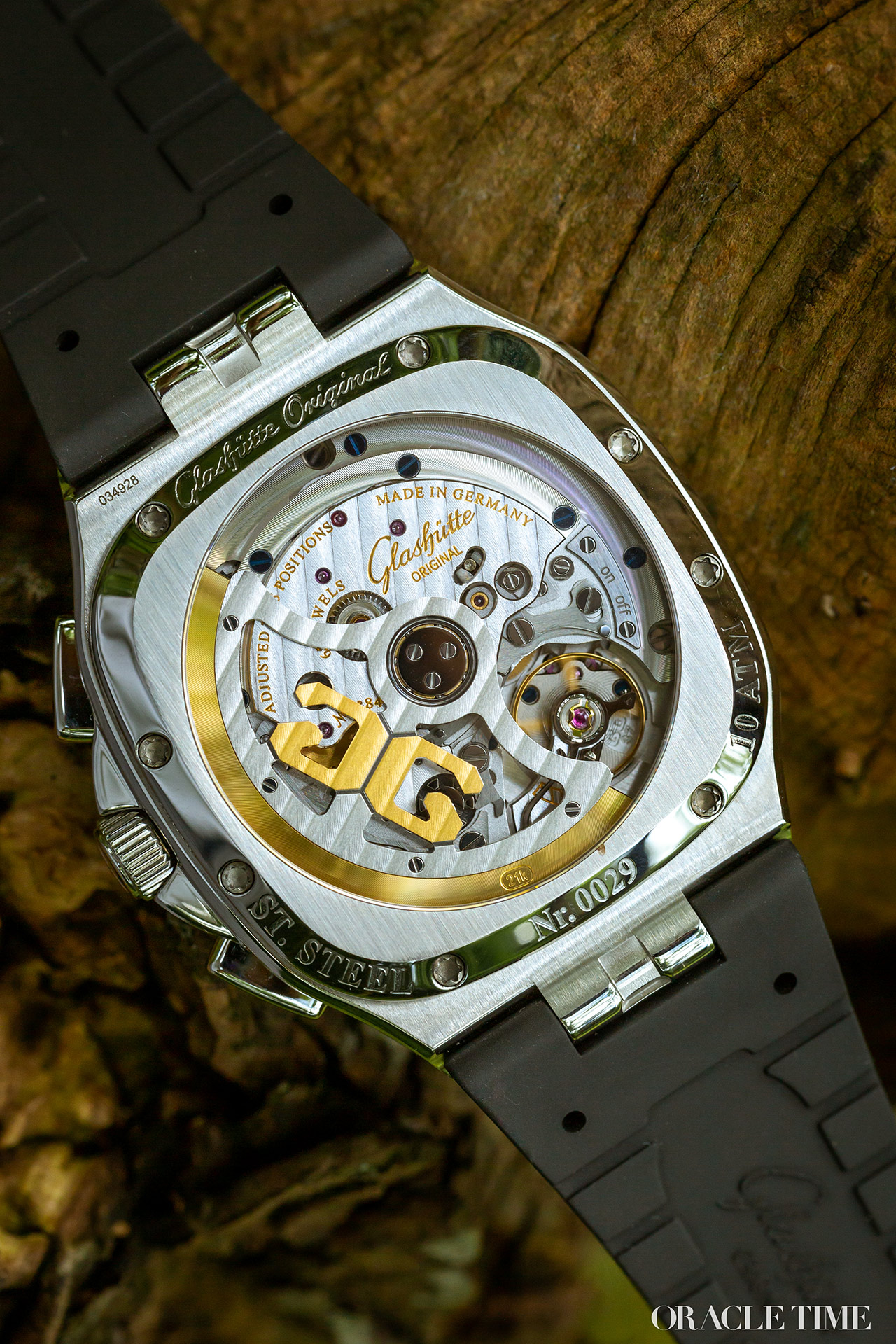 Aside from the colour and new lumed indexes – I’m not sure why that’s a first for the collection but there you go – it’s the same as other Seventies Chronograph models. That means Glashütte Original’s signature oversized Panorama Date window at six o’clock, chronograph hours in a curved window under the logo at 12 o’clock, and a power reserve subtly integrated to the running seconds subdial at nine. It shows off a lot of information clearly, cleanly and with as little fuss as possible.

Behind all the indicators is the calibre 37-02, a solid column-wheel chronograph with an even more solid 70-hour power reserve. It’s actually a flyback chronograph too, which with its other features means it has everything you could realistically want from a chronograph. In fact, it’s enough to make me daydream about a racing edition of the Seventies. Perhaps with some seriously funky racing livery? 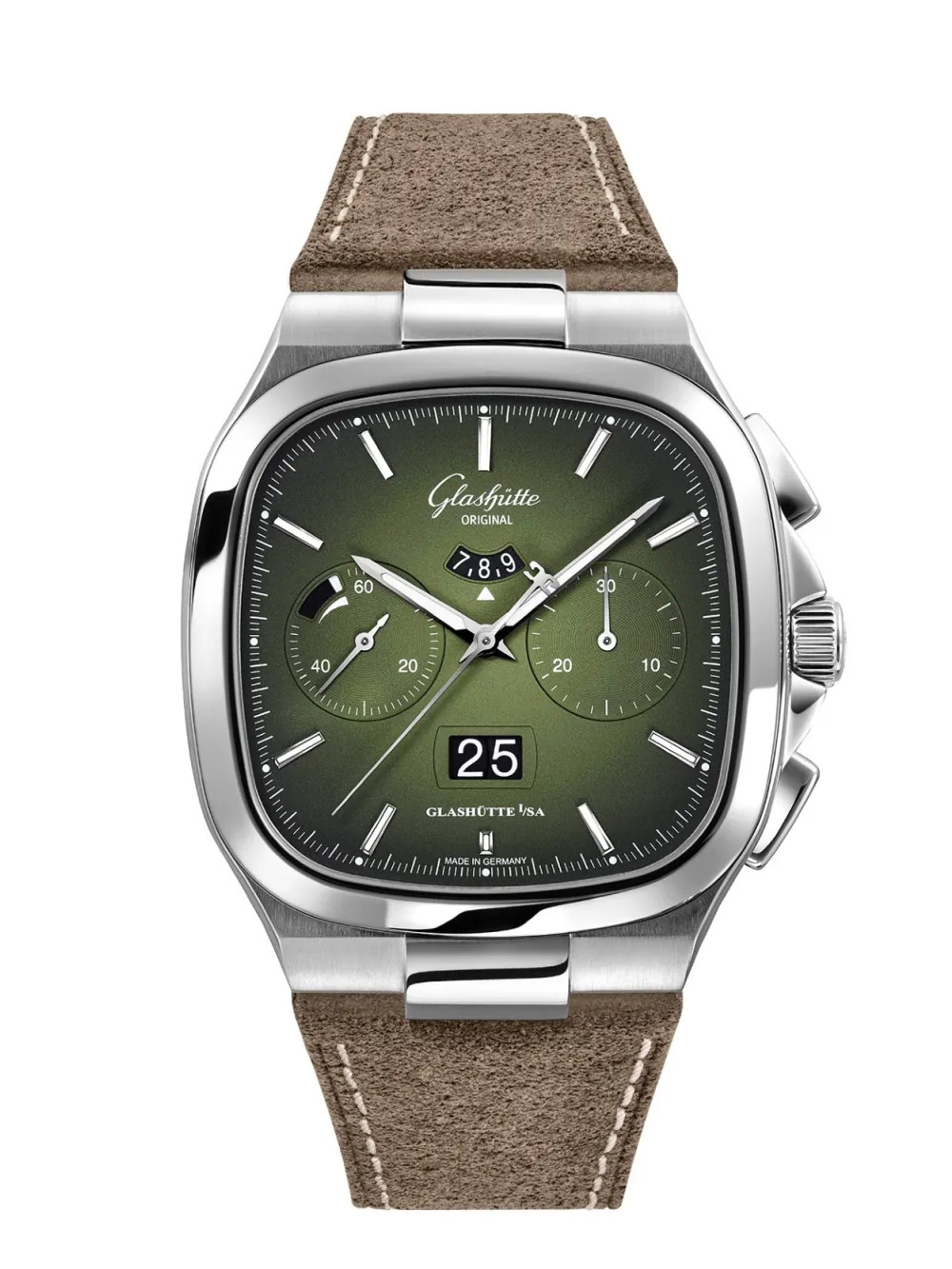 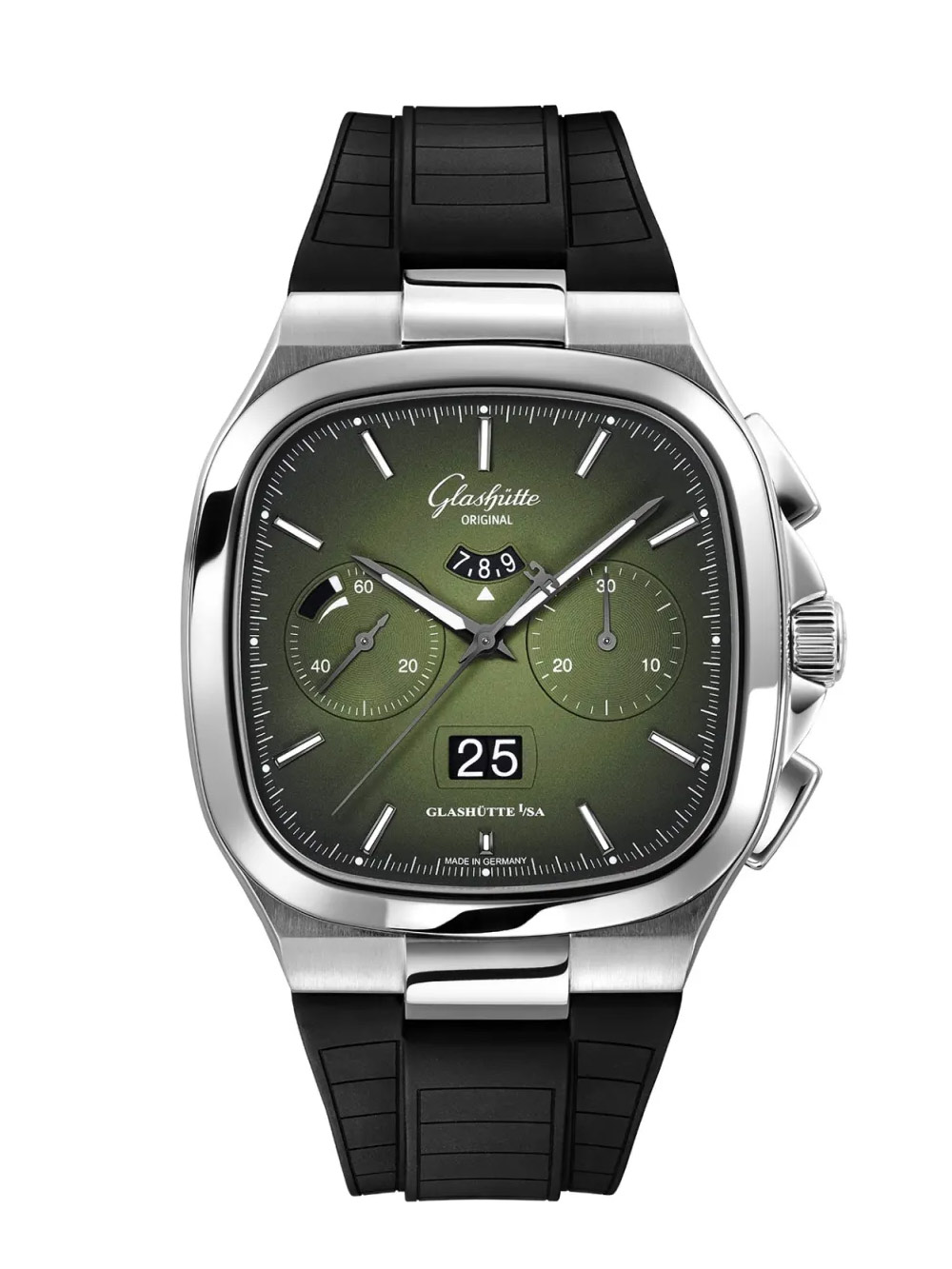 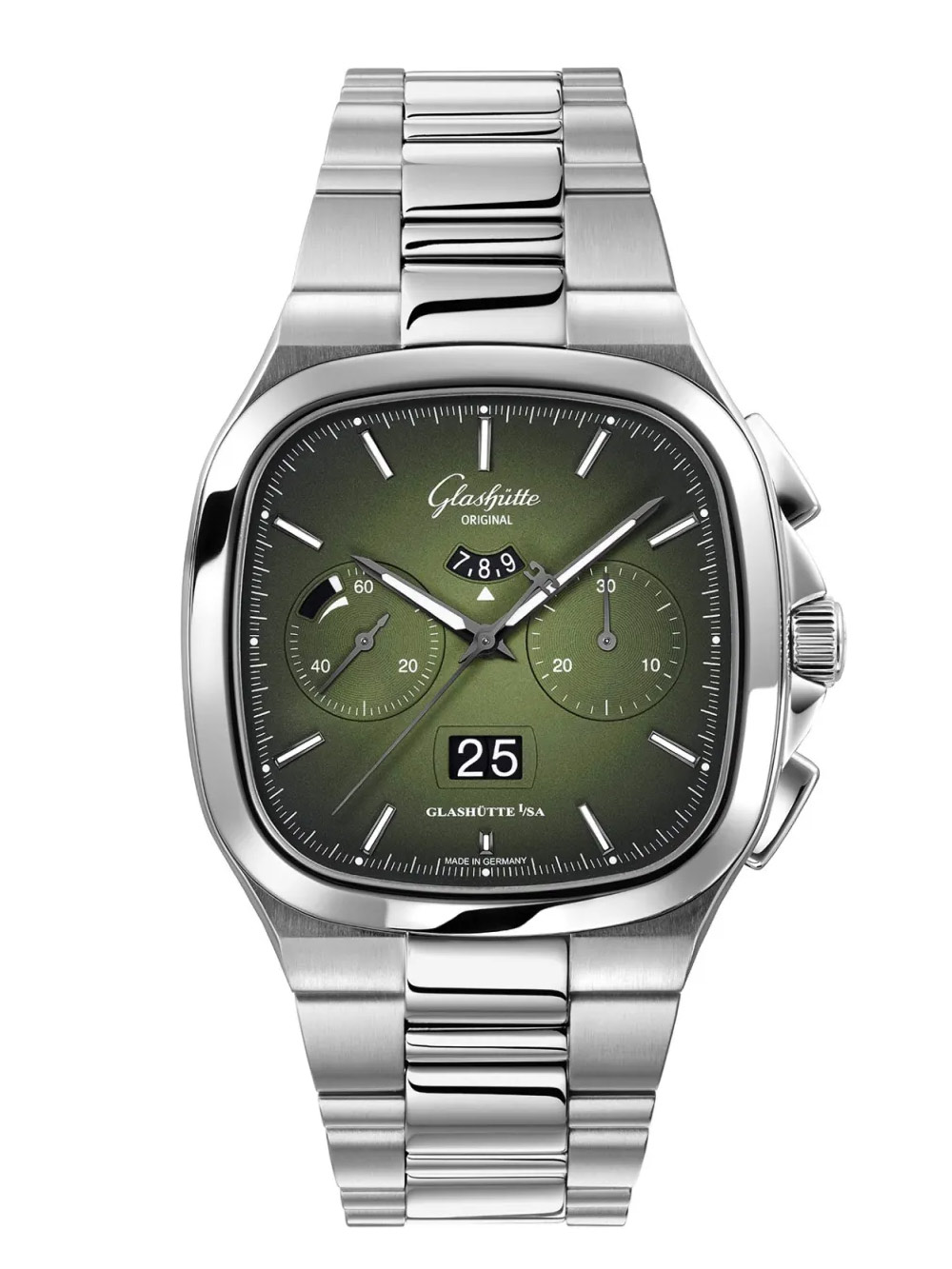 On the wrist, it’s downright lovely. At 40mm across it’s relatively svelte for a chronograph, though obviously the squared case makes it sit slightly larger than your prosaic round number. The way the dial colour shifts in the light is charming as hell, though it does look best by far with the brown-grey nubuck as opposed to the bracelet. Or there’s the black rubber, but having tried it out it’s probably best avoided in all honesty.

Either way, the Seventies are here to stay and while as a collection it might have less history than, say, Breitling’s revamped Navitimers or Rado’s Captain Cook range, the German watchmaker has still managed to nail what might be the dictionary definition of a retro luxury watch without falling into the usual ‘sports luxe’ tropes. That said, if any timepiece would suit a Tiffany blue dial…