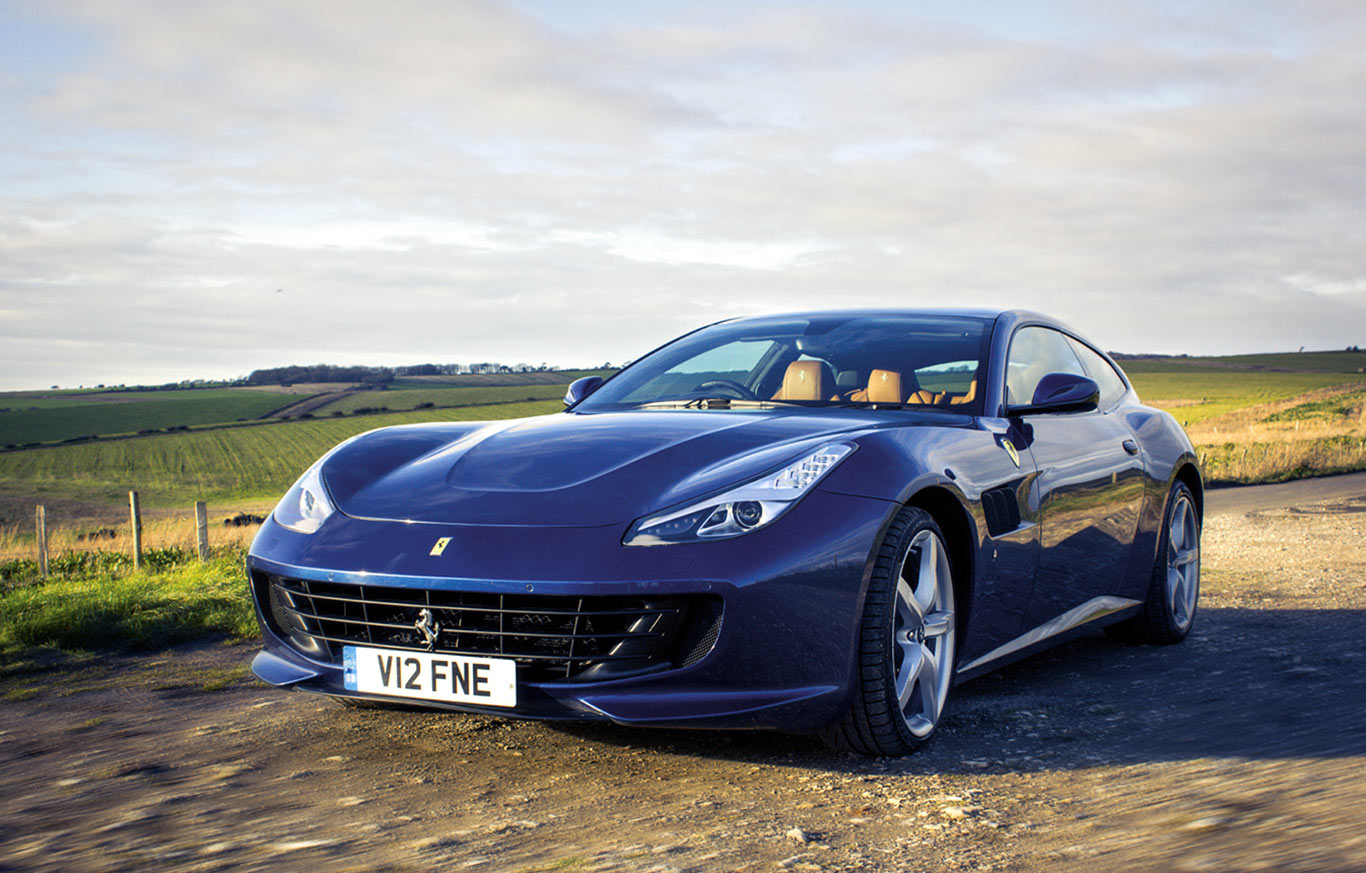 It’s the middle of December. It’s cold, it’s wet and come sunset it’s bound to be icy. Not exactly the conditions that are conducive to driving a V12 Grand Tourer full pelt through the English countryside. However, here I am, on top of the South Downs, photographer in tow, blasting up and down a narrow single track like a child while he tries to take a decent photo. The car in question surely must be one of the new breed of rugged SUVs that seem to now be plaguing the road currently, right? Well not really, though I suppose the GTC4 Lusso is about as rugged as Ferrari currently get. I say currently, as it looks like we will see a Ferrari SUV soon, something that most Maranello fans probably don’t want.

In a first for Ferrari, the GTC4 Lusso is available with two different engine options: a naturally aspirated V12 and a twin turbo V8 version. While the V8 is more likely to hold its value better, who could possibly resist owning a V12 Ferrari? 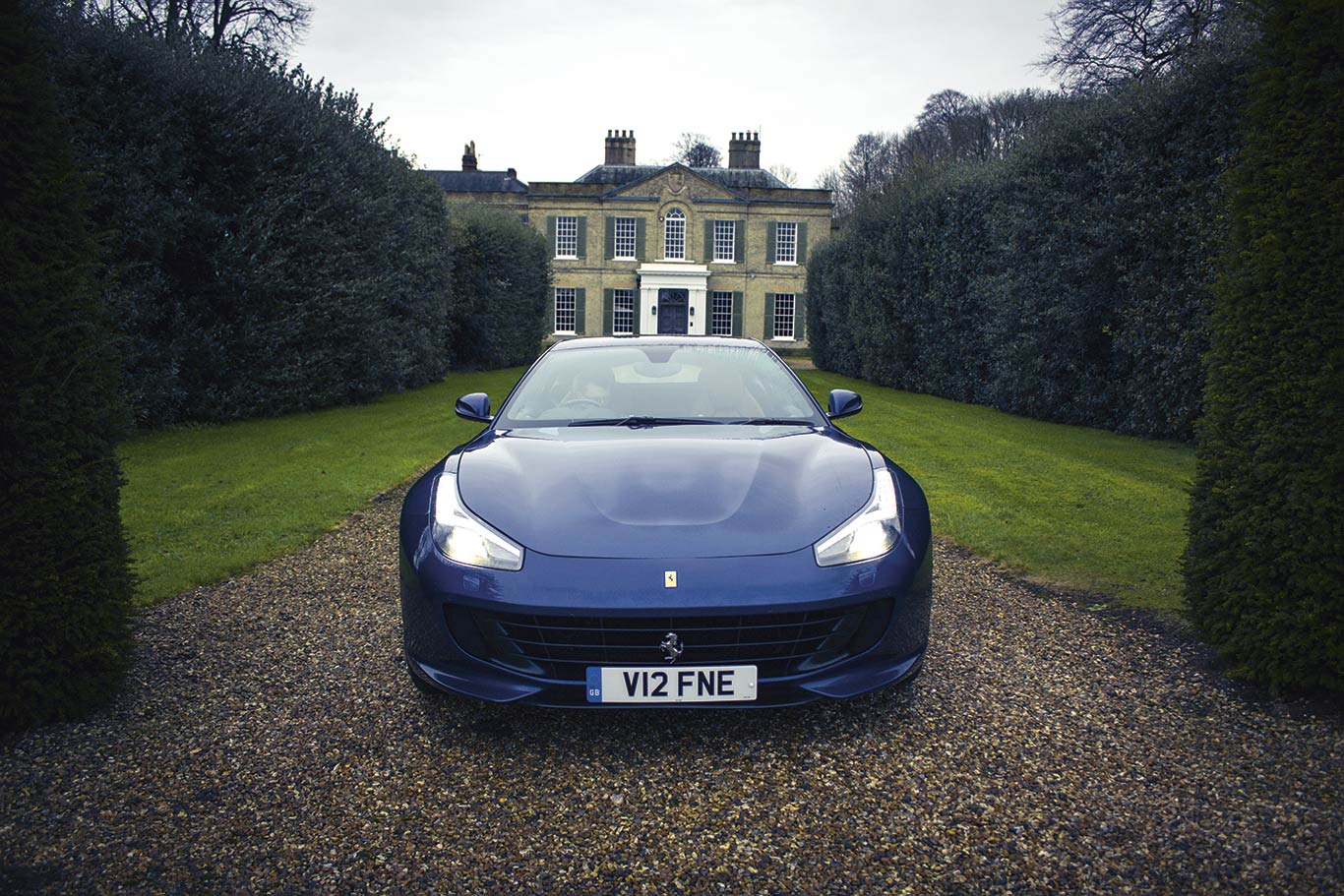 Despite its elegant lines and low stance, the GTC4 might even be called rugged. Kit Harrington rugged though, not quite the full-blown Tom Hardy. And barring the good-but-not-glorious FF it is really the only Ferrari you should consider driving during the winter months. It has a clever all-wheel drive system, all-wheel steering and an adjustable front splitter height that won’t leave you palpitating at the sight of speedbumps. Add into this mix five settings ranging from Ice to Race and you get a driving experience that is planted on the wettest of roads, while retaining the exhilaration you’d expect from a Ferrari. In fact, the Lusso is so sure-footed thanks to its nifty four-wheel drive wizardry, I even dared to flirt with Race mode on a dry day and not head sideways into a hedgerow.

As well as being rugged it’s damn practical, too. It has four proper seats (I tested this by squeezing in my 6’3” 19 stone brother behind me), a generous amount of boot space coupled with fold down rear seats, and it isn’t so loud that you’ll wake the entire village when you start it at six am in the morning.

Ferrari’s new found sensible side isn’t just reserved for exterior, oh no. The generously sized split-screen infotainment screen is plainly intuitive, and their sat nav system has been updated for a more user-friendly experience. In addition, the multiple screens can be chopped and changed to give you the combination and layout that you desire, all via a dial on the back of the steering wheel. This means you don’t have to keep glancing over at the 10” screen while you’re busy overtaking the Kias and Peugeots in your way on the Sunday morning drive. All very safe then. 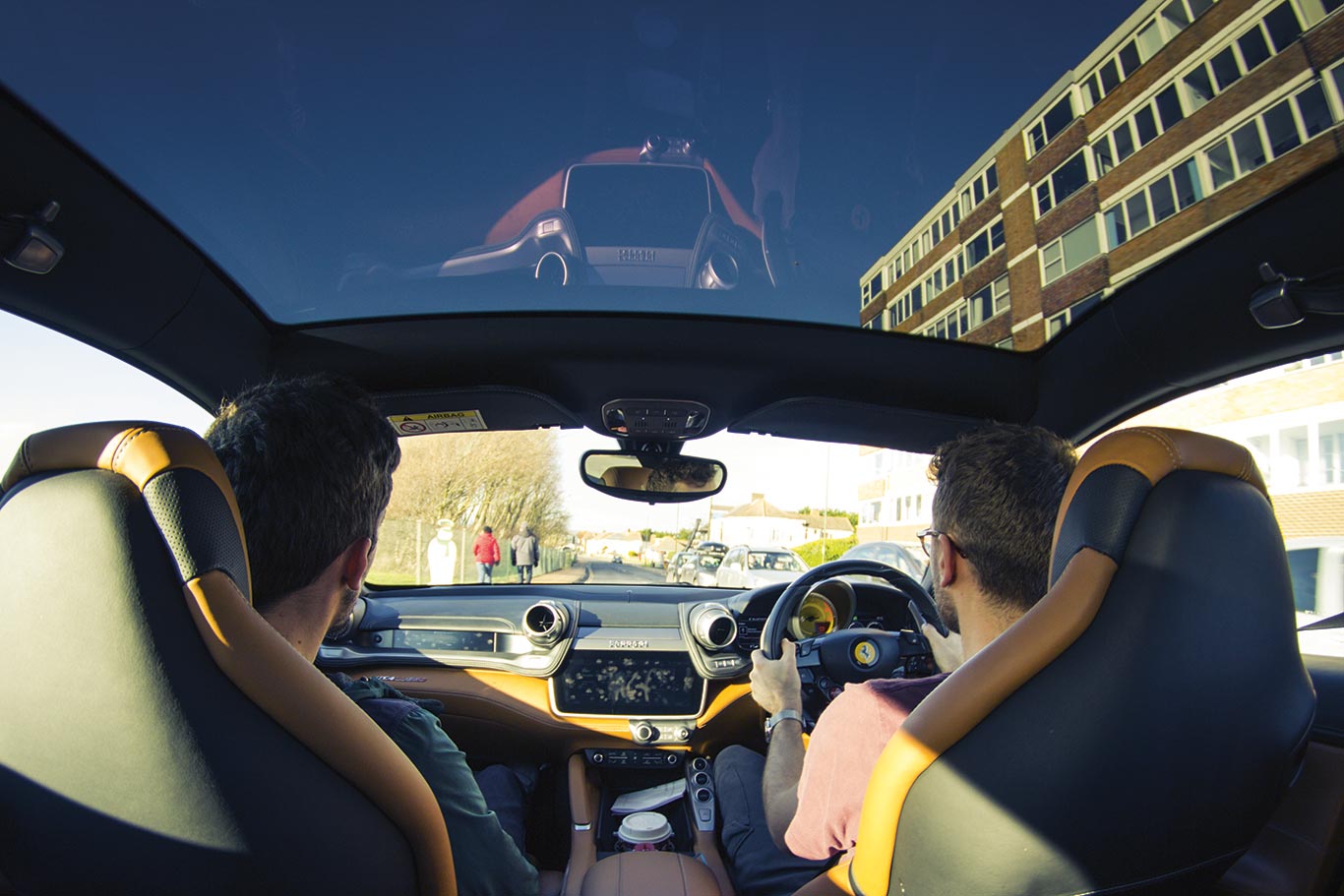 The glass roof is a real head-turner, not to mention the sound of the V12 as it wails all the way up to 8250 rpm.

As far as places to be go, the Lusso easily makes my top 10, alongside the Italian Alps and a country pub on a Saturday afternoon. The smell the tan leather gives off is intoxicating, and the view from behind the steering wheel is about as close as you can hope to get to feeling like the latest F1 recruit. Just sitting in the driving seat is enough to turn a bad day into a good one.

The fun’s not just reserved for the driver however. To open the space up for the rear passengers Ferrari give you the option of a glass roof which gives the car a distinctly Grand Designs feel. There are also USB chargers for each passenger, something essential for children or teenagers, and the front passenger even gets their own screen with the ability to change the music, set waypoints on the sat nav or just stare at the rev-counter like my geeky car friends did.

Thrashing the Lusso around the South Downs I came to realise why I would choose the V12 over the V8 every day of the week. The sound is a heady affair; however it can feel a little restrained due to the very well soundproofed cabin. The only thing to do then, even on a cold day, is wind down the windows, drop down a couple of gears and just listen to the V12 soundtrack as it wails up to 8250 rpm. 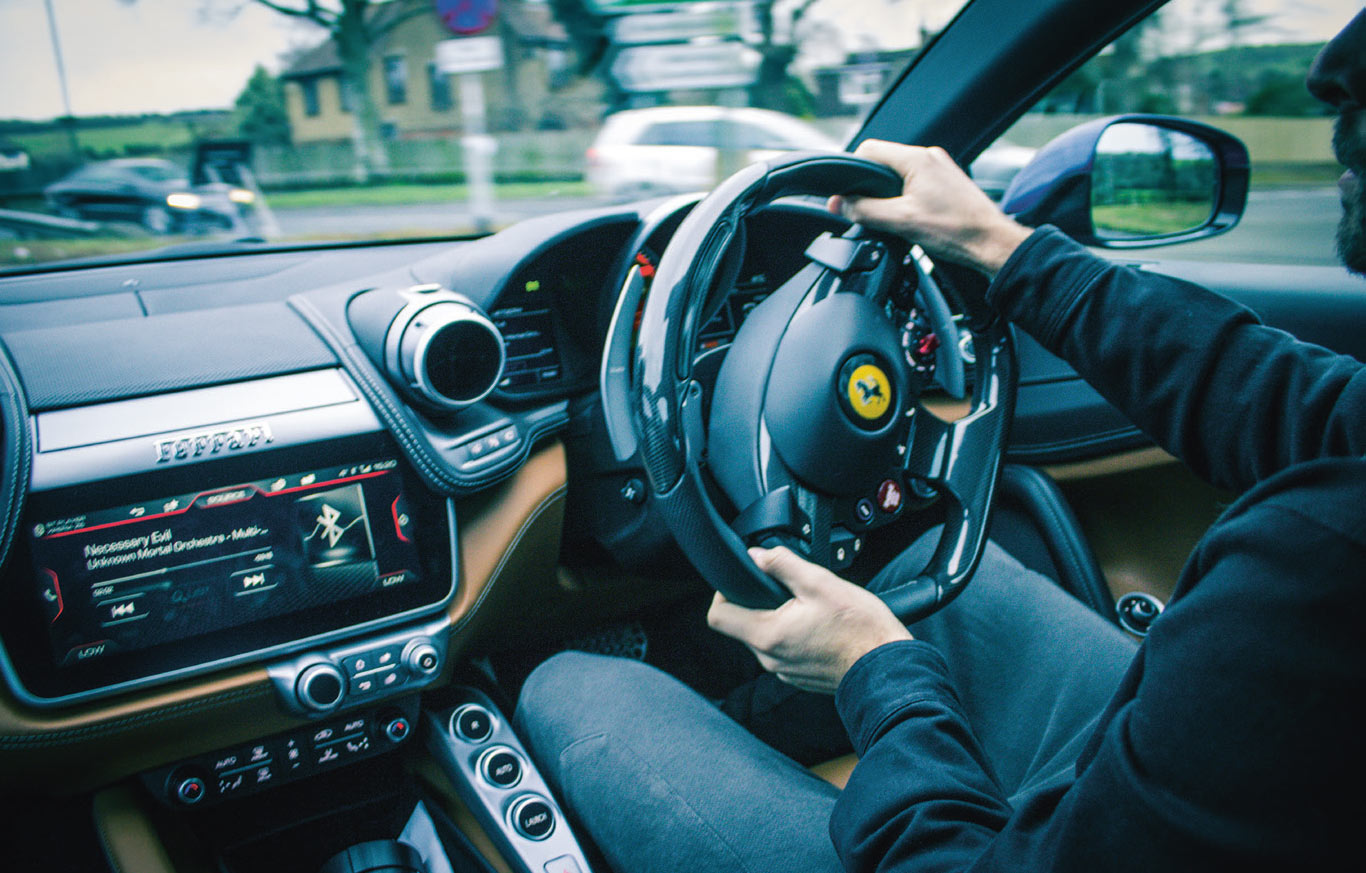 Around the lanes of Sussex the Lusso feels surprisingly nimble for such a long-bonneted car, managing to devour the corners and as efficiently as a car half its size. This dynamism can be attributed to the rear wheel steering and four wheel drive working in tandem (4RM-S for short), giving you the impression of the car being more accurate and refined in the corners. In a straight line the performance is impressive for a car you can ferry your family around in. The V12 produces 681 BHP and will launch you from 0-62mph in 3.4 seconds and all the way up to a terrifying 214 mph. It really is in modern supercar territory. 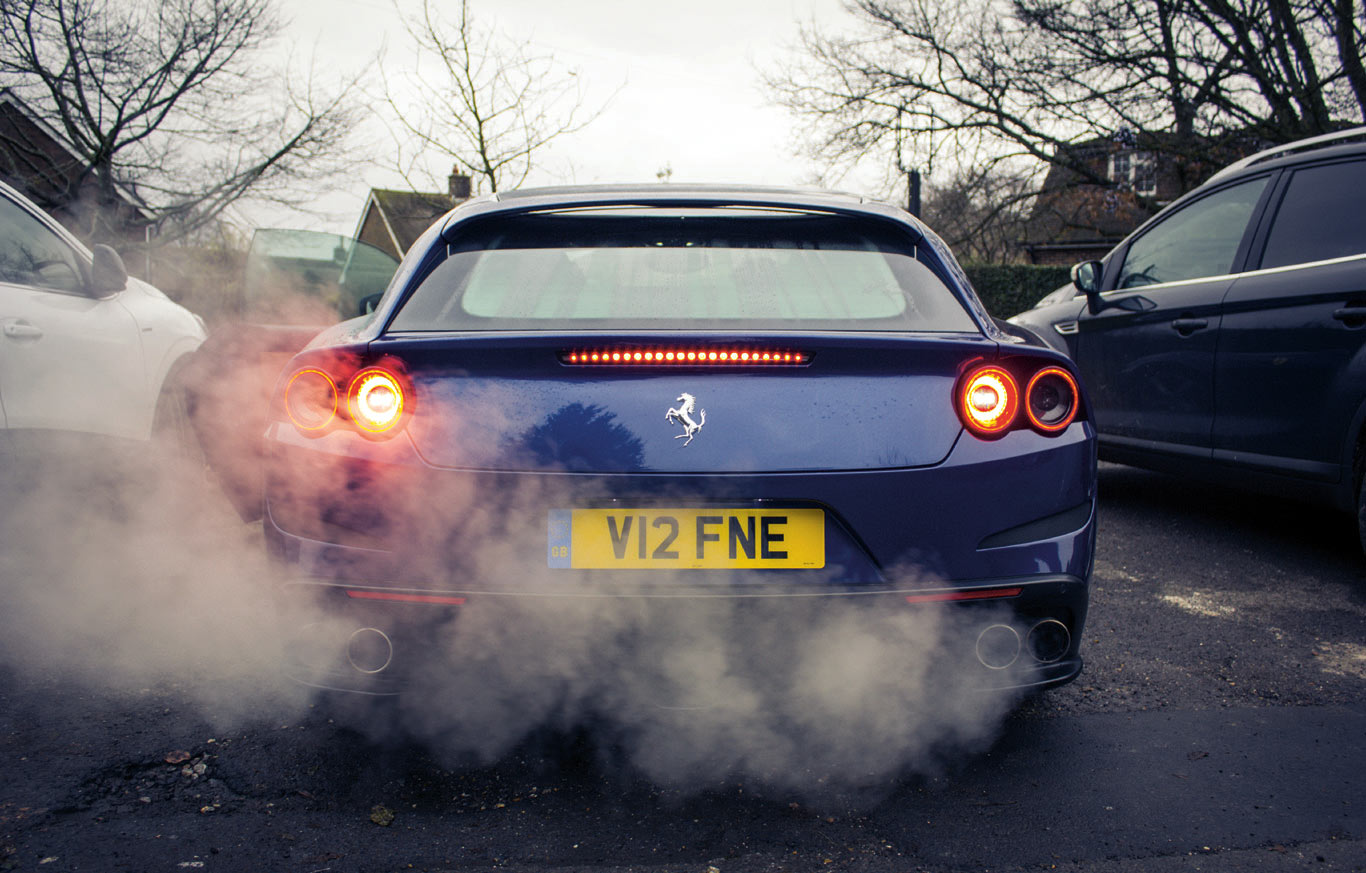 The Lusso also continues to transcend the Supercar/Grand Tourer boundary with its ride and comfort levels. It pains me to tell you that I was actually driving around for two days unaware that an additional comfort setting existed. That’s how comfortable the ride is. Once I did find the button (which is slap bang on the steering wheel) I turned it on to discover the comfort levels are seriously on par with some performance focus saloons. The Lusso is a fairly large car, measuring nearly five meters in length and roughly two metres wide, meaning you wouldn’t exactly call it a city car – but that’s fine. It’s a Grand Tourer. It’s designed to get you across countries quickly, not cities. Despite all this, when stuck in traffic it is incredibly easy to drive and the parking sensors and rear camera make it a cinch to park. 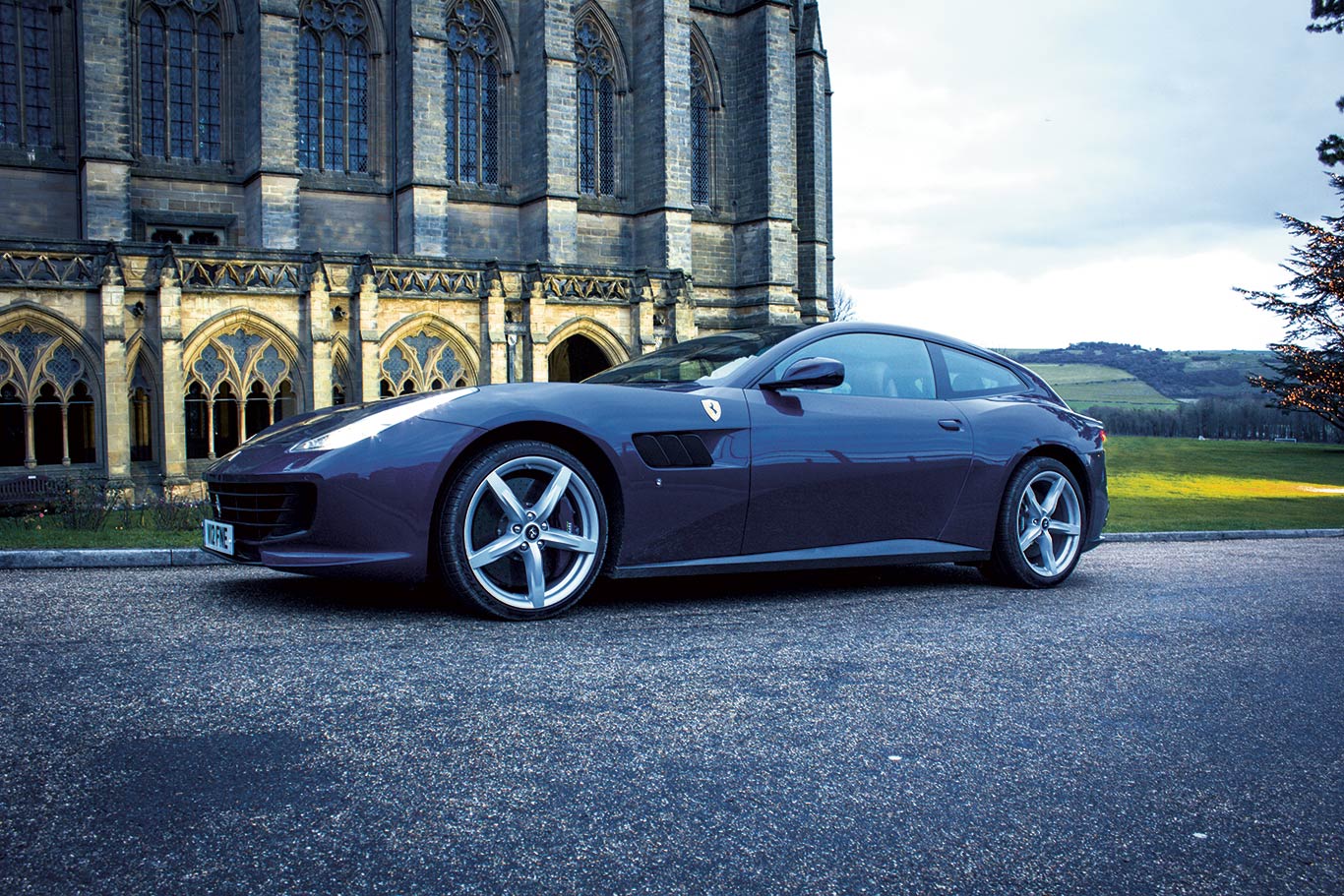 Shooting brakes are generally connoisseurs’ choice. This means that the GTC4 can be divisive. Personally, I think it is perhaps the best looking ‘bread-van’ ever built. And although the aesthetics haven’t changed that dramatically from the FF it manages to somehow look like a completely new car. Granted, the bonnet is very long and can look a little odd from the wrong angle, but the way the rear arches flair and flow onto the circular brake lights is sublime. Pair that with the most outrageous rear splitter on a road car I’ve ever seen and you’ve got a car with an enviable booty. You certainly won’t mind getting overtaken by this one.

All round, the Lusso is an incredibly impressive piece of engineering. Of course it can’t be a jack of all trades and there are a few niggles: the driving experience could be a little more connected and the optional extras are of course very expensive. Apart from those very small things, there is nothing negative I can really say about it. I’m going to put it out there and say it’s the best all-round car I’ve ever driven. It has all the practicality of a saloon, subtle good looks and the performance of a monster. It’s so easy to drive and so effortlessly cool I can’t think of any other way I would rather travel. More at: ferrari.com