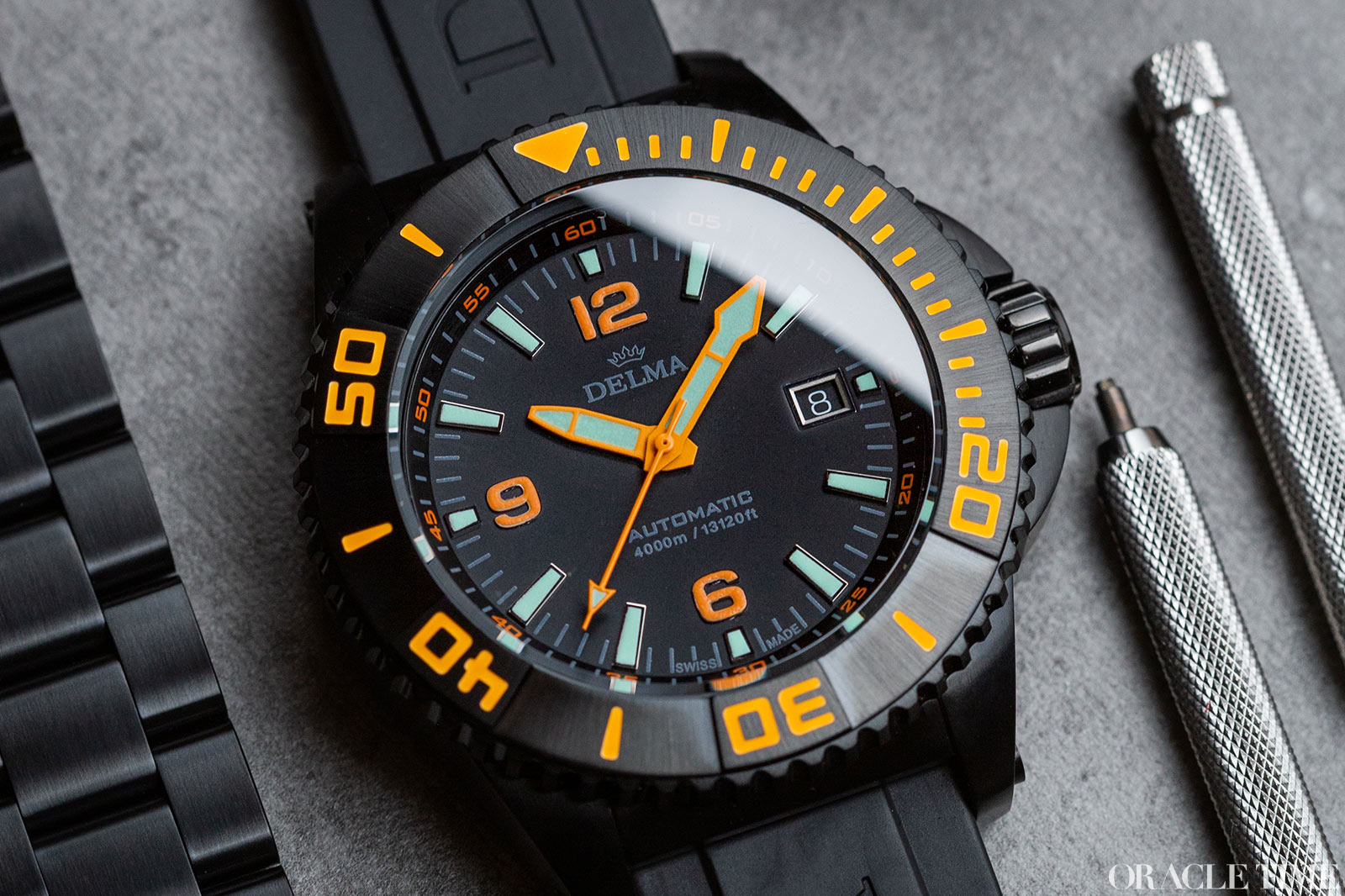 Sometimes a dive watch is just too good at its job. Now, I’m not saying the rigours of the depths aren’t demanding; the thought of the crushing ocean floor keeps me up at night. It’s just that past the 300m mark it all becomes a bit academic. Past the 1,000m mark it becomes downright ludicrous.

What does that mean then for the Delma Shark III? The Swiss brand has endeavoured to show up pretty much every other diver on the market with their over-the-top monster of the depths, and the 4,000m water resistance is just the start. That’s 4km straight down – at least in terms of pressure.

But where for some watches that kind of number would be just another part of the specs sheet, the Shark III seems to revel in that gloriously unnecessary water resistance, upscaling the dimensions of the watch into the kind of timepiece that should by rights be an extra in The Meg. 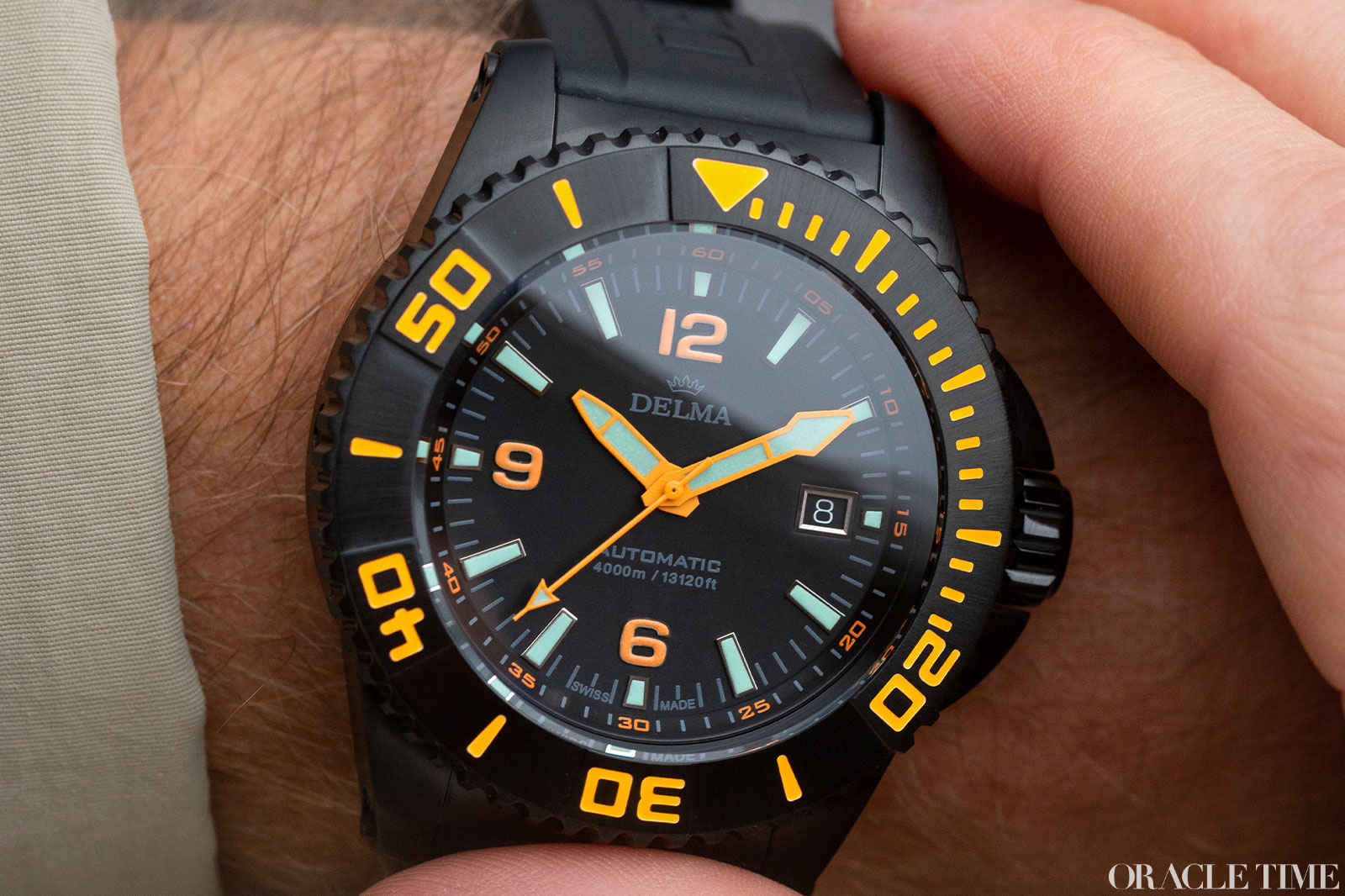 Those dimensions come in at 47mm across, which does indeed make for a serious chunk of metal on the wrist. Strangely though, watches of this size seem to work no matter your wrist. They’re so intense they’re not meant to suit anyone in the understated, elegant kind of way and I genuinely find it a hell of a lot of fun to strut about with. That’s doubly true of the Black Edition. You could never call the blacked-out version of the Shark III stealthy, for obvious reasons, but the DLC hammers home just how excessively macho the thing is. It’s fantastic, especially paired with chunky clothing and an IDGAF air. 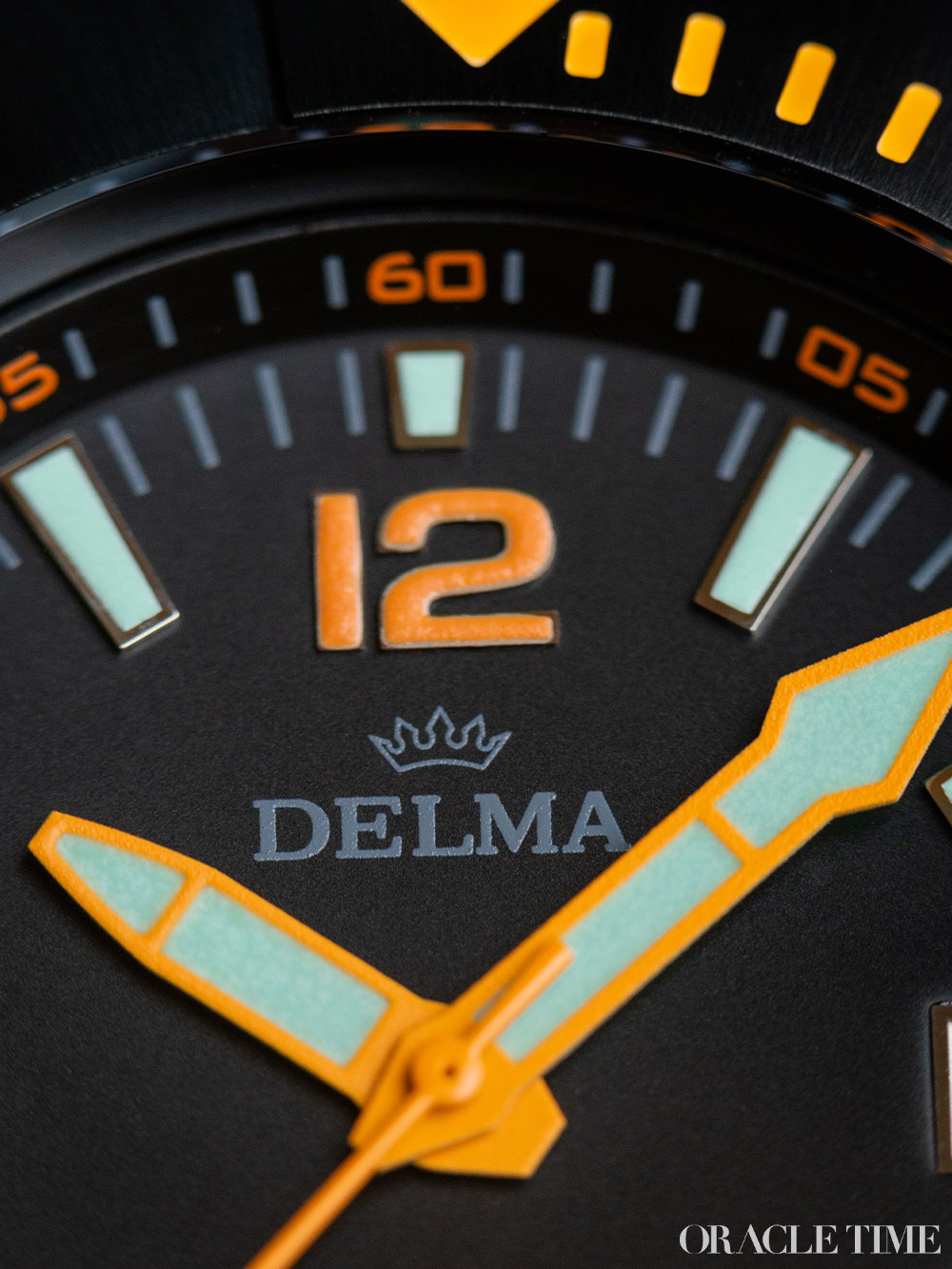 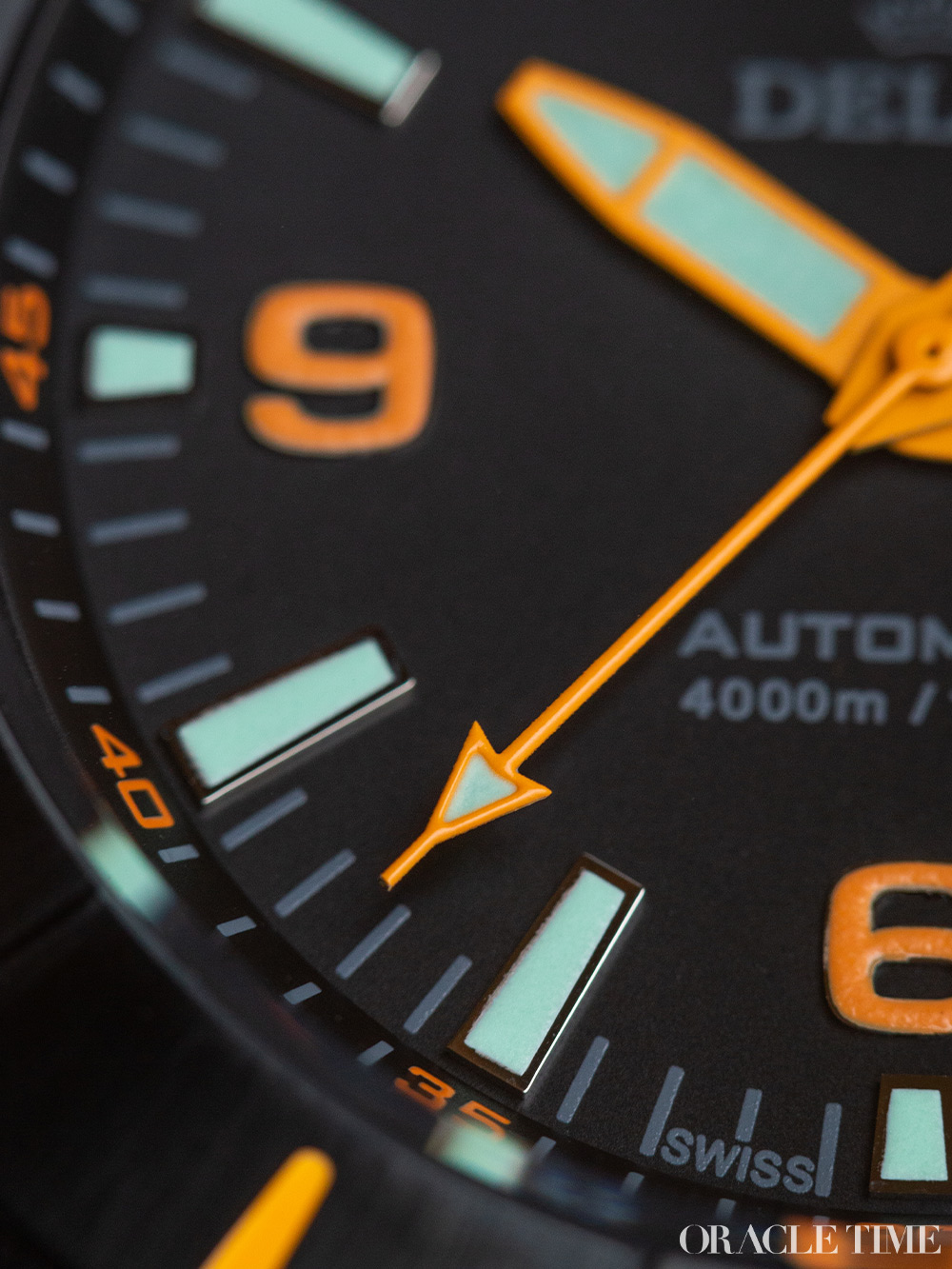 The highlights, which I originally thought would be more at the yellow end of the rainbow are a lot more orange that I expected. It’s an eye-catching, high contrast look that would be necessary for a black diving watch to stand out at depth, with the key numerals – six, nine and 12, picked out in large numerals, with an equally chunky diving scale on the unidirectional bezel.

I have a thing for chunky, satisfying diving bezels and the Shark III doesn’t disappoint. I’d almost like a bit more resistance in keeping with the watch’s size, but that might make it a touch harder to actually use. 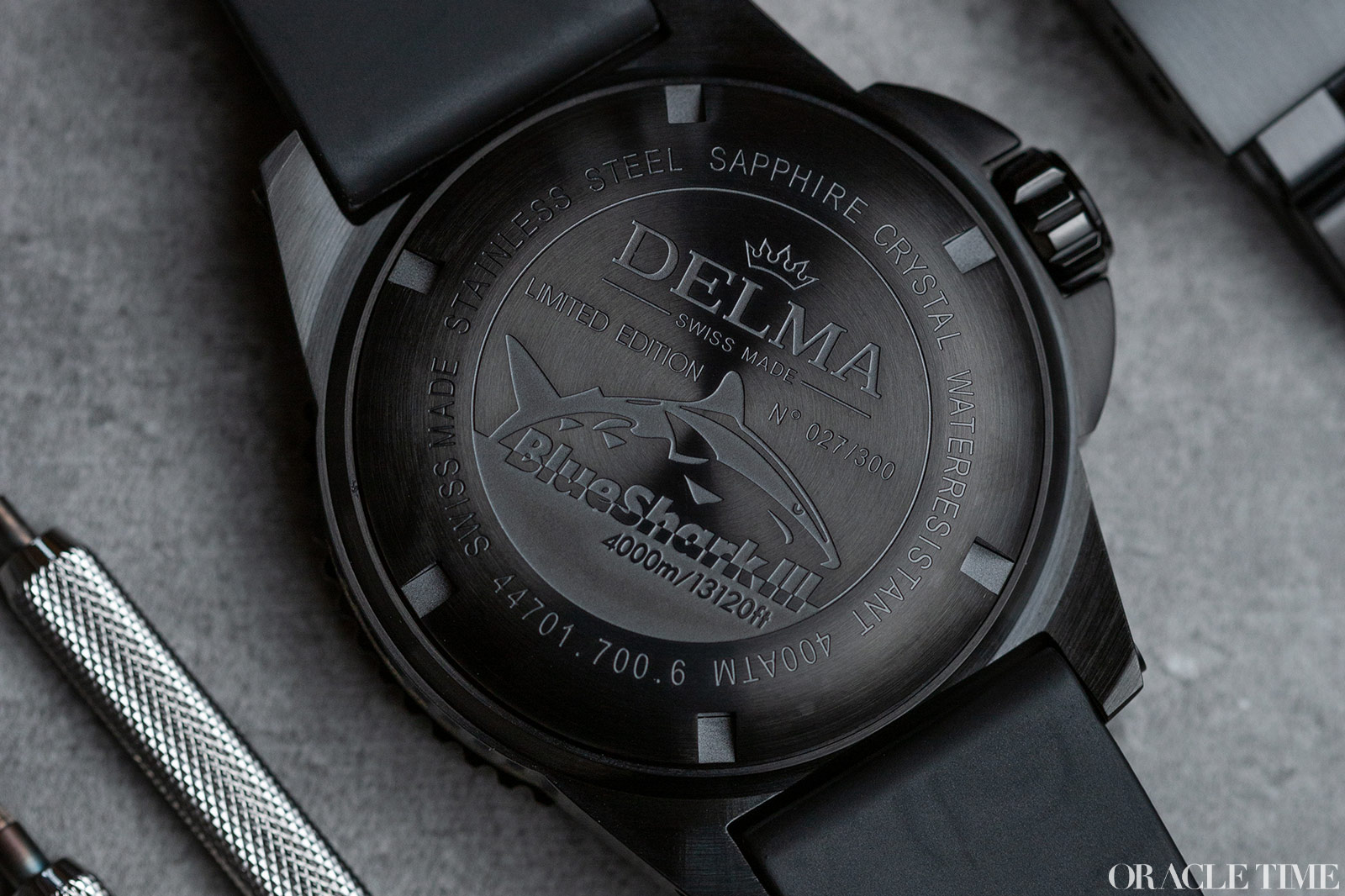 While the outer watch is pretty damn extraordinary, the movement inside is nothing to write home about. You’ll have come across the Sellita SW200 before – we all have, many, many times – and the workhorse calibre is solid. It also has a handsome Delma rotor, though it’s not going to set the world alight.

That’s not a complaint though. Delma has built a reputation on accessibility and even with depth resistance equal to that of a Rolex Sea-Dweller, the Blue Shark III Black Edition comes in at £2,250. That’s less than a quarter of the Watch with the Crown. Sure, it’s nowhere near the same level of prestige or calibre quality, but it’s an interesting little nugget of information, nonetheless.

And hey, when it comes to sheer weight of metal, that’s a lot of watch for the money. With icy blue motifs the new Prospex ‘Antarctic Ice’ 1968 Diver’s Re-Creation is set to join the... The latest from Russian watchmaker Raketa is a three-way collaboration with both British retailer...