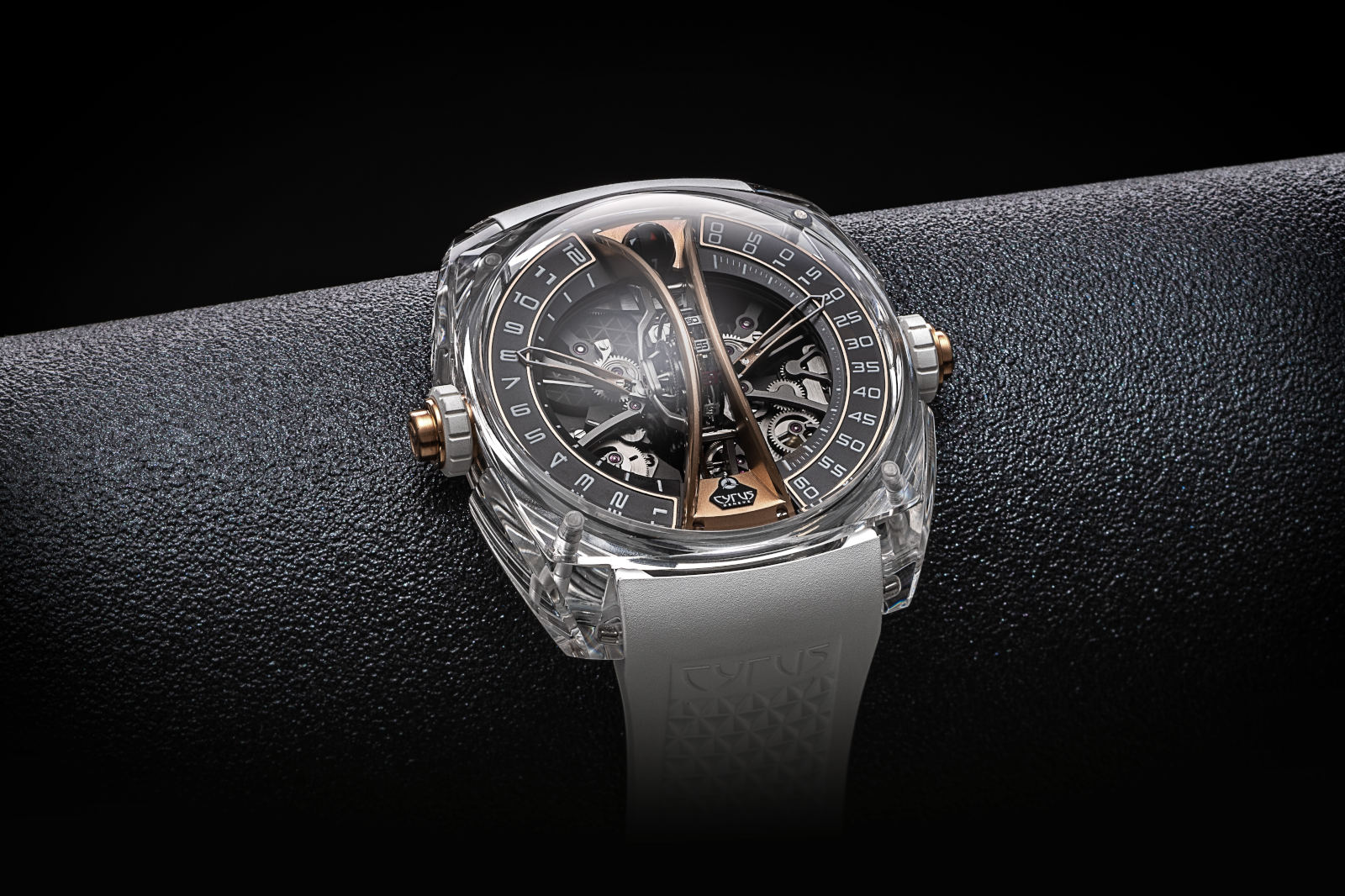 If you’re familiar with the brand, you’ll know that Cyrus creates some of the most visually recognisable uber-high-end watches going. Strong, albeit niche, design codes mean you can spot them a mile off, and the same goes for the new Klepcys Vertical Skeleton Tourbillon Sapphire.

Jean-François Mojon, the master watchmaker behind the double retrograde vertical tourbillon movement inside the new release, has collaborated on numerous projects creating high-end mechanical movements for independent brands such as HYT, Harry Winston, Hermes, MB&F and more. So it does the beating heart of this watch justice that Cyrus have given it a sapphire case to really show off this master watchmaker’s prowess in full view. Plus it adds another weapon to their arsenal. 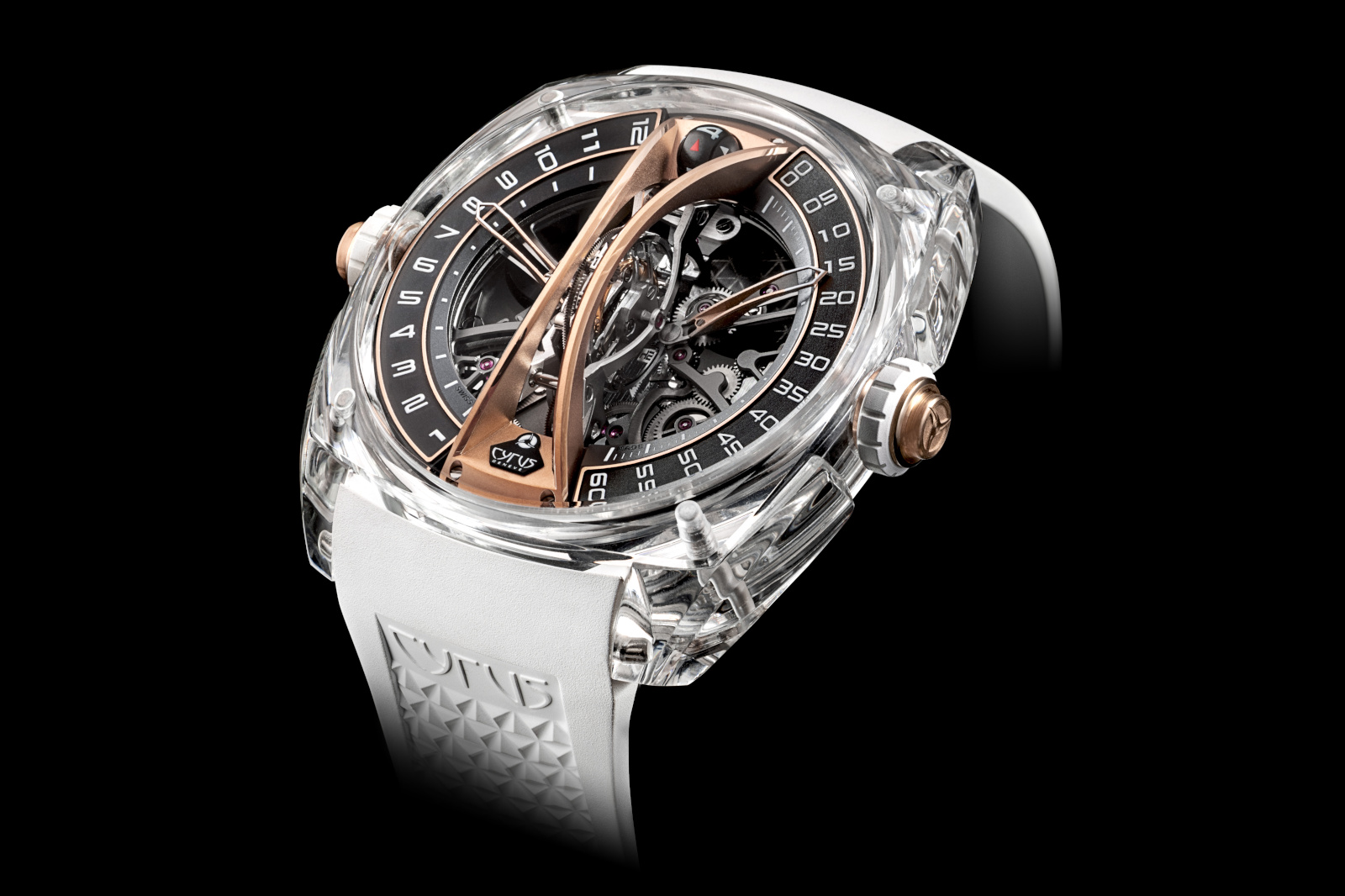 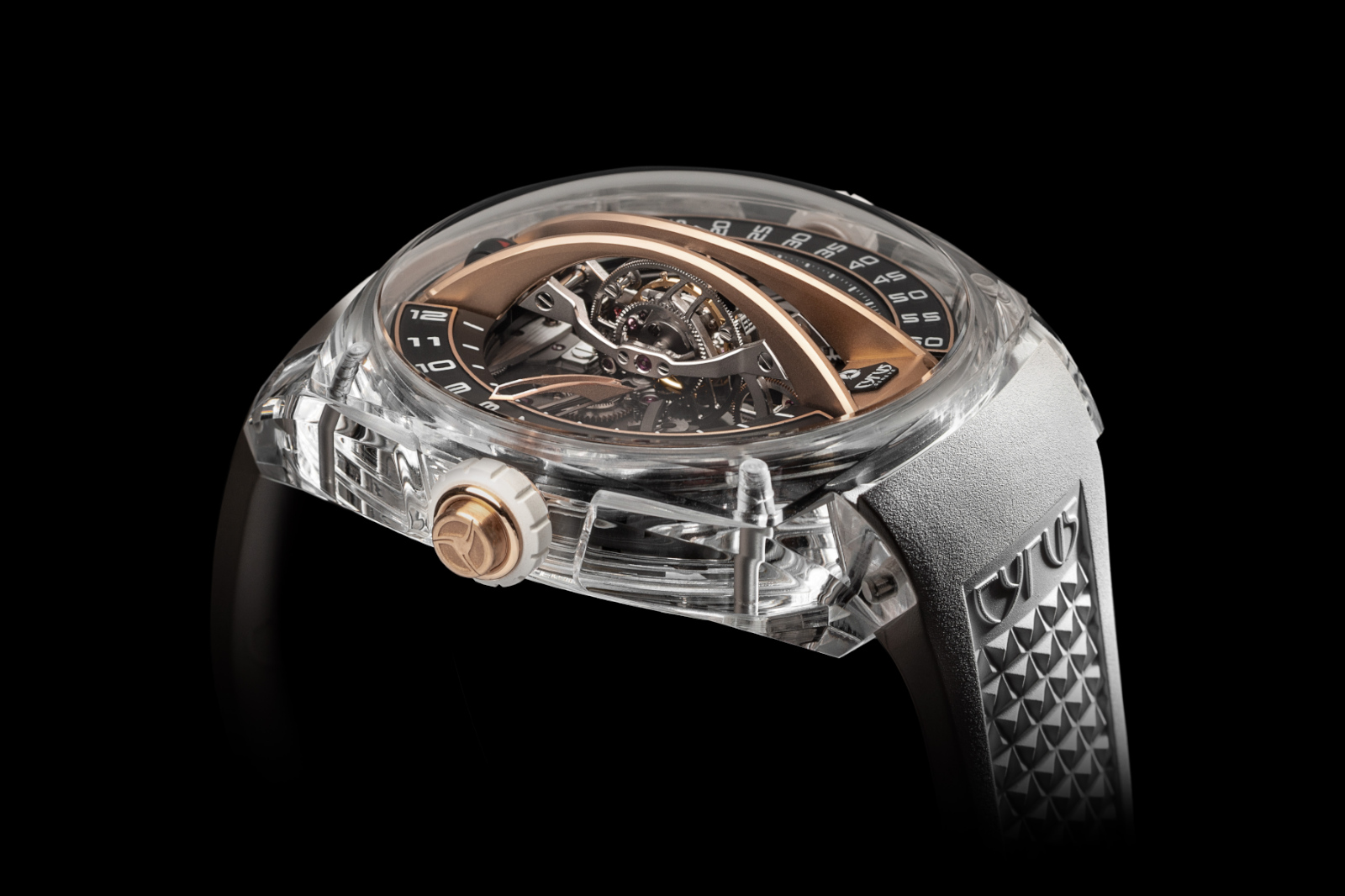 Speaking of the new case, it has a 44mm diameter, excluding the dual crowns, and is constructed from 29 parts. And of course, it’s made of clear sapphire crystal that allows you to see the skeleton movement from all angles. The use of the high tech material has meant some facets of the cushion case have been redesigned but the impact on the overall shape is minimal.

However, that doesn’t stop the impact of the change on the style of the piece being immense. The clear case gives it a high-tech, futuristic look that wouldn’t be out of place in a sci-fi film. Certainly one of the most exciting watches that Cyrus have recently. And that’s helped by the fact that the display itself is pretty crazy. 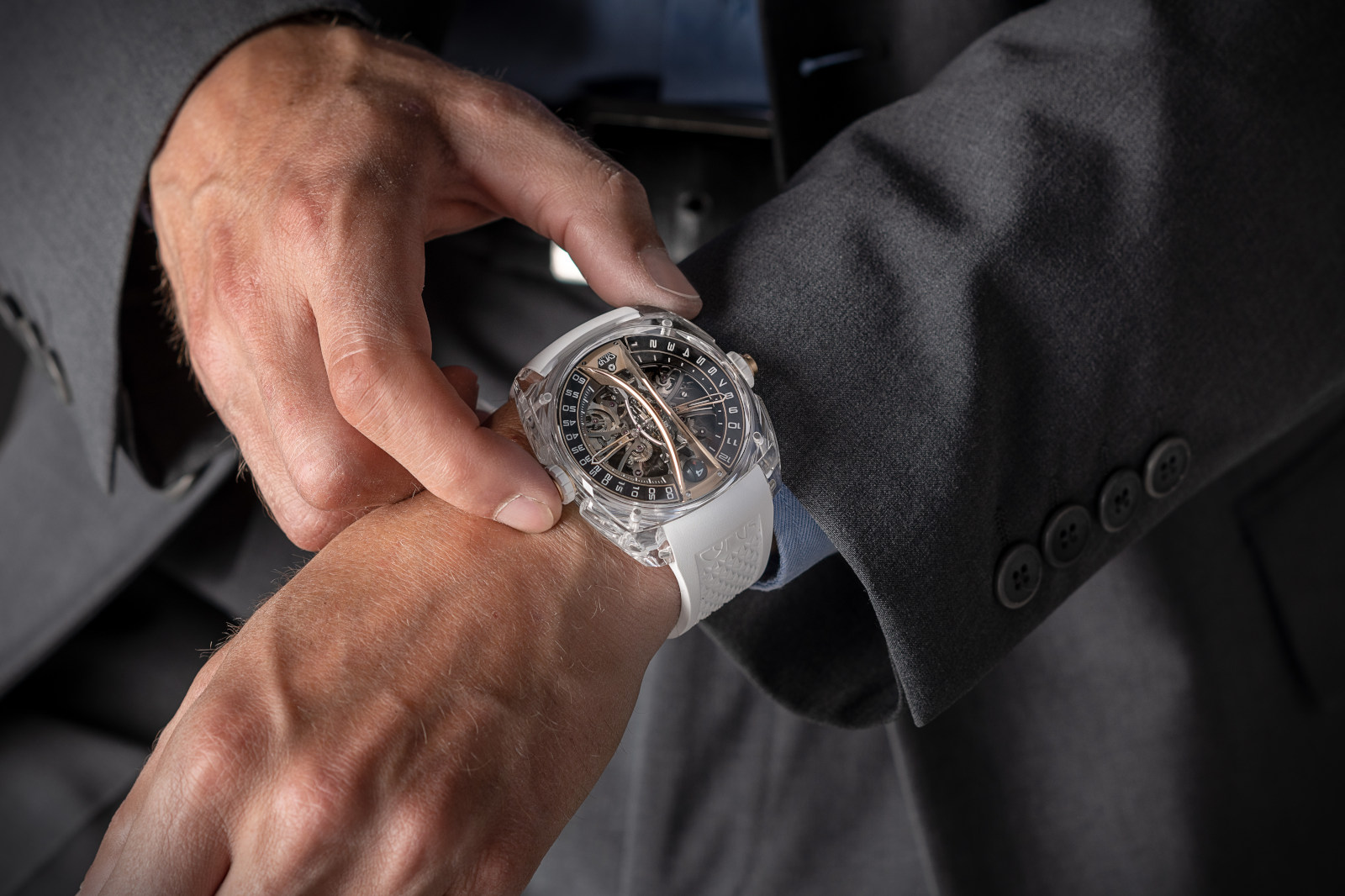 At its core, the Klepcys Vertical Skeleton Tourbillon Sapphire is a double retrograde timepiece with hours on the left and minutes on the right. Through the centre is an 18k gold bridge with a date window at the top and the Cyrus logo at the bottom. Beneath the bridge is the titular vertical tourbillon, which has been shifted 90 degrees off the traditional horizontal axis.

The movement itself is the in-house calibre CYR625, which has an amazing 100-hour power reserve despite its complexity. It’s a real beauty, one of Jean-François Mojon’s masterpieces, finished exquisitely and it definitely deserves being appreciated from every angle, as the new case enables. 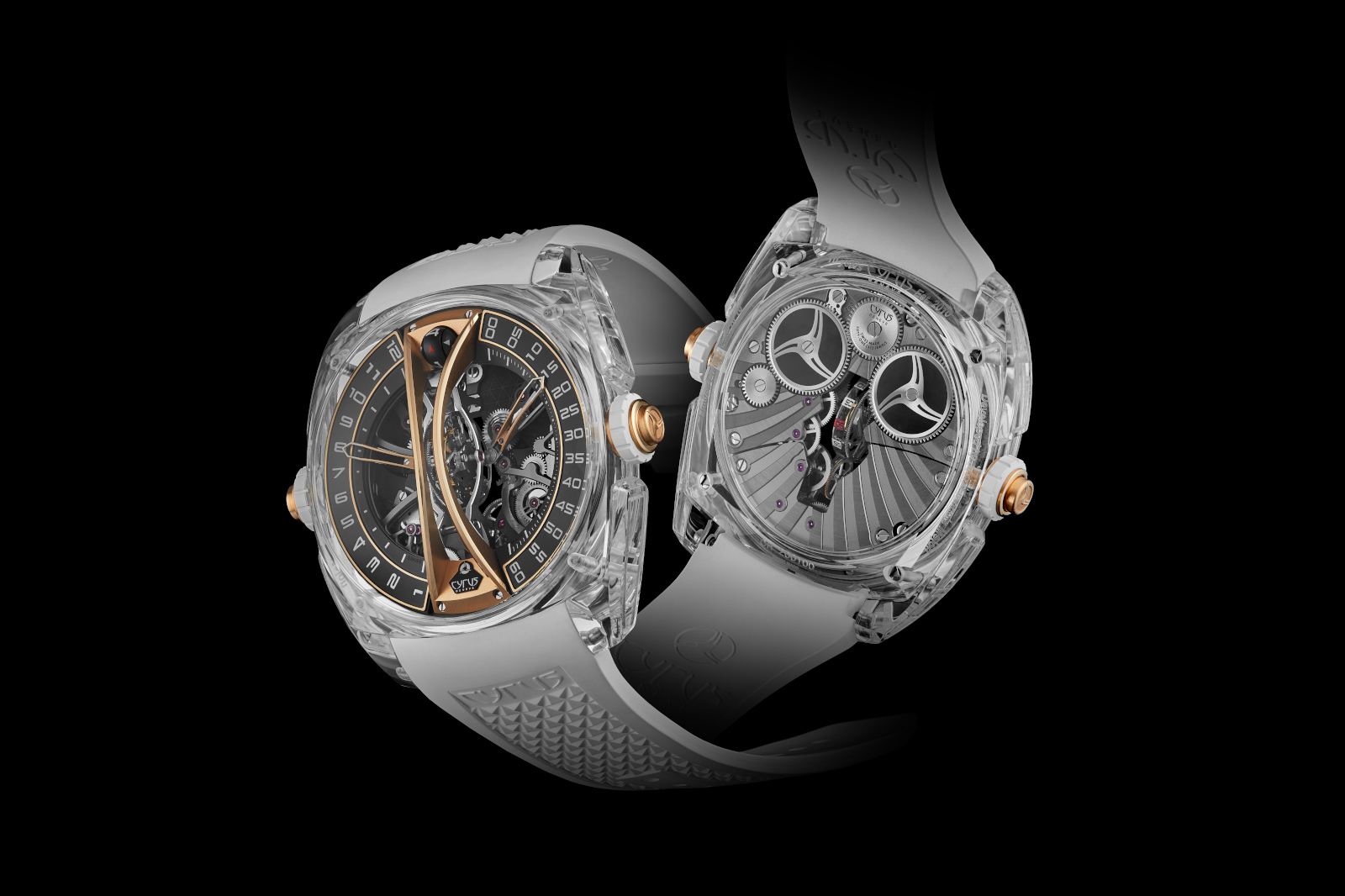 Lastly, because of the reflective properties of the case which gives it a ghostly white tint, the Klepcys Vertical Skeleton Tourbillon Sapphire comes on a matching white rubber strap. Plus, it really puts the limited in limited edition with just 10 pieces being made. It encapsulates the ambitions of the brand and is the perfect watch to celebrate their anniversary with.