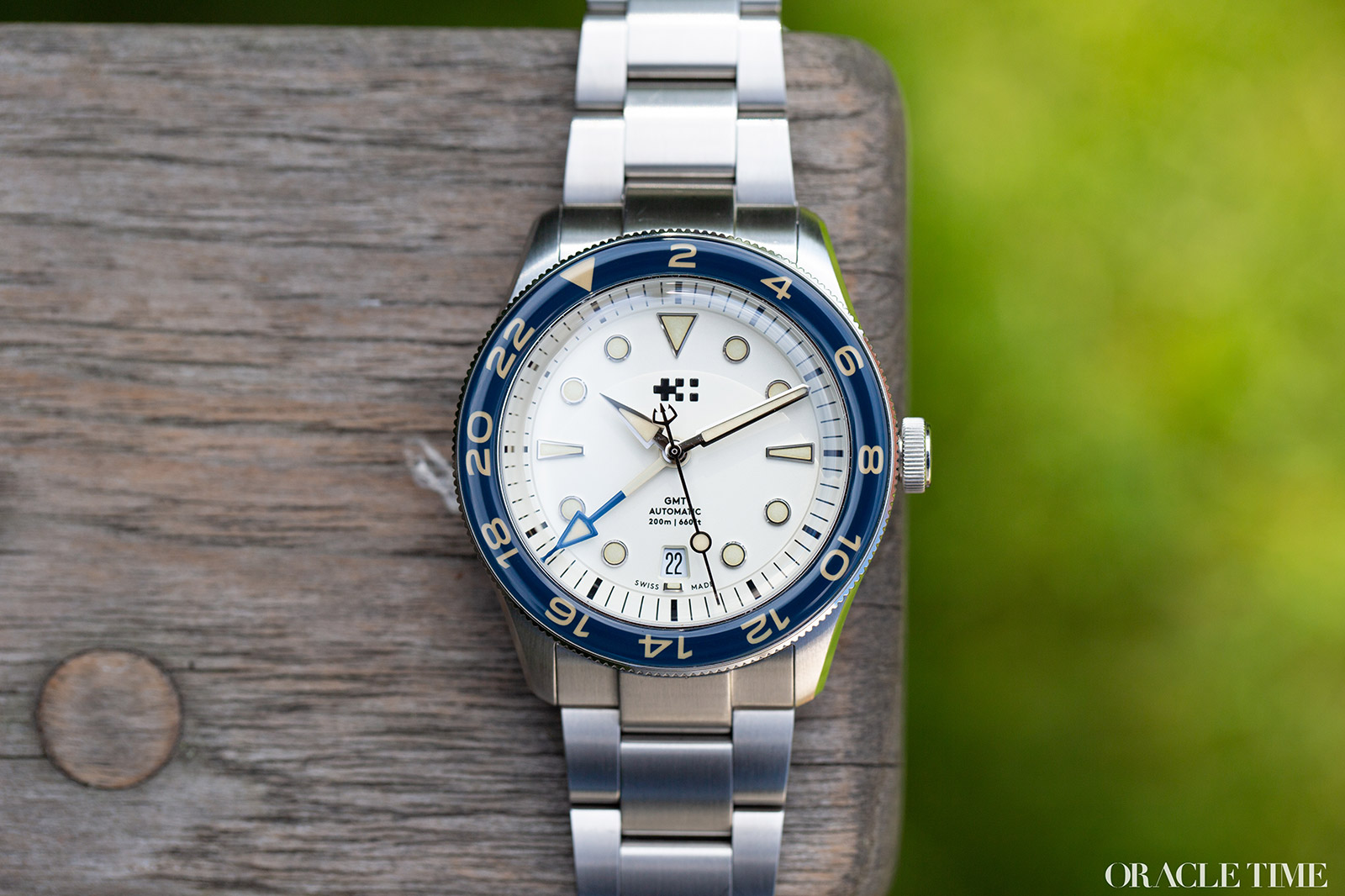 Of all Christopher Ward’s watches – and there are a lot of them these days – my personal favourite’s always been the C65. A more retro take on the rugged, tool watch credentials of the C60, it’s always been more colourful, fun and more casually wearable. The only slight issue is that it was perhaps a little too close to the C60. Apparently, I’m not the only one that thought that, as it’s an admittedly minor issue that the British watch brand has opted to solve with the C65 Aquitaine GMT.

Aquitaine, in case you don’t know your European regional geography, is a coastal region of France. More importantly, it’s where the inimitable Jacques Cousteau called home. That reference to an icon of 50s diving is no accident either; the inspirations – or should that be one inspiration in particular – are obvious. 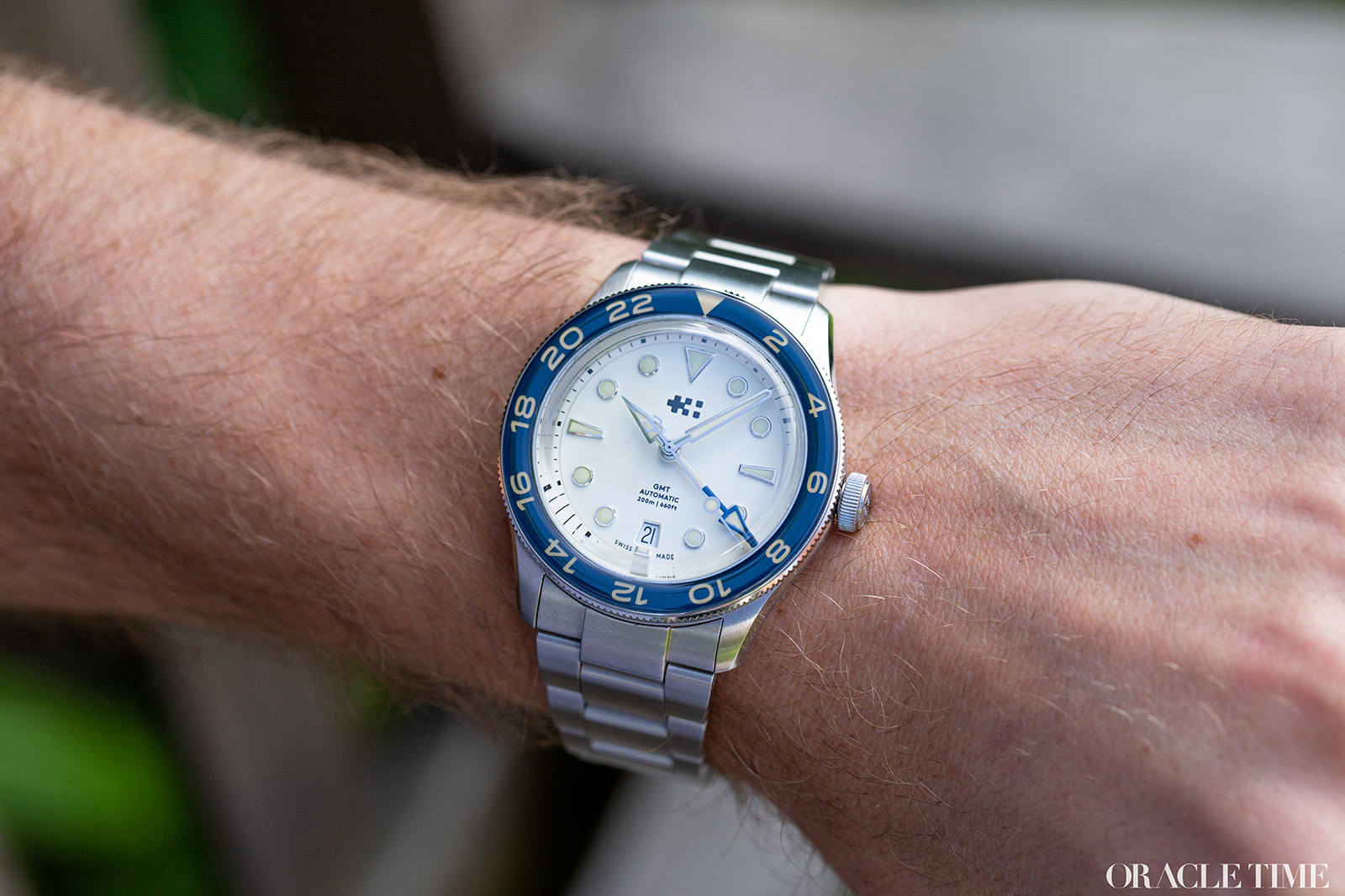 The newest aspect of the C65 Aquitaine GMT is its bezel. Rather than the usual aluminium insert, Christopher Ward has opted for a Fifty Fathoms-esque sapphire version. While it’s not quite as clean and clear as Blancpain’s version, it’s still a gorgeous bezel and, given sapphire’s credentials, ultra-hard and practical.

The rest of the watch is pretty par for the course for the C65, with a few tweaks across the board. The date has been moved to 6 o’clock from 3 o’clock which helps with balancing the dial (though I’d prefer entirely without, personally) and the logo on the dial has been changed to CW’s twin flag. They’re small changes but appreciated ones. 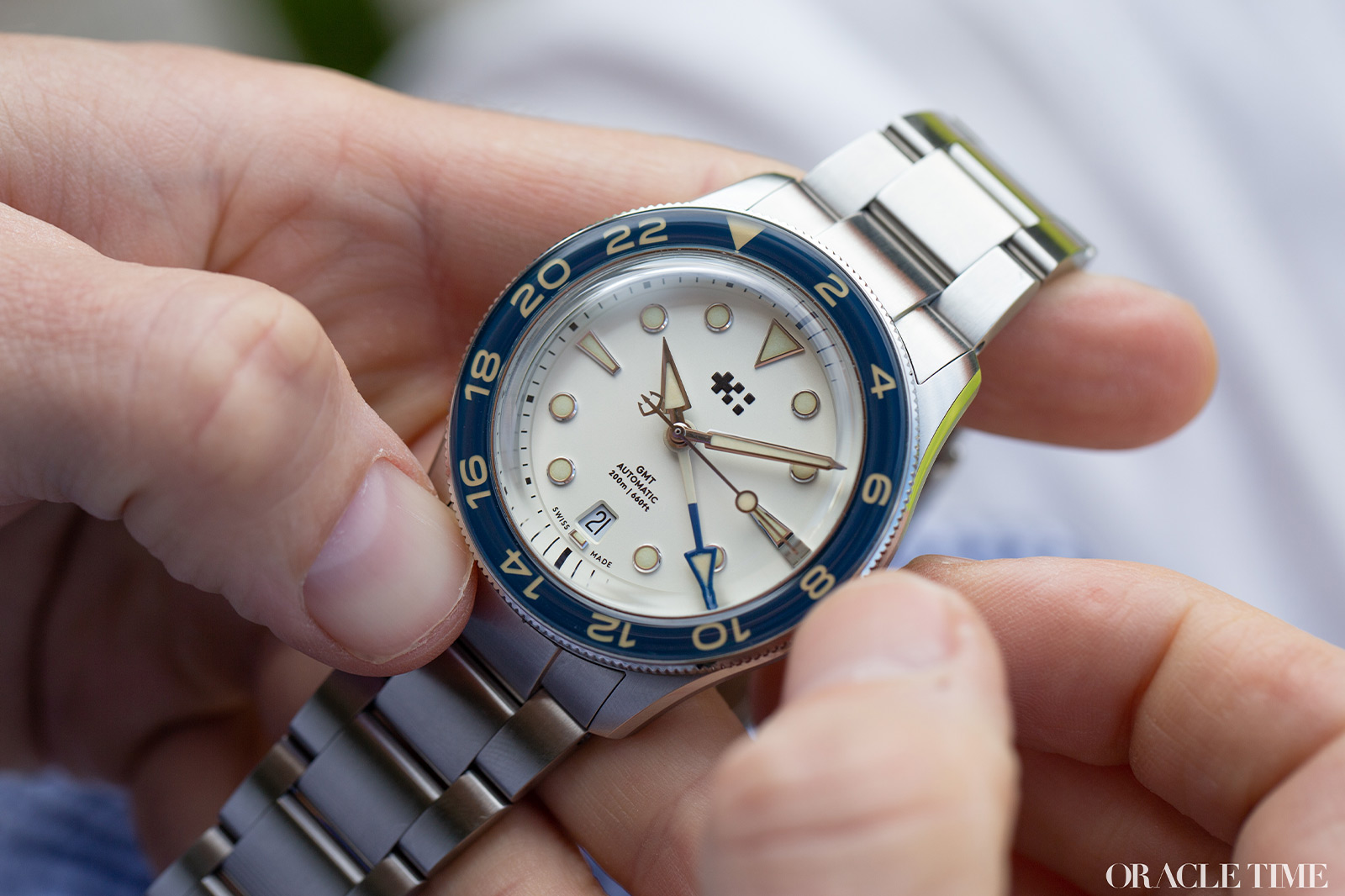 I’d have liked it even more pared-back if possible to match the elegant take on diving that made the Fifty Fathoms famous, but I doubt if even Christopher Ward wanted to step on those well-heeled toes. As it is, the C65 Aquitaine GMT makes a good halfway house between proper tool watch and elegant yacht club showpiece.

More importantly though, despite the addition of a sapphire caseback, the water resistance has been upped from 150m to 200m. It was always a little low to previous C65s and that extra 50m makes a big difference. It’s not the professional standard 300m still, but that’s left for the more tool-oriented pieces in the collection, so it’s there if you need it. 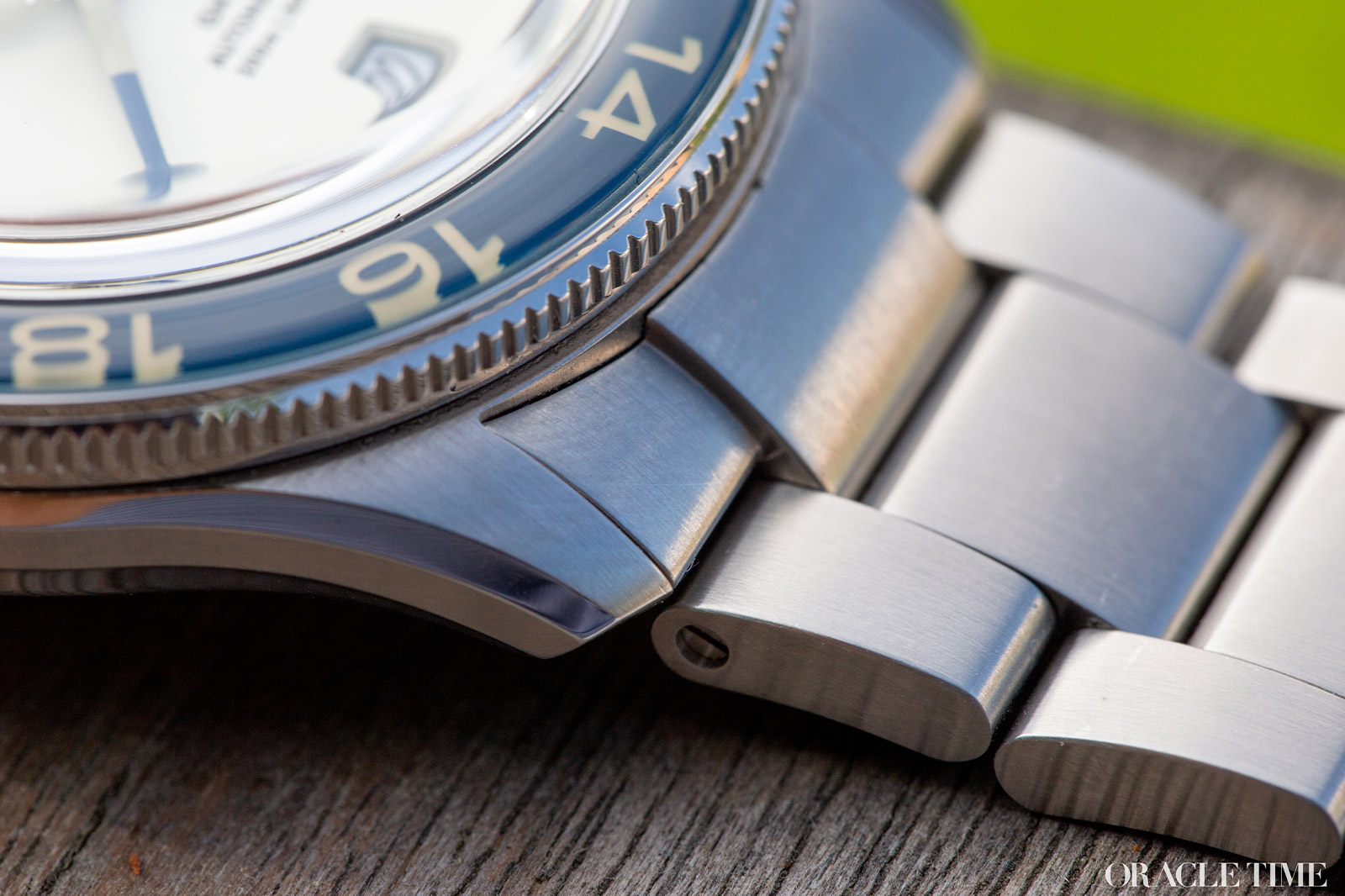 The angular, light-catcher case is in full force, a nicely polished 41mm of stainless steel. The lugs though have been shortened slightly, which makes it feel a touch smaller on the wrist. Given it’s meant to be a retro throwback, it’s a nice touch, but more importantly makes it sit fantastically on the wrist.

The colourway here is interesting. It’s not stark white or even beige but a sandy, in-between colour. Paired with the nautical blue dial, it’s the best looking of the Aquitaine’s variations. Yes, the green is great, but the contrast here makes it. 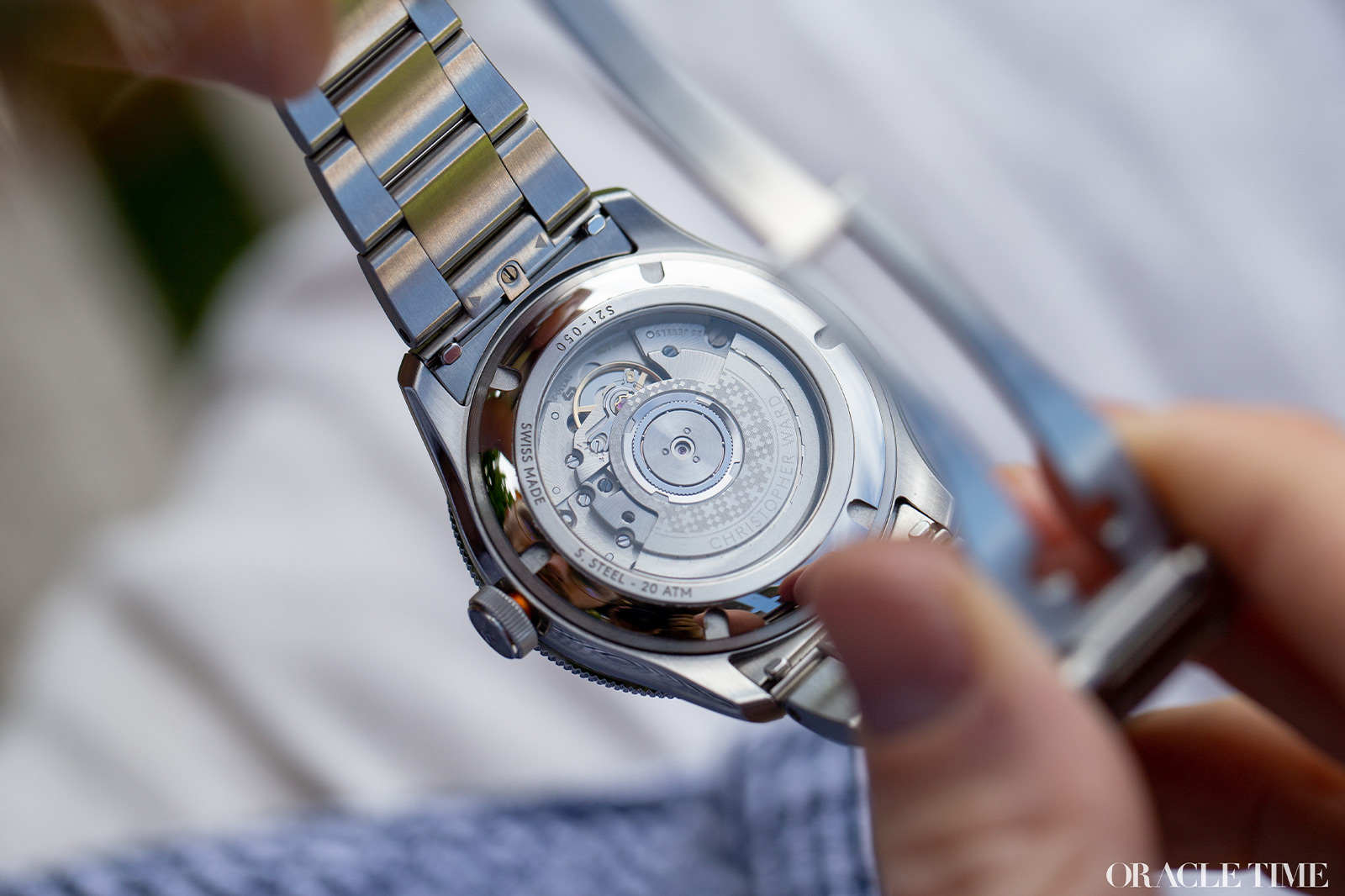 The movement inside is a GMT-equipped Sellita SW 330-2, a solid workhorse a couple rungs down from Christopher Ward’s own in-house calibres. It’s fine, the usual kind of movement you’ll find in many a micro and accessible brand. And while Christopher Ward is by no means micro, it is accessible.

Christopher Ward has plenty showier pieces in their collection, some with far greater value from a horological and finishing standpoint. But honestly, if I were going to buy one myself (and I’m considering it) it would be the C65 Aquitaine GMT.