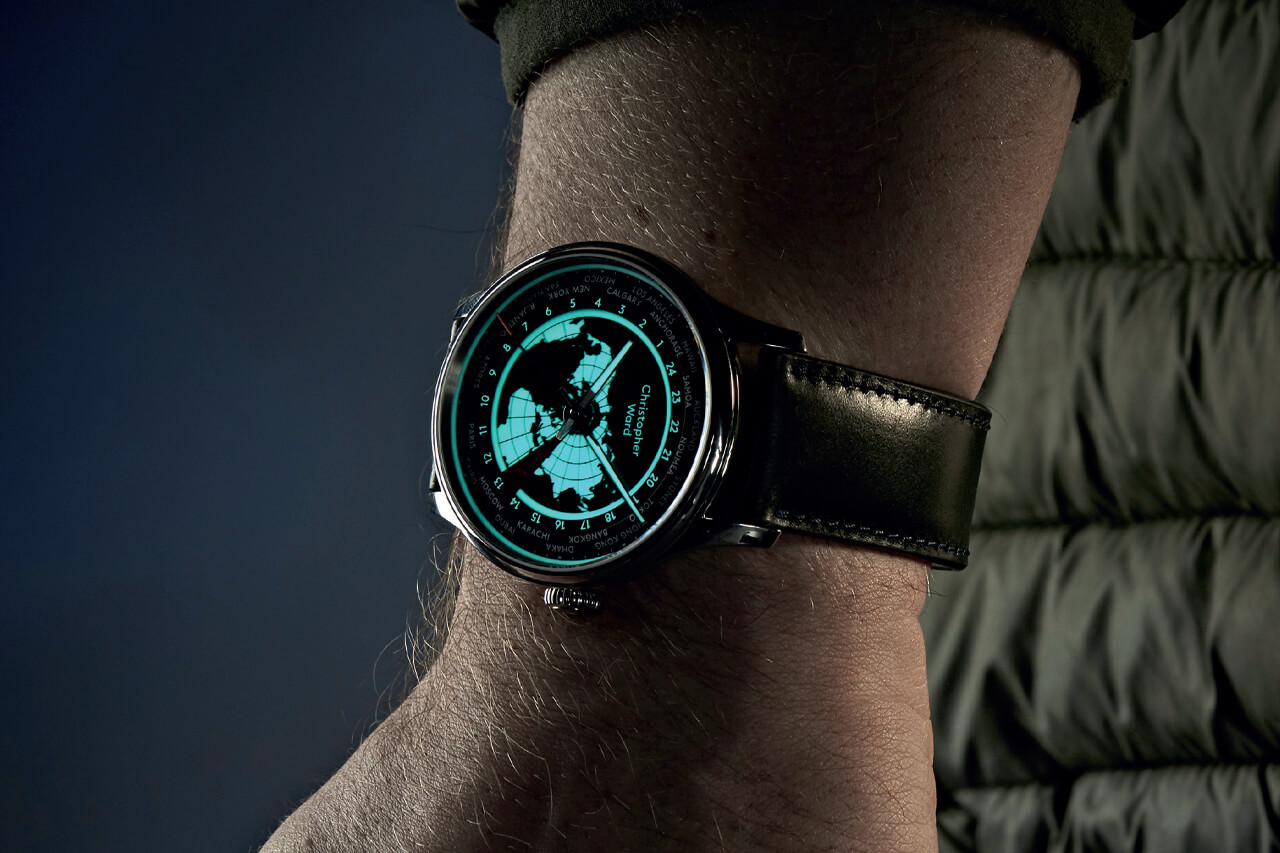 The global pandemic has hit everything pretty hard, watchmaking included. Sure, there are the occasional reports to retailer stockholders that sales are still good, but from a creative side many a brand has slowed over the past few months. Not Christopher Ward.

The accessible British watch brand has been releasing insane numbers of pieces, bolstering established collections, beginning new ones and taking an almost scattershot approach to design with serious, performance pieces alongside funky oddities. Even more impressive is that they’ve generally been nailing it.

“It’s all about what we like to call – internally at least – playful seriousness”, explains CEO Mike France. “On the one hand, we make watches we can be proud of, with solid movements and the whole thing. On the other, we feel like we can have fun with it.”

Christopher Ward aren’t the only ones having a bit more fun these days of course; the resurgence in designs from the 60s and 70s has led to watchmakers coming out of their shells a little. After all, it’s hard to look back at some of the quirky, funky archived designs of those golden years and not want to try it out for yourselves.

Still, for Christopher Ward, the timing on their more playful approach to design is more the timeline of the brand rather than any re-issue zeitgeist. “We never felt like we could have that kind of fun before,” explains Mike. “We needed to establish ourselves… and now that we’ve done that – at least, I reckon we have – we can actually do things that aren’t as serious.” 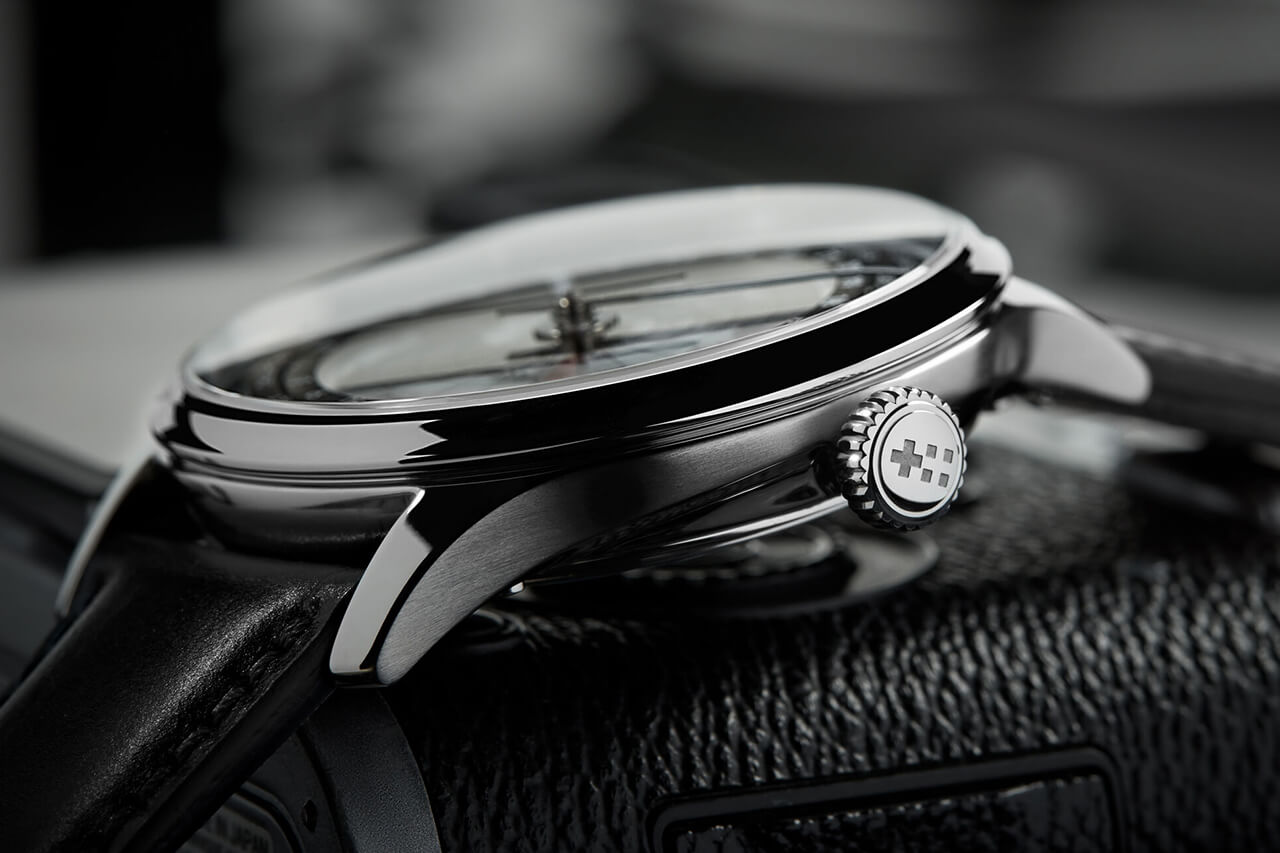 Out of their recent glut of watches – and given their ever-expanding slate a glut it is – my favourite’s been the C65 Chronograph, which ties in nicely with what Mike’s saying. The slim bezel and retro layout would look decent as they are, but throw in all the colours of a regatta rainbow and you have an eye-catching watch I genuinely adored my review time with. 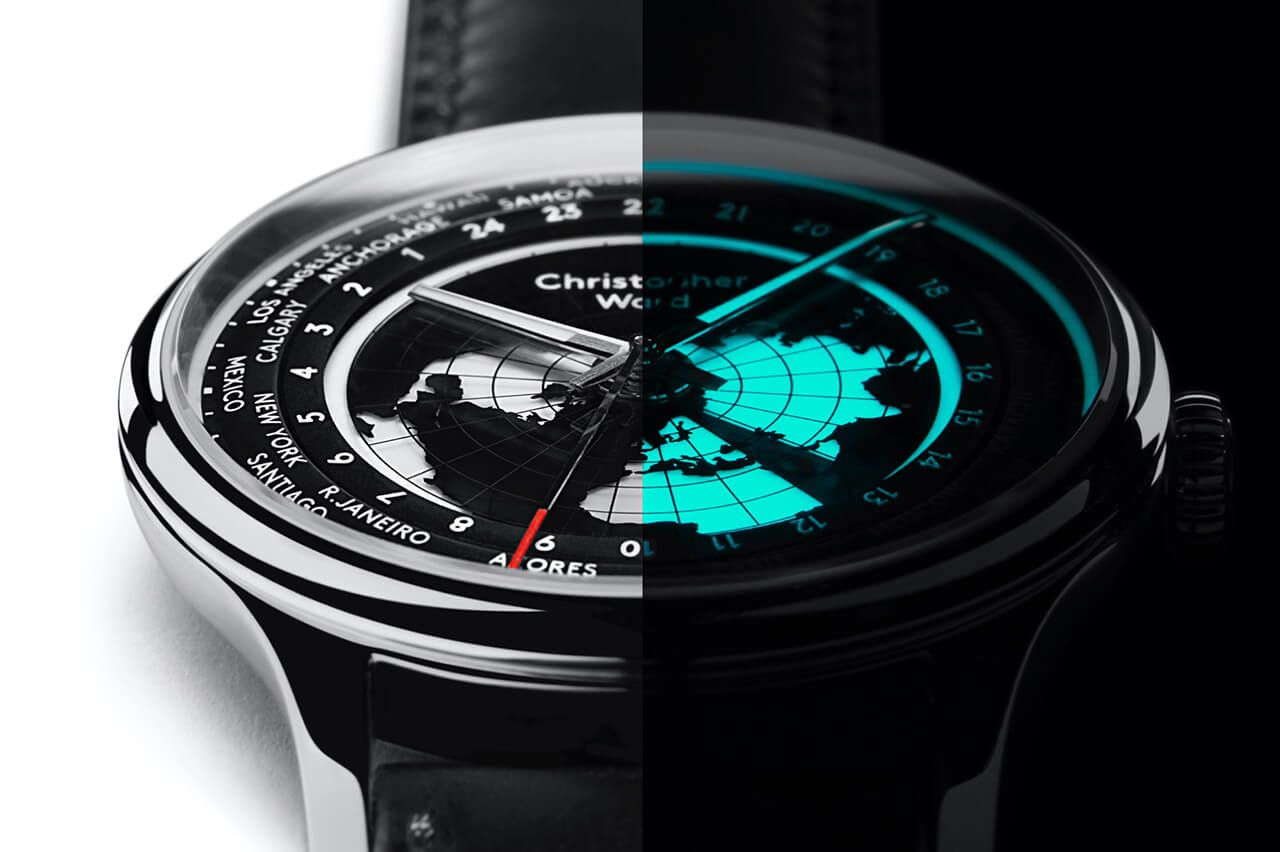 That said, it’s not just colours though and Christopher Ward seem to have found themselves a little horological niche to fill: lume dress watches. “We’ve pioneered both the use of sapphire and ultra-lume in dress watches”, Mike explains, “creating our own category of watches. It’s bigger and bolder than any other dress watches out there not covered in diamonds!” 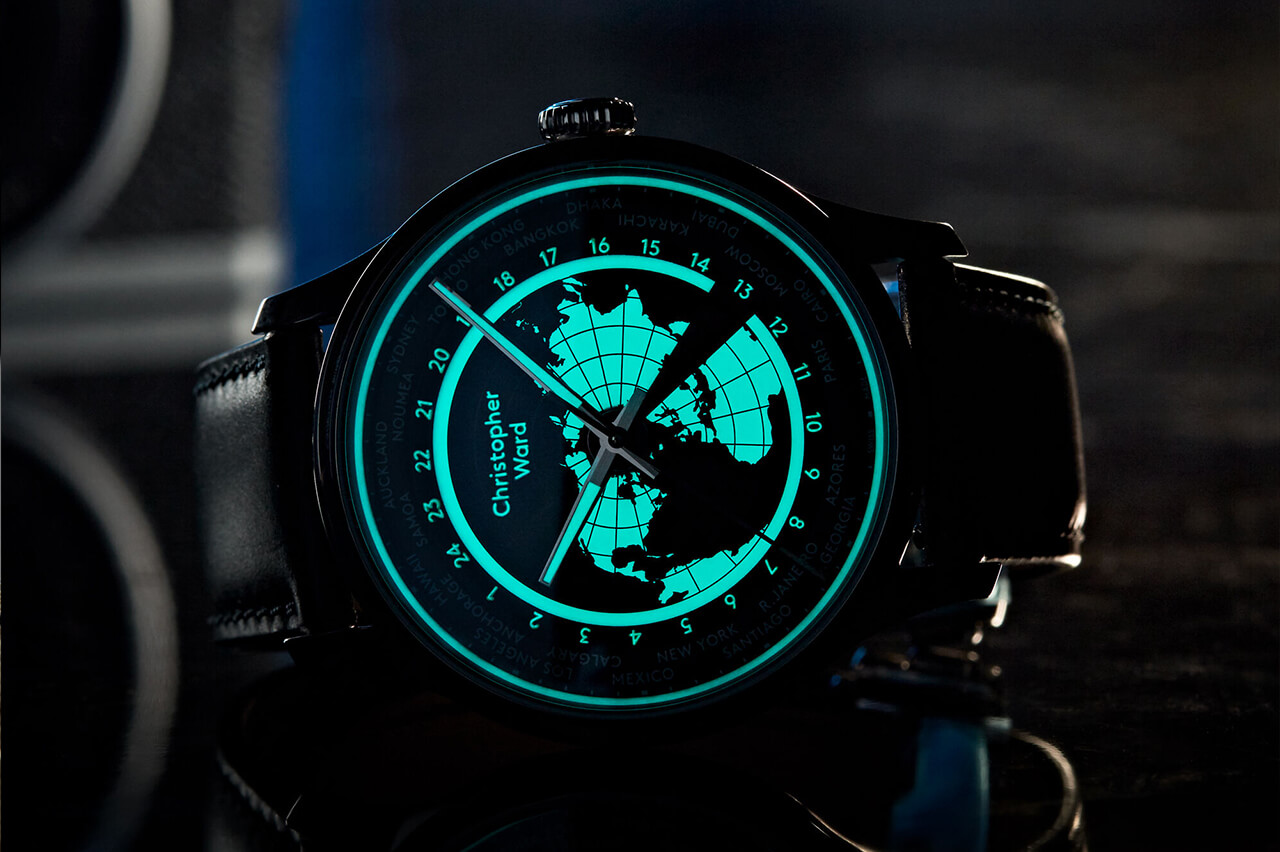 If you saw our previous coverage of the Moonglow, you’ll likely know what to expect. That immensely bright moon phase was part timekeeper, part nightlight, and the excess lume across the dial worked perfectly with the lunar complication. A worldtimer? That’s a whole different ball game.

“Our biggest problem was getting enough lume on the dial!” From looking at the watch, I wonder a little what head designer Adrian Buchmann’s been smoking (I don’t judge what people do to keep creative in lockdown) but as he explains, the end result is thanks to plenty of testing. 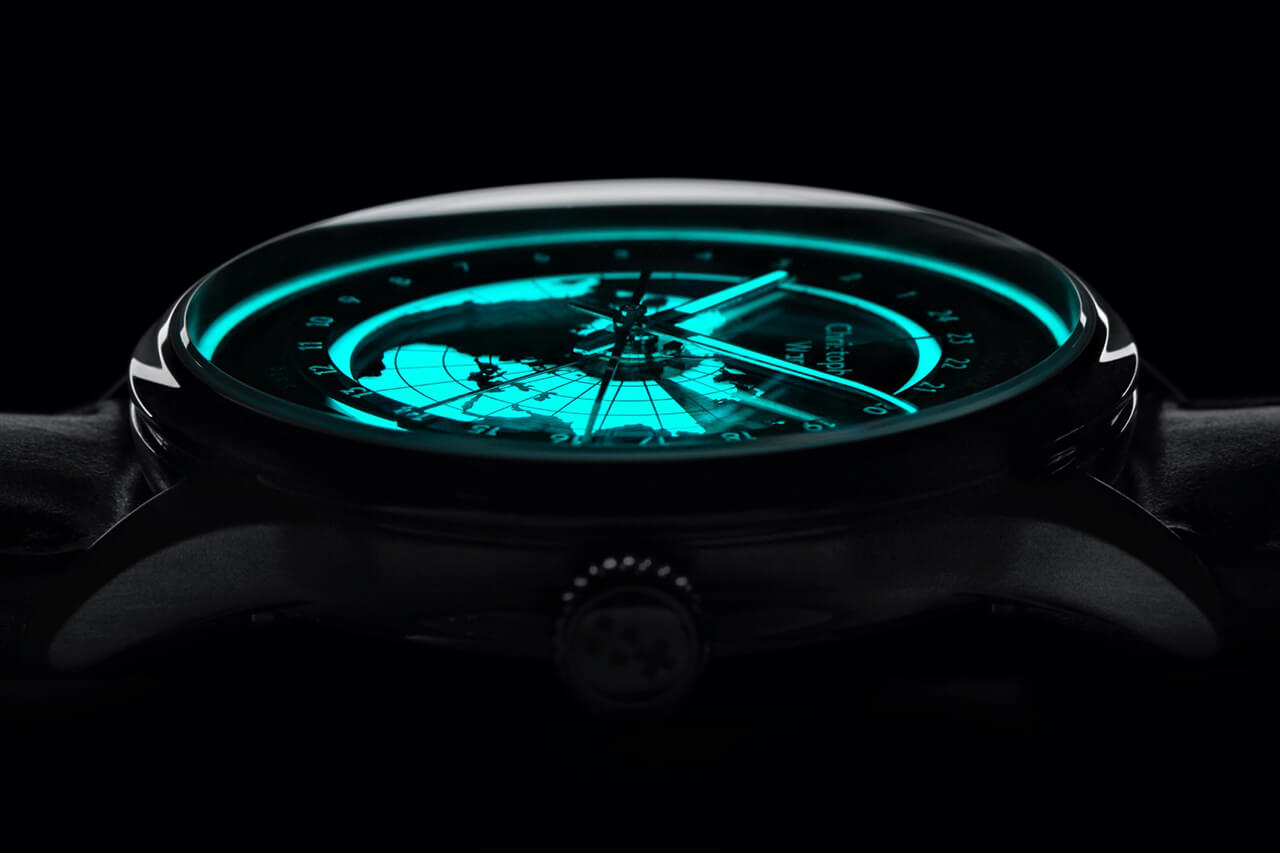 “The issue wasn’t that layer of lume itslef… it was the layers of sapphire crystal we put on top of it and then printed onto. We needed to get a bright, even light to show through those layers.” And how did they solve it? “Trial and error! You can mock things up all you want, but you only know what works when you actually build it.”

Apparently there was a lot of trial and error because this thing works. It’s hard to do the lume justice without seeing it in the dark for yourself, but suffice to say that if it’s on your bedside table you’d best leave it face down. It puts the ultra in ultra-lume. It’s bright enough in fact that, despite the timezone city names not being lumed themselves, you can still see them clearly in the light coming off the dial’s outer ring. 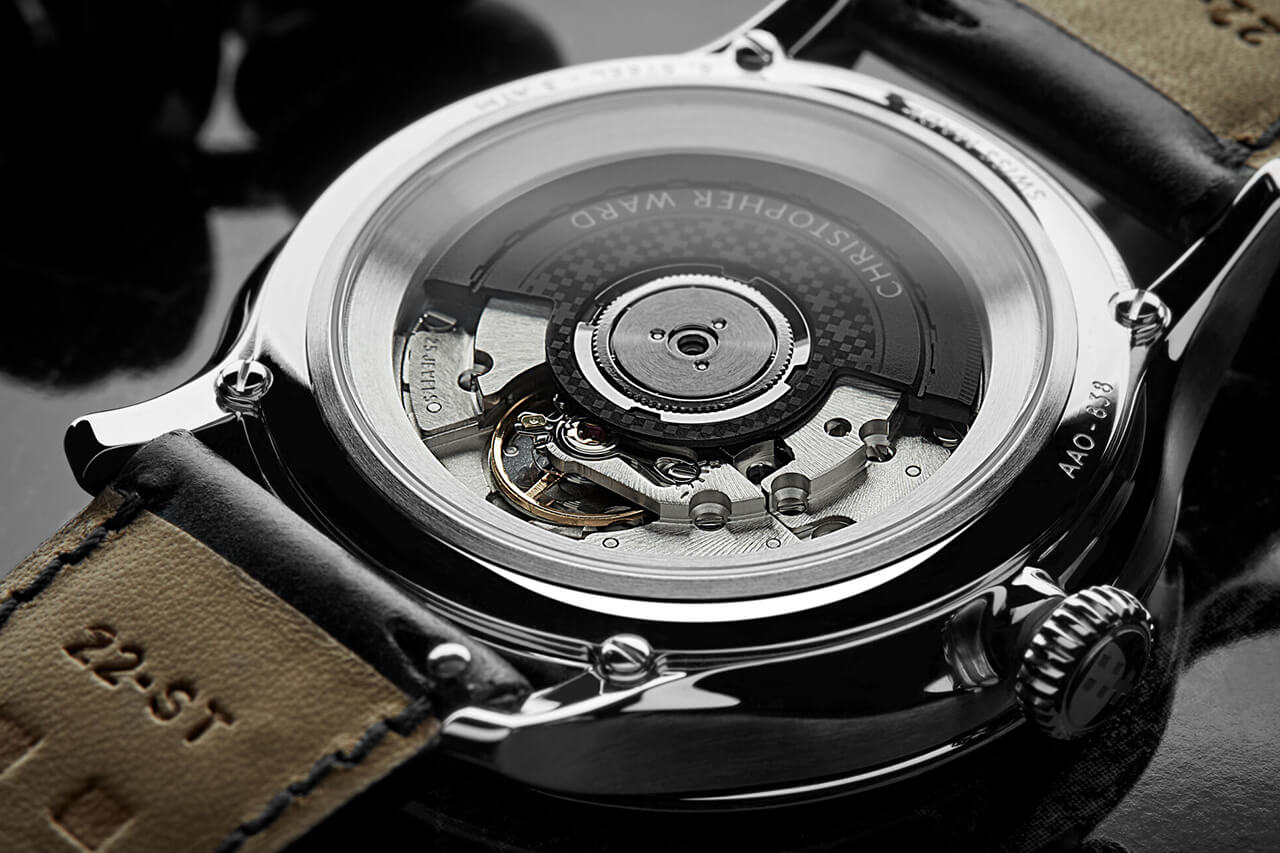 What’s perhaps more interesting to me is that Christopher Ward is calling this a dress watch. I’m not saying I dispute that at all, it’s just that traditionally dress watches have been gold, slimline affairs, and occasionally with diamonds but always elegant. At 43mm the C1 Worldglow is far larger than most dress watches, and lovely as its Lightcatcher case is (designed to, surprisingly, catch the light like an accessible Grand Seiko), it’s sportier than it is elegant, particularly on the mesh bracelet. 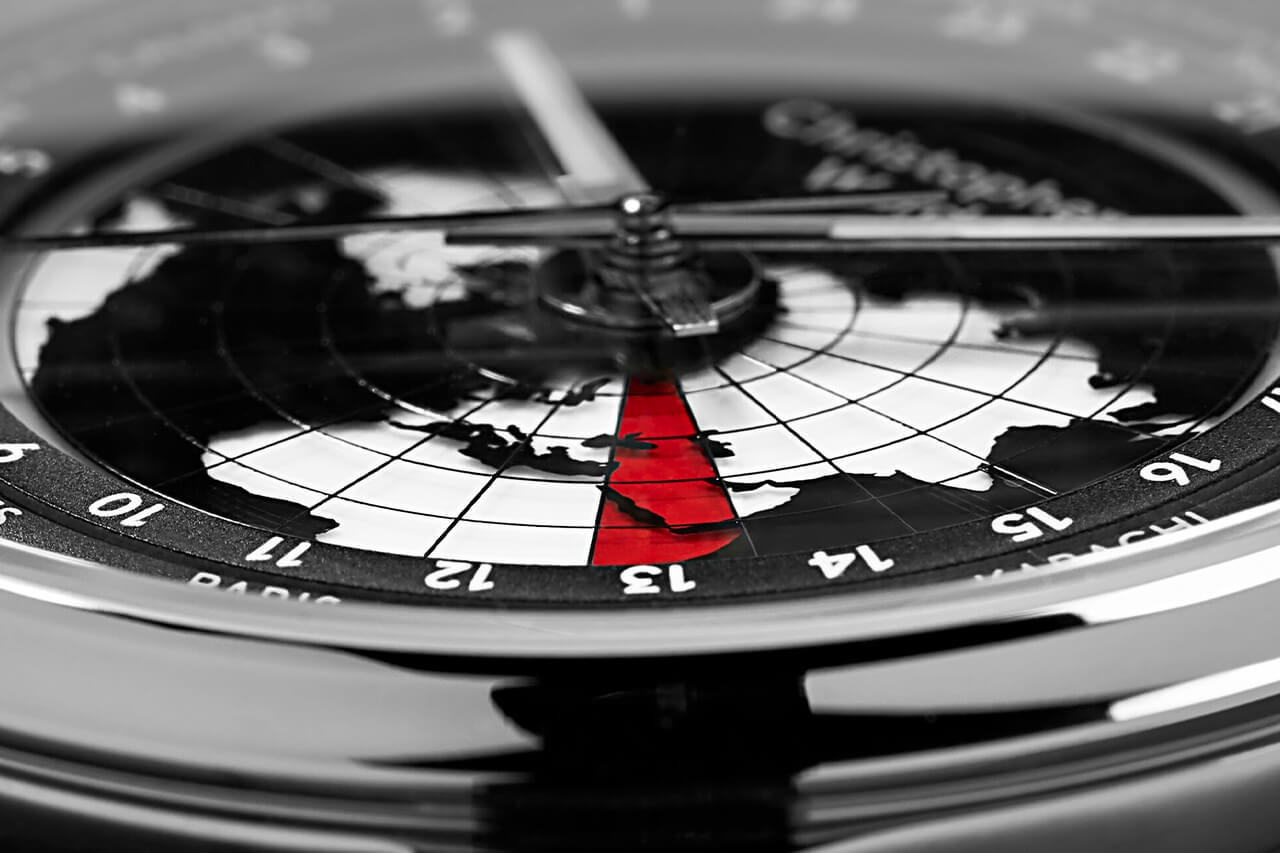 I’d argue though that with the lines blurring between what’s acceptable as a dress watch, the Worldglow is perfect. It has the jet-setting vibes innate to a worldtimer, is a relatively versatile size and, most importantly, where better to show off a visually-radioactive timepiece than in the low lighting that normally accompanies an evening soiree?

Whatever your thoughts on that particular subject though, there’s one thing we can all agree on about the C1 Worldglow and its predecessor, the Moonglow: they’re very much in a category all their own. Now we just need to wait and see what Christopher Ward will be lumeing up in the future. Day-Glow, perhaps? Farer tone down and spruce up their quintessential Lander with a new midnight blue dial and bronze...

In the latest instalment of our British Watchmaking series, we talk to Mike France, CEO of...