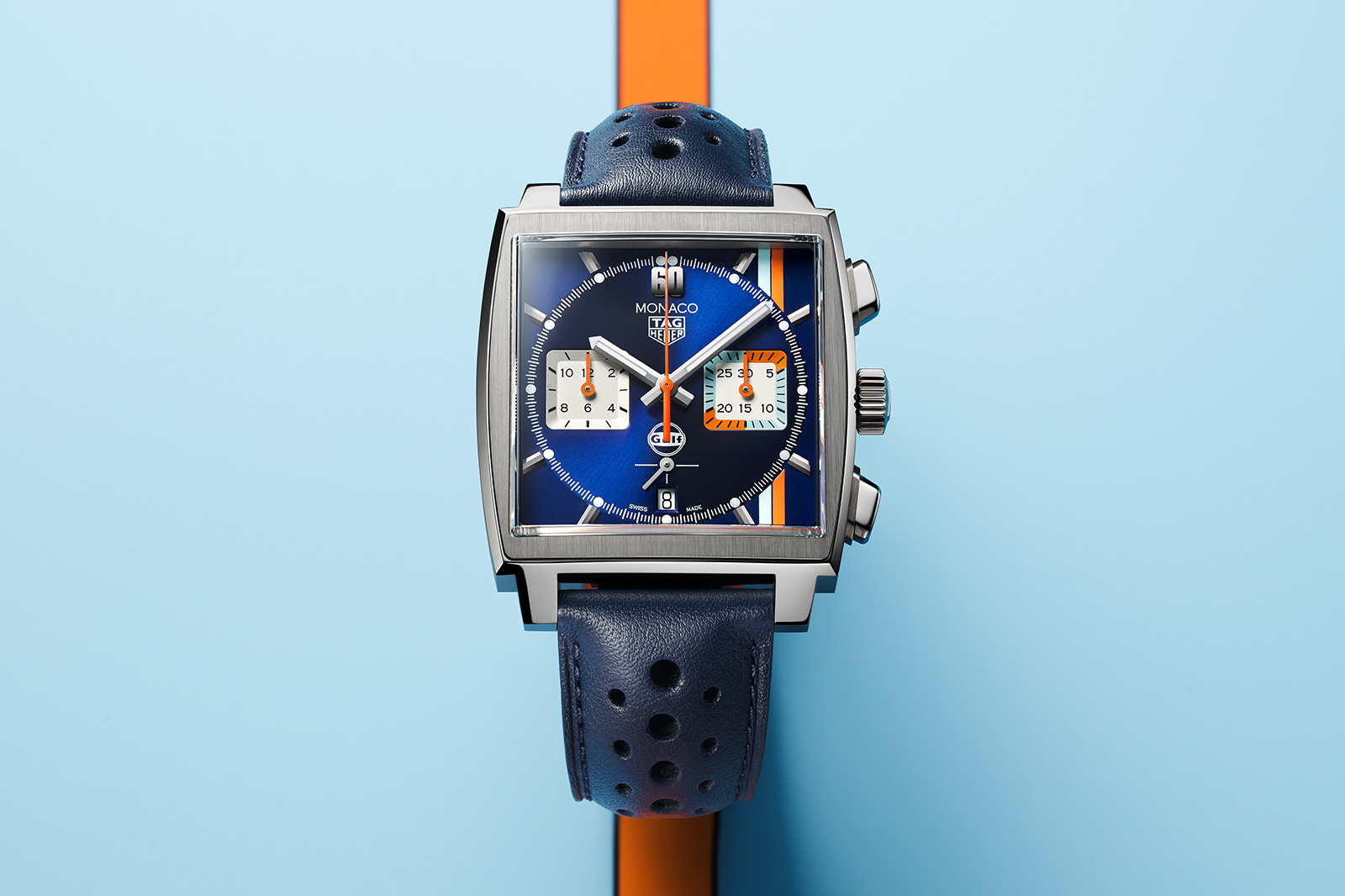 In the golden era of motorsport in the 1960s and 70s one of the most recognisable brands was Gulf. Their orange and light blue colour scheme adorned some of the period’s most iconic and successful cars, and following the 1971 film Le Mans, they became intrinsically linked to the Tag Heuer Monaco. In celebration of this relationship Tag Heuer started releasing their square racing watch in the iconic livery back in 2007 to enormous success, and for Watches & Wonders they’ve announced the Tag Heuer Monaco Gulf Edition 2022.

The story of how Steve McQueen ended up wearing a Tag Heuer Monaco in Le Mans is undeniably a good one. It all starts with Jo Siffert, a racing driver who was friends with Heuer and who drove the Porsche 917 under Gulf colours at Le Mans. He was hired to coach McQueen how to drive that same Porsche for the film and we can only imagine their discussions about wristwear. And so the association between Tag Heuer, Gulf and Porsche was born. 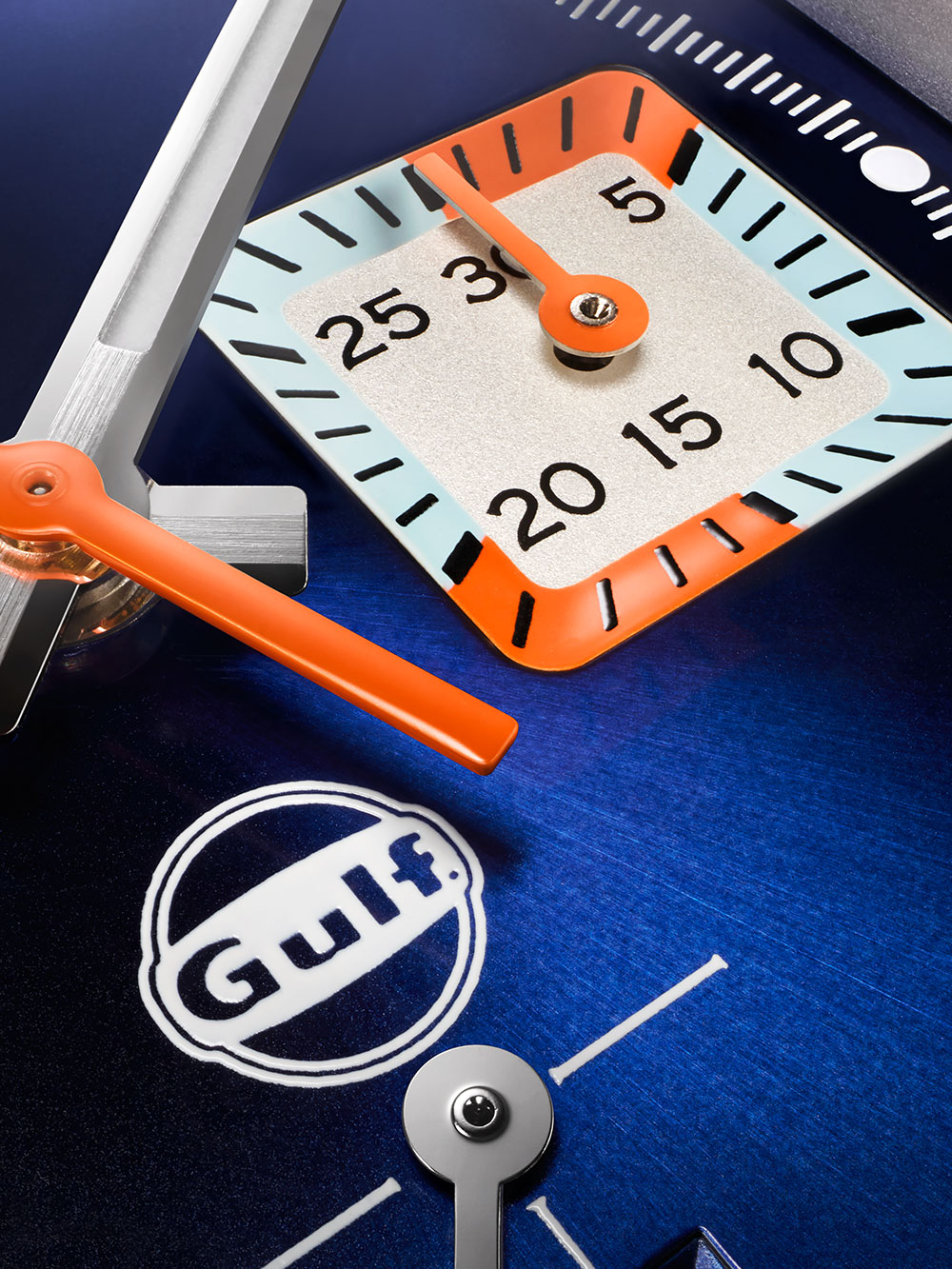 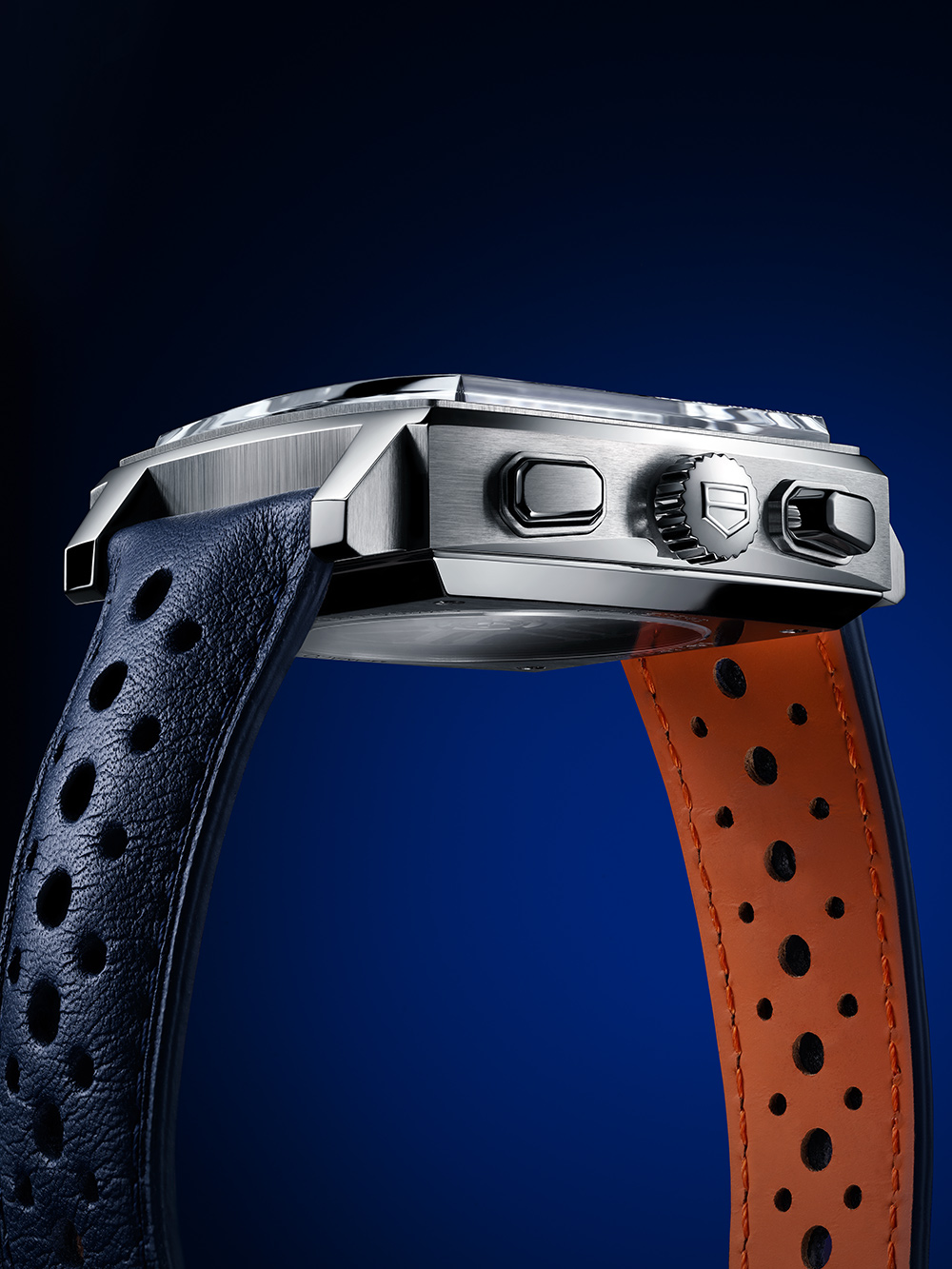 As expected, the new Tag Heuer Monaco Gulf Edition 2022 features the iconic light blue, dark blue and orange Gulf livery. However, instead of two complete vertical stripes as previously featured, the colours are interrupted by the deep blue, sun brushed portion of the dial. It gives it a fresh new look that’s more refined and elegant than previous versions.

For the first time the scale of the 30-minute chronograph counter has been realised in light blue and orange, furthering the Gulf theme. Additional firsts come in the form of the pure white Gulf logo at 6 o’clock and the “60” numeral at 12, which is a nod to the historical racing number on Porsche Gulf cars. 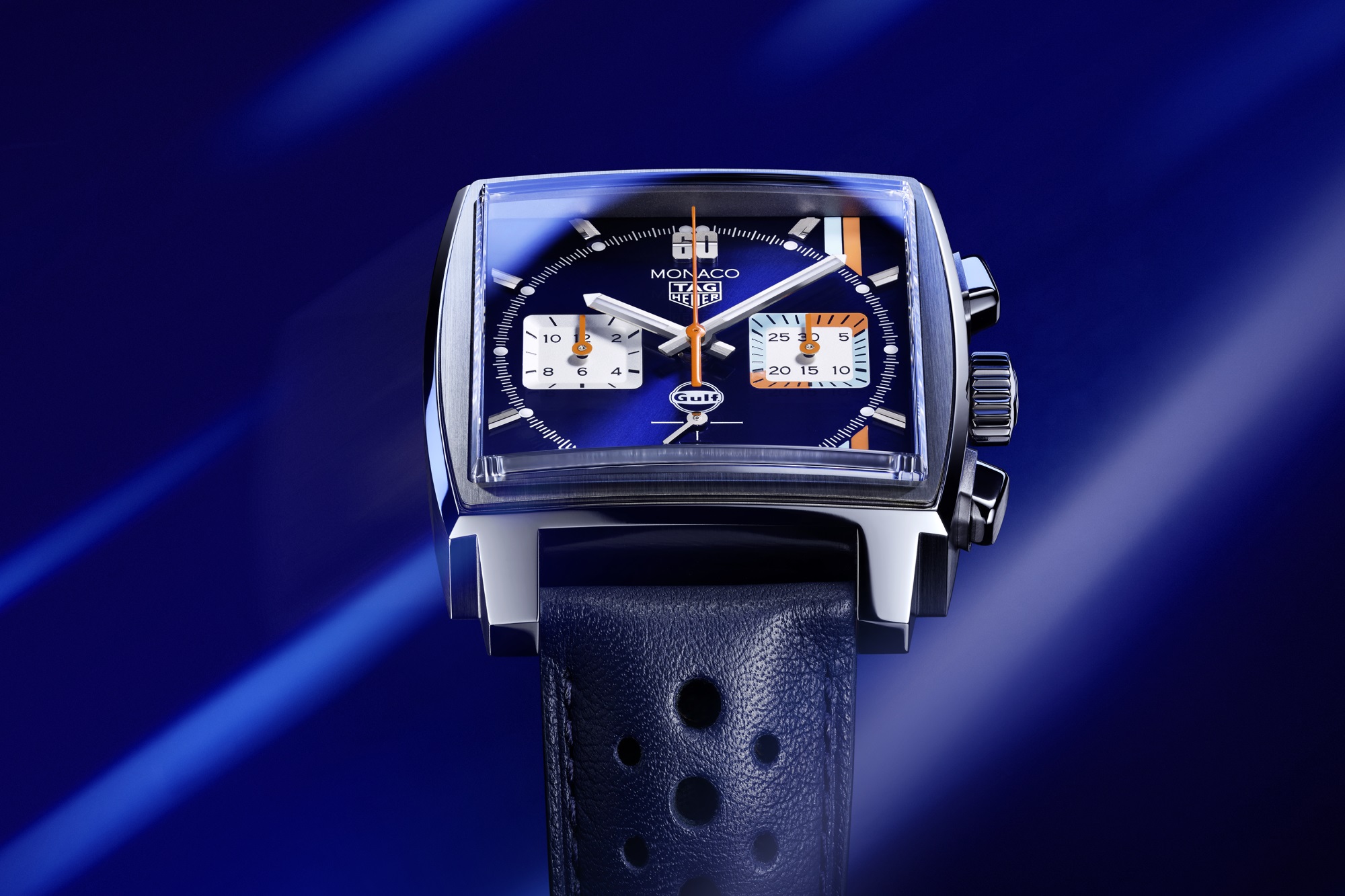 The case is brushed stainless steel in the signature Monaco square shape with a 39mm diameter. It sits on a perforated leather strap with a blue upper and orange lining, in keeping with the racing style of the watch. For 2022 the strap has been adjusted so that the holes are now multiple sizes, a reflection of original ‘70s models. 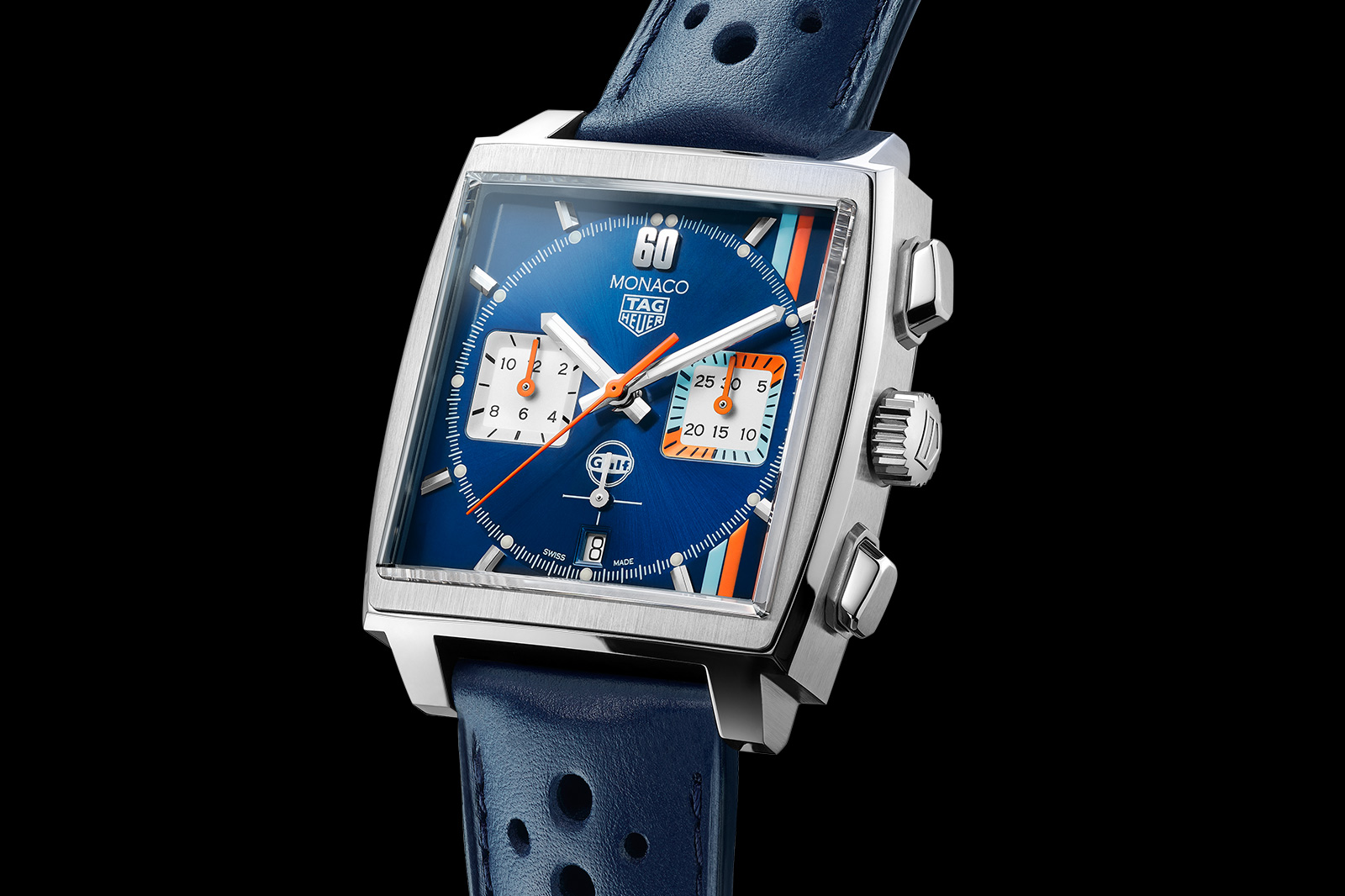 Powering the chronograph is the in-house Calibre 02, an automatic movement that has an 80-hour power reserve and a distinctive 2/3rds rotor. For the Gulf Edition, the rotor’s traditional red engraving has been revitalised in Gulf orange, making it stand out much more dramatically. In terms of functions, it has hours, minutes, small seconds, a date window at six, central chronograph seconds, plus 12-hour and 30-minute timers.

This watch provides everything you could want from a special edition. On a technical level it performs exactly the same as the existing Tag Heuer Monaco, but it’s been given an updated livery and a few tweaks that make it stand out, all of which is sure to make the Monaco Gulf Edition 2022 as popular as its predecessors.