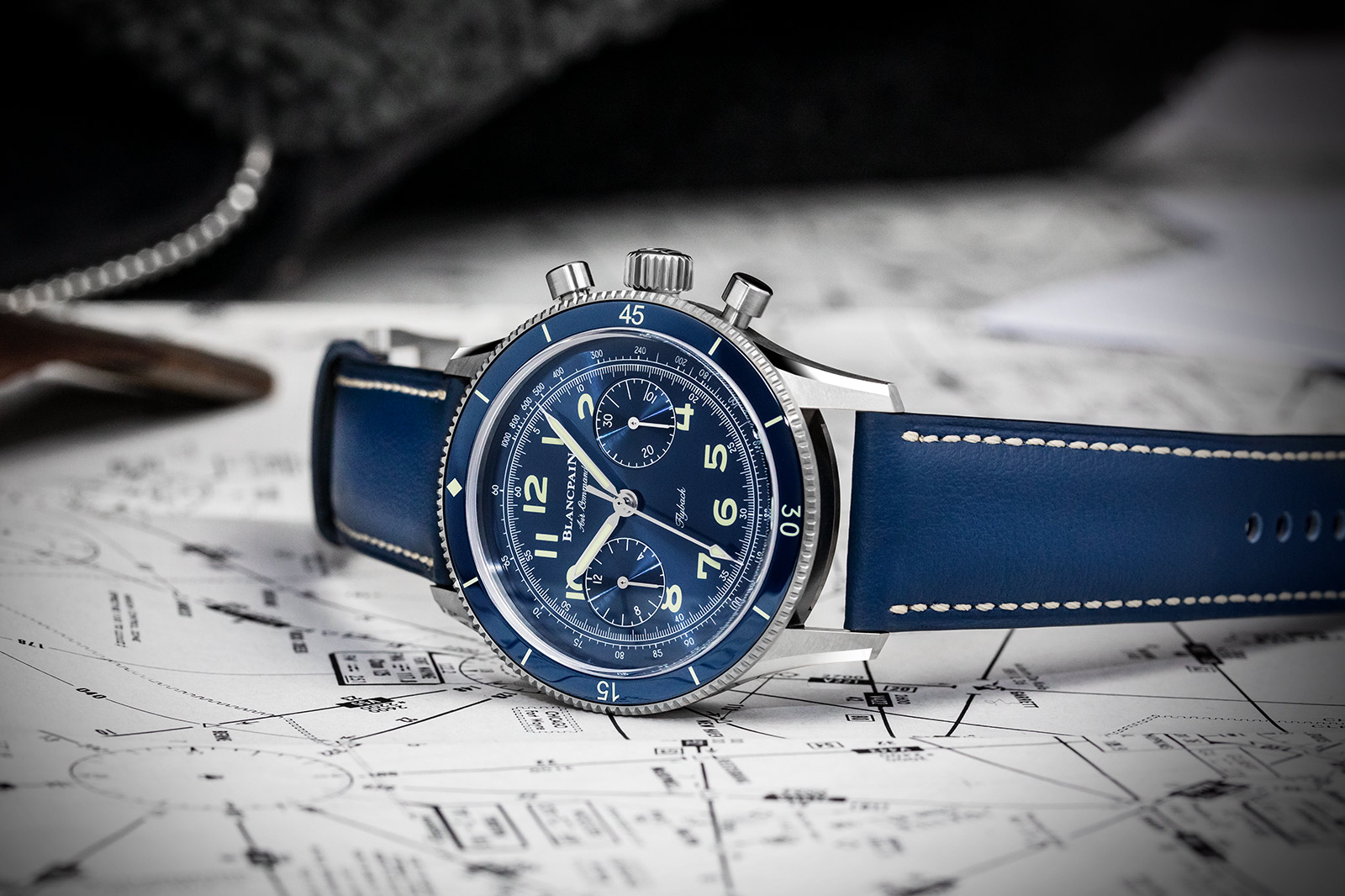 Blancpain’s Fifty Fathoms is without a doubt one of the most iconic dive watches in history. However, that doesn’t mean they can’t produce an equally excellent pilot’s watch and in the 1950s they created the Air Command, a small number of pilot’s chronographs that were to the air what the Fifty Fathoms is to the sea. And now they’ve brought it back with a new model that will be a permanent addition to the Blancpain collection, the Air Command Flyback Chronograph.

The original, vintage Air Commands were only ever produced in limited numbers, making it all but impossible to come by one today. Blancpain first tested the waters for a modern take on the design with a steel limited edition in 2019. Following the success of that model (it sold out) the new titanium and gold versions are here to stay. 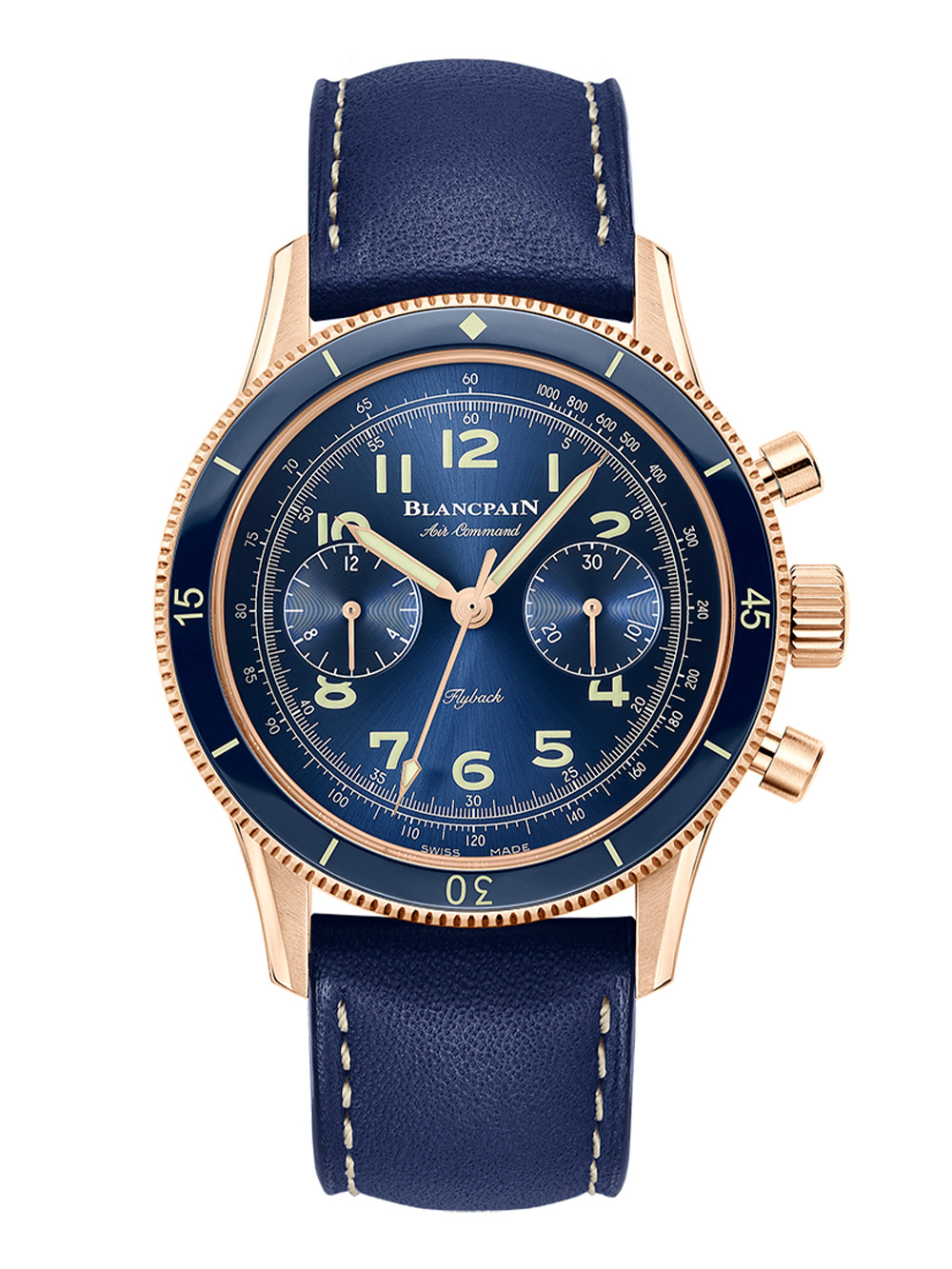 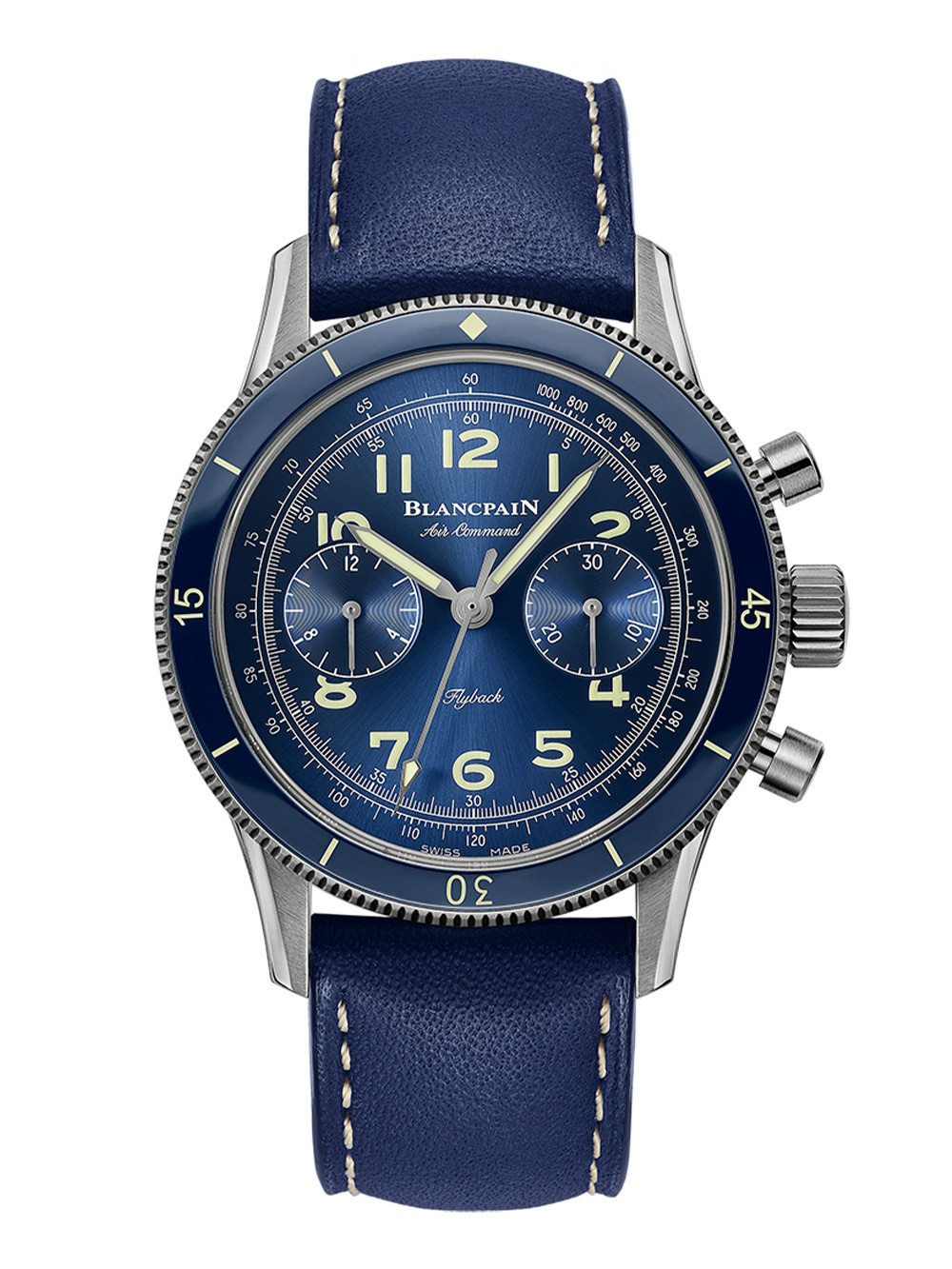 As I just mentioned, there are two versions of the new model available, one in red gold and the other in grade 23 titanium – a high end variety of the metal rarely seen in watchmaking. Regardless of which material you prefer, the case measures 42.5mm in diameter with classic pilot’s watch elements like a large, fluted bezel and an oversize crown. It also has two pushers for operating the chronograph functions.

The design oozes retro flair harking back to the 1950s, such as the box sapphire crystal. However, while it’s retro in style, the materials used in the watch are entirely modern. For example, the rotating countdown bezel is made with a scratch resistant ceramic insert. 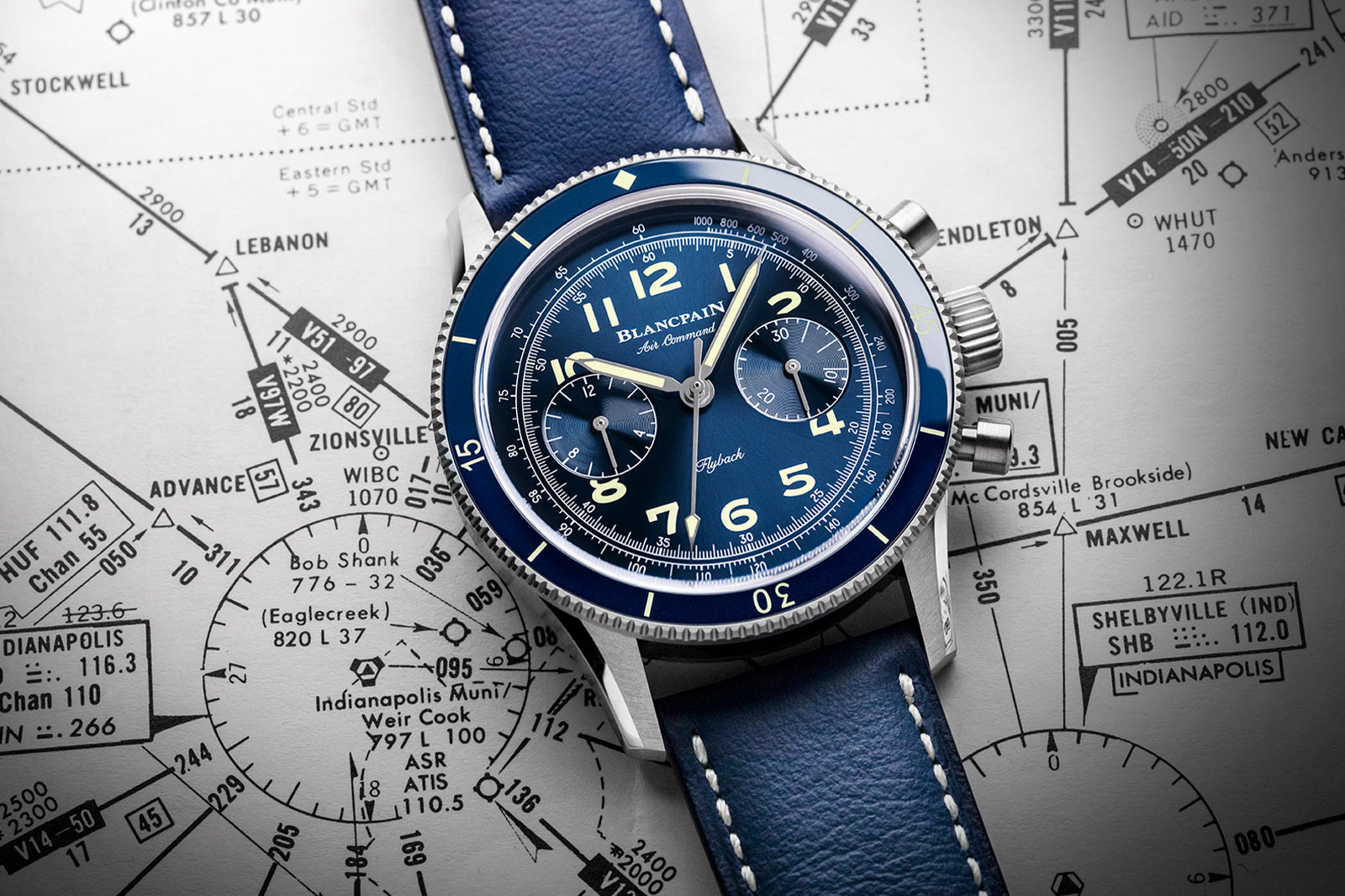 As is the norm for pilot’s watches, the dial is all about legibility. It has a simple bicompax layout with contrasting sunray finishing on the main dial and snailing on each subdial. There are large Arabic numeral hour markers with plenty of lume and a circumferential tachymeter. The primary colour throughout the dial and bezel is blue.

Aesthetically, I have to say it more than lives up to its role as a Fifty Fathoms of the air. However, make sure you don’t treat it as a dive watch because the Air Command Flyback Chronograph only has 30m water resistance, so it should never so much as pass near the wet stuff. 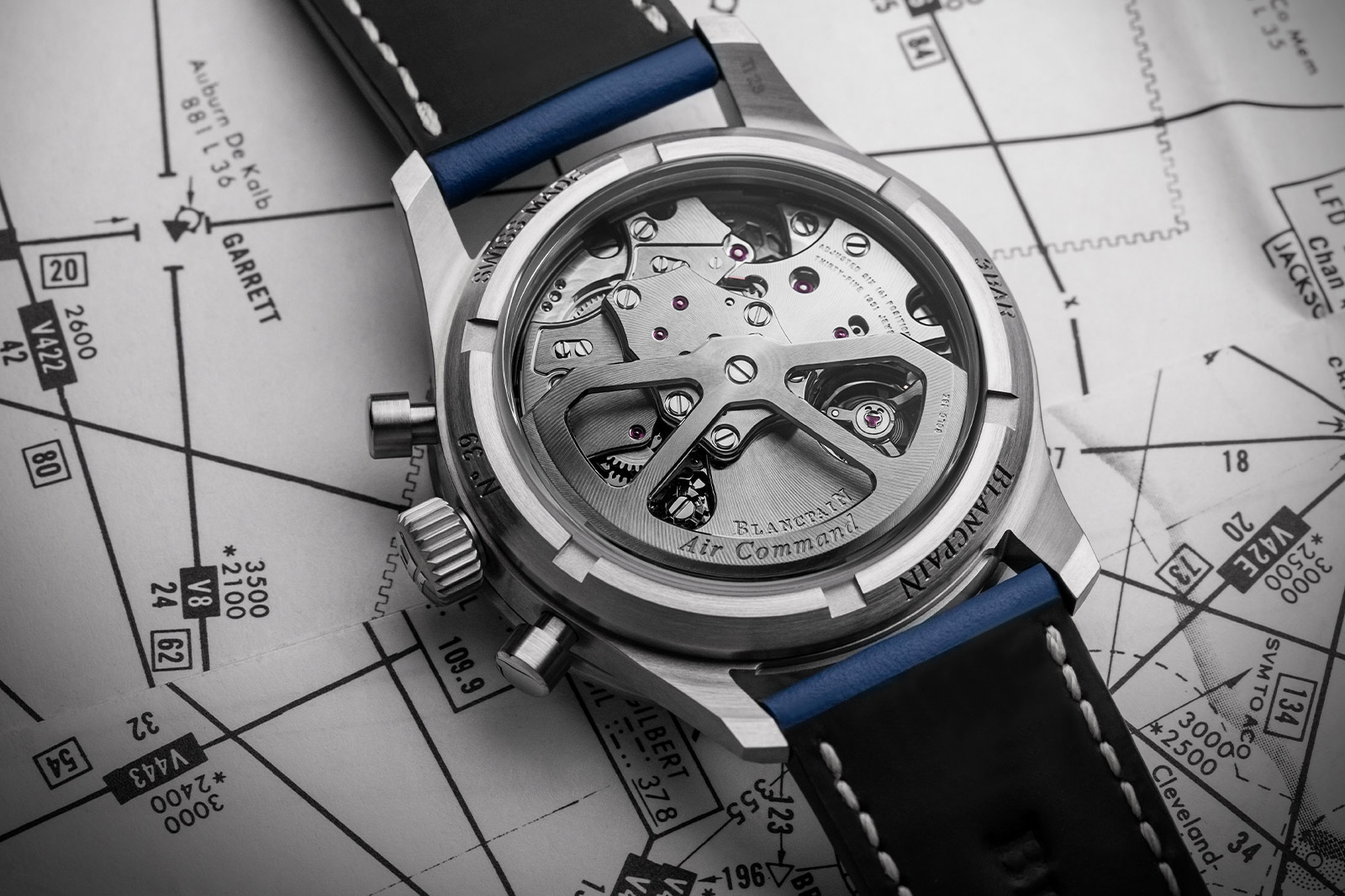 Inside is the Manufacture F388B movement, which has a 50-hour power reserve. It’s a flyback chronograph which means you can restart the chronograph function with a single pusher press while the chronograph is running, as opposed to stopping it, resetting it and restarting it with three pushes. It’s a great quality of life inclusion for pilots.

Personally, I favour the titanium version as I tend to lean away from gold on anything but a dedicated dress watch. Although I will admit that with that thick bezel, a bi-colour variation would look stunning. The titanium is also the more affordable of the two at £15,900 as opposed to the red gold’s price tag of £25,600.