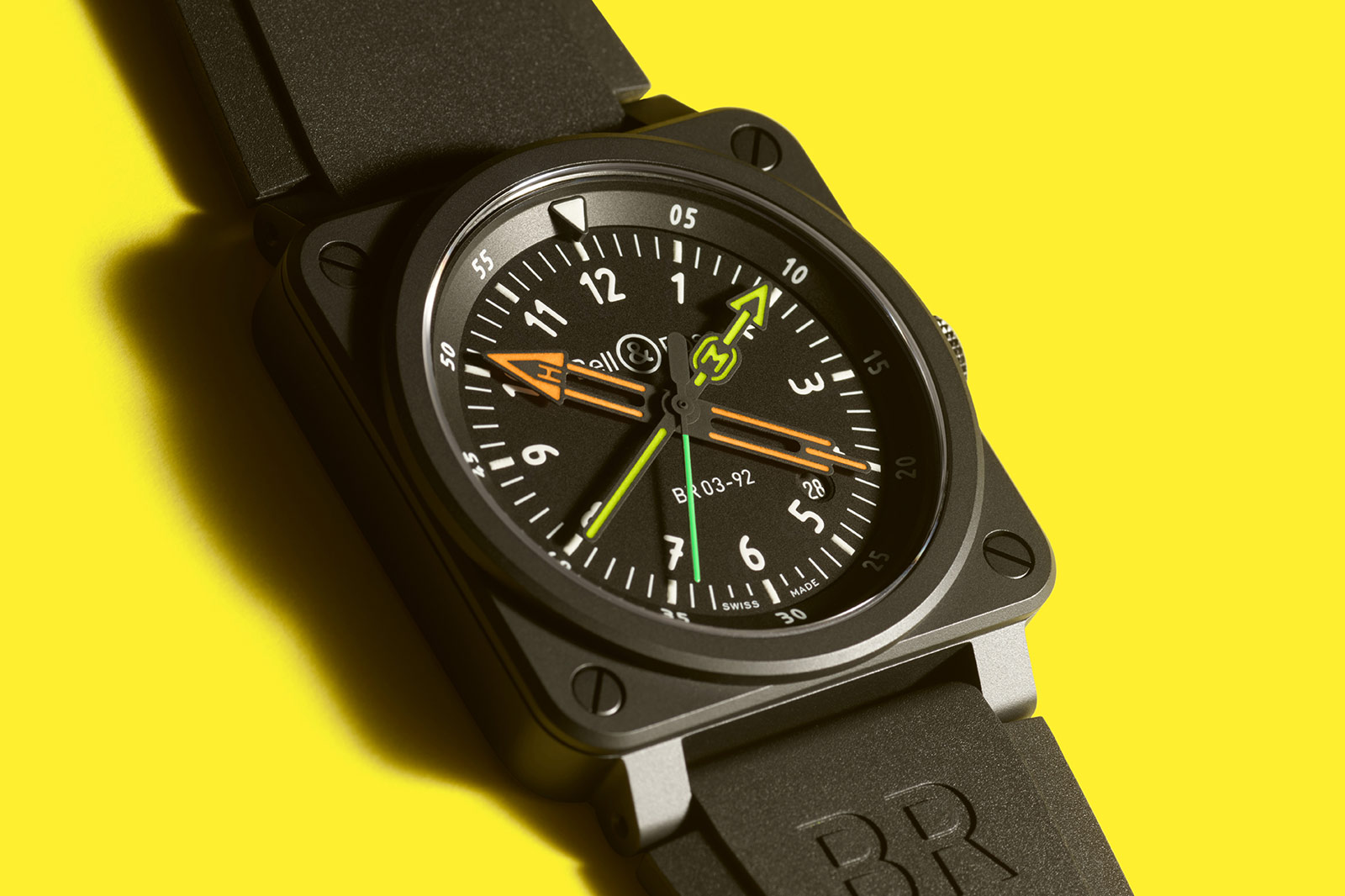 Every Bell & Ross watch is inspired to some degree by the aviation instruments of a cockpit, especially wen it comes to the watchmaker’s signature square cases. Occasionally though they take things a bit more literally with watches like the HUD, the Red Radar Ceramic and now the BR 03-92 Radiocompass.

In aviation, Radio Compasses are an integral part of navigation. They operate by detecting radio signals and indicating the direction of the transmission, allowing the pilot to determine their bearing in relation to the signal. More advanced Radio Compasses can monitor two different radio signals simultaneously, providing more accurate navigation information via triangulation. It’s this type of instrument that the BR 03-92 Radiocompass reimagines. 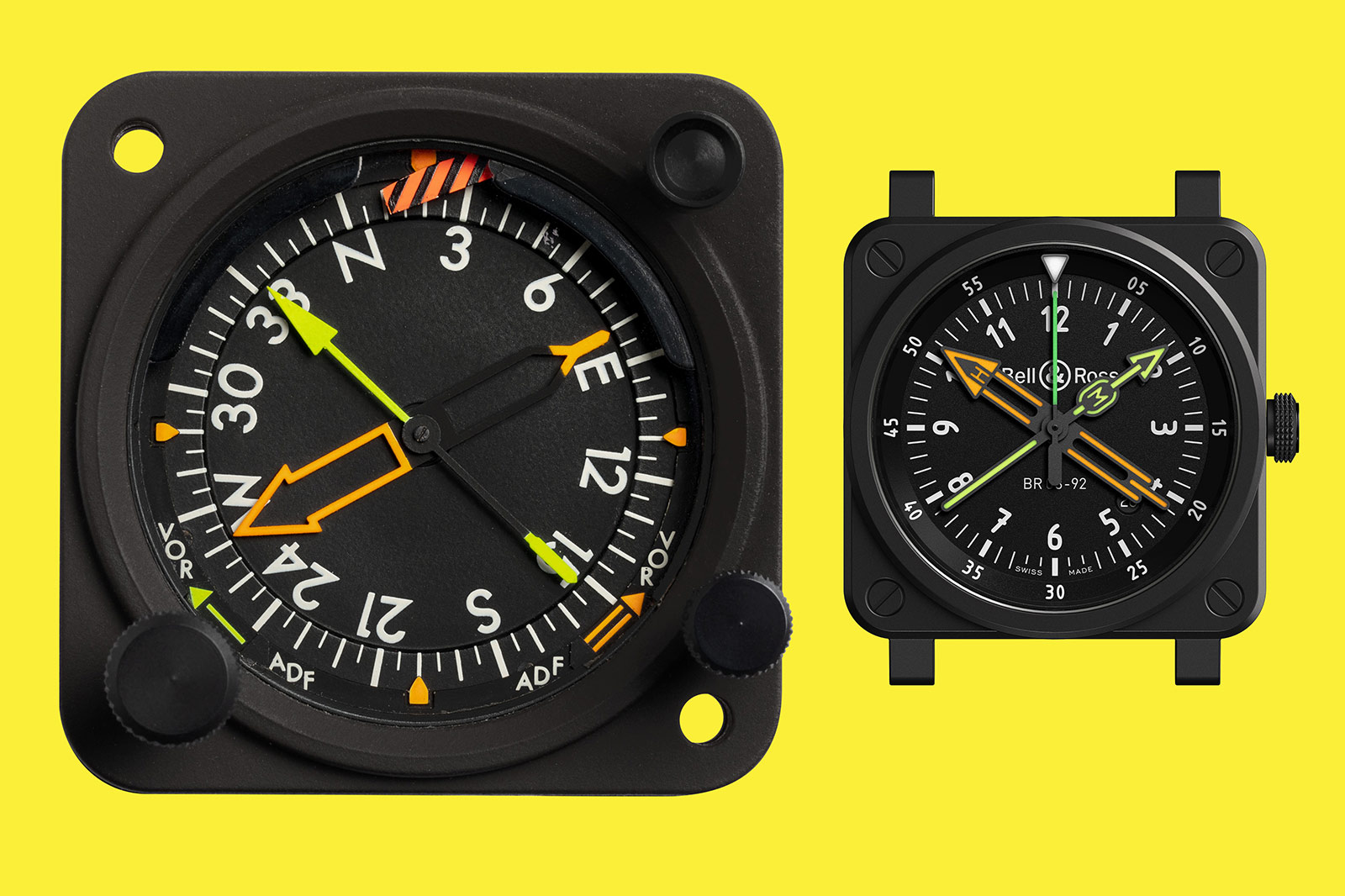 It achieves this through the stylisation of the watch’s hands. The hour hand takes after the main ADF (automatic direction finder) hand of a radio compass, which is a thick, double-barred piece in highly legible orange. Markedly thinner is the minute hand in yellow. Its shape is taken from the secondary VOR (Very high frequency Omni-directional Range) hand that allows for triangulation. 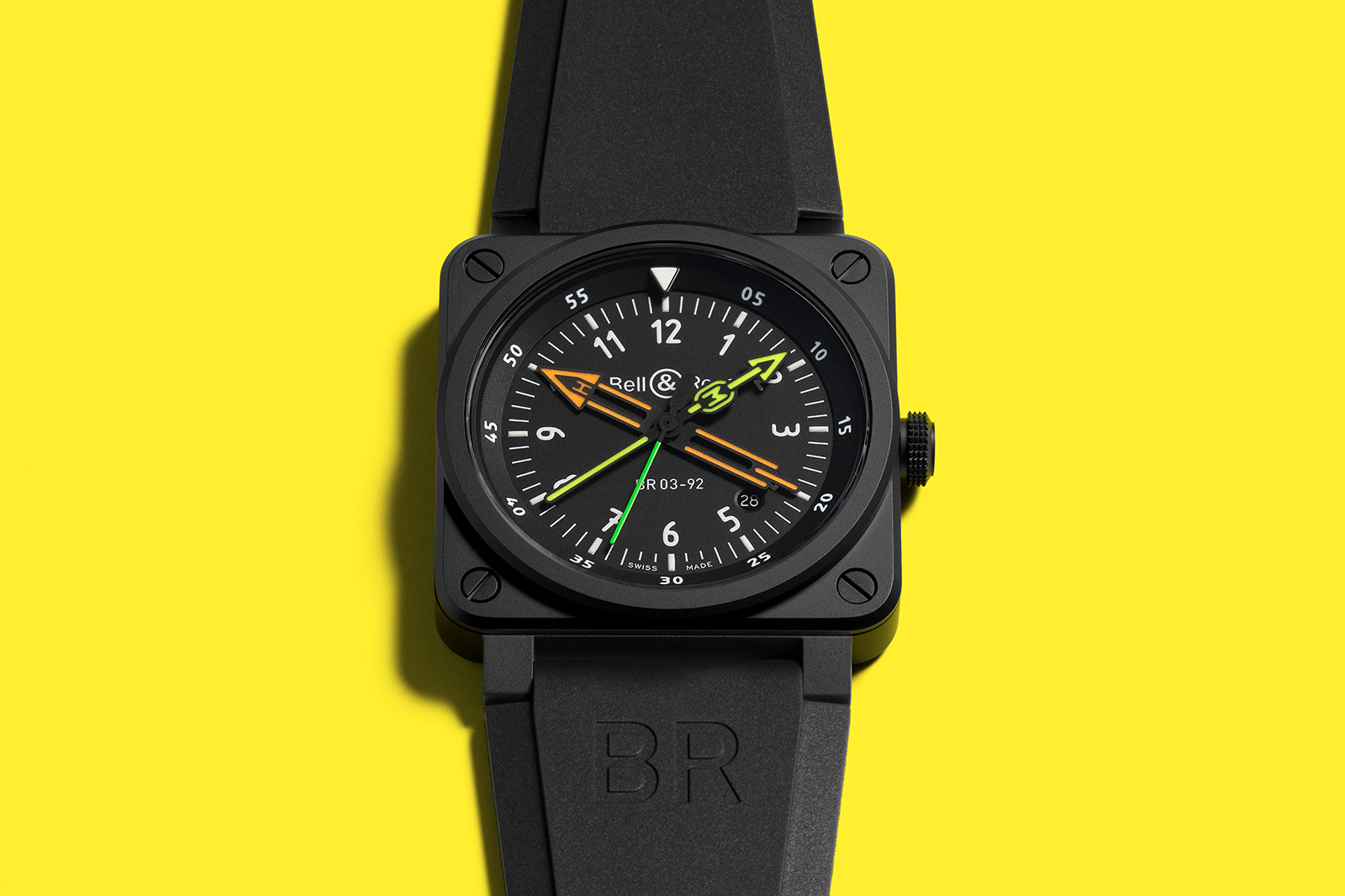 An interesting design consideration is that because radio compasses are directional instruments the hands extend to the external scales in both directions. Something which is problematic on a watch as only one side is needed and having both could confuse the wearer. To avoid this issue on the BR 03-92 Radiocompass there’s H and M initials on the active side of the hour and minute hands. The green seconds hand doesn’t have the same issue as there isn’t a radio compass equivalent. 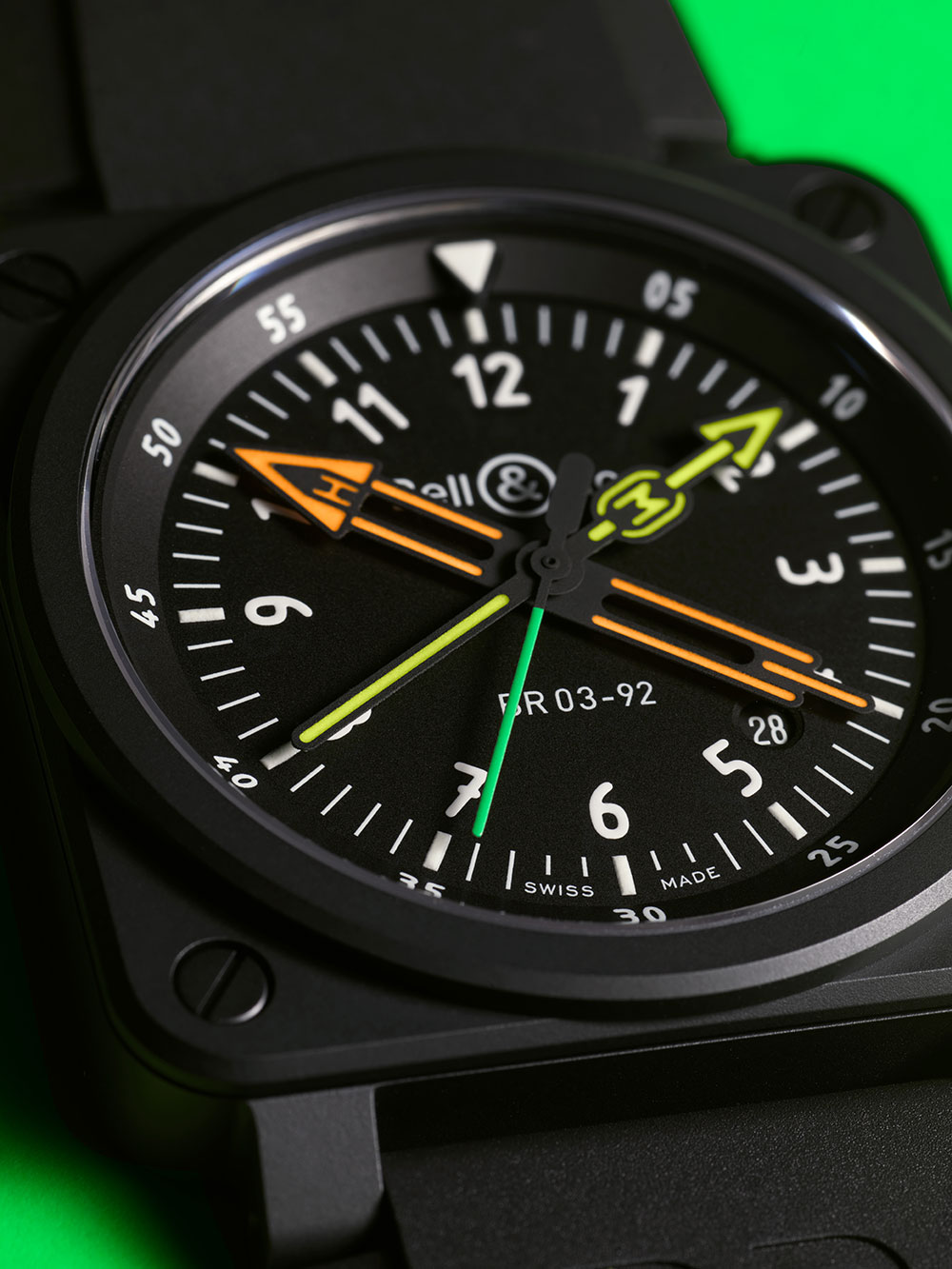 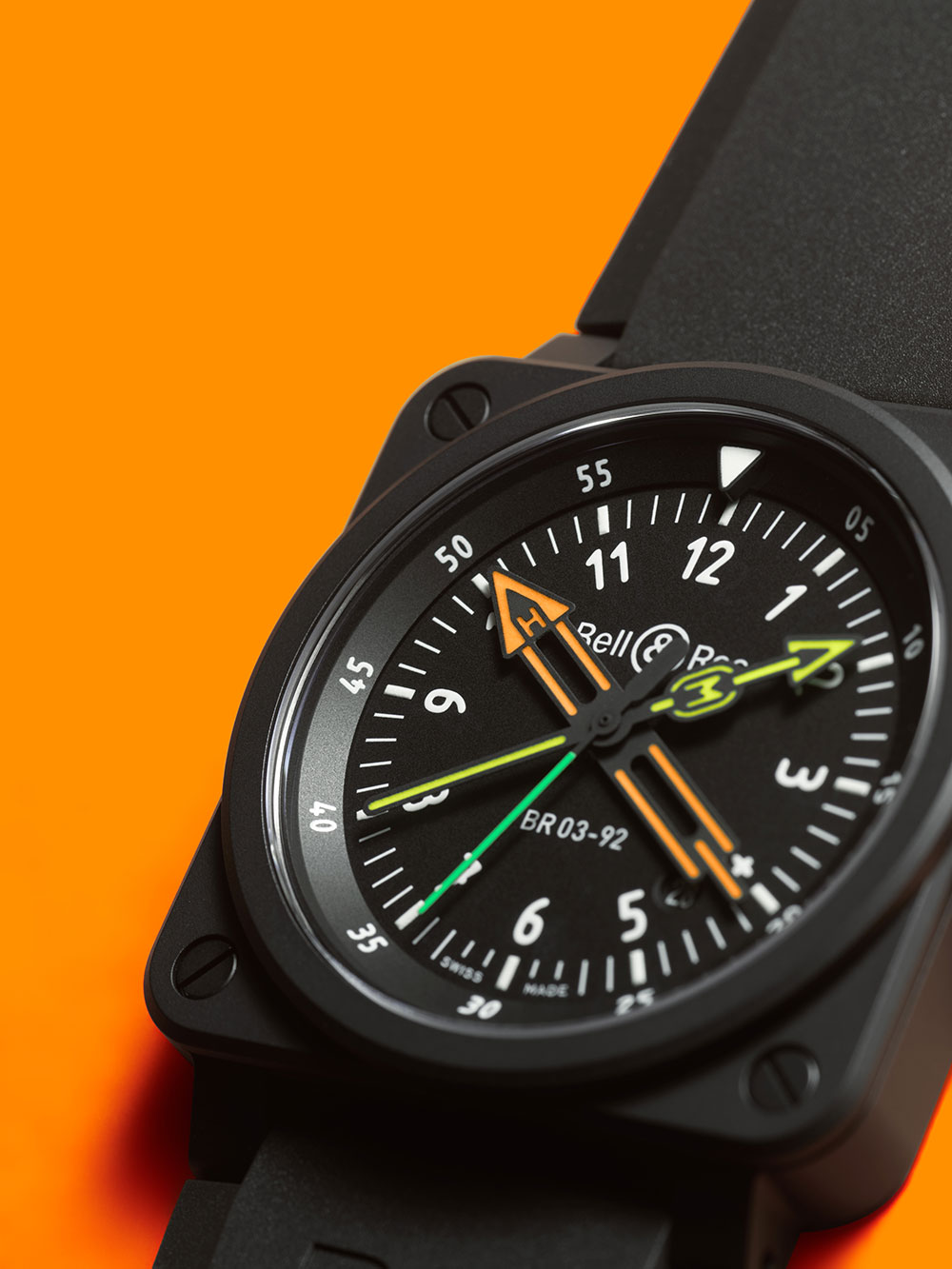 Elsewhere on the matte black dial, the hour, minute and seconds tracks around the periphery have been designed with readability at the fore. They’re comprised of white numerals and indexes in a professional aviation typography called isonorm. There’s a stark contrast between the colourful hands and monochrome dial, making the whole design pop satisfyingly. 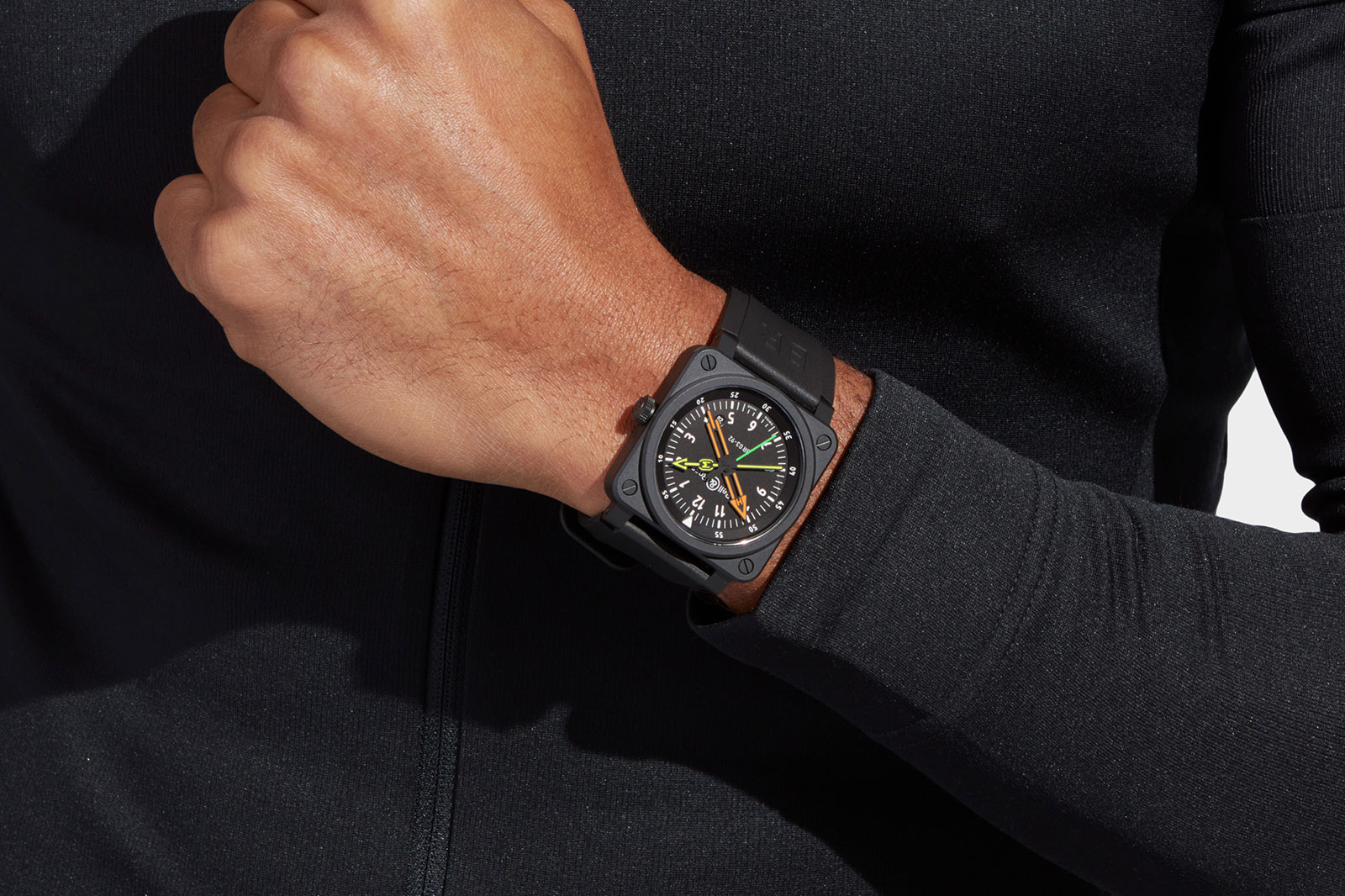 In terms of the BR 03-92 Radiocompass’ case and movement, they’re identical to the previous Red Radar and HUD editions. Specifically, a 42mm square case in black ceramic housing the BR-CAL.302. Familiar and dependable. Another similarity to its predecessors is that it’s limited to 999 pieces at £3,400.