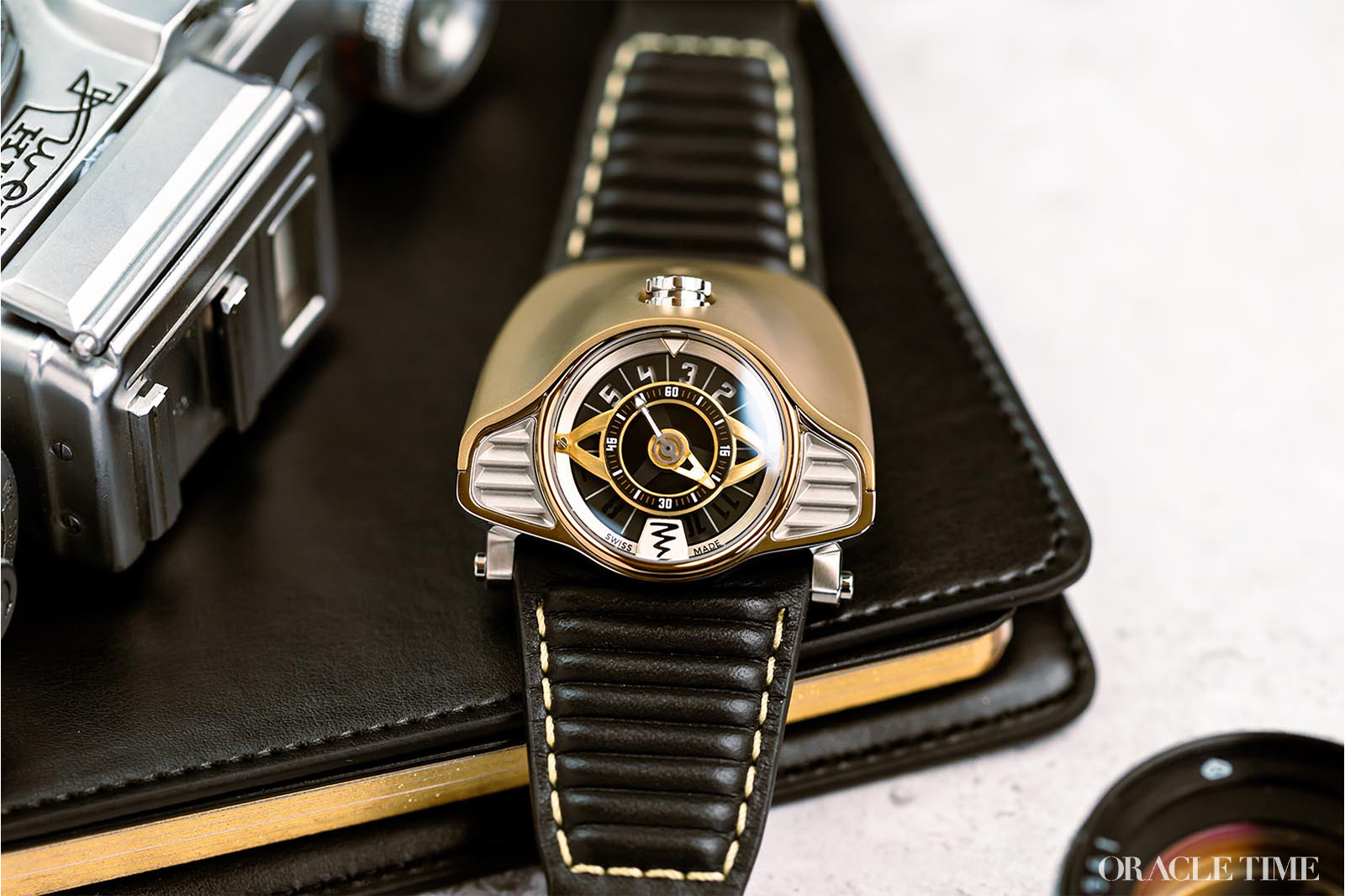 There are many breeds of racing watch out there. There’s the dabbling, toe-in-the-water kind that at best show off a bit of historic livery. There are the committed performance pieces that use the kind of aerospace materials you’ll find in a pit lane – carbon fibre in its various forms, titanium, et al. Then you have the ones that go above and beyond, that are inseparable from the racing world – the Hublot Ferrari, the Jacob & Co Bugatti and this, the Azimuth Gran Turismo.

Unlike the others, the Azimuth GT isn’t actually built in collaboration with any particular car maker. That doesn’t stop it being instantly recognisable though, with the flowing curves echoing the bonnets of 1960s 911s. Echo may be the wrong word here; it’s like wearing a chunk of a model car on your wrist. 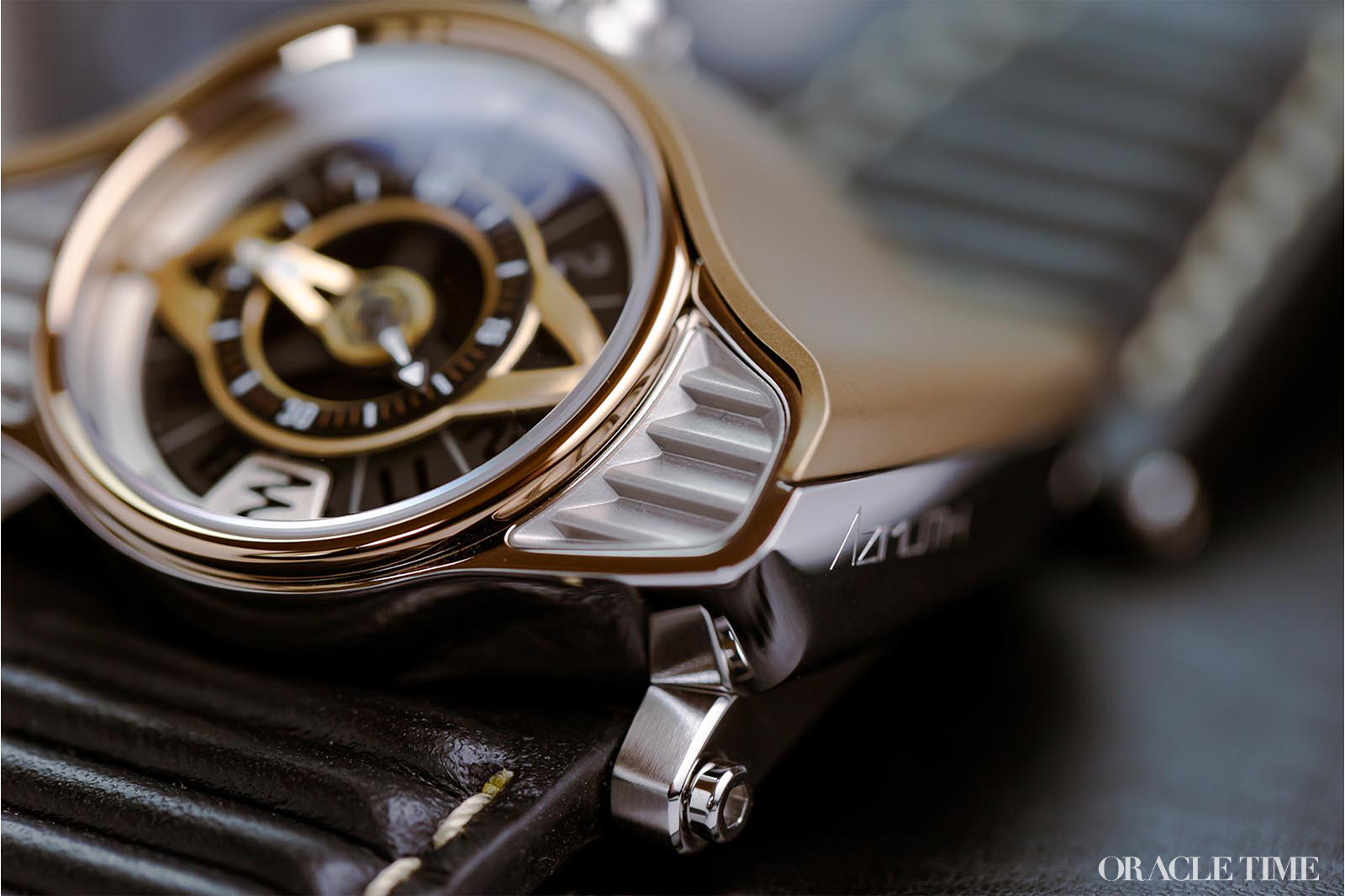 In fact, I’ve not worn anything quite like it before. The easy reference point would be MB&F, which have a similar (if slightly more idiosyncratic) approach to case shapes, namely architectural, boundary-pushing constructions. In fact, MB&F is a good jumping off point for the Azimuth Gran Turismo in that it’s a world away from what more collectors would call a watch.

A good part of that is the layout. It’s a driving watch in the practical sense, which means it’s designed to be read at a glance while you have both hands on the steering wheel – hence the dial being on the side. The dial itself references a very different car, the larger-than-life dashboard instruments of the iconic Mini Cooper. It’s comprised of an hour disc at the top with the time told at the 12 o’clock position, with skeletonised second and minute hands underneath, read off machined tracks. It’s industrial, three-dimensional and hard to ignore. 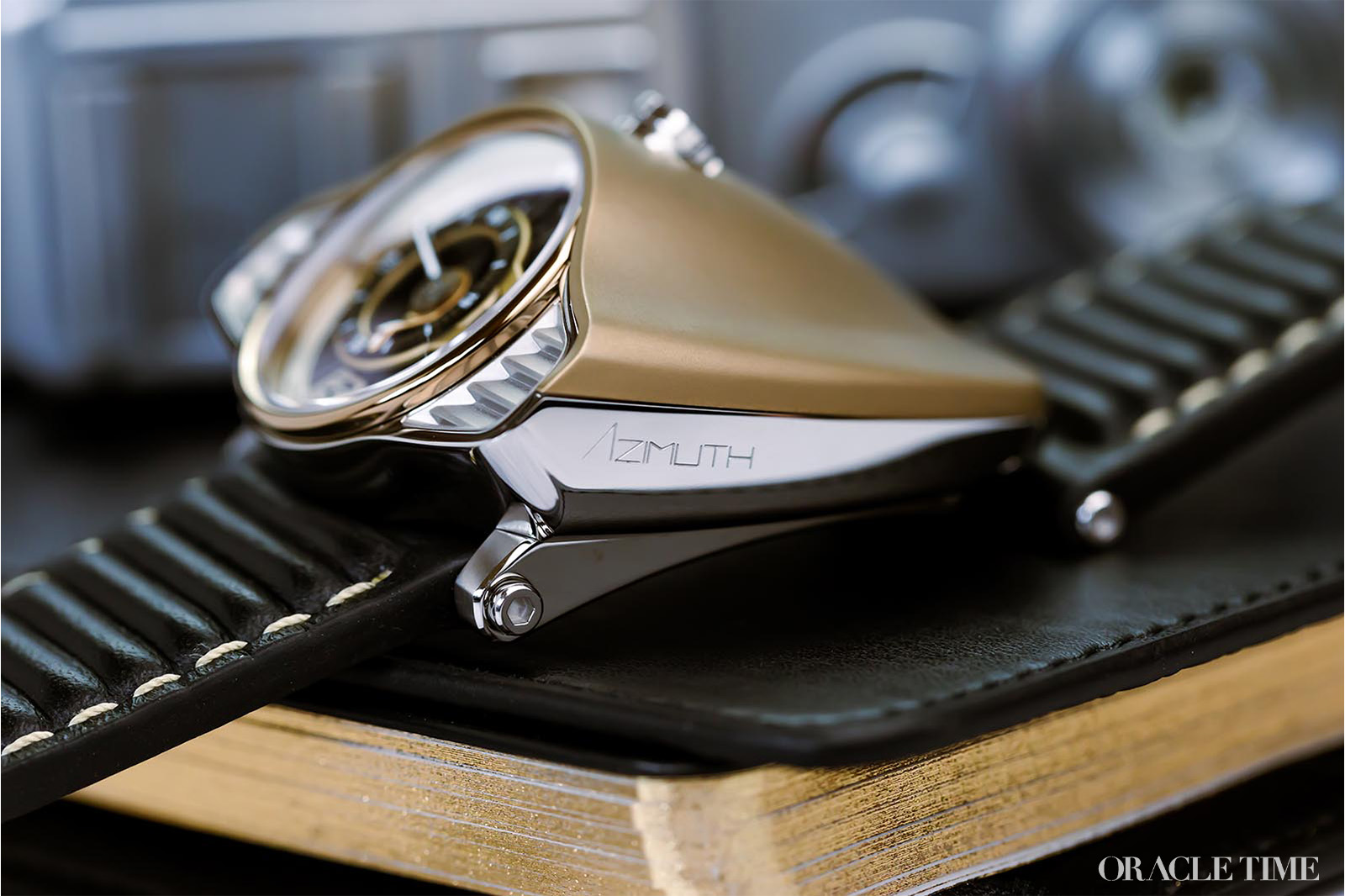 The result is a timepiece that it looks more like a mini clock than a traditional wristwatch, the kind that suits a dashboard nicely but doesn’t exactly fit all that well underneath a shirt cuff. That’s not always a bad thing. Not every watch needs to be a slimline dress timepiece and, for the kind of guy that spends weekends working on his own vintage 911, this is a mechanically intriguing piece of horology.

Inside the Azimuth Gran Turismo is the ETA 2671, a workhorse third party movement that’s been adapted to this new layout. It only has a 38-hour power reserve which isn’t great these days, but using the crown on the top of the watch ‘bonnet’ is fun, so winding it on occasionally isn’t the worst thing in the world. 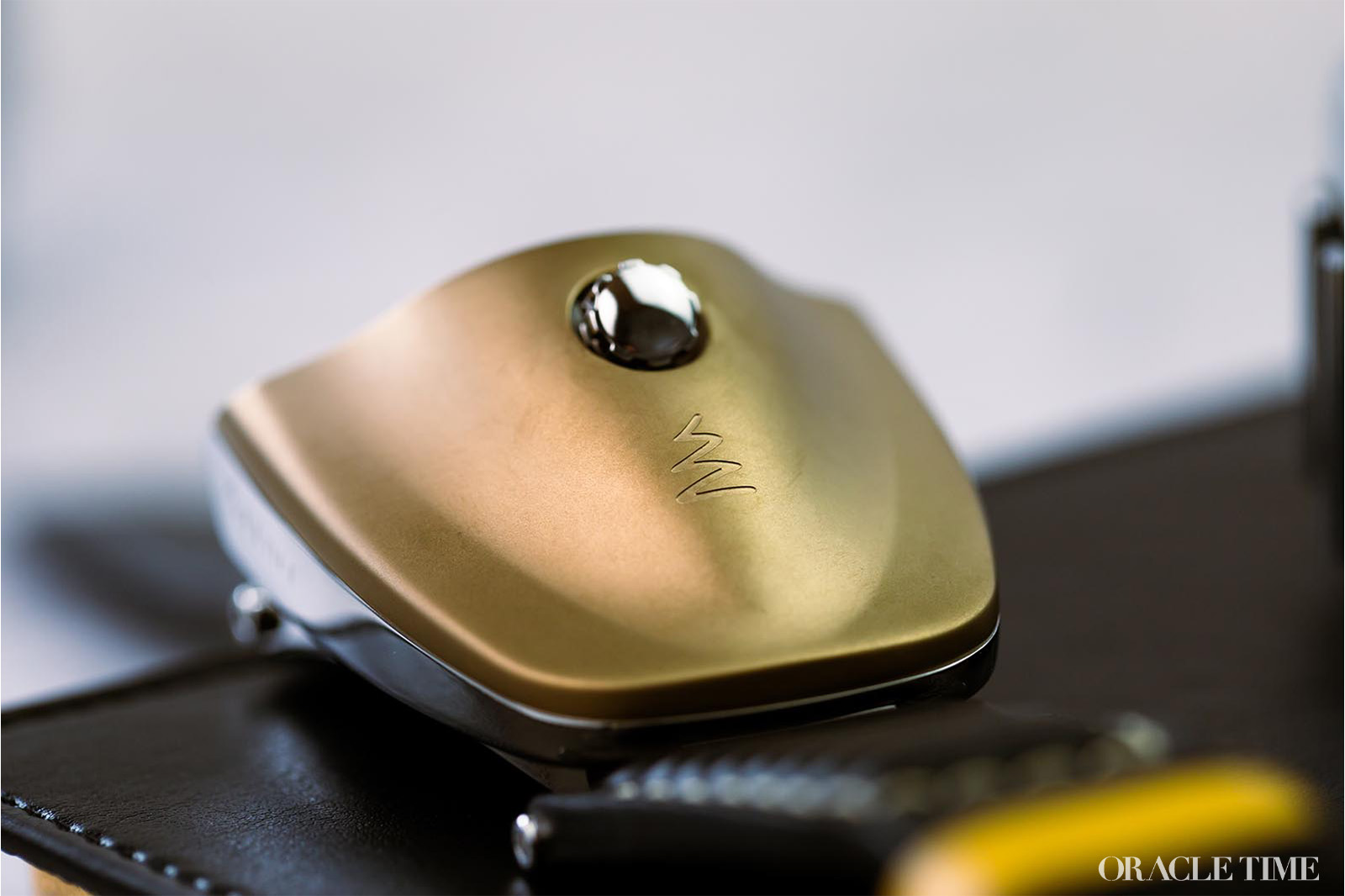 Now, there are some slight issues. First off, yes, it’s massive and feels it. It’s not really the weight, it’s more the sheer dimensions and you’ll have to accept that there’s a good chance you’ll catch it on corners now and then and likely mark the PVD coating. Steel would be the safest of the colour options, even if the pale gold we have here is far better looking than it has any right to be. 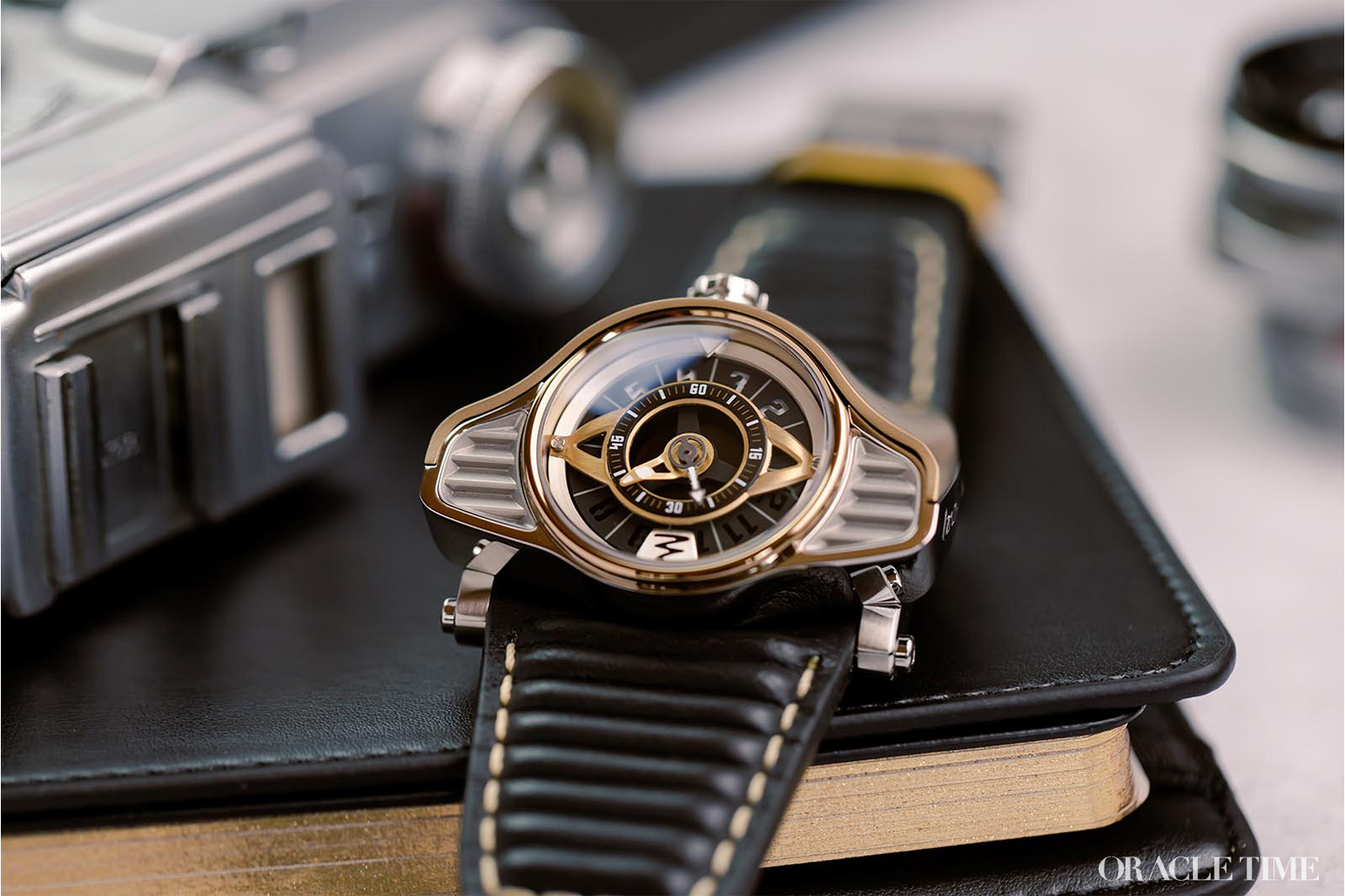 Then there’s the dial. Despite being inspired by the clear, legible speedometers of a Mini Cooper, it feels far too small for the watch. The layout and skeletonization work against it, making it a little awkward at a glance, perfect angle or not. It’s hard not to appreciate the effort and detail that’s gone into the dial; but it’s also harder to read than it should be.

All that said, I had a blast wearing it. It took a bit of getting used to, but it’s surprisingly comfortable on the wrist, and being able to glance at the time while in the blinkered wormhole of writing was satisfyingly useful. 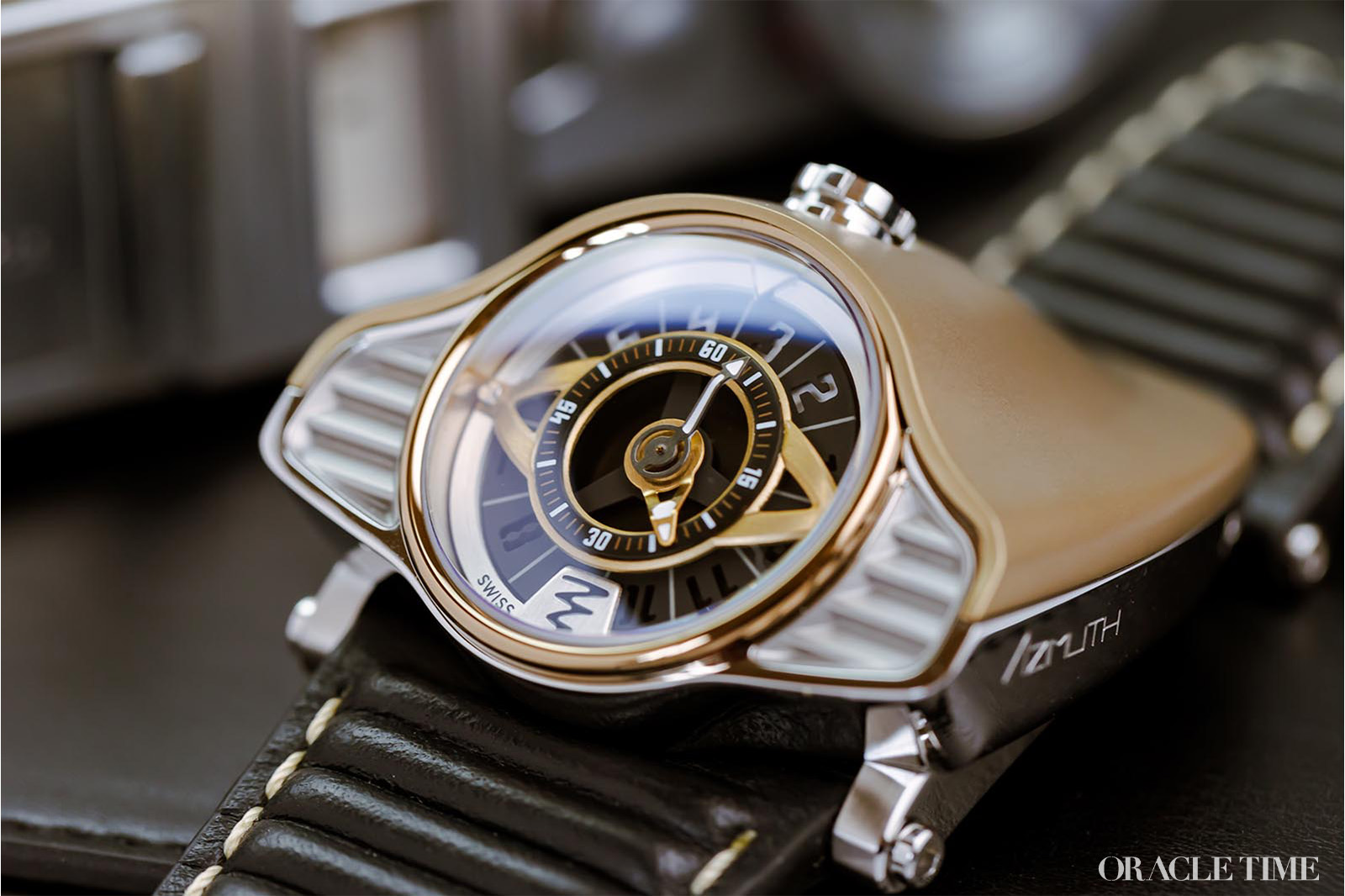 Would I buy it myself? Probably not, but then I’m the kind of person that only goes to a Concourse of Elegance for the champagne, so I’m not really the audience here. At CHF 4,850 though, it’s hard to knock the value here. The time, effort and mechanical flair lavished on the Azimuth Gran Turismo blow many a similarly priced automotive-inspired watch out the water. And honestly, if you like it, you won’t find anything else quite like it.