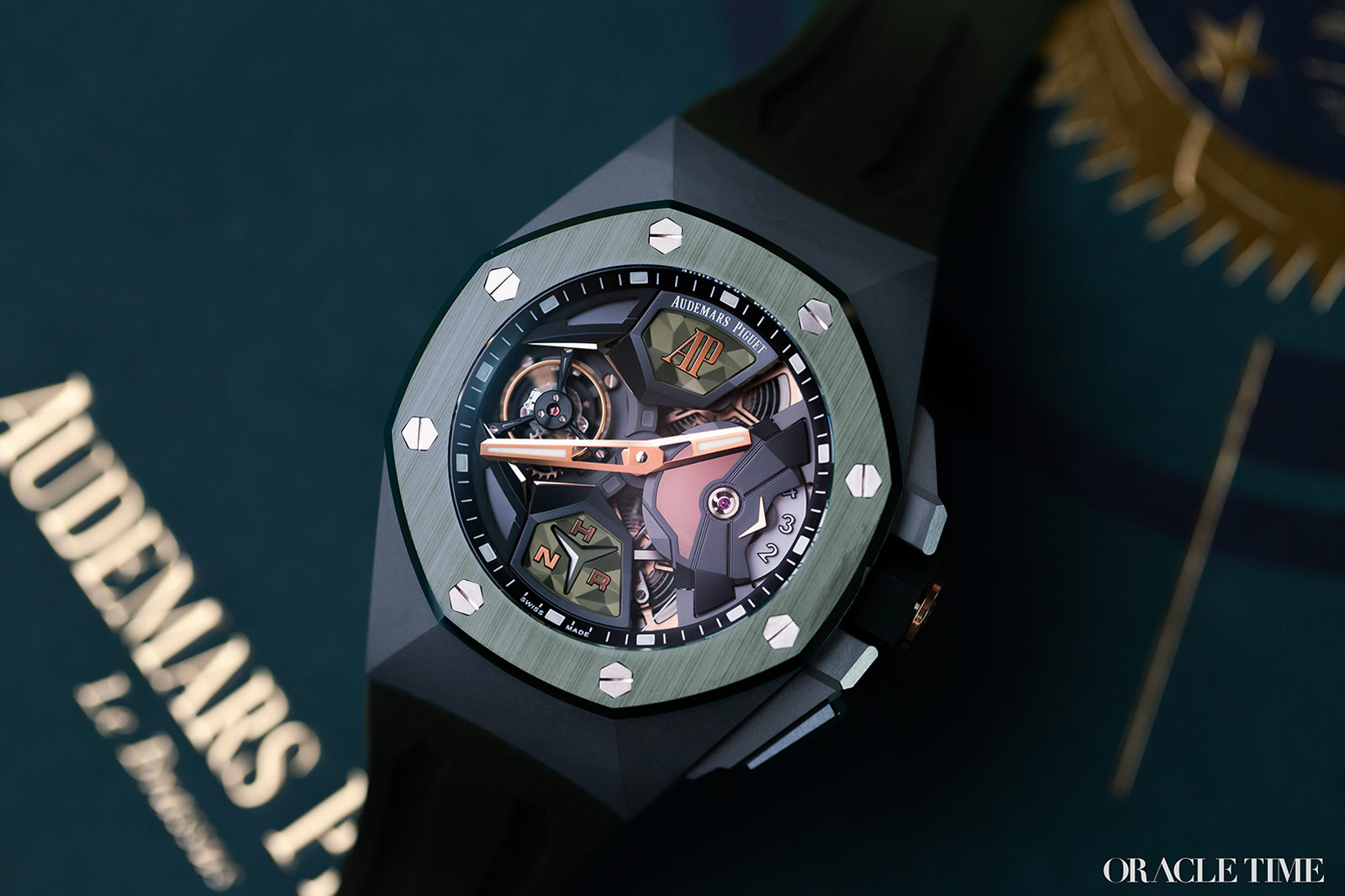 Audemars Piguet’s celebration of the Royal Oak’s 50th anniversary has continued with a series of Royal Oak novelties, including the Perpetual Calendar Blue Ceramic and this, the Royal Oak Concept Flying Tourbillon GMT Green. It’s a reinterpretation of the 2018 watch (itself based on a 2011 model) of the same name, well, not exactly the same name because the original wasn’t green.

What makes the new edition interesting is the dark green ceramic bezel and matching CVD inserts. The forest green tone complements the naturally dark tint of the titanium case, making for a watch that feels sombre and tactical – much at odds the toy-like blue perpetual calendar that’s also on my desk. The reason I say the Concept Flying Tourbillon GMT Green looks tactical is because the multiple shades of green on the inserts at 12 o’clock and 6 give the impression of a camo pattern. 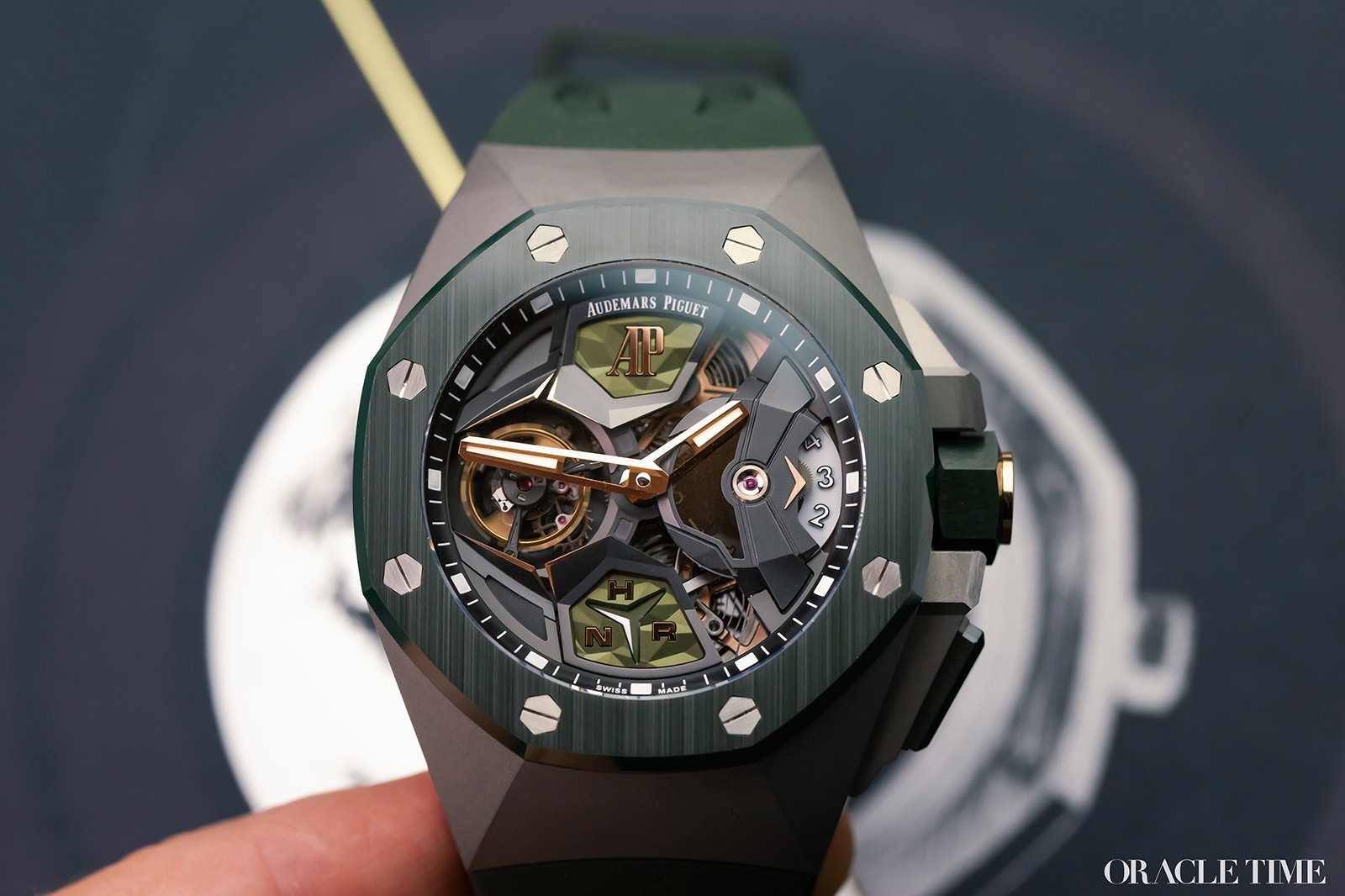 What exactly are these inserts I keep mentioning? Well, the one at 12 o’clock is simple, it’s where the Audemars Piguet monogram is displayed. However, at 6 o’clock things are a little more complicated. It serves as a crown position indicator with the letters H, N and R separated by a turbine shaped window. A white marker points to one of the letters with each letter representing one of the three crown positions, H is for time-setting, N is for neutral and R is for winding. 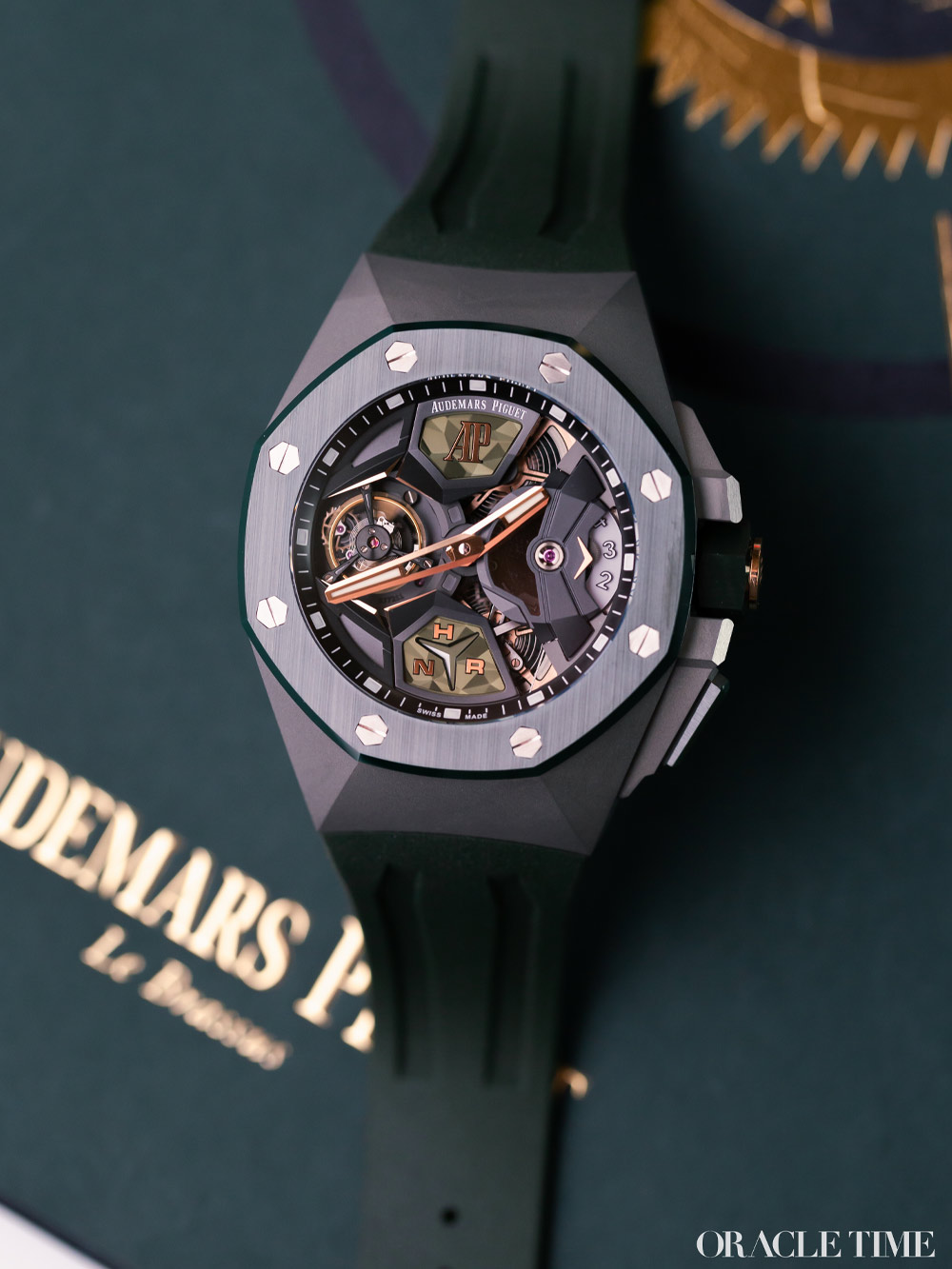 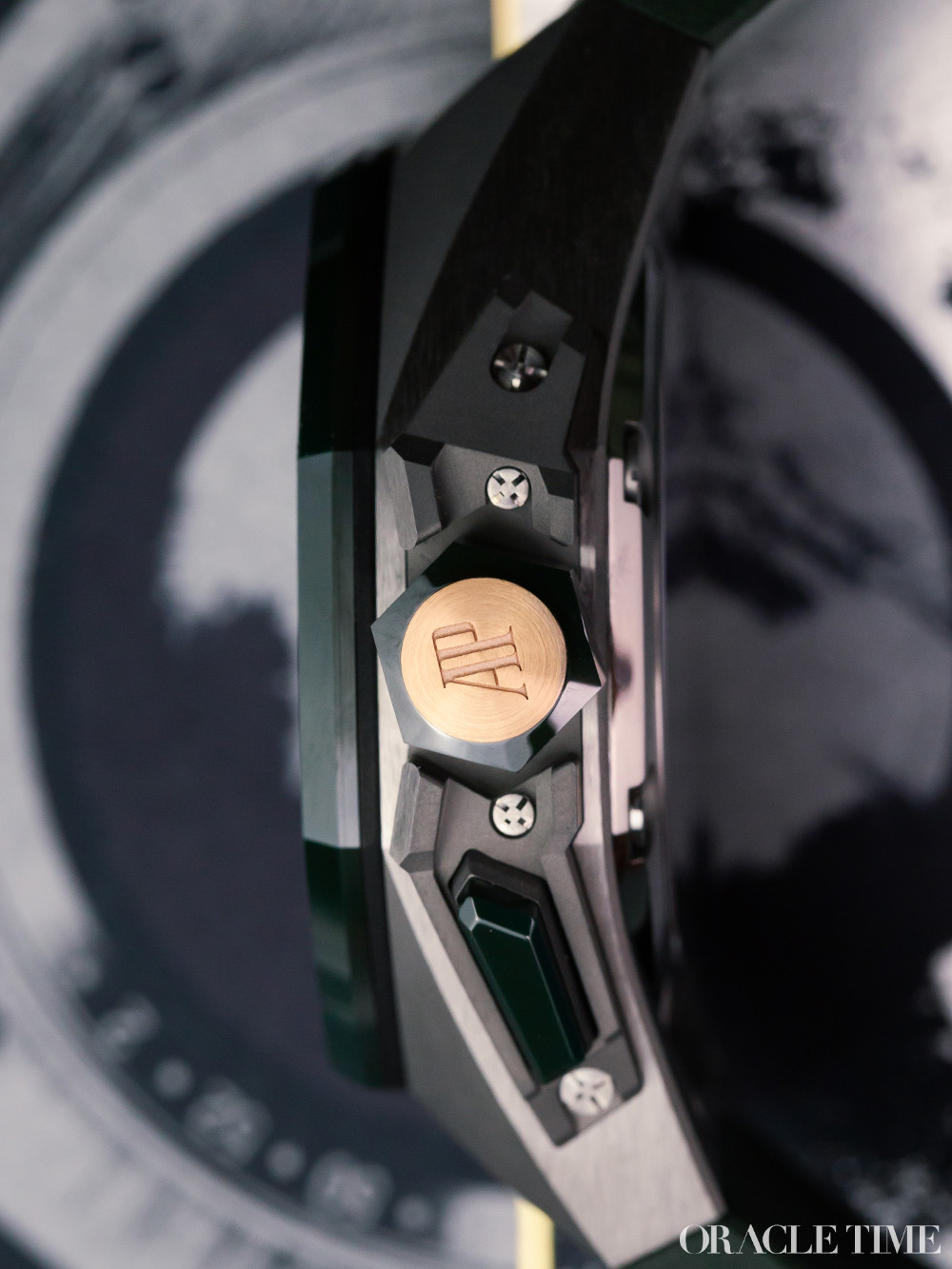 Putting the watch on, I appreciate that the rubber strap is also green, I think if you had the watch on the alternative black strap, you’d start to lose too much of the colour. As it stands, even with the green strap, the colour has been used sparingly across the piece. Only the bezel, strap, crown, pusher buttons and small portions of the dial offer any solid amounts of colour. And that’s despite having a skeletonised display with plenty of surfaces ready to be coloured. This is a watch that shows subtle colours can be far more impactful than garish ones, I’m a fan. 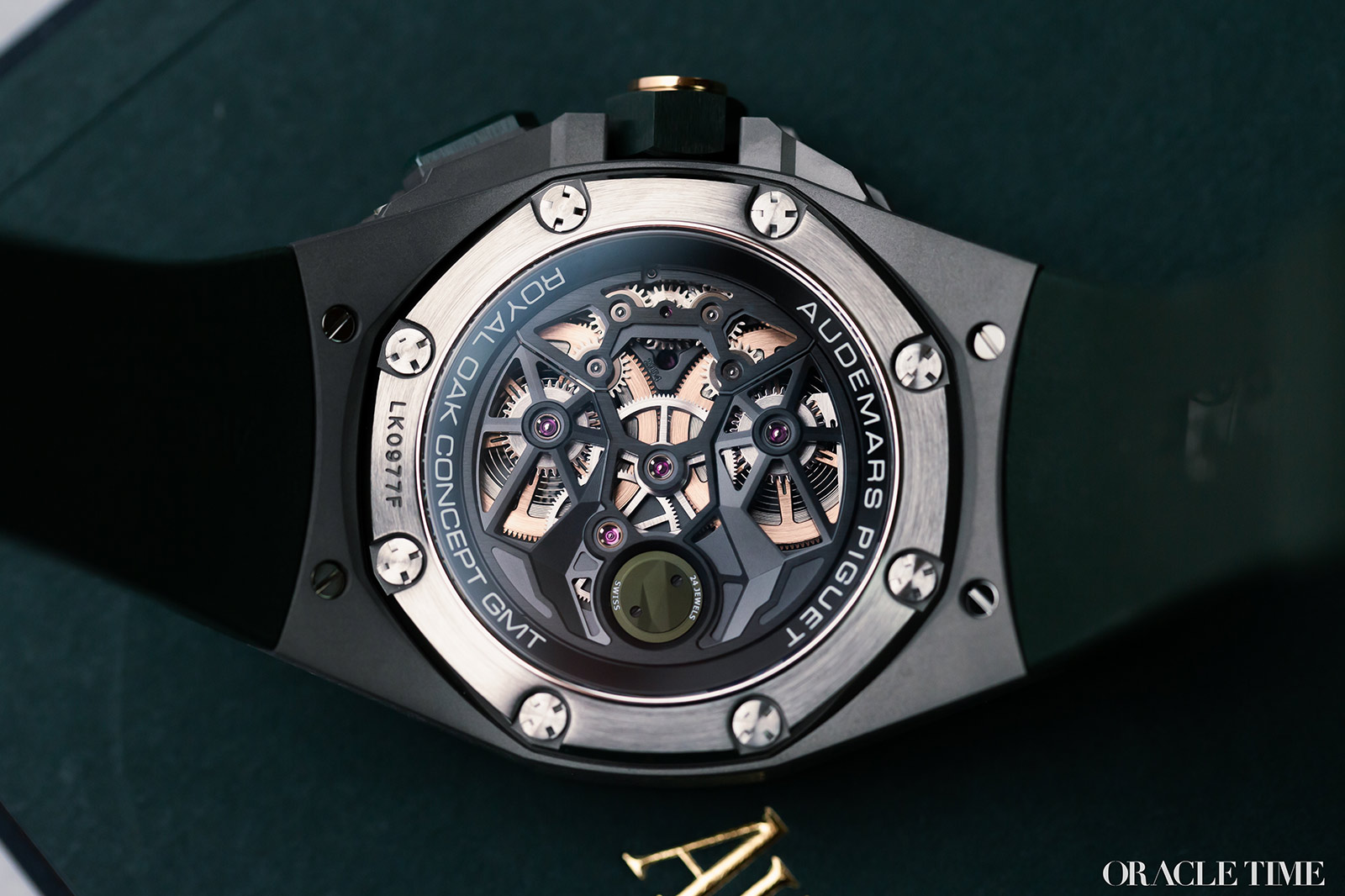 The rest of the watch is pretty much the same as the 2018 Royal Oak Concept Flying Tourbillon GMT with a 44mm diameter case housing the manual Calibre 2954. While you might think that being a manual movement means you’ll have to wind it every day, you’d be mistaken as it has a 10-day power reserve. Plus, there’s the small matter of the flying tourbillon. 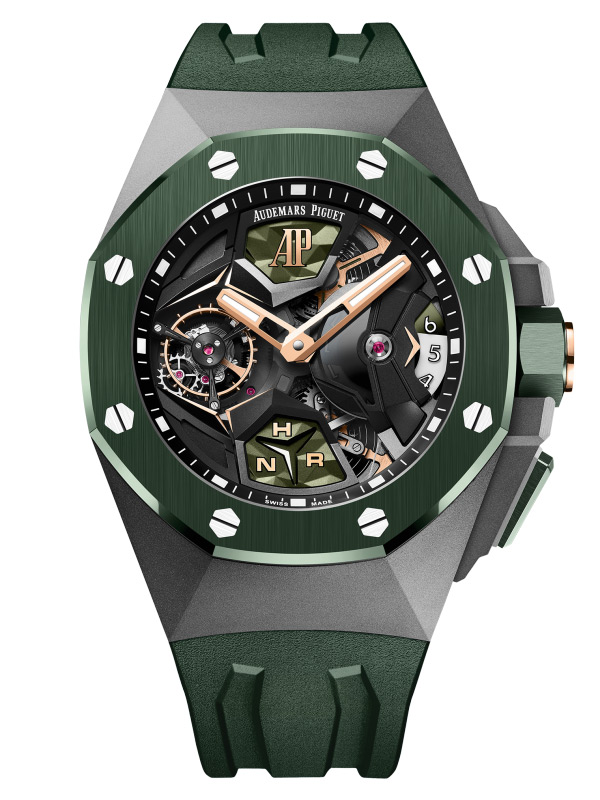 While many Royal Oaks feature high end movements, the concept collection has always been pretty spectacular since it debuted in 2002. In fact, that means the Royal Oak Concept Flying Tourbillon GMT Green is celebrating a double anniversary, 50 years of the Royal Oak and 20 years of the Concept. However, the price is as high as the watch is impressive at CHF 198,900 (approx. £180,000). Although that’s still less than half the going price for the highly publicised and controversial Royal Oak Concept Flying Tourbillon, the Black Panther.