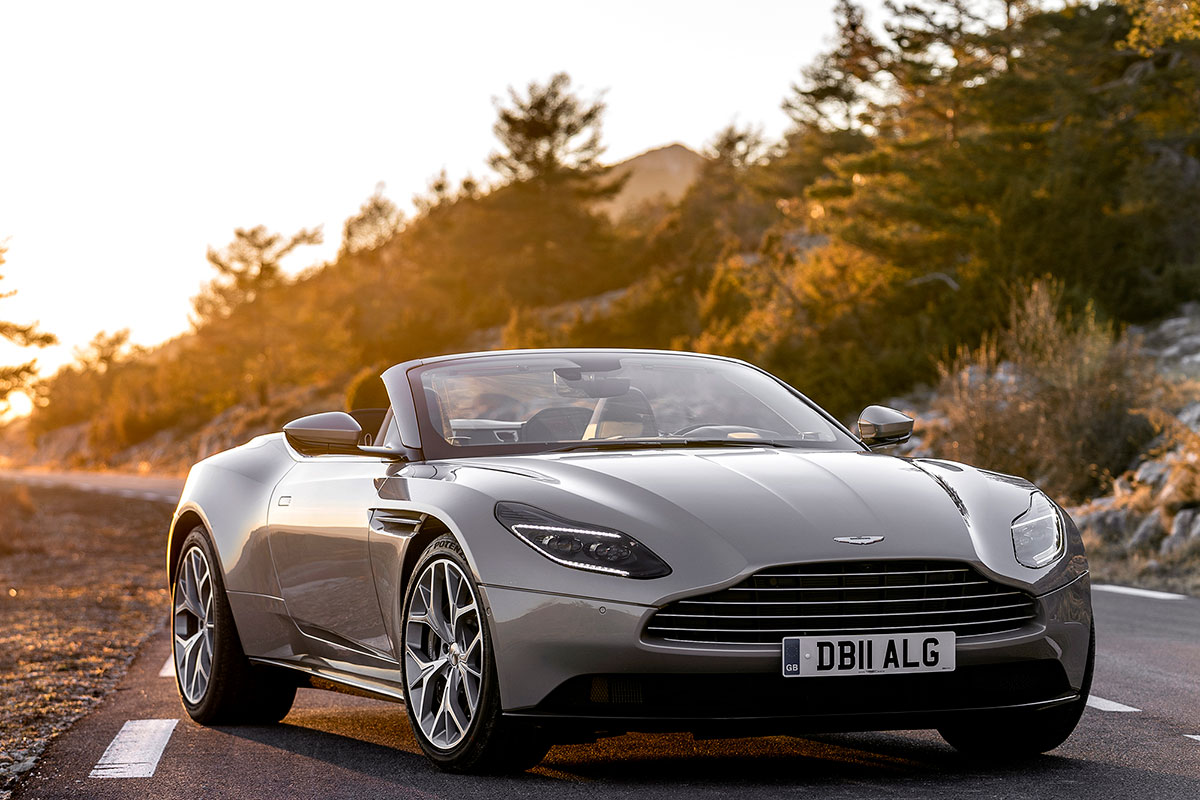 In many respects, the new Aston Martin Volante out-classes its coupé sibling. Don’t get us wrong, the DB11 is a pretty impressive machine in every way, but by replacing the glasshouse with a svelte 8-layer hood, the convertible looks slightly less fussy and even more svelte. It’s also, shall we say, a rather more exciting driving experience thanks to the ability to fold back the heavily insulated hood and drink in the weather, the fresh air and the undeniably urgent sounds of Aston’s twin-turbocharged V8.

That’s if the weather plays ball. The hood – available in a variety of hues – will cosset you completely from the outside world, a helpful characteristic on an unseasonably chilly February drive along the French Riviera, where snow is dusting the higher passes. When the rain and sleet finally disperse, it’s possible to drop the top without even stopping at speeds of up to 50km/h in just 14 seconds (or 16 seconds to close it, when the heavens open up again), so you can make the most of these rare windows of opportunity. 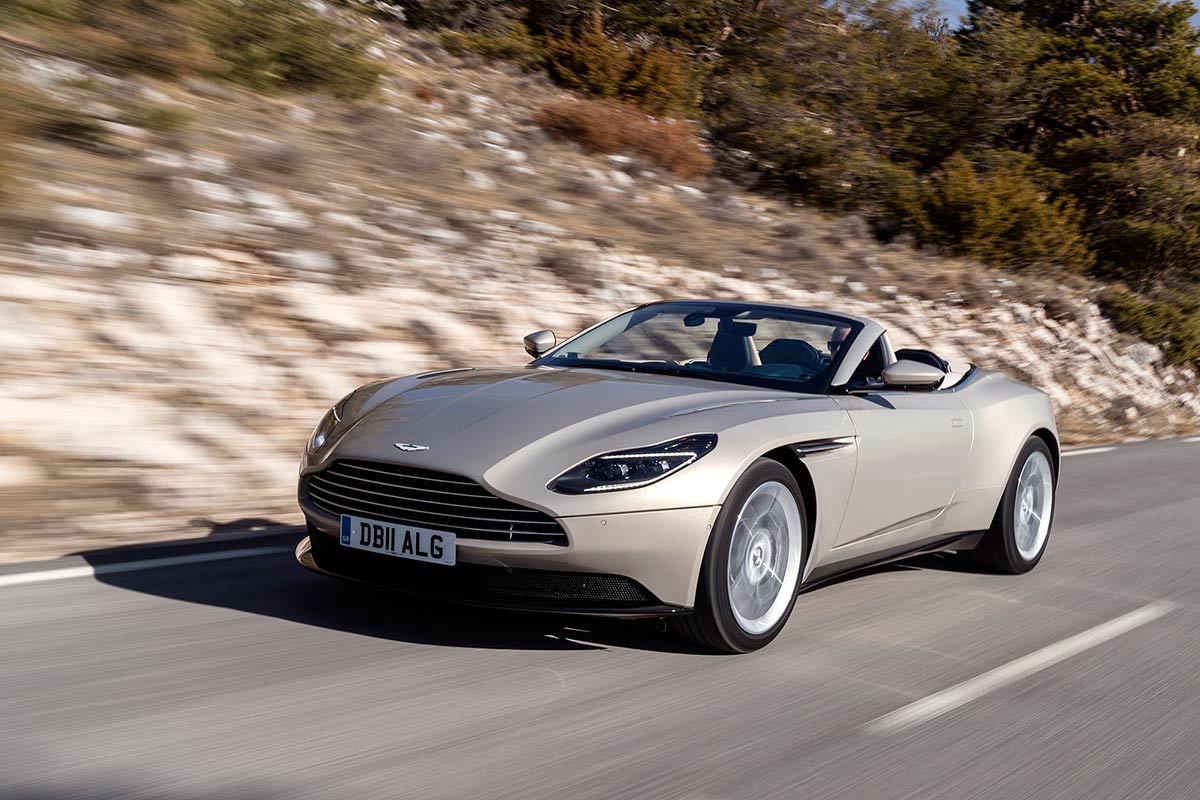 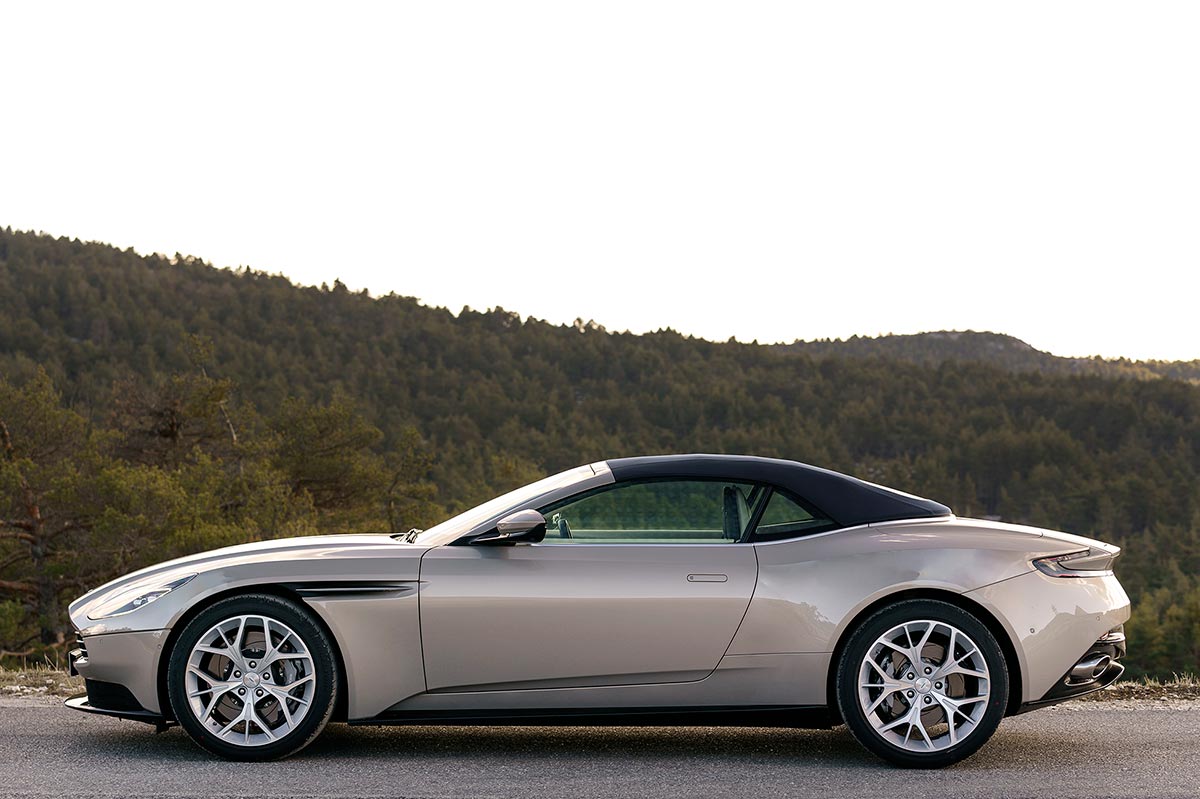 The drizzle also gave us a chance to savour the interior. Buyers are getting plenty of practicality – the boot size has greatly increased over the old DB9 Volante and the rear seats, while still dainty, are more child-friendly than ever before. Naturally, there’s the pure tactile pleasure of a hand-crafted Aston interior, where every surface has been fussed over by exceptionally talented people. Practically every option is open for you to make your own mark on colour and trim, should you so desire.

The DB11 Volante is a very handsome car. It’s also substantial, long and broad, with curvaceous bodywork that just seems to go on and on. There’s also a lot more of it, thanks to the long rear clamshell deck that conceals the hood, but as ever the design team at Aston Martin, led by Marek Reichman and Miles Nurnberger, have put in the hours to ensure every last millimetre is accounted for. Open cars have always been important to Aston Martin, a company that can trace its origins back over a century. In those days, a sports car meant an open car and hefty leather and sheepskin driver’s coats, heavy hats and thick goggles were typical means of weatherproofing, not some high-tech, multi-layered piece of canvas origami. 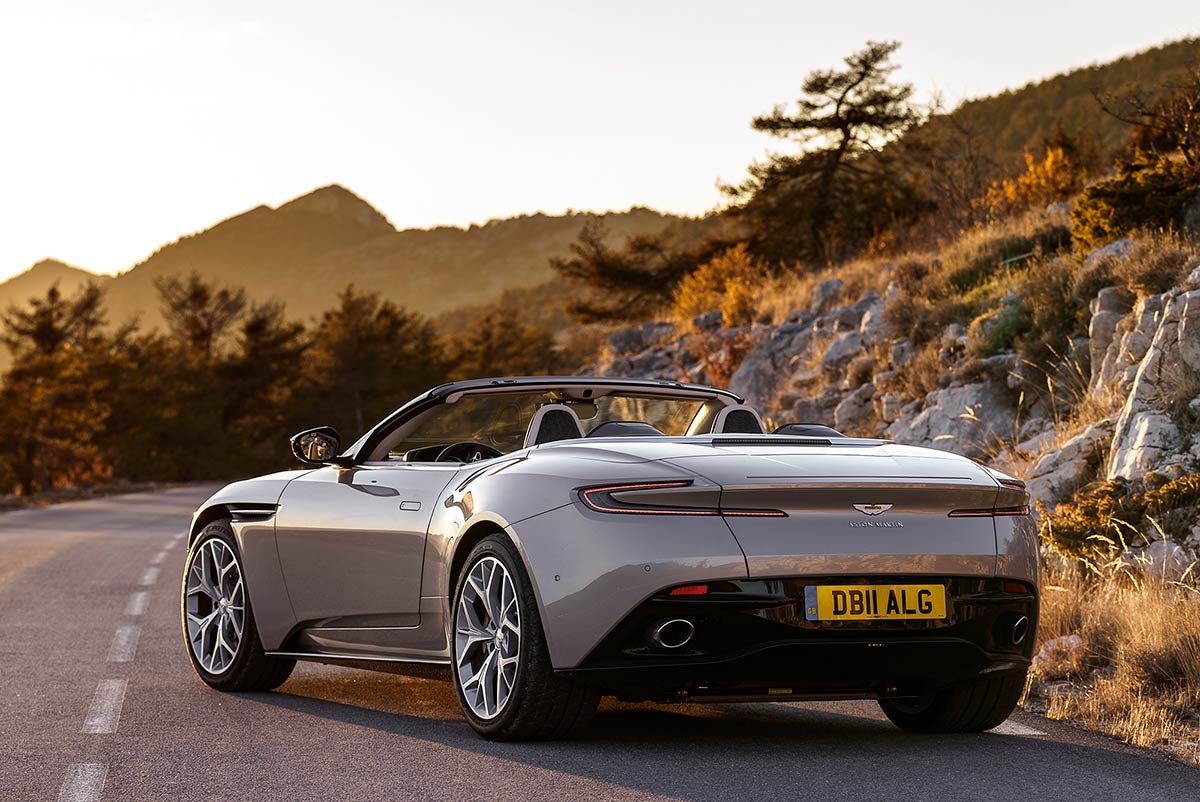 Today, all open-topped DB cars are given the name ‘Volante,’ but it wasn’t until the awkwardly titled Short Chassis Volante in 1965 that this iconic title was first used. ‘Volante’ is Italian for flying, and what better word to describe the sensation of driving, roof-down, in a powerful sports car. The Short Chassis Volante was made from left over bits of the outgoing DB5 and debuted alongside the DB6. A dedicated DB6 Volante, including a handful of high-powered Vantage Volante examples, followed. There were also Volante versions of the brutish V8 Vantage, the ultimate front-engined 70s supercar, and its successor, the Virage. The car that succeeded that, the DB7 of 1994, brought Aston in the modern age and became the best-selling AM to date. Naturally, there was a Volante variant from 1996 onwards. DB7 would be followed by DB9, which was followed in turn by DB11 (the DB8 name was never assigned, and DB10 was reserved for a certain famous fictional Aston Martin owner). 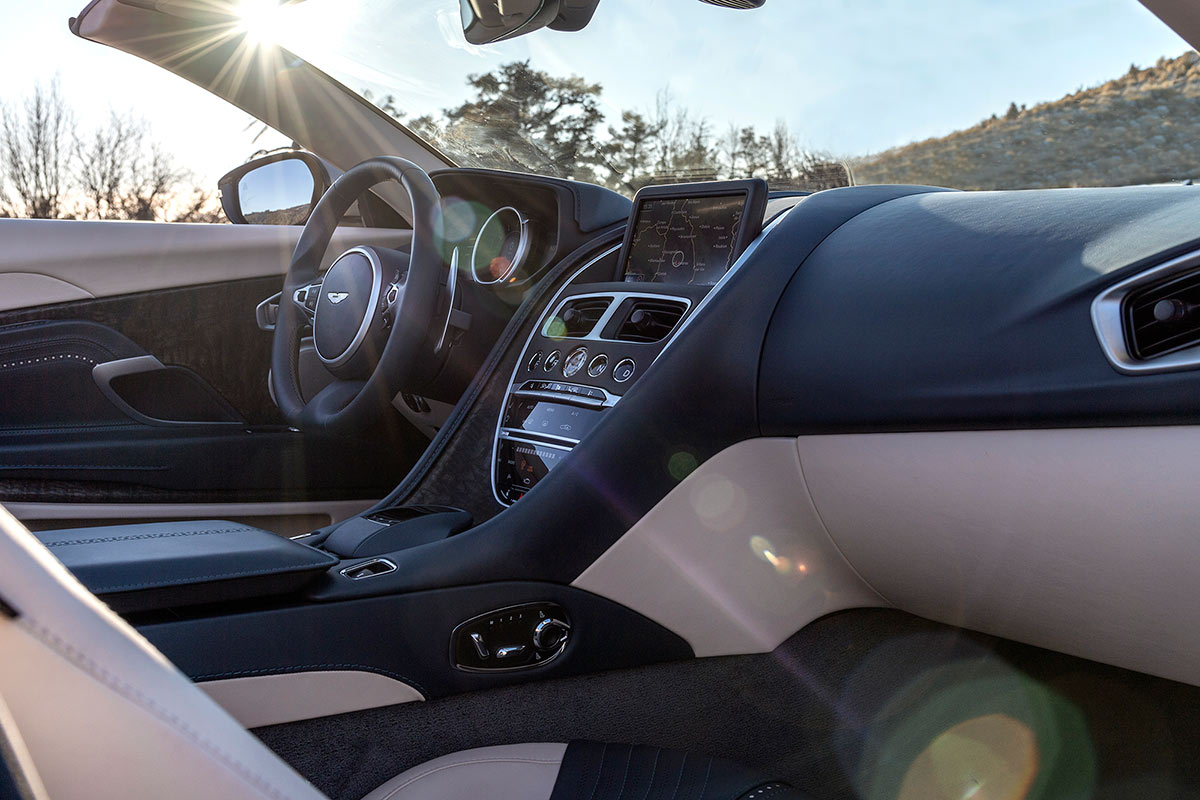 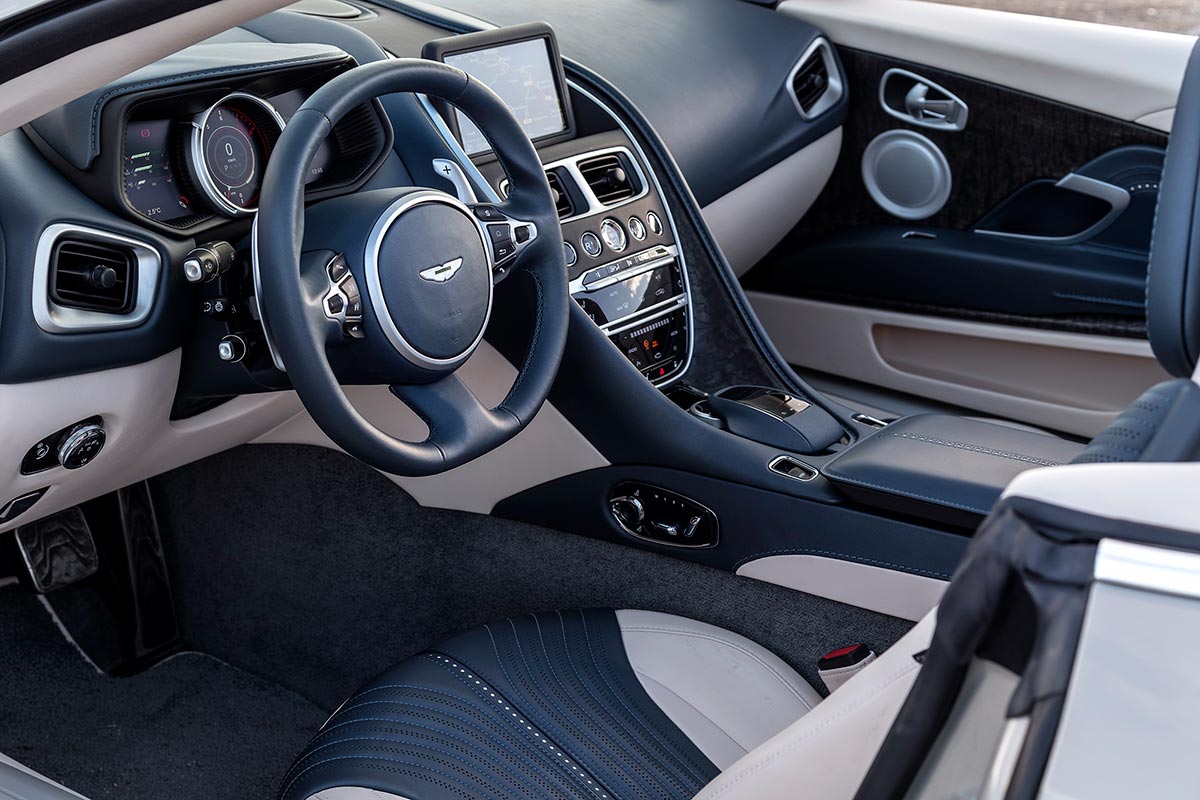 Throughout this evolution, the Volante name has stayed constant, and the convertible grand touring Aston Martin has maintained its reputation as one of the most elegant and graceful machine in the product portfolio. A convertible is a very particular engineering challenge, as well as a design one. For a start, there’s the need to accommodate the weight and complexity of a folding mechanism that needs to work like clockwork time and time again, then there’s the need to balance out that weight while maintaining a suitably stiff body-shell so that handling isn’t compromised. Finally, all this must be accommodated within the parameters set out by the car’s physical form. Nurnberger describes endless back and forth between departments, shaving the physical form of the car by almost imperceptible degrees just to meet the company’s high aesthetic and engineering expectations. 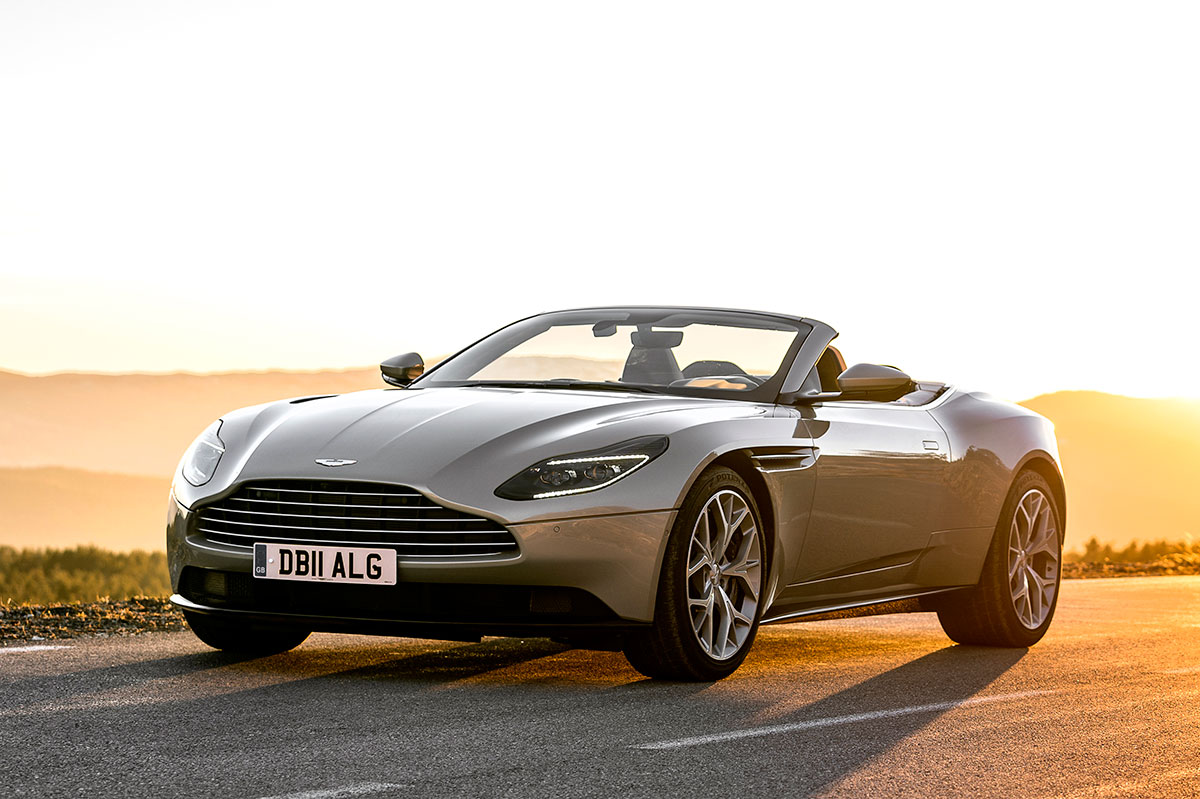 All this beauty is nothing without performance and the DB11 Volante is a terrific sports car, with all of the languid, powerful charm of its closed-top siblings. Behind the wheel with the hood up you’d be hard-pressed to tell that this is a drop-top. It’s a car for cruising at speed, for opening up to experience the surrounding world (and, occasionally, revel in the furious sound coming from the tailpipes), and for tackling those rare twisty roads so beloved by photographers and directors of car commercials. The DB11 Volante gives you license to hunt down these mystical places and make them your own, evoking the spirit of the past as you do so. Whatever the weather, this car is a location hunter’s dream.