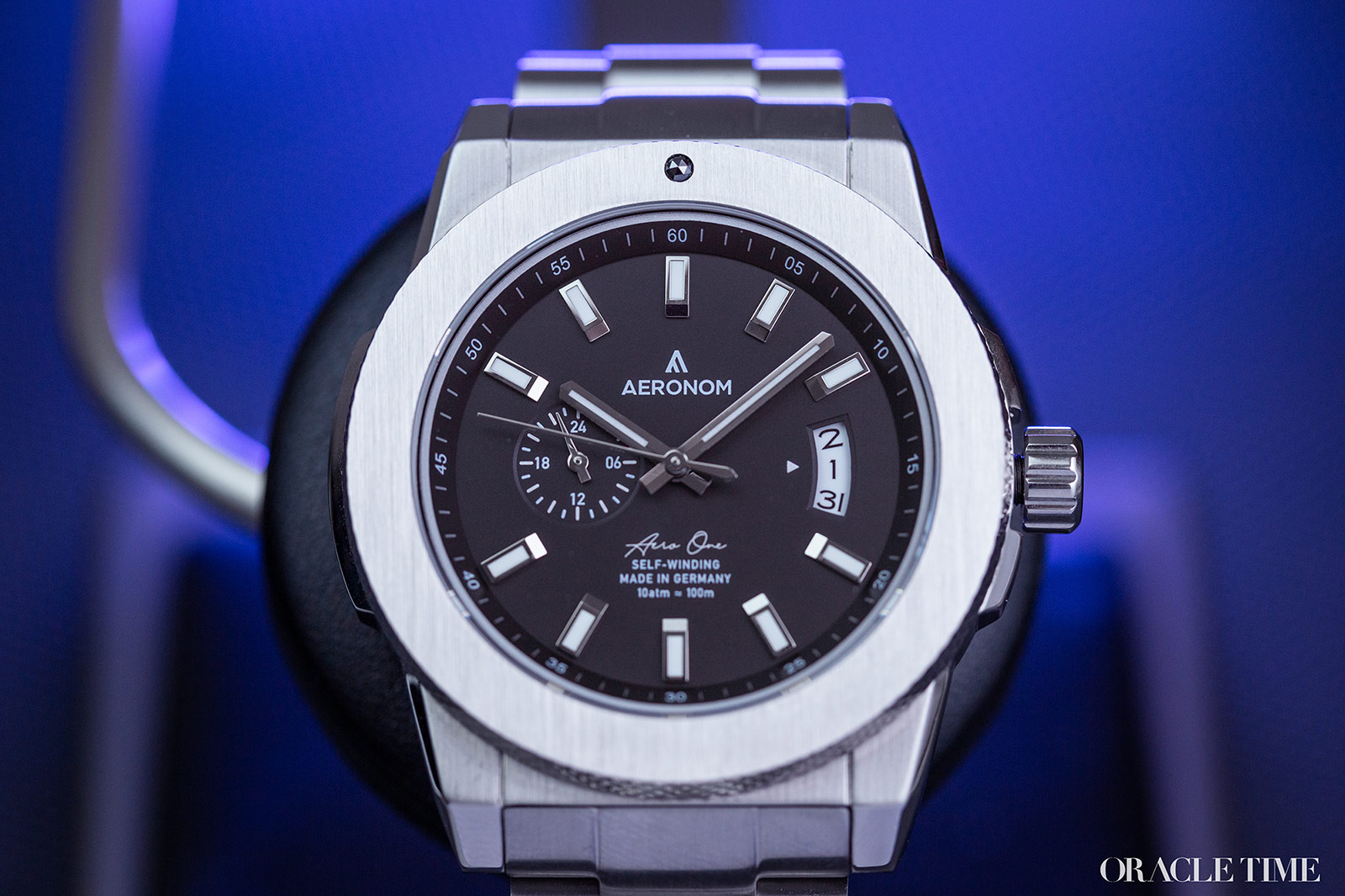 With their big, bold shapes and uncompromising designs, there are a handful of brands out there that have become de facto street watches. You know the ones I mean: Richard Mille, Hublot, those king of brash, unapologetic watches that are all the coolest because of it. They also tend to be pretty damn pricey. Sometimes, that’s part of the point – but who says you can’t get that same street aesthetic on a budget? Enter German watch brand Aeronom and their debut timepiece, the Aero One. 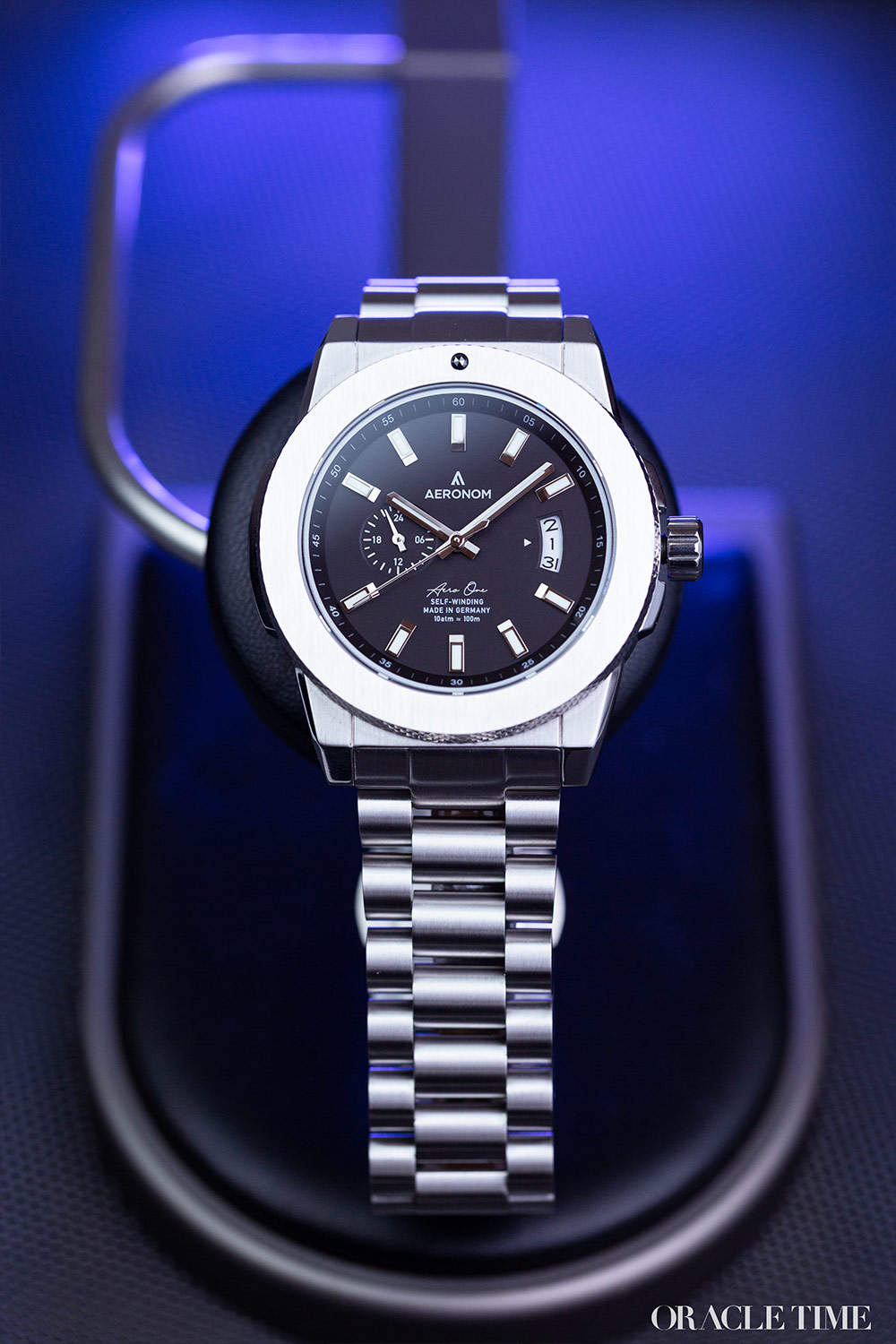 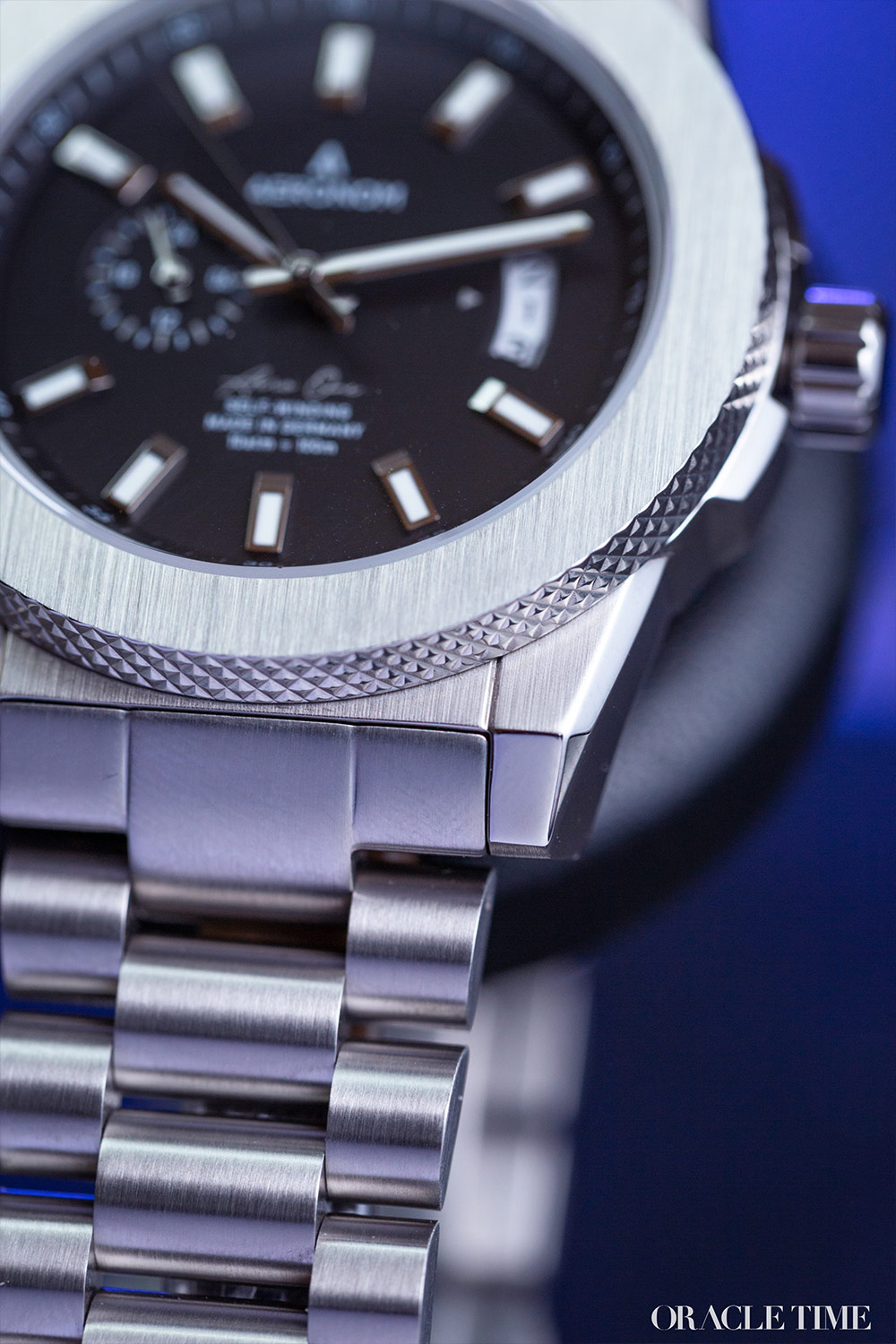 Knurling on the side of the bezel adds grip and that quintessentially automotive swagger, while the open date window also has something of a dashboard to it, even if the rest of the dial is more suited to the ocean depths than the track. The 24-hour subdial (not a second time zone) at nine is an off-kilter touch, though it’s the mirror image or the Big Bang’s three o’clock.

The dial is dark grey rather than black and while that might seem a small difference, it makes for a less stark contrast with the indexes that I for one much prefer to look at. It still lets the applied, lumed indexes stand out perfectly, in colour and shape.

That said, it is a bit more restrained than its inspirations. The specs sheet might say it’s big, but it felt right on my significantly less-than-big wrists. It’s not too high either, so it fits under most sleeves without too much effort. I’m not saying it’s a dress watch, just that it works well as a versatile daily wearer. 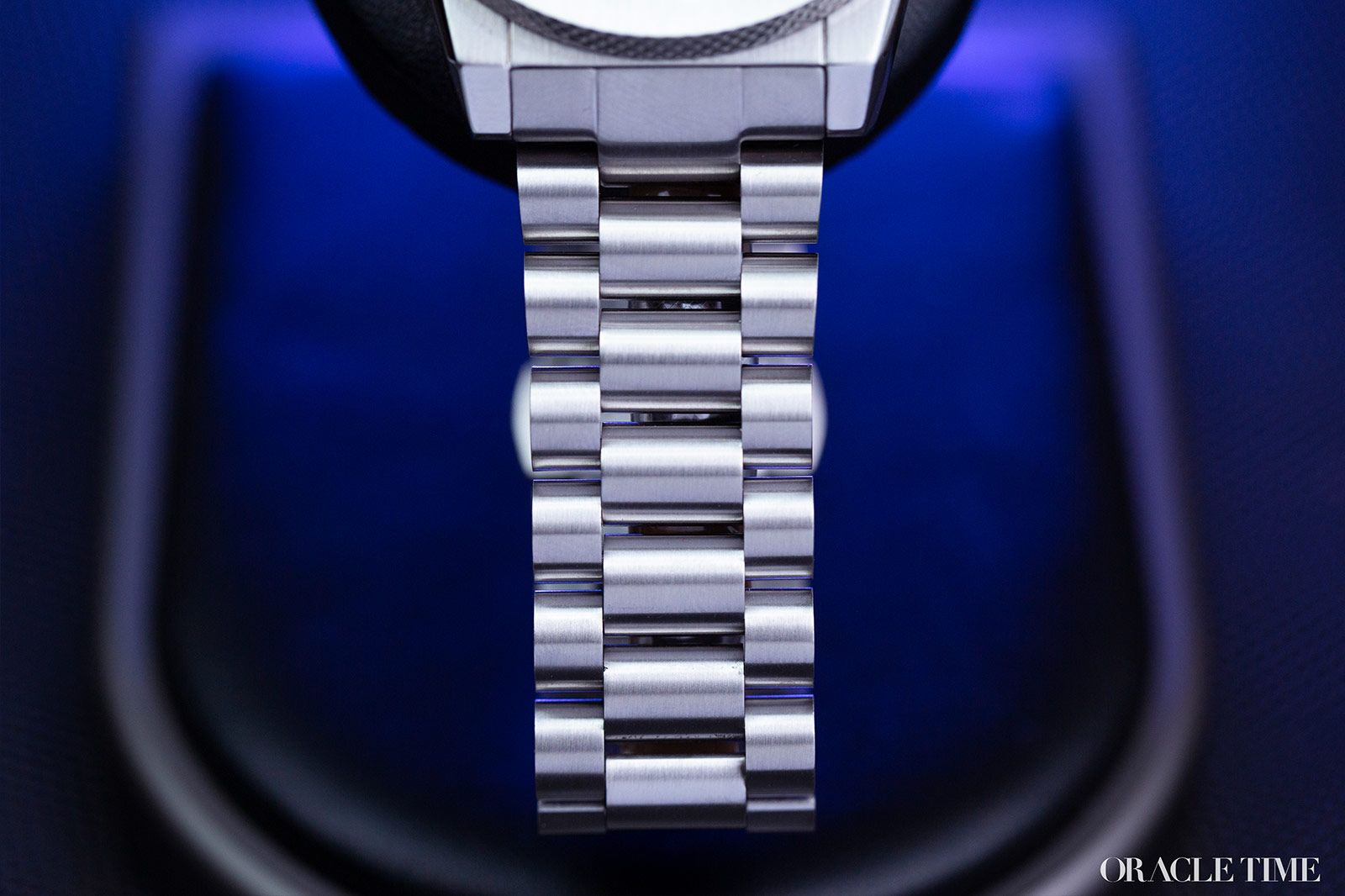 As a self-professed ‘street diver’, it has the street part of that cornered. Less so the diver part. The 100m water resistance is one thing. It’s not great for professional standard but good enough for a watch that’s not pretending to be professional. The bezel however is another matter.

It’s unidirectionally rotating of course, but it has no markers other than a black diamond at 12 o’clock. It’s a cool finish above water, but there’s no way you’d be able to read it under. It’s just not fit for purpose. Plus, it’s actually quite sharp – and I don’t mean well dressed.

Inside the Aeronom Aero One is the Miyota 8217 calibre automatic movement, a workhorse if ever there was one. Its respectable 42-hour power reserve and accuracy are regulated in Germany for an extra layer of assurance, though as anyone that’s had one of these before, they’re pretty damn reliable. 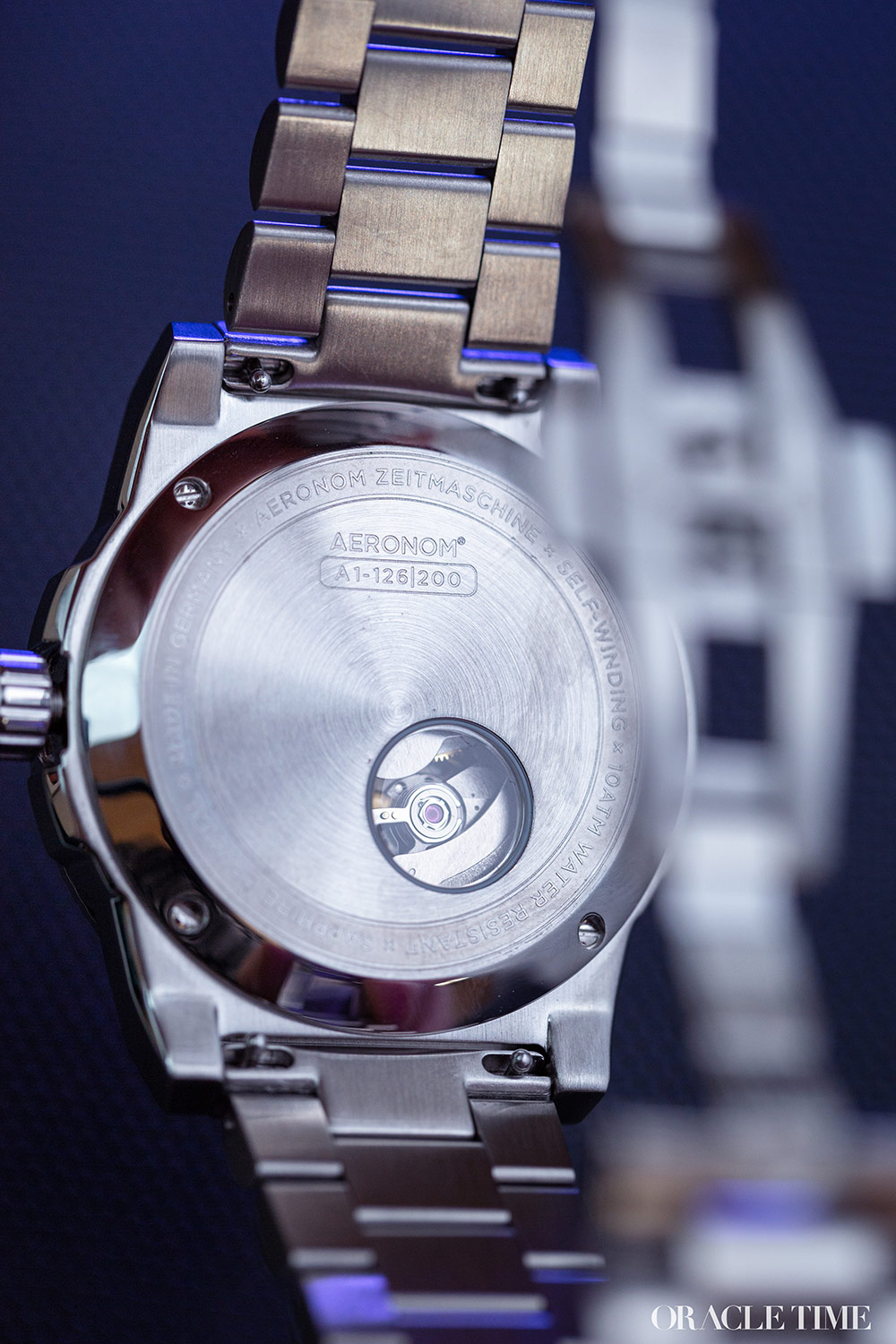 The caseback is a bit of a mystery to me. A solid caseback would hammer home the Aero One’s diving inclinations. A sapphire caseback would show off the movement, if they wanted to finish it nicely. Instead, there’s a window just where the balance wheel sits. It’s just enough to show that it’s a mechanical watch, not enough to show what those mechanics are. It’s odd.

The bottom line however is that the Aero One is €495, or Imperial money, just over £420. Whatever you think about Aeronom’s design choices here, you can’t say they’re not offering a lot of watch for the money. The machining and finishing across the case alone is good for that money. Add in that this is perhaps one of the most faithful alternatives to the Big Bang around and it’s obvious who the brand’s audience is.

The Aeronom Aero One hits its street aesthetic on the head, with a few racing influences for good measure, and at this price it’s a good way to get an uncompromisingly styled watch at a less compromising price.