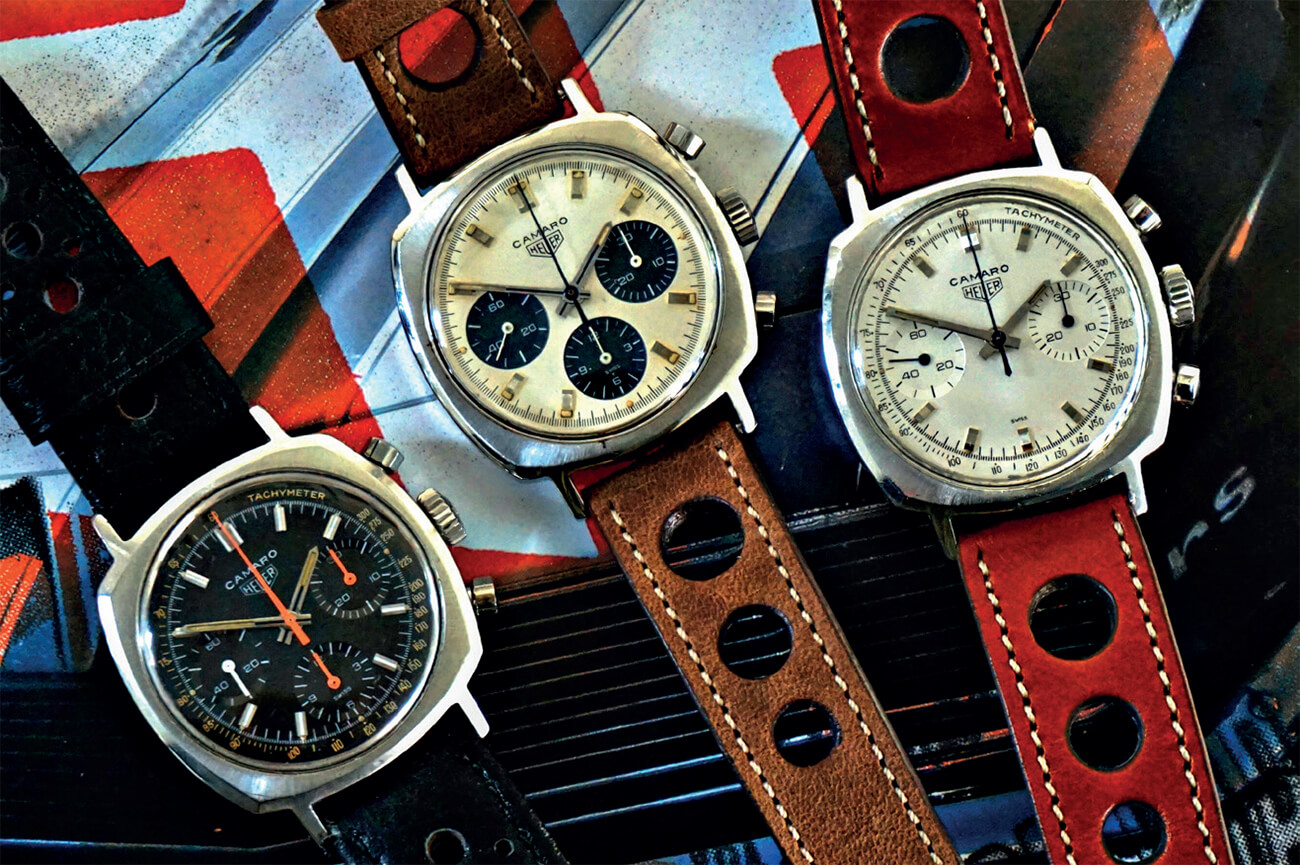 For a first-time buyer, pursuing a vintage watch collection can be an overwhelming task. Often we’re faced with the question, “What is Heuer’s ultimate sleeper watch?” To which the answer is surprisingly simple. The Camaro has long held the crown for Heuer’s best value for money timepiece. Classic and beautiful, yet tremendously overlooked, this late ‘60s treasure is one of 2020’s most significant investment watches.

The worlds of Swiss watchmaking and American muscle cars couldn’t typically be further apart. Yet the Heuer Camaro, in both its name and origin, owes a lot to Chevrolet’s iconic automobile of the same name. Streamlined, dynamic and compact, Chevrolet’s Camaro became an icon of American manufacturing, resonating with an audience of young drivers in the mid-1960s. The name ‘Camaro’ thus became an expression of high value and excellence, becoming inextricably linked to racing culture in the USA with the Camaro Super Sport named the official pace car of the Indianapolis 500 from 1967 to 1969. In his attempt to break into the young American market, Jack Heuer adorned his new watch with the ‘Camaro’ title in 1968. Chevrolet’s star would successfully cast new light on Heuer’s latest release through the prompt wave of press that hit the Swiss brand. 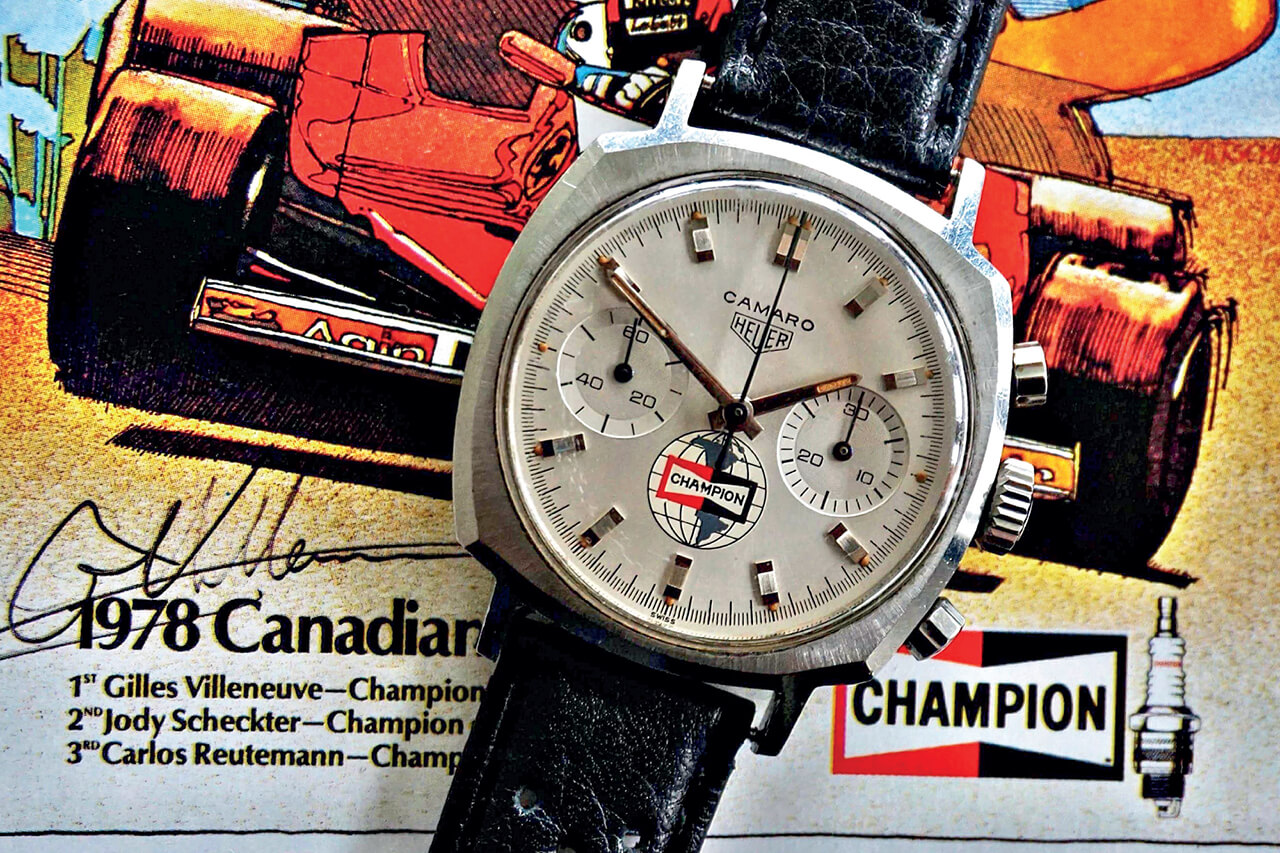 Sharing similar dials, hands and movements, the Camaro had all the simplicity of its predecessor, the Carrera. However the Camaro’s major difference lies in its cushion-shaped case, boasting a polished grind on its concave sides to offer a grittier modern character. Much as the Camaro automobile was Chevrolet’s response to the wildly popular Ford Mustang, the Heuer Camaro offered a dynamic new spin on its elder sister. However, while the Chevy Camaro’s star would continue to rise, the Camaro wristwatch would be discontinued after only four years in 1972, eclipsed by Heuer’s bold new line of automatic chronographs. 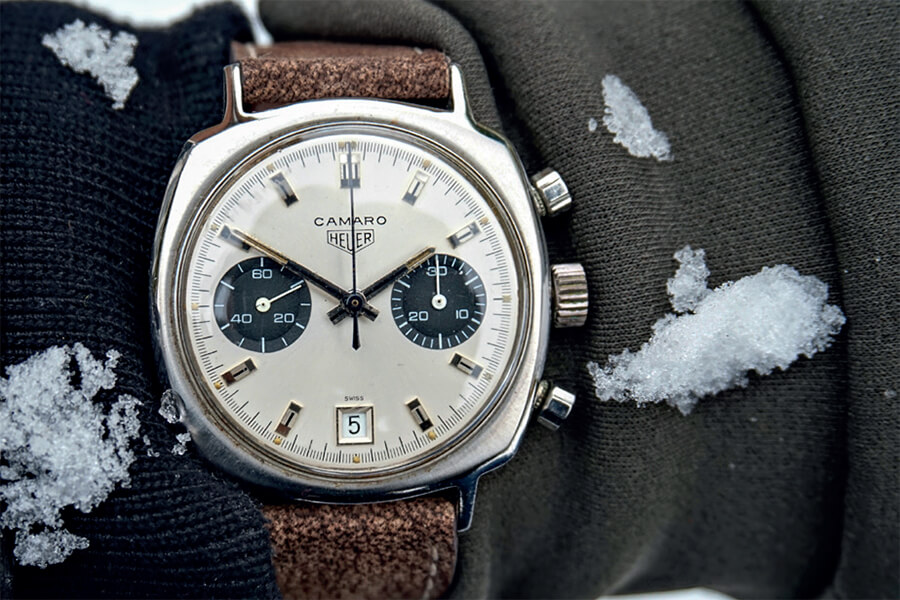 In the shadow of such giants as the Monaco, Carrera and Autavia, the Heuer Camaro’s innovative spirit remains largely overlooked. However as prices for Heuer’s famed trio continue to soar, the Camaro is witnessing a quiet renaissance as the brand’s best value in vintage. Produced in the late ‘60s golden era of legendary sports watches, the early three register Camaro shares its Valjoux 72 movement with the likes of Rolex’s Daytona and the pre-806 Breitling Navitimer. For the serious collector, the Camaro checks all boxes by merit of its specifications alone. Yet for the modern enthusiast, this watch offers a contemporary flare that many vintage pieces do not. Criticisms of the Carrera arise through its modest 36mm diameter – while only 1mm larger, the Camaro’s square shape commands a greater, fleshed out presence on the wrist.

Over the past 20 years, TAG Heuer has routinely celebrated its heritage through the release of many successful re-editions from its historic catalogue. Such newfound exposure has fuelled a thriving market for vintage Heuers, having become serious investment pieces. Only time will tell which TAG Heuer re-edition lies around the corner – perhaps the Camaro may be the last of Heuer’s ‘sleepers’ to ignite the market.