In a new world of the Greta Thunberg effect, travellers have to come face to face now more than ever with their carbon footprint. But why should that mean any less luxury? Use this opportunity to take the slow route, swap planes for trains and step back in time to an opulent world of splendour with Champagne on tap and caviar by the mini-fridge full.

The Orient Express, London to Venice 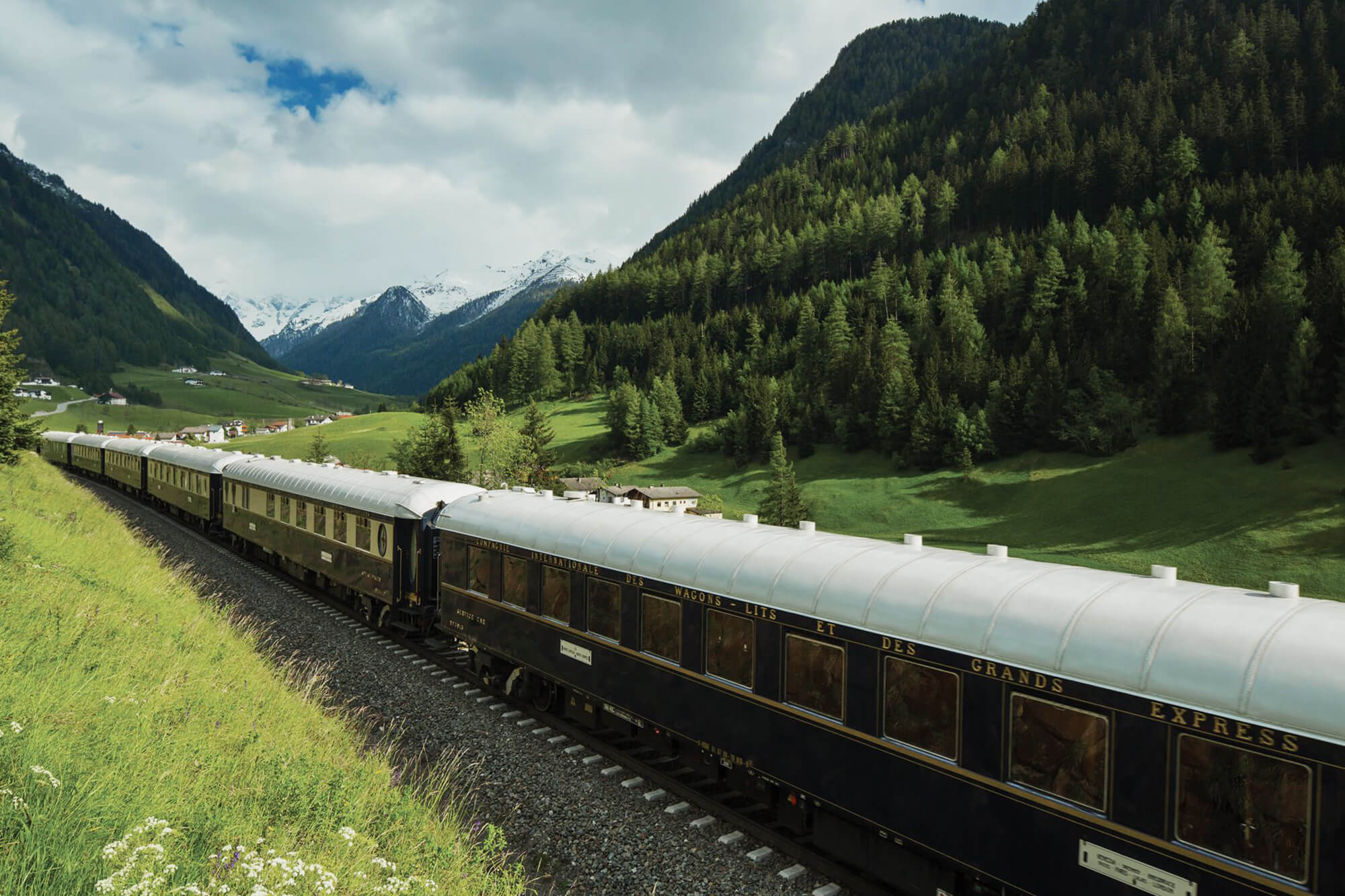 You’ll be greeted by stewards suited in gold livery and white gloves pointing you to your cabin, draped in romance, from French-polished cherry wood to damask sheets and gleaming mahogany panelling. Sweeping past rural French farmlands and Swiss Alpine valleys you’ll dine on foie gras and salt marsh lamb from Mont St Michel, curled up on deep green velvet armchairs, as the best of Europe passes by your window from Venice to Verona.

More details for The Orient Express at Belmond. 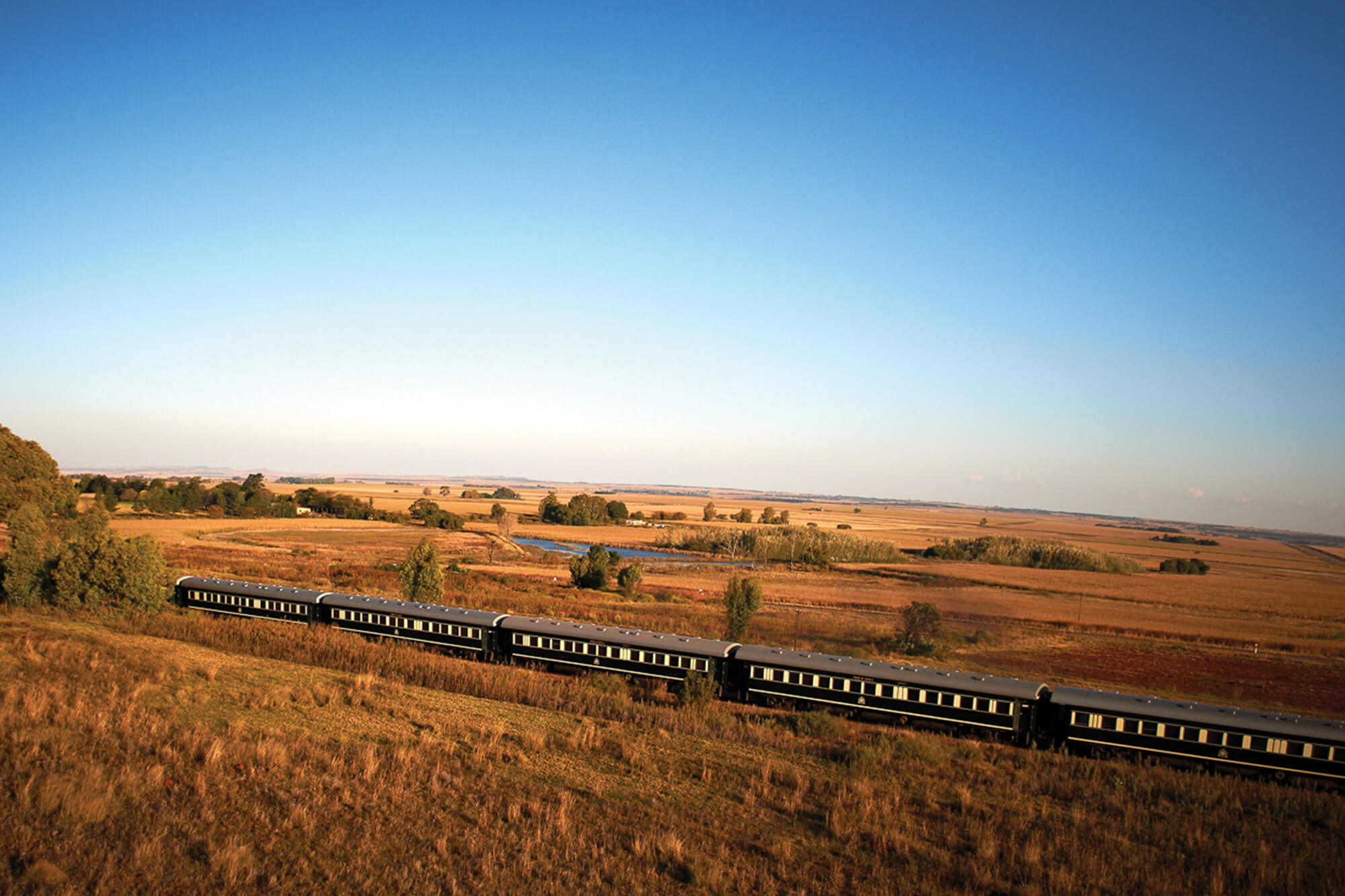 Gawp at jaw-dropping landscapes and wildlife paired with some of South Africa’s finest wines on a mighty 1,000-mile expedition from Pretoria to Cape Town. Journeying through Zimbabwe, Namibia and Tanzania, you’ll glide along the grasslands of Highveld and soar across the desert of Great Karoo wearing a high suction pair of goggles as you battle off the dust from your open-air balcony.

The atmosphere onboard Rovos Rail is sparkling with live string ensembles and a gong setting the tone for each candlelit dinner. Waiters waltz around in navy suits and pocket squares, serving up Cape bobotie in the Edwardian-style dining cars with grand tufted leather chairs and tasselled curtains embroidered with roses. Cosy up in the observation car and spot clans of antelopes and wildebeests as you’re chauffeured through the mystical Cape Winelands passing emerald vineyards and whitewashed Cape Dutch style houses dotted at the base of imposing mountains — a nature lover’s dream. 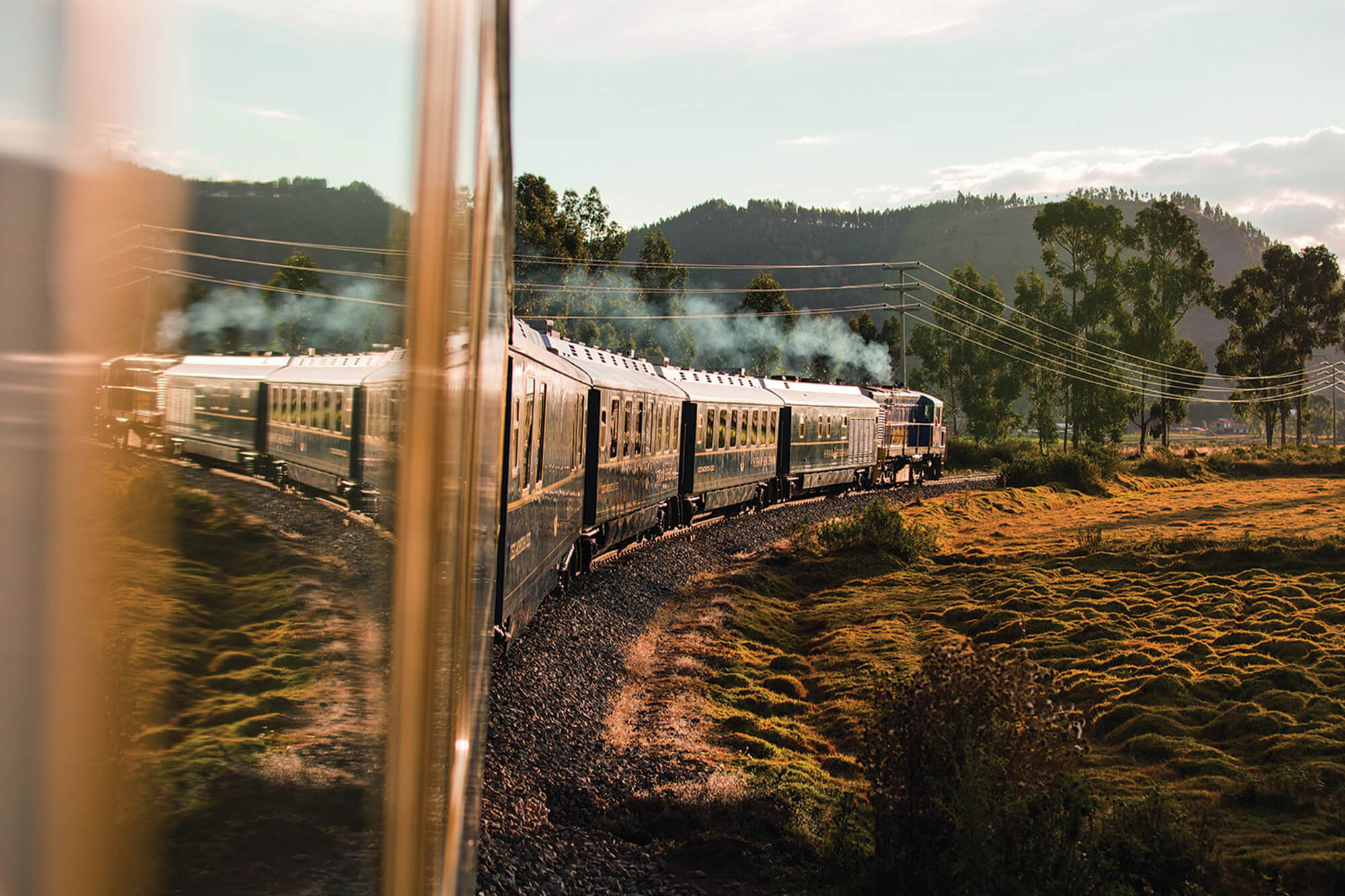 In 1911, notorious American explorer Hiram Bingham rediscovered the lost city of the Incas — nowadays, travellers can take his namesake voyage, chugging between Cusco and Machu Picchu with mighty mountains and bewitching villages setting the backdrop. Soak up the views from the peach-cushioned bar serving Peruvian Piña Coladas as you roll past the rapid Urubamba River and fields of lavender corn on a quest to the heart of the Inca Empire.

Pullman-style carriages are decorated with fine fabrics, antique fittings and nature-inspired motifs while the Observation Car marks the perfect spot to catch the sunrise. Gawk at the breath-taking Sacred Valley and sample Peruvian wine as you pass through the Andes nibbling on pumahuanca salt-crusted trout and Kiwicha caviar. As night draws in, the Hiram Bingham is transformed by Latin beats from its a South American band and Cartavio Solera rum flowing throughout.

More details for The Hiram Bingham at Belmond. 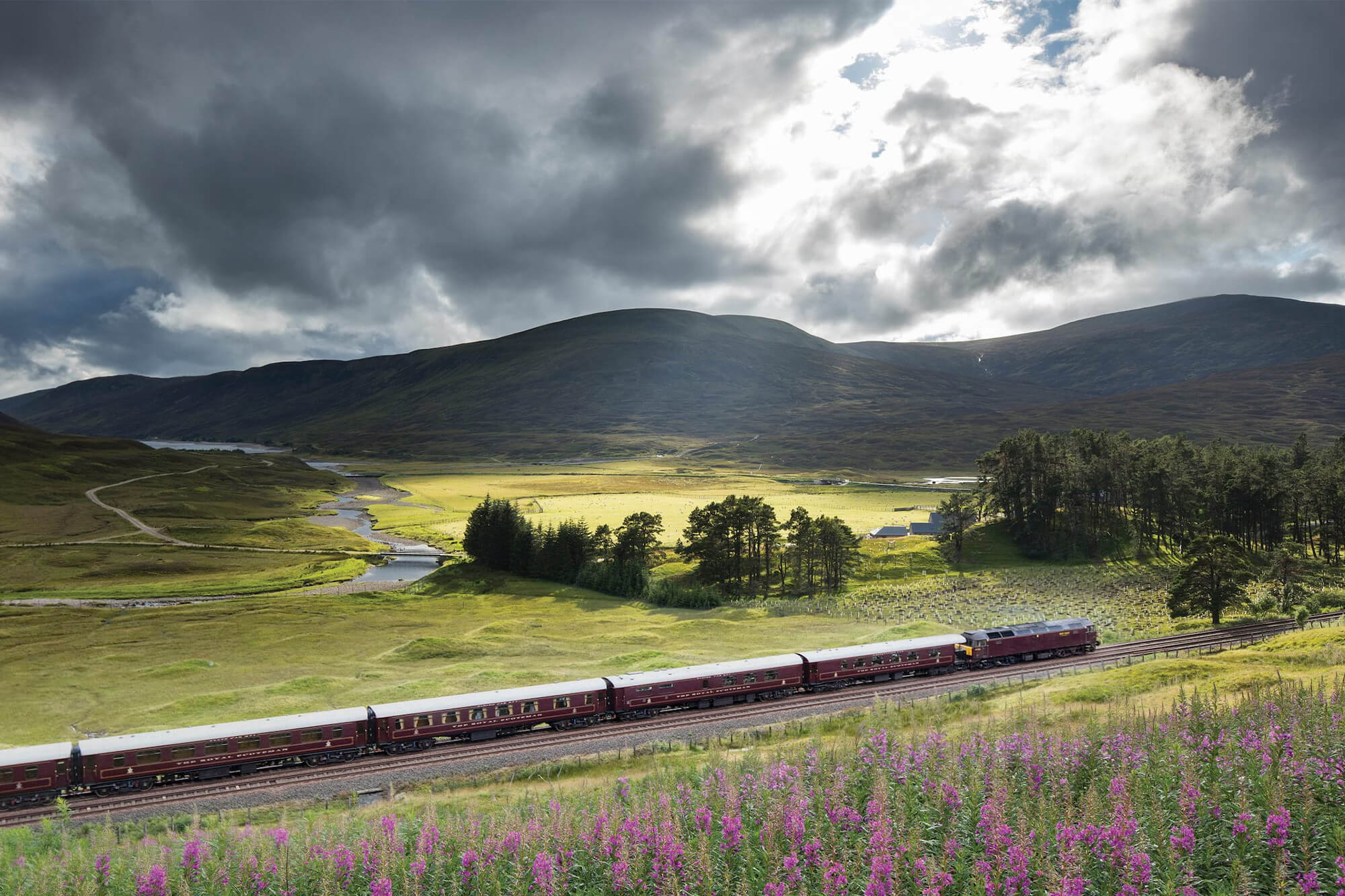 Take the slow route through the rolling green hills of Scotland from Edinburgh to the medieval Highlands, as you explore some of the finest distilleries and retire back on-board to a bar stocked with more than 50 kinds of whisky. You’ll be taken aback by glistening mirror-still lochs and dominant castles as you cosy up in tartan woollen blankets and sip a Scotch with your 35 travel companions in the mahogany-clad dining car.

Lay beside pine-clad mountains as your personal astronomer guides you on a stargazing session and set off on a guided mountain bike tour. More gentle travellers can opt for a massage at the Haybarn spa or head out for a yoga class surrounded by nothing but Scottish red deer and Highland cattle: soaking up the slower pace of life.

More details for The Royal Scotsman at Belmond. 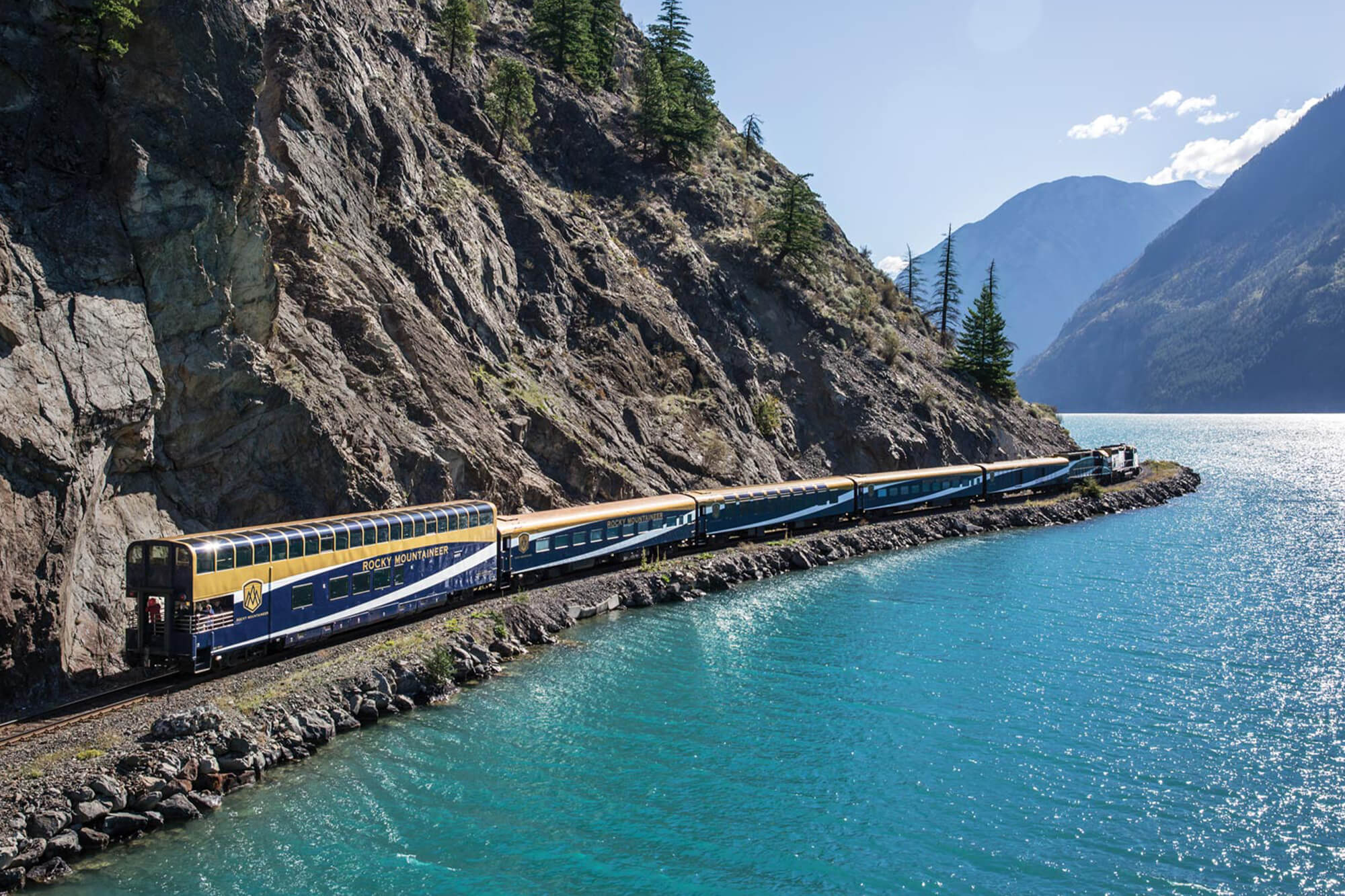 As autumn reds emerge and fresh snow falls on the mountaintops, set off as great pioneers once did and explore Western Canada’s iconic Rocky Mountain landscape and rugged scenery aboard the Rocky Mountaineer. Surfing from Banff to Vancouver, you’ll ride along the Thompson River passing jagged cliffs, glacial runoffs and staggering terrain with some of the most colossal mountains in the continent. Suppose the idea of sleeping onboard doesn’t sit comfortably. In that case, the Rocky Mountaineer is the perfect alternative; offering travellers local hotel stays with portered luggage rather than operating as a sleeper train.

From your panoramic glass-domed coach, you’ll catch glimpses of elk, bighorn sheep and eagles as you sip local mountain beer and snap a shot of the tallest peak in the Rockies — Mount Robson. While onboard, award-winning international chefs prepare dishes like steelhead salmon fillets with smoked sea salt and Alberta beef short ribs braised in Okanagan Valley Merlot. You’ll uncover a treasure trove of jewels from Pyramid Falls to the Fraser Canyon where the gold rush brought more than 10,000 hopefuls over 160 years ago.