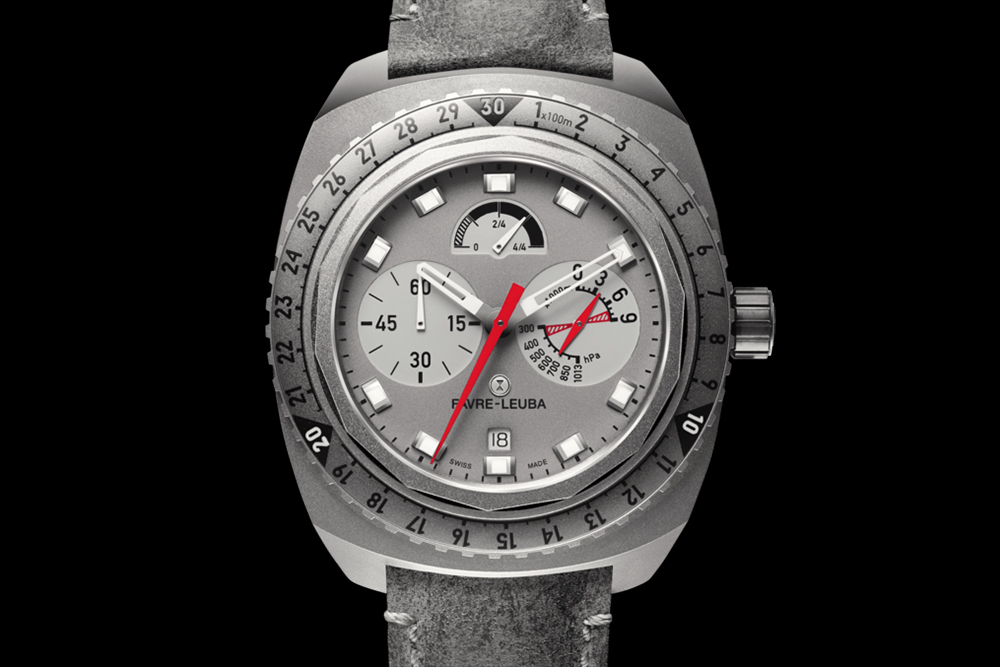 But then, how many diving watch owners spend most of their time exploring sunken wrecks hundreds of metres down? It’s a thought that makes wearing a watch able to indicate heights of up to 9,000m a little less self-effacing. That’s good, because the Bivouac is a watch worth wearing at any point. 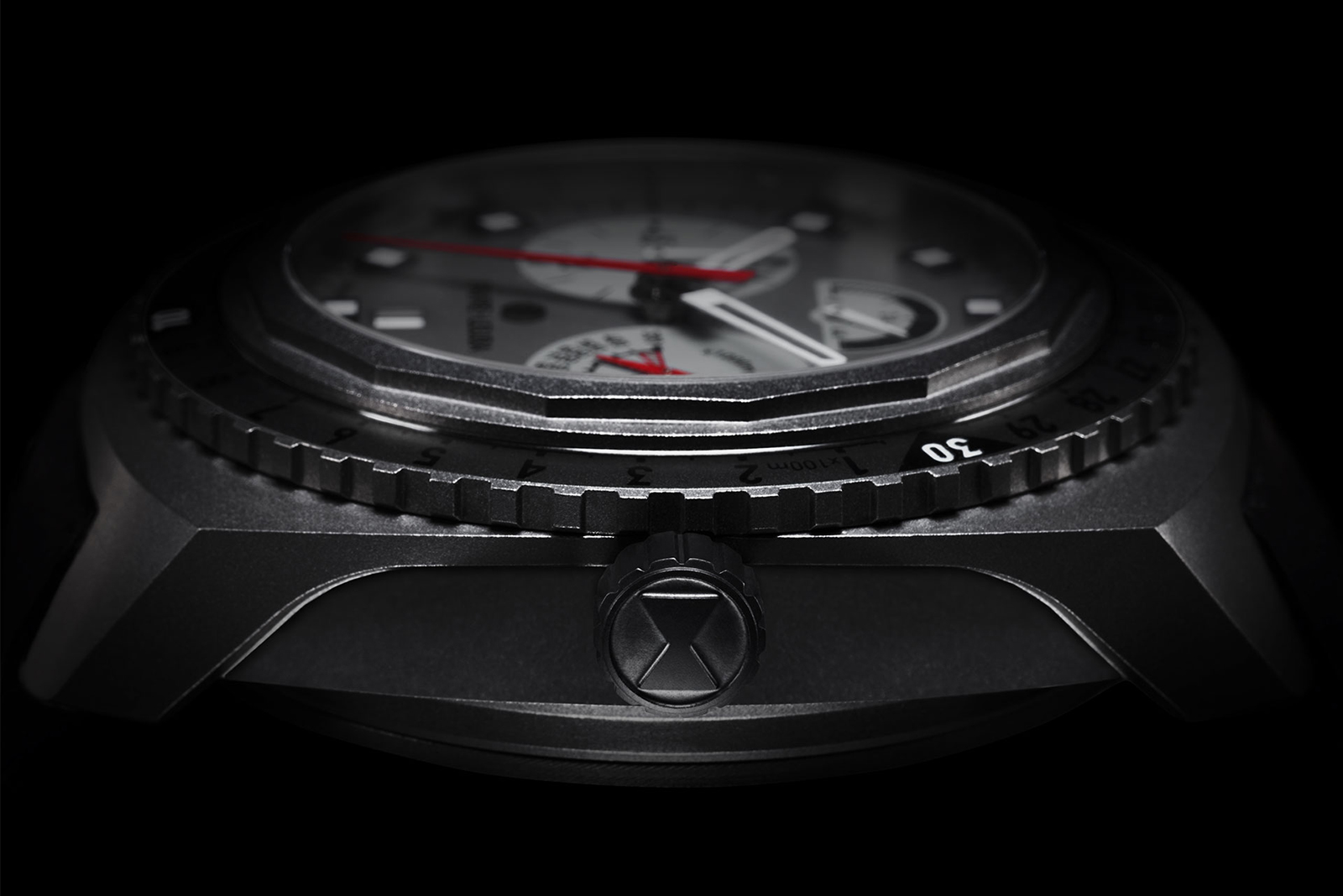 First off, the look. It’s certainly individual. Favre-Leuba describe is as ‘retro futuristic’ but that makes me instantly think of something like the Hamilton Ventura or original Omega Spacemaster, something that tried to predict the future and got it wonderfully wrong.

Aside from the grey on grey colour scheme, this is much more a standard sports watch. That’s not to diminish it at all – as it looks like what it is. The colour scheme is a little as described – but only a little. It mainly serves as a drab background for the bright red altimeter hands to stand out against.

The signature cushion-shaped case is the coolest design feature by far and, despite being a hefty 48mm still felt comfortable on me, mainly thanks to the titanium making it superlight. It looked a touch ridiculous but then it’s not the kind of piece you wear with a suit anyway. If you miss Jean Richard as much as I do, you owe it to yourself to take a look at Favre-Leuba. 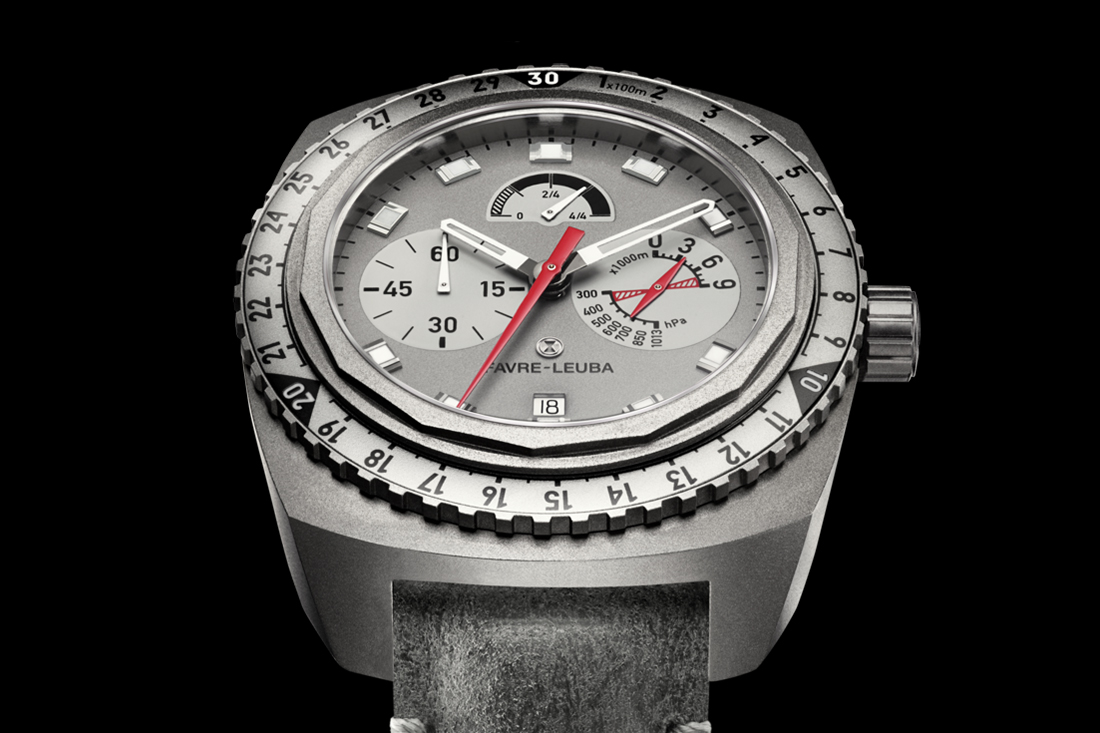 In the time I had it, I actually thought I’d give the altimeter a try. It’s the key feature after all and was originally, many, many years ago, one of the core premises of Favre-Leuba. As this was pretty much their relaunch piece, it would have been remiss of me not to try it.

I wasn’t about to climb a mountain though. Instead I did what Favre-Leuba ambassador and arctic explorer extraordinaire Pen Hadow suggested: I used it as a barometer. Essentially, zero it and you can make an educated stab at what the weather’s going to do.

The thinking is that, as it works off air pressure, if it starts climbing while you don’t, it shows the pressure is getting lower and so clouds are approaching. If it goes below zero, expect a bit of clear sky. I was amazed how accurate it actually was; more accurate than watching the weather report at least, though that’s not saying a huge amount. 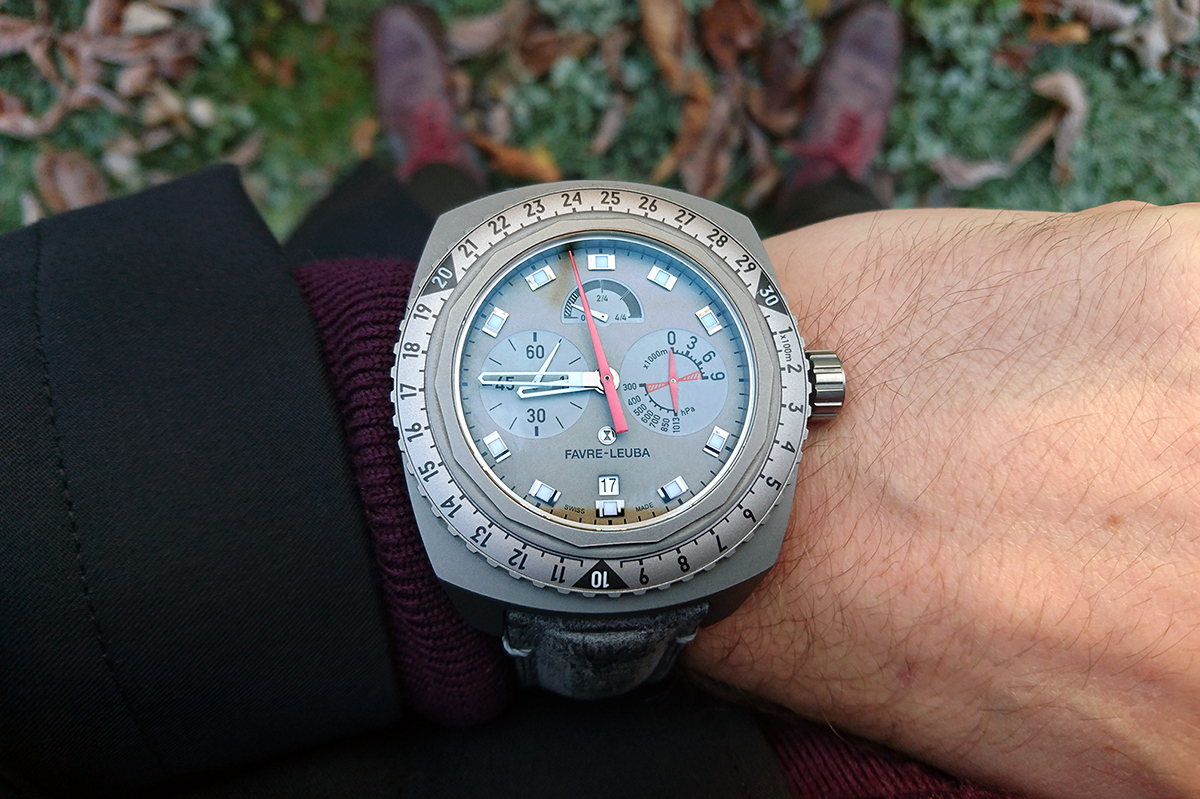 The Raider Bivouac 9,000 is a return to form from a brand that until this seemed to be floundering. Now I’m just eagerly waiting for their next release. Having seen a snapshot of the Depth Gauge already, it’s going to be one hell of a watch.

What to wear: Thanks to the 48mm case it won’t fit under all too many shirt sleeves and the style wouldn’t work even if it did. So, on the days you’re not in full-on climbing gear, keep things ultra-casual with worn jeans and a vintage tee.

Where to wear: The summit of Everest is ideal, though halfway up a cliff face is a good start; the Bivouac can certainly handle the occasional rock head-on. That said, Mr Hadow would most likely suggest somewhere lost in the arctic. I really wouldn’t.