There have always been close parallels between the worlds of motoring and horology, and it’s small wonder when you consider the similarities. Both are ultimately functional items which have to be the most precise and reliable they can be, something they achieve by embracing innovative materials and astonishing craftsmanship. Read on for our edit of the watches and the cars that have inspired them… 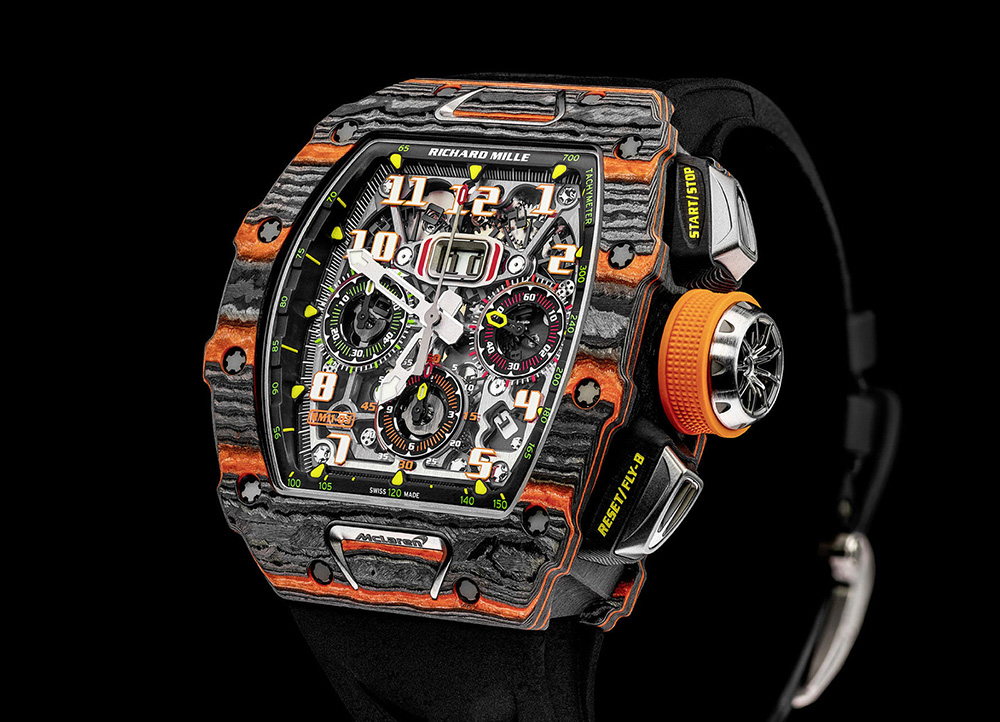 It was with great excitement that car and watch aficionados greeted the news that Richard Mille and McLaren were to present their first jointly-commissioned timepiece, and fortunately the RM 11-03 McLaren Automatic Flyback Chronograph, unveiled at the Geneva Motor Show, doesn’t disappoint. It’s the product of a close collaboration between McLaren design director Rob Melville and Richard Mille engineer Fabrice Namura, who share an interest in unique design and strong contemporary craftsmanship. 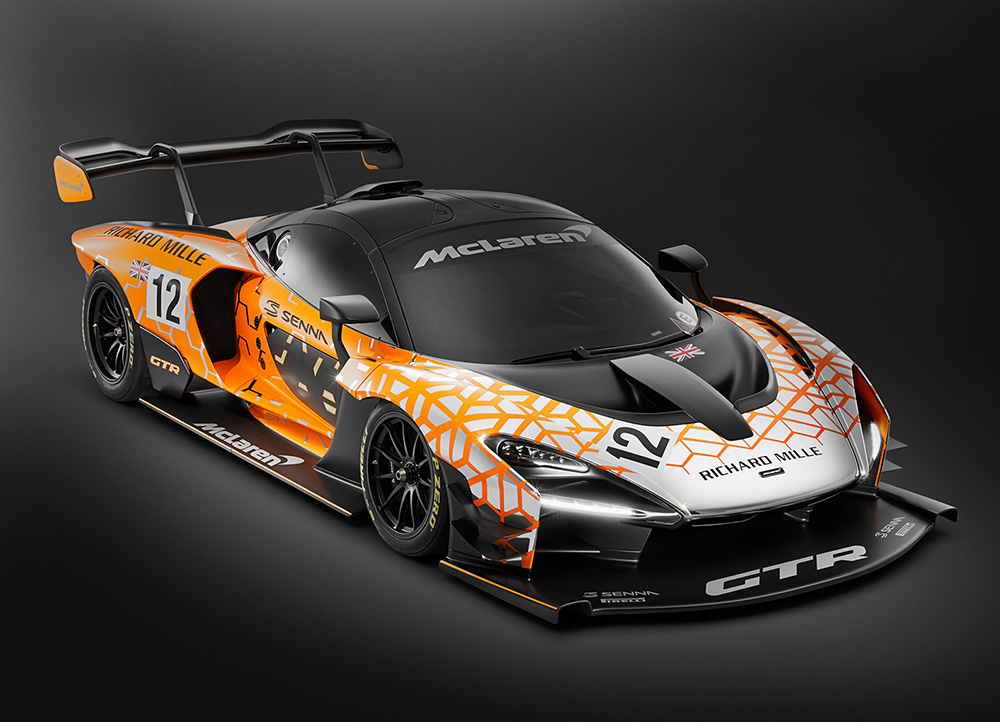 The resulting watch combines a super-light and resistant case made from Carbon TPT, with titanium pushers which call to mind the headlights on the McLaren 720S. The titanium inserts, a similar shape to McLaren’s F1 air-intake snorkel, decorate the bezel, while the titanium crown resembles the wheel. The automatic RMAC3 calibre with a flyback chronog raph at the heart is an impressive engine, giving a reassuring 55-hour power reserve and making this watch a driving force to be reckoned with; richardmille.com 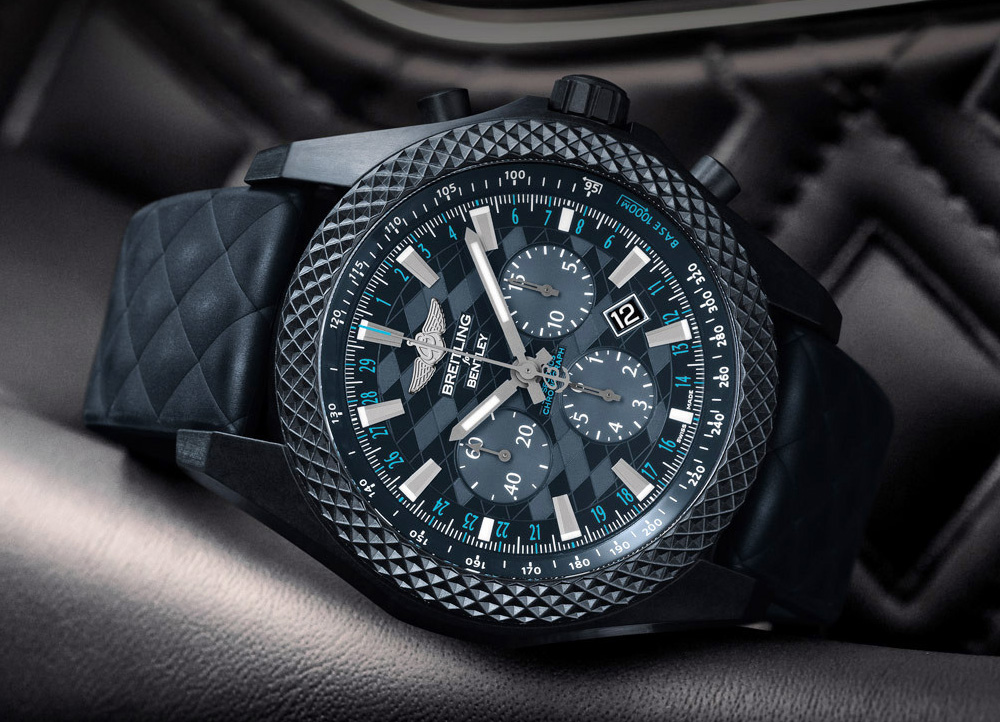 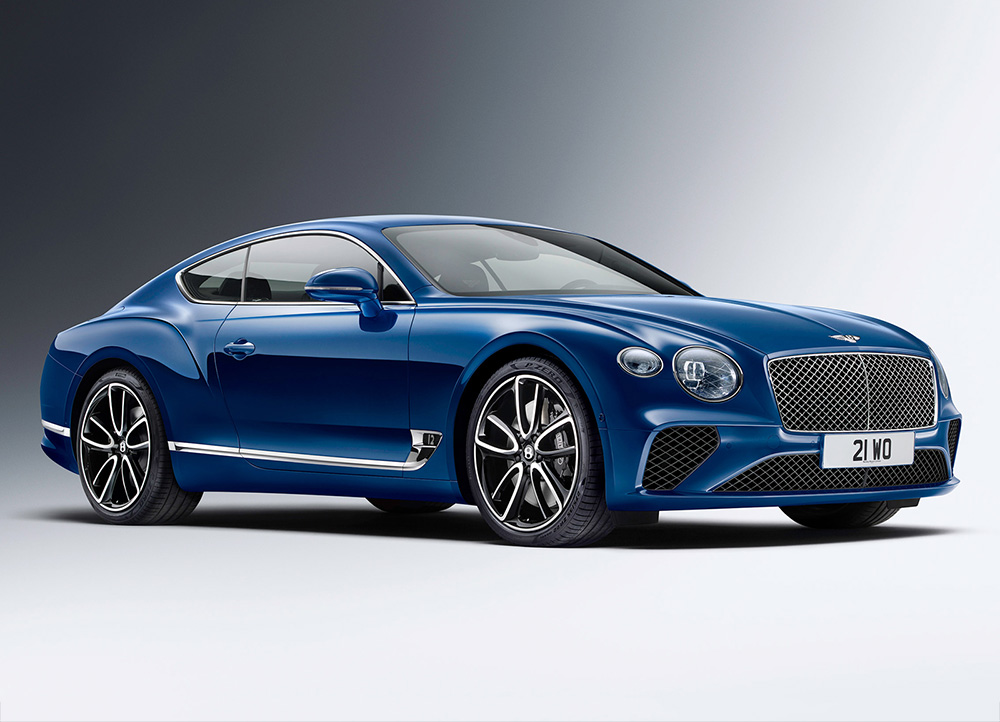 Taking its design cues from the Bentley Continental GT, the Bentley GT Dark Sapphire Edition brings together a light chassis with edgy bluish tints. Eagle-eyed wearers will be able to pick out the familiar diamond motif that appears in the Continental GT’s interior; breitlingforbentley.com 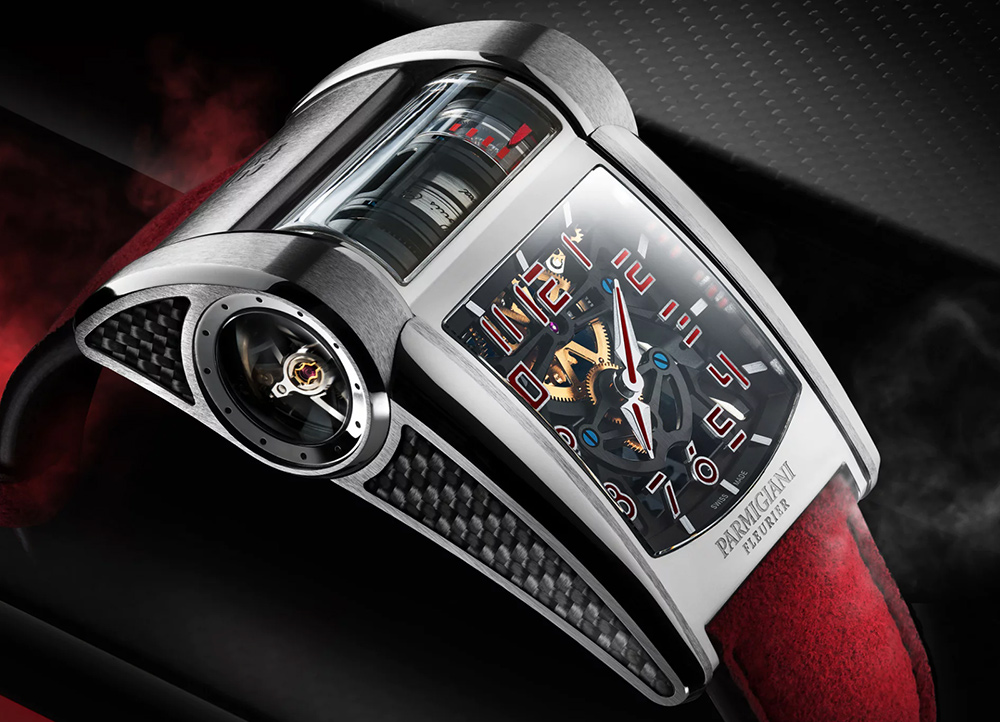 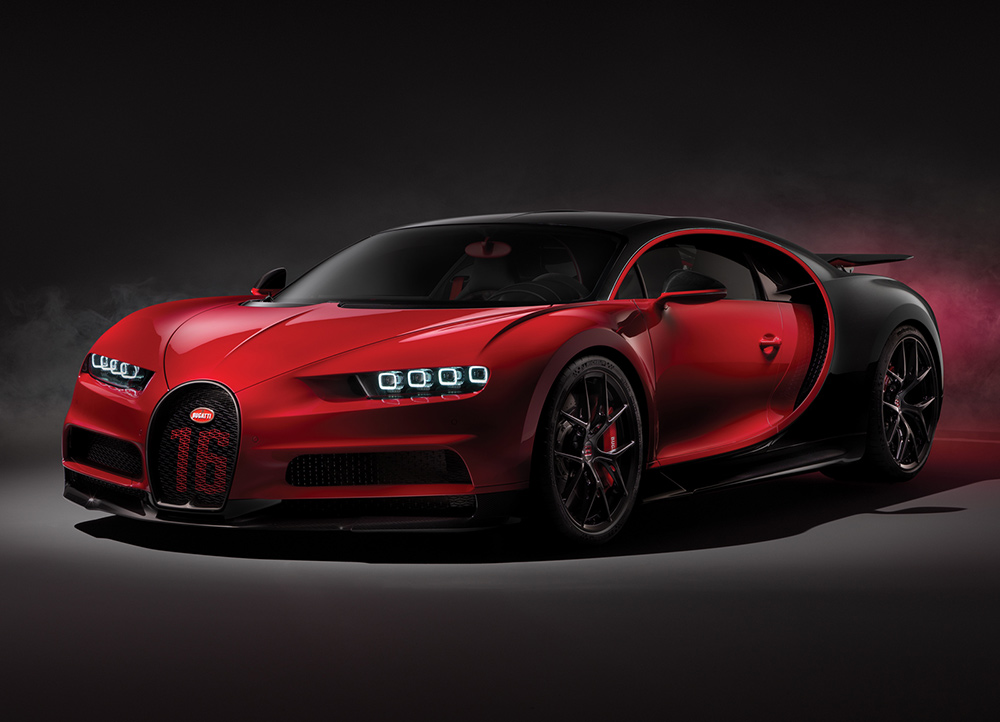 This special edition, created for the Geneva Motor Show, has an unusual tubular movement which makes for highly technical inner workings and its most user-friendly, readable display yet. Racing colours and a slick design make it a complementary partner to the Chiron Sport; frostoflondon.co.uk 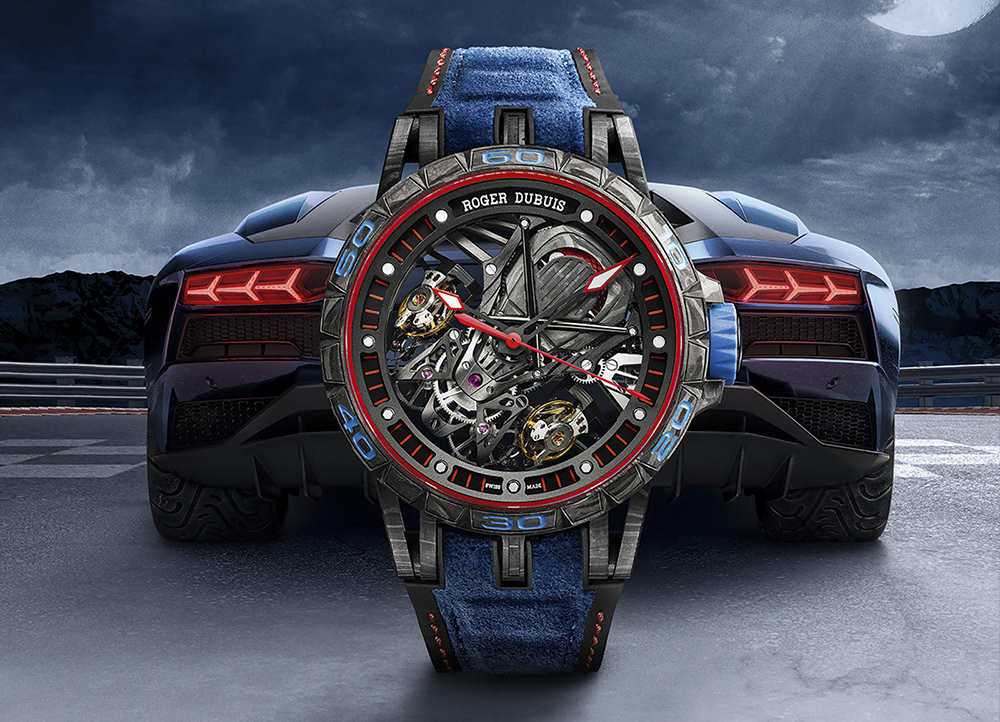 Roger Dubuis’ iconic Excalibur has once again pushed the boundaries with its latest edition. The newest Excalibur Aventador S is another result of the Roger Dubuis and Lamborghini Squadra Corse alliance. Crafted from the same C-SMC carbon used on Lamborghini cars, its movement also reflects the longitudinal placement of the engines, with a gentle incline of the double balance wheel; frostoflondon.co.uk 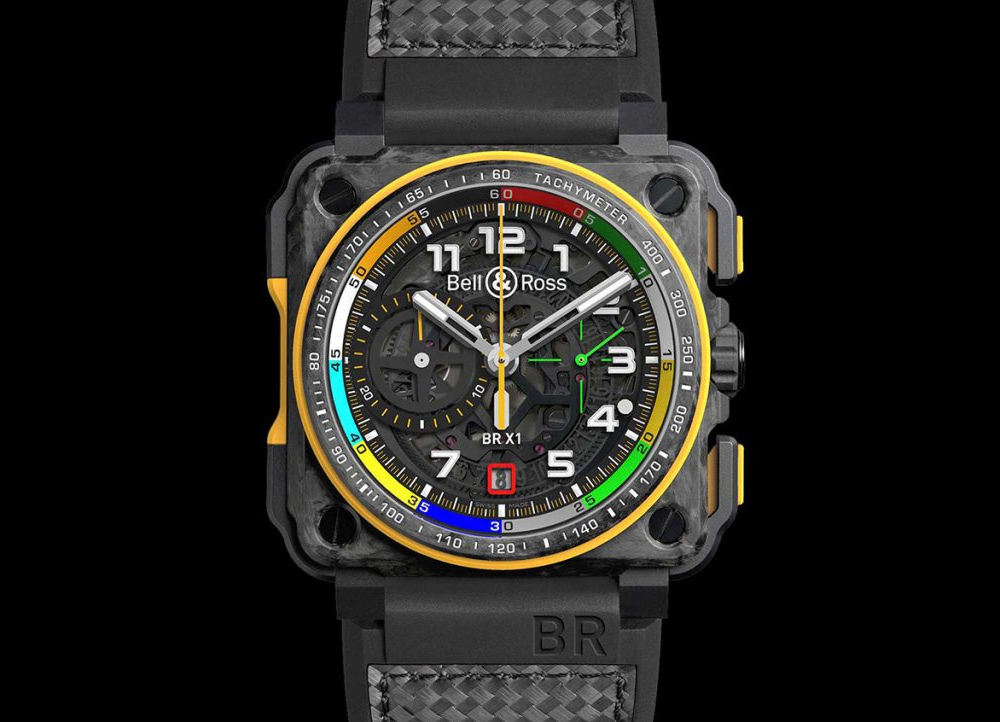 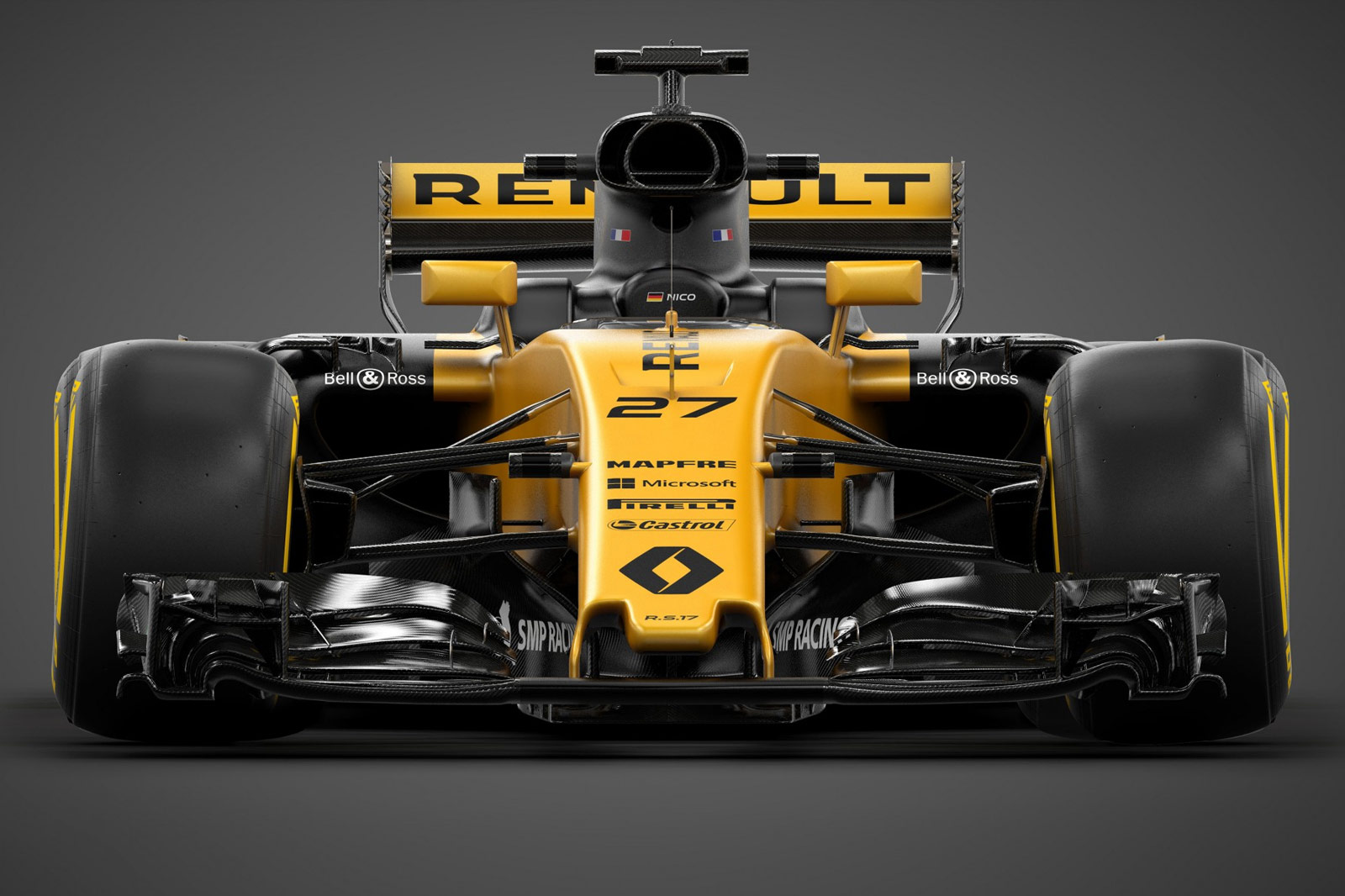 Bell & Ross’ aviation links are legendary, of course, but it wasn’t until 2016 that it also branched out into the field of motoring and became the official watch partner of the Renault Sport Formula One Team. With a design and colour that lets the watches be read quickly, it resembles a Formula One steering wheel, on which each piece of information is paired with a different colour; frostoflondon.co.uk 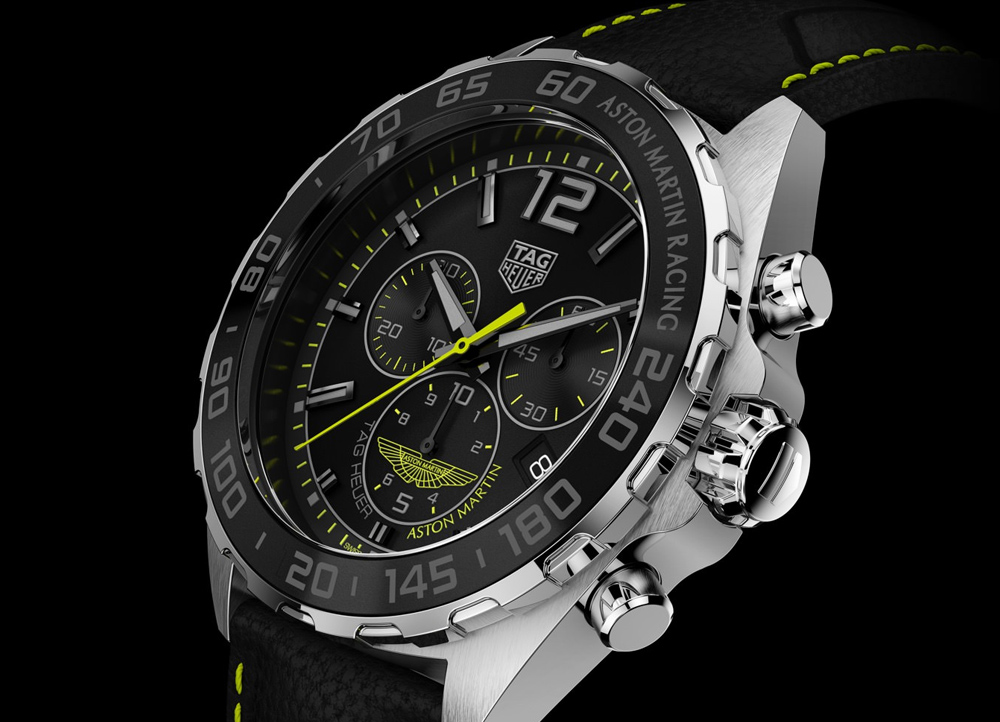 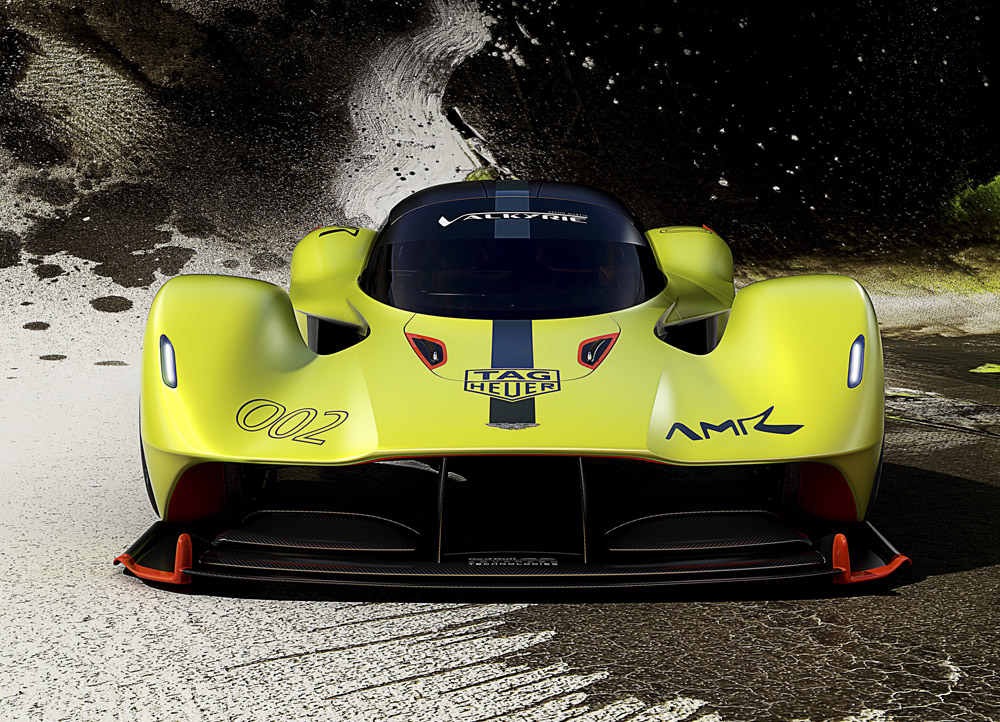 TAG Heuer’s partnership with Aston Martin was announced at the Geneva Motor Show as we were going to press, and we couldn’t neglect to include it. TAG already have an impressive motoring industry, but this new venture is the most exciting yet. The sporty TAG Heuer Formula 1 picks out Aston Martin Racing’s lime essence colour on the indexes, second hand and familiar winged logo; tagheuer.com

Partners in crime for some watch brands, it’s not a specific model that actually inspires them, but rather that of a motoring partnership, which lets them incorporate famous design details and maintain an adrenaline-fuelled aesthetic… 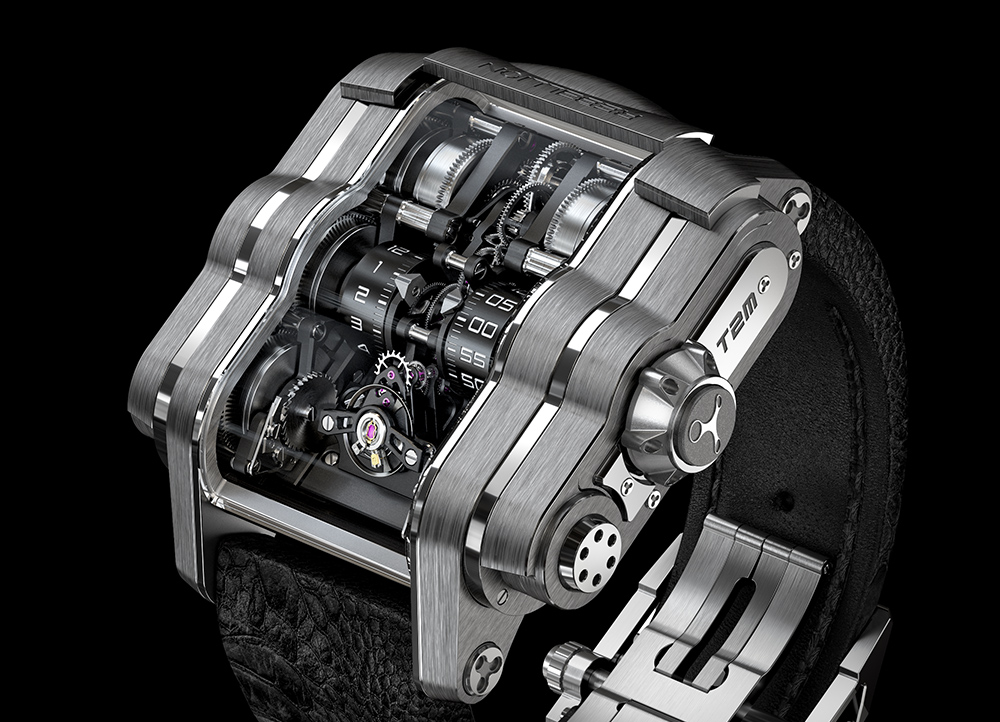 The new T2M from Rebellion, which pays tribute to automobile races, is pretty spectacular; indeed, it’s almost half watch, half car thanks to its futuristic design. Crafted from a single block of titanium that reveals its exceptional V8 ‘engine’ – which has eight cylinders – it has a 1,400-hour power reserve (that’s nearly two months!). Its gear system is practically identical to that of a racing car, too. With all this innovation, you won’t be surprised to hear it’s limited to just 10 pieces, all available for customisation; frostoflondon.co.uk 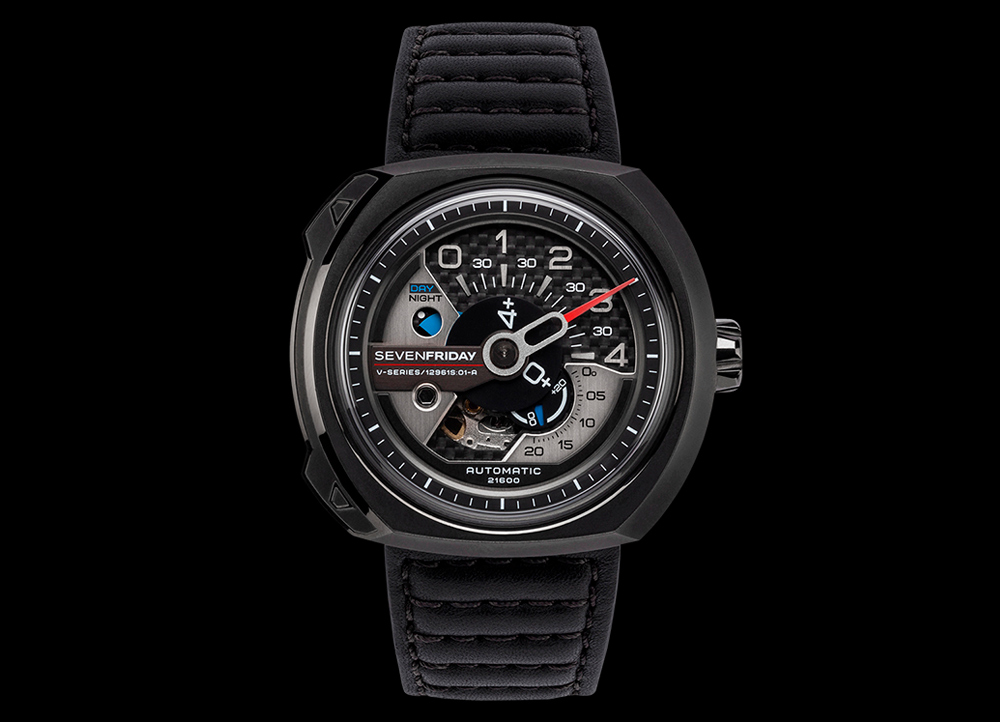 Part of the sleek Industrial Engines line, the SevenFriday V3-01 is inspired by the modern car industry. It’s all in the details, with a carbon look on the hours dial, a minute hand inspired by a speedometer and brushed steel details usually seen on a car’s pedals and gear shifter, all adding a racing edge; frostoflondon.co.uk 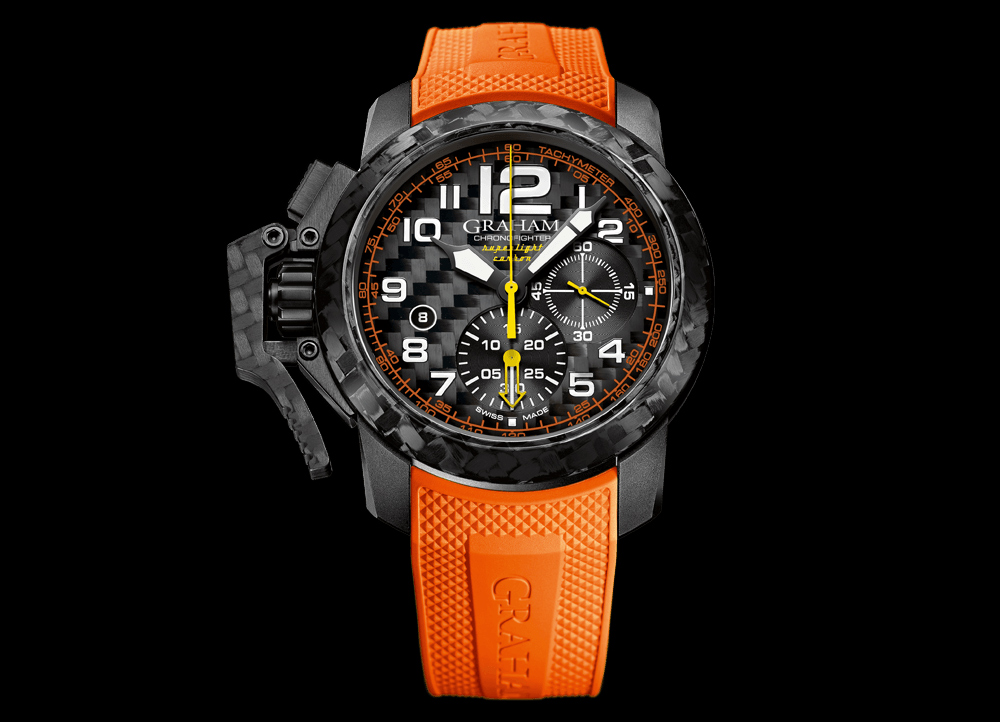 It’s only appropriate that Graham has been inspired by brightly-coloured Formula One tyres for the Chronofighter Superlight Carbon watches, as the brand has been an avid sponsor of events in the motoring world since they backed the Brawn GP Formula One team from 2009 to 2011. Weighing in at less than 100 grams each, these watches live up to their name by incorporating the carbon that’s become the hallmark of a Formula One car in the case, trigger, bezel, dial and buckle; frostoflondon.co.uk 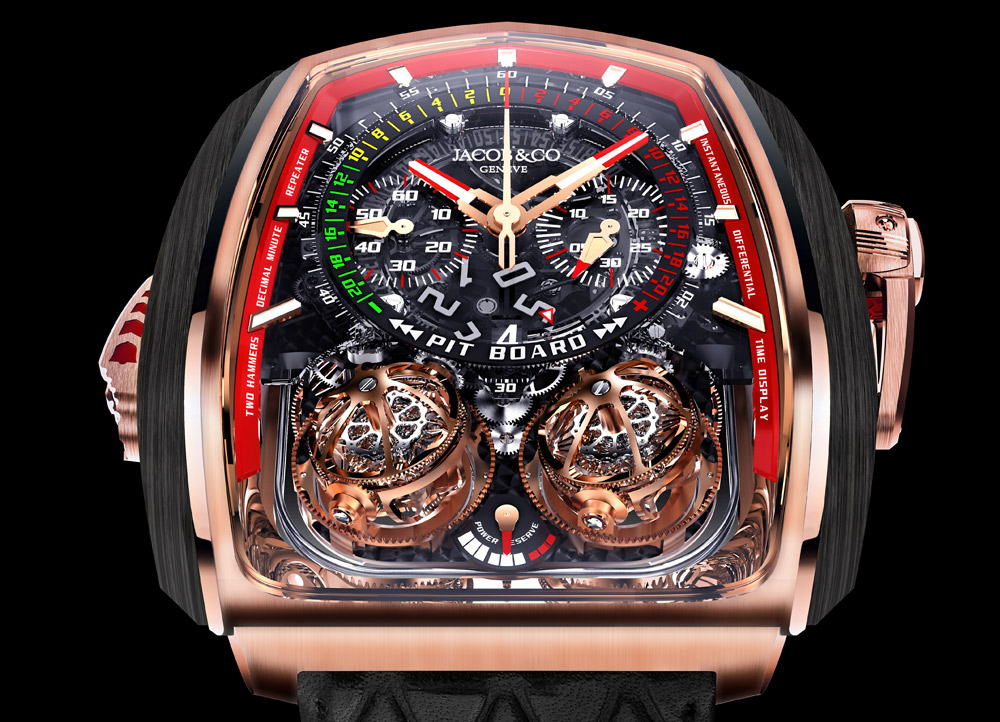 A rework of 2016’s original Twin Turbo, this new model adds a chronograph function which makes it more precise than ever. The reference time indicator, inspired by the timekeeping panels in motor racing, is both useful and adds some sporting cool; frostoflondon.co.uk 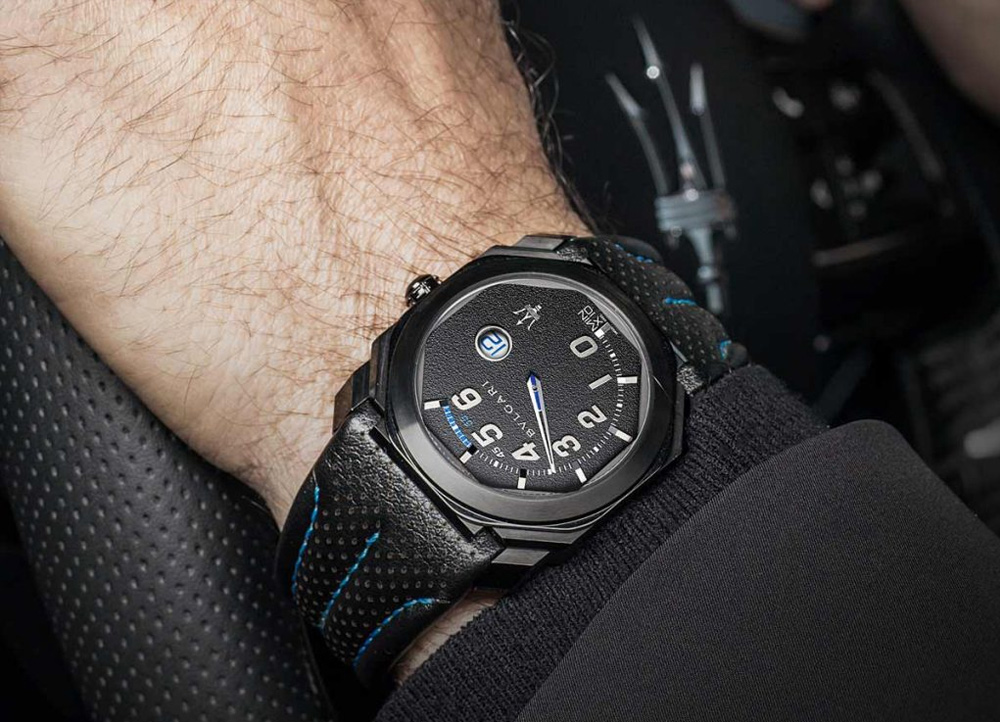 Bulgari and Maserati’s partnership has been going strong since 2012, and it’s no wonder – the two luxury Italian brands perfectly complement each other. The two newest Octo Maserati models, the GranSport and GranLusso, remain faithful to the aesthetic codes of Maserati cars, with a dial which recalls the rev counter setting of the instantly-familiar structured case. Special order from frostoflondon.co.uk